How will WCW straighten out the chaos surrounding the World title? Can the Steiners retain the World tag team titles? Who will win Mongo-Goldberg II? Will Ultimo Dragon retain against Guerrera? Let’s find out in the DEBUT episode of Thunder! 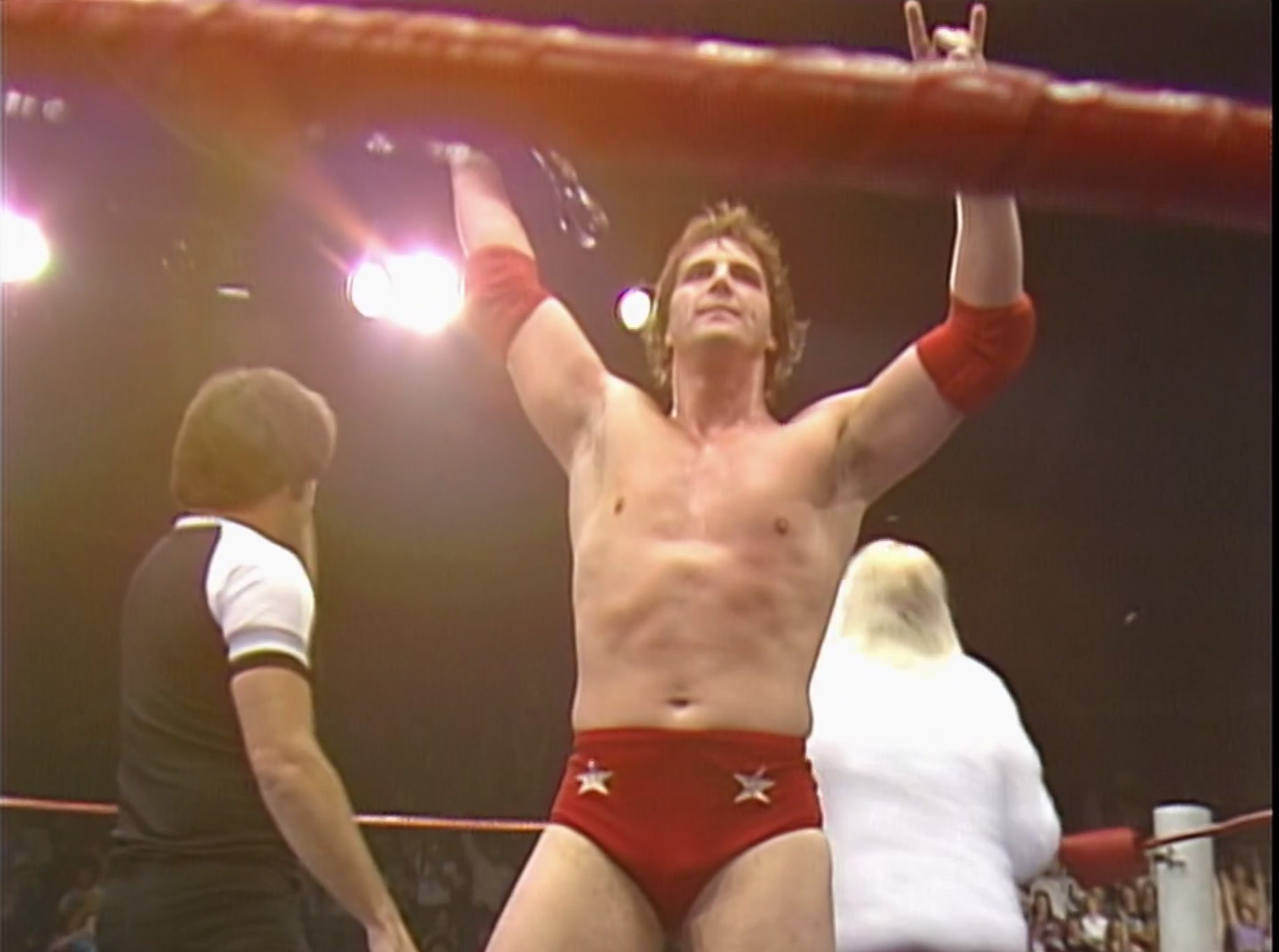 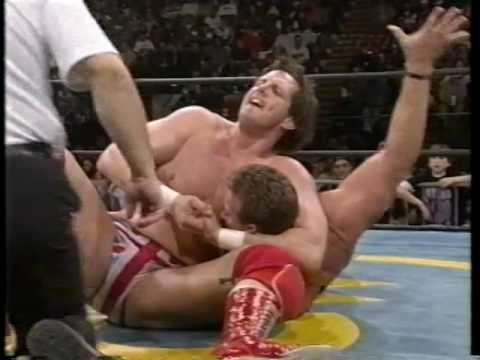 "Hollywood” Hogan and Eric Bischoff head to the ring. As he refers to the show as “nWo Thunder,” Hogan claims to be “too darn tan.” Considering Hogan just renegotiated a new contract, he’s here “for life.”

Check out WCW Saturday Night. I mentioned the upcoming battles in my Nitro reflection.

At the entrance, “Iron” Mike Tenay interviews Chairman of the WCW Executive Committee JJ Dillon. Cementing Lambros’ declarations, Dillon reverses the decision of the first match and deems Savage the winner by DQ. Immediately, Luger joins to air his grievances in his fight against the nWo. 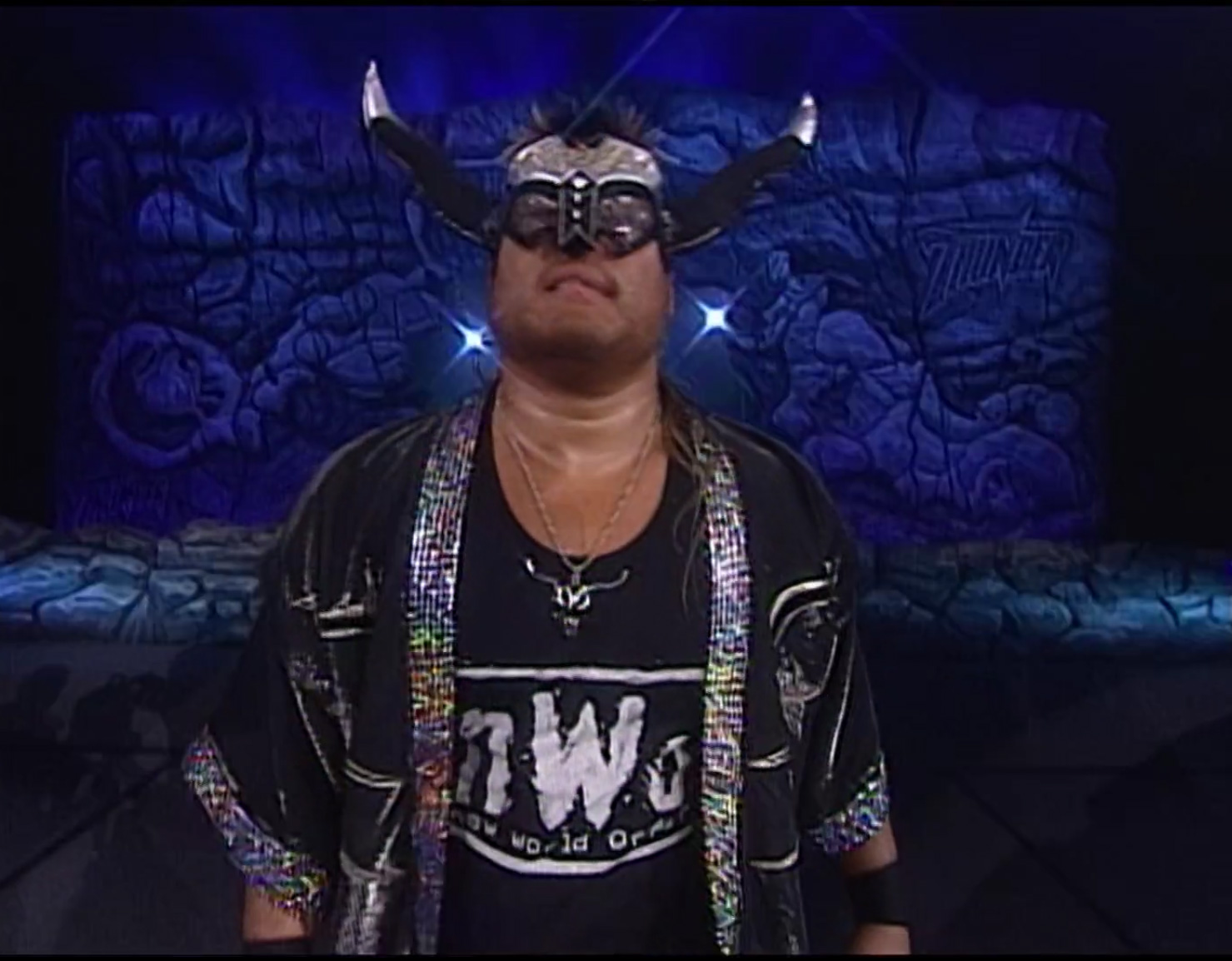 Prior to the next match, Jericho is “embarrassed” by his behavior and apologizes again to ring announcer David Penzer.

Summary: Jericho got a few chances to shine but succumbed to the sheer will of the “Nature Boy.”

After the match, Jericho rips Penzer’s jacket and throws a temper tantrum.

Prior to the next match, Schiavone shilled a dream match between Bret and Flair at Souled Out on 1/24.

Summary: Much better effort than the Starrcade match.

Summary: The nWo was mere fodder for the champs, but I smell a disturbance between them.

According to Schiavone, Scott Steiner was fined. More on this later.

We then revisit Starrcade ‘97 and the match between Bischoff and Larry Zbyszko. Check out my reflection to get my $.02.

Back in Daytona Beach, Tenay interviews Zbyszko who will face Scott Hall at the PPV. In his own unique fashion, Zbyszko cuts a promo on Hall.

Prior to the next match, we revisit the 9/8/97 episode of Nitro when the nWo humiliated Traylor.

Summary: More storyline than match as the distraction finish indicates.

Prior to the next match, we revisit Nitro from this past Monday when Guerrera defeated Psicosis to earn the upcoming title shot.

Schiavone elaborates about Scott Steiner’s fine stemming from Nitro when Scott allegedly slapped the referee. Although that never happened, I’m certain that the fine was for the expletive that made air. Schiavone mentioned that the fine is $5000. Wow! 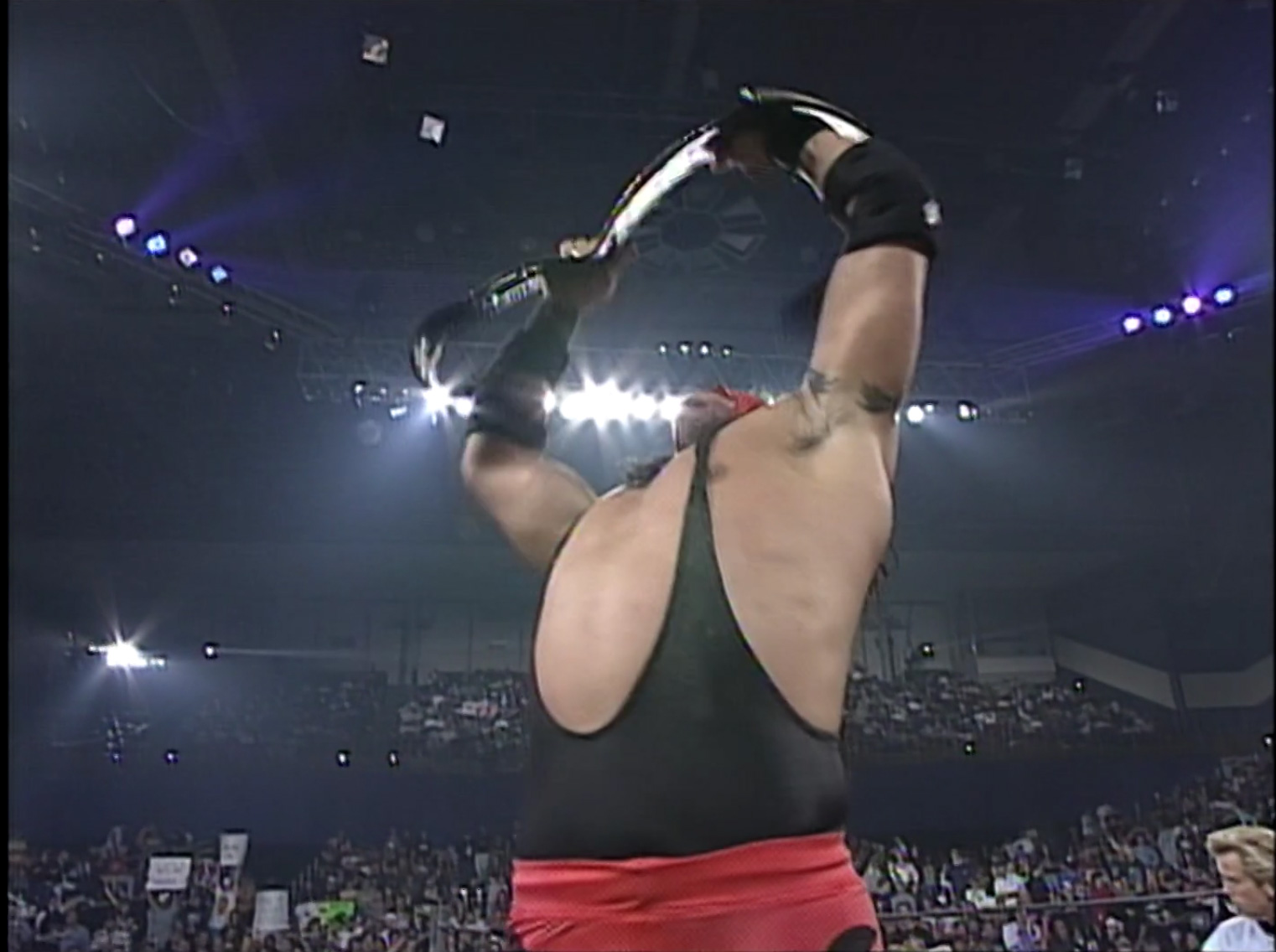 In the ring, Tenay interviews Bret who respects Flair and his accomplishments. Flair approaches the ring and requests Bret use his catchphrase again. While Bret complies, he says he’ll “prove it.” Flair doesn’t believe him and takes exception. Not too swiftly, Bret uses Flair’s catchphrase against him. Ultimately, Flair gets the last word while Bret leaves.

Afterward, Bagwell tries to attack Luger but gets Racked too. Savage attempts to hammer Luger with a chair, but Luger drops Bagwell atop him.

We then revisit Starrcade ‘97 when Sting “defeated” Hogan and became World champion. Click the link above to get my view of this debacle.

Following a commercial break, we revisit the 12/29/97 episode of Nitro for the rematch for the World title. After Sting hits Stinger splash #2 that knocked referee Randy Anderson silly, he applies a Scorpion death lock. Despite being suspended earlier in the show, referee Nick Patrick returns, makes Sting break the hold, and tries to escape. Sting’s none too pleased with Patrick and brings him back the hard way.

Allegedly, Hogan loads his fist with a foreign object and nails Sting with it. While hooking the tights, he rolls up Sting, and Patrick counts 3. As Patrick retrieves the World title belt, Sting dropkicks Hogan and clotheslines Patrick. With Anderson back in charge, Sting reapplies a Scorpion death lock. Hogan submits, and Sting retains. In my eyes, this is yet another convoluted mess. 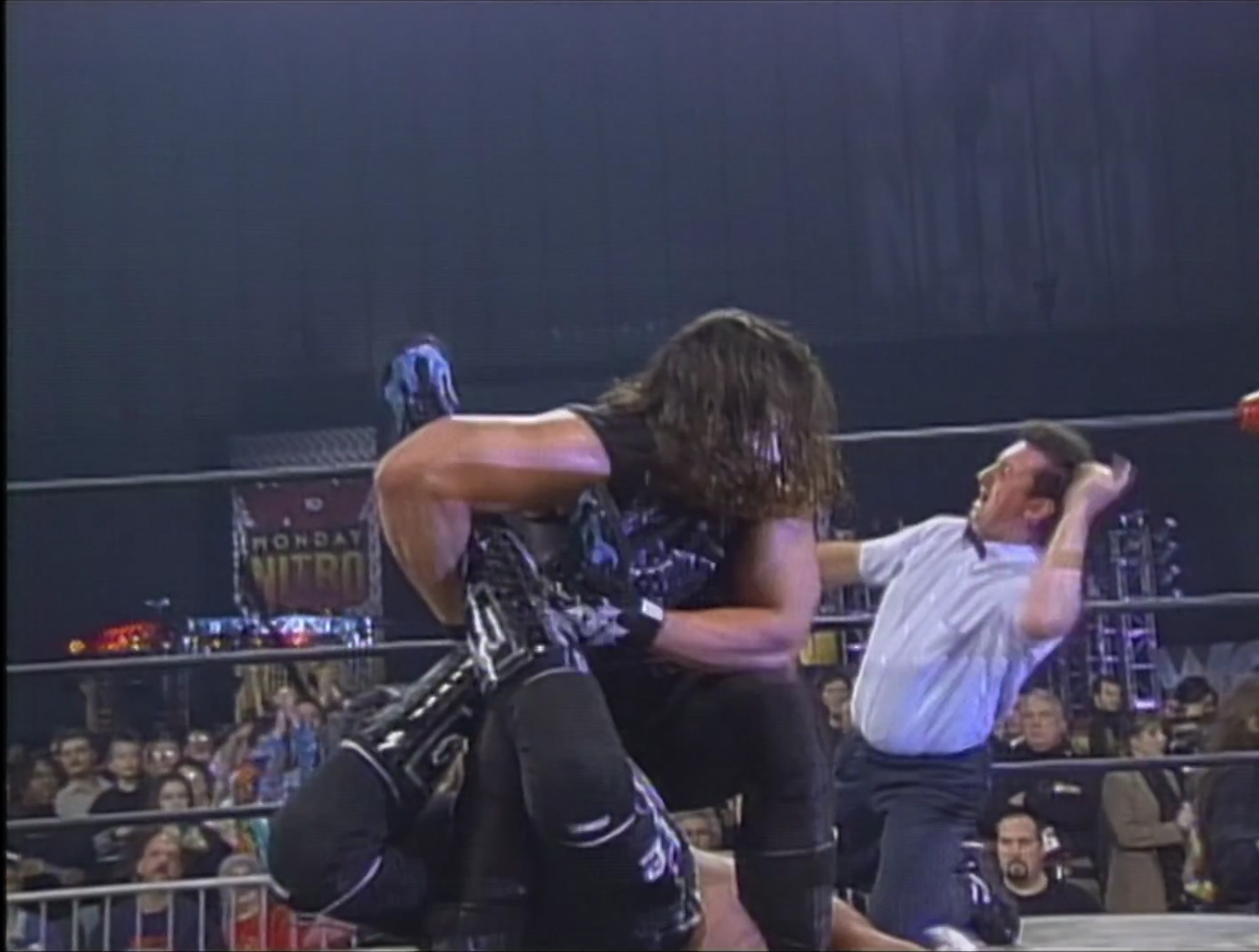 After the match, Dillon comes to the ring and offers Sting the World title belt. Not to be outdone, Bischoff interjects with a tug-o-war against Dillon for the belt. When Bischoff kicks Dillon, Sting grabs and supplies him with a Scorpion death drop. The nWo storms the ring and beats down Sting until Bret comes to Sting’s rescue. More reinforcements from WCW hit the ring to even the battle. At that point, the show ends.

Back in Daytona Beach, Tenay interviews Dillon again. Dillon requests Hogan approach the ring, and the nWo answers. Next, he requests Sting join the mix, and Sting appears while wearing the gold. Dillon declares the title is vacant until further notice. Upon Dillon’s request for the belt, Sting reluctantly tosses it at Dillon’s feet while the Daytona Beach faithful vehemently object. Sting tells Dillon that he has “no guts” and Hogan that he’s “a dead man.”

HOT TAKE: WCW backed itself into a corner, and this was the only way to clean up the mess.

Summary: Despite the clean victory on Nitro, Thunder opens with a main event schmozz.

After the match, Nash lands a big boot, and Giant saunters toward him. When Giant enters the ring, he battles with Nash while Thunder leaves the air. 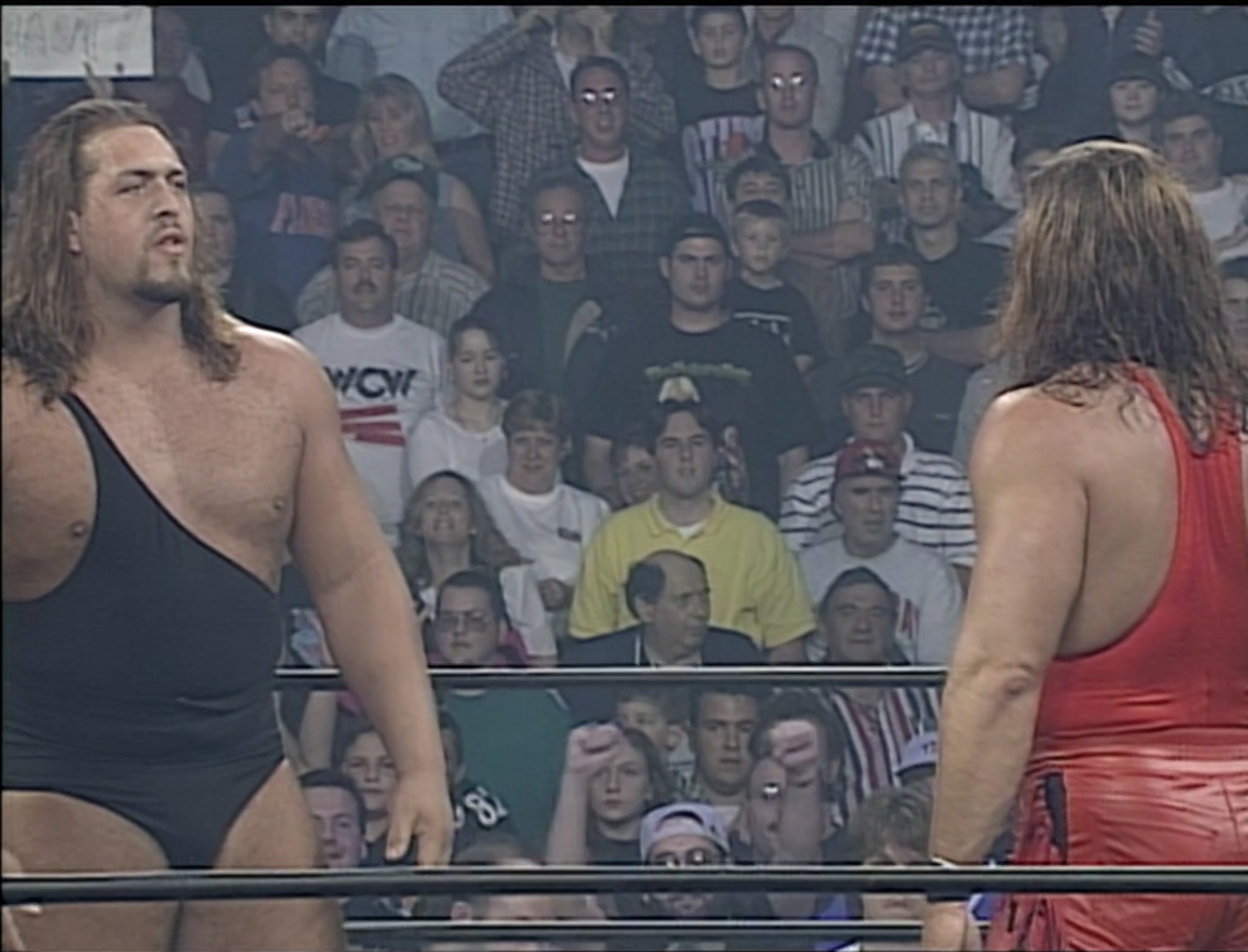 Conclusion: Although I understand the multiple-step process to fix the mess from Starrcade ’97, holding up the World title belt creates more questions than answers. Perhaps Nitro will fill in some blanks. Also, Guerrera wins his first Cruiserweight title as Savage and Luger are at each other’s throats. In addition, the Steiners remain World tag team champions, but how long will they continue to be a team?

Finally, two matches have been announced for Souled Out ’98. Let’s hope WCW doesn’t disappoint us again.

Quite the debut, but how do you follow it?