Summary: Solid opener, but I’d bet that Malenko was sidetracked by his glorious family news.

Scott Hall comes to the ring and conducts his survey. To say DC is a WCW city would be putting it mildly. When he brings up the topic of the main event, Hall mentions that he faces “the winner” at SuperBrawl VIII in February. Keep that in mind.

Match 2 (battle of the Giants): Kevin Nash versus Giant

Summary: The result of this match reeked of politics as Savage used his stroke not only to change the outcome of the match but also get the pin himself. Originally, the Steiners and Traylor were supposed to win, and Scott was none too pleased about having to job. After all, he’s a World tag team champion.

At the entrance, “Mean” Gene Okerlund shills the hotline and interviews the chairman of the Executive Committee JJ Dillon. According to Dillon, Nick Patrick will be the referee for the main event. That becomes important later.

Summary: While the match told a good story, the lack of experience between them was GLARING.

Raven comes out and chooses not to wrestle tonight. Instead, we get Saturn. 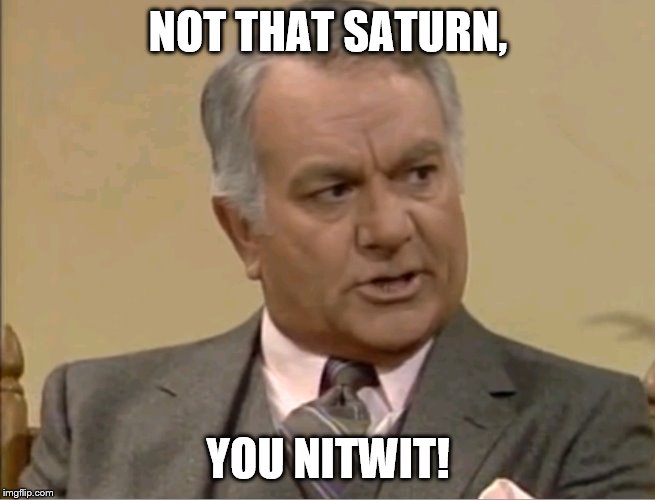 Summary: The no-DQ stipulation served to only benefit Saturn with the Flock’s interference. Ultimately, it led to Saturn’s victory much to the dismay of the paying customer.

Summary: If there ever was a match where five fewer minutes and a better finish was needed, it’s this one.

Why in the BLUE HELL are all the heels going over during the biggest show in WCW history? Who booked this crap?

After the match, Elizabeth bounces down to the ring to assist Savage.

Match 7 for the WCW US title: Curt Hennig (champion) versus Diamond Dallas Page 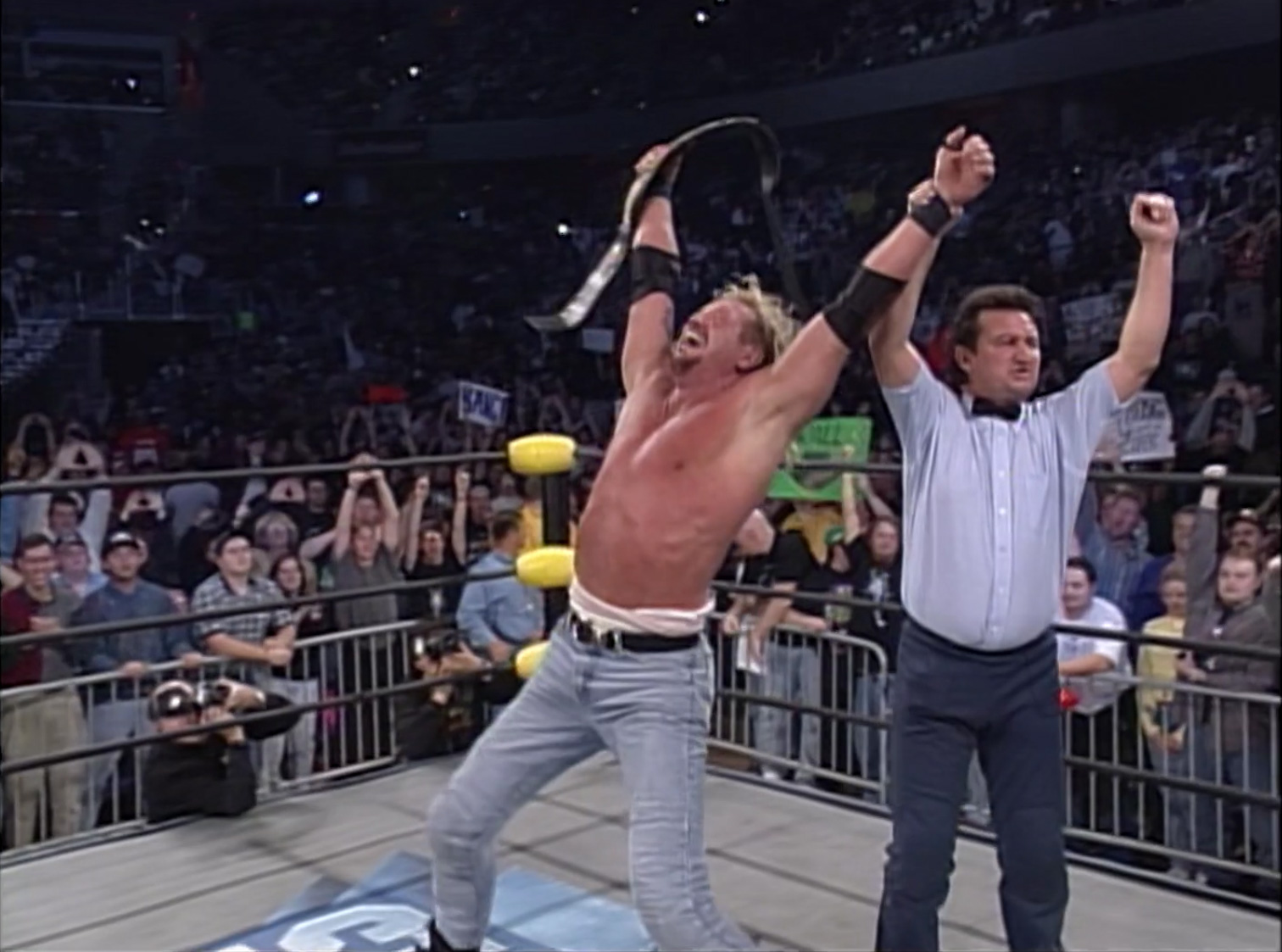 Summary: If there was a time to give DDP a title, this show was the appropriate time. Great job, DDP!

At the internet table, a showered and victorious Eddie Guerrero chats with Mark Madden. Get it all at wcwwrestling.com. For all of the computer geeks out there, Jeff Katz’s laptop has a PARALLEL port. I’ll bet the minds of the millennial portion of my RSG-ites have been blown. 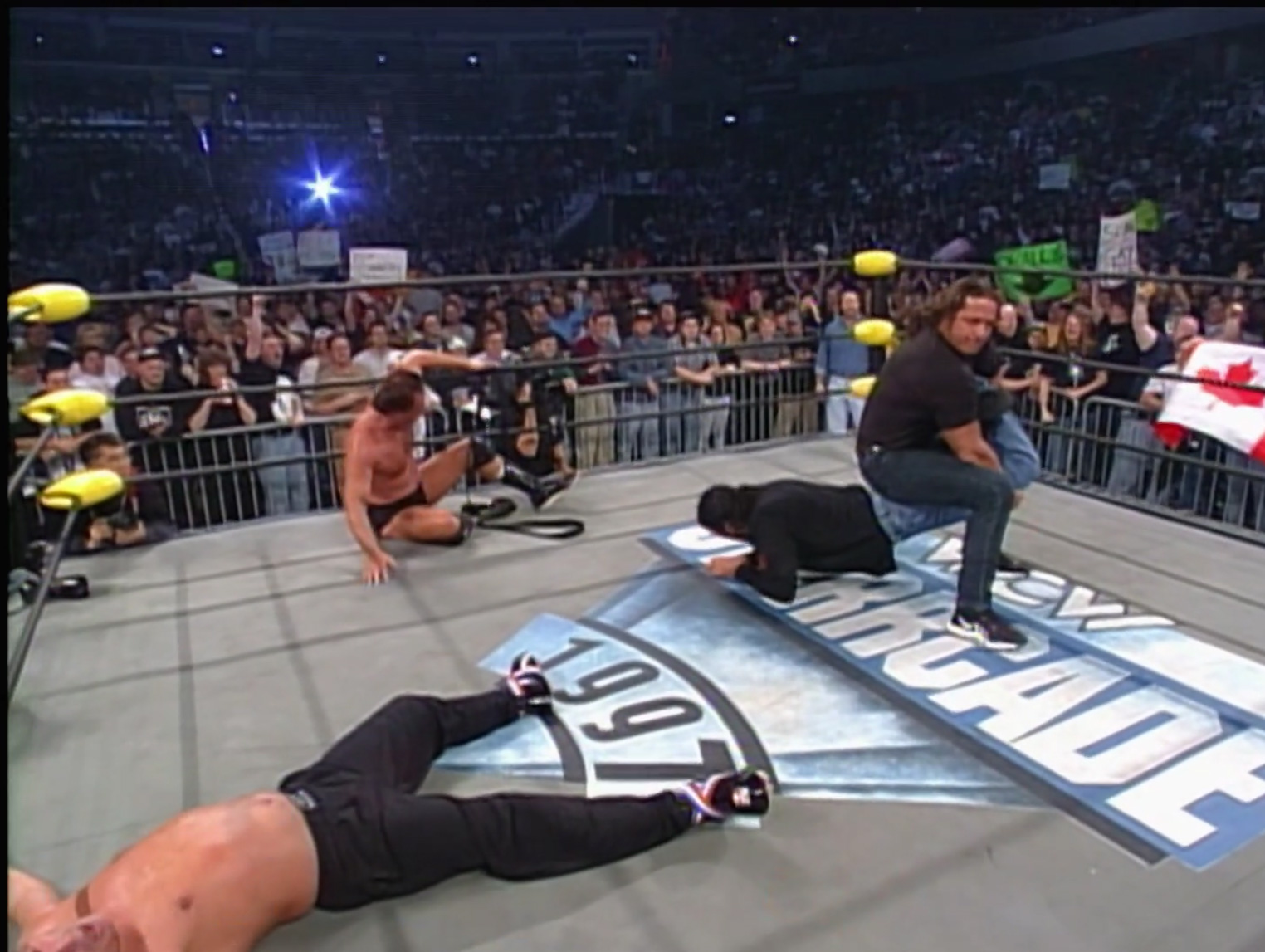 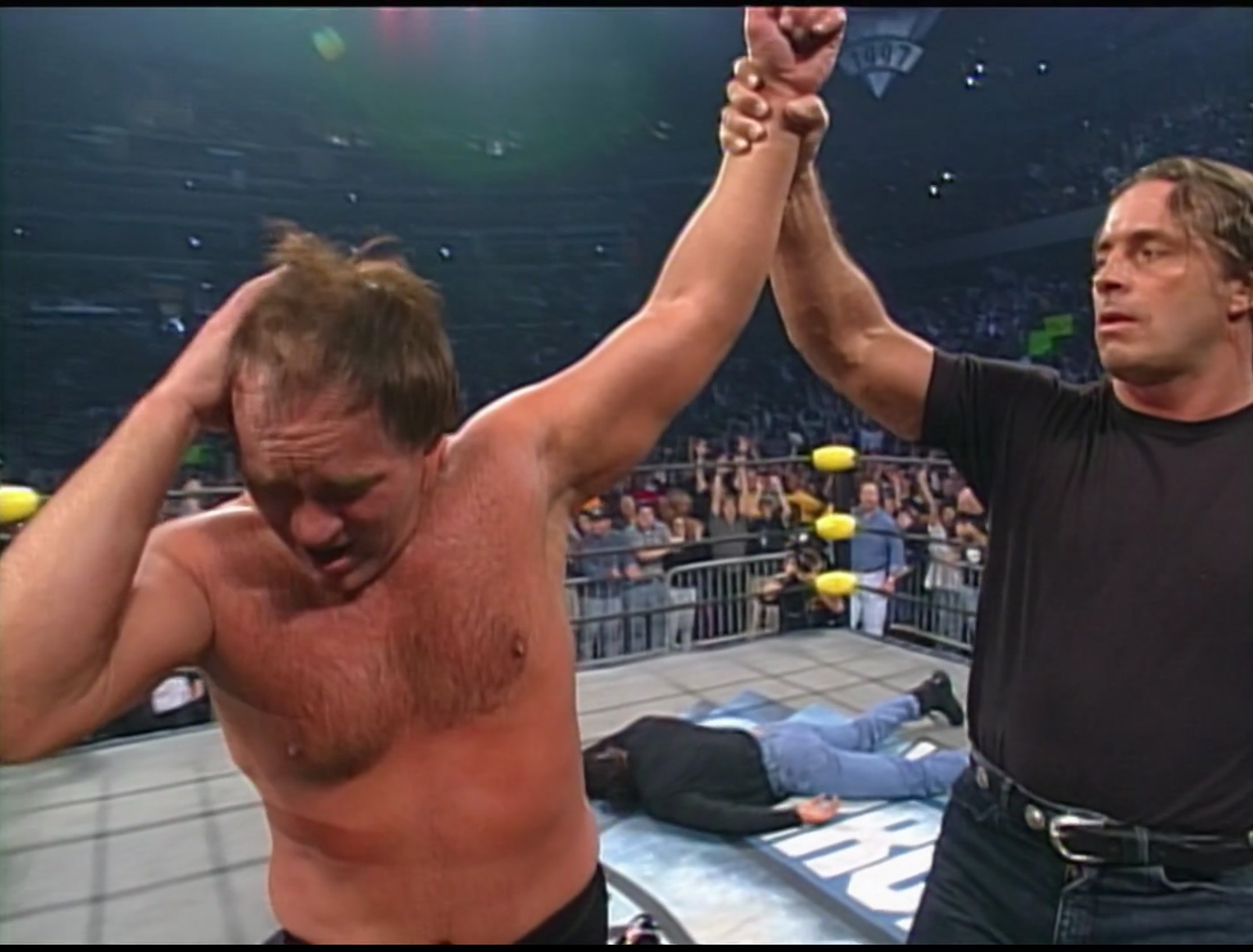 Summary: Sports-entertainment at its finest meaning that it wasn’t a wrestling match so much as it was an entertaining spectacle. The foreign object botch ruined the finish as Bret was supposed to notice it after Bischoff’s victory and reverse the decision.

According to reports, Bischoff had FRACTURED his patella in training, so kudos to him for working the match and taking a licking. Having said that, with the convoluted finish, I believe the misstep that was nWo Monday Nitro affected the finish. Yes, a Bischoff victory seemed unfathomable, but if nWo Monday Nitro had been a success, it would have happened thanks to Hall’s interference.

After the match, Schiavone is ECSTATIC that WCW has retained Nitro thanks to Zbyszko. WCW matched nWo at 2-2. What will happen in the main event to break the tie? 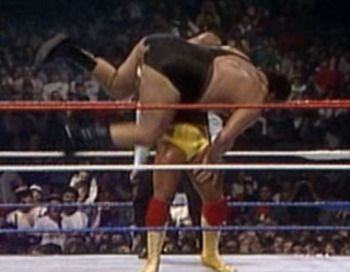 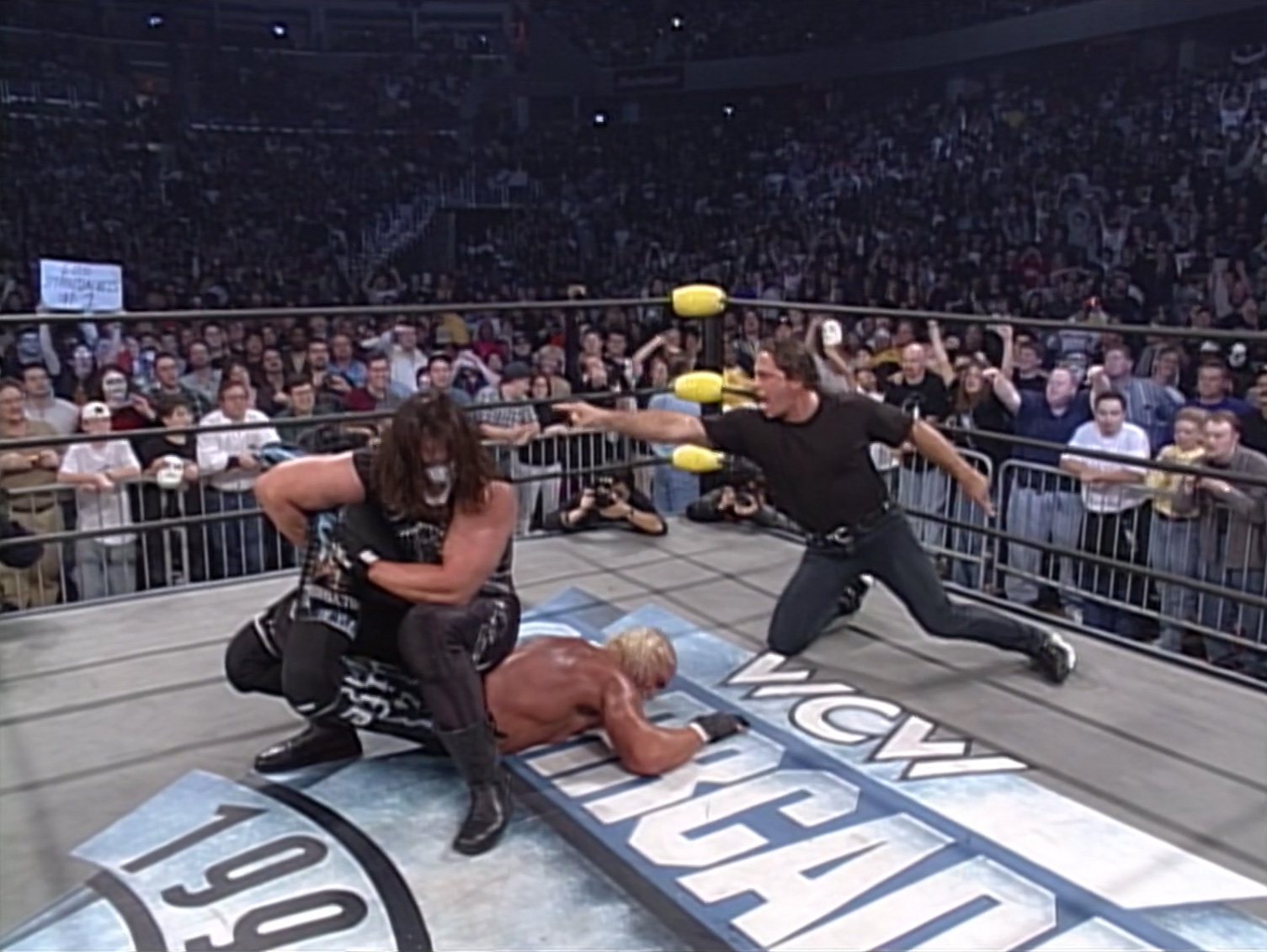 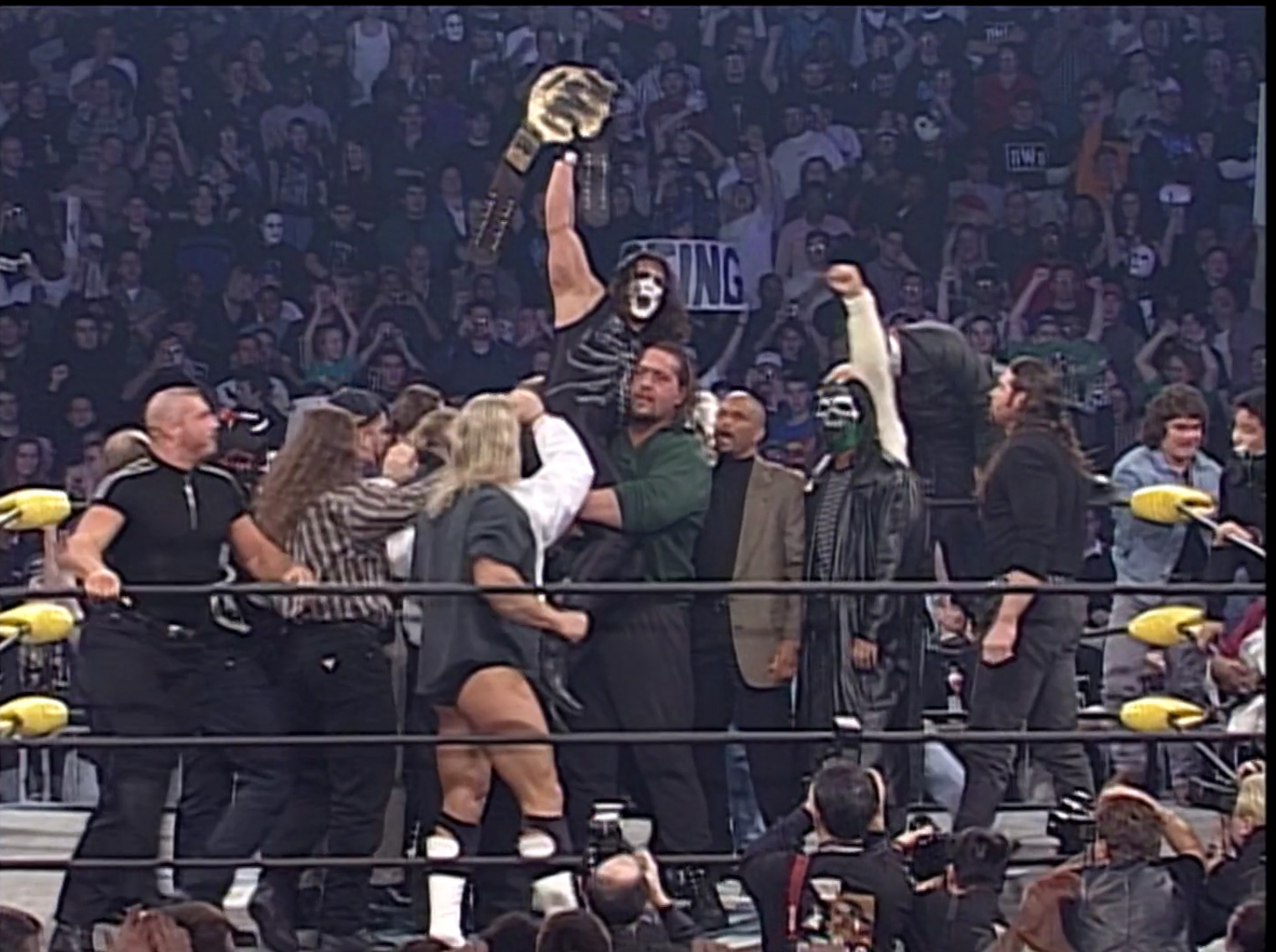 Summary: It shouldn’t have happened this way. More on this following the aftermath.

After the match, a host of WCW wrestlers storm the ring to congratulate Sting. While “Hacksaw” Jim Duggan, in a tuxedo, waves the American flag sitting atop the far right turnbuckle, Bret waves the Canadian flag in the far left. Sting then speaks to the camera punctuating it with a “mamacita.”

Let me try to explain this...it was NOT the finish we anticipated.

Furthermore, I’ve not read every Starrcade ‘97 review available nor would I rebook this show. However, despite Hogan and Bischoff’s reluctance to give Sting a strong finish due to his “lack of enthusiasm, physique, demeanor, etc.” they had an obligation to the consumer to put Sting over strong. Obviously, that didn’t happen. Fans have wanted to blame Hogan, but Bischoff went on record for taking responsibility. Thanks for stepping up, but this was a colossal screw-up.

As an addendum, after EVERYTHING WCW did for him on nWo Monday Nitro, Hogan still did what’s best for him and not WCW.

Conclusion: This show should be remembered for all the right reasons. Throughout 1997, the nWo has run roughshod all over WCW, and this show would turn the tide. Instead, poor booking decisions and a reworked last-minute change to the finish of the main event define this show.

While WCW could have distanced themselves greatly over the WWF which was still in repair mode after Survivor Series ‘97, they instead catered to a WWF storyline by building upon it and making the WCW World title less prestigious.

With the amount of wrestling fans who witnessed this show live and on replay, WCW did us a disservice to us all with this show.