Live from Indianapolis, IN

Can Savage regain the WWF title from Flair? Will Bret recapture the IC title from Piper? What's the deal with Sid? Let's find out!

While Monsoon attempts to describe the upcoming matches, Heenan's trying to spot pictures of Elizabeth promised by Flair. 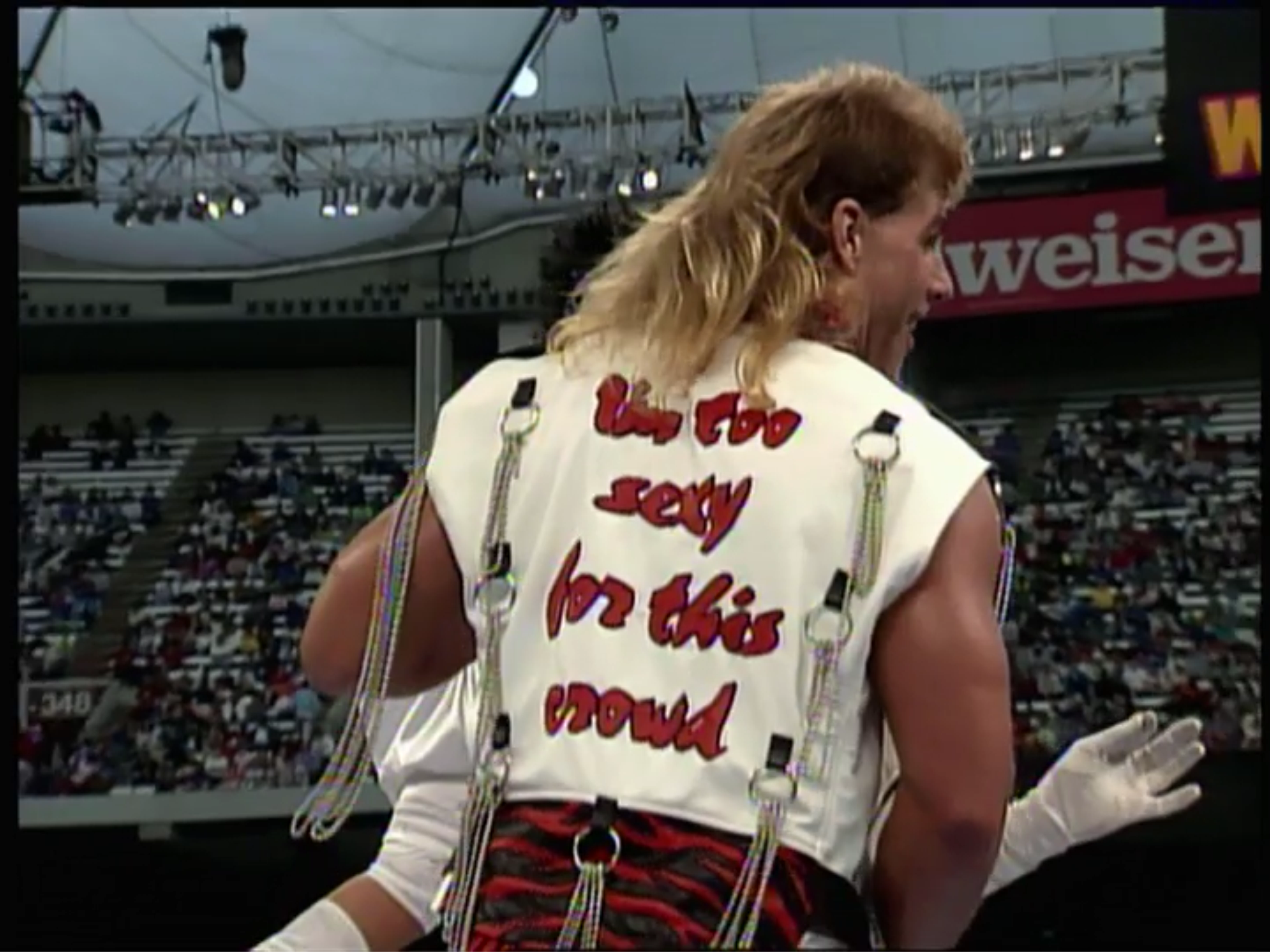 Summary: With Marty Jannetty on house arrest, the grudge match had to be scrapped. While Texas Tornado could have been a viable substitute, he was in rehab for prescription painkillers in reparation for his forging painkiller prescription arrest on 2/8. Michaels and Santana only wrestled three times against one another during house shows leading up to this match; therefore, they couldn't give a great performance.

After the match, Heenan states some prophetic words about Michaels' becoming champion and a "star of the '90s." It's no wonder they call him the "Brain."

From a platform, "Mean" Gene Okerlund interviews the Road Warriors. Wow! Look who finally decided to show up--"Precious" Paul Ellering. While Animal cuts a promo on Jimmy Hart for costing them the WWF tag team titles, Hawk's words always get me "we've been a runaway train. Nobody driving it. Scary...Gene? Scarier now, look who's driving the train (Ellering)." Great interview!

From the gold locker room, Sean Mooney interviews Roberts who insults WWF President Jack Tunney. We then see footage from Superstars when Roberts slammed the casket on Undertaker's hand and gave Bearer the DDT. He then WAFFLED Undertaker with a chair (aired 2/29, taped 1/28). He then tells people to trust him.

Summary: Due to Patterson's leaving the writing team along with the rest of his WWF duties, Roberts believed he should succeed him. After Vince McMahon purposely left the job vacant until Patterson's return, Roberts threatened to no-show this event and asked for his release. Hence, he was figuratively buried here.

Backstage, Okerlund interviews Bret and Piper. As Piper touts the Hart family while teasing him, Bret's all business. A shoving match ensues.

Summary: Yes, folks, it took Bret Hart to pull a **** match out of Piper. Great story, historical title change, and a match remembered to this day. Fantastic work, gentlemen! Also, the WWF had a strict no-blood policy. While Bret informed Vince that his bleeding was hardway, he revealed the truth that he actually bladed in his book.

After the match, Piper presented the belt to Bret. In essence, he passed the torch to him.

Heenan then interviews the latest newcomer to the WBF—the "Total Package" Lex Luger. Well, it didn't take long for Luger to reappear. In a funny moment, Luger denigrates Monsoon by calling him the "fat guy." He then states that he's "head and shoulders above" the rest of the WBF competitors and removes his sweater. To say the least, Luger is JACKED. He then receives a big glass of milk and says "see you June 13."

From the gold locker room, Mountie and the Nasty Boys cut a promo on Virgil. Suddenly, Repo Man appears and is ecstatic about the upcoming match. Perhaps he'll use his WrestleMania payoff to buy a new snow blower. 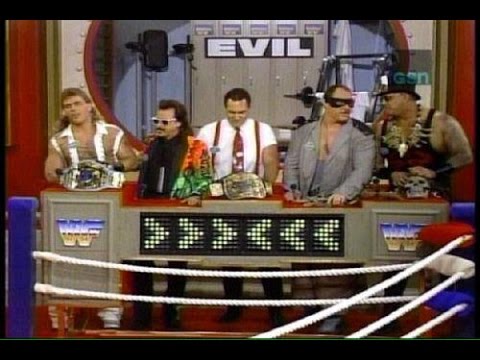 Summary: Comedy match that was necessary after the great IC title match.

Back in the gold locker room, Mooney interviews Flair with Mr. Perfect. While Perfect clamors over the alleged revealing pictorial of Elizabeth, Flair zestfully promotes his upcoming match. He then cuts a promo on Savage.

Outside Savage's dressing room, Okerlund's unable to obtain an interview. 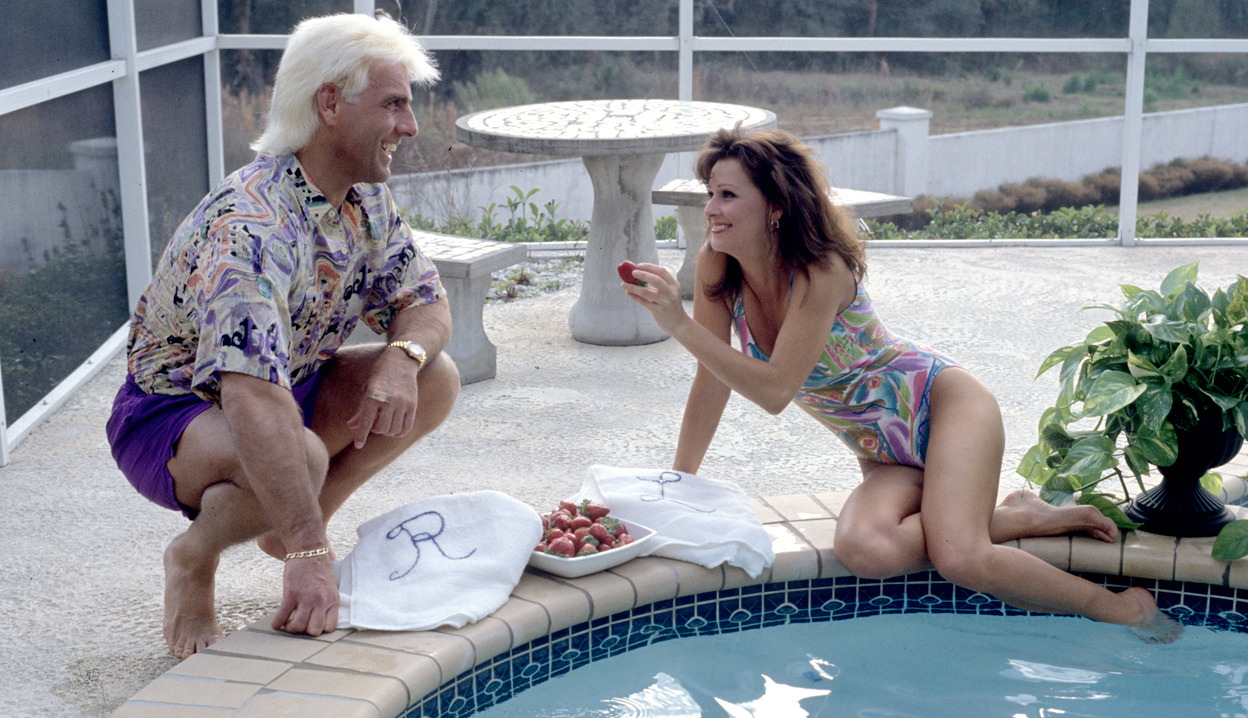 Summary: For the second time, Savage is WWF champion. While it isn't a technical masterpiece, the story told is flawless and grabs the wrestling fan by the hand on a fantastic journey. Since Flair's blade job was caught on camera, Vince chewed him out, and Flair was fined heavily.

After the match, Elizabeth joins her husband in the ring, but Flair confronts her. Upon asking her "what about me," Flair kisses Elizabeth. Shocked, Elizabeth slaps and shoves Flair down. An irate Savage then attacks Flair while officials separate them. Barely able to stand, Savage wants a piece of Flair but gets restrained.

To cap off the moment, fireworks explode as Savage and Elizabeth share this great moment in wrestling history. 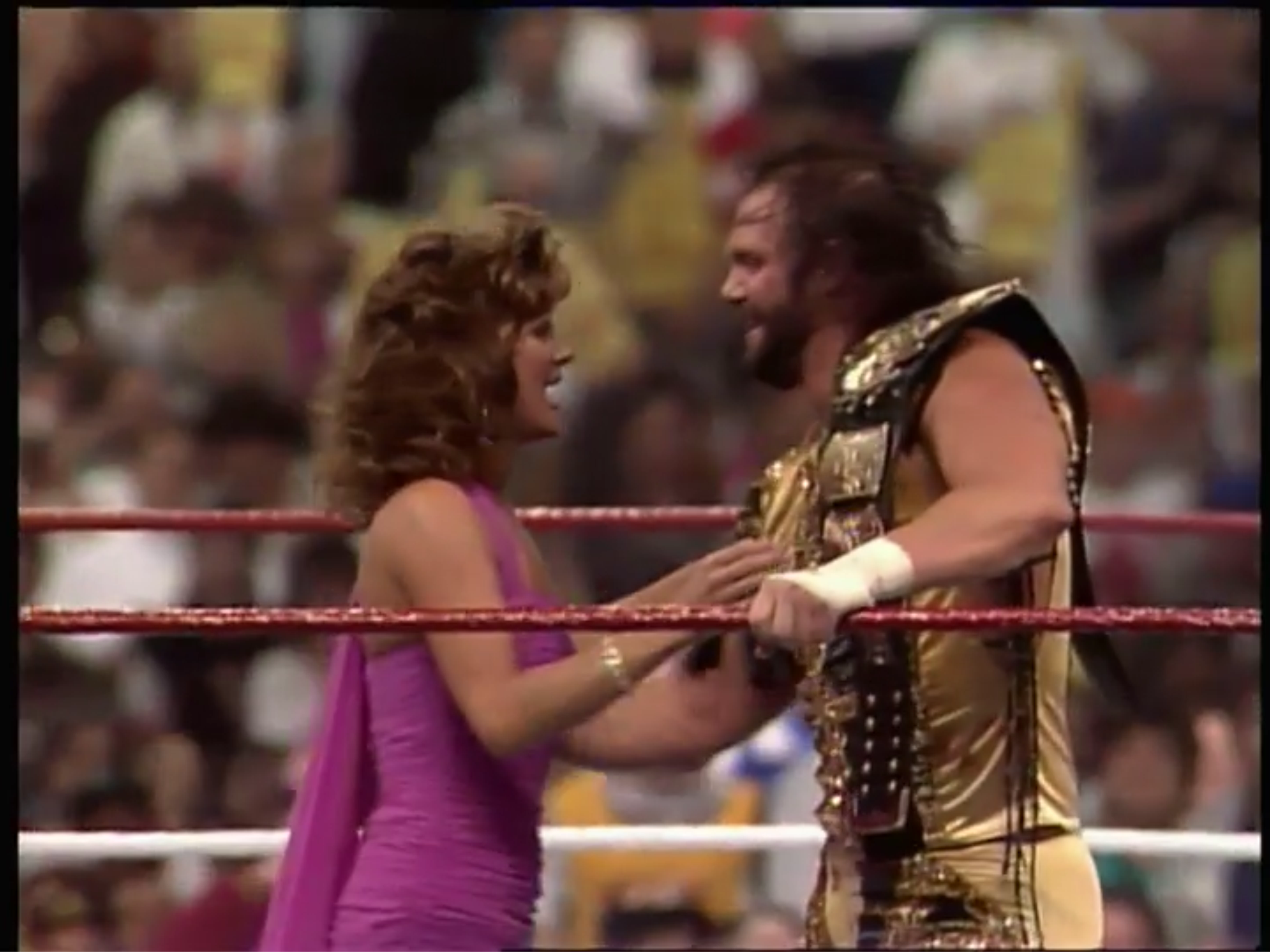 Back in the gold locker room, Mooney interviews Flair with Perfect. Rightfully, Perfect claims Savage pulled Flair's trunks to steal the title. Heenan joins them and corroborates Perfect's claim. While Flair dispels Savage's claim to both the WWF title and Elizabeth, Perfect refers to her as "damaged goods" and a "cheater." Flair then promises to beat Savage as well as kiss Elizabeth on "those moist, wet lips." Talk about a great way to antagonize an exceedingly jealous husband.

Backstage, Okerlund interviews the NEW WWF champion Savage with Elizabeth. Savage wants "the whole Ric Flair" who pissed him off. When Okerlund asks Elizabeth about vindication, Savage hands her the belt, rips apart his shirt, and wants another shot at Flair.

Prior to the next match, Mooney interviews Martel who makes a joke about Tatanka allegedly scalping tickets.

Summary: Pure definition of a popcorn match while its purpose was to showcase newcomer Tatanka.

Back in the gold locker room, Mooney interviews Money, Inc. with Hart.

Summary: Heatless match for the most part with a crappy ending. I understand the other two titles already changed hands, but cheat to win or get disqualified in the process for cryin' out loud.

Backstage, Okerlund interviews Brutus "The Barber" Beefcake who touts his support for the Hulkster.

After the match, Owen dropkicks Skinner out of the ring.

From the gold locker room, Okerlund interviews Sid with Wippleman who cuts a promo on Hogan.

In a pre-recorded interview with Vince, Hogan replied to retirement match rumors with distinct uncertainty. As Vince thanked Hogan, they shook hands.

Sid then rebuts by "cursing" Hogan. Perhaps he'll summon the services of a voodoo witch doctor.

Summary: Despite the historical kick-out, only Hogan's immense popularity meant anything to this match.

Afterward, Hogan gorilla-presses Wippleman and tosses him at Sid. Better late than never, Papa Shango lumbers to the ring and attacks Hogan. Sid and Papa Shango then double-team Hogan until...

Oh. My. God! The Ultimate Warrior's music plays, and he sprints to the ring to rescue Hogan. Upon entering the ring, he clotheslines Papa Shango over the top rope to the floor. Sid then WAFFLES him in the back with a steel chair. When he tried to put Warrior's lights out, Hogan swiped the chair from Sid. Hogan and Warrior then embrace to celebrate Hogan's victory. Fireworks explode as Warrior and Hogan pose for the Indianapolis faithful to end the show.

Was Papa Shango egregiously late for his run-in? Was Sid supposed to kick out at 2? Did Sid go into business for himself knowing he'd failed a drug test? Or was it just supposed to end in a schmozz? Let the debate begin.

Conclusion: Main event controversy aside, this show is chock full of not only fun goodness but historical goodness as well. The Bret and Savage victories are spectacular matches every wrestling fan should enjoy. If you want to see a young Undertaker destroy slimy heel Roberts, it's here too. Gather your friends and family and relish in what could be considered the last WrestleMania of the golden era of professional wrestling.

See you for WCW WrestleWar ‘92!