What are Kevin’s thoughts about Adams’ heel turn? Can the Long Riders regain the American tag titles from Rock’n’Soul? What’s on Roberts’ mind these days? And who will join me for this principled episode? 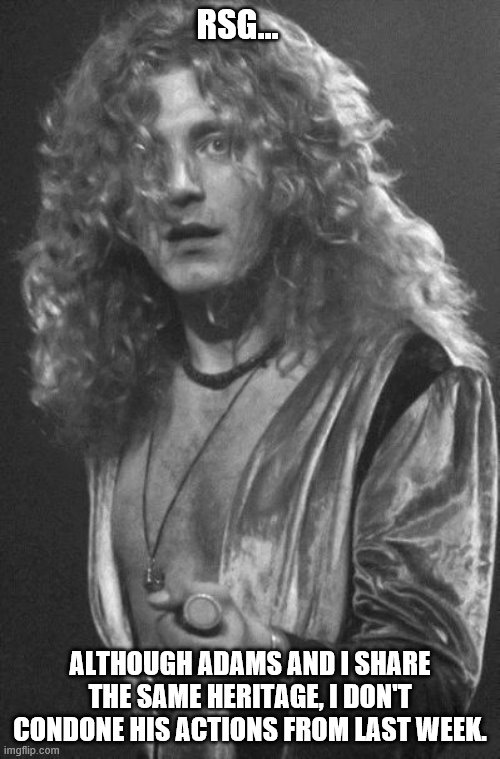 Robert, great to have a British point of view for a change. Welcome! I hope you’re in the mood for some Texas ‘rasslin’.

WCCW UPDATE: Mercer describes the Adams’ heel turn and interviews a very hoarse Kevin. While they review “the tape,” Kevin notes that it’s all on Adams and not Hart pulling his strings. That’s an interesting twist! Usually it’s the opposite. Regardless, Kevin “can’t wait to get a shot at (Adams).” 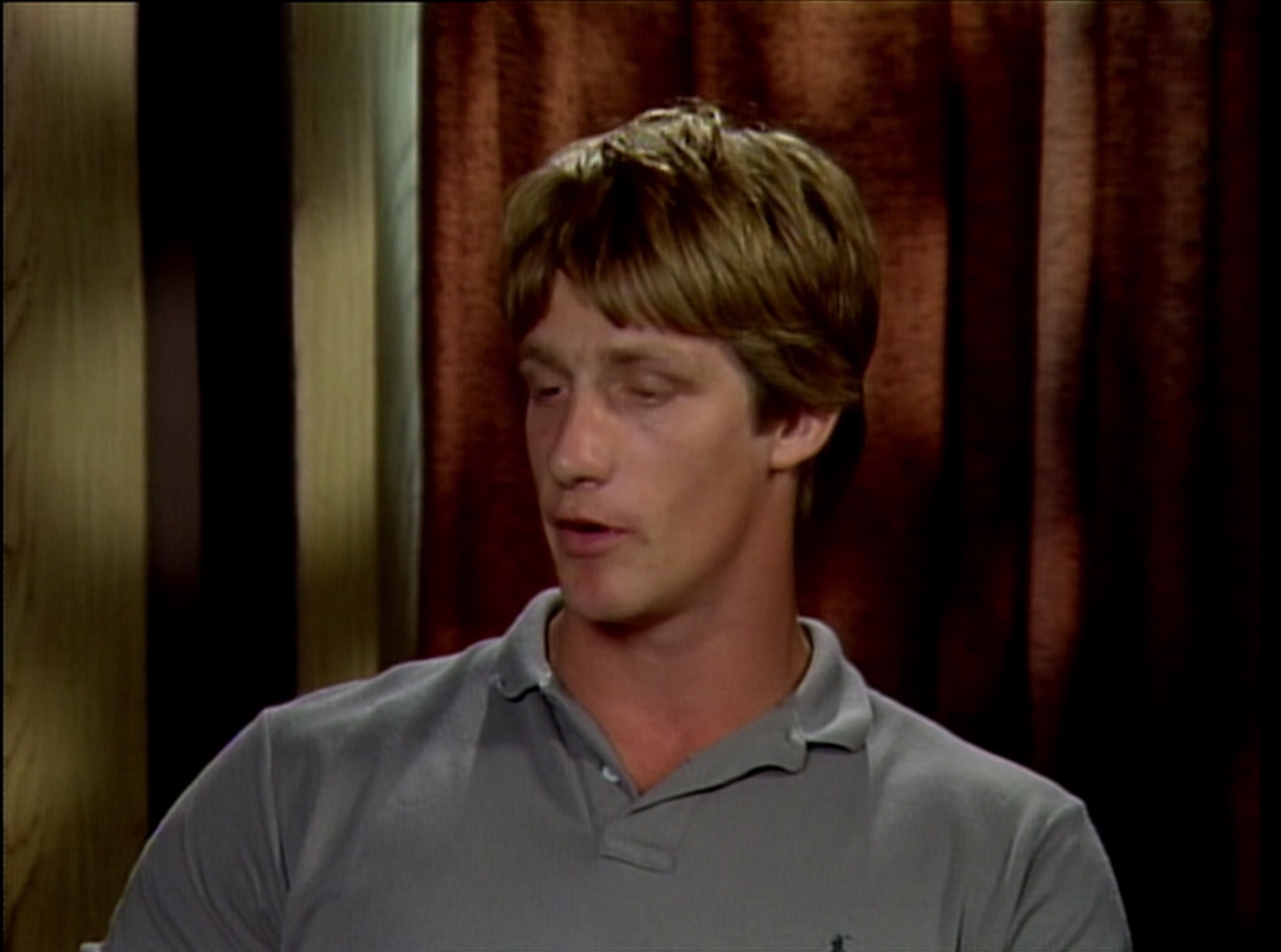 Next, they discuss a six-man match in Fort Worth where Zumhofe had to replace Kevin due to a concussion suffered from the superkick and beatdown. We review highlights of the match, and Adams joins the heel side to face the Von Erichs. During the match, Mike and Adams trade moves until Kevin storms the ring. Kevin and Adams brawl until referees David Manning and Rick Hazzard separate them.

When Mercer mentions the six-man match between the Von Erichs and Adams, Hernandez, and Roberts at the Cotton Bowl, Kevin “can’t wait for it.”

Following a commercial break, Mercer interviews Roberts in a junkyard. While Roberts takes pride in his limited lifestyle, Mercer questions him about rules. Roberts responds with “aren’t rules made to be broken?” He also adds that “too many people live in glass houses.” Harsh reality, I guess. 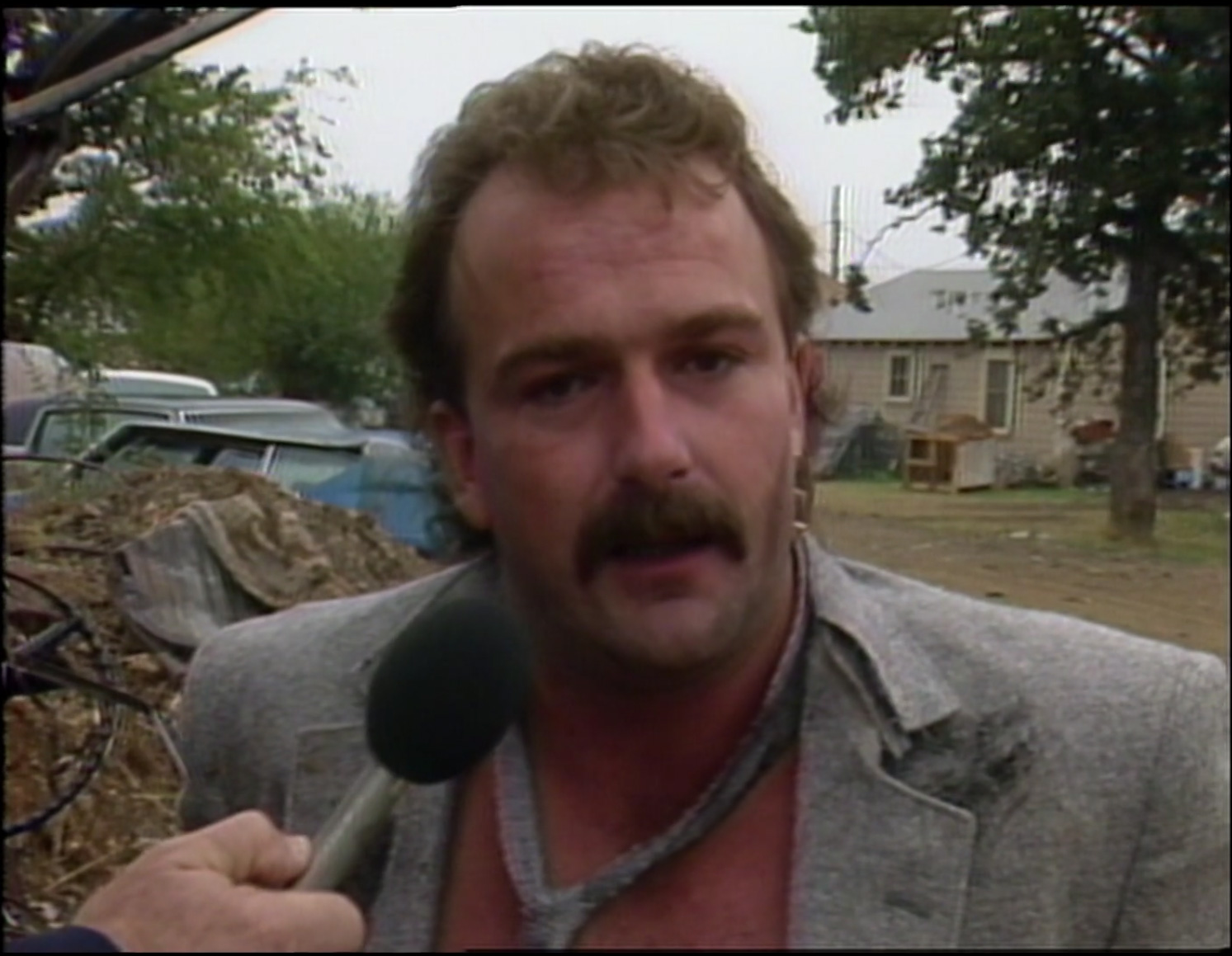 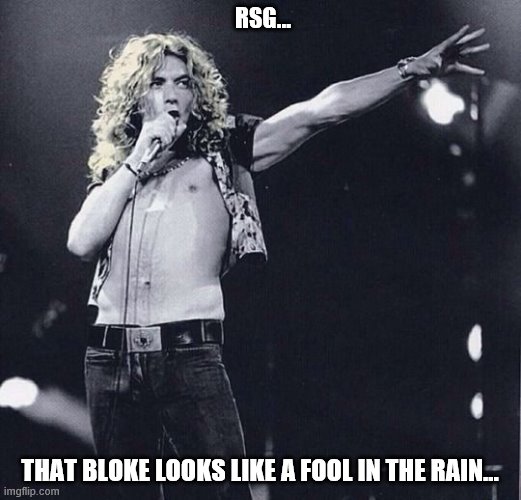 Prior to the next match, Marc Lowrance interviews Kerry in the locker room. Kerry can’t believe what Adams did last week and promises “it won’t happen again.” Next, Parsons and Zumhofe feel that Adams “went goofy.” Zumhofe’s ready to defend the tag titles against anyone. 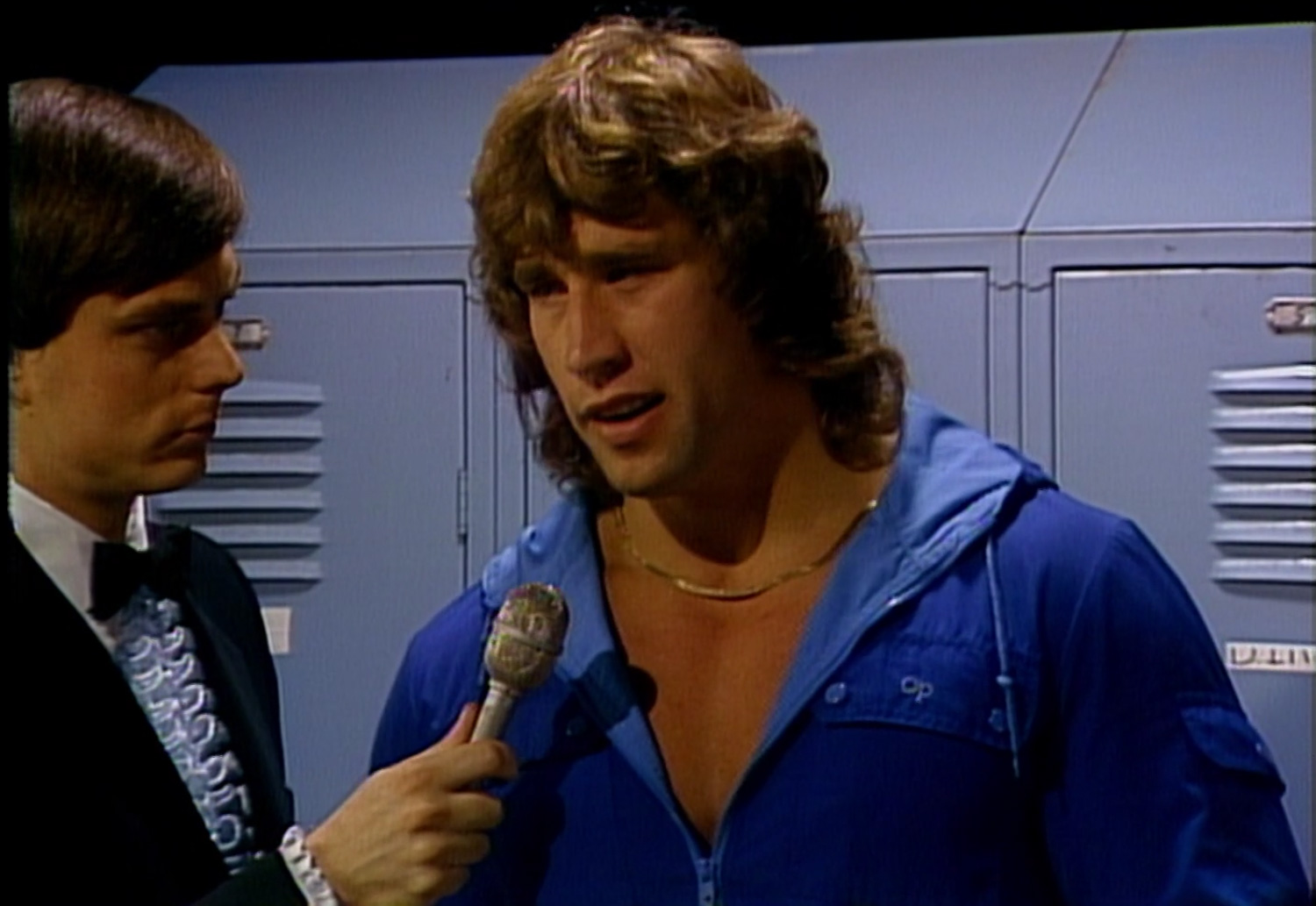 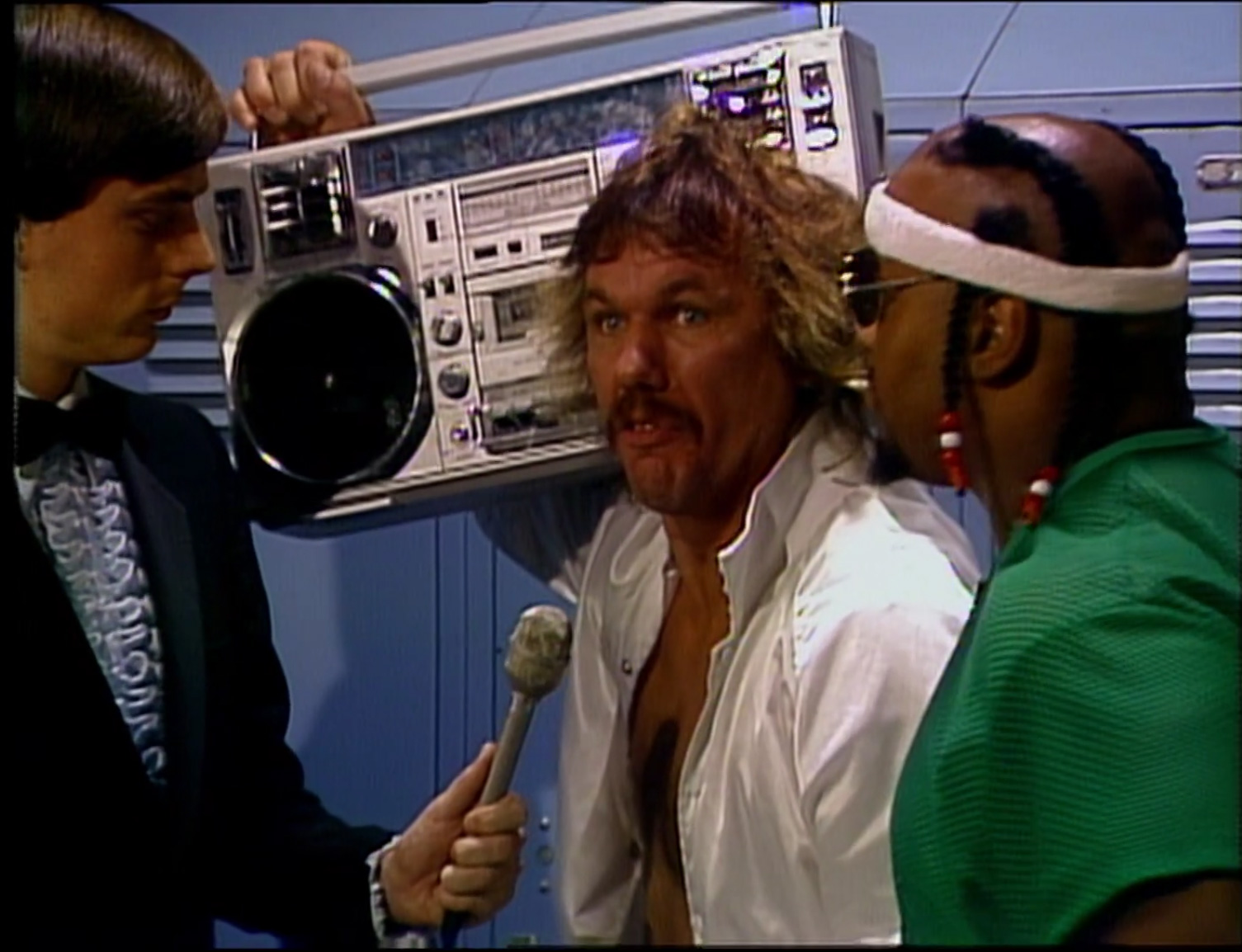 Summary: Showcase match for Mike. Subtract ½* for the botch. 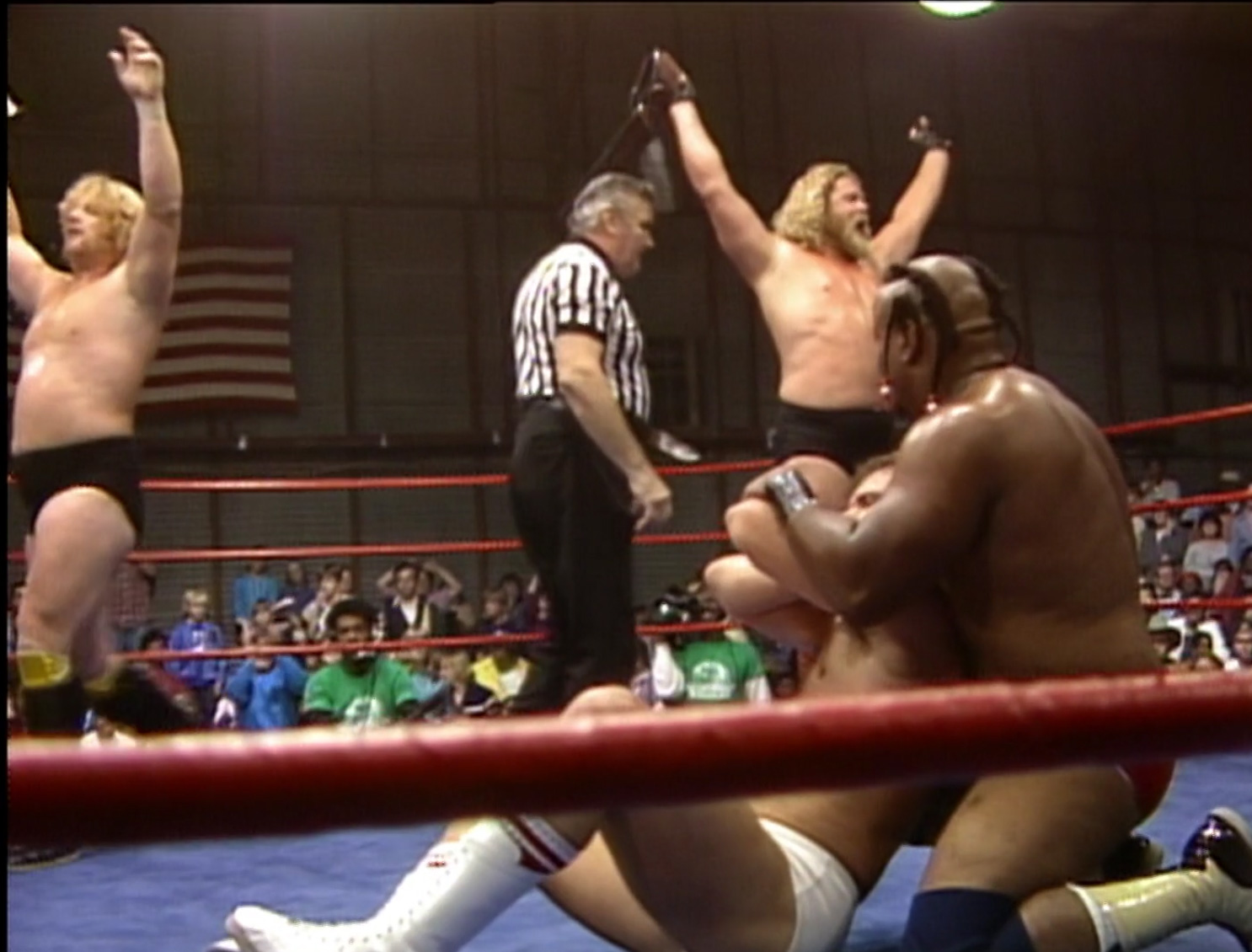 Summary: Solid tag match that followed the formula. The LOOOOOONG heat segment on Parsons didn’t lead to a molten hot tag, but the heels never seemed to be in too much jeopardy.

Conclusion: The Long Riders capture the American tag titles while Mike and Roberts won in enhancement matches. Also, Kevin’s ready to take aim at Adams while Roberts provides a down-to-earth promo despite being a heel. Kerry wants to make sure Adams doesn’t get away with what he did to Kevin, and Rock’n’Soul takes their lumps. What do you think , Robert?

That’s great to hear! Thanks for joining! Keep on rockin’!