Who will win the vacant American tag titles? Who wins the 12-man match? Who wins the car? How does Mike fare against the “Crippler”? And who will join me for the second half of this doubleheader? 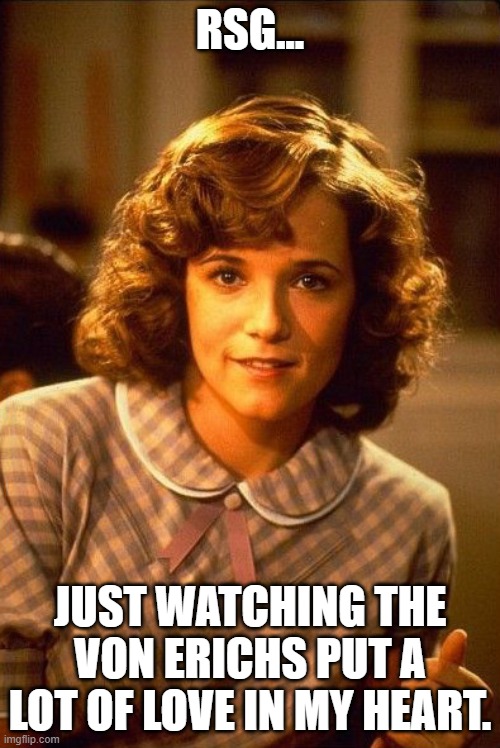 Summary: Fantastic match with non-stop action from both sides and a definite classic if you’ve never seen it. The only issue I had with it was the directing as some action was missed in one ring when the camera was capturing some non-action in the other one. C’mon, Keith Mitchell!

After the match, Hart grabs the microphone, summons Gang, and orders him to “destroy that damn car…with the chain.” How dastardly! Before Gang can unleash his chain upon the Lincoln, Mike flies at him with a cross body block to knock Gang down. 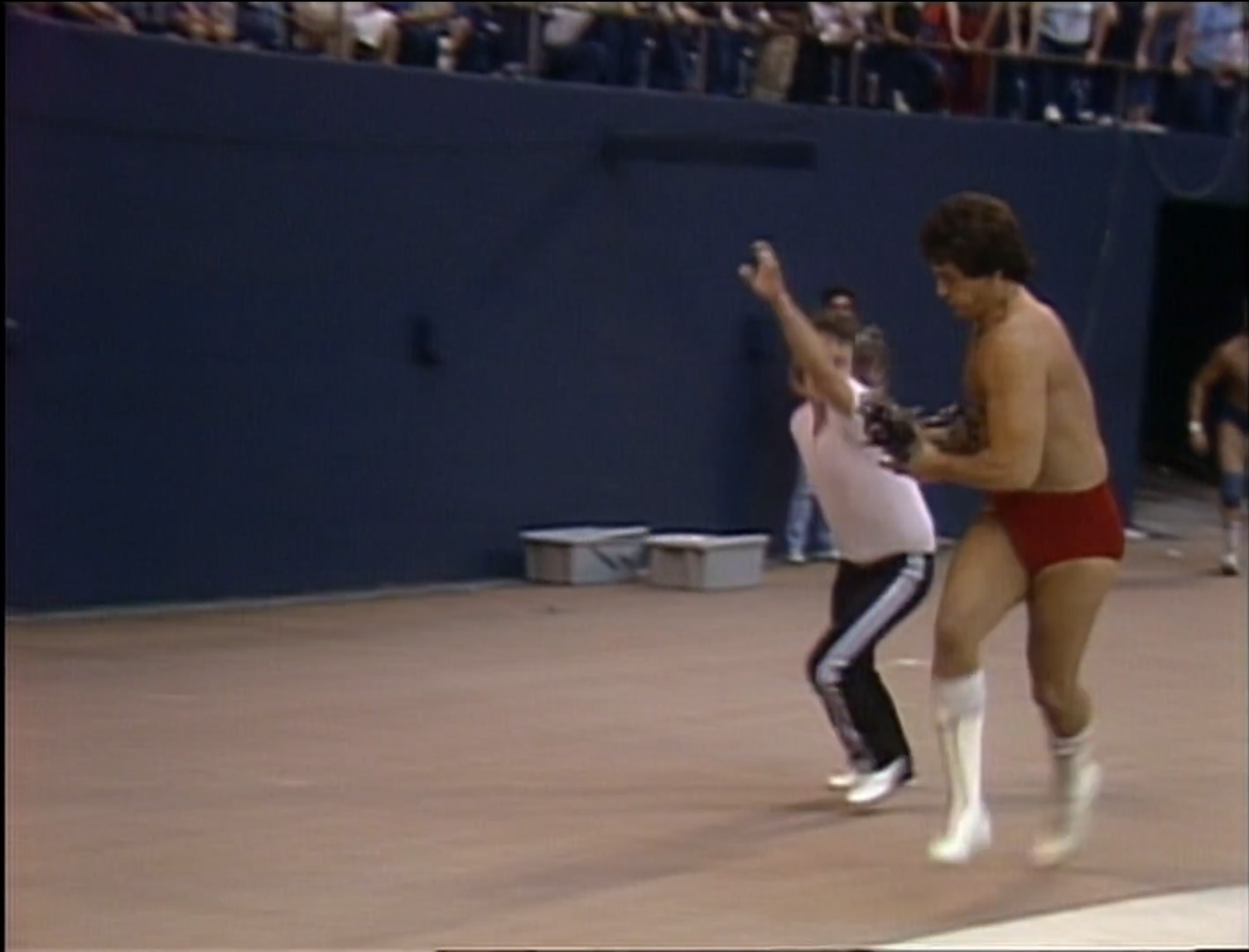 He then whips the chain and smashes the windshield. Evil! 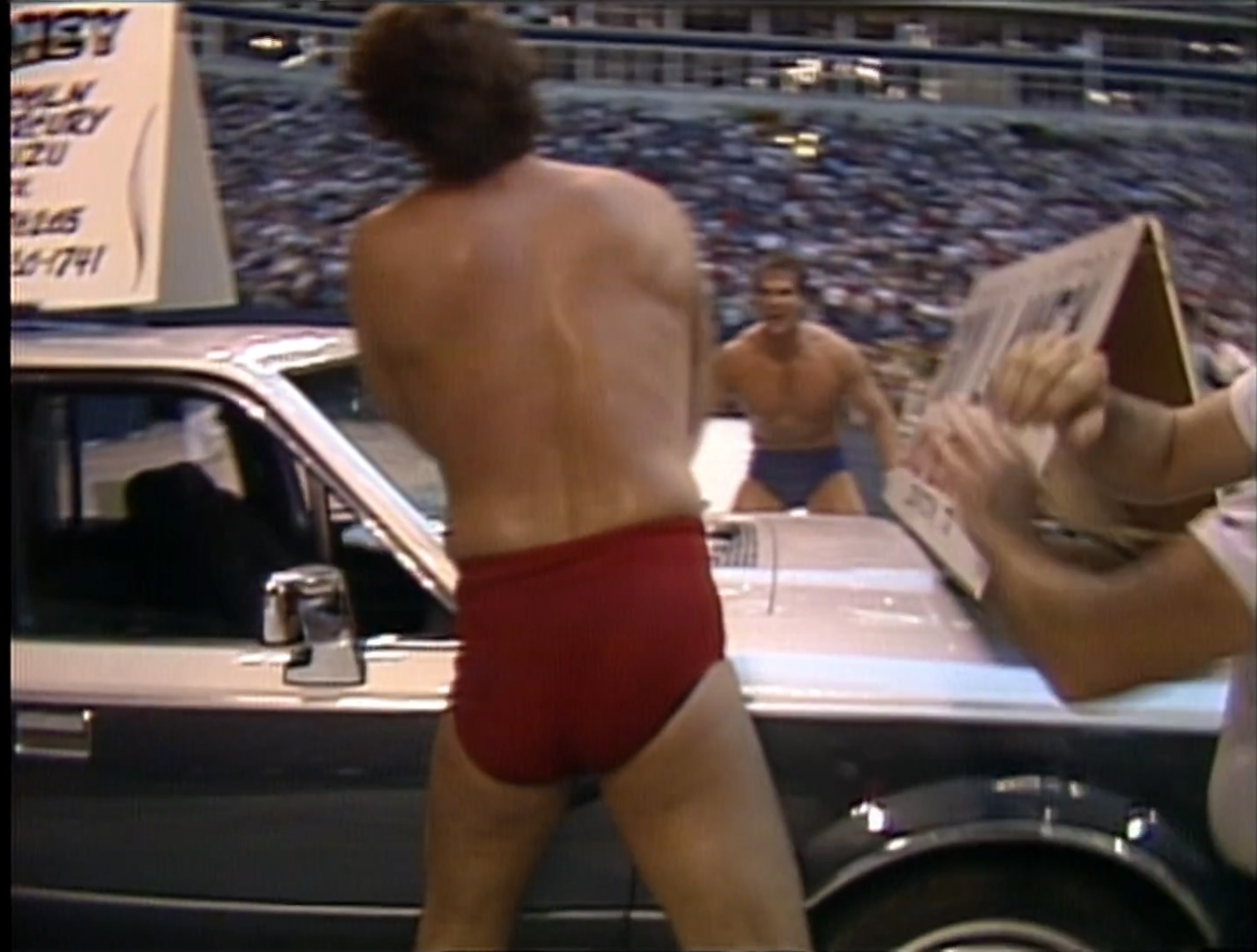 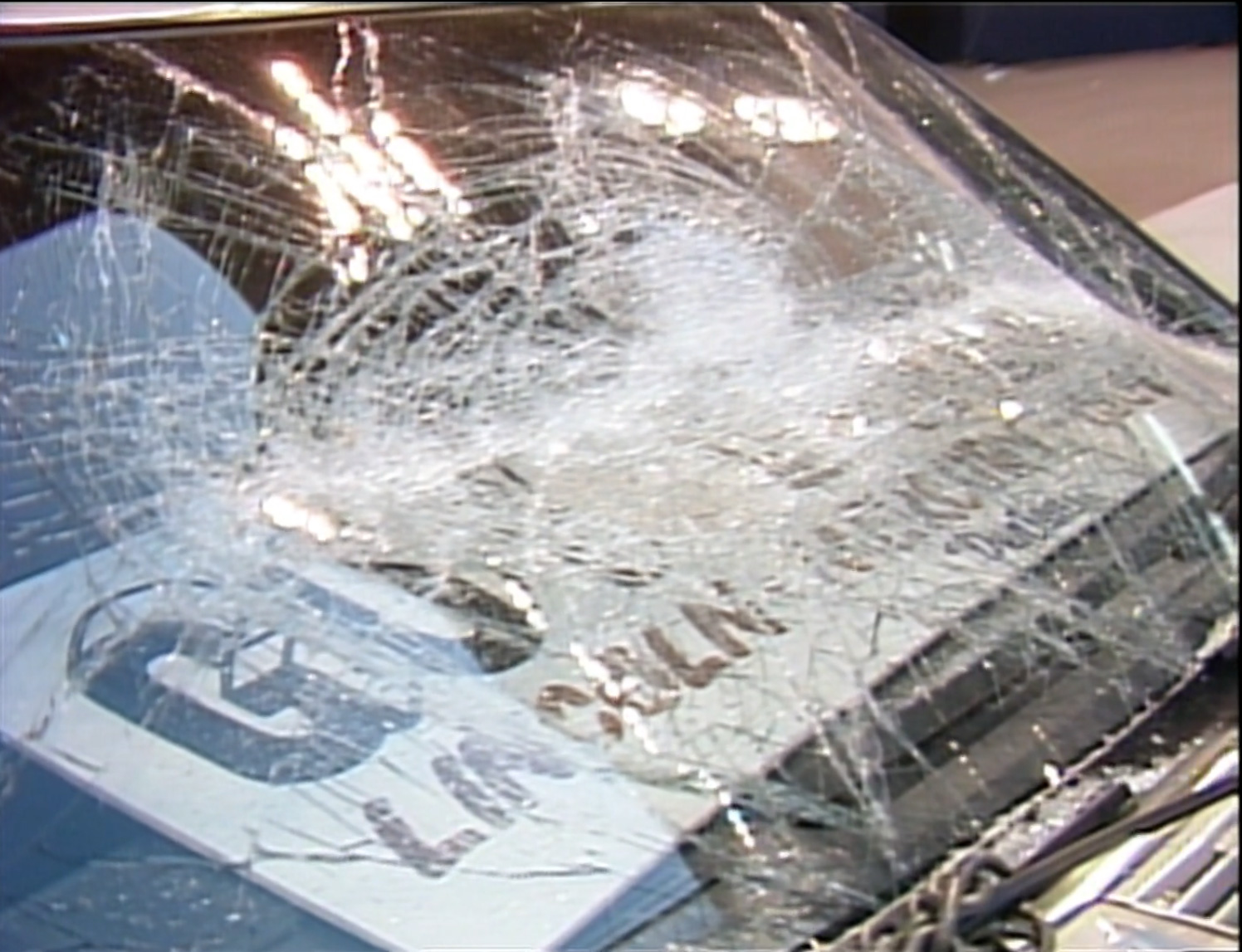 Adams kicks it for more damage, and the Dynamic Duo has vandalized the Lincoln won by Kevin.

Officials prevent an irate trio of Von Erichs from storming after them. Justice will have to wait.

HOT TAKE: Excellent post-match chicanery to fuel a huge crowd against the Dynamic Duo. They fucked up a $25,000 luxury car! How can you not want the Von Erichs to punish them for their misdeed?

Summary: Mike gets revenge in a match where only one minor mistake could be seen. His ability to keep the match flowing has improved quite a bit more than likely due to Oliver. 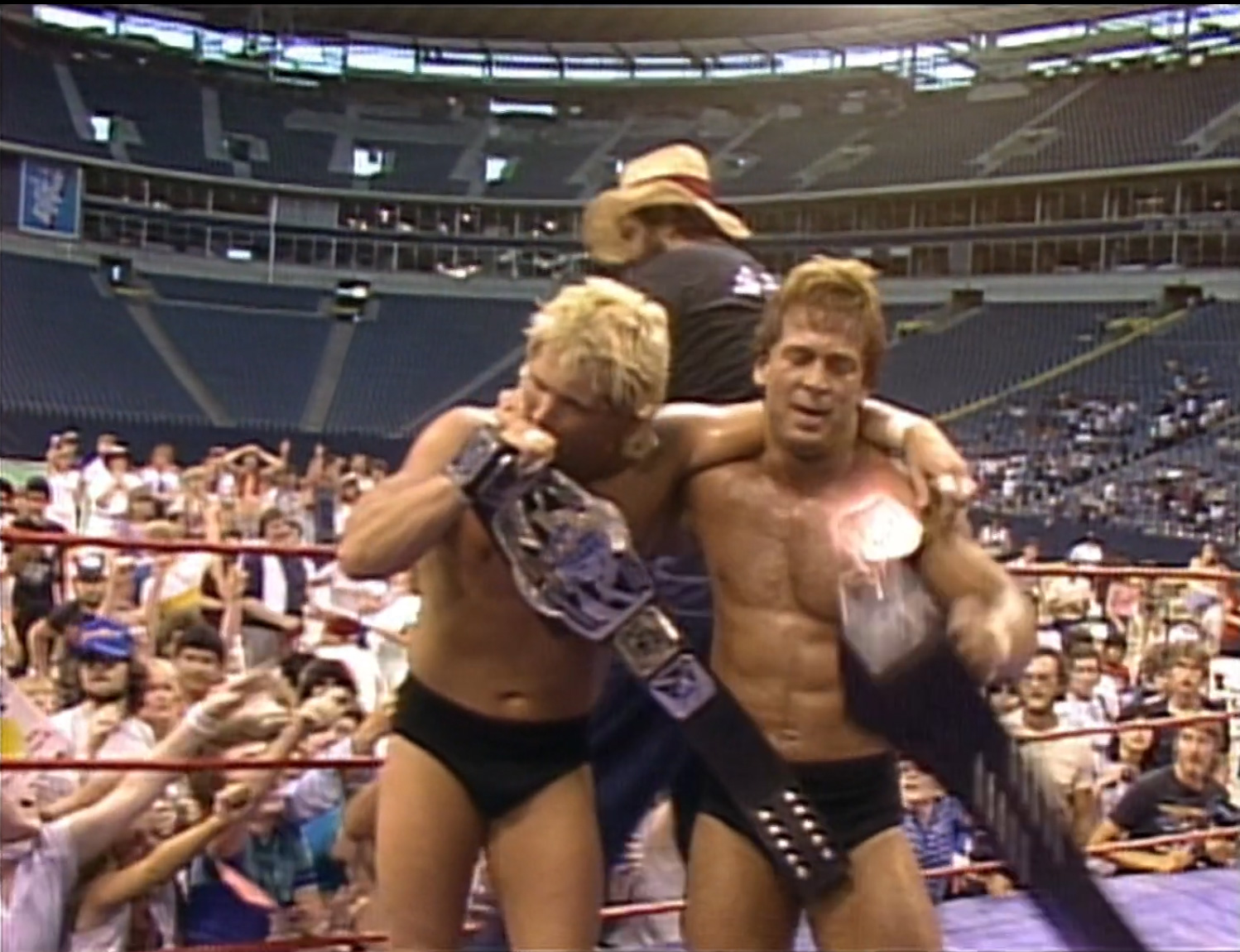 Summary: Quite the convoluted finish as the camera barely shot Cornette’s interference. I would love to rate this higher, but that finish was TERRIBLE.

After the match, Hazzard presents the Fantastics with the belts, but Cornette BREAKS his racquet across the back of Little John. Since it doesn’t faze him, Little John briefly saunters after Cornette, but he’s long gone. What’s your reaction, Dr. Brown? 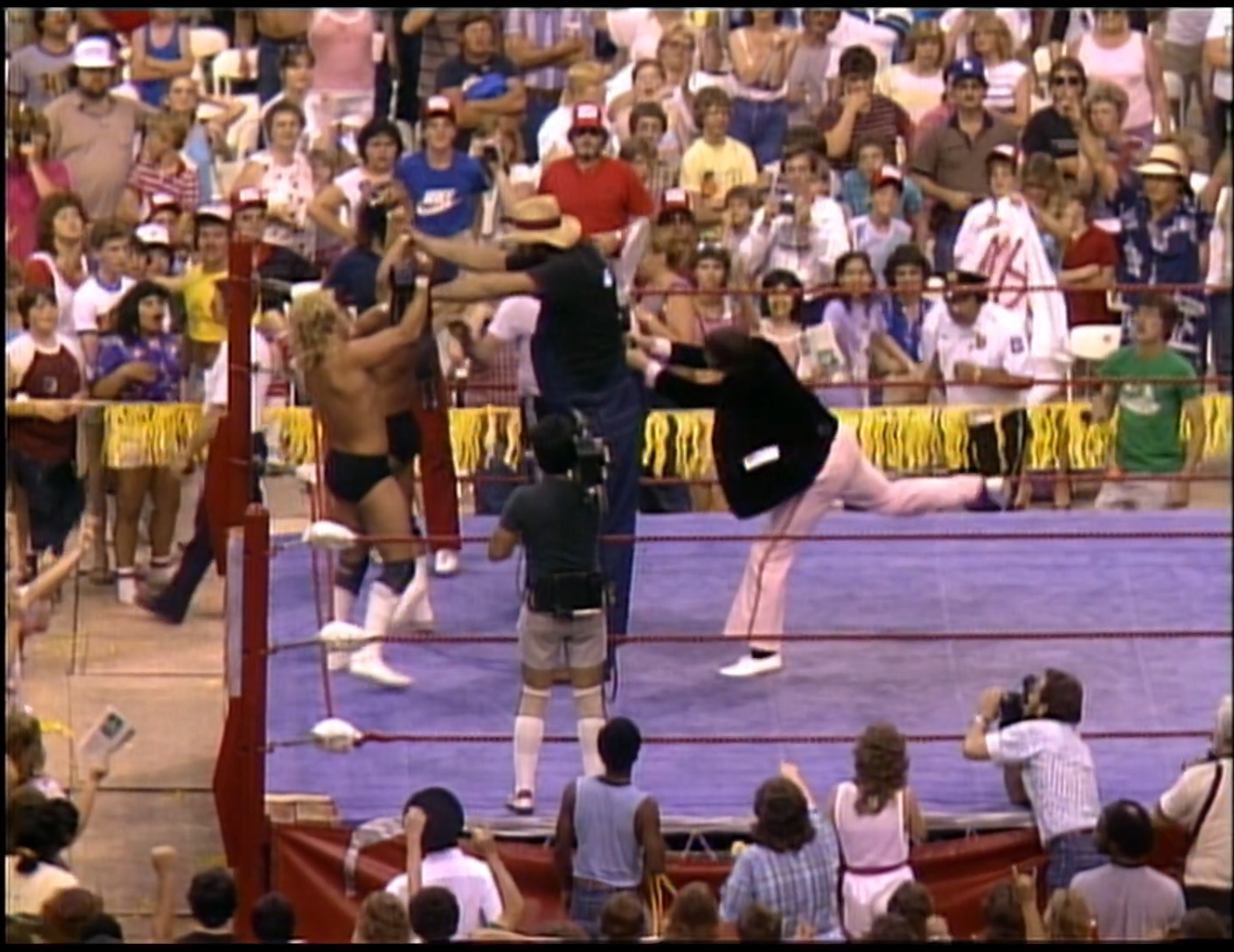 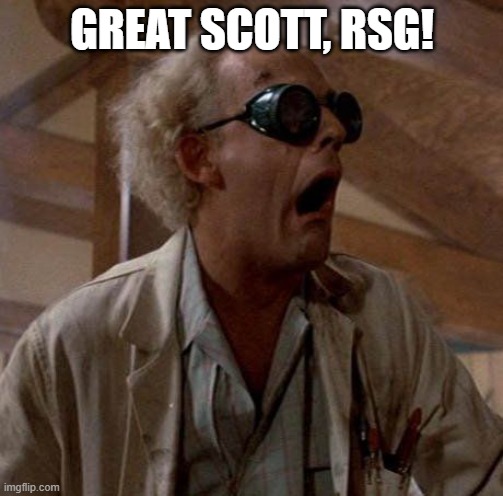 UPON FURTHER REVIEW: According to Cornette during a podcast, he instructed Little John to slap Eaton sooner than he actually did. Since that was mistimed, the “simultaneous” pins weren’t simultaneous. Also, the racquet wasn’t supposed to break across Little John’s back. Instead, Little John was supposed to break it, but it broke off before he was given the chance. Ultimately, Cornette and the Midnight Express left WCCW once their checks cleared. Since they’re on WCCW TV on 6/10, I guess those checks took their time getting to them.

Conclusion: The 12-man match and post-match shenanigans had something for everyone—both a Von Erich victory in a good battle as well as the Dynamic Duo’s spoiling of the grand prize. Mike’s victory over Oliver was well-booked, but the finish to the long-awaited climax of the Fantastics-Midnight Express feud left a sour taste in my mouth. Definitely check this out but be prepared at the end to avoid disappointment. Care to add something, Biff? 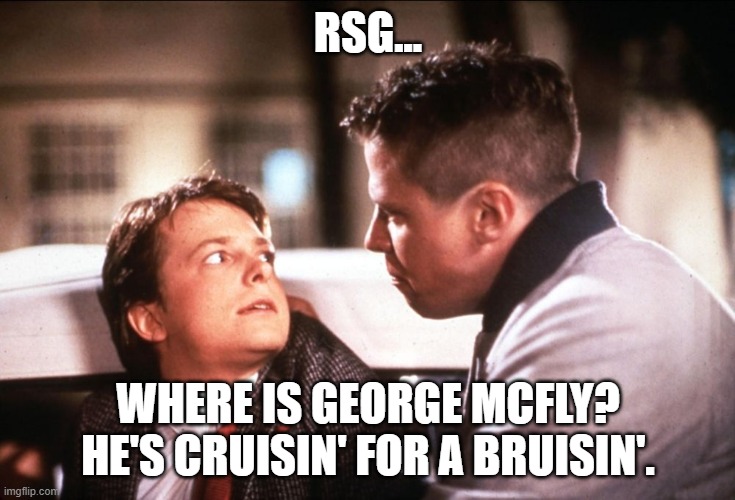 Baby steps, Biff. We have one more match from this supershow in next week’s episode, so you’re bound to find him there.