Who will win the steel cage match for the leadership of the nWo? Can Sting retain the World title against Scott Hall? Who will win the triple jeopardy match? Let’s find out!

Summary: The shine on Booker T remains strong as Eddie put forth a great effort only to be denied.

After the match, Chavo smirks at Eddie, and they shove one another. Chavo turns his back…and Eddie attacks him. While Eddie rams him shoulder-first into the steel railing, he slams Chavo on the floor. Eddie sure puts the fun in dysfunctional, no?

Allegedly, Scott Steiner was at the WCW.com table backstage, but the WWE Network removed it.

Summary: Guerrera’s perseverance and high-flying coupled with Konnan’s psychology made this a very entertaining match.

After the match, Guerrera leaps at Konnan but eats another 187. Konnan then launches him over the top rope to the floor.

At the entrance, “Mean” Gene Okerlund interviews JJ Dillon who reinstates the powerbomb for tonight’s Giant versus Nash match.

After the match, Jericho rebuffs Okerlund, so Okerlund enters the ring to interview a frustrated Malenko. He notes that Malenko didn’t win at Starrcade, Souled Out, SuperBrawl, and Uncensored then calls Malenko a “bona fide loser.” Damn! Malenko remains at a loss for words, so Okerlund asks him where his future lies. Solemnly, Malenko responds with “home.” Perhaps he craved some Motley Crue?

Raven is at the WCW.com table with Mark Madden and Lee Marshall and vows to win the US title tonight. They left this in and removed Scott Steiner?

Summary: While having WCW defeat nWo in a midcard match pops the crowd, Scott’s character is brand new and should have been elevated. Truly a booking mistake.

After the match, Scott not only nails Luger but also Patrick. He grabs the chair, but Luger crawls out of the ring. Alternatively, Rick steps into the ring. When Scott charges with the chair, Rick backdrops him over the top rope to the floor. Methinks Scott will need a little more character development before WCW pushes him higher.

Whoa! Slow down there, gym rat!

Match 5 for the WCW US title (triple jeopardy): Diamond Dallas Page (champion) versus the “Crippler” Chris Benoit versus Raven 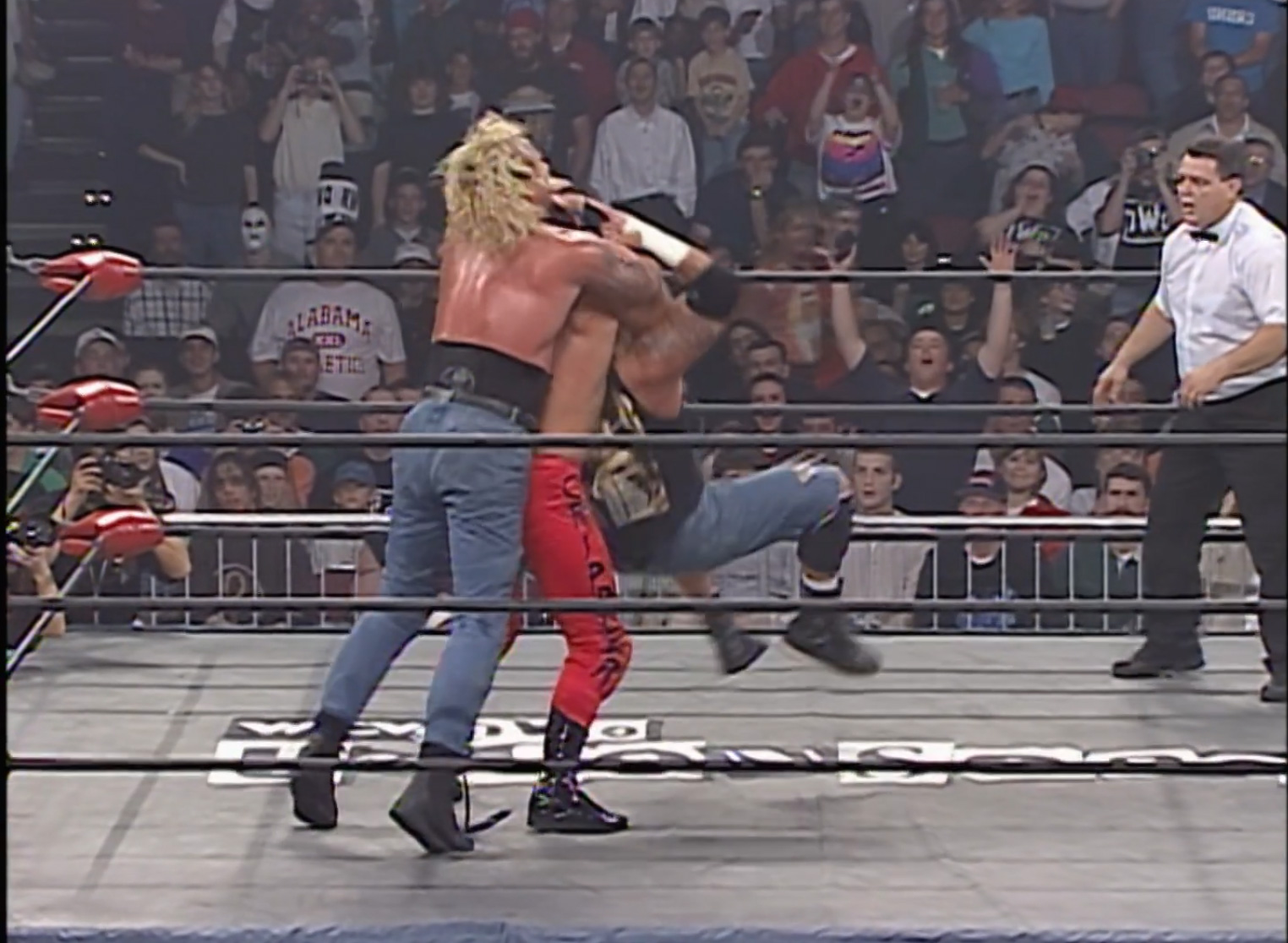 Summary: Amazing war between three wrestlers. In 1998, triple-threat matches were extremely uncommon, yet these guys made it an art form. Bravo!

After the match, Hammer drags an OUT COLD Raven from the ring while DDP and Benoit shake hands. Sportsmanship!

Summary: Someone explain to me how you drag this feud out this long, and nothing worthwhile transpireD from it? Were they taking lessons from Herb Abrams?

After the match, the nWo infiltrates the ring to pound Giant. Both Vincent and Konnan have ZERO effect on him as Giant shoves them across the ring. Adams charges, but Giant headbutts him, steals the bat, and breaks it across his knee. He then chokeslams Vincent with one arm, Konnan, and attempts one on Adams.

On the contrary, Nash CRACKS Giant with a baseball bat across the back. Before he can jackknife-powerbomb him, Giant ROARS to his feet in anger sending the nWo running away in fear.

Summary: The Mobile faithful was not invested in this one, and the effort by Hennig showed. While Hennig used some psychology, Bret paced the match to Hennig’s speed. Unfortunately, it wasn’t as crisp as their past two encounters. What a shame.

After the match, Rude clobbers and gives Bret two HARD cross corner whips to injure the back. Hennig brings a chair into the ring, and Rude delivers a swinging neckbreaker. As Hennig tries to nail Bret with a cushioned chair, he misses terribly. Bret sells it regardless. 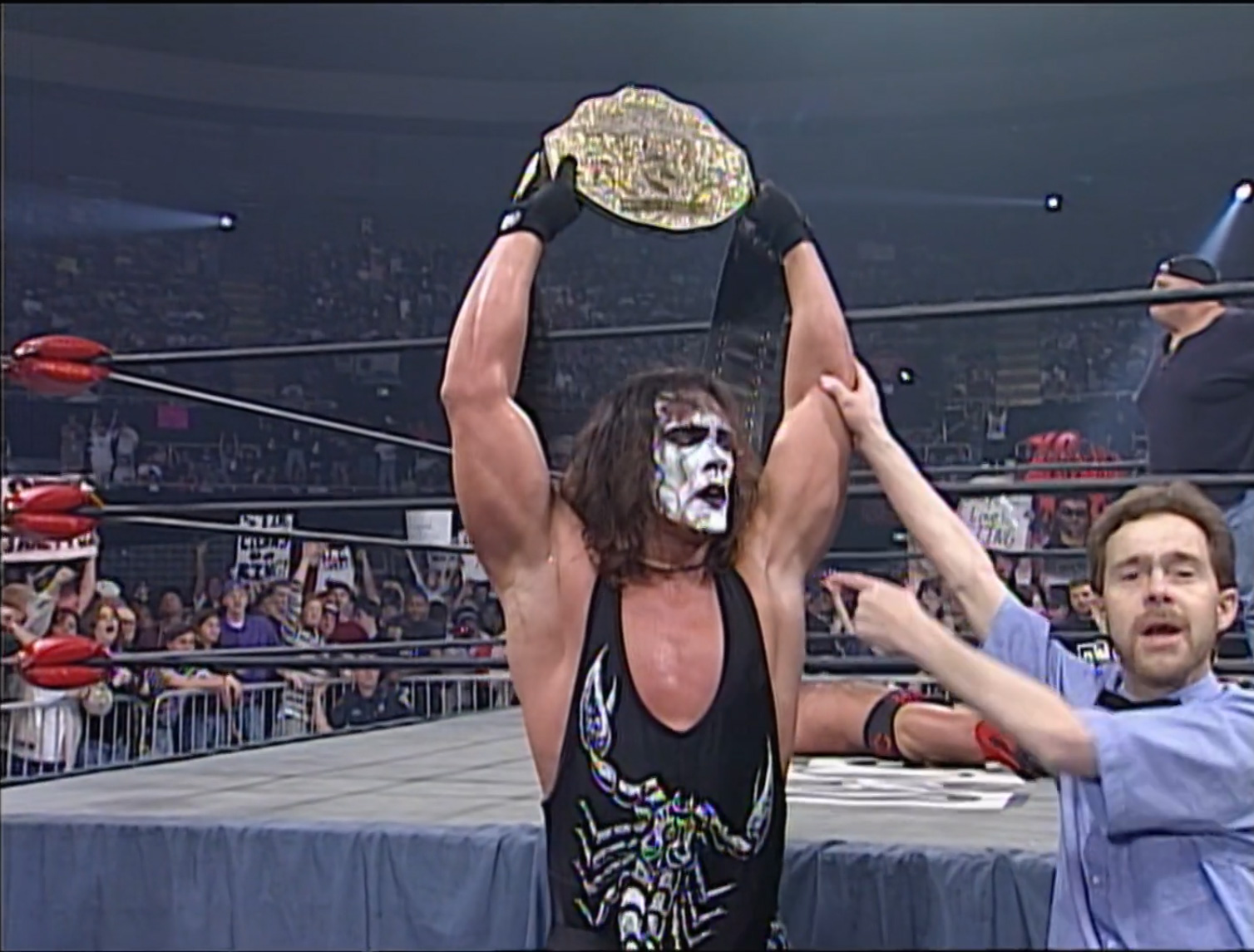 Summary: The Mobile faithful were heavily engaged, but the match was nothing special.

After the match, Sting receives the belt from Curtis but drops it to crotch-chop Rhodes. 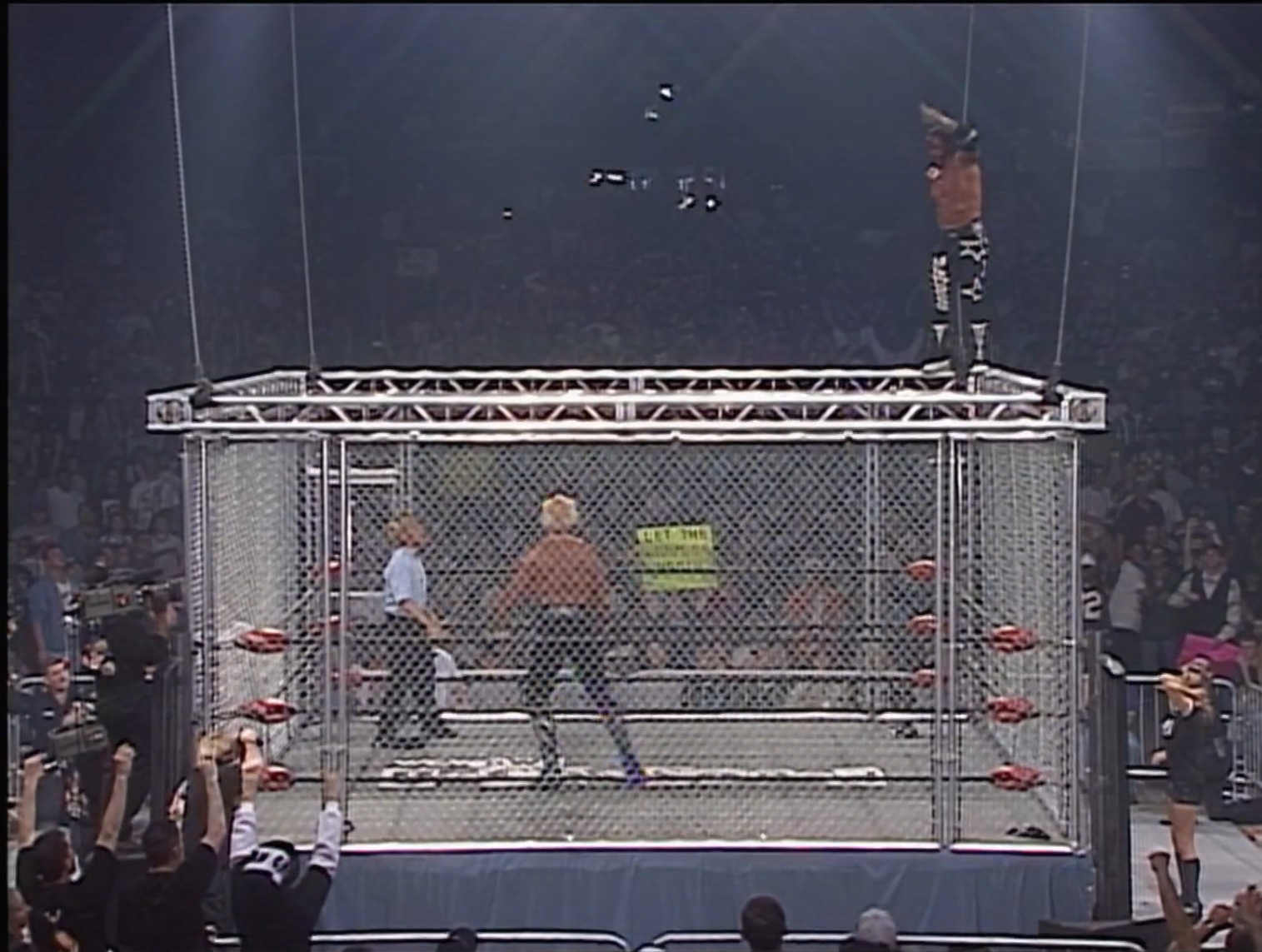 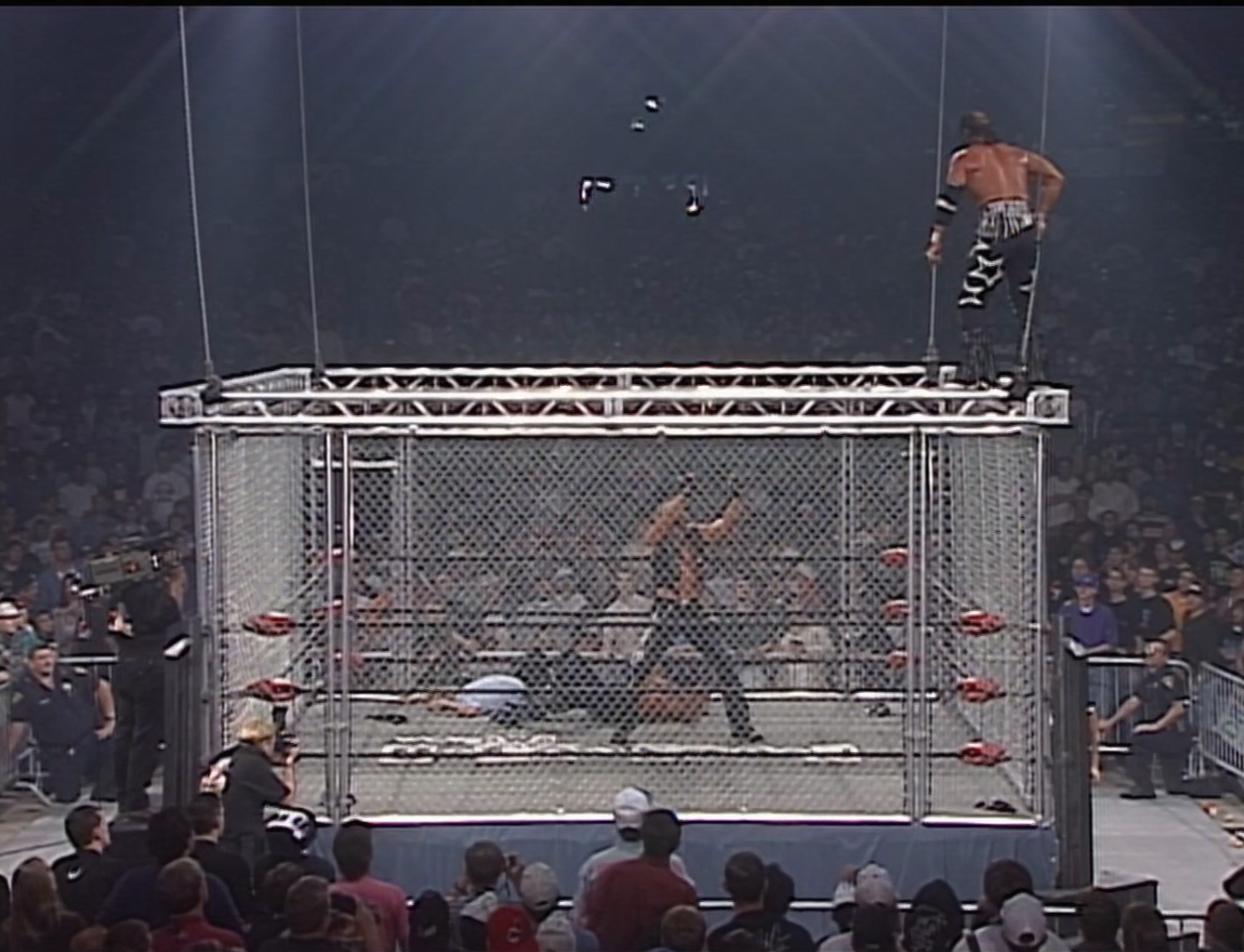 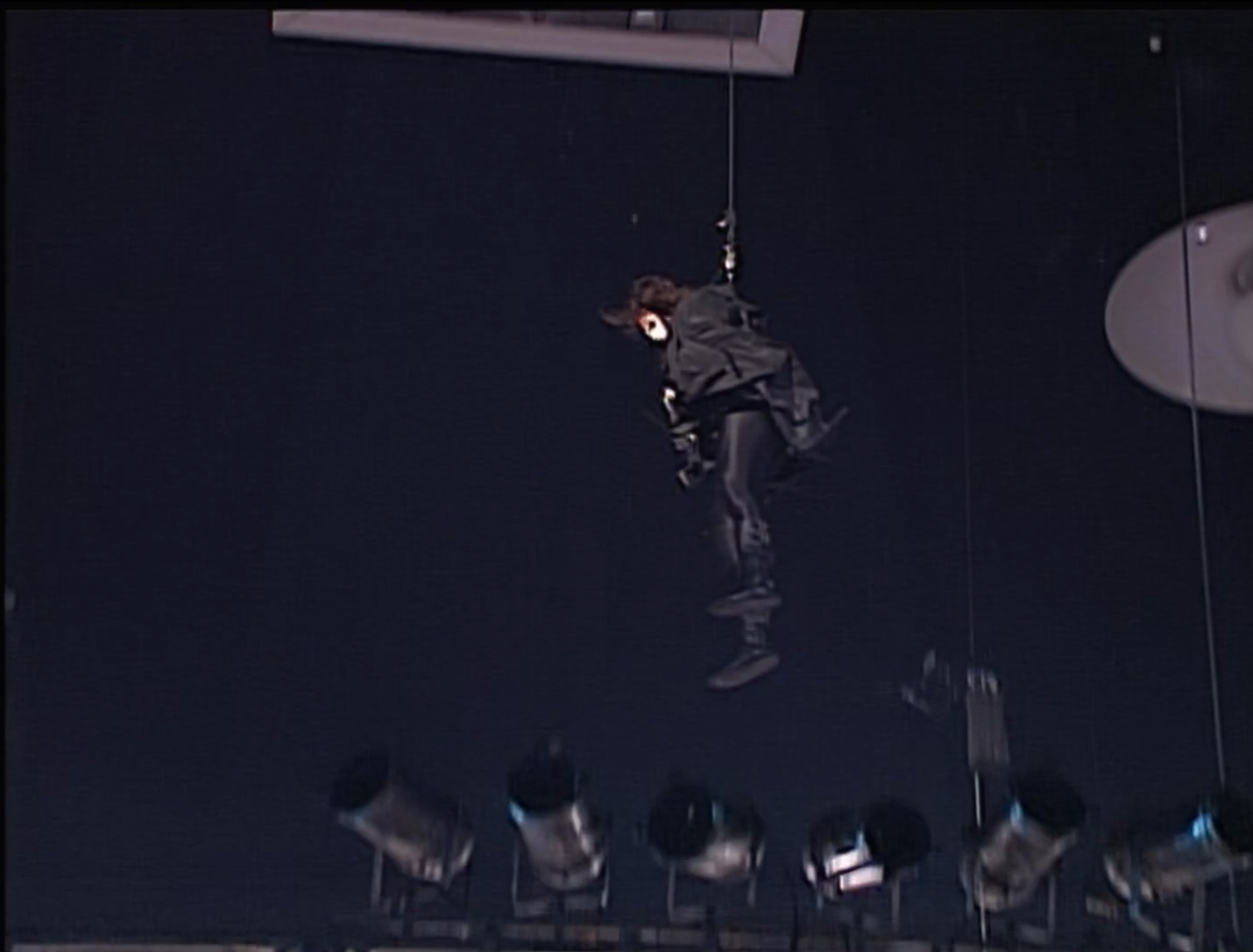 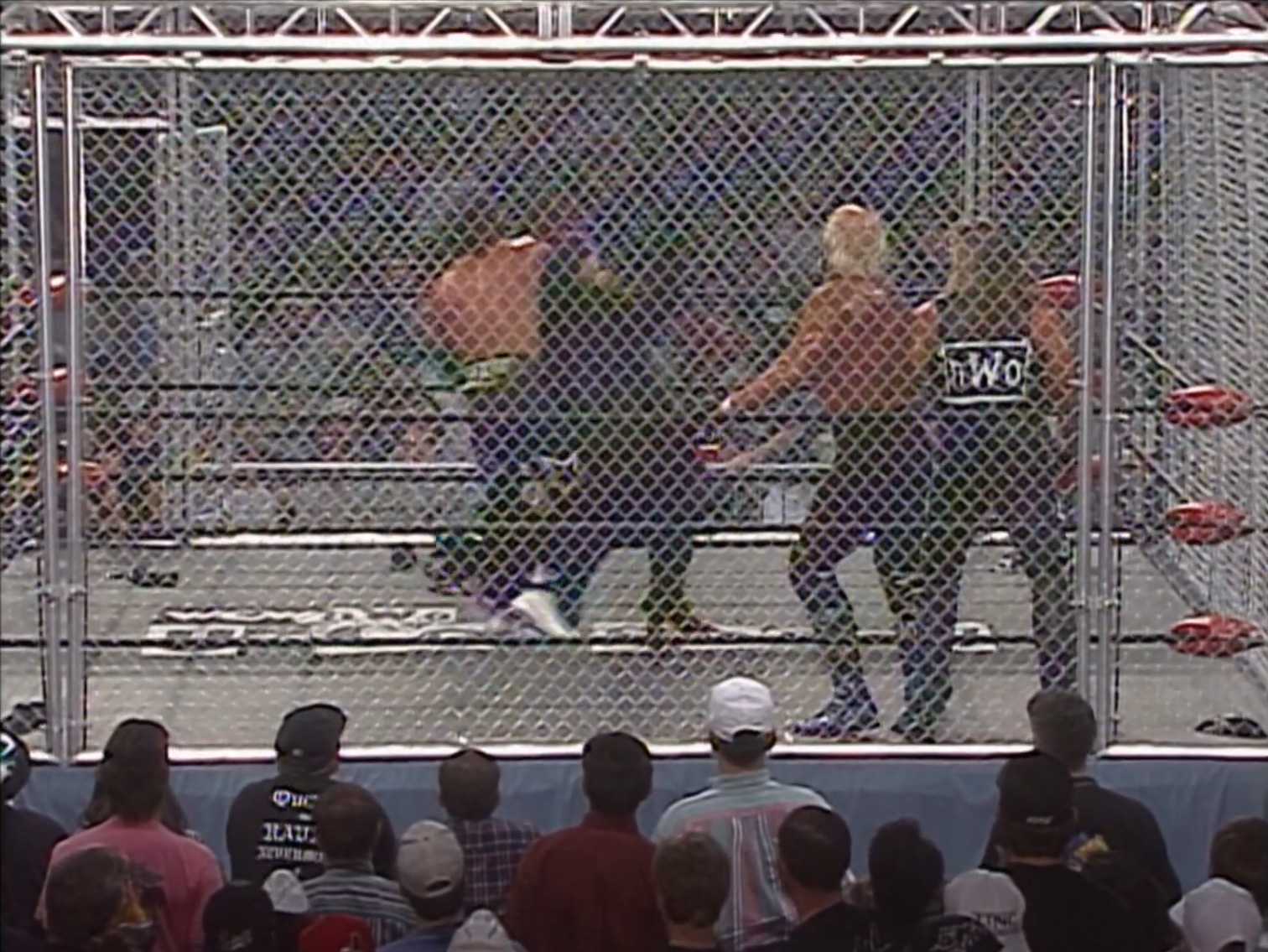 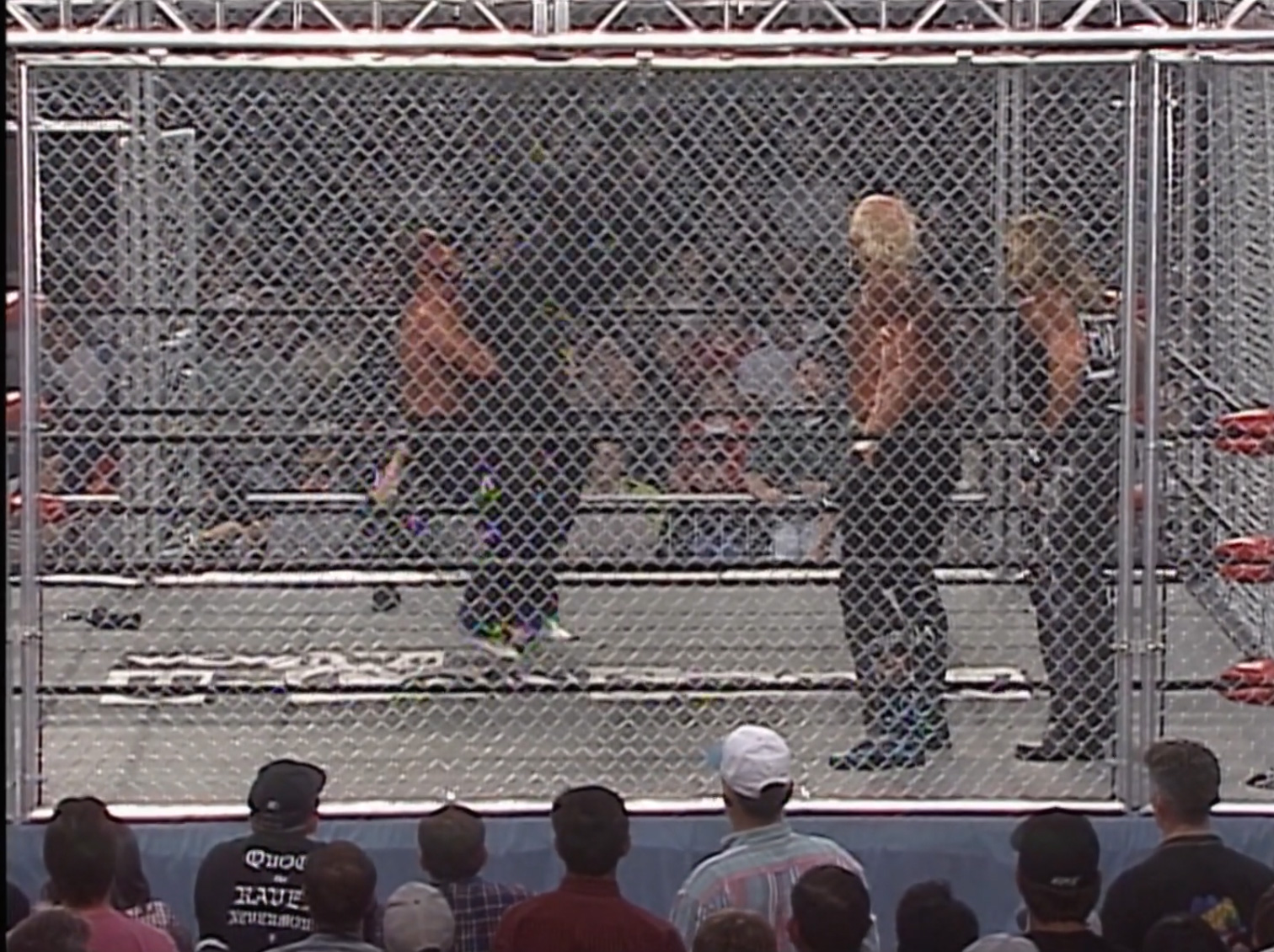 Summary: If Savage hadn’t brought his work ethic to the match, the main event would have sucked balls. As it is, without a finish to a PPV main event, this made WCW look bad.

I understand the angle, but Hogan should have laid down beforehand.

Now, let’s focus on the negatives:

Definitely check out the positives as this show doesn’t completely disappoint. After you finish the triple jeopardy match, turn it off or you’ll wish you had.