With a packed house minutes away from our nation’s capital, who will be in the main event? What does Eddie have up his sleeve for us? Can Goldberg maintain his winning streak? Let’s find out!

In the cold open, Eric Bischoff is in the production truck instructing the crew to NOT show a videotape. As WCW Security Director Doug Dillinger escorts him from the truck, footage from Nitro follows.

Prior to the opening match, Eddie tells Chavo that he’s taking the TV title shot, and Chavo must face Benoit. YIKES!

Summary: Showcase match for Benoit, and the Fairfax faithful are LIVELY!

Bischoff leads Hogan to the ring, and Hogan spews his nonsense. Suddenly, Nash approaches the ring, grabs a microphone, and calls the “heart and soul” of the nWo—the Wolfpack. NC State? Woohoo!

Seriously, Nash then asks Hogan why “Syxx doesn’t have a job…anymore.” Wow! He then fires another shot about Hall being “too dangerous for live TV.” As Hogan offers “(Syxx) can’t cut the mustard” as one explanation, he asks Nash “where da brother (Hall) at?” Nash dangles trust as a main issue within the nWo, so Hogan offers to be his partner tonight against anyone in WCW. Nash accepts. Worked shoot, perhaps? 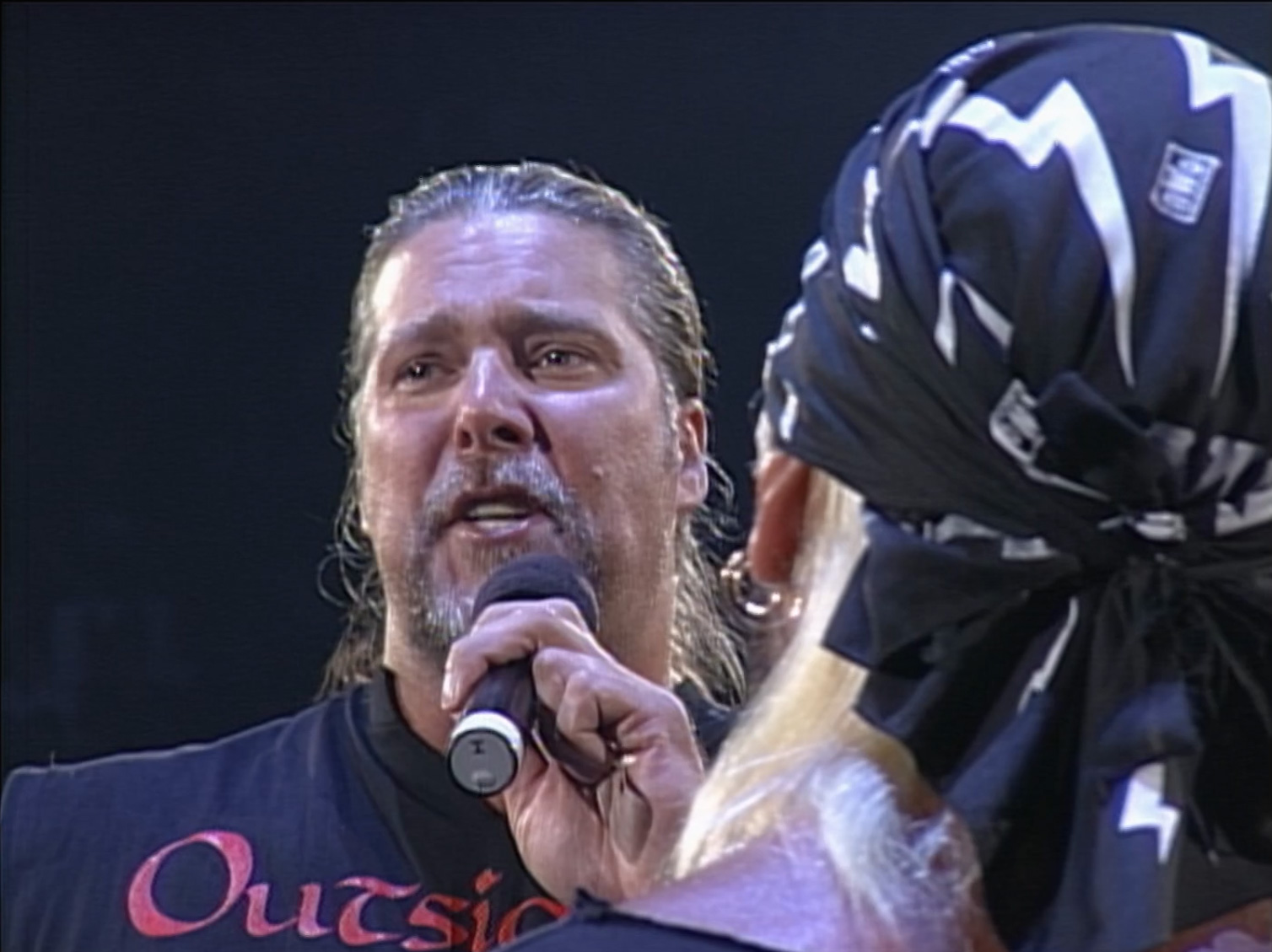 Summary: Showcase match for Iaukea who was a completely different wrestler compared to Monday.

At the entrance, Schiavone interviews Luger who accepts Hogan’s challenge.

Summary: Good work by Disco, but Jericho keeps rolling on.

After the match, Jericho claims Disco’s headband as another trophy.

Summary: Much improved effort for Goldberg who is 62-0.

Prior to the next match, Kidman vows to get revenge against Psicosis for Lodi.

In the ring, Schiavone interviews DDP who states he’ll get the US belt back himself rather than go through JJ Dillon. Next, he touts Sting for their match on Nitro. On the other hand, he believes that Raven = SCUM. That’s not a university acronym. As DDP credits Jake Roberts for his mentoring, he discredits Raven for a lot more.

Summary: Did ANYONE coach them or tell them what the point of the match was? Nobody did anything worthwhile, and nobody got over. Absolute DRECK.

Match 7 for the WCW US title: Diamond Dallas Page (champion) versus Saturn

Summary: More storyline than match as Chavo one-ups Eddie for the first time.

After the match, Eddie puts the foreign object on Chavo’s hand and instructs him to whack Booker T. Begrudgingly, Chavo puts Booker T’s lights out and tosses it back to Eddie. He then reluctantly stomps Booker T at Eddie’s beckoning until Benoit saves Booker T’s bacon.

Summary: From a booking standpoint, having Patrick call for the DQ due to shenanigans would be poor. In lieu of making logic work, WCW booked it to enthrall the Fairfax faithful.

After the match, Rick nails Bagwell with the dog collar and chases his brother Scott away. 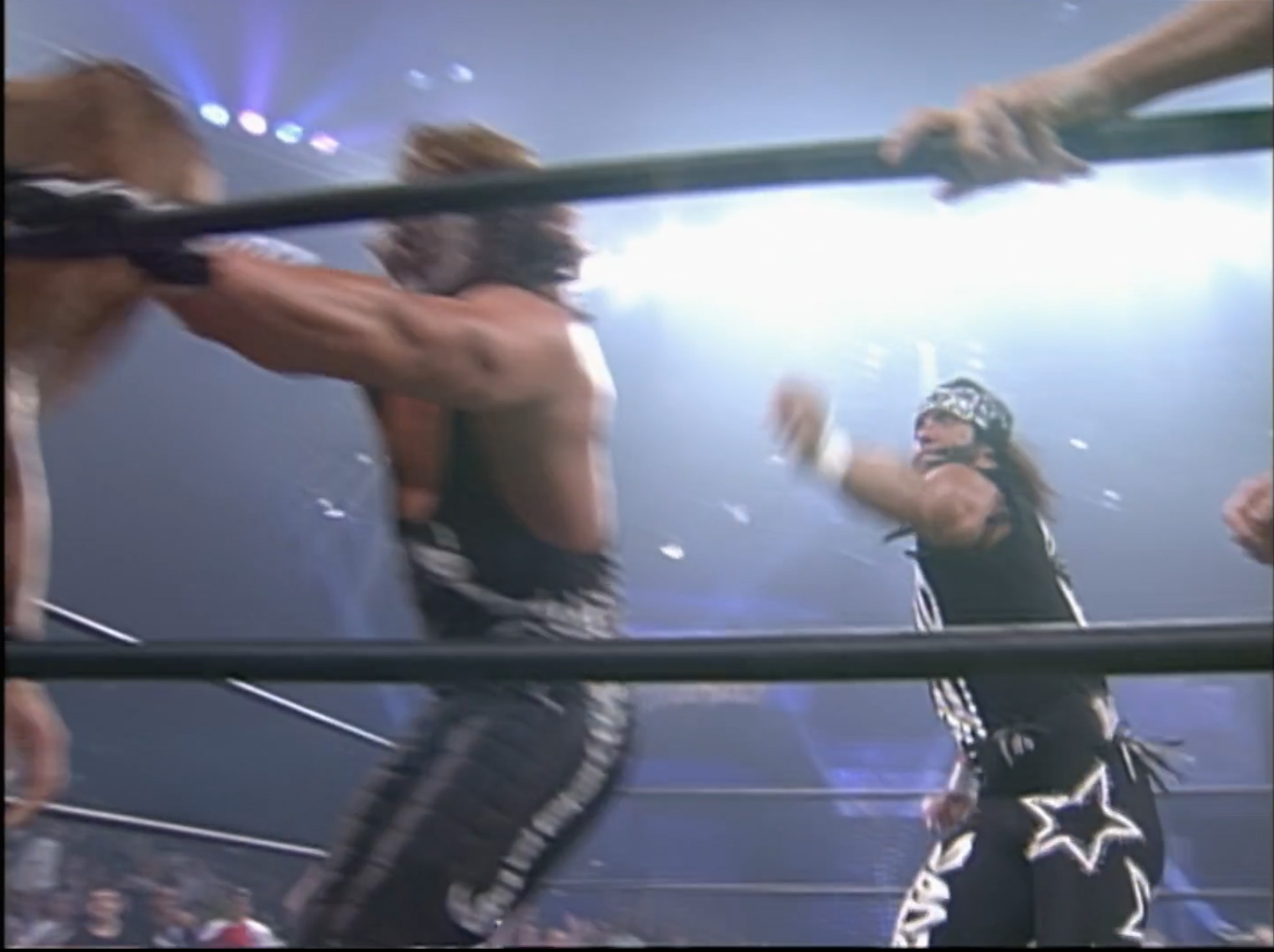 Summary: Once again, more storyline than match as the Savage-Sting saga continues.

After the match, Savage tosses Silverman out of the ring like a rag doll and pummels Sting. Savage decks Luger, but Hogan re-enters the ring to pop him. Meanwhile, the Fairfax faithful litter the ring with concessions. 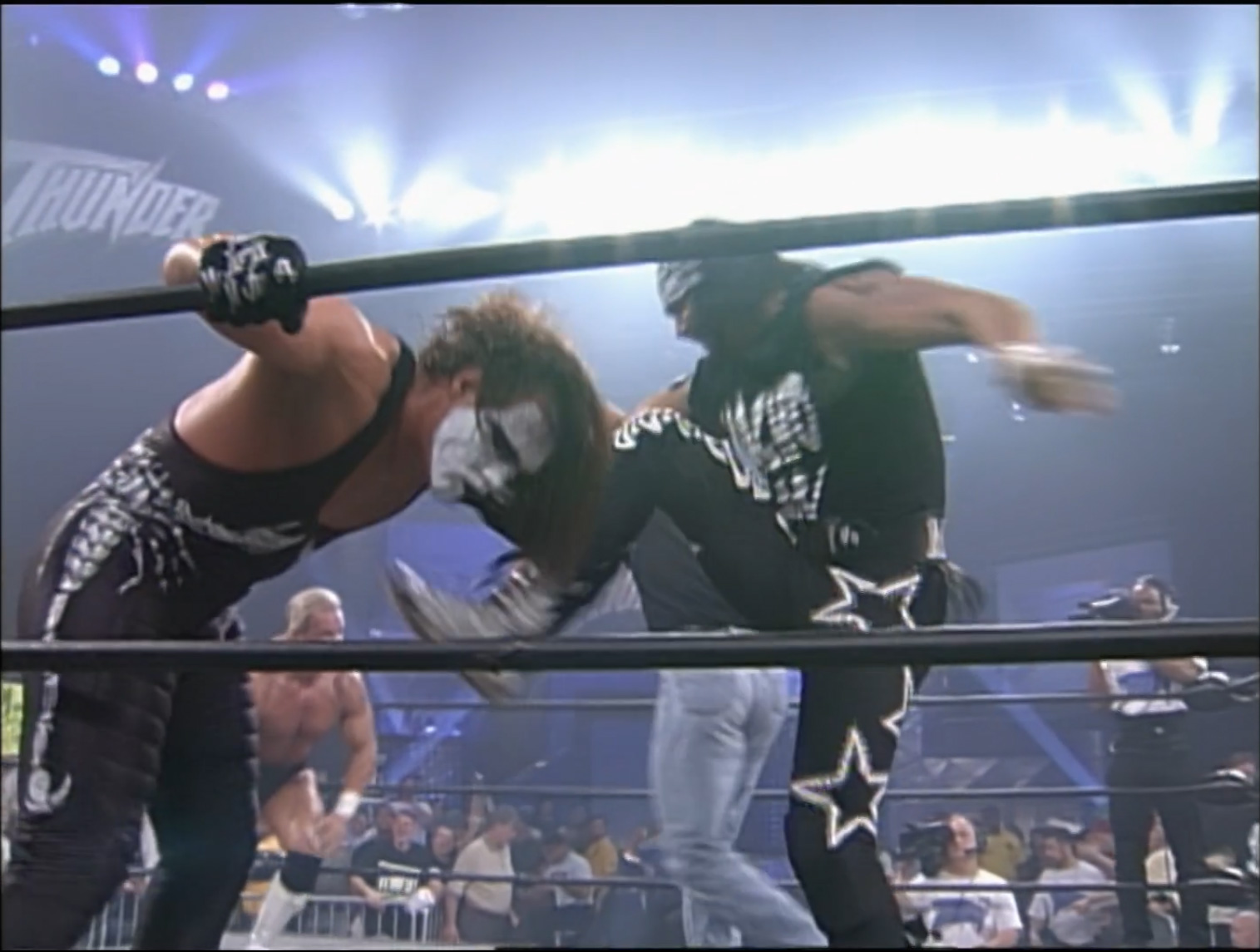 Nash saves Savage’s bacon, gets in Hogan’s face, and the rest of the nWo storms the ring to destroy Sting and Luger. One by one, Luger and Sting eliminate the nWo from the ring with Scott Steiner being the last one removed. 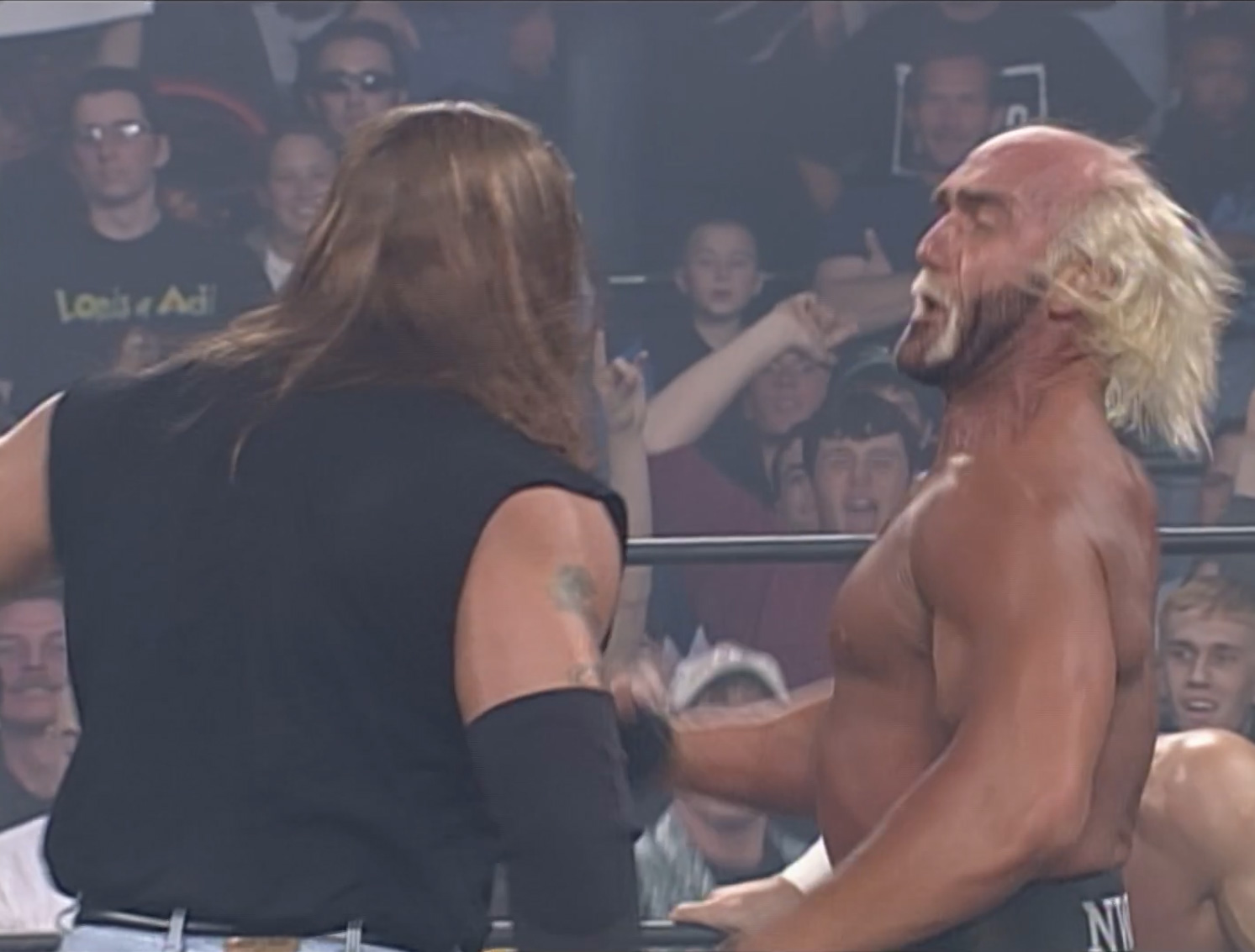 To end the episode, Nash and Hogan get separated by Bischoff, and they walk away “in disarray” according to Schiavone. 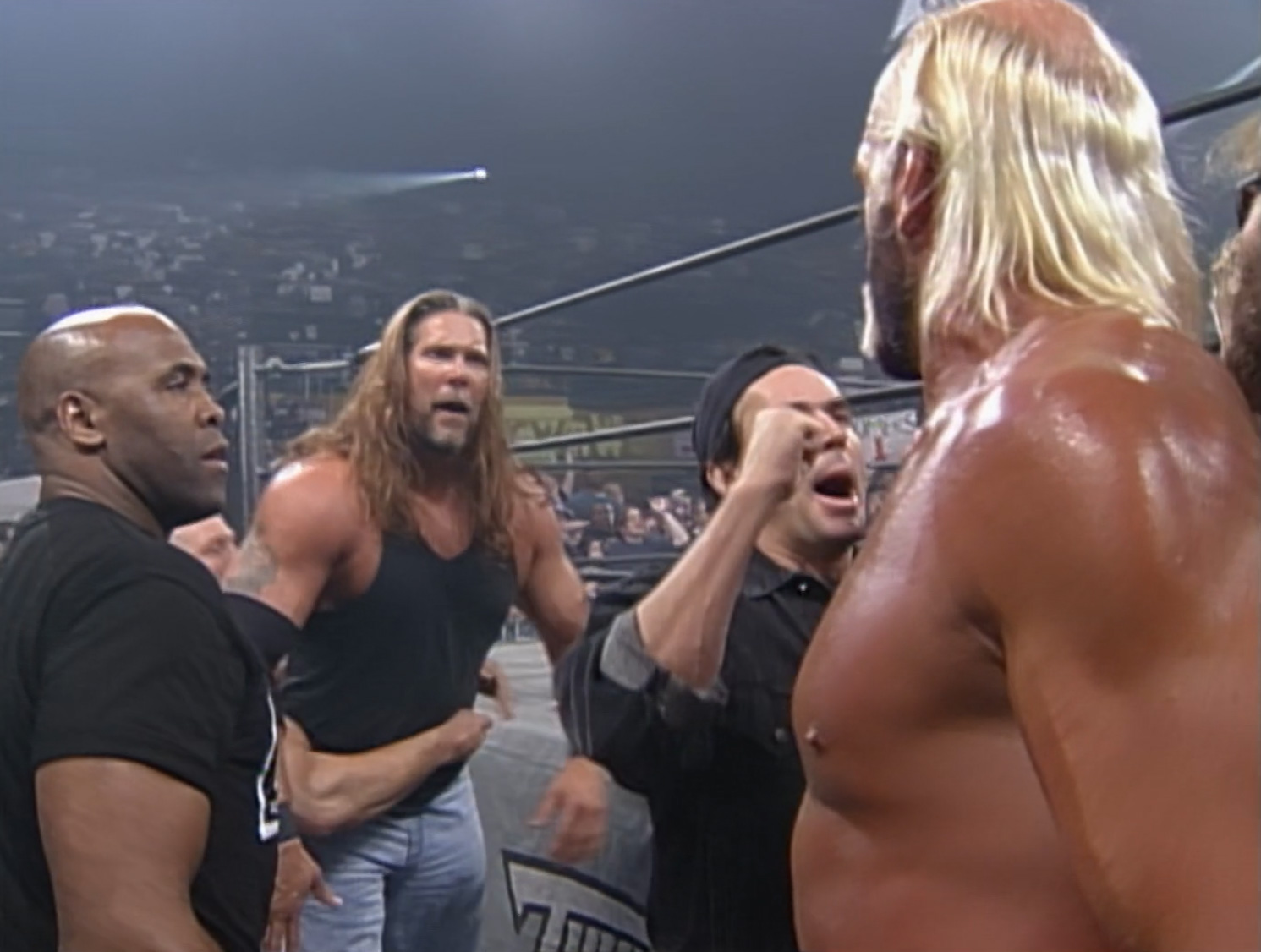 Conclusion: Unlike last week, WCW brings their A-Team to Fairfax for Thunder and gives us a solid show. Tensions run high within the nWo while Savage has problems with both Sting and Hogan. Eddie screws Chavo out of a TV title match, so Chavo screws him back. Jericho takes another trophy, and Goldberg shows more of his repertoire against Flynn than in previous matches. Get all this!