Live from Terre Haute, IN

Can Rick Steiner upend Hennig? Will Jericho lose the Cruiserweight title? How will Benoit fare against Norton? And what’s going on with the US title? Let’s find out!

Prior to the opening match, Jericho runs down Terre Haute or as he put it “Terry Hut.” Luckily, he didn’t call it Jabba.

Summary: Calo gave it his all, but Jericho was that much better.

On WCW Saturday Night, DDP and Benoit square off against Saturn and Hammer. Get all this!

Windham delivered a big boot, but Dandy rebounded with a pair of dropkicks.

At the entrance, Schiavone interviews Hennig along with Rude who states that he “got the job done” by getting rid of Bret. Rude then refers to Bret as the “Zitman.” HA!

Summary: When the announcers react to your botch, it’s time to either stop leapfrogging or work on it.

We then head to MTV Live, and DDP and Raven trade smack while Raven’s audio goes SOUTH. While Raven gives a short soliloquy on the CRTV, he attacks DDP from behind with a STOP sign. He then DDTs DDP through the US title belt and coffee table before heisting the belt.

Summary: Solid psychology from Darsow, but one fatal mistake cost him.

Since it’s March, “Rowdy” Roddy Piper will return to WCW this Monday on Nitro.

Summary: Nagata’s stock is dropping fast as Iaukea chalks up another victory.

We then revisit the PPV from last Sunday when Giant won by DQ. Next, we revisit Nitro when Nash performed a cannonball. Since Hall is on hiatus, his trip to the pool is not shown.

Summary: Jannetty sold extremely well, but the bigger Adams stopped him in his tracks.

We then revisit Nitro when Sting rappelled from a helicopter down to the ring. Since WCW has spent a lot of money on it, they want to ensure that you’ve seen it. On an episode of Legends of Wrestling, Mick Foley takes Eric Bischoff to task for his overacting during that segment. HA!

Summary: Good match with plenty of high-flying, workrate, and psychology.

Summary: The advantage of having Vincent kept Norton from losing. It appears that Benoit’s push has stalled.

Summary: Showcase match for Goldberg who is allegedly 56-0.

After the match, Saturn jumps the railing, but Raven holds him back.

Afterward, Rude enters the ring to stomp Rick, but DiBiase also enters to fight with him. Hennig nails DiBiase down US-150 SOUTH, and the nWo double-teams Rick. When Rude exits to further inflict pain upon DiBiase, Rick reverses an Irish whip by Hennig and hooks an overhead belly-to-belly suplex. More members of the nWo minus Scott Steiner storm the ring to assist Hennig. Are we seeing another nWo beatdown to end a WCW telecast?

Suddenly, Traylor hits the ring to aid Rick, but the nWo subdues him immediately. While Rude punishes Traylor, DiBiase and Vincent rekindle their feud from earlier in the decade. Rude then helps Vincent by choking out DiBiase.

As if an alarm went off backstage, Goldberg rushes to the ring, vaults over the top rope and spears both Hennig and Adams simultaneously. Norton tries to attack Goldberg but gets speared. As Goldberg returns backstage on his own, Traylor and Rick keep the nWo at bay to end the show. 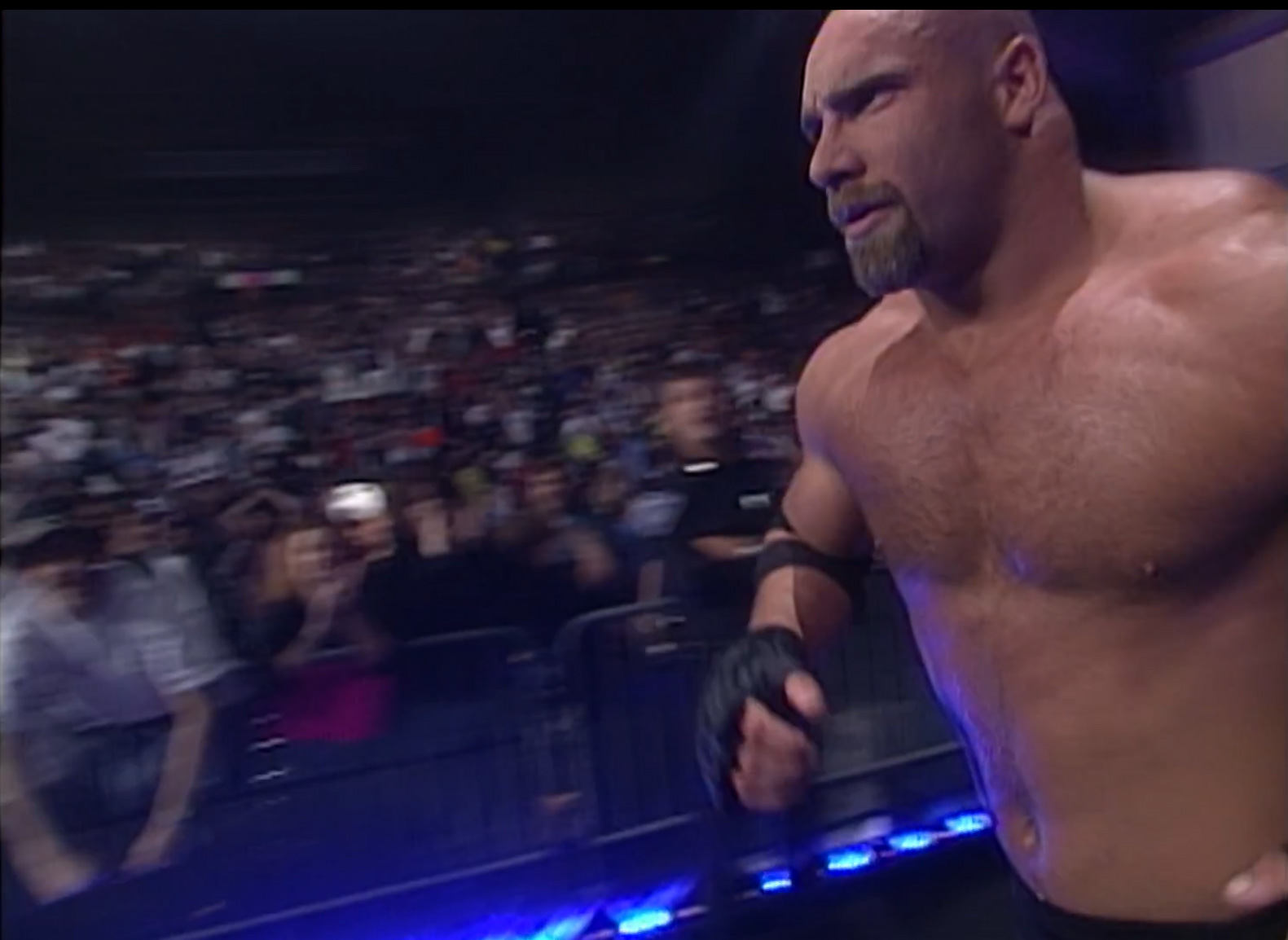 Conclusion: Since WCW knew they couldn’t top Sting’s rappelling from a helicopter, they did the next best thing—sic Goldberg upon the now. While this episode held some competitive matches, it holds zero historical value. Check out the main event for the Goldberg save, but skip the rest.