It’s the go-home show for Uncensored '98! What blockbuster main event will we see to whet our appetite? What other title match will we see? Will Giant survive tonight’s episode and make it to the PPV to face Nash? Let’s find out!

Prior to the opening match, Giant emerges through the entrance while wearing a neck brace. Upon entering the ring, he cuts a promo on Kevin Nash. Stupidly, he challenges the ENTIRE nWo “by (him)self.” 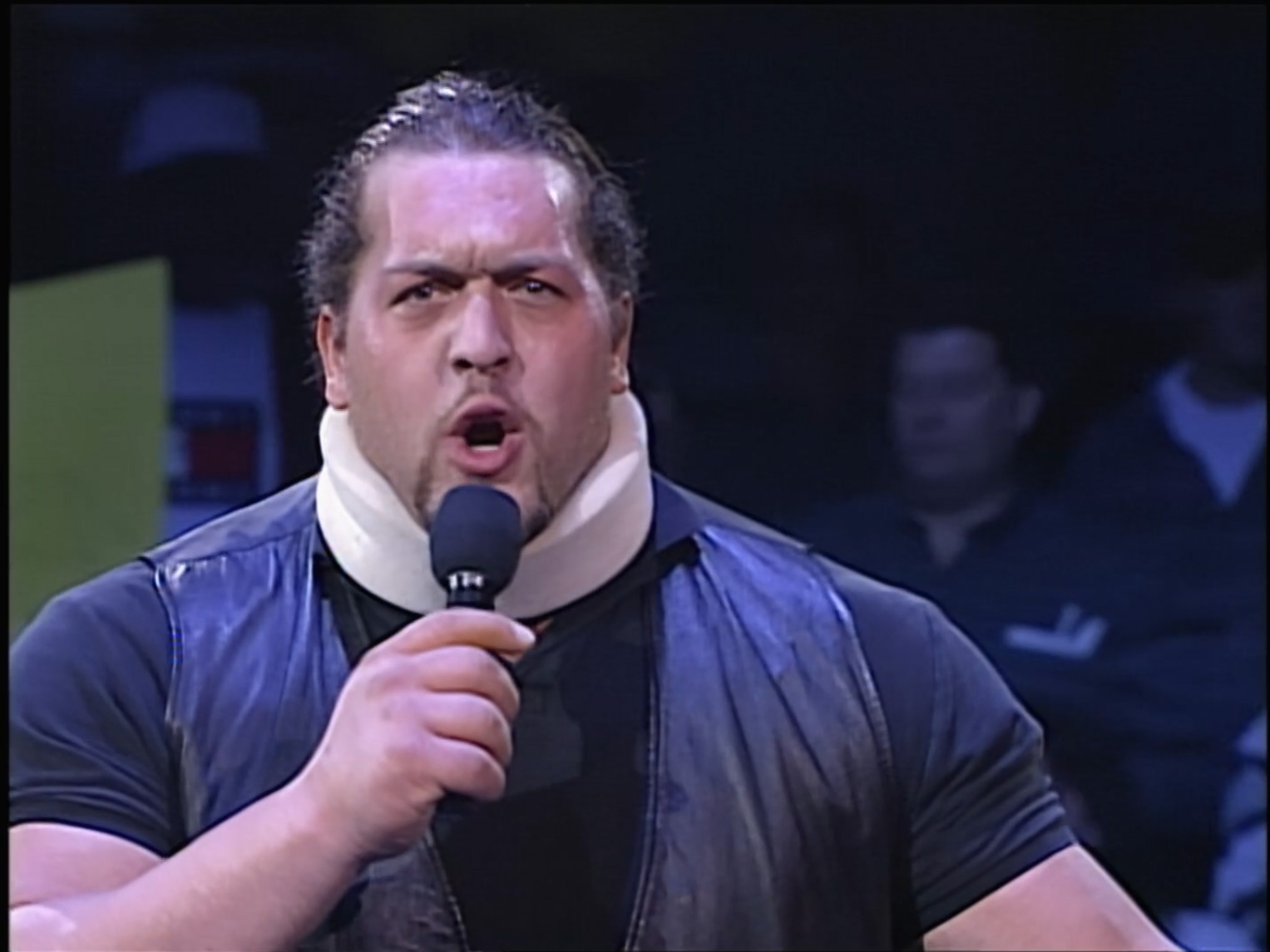 Savage, along with Elizabeth, heads to the ring, questions Giant but relishes his logic. As Savage mentions the WCW World title, Sting saunters to the ring. He clarifies to Savage that it’s (his) title. Savage questions timing of the match, so Sting offers him a title shot for TONIGHT. That’s our main event, folks. 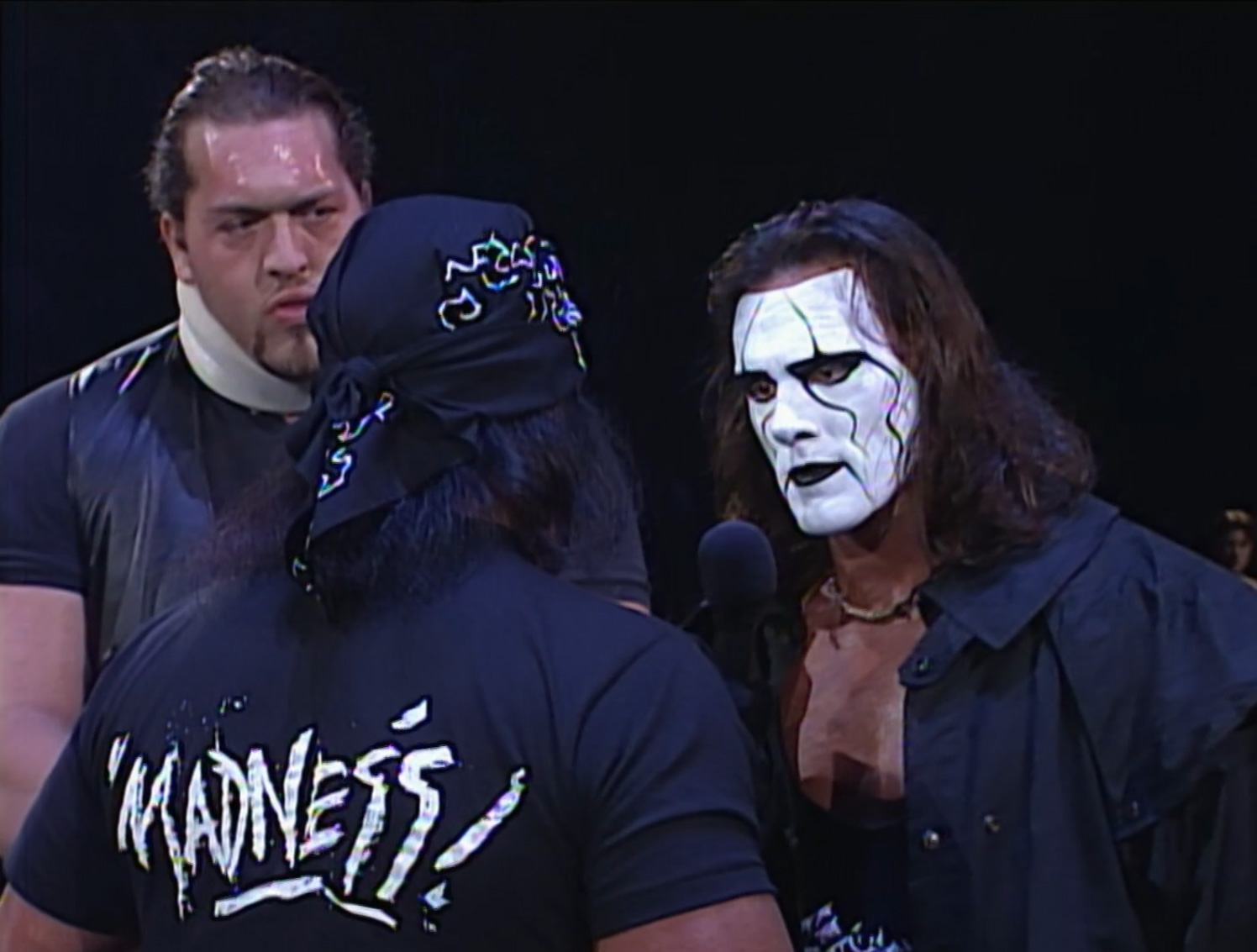 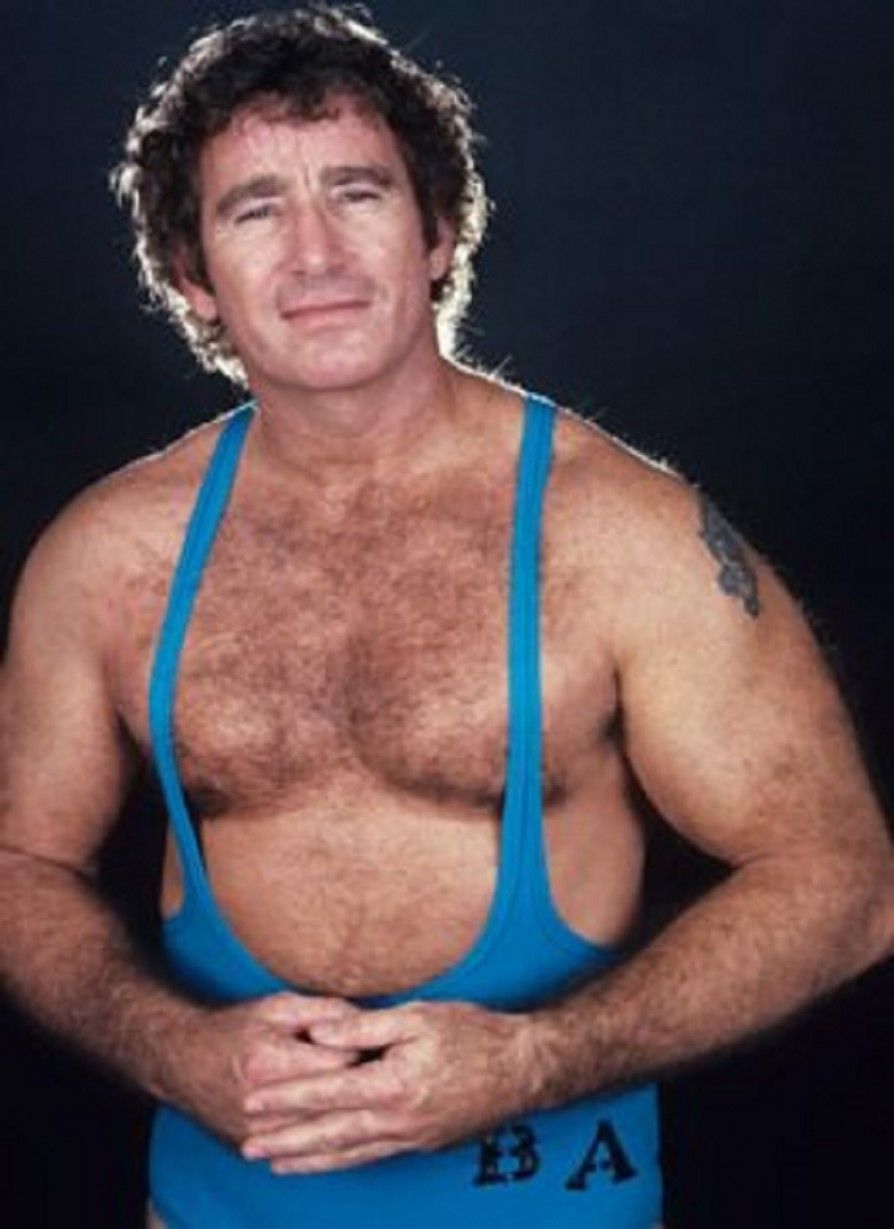 Summary: Showcase match for Raven, but what was the point?

At the entrance, Schiavone interviews Jericho who is wearing Mysterio’s t-shirt, Guererra’s mask, and the Cruiserweight title belt. In lieu of waiting until Sunday, Jericho offers Malenko a title shot TONIGHT. While he claims to be the “master of 1,004 holds,” Jericho also professes to be a “collector of trophies.” He vows to change Malenko’s finishing move to the “Canadian Jericho Leaf.” HA! 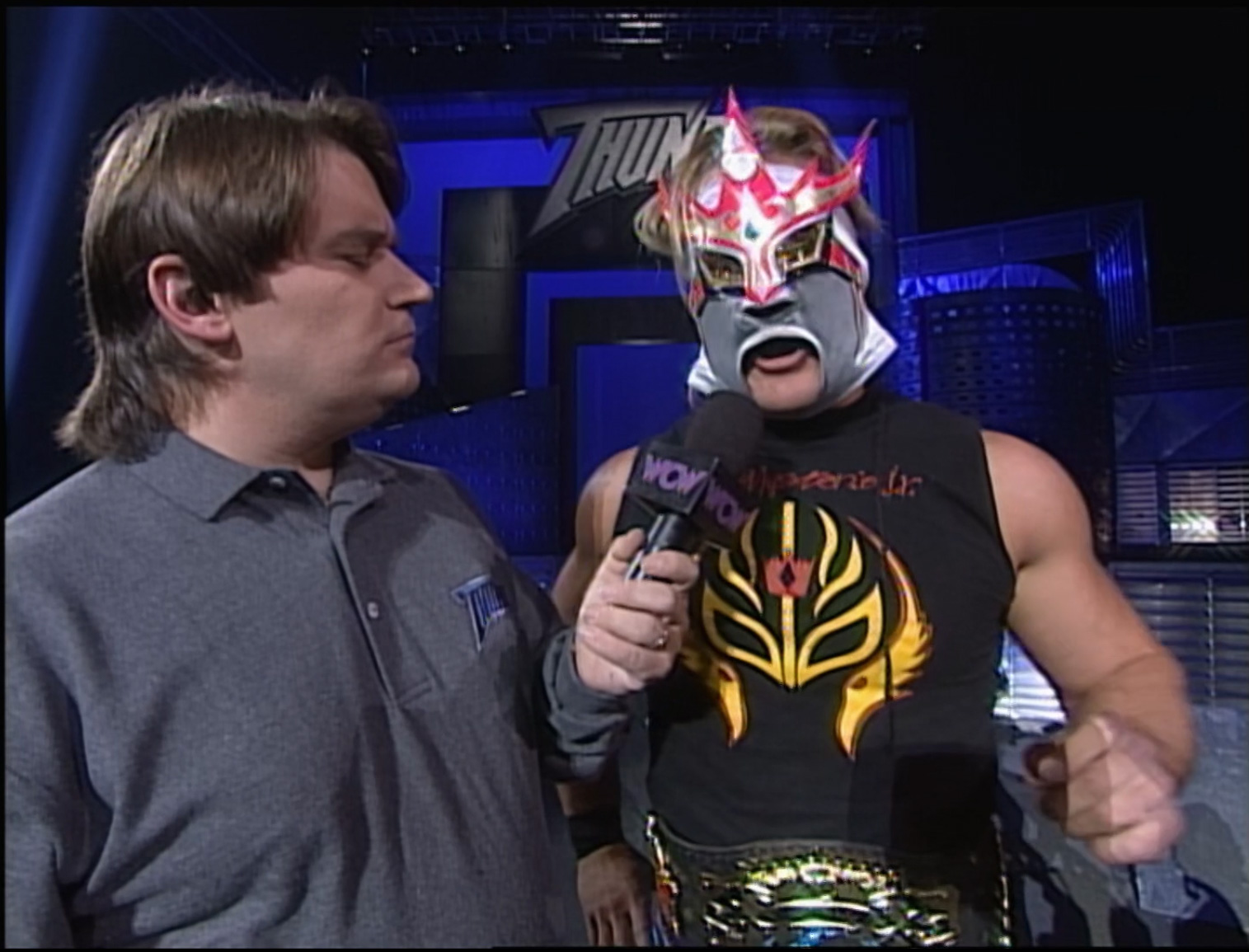 Summary: Showcase match for Duggan, but why does WCW recognize the competition? In this case, Windham is a born-Texan wearing black trunks and a goatee. Coca-Cola doesn’t give Pepsi Cola the time of day. Why should WCW?

On WCW Saturday Night, the “British Bulldog” Davey Boy Smith and Jim “The Anvil” Neidhart try to put a dent in the nWo as they face Curt Hennig and Brian Adams.

Summary: Can you smell grunge-flavored squash? Scott Steiner sure can.

At the entrance, Schiavone interviews Eddie Guerrero who chastises his nephew. When Chavo emerges, he gets in Eddie’s face. Eddie challenges him to a match with the stipulation that if Chavo loses, he becomes Eddie’s slave. Chavo counters with the stipulation that if he wins, Eddie does things the “Guerrero way.” Without hesitation, Eddie accepts the challenge, and Chavo heads to the ring.

Summary: Albeit short, this was an action-packed match as Eddie gained control over his nephew.

While the standard nWo theme plays, Tenay name-drops Jimi Hendrix to notify us that “Hollywood” Hogan was on his way to the ring. I realize it may cost a pretty penny, but pony up, WWE Network. It’s worth it to hear “Voodoo Chile.” Nevertheless, Eric Bischoff and Scott Hall accompany Hogan to the ring. Meanwhile, Bischoff grabs a “fan’s” sign: 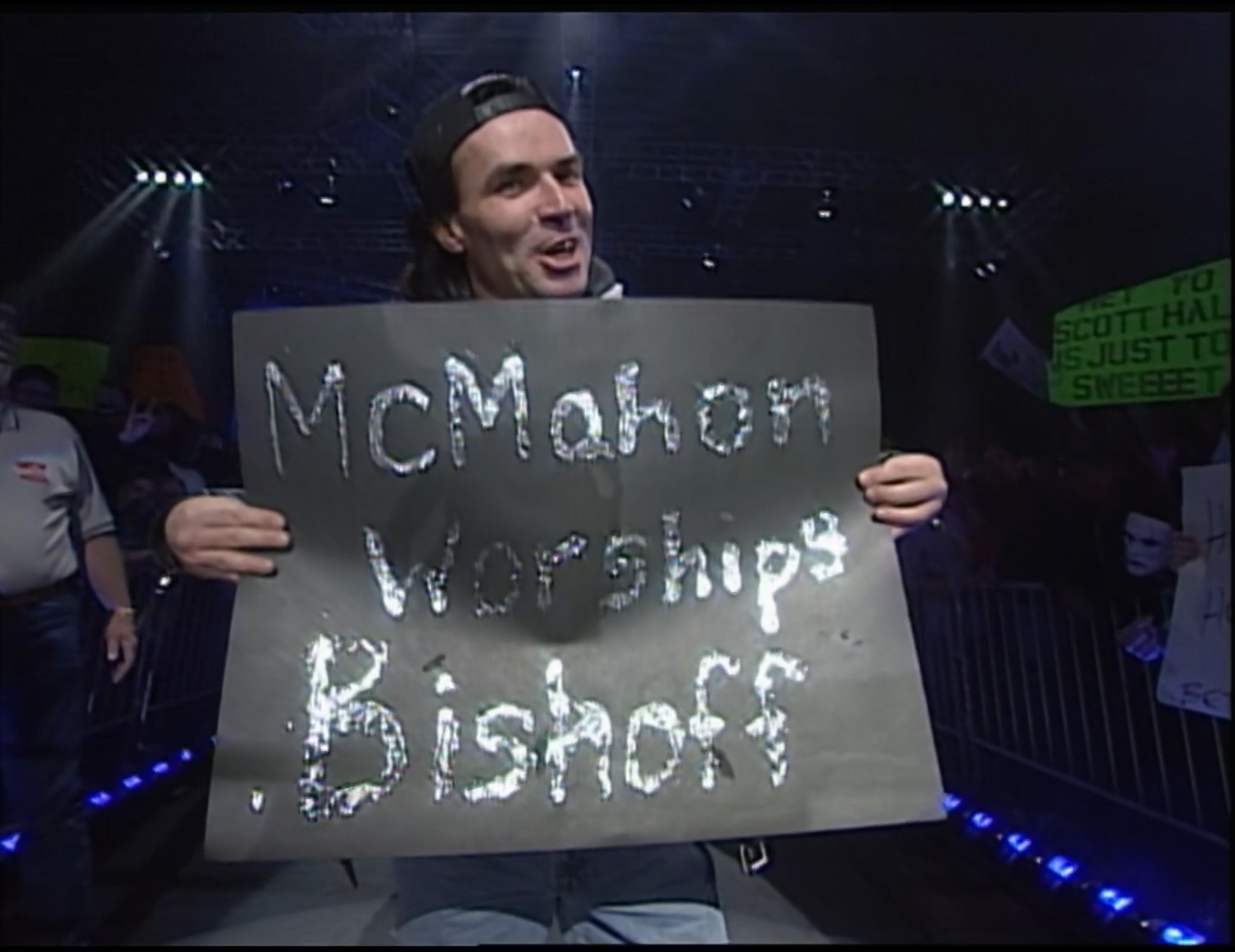 Bischoff refers to Giant as “mega-dumb.” While Hogan verbally dissects Giant for his beating tonight, Hall, looking like he lost his best friend, offers peaceful words. That’s probably because he’s standing next to his boss.

After the match, Konnan tries to unmask Lizmark, but Juventud Guerrera hits the ring as well as a springboard dropkick to thwart his efforts. When Guerrera turns his attention to Lizmark, Konnan attacks him from behind. Evil! Moronically, Guerrera mounts the top turnbuckle, but Konnan bumps the ropes to crotch him. He then suplexes him down to the mat and flings him with a hair mare.

At the entrance, Schiavone interviews Curt Hennig and “Ravishing” Rick Rude. As Rude claims there’s a “bounty” on Bret from “Connecticut,” he’d rather have “self-gratification.” TMI!

On the other hand, Hennig states that his match with Bret will be “(probably)…one of the greatest wrestling matches of all time.” Rude adds that the upcoming episode of WCW Monday Nitro will be “Hart-less.” Clever!

Video airs promoting the upcoming “triple jeopardy” match between DDP, Raven, and Benoit at the PPV.

Summary: Saturn certainly supplied the workrate while Disco hung in there as long as he could.

Match 7: Giant versus the entire nWo

Summary: What was the meaning of this?

Afterward, WCW Security arrives to escort Giant who gets chained rather than handcuffed. Nash walks through the entrance to intercept Giant. While he laughs about Giant’s predicament, Nash splashes “hot coffee” in his face. An enraged Giant BREAKS THE CHAINS and chases Nash backstage. Was this a tribute to Dokken? 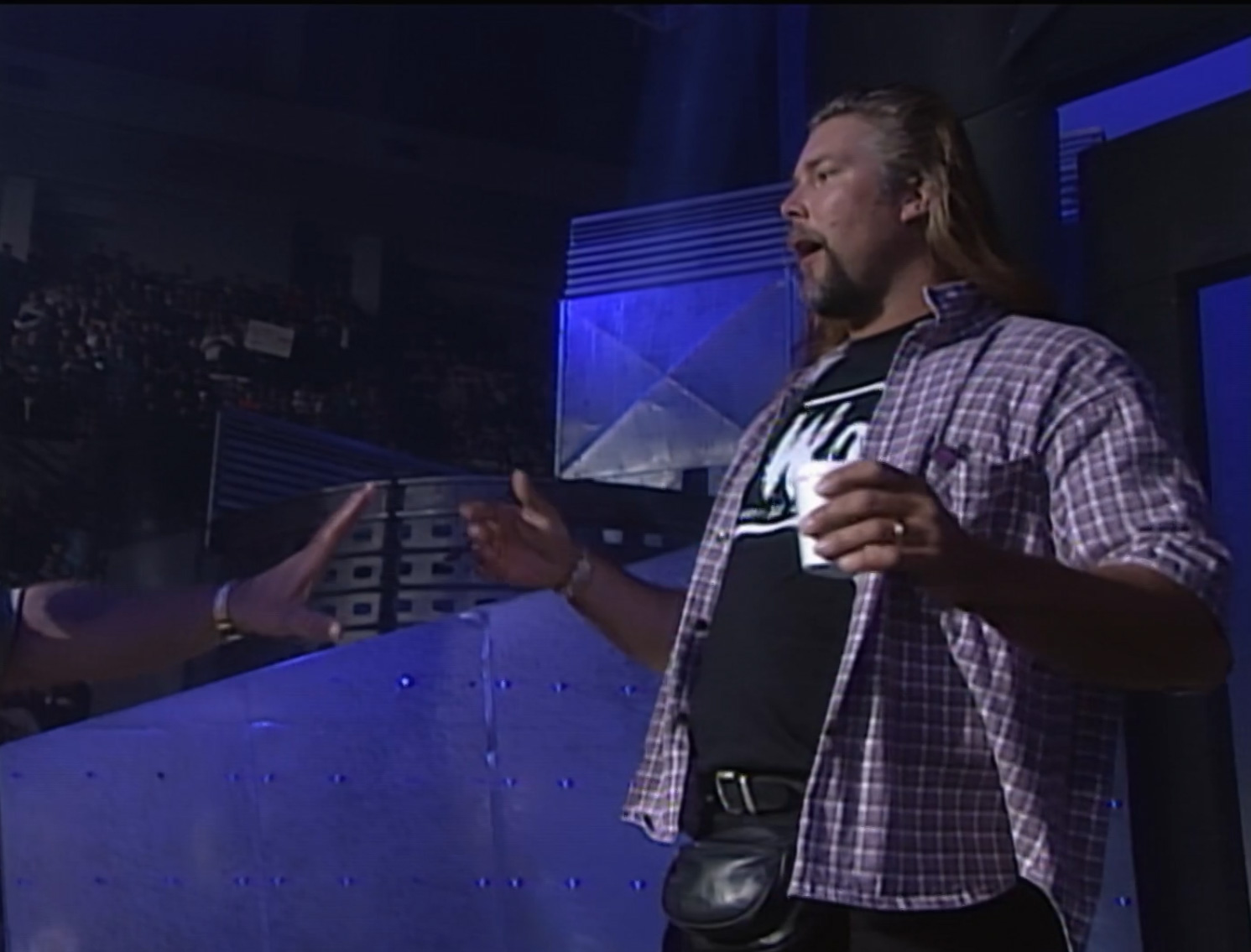 Summary: Quite the upset just days away from the PPV.

After the match, Malenko removes the mask to reveal…Rey Myserio, Jr! No, it’s Lenny Lane, but what a great ruse. Nevertheless, the REAL Jericho ambushes Malenko from behind and nails Lane just to be a dick. To put the exclamation point on how he fooled Malenko, Jericho applies a LionTamer to him. 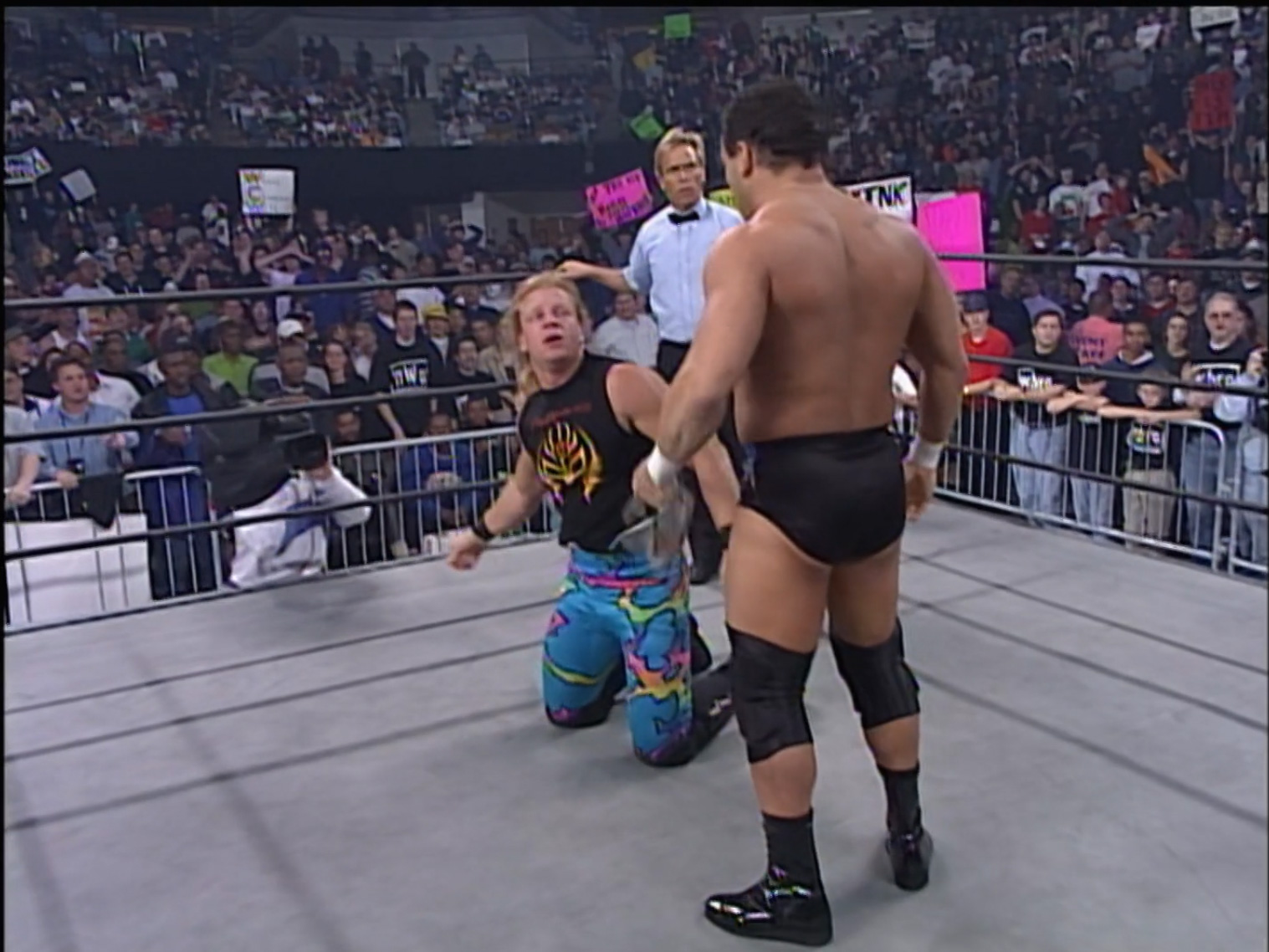 Summary: More storyline than match as the Luger-Scott Steiner match at the PPV gets some added flavor.

After the match, Rick Steiner hits the ring and backdrops Norton over the top rope to the floor. Scott Steiner exits the ring in fear but gets hammered by Luger. The babyfaces steamroll Norton and Scott Steiner much to the delight of the Baton Rouge faithful.

Summary: More of a tease of any potential match between them than anything else.

Afterward, Sting, still wearing his long jacket, brawls with Hall while Hogan joins the fray to fight with Savage. The babyfaces clear the ring until Hogan summons the rest of the nWo. With the babyfaces surrounded, the nWo jumps in the ring but get rebuffed back to the floor. More nWo troops arrive to fight Hogan and Hall’s battle, and Sting waves for something to happen.

As Disciple stands prominently among the now, Sting and Savage find a safe spot on the floor, From there, Sting straps Savage in, and both propel to the ceiling to fight at the PPV.

Conclusion: Quite the exciting ending to a show that tempted us with upcoming PPV matches along with coherent storylines to up the ante. This is quite the fun show to get you amped for the PPV.