What’s up with Adams and Savage? How will Hogan be involved? Can Raven win the US title from DDP? Will Benoit have anything to say about it? Let’s find out!

Video of Savage receiving The Harvard Lampoon Real Man of the Year award opens the show. 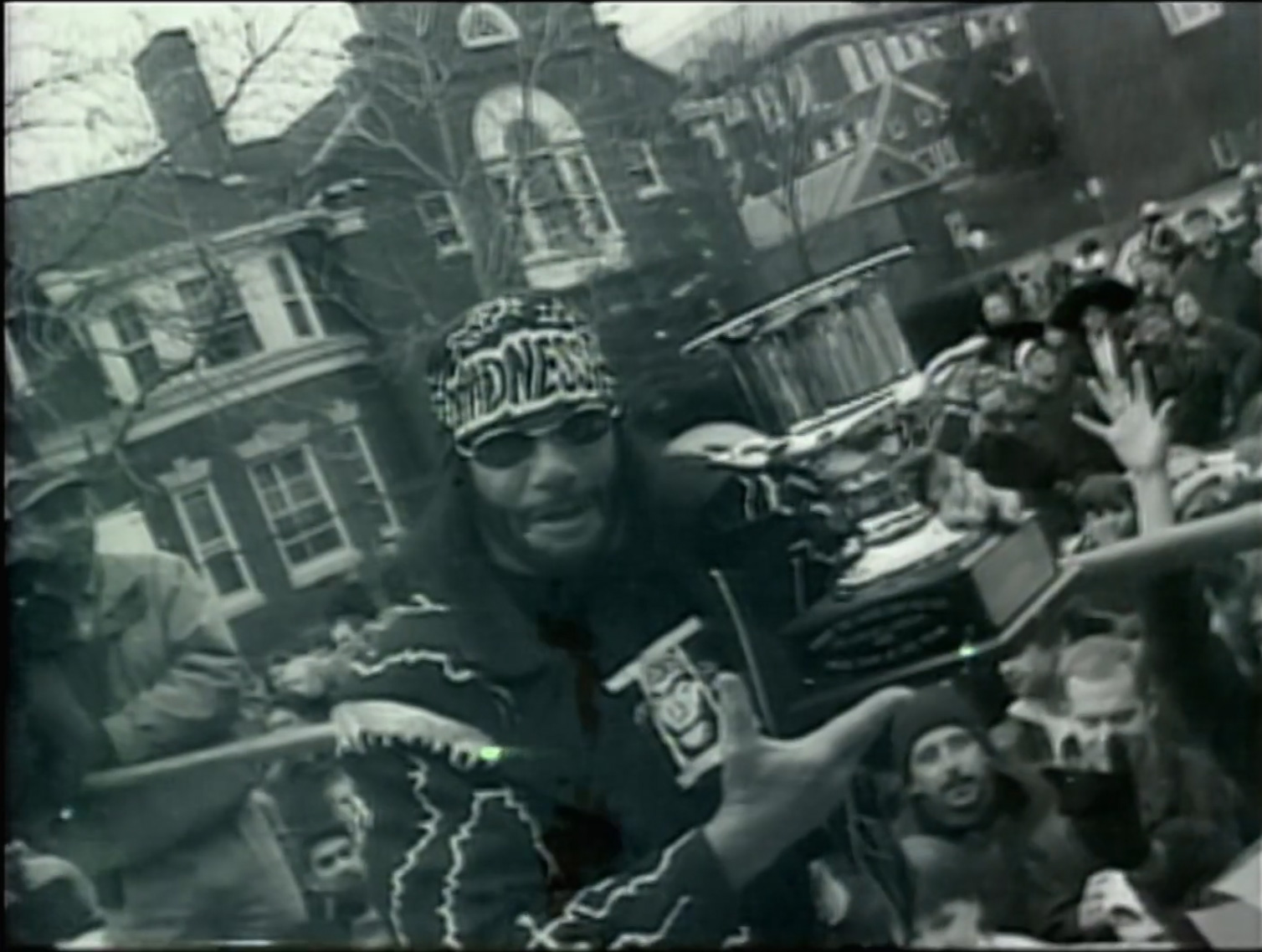 Hogan, along with the entire nWo minus Savage, approaches the ring. As Eric Bischoff runs down Savage, the Columbus faithful LOUDLY chants “Hogan sucks.” Are we sure we’re not in Charlotte, NC? Nevertheless, Hogan spews non-stop garbage and jokes about Elizabeth’s “skinny legs.”

Adams chimes in and asks Hogan if he could beat up Savage tonight.

Summary: Showcase match for Goldberg, and the Columbus faithful LOVED him.

Summary: Iaukea surprisingly brought the goods, but Eddie found a way to win.

For some odd reason, the Nitro Girls are here for Thunder. What could they possibly say? I’m betting they want an OSU guy to buy them a plate of Johnny Marzetti. Nonetheless, they plug their upcoming Nitro Party at Duke University this Monday. 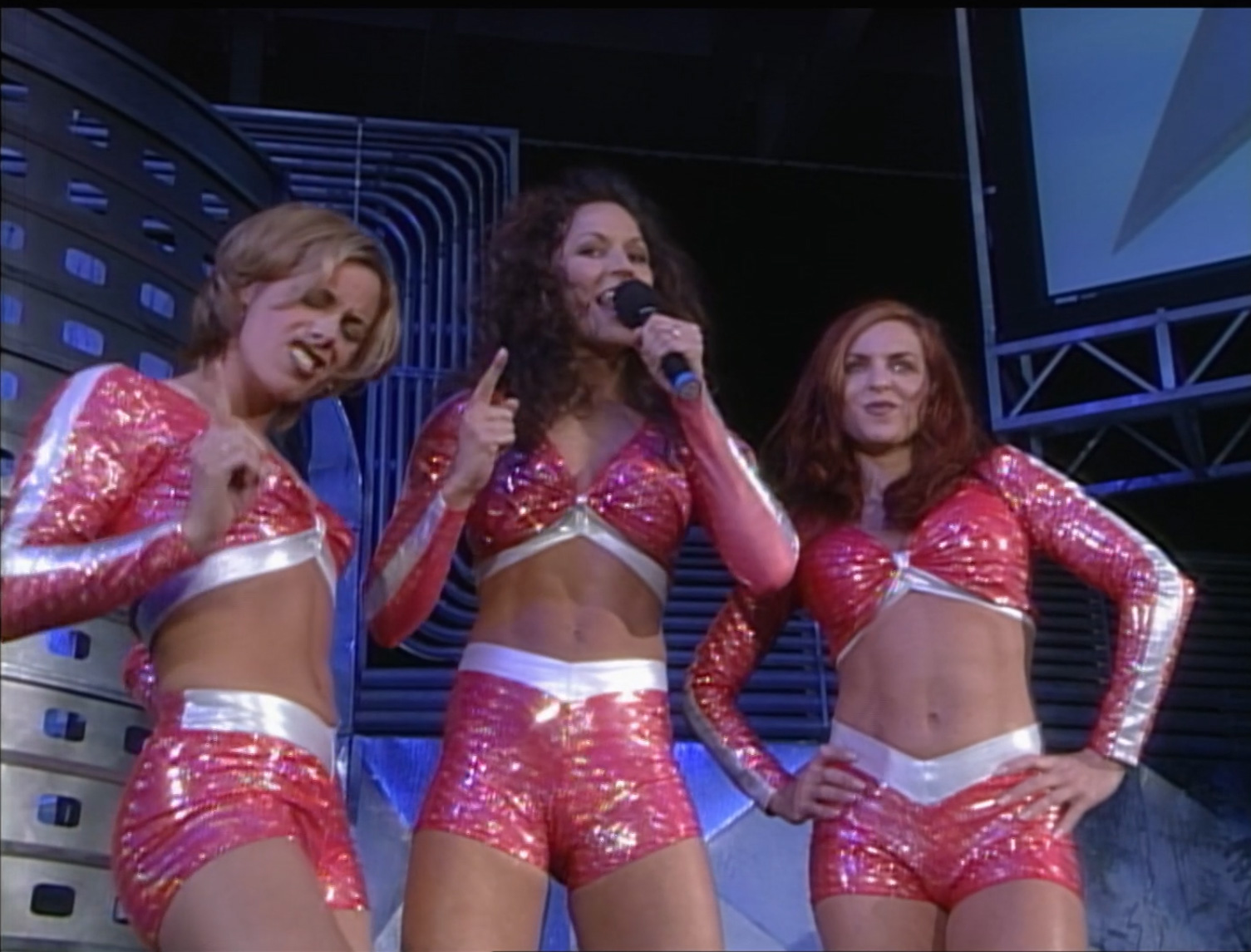 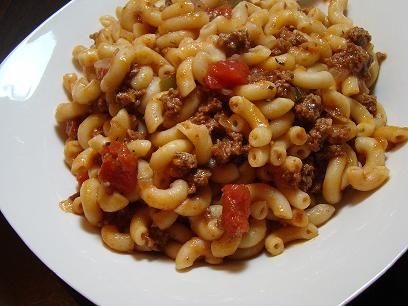 Spice mentions the Nitro Party at the University of Tennessee but neglects their mention their torturous journey to Philly last Monday. When they show their support for Duke in the 1998 ACC Tournament, the Columbus faithful boo them out of the building! Methinks that’s not what WCW was trying to accomplish.

Summary: Good match as El Dandy made Guerrera look like all that and a bag of chips.

Never mind. I must be hungry. Who has a Snickers I can borrow?

After the match, Konnan approaches the ring, refers to him by his real name, and challenges Guerrera to a match on Nitro. Guerrera responds with “always ready” and “never surrender.”

Following a commercial break, Savage arrives in the ring and calls out both Adams and Hogan. Bischoff leads them out, but Savage advises Hogan about the Caesarian atmosphere of the nWo. While the Columbus faithful chant “Mach-o,” Savage equates Hogan to “a horse with a broken leg,” promises to send Hogan “to the glue factory,” and accepts Adams’ challenge for tonight. 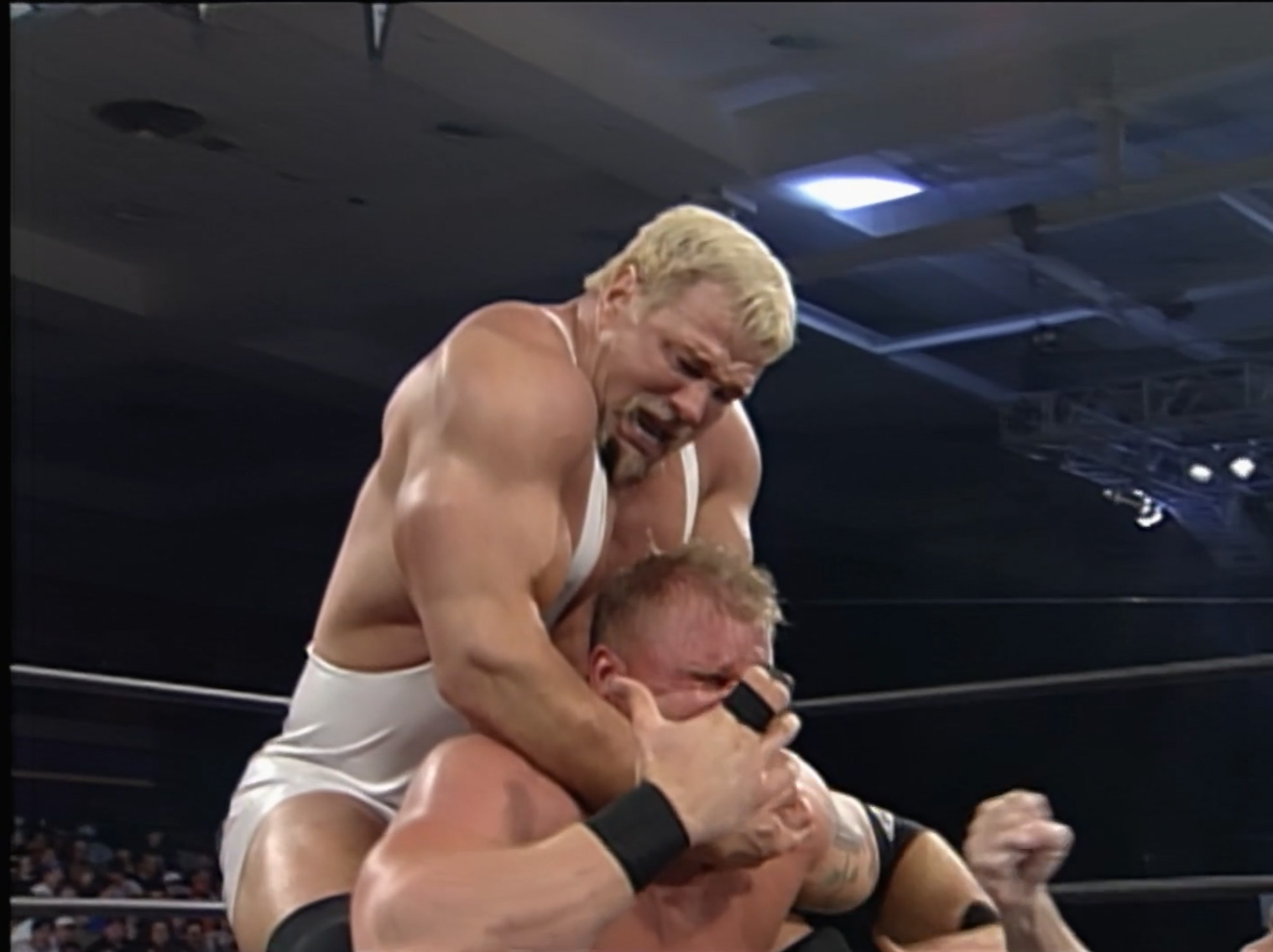 Summary: Showcase match for Scott. Due to its offensive connotation, the nickname “White Thunder” was removed from Scott. I wonder what he’ll use instead.

Summary: This was merely a message from Hennig to Bret that his brother-in-law is no match for him.

After the match, Rude and Hennig pummel Neidhart until Davey Boy Smith chases them off.

In the ring, “Iron” Mike Tyson Tenay interviews Raven who slumps in the corner. Raven cuts a promo on DDP and vows to win the US title.

Video airs of Jericho who puts on a clinic about promo skills.

Summary: To this day, Jericho might still be ashamed to be involved in this mess. I’d be surprised if we ever see Ciclope again.

After the match, Jericho refuses to release the hold until Malenko storms the ring to pull him off Ciclope. He then sends Jericho into the corner and secures a belly-to-back suplex and wraps him in a Texas Cloverleaf. This feud has legs.

Match 7: Scott Norton versus the Renegade

Afterward, Giant powerbombs Norton to the extreme delight of the Columbus faithful. Renegade objects to Giant’s interference because it cost him the match. Unfazed, Giant chokeslams him so hard that Renegade transforms into a Buckeye donut. 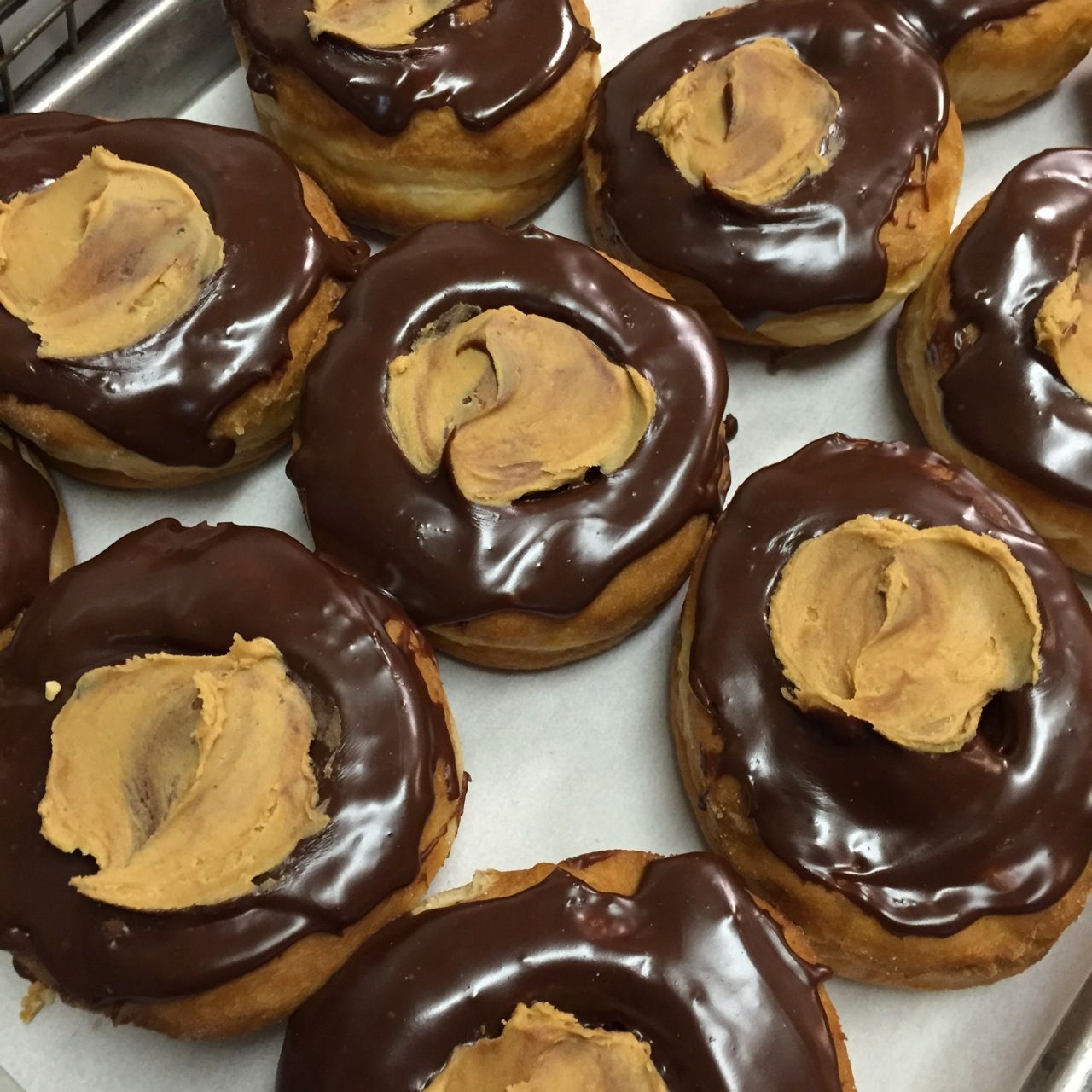 Obviously, WCW Security wants a word with Giant, but he cuts a promo on Nash first. Doug Dillinger, instead of using handcuffs, wraps a chain around Giant’s wrists before leading him backstage.

Prior to the next match, Raven grabs the microphone and tells DDP to beg for forgiveness. DDP enters the ring and advises Raven where exactly his forgiveness is. The camera’s positioned incorrectly, but I bet you can figure out what DDP means. He then agrees to Raven’s rules but adds DDP’s rule by telling referee Nick Patrick to “hit the road.”

Match 8 for the WCW US title: Diamond Dallas Page (champion) versus Raven (w/ the Flock)

Summary: This was a preview of the thrupple match at Uncensored ’98. Meltzer mentioned that Benoit had issues with Raven and DDP’s using him to have better matches, so Benoit requested a schmozz so that all three could be involved. We’ll see what happens at the PPV.

After all of this happened, the chocolate-peanut butter guy dumps Benoit on his back with a modified belly-to-back/sidewalk slam type of maneuver. DDP, ever the licorice guy, implements a discus clothesline to rid the ring of the peanut butter-chocolate enigma. Raven then supplies DDP with a DDT while Saturn locks Benoit in a Rings of Saturn.

Prior to the next match, Savage grabs the microphone and acknowledges that Elizabeth managed both of them. As he asks Elizabeth who the “real man” is, she answers in his favor. Savage then turns the tables on Hogan and questions Hogan’s marriage. Somebody get my coat. It just got COLD in here. 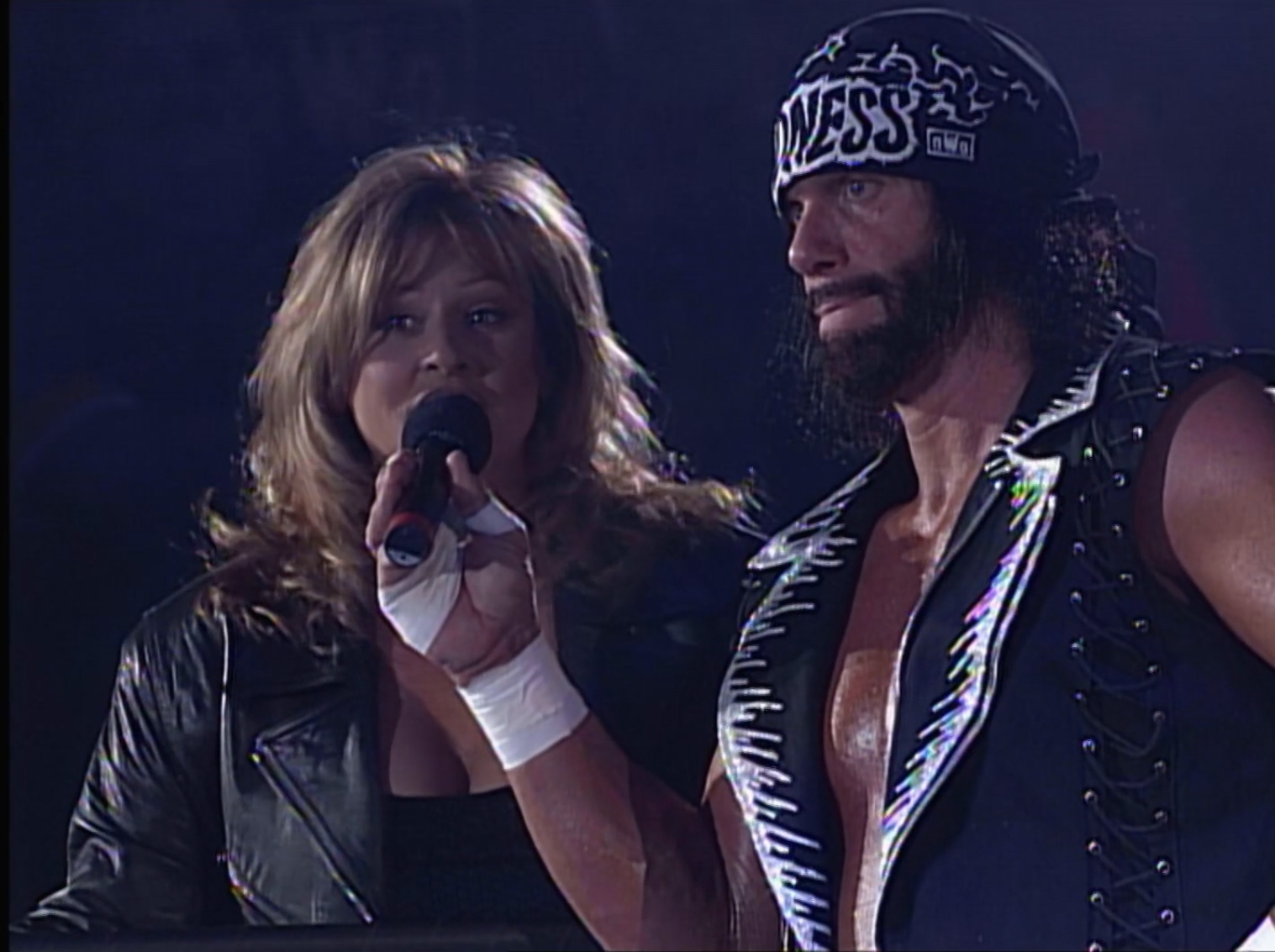 Summary: More storyline for the upcoming steel cage match at the PPV.

Afterward, Disciple drops Savage with an Ace Crusher, and the remainder of the nWo hits the ring to pummel Savage. As Elizabeth begs WCW Security to help Savage, the Columbus faithful chants “we want Sting.” Hogan drops a leg, but Sting answers the Columbus faithful’s plea and chases the nWo from the ring. 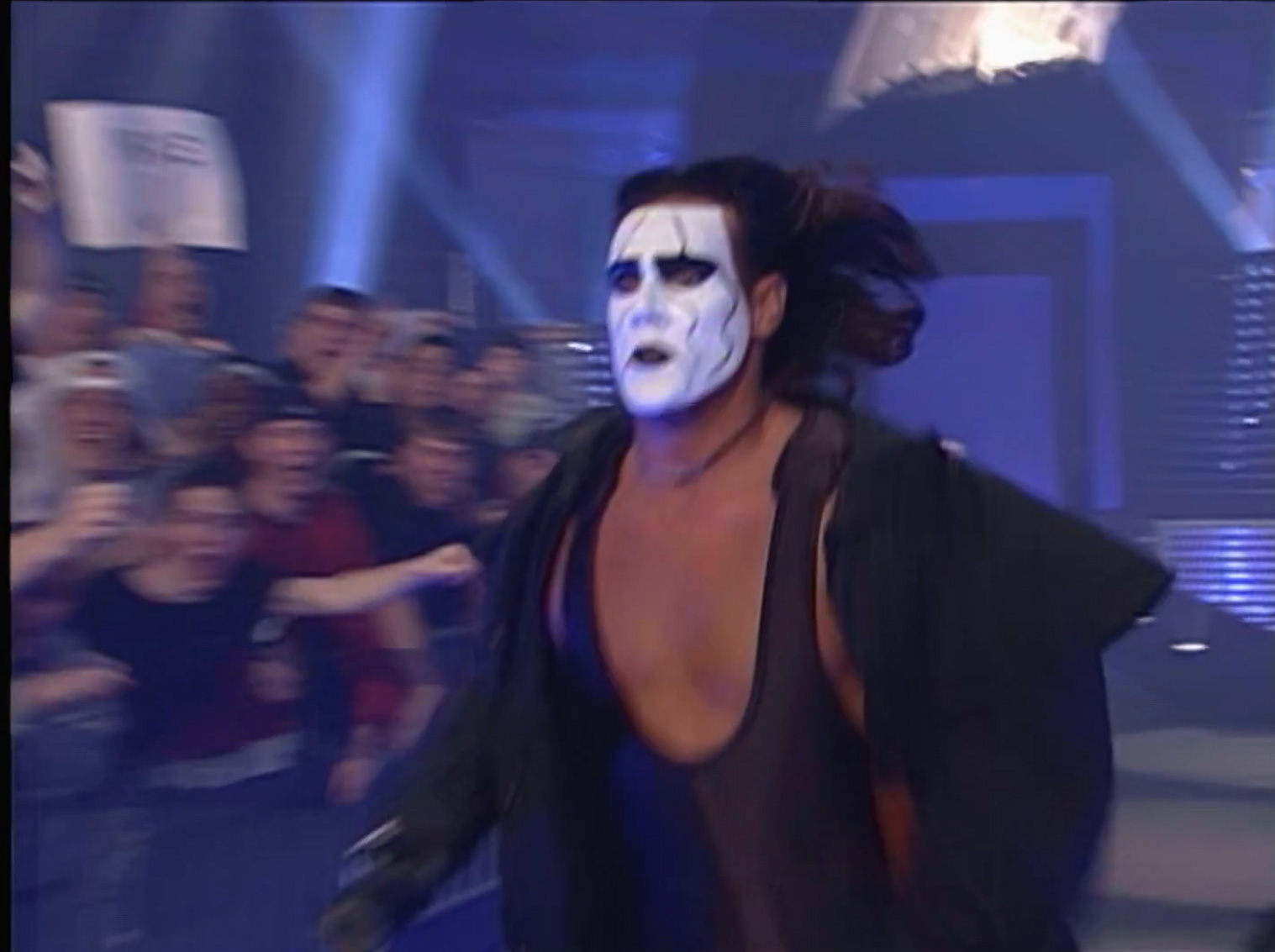 Conclusion: This episode had a heavy dose of Hogan and Savage. If that’s not your cup of tea, then this episode doesn’t mean much to you. Neither Scott Hall nor Kevin Nash appeared on the show although their names got dropped. Neither main event happened, and I blame the WWF for its bait-and-switch on Monday for giving WCW the idea to bait-and-switch on Thursday.

Seriously, this episode must have a death curse. After all, Eddie Guerrero, Ray Traylor, Chase Tatum, Mark Curtis, Curt Hennig, Rick Rude, Renegade, Chris Benoit, Brian Adams, Elizabeth, and Randy Savage are no longer with us. Let’s hope Nitro has a livelier set of characters.