How will the saga between Hogan and Savage play out right before the PPV? Will DDP and Benoit succeed against the Flock or implode pending their match at the PPV? And who will challenge the Outsiders prior to their upcoming tag title match at the PPV? Let’s find out!

Earlier today, “Iron” Mike Tenay interviews Jericho backstage; however, the nWo rushes by them to pummel the “Total Package” Lex Luger and “Macho Man” Randy Savage. Hogan and Hennig then WHACK Savage’s back with a chair and belt respectively. The nWo then carries the battered Savage into the arena while leaving Luger laying. With Savage in tonight’s main event, methinks it will be cancelled. 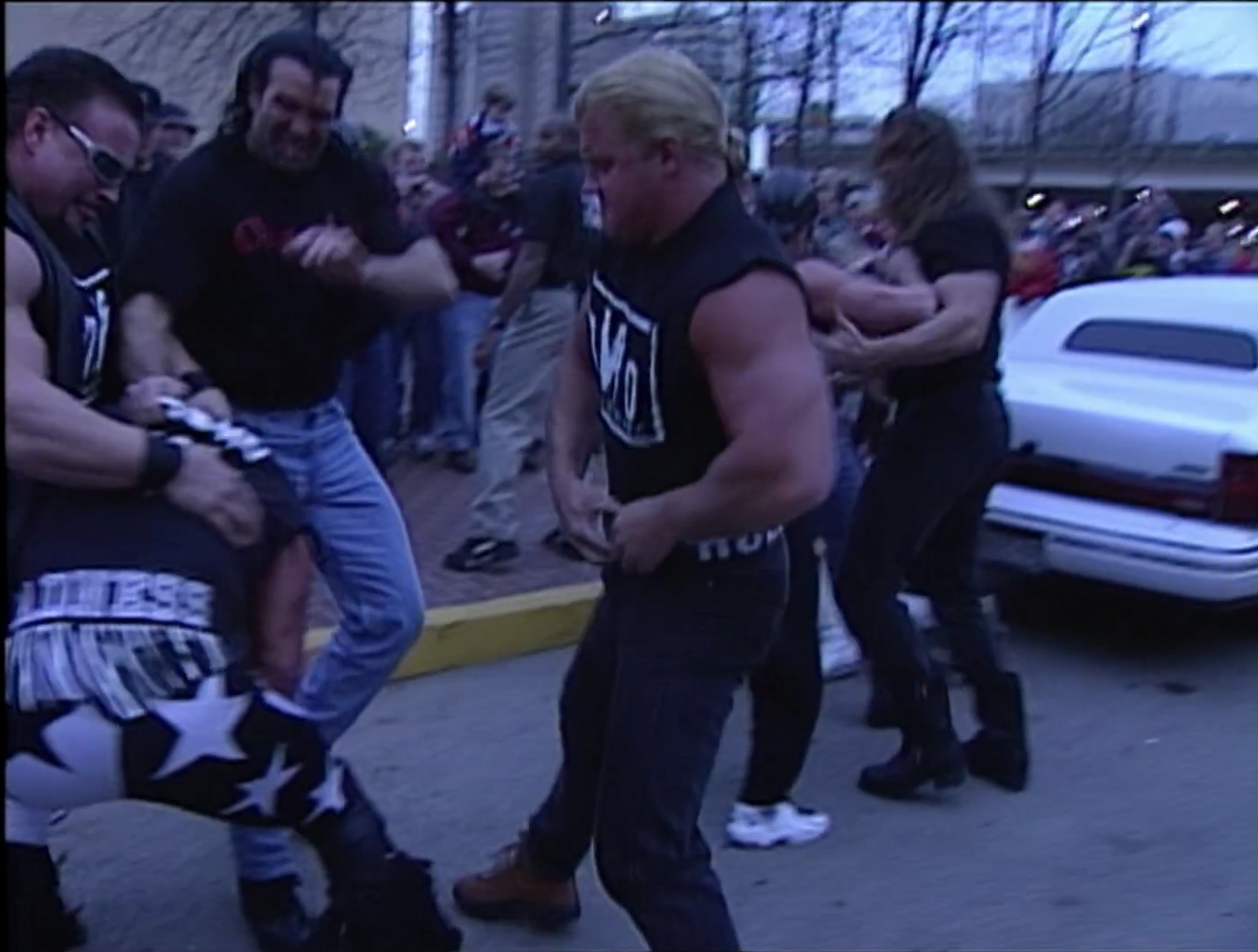 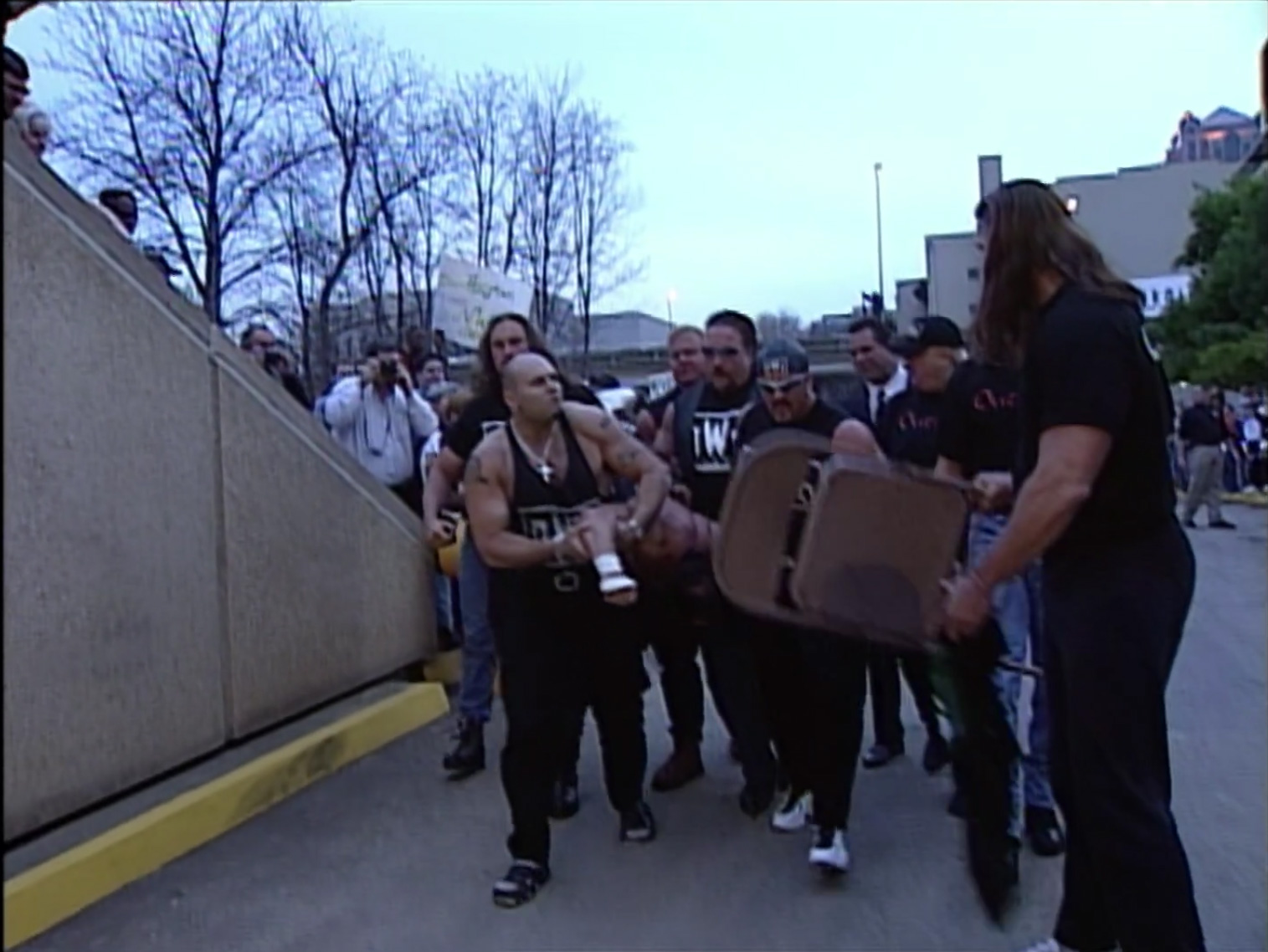 Summary: Showcase match for Goldberg. The Birmingham faithful ADORED this hoss. They came unglued for everything he did.

“Hollywood” Hogan and Eric Bischoff emerge and head to the ring. As they discuss Savage being taught a lesson about being “nWo 4 life,” Hogan cuts a promo on Sting. The Birmingham faithful inform Hogan that he indeed sucks.

Summary: Good match for Booker T as Riggs posed a solid challenge. Not sure why he didn’t unload a 110th Street slam since Marshall hyped it before the match.

Afterward, Saturn restrains Sick Boy and Hammer from attacking Booker T confident that he can beat him on Sunday without any help.

Back in the training room, Tenay tries to interview the injured Luger but gets rebuffed. 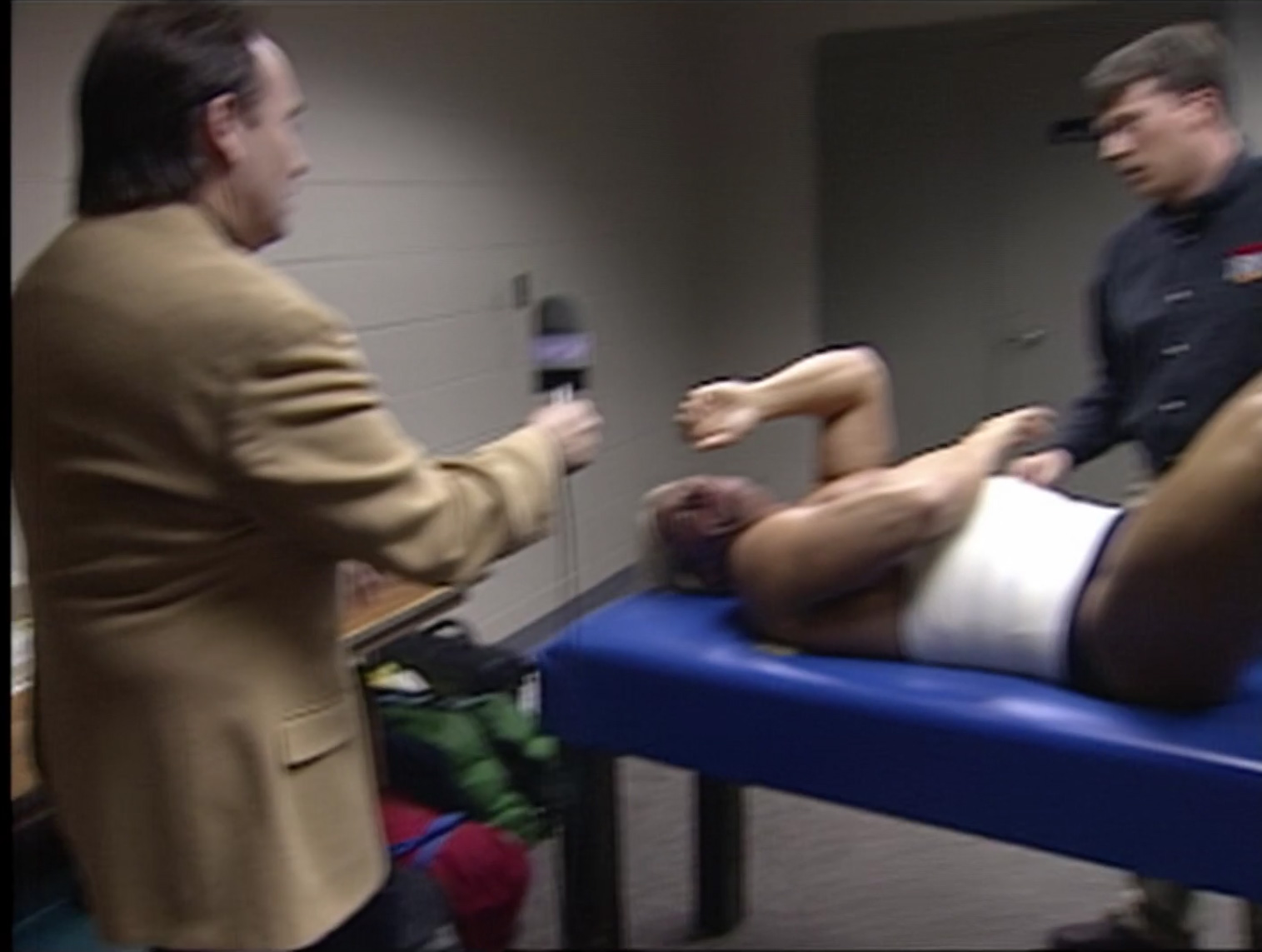 Summary: Fair tune-up match for Guerrera going into his title match on Sunday.

Speaking of which, Jericho storms the ring and attacks Guerrera. He places Guerrera atop the top turnbuckle and removes the mask! Wisely, Guerrera is wearing a second mask to fool Jericho. He then launches a missile dropkick before booting Jericho from the ring.

Prior to the next match, each Outsider comes to the ring wearing Syxx t-shirts. Hall performs his survey, yet Birmingham is WCW country, although the sheep still mimic “n-W-o.” Nash questions the whereabouts of Giant, invites him to the party on Sunday, and gives a shout-out to Syxx.

Match 5: The Outsiders (w/ the “American Nightmare” Dusty Rhodes) versus the Destruction Crew 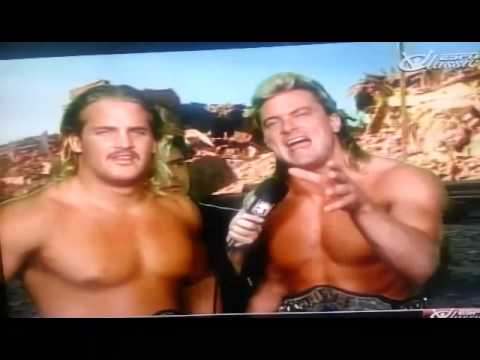 Summary: More shenanigans by the Outsiders than a match.

As Adams, Hennig, and Rude approach the ring, Rude cuts a promo on Bret on behalf of Hennig. During Hennig’s promo, Davey Boy Smith and Jim “The Anvil” Neidhart enter the ring to debate philosophies. When Hennig refers to Neidhart as “billy goat boy,” the fight is on. The bell rings to signify a match, and Smith supplies Hennig with an inverted atomic drop. He then catapults Hennig noggin-first into the post.

Adams dispatches Smith over the top rope to the floor at Rude’s feet. As Rude rams Smith into the steps, Smith provides Hennig with a ten-punch count-along. Rude strangles Neidhart on the floor with his tie, and Neidhart makes Adams HIT THE POLE. During the commercial break, WCW Security tries to break it up but fails miserably. This wasn’t so much of a match as a continuation of the nWo versus Bret.

At the entrance, Tenay interviews the Steiners without Ted DiBiase. Rick cuts the promo while Scott remains silent. Hmmm…

Next, we revisit the brawl that began the show.

Summary: Just your average La Parka-Calo match, but how will Disco get involved?

After the match, La Parka grabs his chair and WALLOPS Disco in the back with it. He then stands atop his chair celebrating.

Prior to the next match, Jericho quotes some Cheap Trick lyrics and cuts a promo on Guerrera.

Summary: Strong match between these two who knew each other’s repertoire very well. The ending sequence was quite spectacular.

NITRO RECAP #2: DDP promotes the upcoming match with Benoit’s assistance much to the chagrin of the Flock. 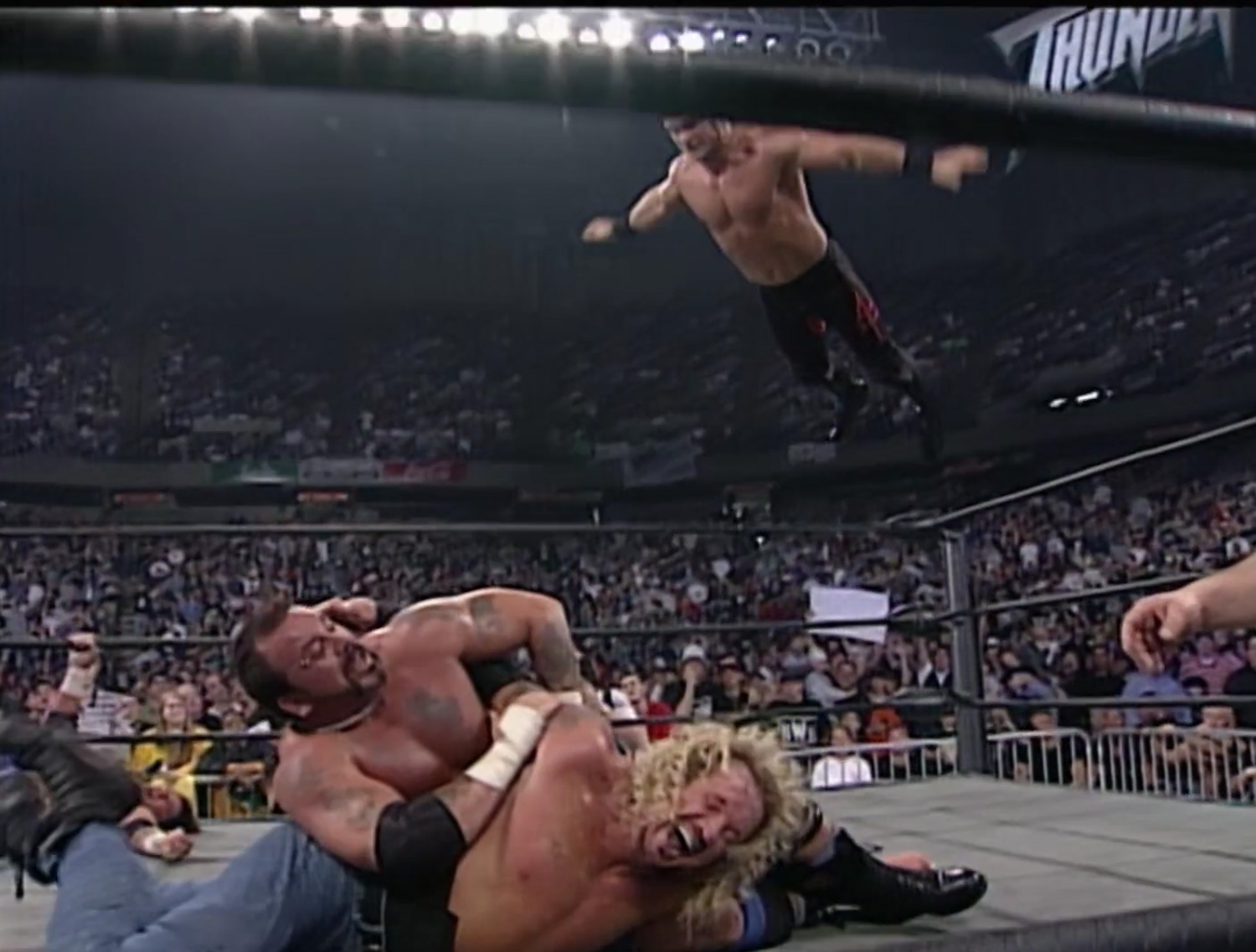 Summary: Action from bell to bell as these guys proved they are some of the hardest workers in the industry.

Main event angle disguised as a match: Hogan leads the nWo to the ring with the “carcass” of Savage in their arms. To make matters even more peculiar, Savage is wearing a Sting mask. According to Hogan, the match “is not going to go down.” He then proclaims to beat Sting at the PPV and calls him out. 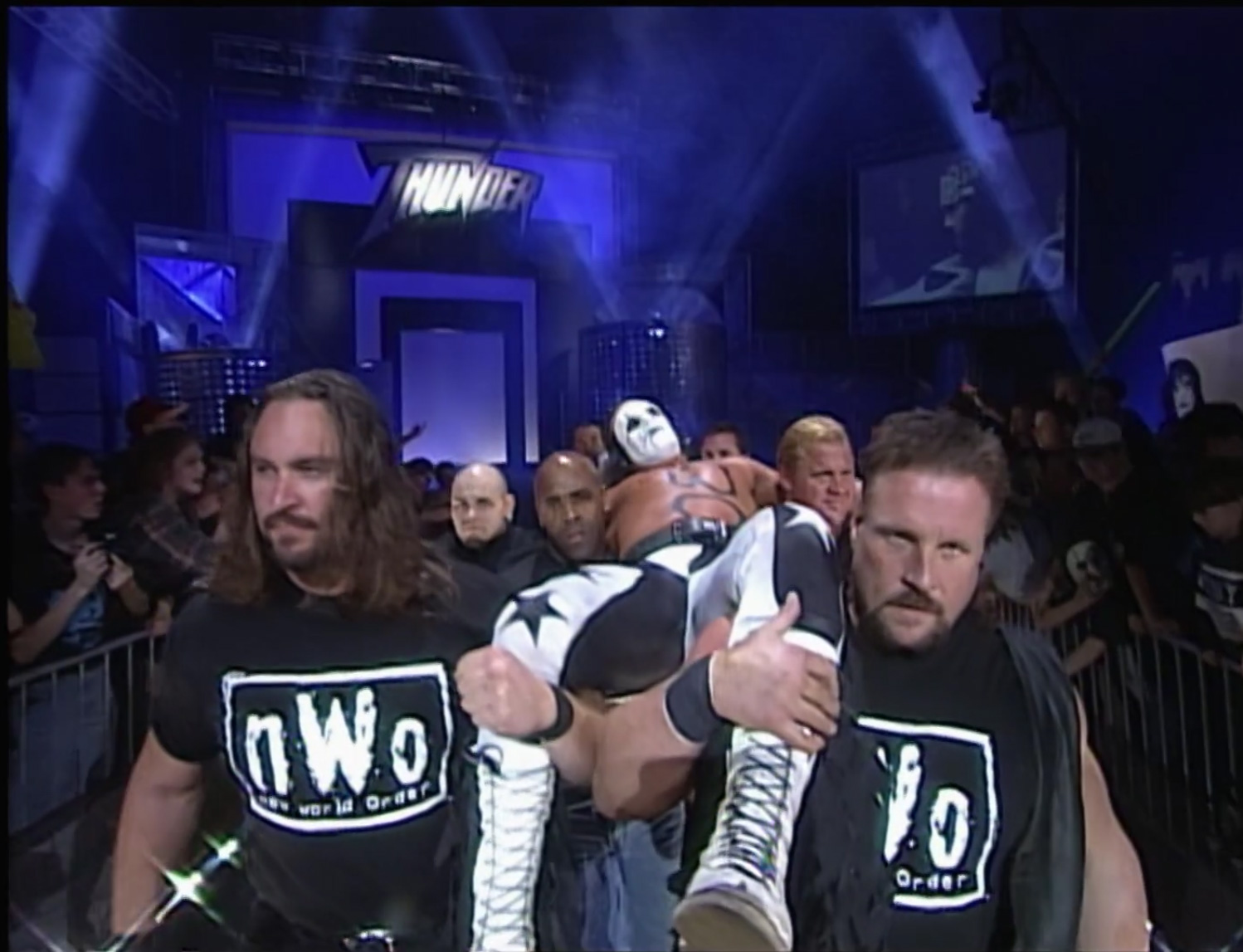 Sting sprints to the ring and beats up the nWo. When Sting turns his attention to him, Hogan flees the ring. As the numbers catch up to Sting, Hogan pummels him in the corner. Suddenly, the injured Luger hurries to the ring to save his friend. He and Sting clear the ring to end the show. 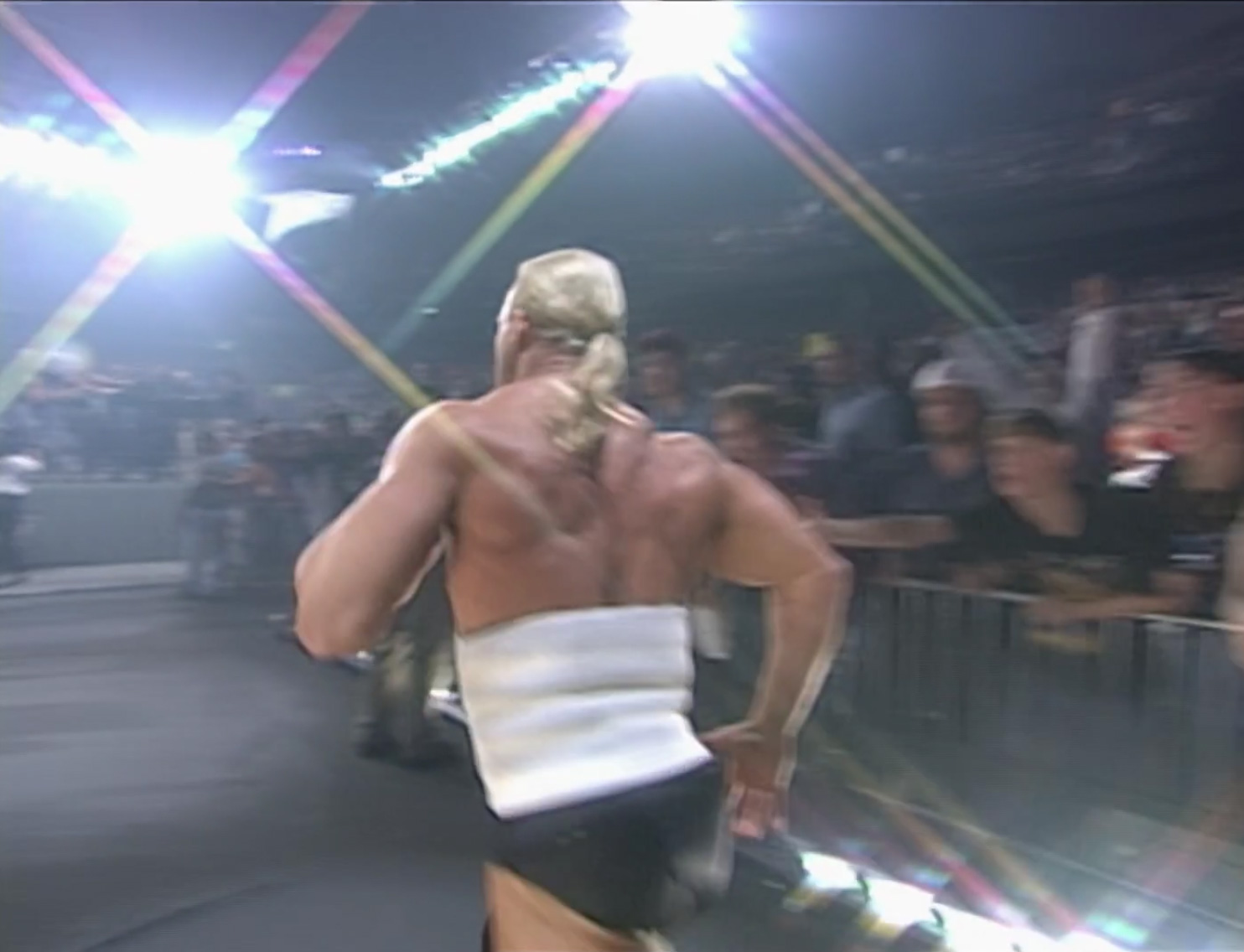 Conclusion: Well, the bait-and-switch was telegraphed at the beginning of the show. In fact, I’d bet that Savage didn’t even attend this show, and they costumed a similar wrestler to resemble him. Nonetheless, DDP/Benoit versus Raven/Saturn delivers in spades and is worth your time seeking out. Jericho also uses his heel persona to take underdog Guerrera and make him relevant. With Bret not available (wasn’t he hired to be on Thunder?), his brothers-in-law stand up for him against the nWo. Lastly, unlike Lord Steven Regal, Finley made Goldberg look awesome, and the Birmingham faithful were enthralled by their newest hero. Check this episode out as it’s a neat go-home show for the PPV.