Can Luger get the best of Flair? How will Hogan and Savage be involved? Can Glacier defeat Goldberg? What’s up with DDP? Will Spicolli grace us with his presence? Let’s find out!

“Hollywood” Hogan and Eric Bischoff come to the ring, and Hogan calls out Bret for his behavior at Starrcade ’97. As he turns his attention to Savage, Hogan requests his presence. Savage doesn’t disappoint and listens to Hogan’s ego. To bring “the family” together, Hogan and Savage will face Sting and Luger on Nitro.

When Hogan tells him to thank Bischoff, he also dresses Savage down. Savage, believe it or not, apologizes but also nails Hogan right between the eyes. Moronically, Bischoff puts his hands on Savage, so he gets BELTED. Hogan runs in with a chair, but Savage hightails it knowing he got the better of Hogan.

Interestingly, while the broadcast team hypes the upcoming PPV, a fan can be overheard yelling “Hogan sucks, motherfucker!” You gotta love live TV.

Scrubbed from the WWE Network would be WCW Motor Sports. Methinks the folks in Connecticut believe NASCAR is a compliment to one’s automobile. 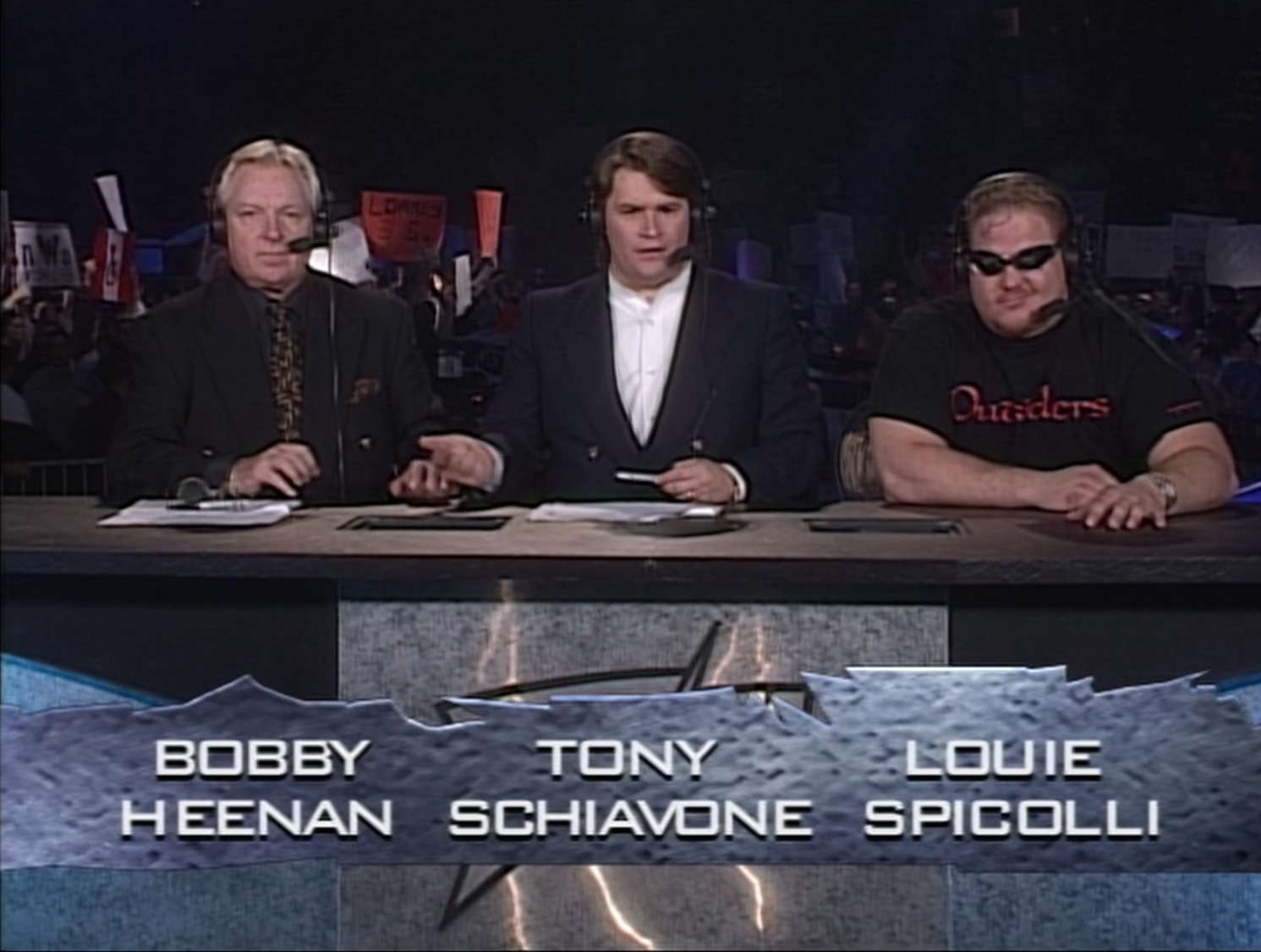 Summary: Plenty of high-flying and speed but not much else.

Immediately after Schiavone lauds the Steiners’ achieving gold on Nitro, he announces a rematch scheduled at the PPV. How fortuitous!

A video airs promoting the Scott Steiner character issues and the finish to the tag title match.

After the match, Meng won’t release the hold, so Barbarian sprints to the ring to tame his partner. Thinking that he succeeded, Barbarian eases Hart’s mind, turns around, and eats a Tongan death grip himself. Meng then chases Hart around the ring to end the segment.

The folks at WWE Network don’t want you to watch WCW Saturday Night. Why? Because they must be carnivores. How does that make sense? They don’t want to feed you any SQUASH!

Summary: Showcase match for DDP with one notable creative move by Mortis.

After the match, the Flock emerges while Mortis remains OUT COLD. Hammer then carries him backstage while Lodi discusses political Chinese leaders trash-talks him. As Hammer drops Mortis at Raven’s feet, Mortis pleads to join him. Instead, Raven PLANTS him with a DDT on the ramp.

We then revisit the saga between Mongo and Smith. In the meantime, I make popcorn.

The brawl continues, and Smith makes Mongo taste the steel railing. It must taste like the Angry Texan at the Mule.

Summary: Adams’ WCCW roots helped the Oklahoma City faithful root for him, but Bagwell took whatever advantage he could to gain victory.

Video featuring Juventud Guerrera airs with “Iron” Mike Tenay narrating. Speaking of Tenay, where are the interviews during this show?

After the match, Guerrera hits the ring, but Jericho gorilla-press-slams him. Jericho then unties Guerrera’s mask but eats a few kicks. To shoo Jericho away, Guerrera backdrops him over the top rope to the floor. 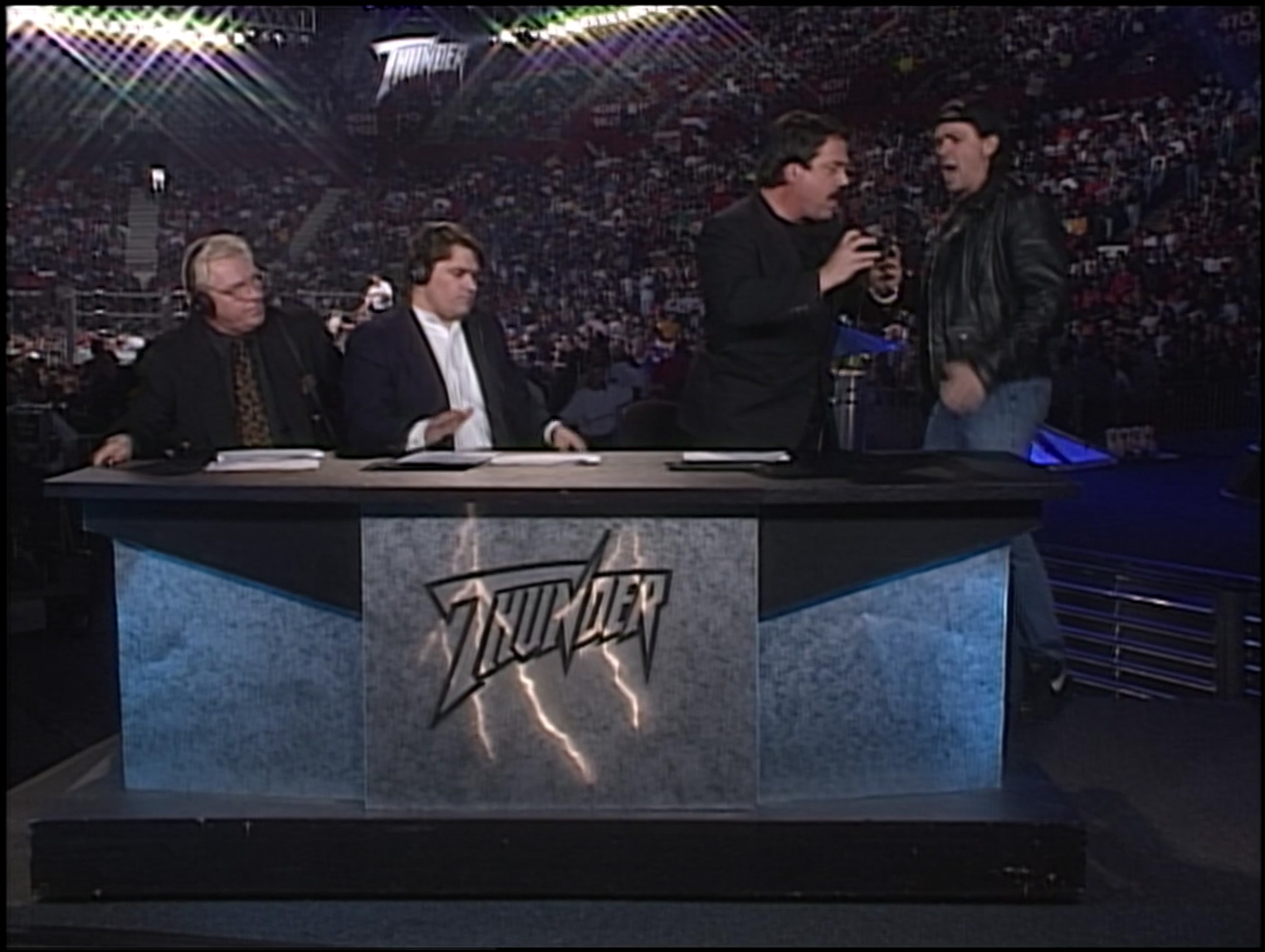 After the match, Mongo makes a beeline for the ring to continue fighting with Smith. WCW Security breaks them up, but the brawl couldn’t be contained prior to the break.

Before the next match, we revisit last week’s episode when the Flock disrupted DDP-Benoit.

Summary: The saga between Benoit and Raven continues. Do I sense a cage match so that the Flock cannot interfere?

After the match, the Flock pummels Benoit. Abruptly, through the Oklahoma City faithful, DDP storms the ring and disposes of the Flock. Simultaneously, Saturn applies the Rings of Saturn upon Benoit. When Saturn and DDP lock eyes, DDP ends up scattering him from the ring. Benoit yells at DDP about not needing his help, but DDP disagrees.

Summary: Showcase match for Goldberg. Methinks his matches have returned to their normal time length. For those curious, Goldberg remains undefeated. 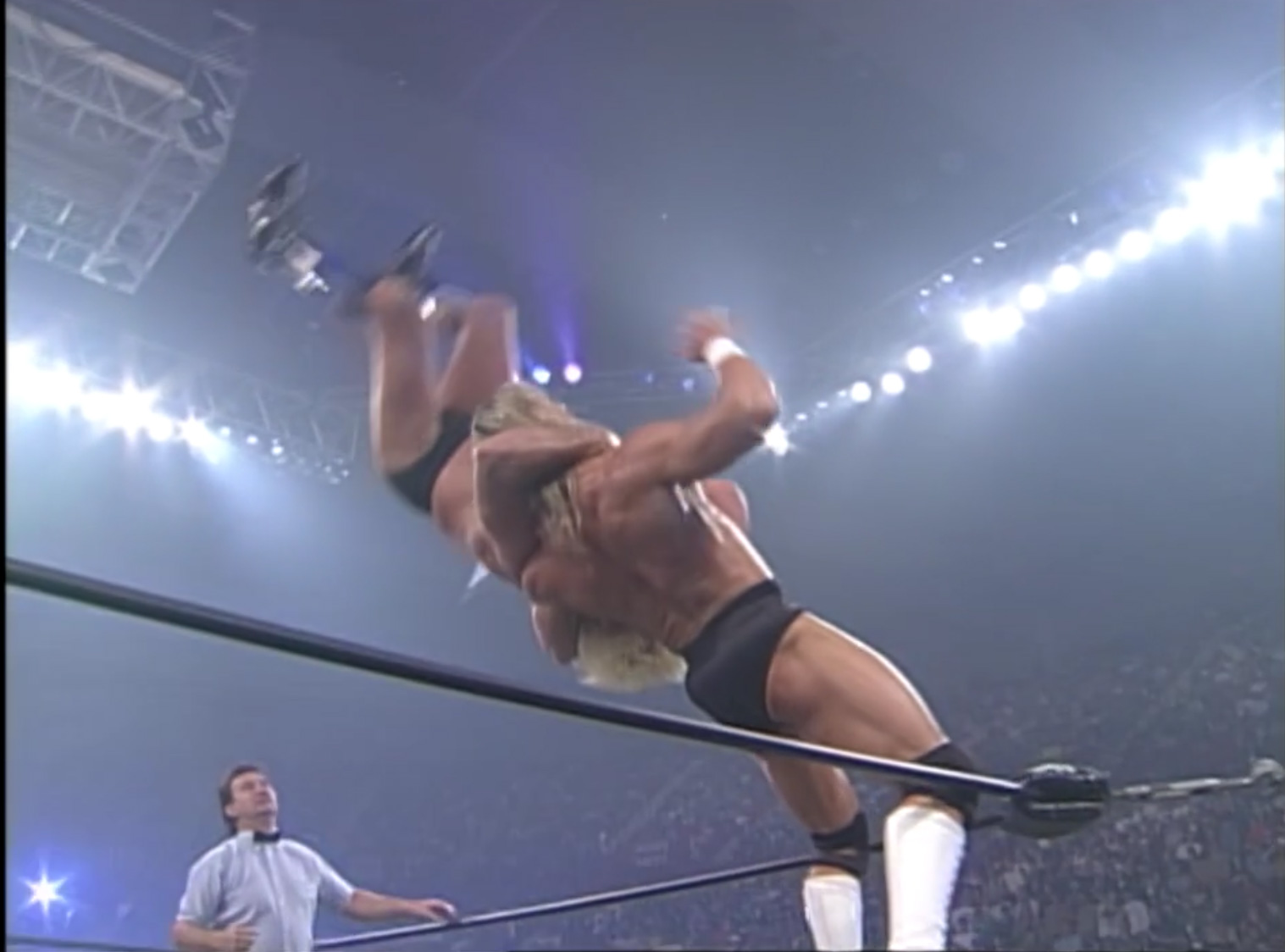 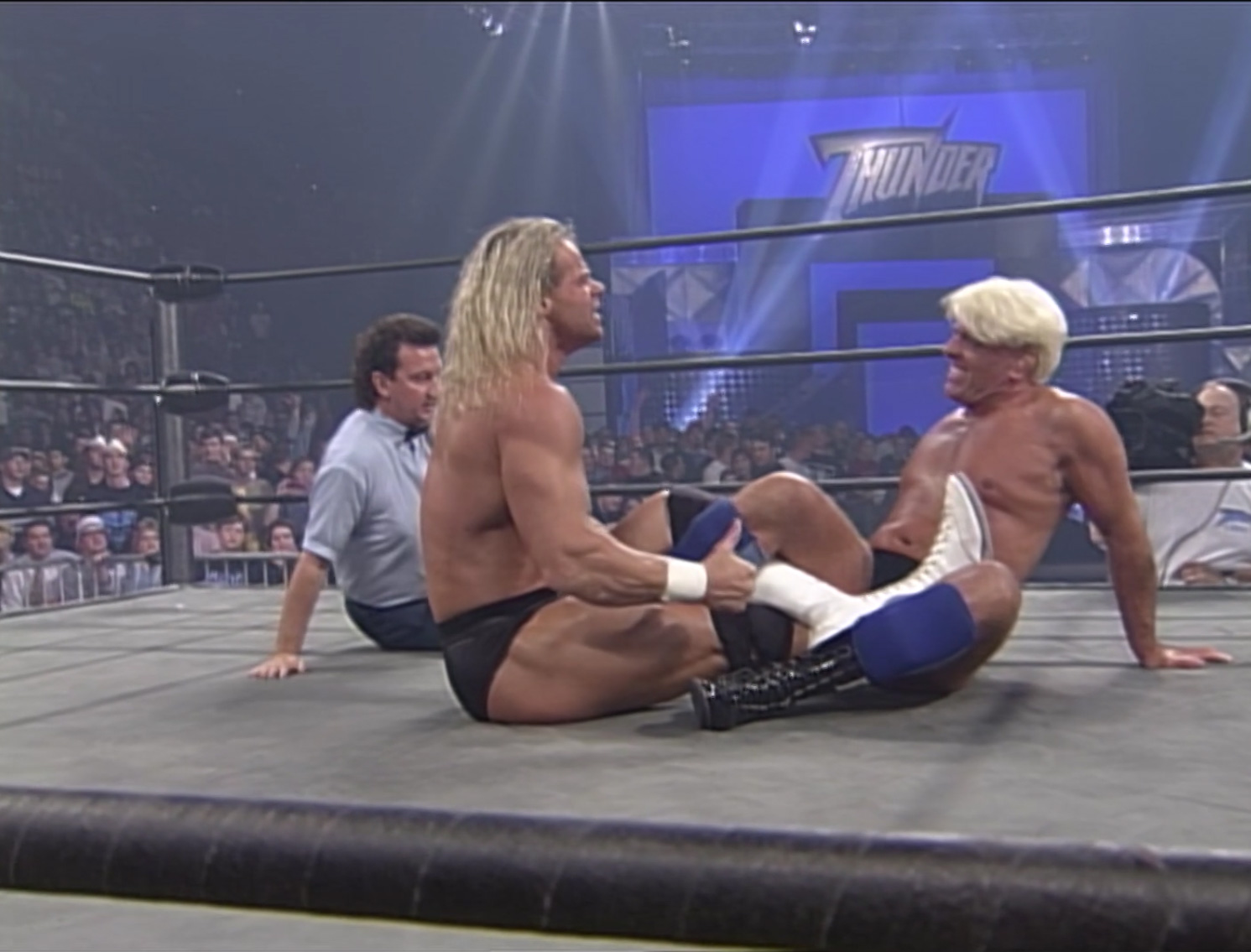 Afterward, Flair questions why Savage would attack Luger and gets hammered. Hogan enters the ring and clobbers Savage. Next, the nWo hits the ring while Hogan beats up Savage. Sting sprints to the ring to brawl with Hogan, and he and Luger provide their upcoming Nitro opponents with tastings of the steel railing to end the show. It must taste like the Rooster Cogburn at Toby Keith’s I Love This Bar. 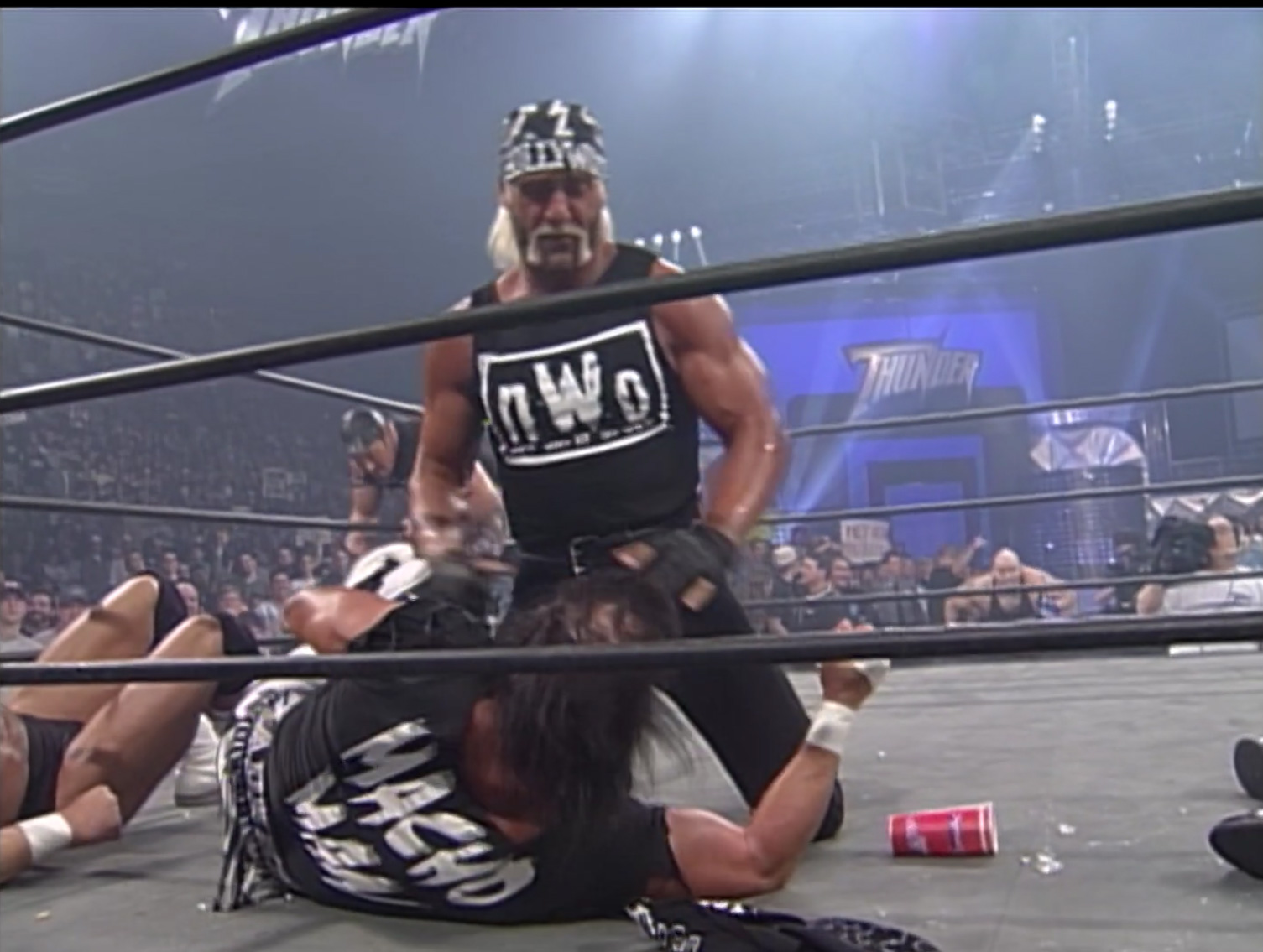 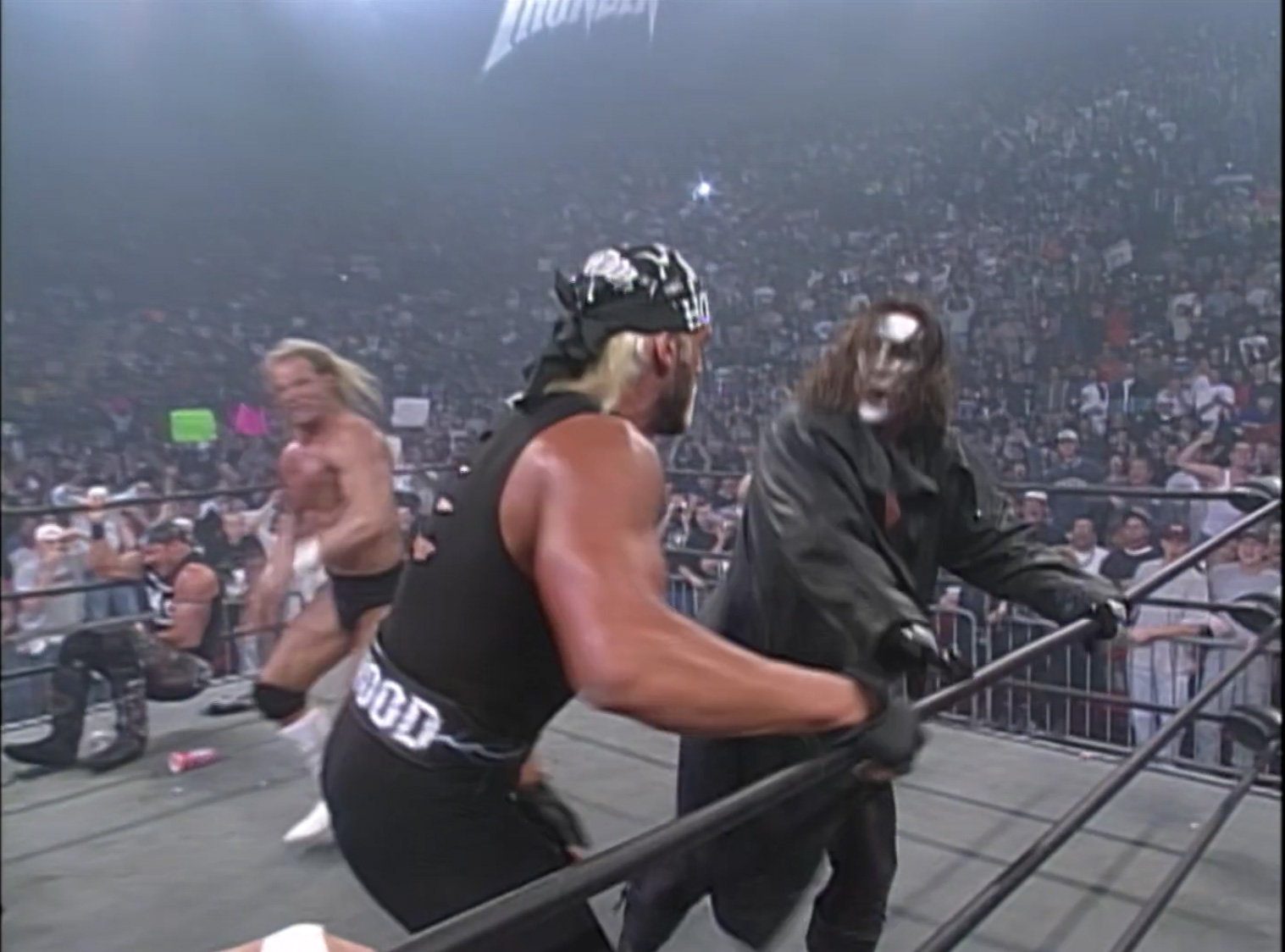 Conclusion: What PPV on Sunday? Why waste your money if Hogan and Savage square off with Sting and Luger for free on Monday night? Despite the lack of interviews, SuperBrawl VIII got some good hype while Smith and Vincent continue their Ben Affleck level of acting.

Stay tuned for WWF No Way Out!