Will Bret retain the WWF title or does Michaels (and others) have something else in store for him? Also, can Austin regain the IC title? Let’s find out!

Prior to the opening match, we revisit RAW is WAR from three weeks ago when Gunn WALLOPED Thrasher with the Headbangers’ own boombox. That’s some serious head-banging!

Summary: Sole purpose of this match was to elevate Jammes and Gunn over the current tag team crop. Hopefully soon, their team will get a name.

Match 2 (elimination): The Disciples of Apocalypse versus the Truth Commission 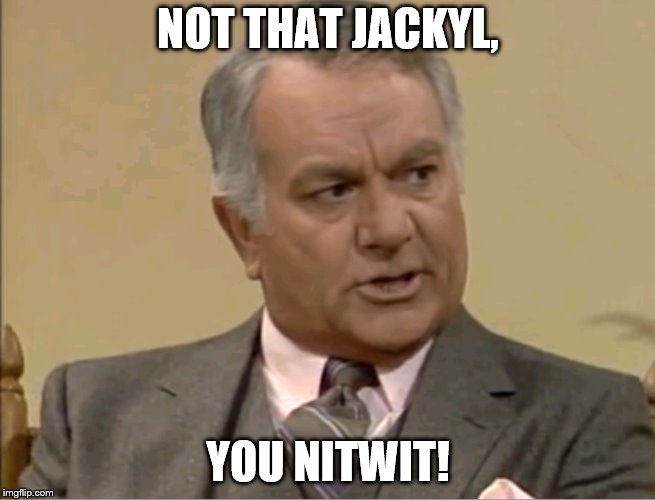 Summary: While the purpose of the match was to showcase the Interrogator, he needed to learn more than one move.

Prior to the show, members of the Montreal faithful were split on who will win the main event.

We then revisit last week’s episode of RAW is WAR when Blackman made his WWF debut.

Backstage, Michael Cole interviews Team USA with Goldust who has F-U painted on his face. Hmmm..I wonder in whose direction that’s pointed.

Ross then speaks to Jacqueline Cook of Columbia, SC who won the Survivor Series Super Supper Sweepstakes. Although she chooses to have dinner with Stone Cold Steve Austin, I hope she likes beer and hot dogs.

From the boiler room, Mankind compares Kane to a brick wall and threatens Paul Bearer. 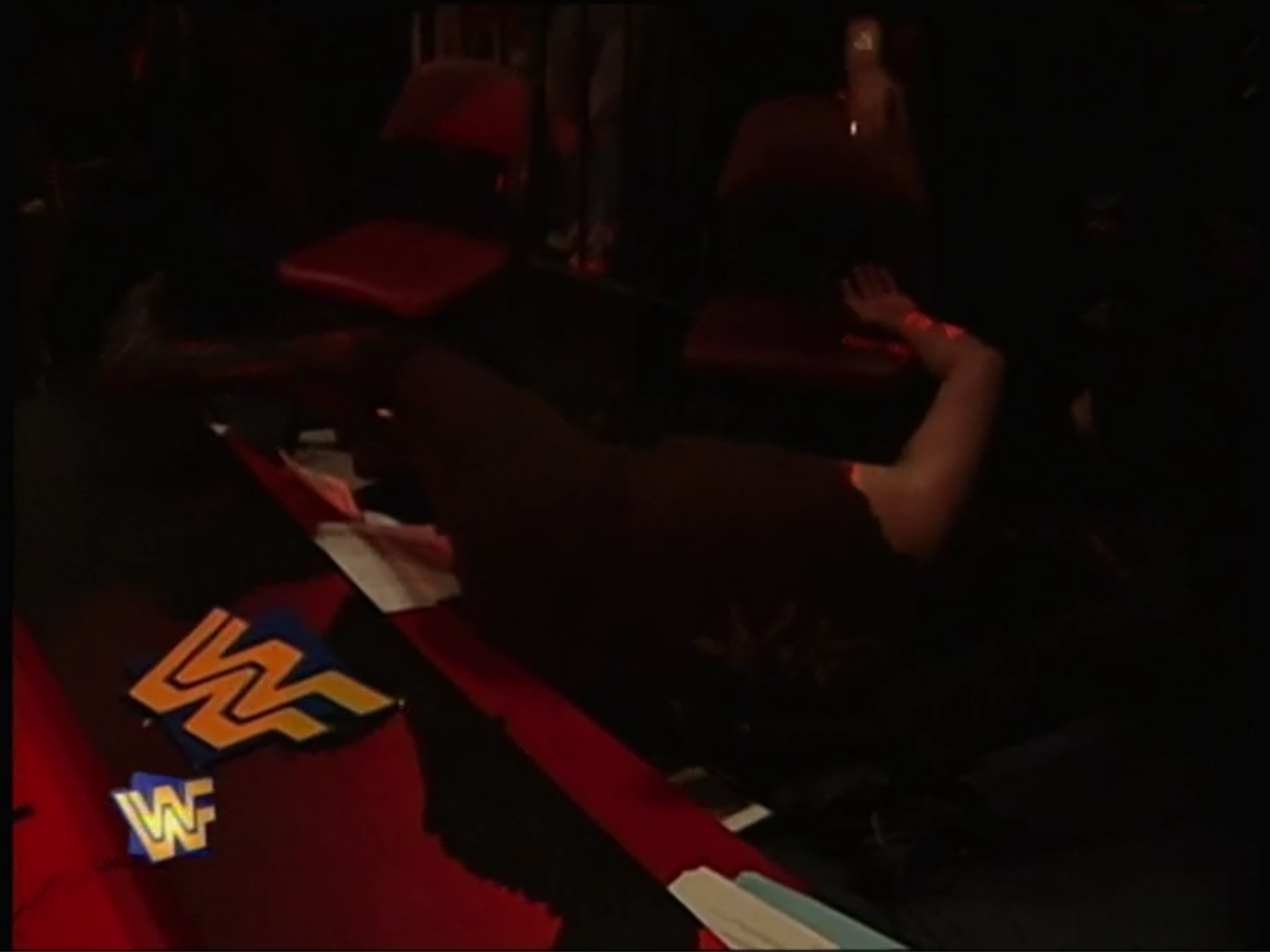 Summary: Although the brick wall won, Mankind did a fabulous job of trying to tear it down while making it seem almost invincible.

As the NoD makes its entrance, Dok Hendrix interviews Shamrock, the Road Warriors, and Johnson. 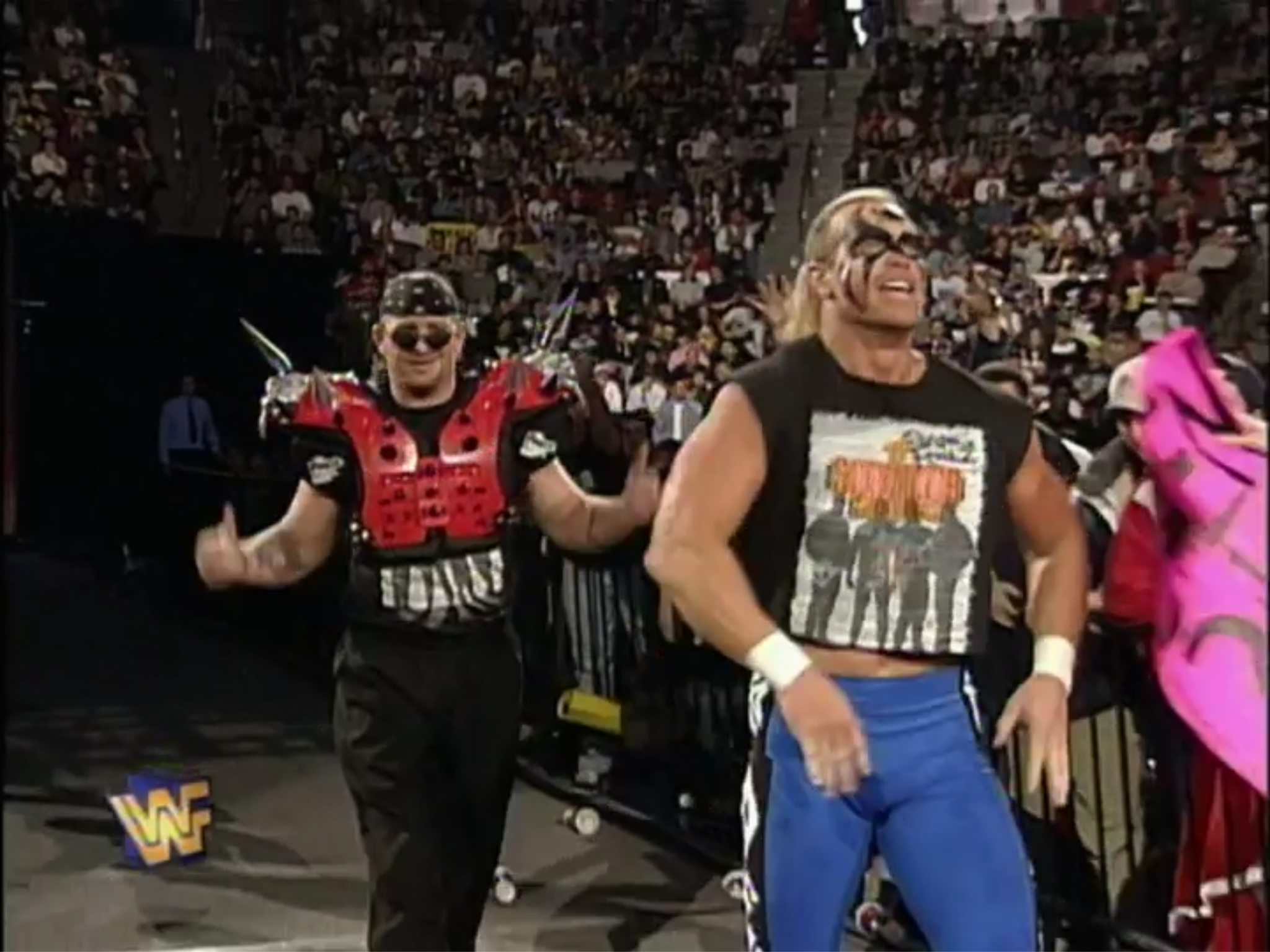 Summary: Obviously, the focus on the match was to build Shamrock, but it also showed that Maivia was ready to move beyond the preliminary matches.

Promo airs for D-Generation X which will be LIVE on PPV on 12/7. Its theme music would migrate to the faction soon afterward.

Video airs featuring Austin shooting an arrow through a picture of Owen. During the video, we revisit the piledriver that caused a stinger to Austin. 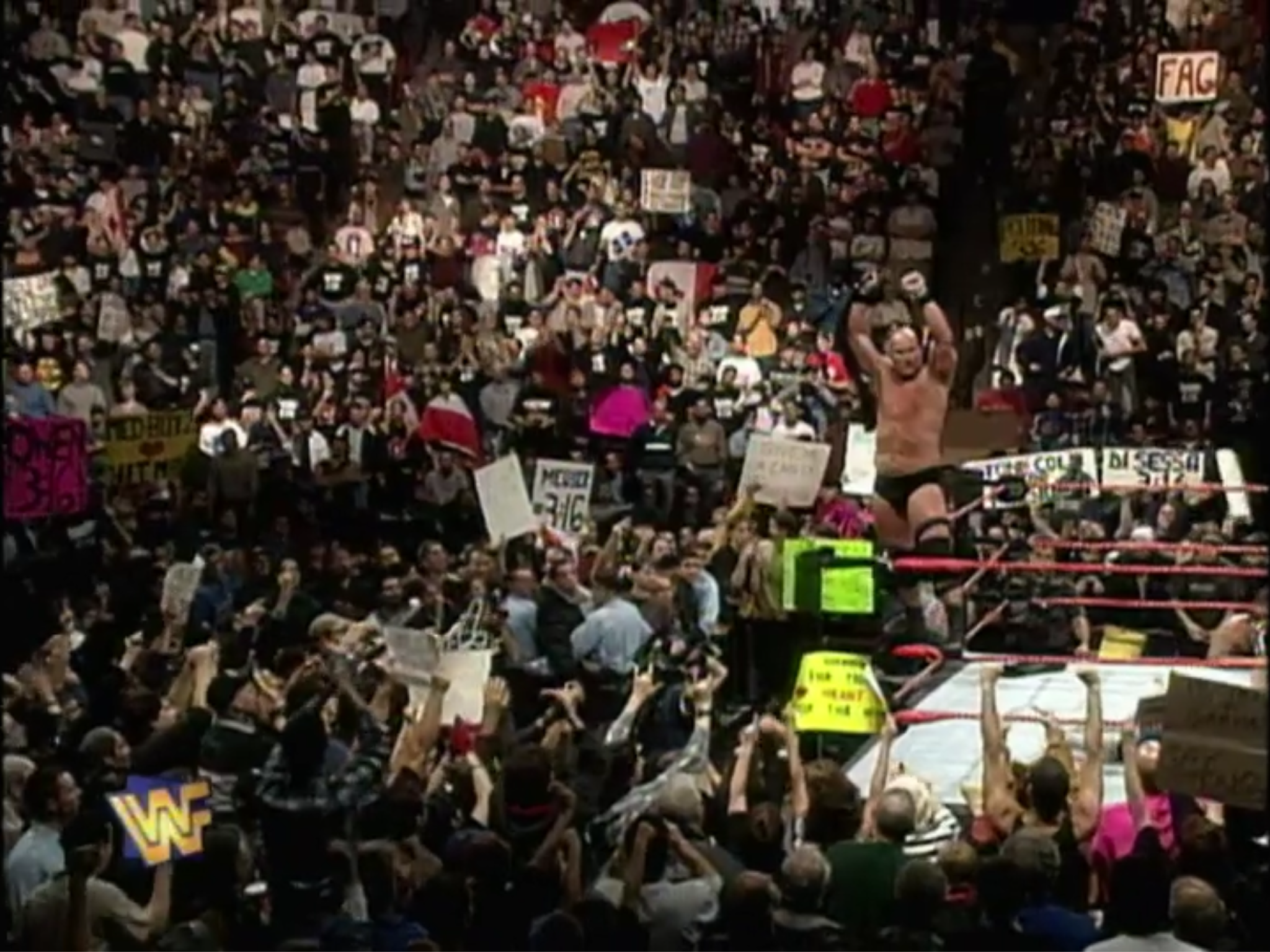 Summary: Why was the match so short? Well, along with Austin’s bad neck preventing him from competing at a high level, Owen still had post-concussion symptoms stemming from his match with Johnson.

Before Austin can celebrate, Team Canada returns only to receive its own set of Stunners. 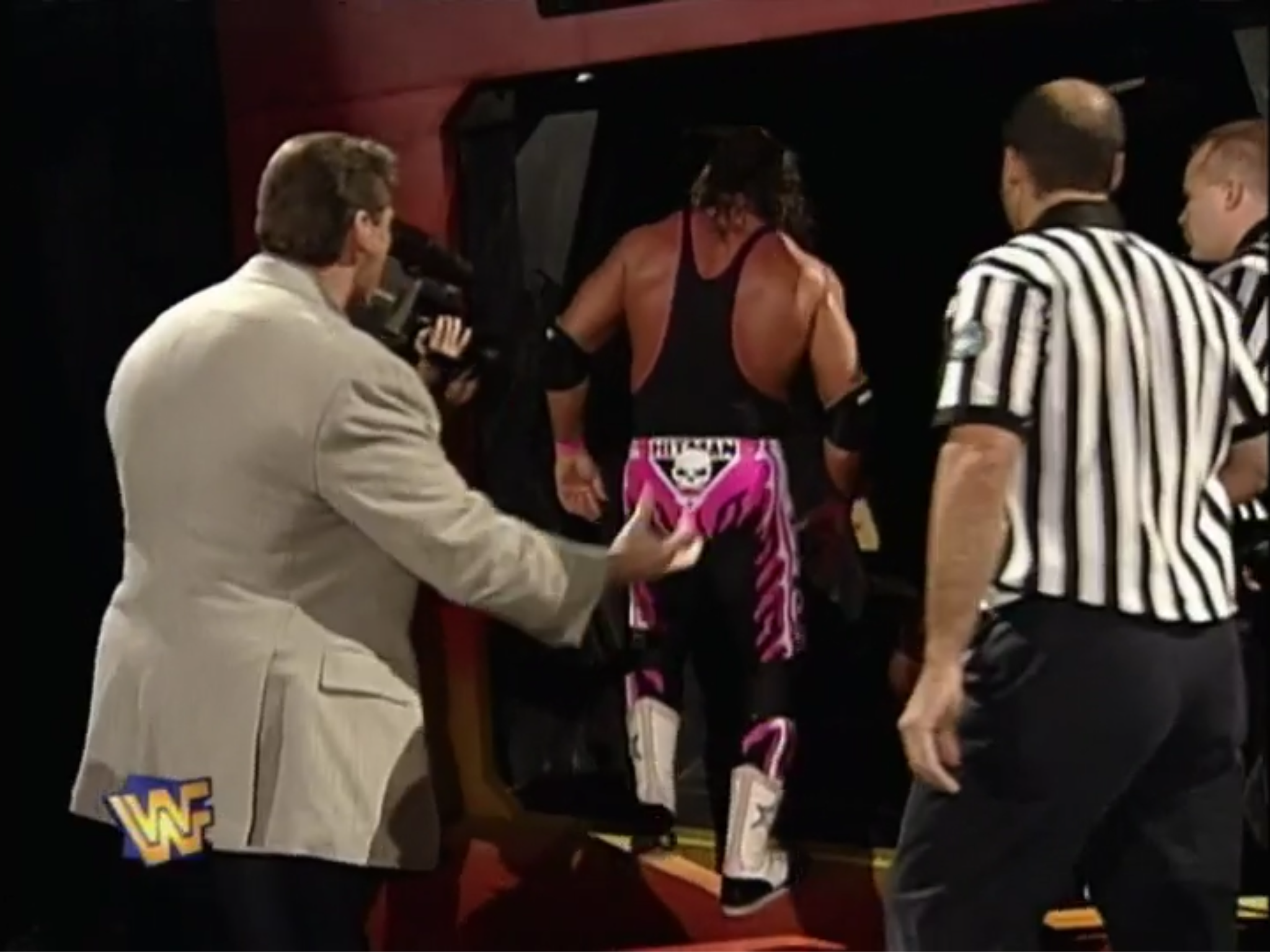 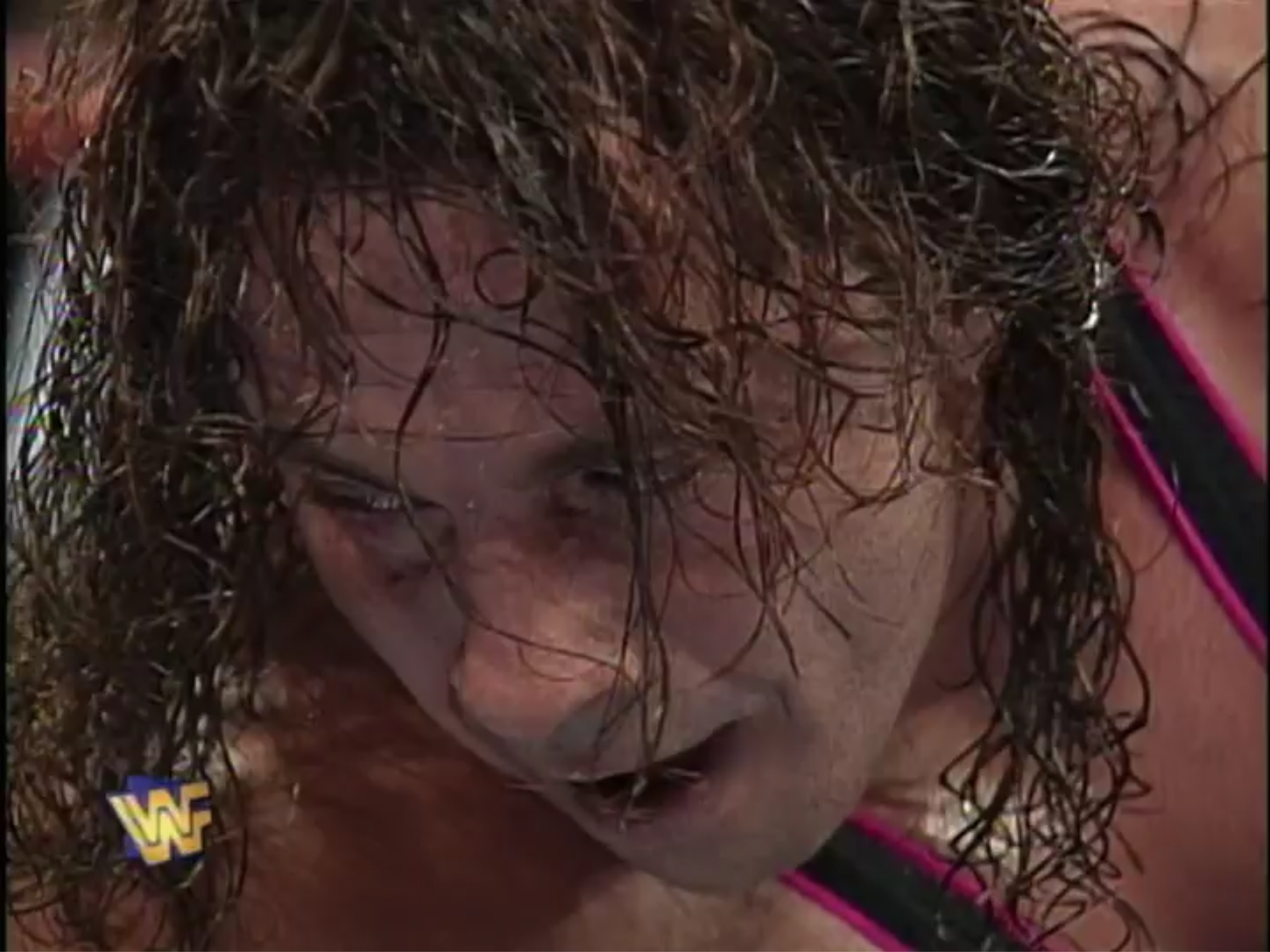 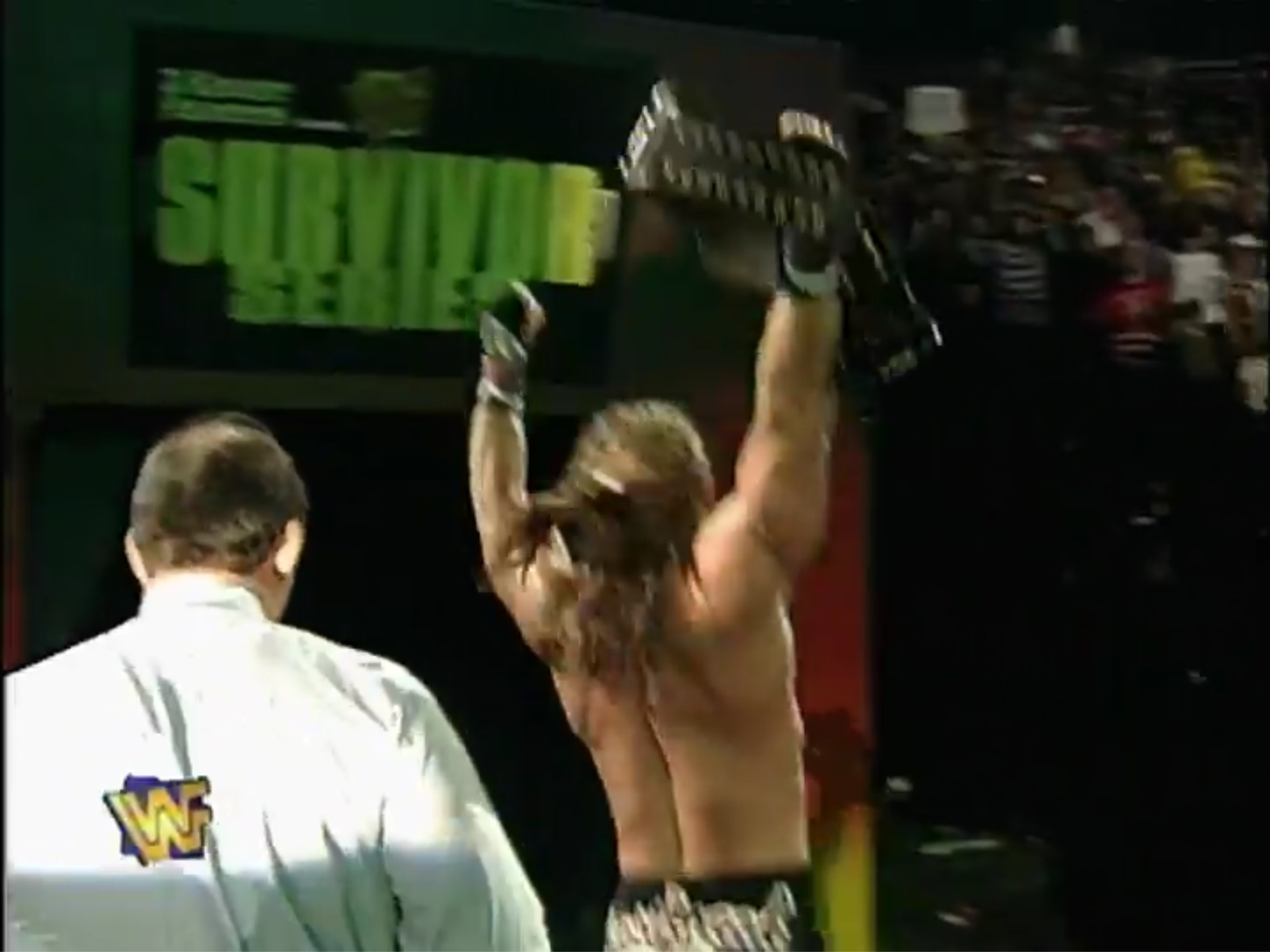 Summary: Allow me to break this down into two categories:

WHAT LED TO THIS SITUATION: According to different sources, on 10/21, Vince asked Bret to drop the title to Michaels at this PPV. Bret mentioned to Vince that Michaels had disrespected him the night before regarding putting each other over for the title. The tension caused Bret to think twice about putting over Michaels going forward including the PPV.

In addition, Vince cried poor and asked Bret to go to WCW. In reality, Vince had spoken to an investment firm about turning the WWF public, and they suggested getting unnecessary long-term assets off the books (e.g. Bret’s contract).

On one hand, WCW allegedly was going to announce on Nitro that Bret Hart had signed a contract. On the other hand, Vince, thanks to the Madusa incident in December of ‘95, needed to get the title off Bret before that happened.

WHAT SHOULD HAVE HAPPENED: With a house show in Detroit on 11/8, the WWF flies Michaels in to beat Bret for the title due to inadvertent interference by the Hart Foundation. Additionally, have the Undertaker involved but not physically involved. Lest we forget, bring the WWF cameras to capture the whole thing.

For the PPV, the WWF still promotes a Michaels versus Bret match. To maintain the “anything can happen” mantra, the footage from Detroit airs at the beginning of the show with a NEW stipulation for the PPV main event. In this case, Bret distances himself from the Hart Foundation and loses a loser-leaves-town match by way of interference from a not-so-inadvertent chair shot by Undertaker. Prior to the pin fall, Undertaker looks directly into the camera and proclaims: “That’s payback, BITCH!”

After D-Generation X celebrates while leaving, Bret regains consciousness. To close the show, Bret offers his gratitude to his Canadian fans, promises his wrestling days aren’t over, and will continue being their hero if they want him to be.

I realize that’s two consecutive jobs (albeit neither is clean) to Michaels, but Bret MUST do what was right for business. Despite Michaels’ disrespect and Vince’s shadiness about company finances, Bret needs to be the better man. Ultimately, allowing him to bow out in Canada would maintain his heat there while giving the WWF a proper send-off.

Meanwhile back at the PPV, Hebner immediately hightails it backstage as Michaels’ music plays. Bret gets to his feet, takes one look at Vince, and SPITS IN HIS FACE. While HHH leads a purportedly angry new WWF champion backstage, the show abruptly leaves the air. 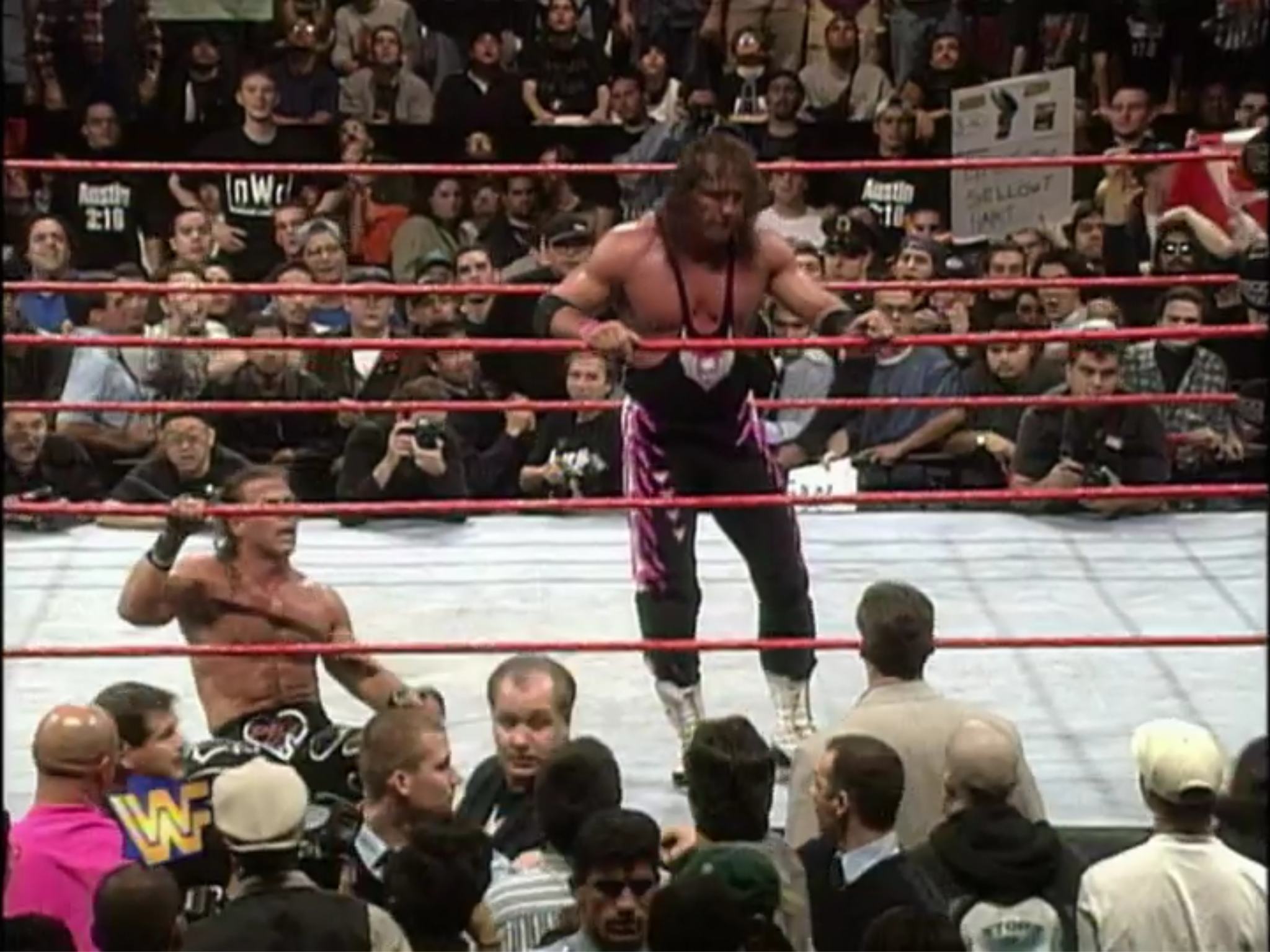 After the show, Bret not only tosses down the already-destroyed monitors from the Mankind explosion but also pantomimes “W-C-W" in the air to inform his Canadian brethren where to find him going forward. Backstage, he legitimately punches Vince in the face, yet Vince entirely expects it since he knows that he had screwed Bret over.

Conclusion: I would love to say that this show had nothing meaningful to it, yet I cannot. The ending of the main event became known as the “Montreal Screwjob.” While I won’t spoil future results, the effects of the screwjob in the wrestling world equate to the after-effects of a volatile earthquake. Expect the big nWo announcement on Nitro, but I’ll also have fallout from the screwjob within my RAW is WAR reflection.