Live from Indianapolis, IN

Who’s the latest acquisition for the Wolfpack? Can Booker T retain the TV title against Finlay? Who gets punted from the Flock? And what, pray tell, is Jericho up to now? Let’s kickstart this episode to find out!

In case you’re wondering, this episode aired from 7-9PM ET due to the NBA playoffs.

In the meantime, Zbyszko took his kudos from the Indy faithful.

We revisit last week when the nWo split in half with Nash, Savage, and Konnan creating the Wolfpack. 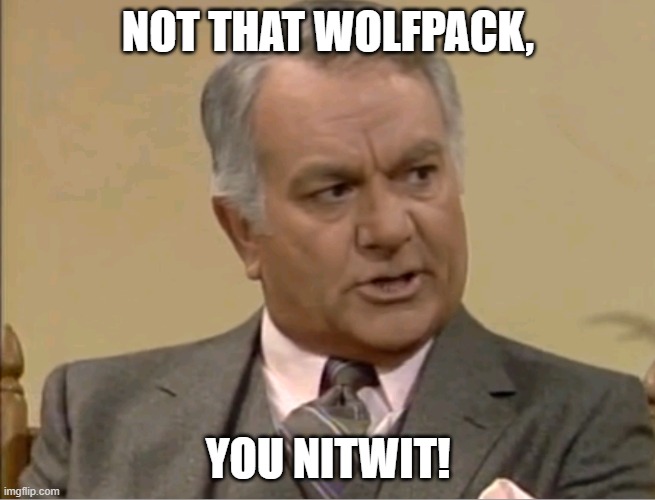 Sorry, Chester, but who doesn’t love NC State? Especially after their Holiday Bowl opponent quit before warm-ups. Even Alabama can’t say that!

Prior to the opening match, Eddie grabs the microphone much to the dismay of the Indy faithful. He calls out Norton, and the match is ON.

Summary: Showcase match for Norton after Eddie cleverly extricated himself.

After the match, Ultimo Dragon checks on Chavo in the ring much to Eddie’s objection.

Summary: Mere backdrop for the Wolfpack.

Nash jackknife-powerbombs Putski and grabs a microphone. While he refers to his clique as the Wolfpack, Nash namedrops Scott Hall. According to Hogan and Bischoff, Hall is “too dangerous to have on live TV.” He touts the red-and-black look for the Wolfpack and calls out Hogan. As Savage cuts a promo on Bret, Nash introduces another defection from Hogan’s crew—Curt Hennig.

At the entrance, Brian Adams gets in Hennig’s face, but Hennig yells at him that he “knows what (he’s) doing.” When Nash calls Adams “Hogan’s stooge,” Hennig removes his black-and-white shirt to reveal the red-and-black one. Konnan takes the microphone and challenges Adams to a match TONIGHT. Next, Nash calls out Sting yet challenges Luger.

We revisit last week when Jericho interviewed a poster of Dean Malenko.

In the ring, the Nitro Girls dance in pink. After their number, Alex Wright jumps into the ring to do his thing, but WCW Security chases him away from the ring.

Summary: Say it with me—Garbage match.

At the entrance, “Mean” Gene Okerlund interviews Adams who claims to be one of Hogan’s “enforcers.” He also runs down the Wolfpack and accepts Konnan’s challenge.

Video featuring Booker T and Chris Benoit airs. They will have a rematch at the PPV. Interestingly, to boost house show business, Benoit defeated Booker T for the TV title on 4/30 in Augusta, GA. The next night (5/1) in Greenville, SC, Booker T regained the title from Benoit. At the next show (5/2) in North Charleston, SC, Benoit won the title again, but last night (5/3) in Savannah, GA, Booker T regained the title.

We revisit last week when Bret accepted Savage’s challenge for the PPV. Next, he and Hogan had a chat until Savage interrupted.

Prior to the next match, Kidman provides its stipulation, details there will be no interference, and shows favoritism toward Saturn. HA!

Summary: Solid workrate and high-flying from both wrestlers. Despite the lack of appeal to the crowd, the outcome was unexpected, and the Flock storyline involving an interloper continued.

Backstage, Raven tries to exit the locker room, but DDP clocks him with a STOP sign. DDP, wearing a bull rope, destroys the Flock with the sign and rams Horace face-first into a locker. As DDP finds him in the hallway, he whips Raven into a garage door. He drags Raven through the entrance, clotheslines him, and pulls him into the ring. While the Indy faithful chanted “D-D-P,” a desperate Raven nailed their hero with the great equalizer. Poor Kimberly. Raven attempted an Even Flow, but DDP backed him into the corner. When DDP hanged him over the top rope with the bull rope, WCW Security broke it up.

At the entrance, the Nitro Girls dance in neon while Schiavone shills the Nitro Party contest.

We revisit last week when Reese destroyed Guerrera with a modified chokeslam.

Sidenote: Although the ring was cleared of debris, it’s still quite wet. Let’s hope no one gets injured.

Summary: The F5 was the sole highlight of the match, yet the wet ring spot remained the lowlight.

After the match, heel miscommunication saves Guerrera’s bacon until Reese chokeslams Guerrera. Suddenly, Goldberg storms the ring, leaps over the top rope, and spears Sick Boy. He jackhammers the titanic Reese, and the Indy faithful roars its approval.

At the entrance, Okerlund interviews Rick Steiner who calls out his brother. He wants to finish things “once and for all.” As Big Poppa Pump emerges on crutches, Rick calls BULLSHIT. BPP shows contrition and mentions the injured Buff Bagwell. When an impatient Rick calls him on the carpet, BPP wants “to be a Steiner brother again.” BPP gets emotional, yet Rick won’t trust him.

While BPP limps away, Rick gives him “another chance,” and they embrace. That proves costly as Adams runs in and blasts Rick from behind. With BPP proving he didn’t need crutches, Adams delivers a shoulder breaker to Rick. Under BPP’s direction, Adams smacks Rick’s injured shoulder with a baseball bat. Rick’s shoulder injury was legitimate, and he wouldn’t return for a few months.

Summary: More storyline than match as the battle between Hogan’s and Nash’s crews rage forward.

Afterward, Nash jackknife-powerbombs Adams and assists Konnan to the delight of the Indy faithful.

At the entrance, Nitro Girls dance in blue and silver, and Schiavone announces that Jim Cane from Petal, MS is the Nitro Party pack winner this week. His video airs.

Summary: Upset city! I mentioned earlier that Benoit and Booker T have been trading the title back and forth, but this result came out of nowhere.

Summary: A demonstration of the red-and-black attack upon Luger.

Afterward, Nash attempts a jackknife powerbomb to Luger, but Sting interrupts with the Giant in tow. A brawl ensues, and Bret stops Adams in the aisle. Smartly, Bret tells him to let them beat each other up because they’ll be easy-pickin’s later.

Conclusion: The nWo Wolfpack is born, and they’re recruiting. They nab Hennig, so anything’s possible. Also, Finlay disrupts the Booker T-Benoit saga by stealing the TV title. Saturn gets booted from the Flock, yet Raven receives the worst from it. As BPP pulls a fast one on his brother, Jericho’s mockery of Malenko continues. This is a much better effort than last week and scores a decent rating. Check it out!