Who’s ready for Spring Break? WCW is! It’s year two at Club La Vela, so what kind of party will WCW offer us?

PROLOGUE: As many of my longtime readers know, I normally publish the Monday Night War shows on the same day. Since RAW will be pre-empted by Moby Dick and air the following night, I will publish them separately for YOUR pleasure.

from Whale GIFs via Gfycat

Wait a minute! Nitro is unopposed? Smell the ratings!

While the Spring Breakers chant for Zbyszko, stills from last night’s main event are shown.

Hollywood Hogan leads the entire nWo (minus Savage) to the ring, and Nash, clad in a Hawaiian shirt, looks like he’s had a few. As Hogan sings Nash’s praises, he cuts a promo on Savage who’s “back in the fold.” To celebrate, Hogan will team with Savage against Sting and Luger. Wow! What a blockbuster main event!

To mock Sting, Bischoff acknowledges that since the show is at an outdoor venue, there are no rafters from which Sting can rappel.

On a side stage, the Nitro Girls dance in yellow and black with St. Patrick’s Day hats. Since they’re not sitting in his lap this week, Schiavone’s all business shilling the Nitro Party contest.

After the match, the Flock attacks Goldberg one-by-one but fails just as quickly. While Kidman gets folded up like an accordion, Sick Boy swallows his Cinnaburst during a spear.

Nitro is sponsored by Valvoline. That’s not gum!

At the entrance, “Mean” Gene Okerlund shills the hotline and mentions a big retirement in pro wrestling. All roads point to Rick Martel, but I can neither confirm nor deny it at this time.

Summary: Showcase match for Dragon although this was quite a styles clash.

Nitro Girls dance in the ring wearing the same outfits. B. Brian Blair would be so proud.

Summary: Showcase match for Norton, but that superkick could have shocked the world.

After the match, Bagwell disposes of Adams from the ring, and Norton spits into the camera.

Footage from the 1998 Spring Break Miss Monday Nitro contest was shown. All I can say is…bikinis, gentlemen.

Summary: Showcase match for Smith and Neidhart while Enos and Bloom refuse to be slouches.

Nitro Girls remove their t-shirts to reveal bikini tops and dance in the aisle.

Bischoff leads Savage and Elizabeth to the ring. While the Spring Breakers chant his name, Savage shoves Bischoff and clarifies his actions from last night as for himself. Savage vows to beat Sting at the PPV, take over the leadership of the nWo, and send Hogan to the “bottom of the pecking order.” Bischoff is bewildered.

Prior to the next match, Raven cuts a promo on Benoit, yet the Spring Breakers believe that he “sucks.” As he informs Benoit that their feud must end, Raven turns his attention to DDP who “deserted” him. He then subtly mentions Jake “The Snake” Roberts who mentored both of them.

Match 5: The “Crippler” Chris Benoit versus Raven (w/ the Flock)

Summary: Solid match with a fatal flaw costing Benoit the victory. According to Schiavone, Raven becomes the #1 contender to the US title.

The Nitro Girls party among the Spring Breakers. Instead of drinking from beer bongs, they spray silly string.

Summary: Although this wasn’t Spring Break material, it was a good high spot by Miller.

Nitro Girls return to the side stage to dance in neon colors. They’ll be ready in case the Spring Breakers want to play in traffic. 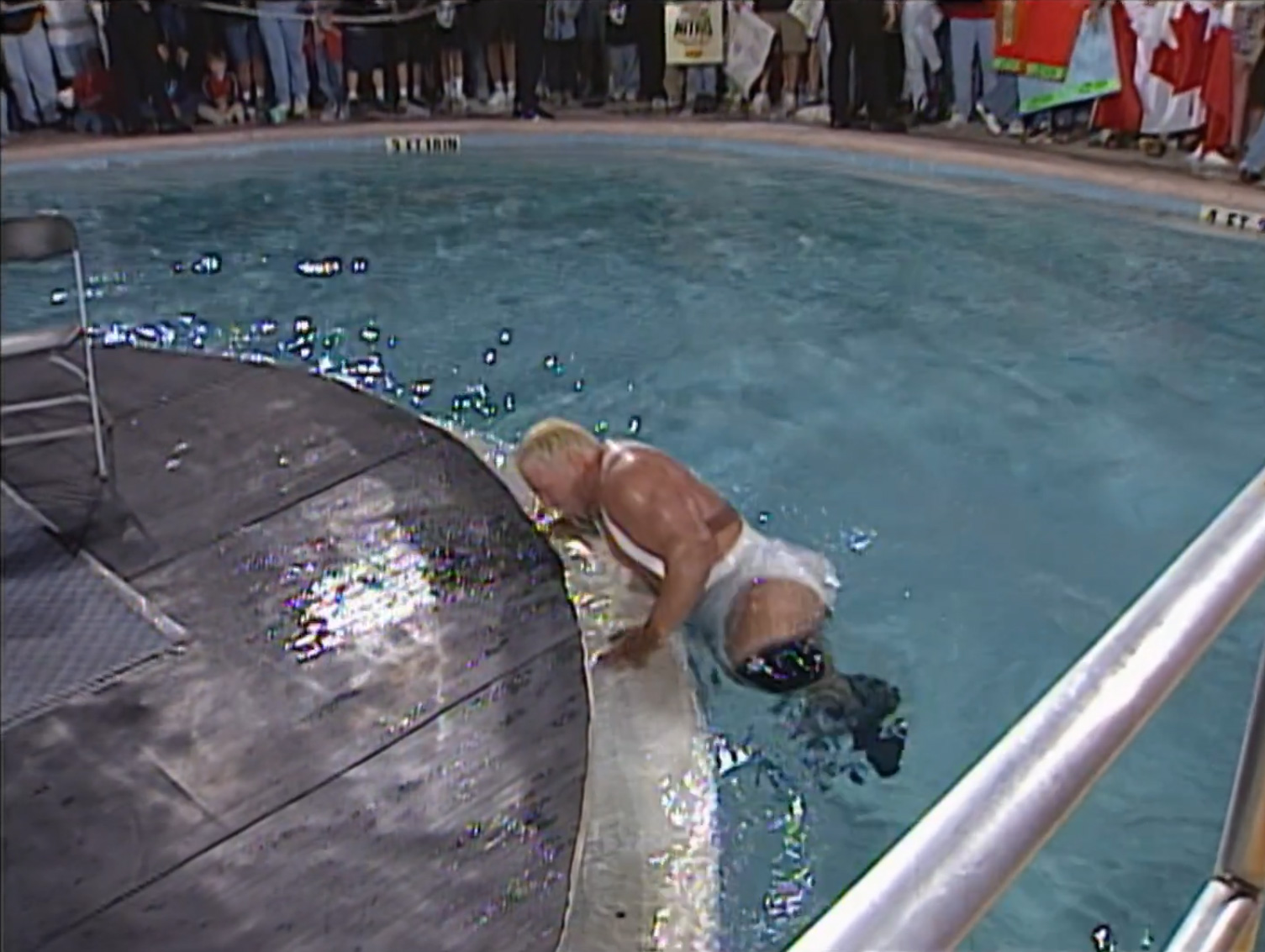 Summary: Both wrestlers look sharp in a big versus big match. Of course, the pool spot remains the major highlight of the match and probably Scott’s career.

After the match, Bagwell, who entered the ring prematurely, whips Traylor with his belt and joins Scott in double-teaming Traylor.

We return to stills from last night when Giant was ready to jackknife-powerbomb Nash, but Brian Adams interfered for the disqualification. It still pisses me off that they didn’t have the match at Starrcade due to Nash’s “heart attack,” screwed up the match at Souled Out with a botched powerbomb, and didn’t blow things off at Uncensored. Instead, they booked a stupid DQ finish.

In the ring, the Nitro Girls aren’t ready to play in traffic yet as they dance again for the Spring Breakers.

Eddie joins Chavo at the entrance with a microphone and gifts him a t-shirt. When Chavo reads the t-shirt, he angrily tosses back in Eddie’s face. Since Chavo lost the match on Thunder last week, he MUST wear the t-shirt. What does that t-shirt say? 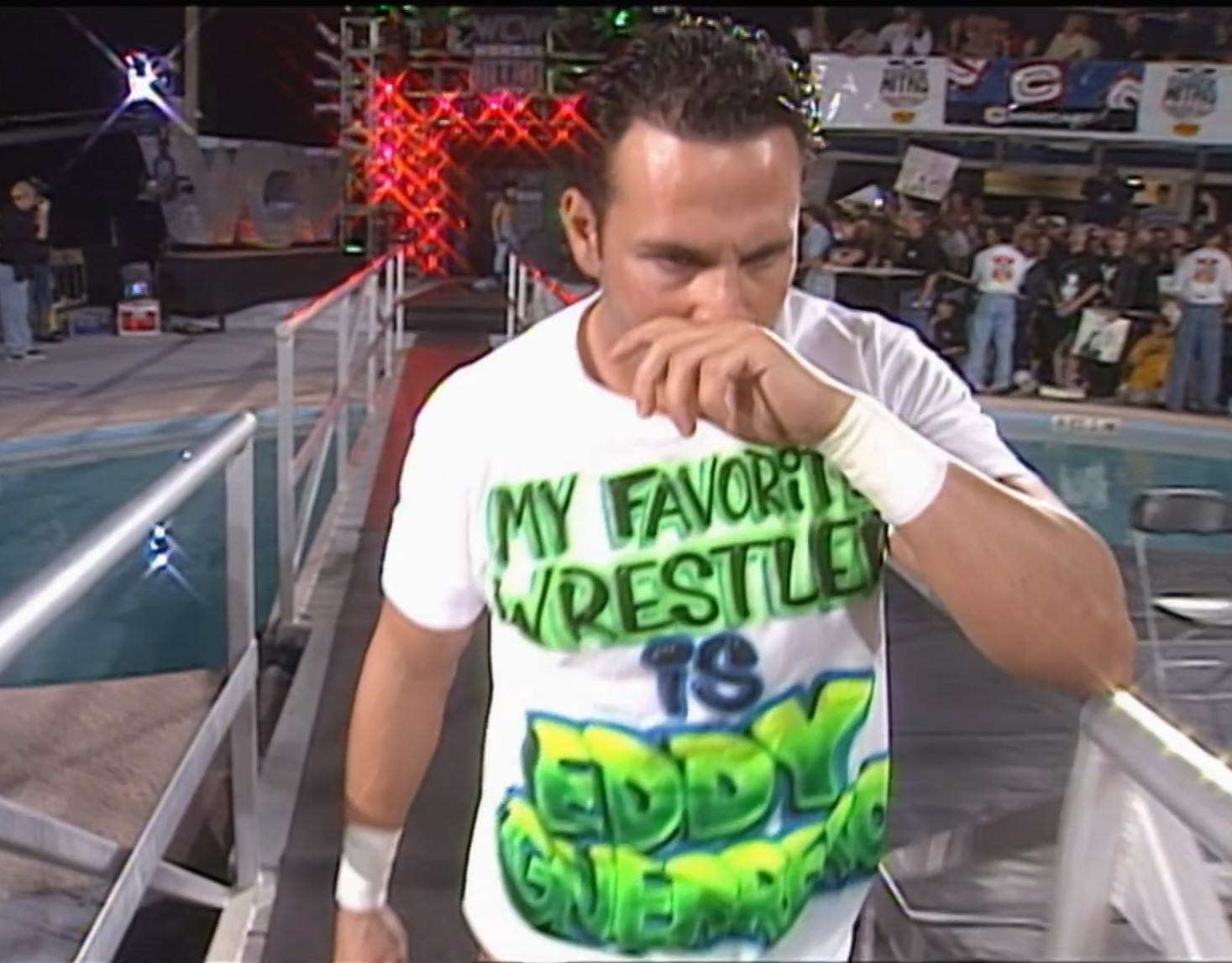 Summary: Showcase match for Booker T as a humiliated Chavo had to wear the t-shirt during the match.

More Cinnaburst madness at the beach as Trinny Updegrove won the $1000 sweepstakes.

Three Nitro Girls dance in the ring while the rest cruise US-98.

Match 9 for the WCW US title: Diamond Dallas Page (champion) versus Reese (w/ the Flock)

Prior to the next match, Jericho takes the microphone and lists his trophies including “Dean Malenko’s dignity.” He then states that he’ll steal the Texas Cloverleaf, rename it the Jericho Maple Leaf, and make it hold #1005 “just for (Dean).”

After the match, Jericho intentionally screws up a Texas Cloverleaf, releases it, and refers to it as a “terrible move, and…not move #1005.” HA!

Atop the rocks on the second level, the Nitro Girls dance while Heenan scurries out of camera range much to Schiavone and Tenay’s delight.

Scott Hall and Nash emerge through the entrance and head to the ring. When a high-octane-fueled Hall performs his survey, the nWo wins it. Nash, in comedic fashion, informs the male portion of the crowd to be “nice to the fat girls over Spring Break. They need a little lovin’ too.” HA! He then cuts a promo on Giant while Hall pantomimes Frankenstein. 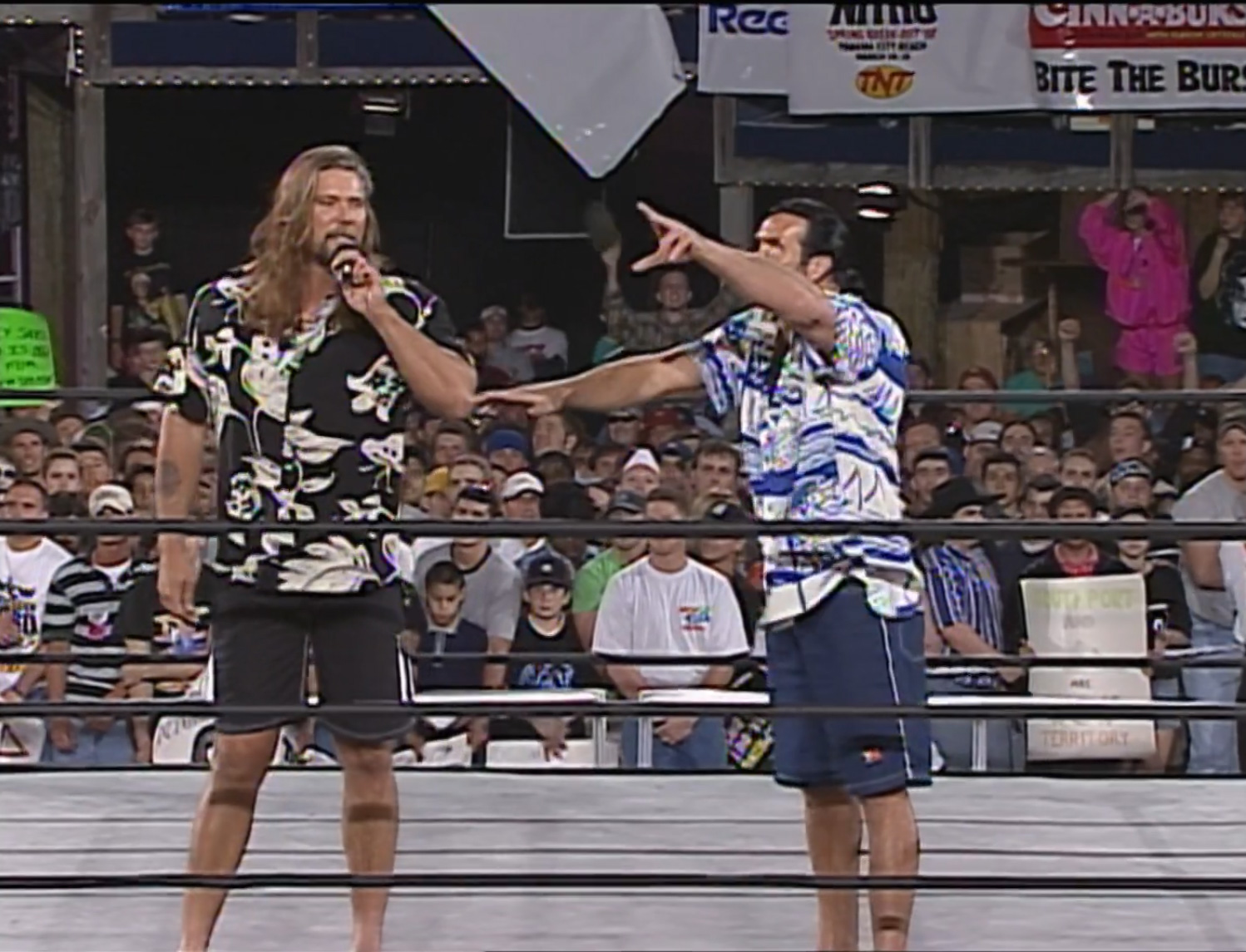 Nash summons Giant, and Hall exclaims “hey Giant, that’s your cue.” Bartender, I’ll have what he’s having. As Giant comes to the ring, Nash escapes the Giant by claiming to be the “1998 Cannonball champion of Spring Break” and cannonballing into the pool. 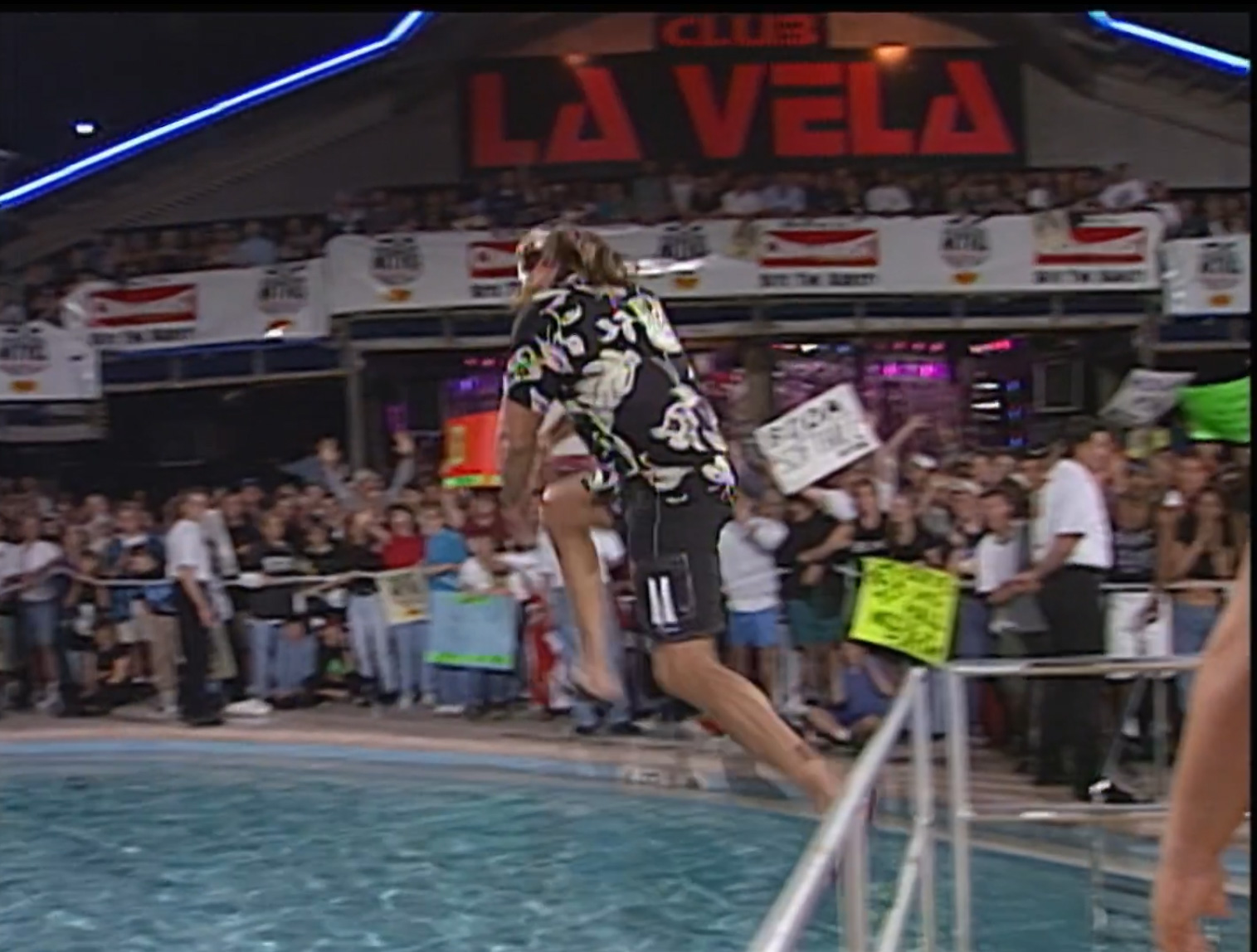 Giant saunters after Hall, catches him, and gives him a wedgie. Next, he military-presses Hall before tossing him into the pool. Although he was quite so beforehand, Hall is now signficantly WET. 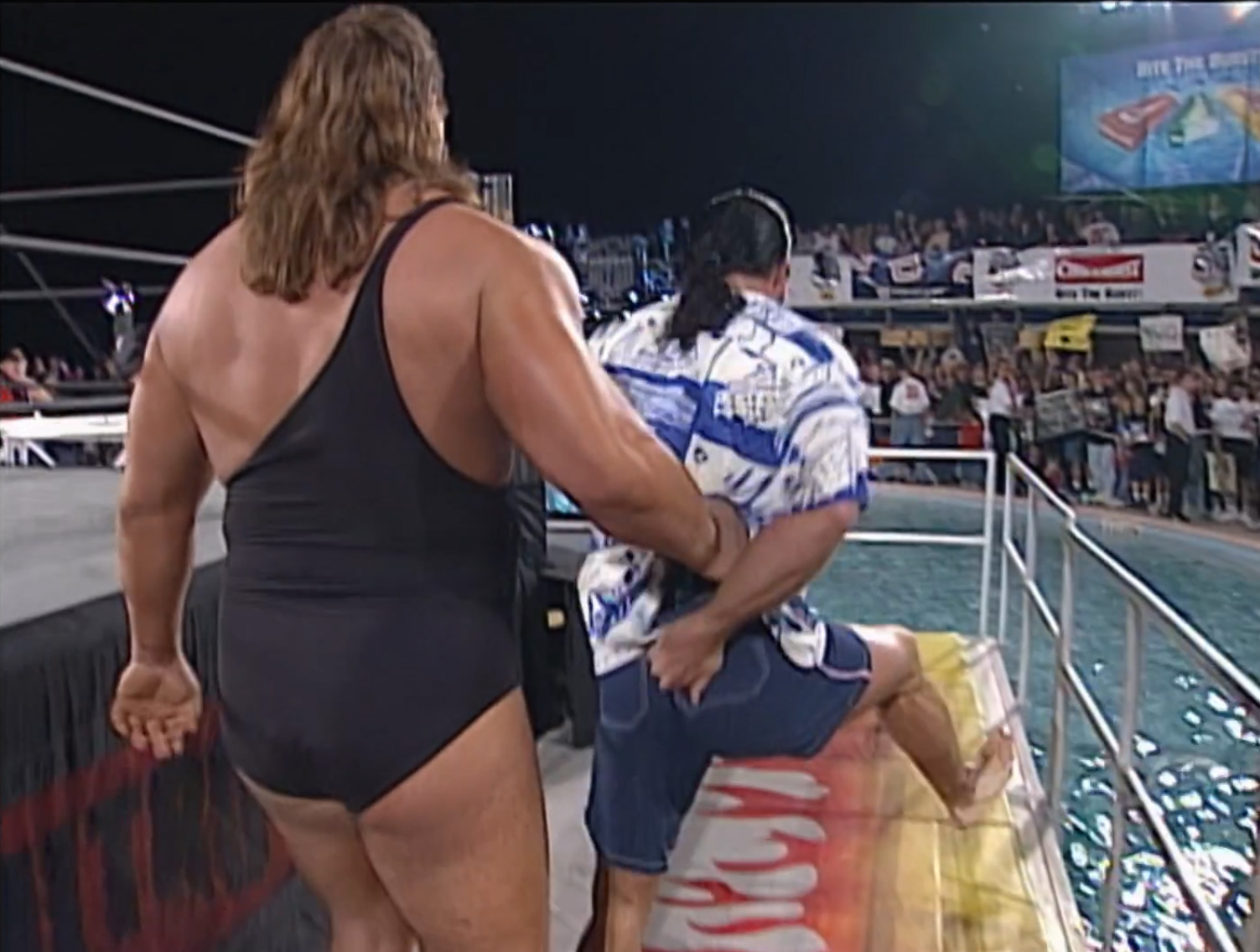 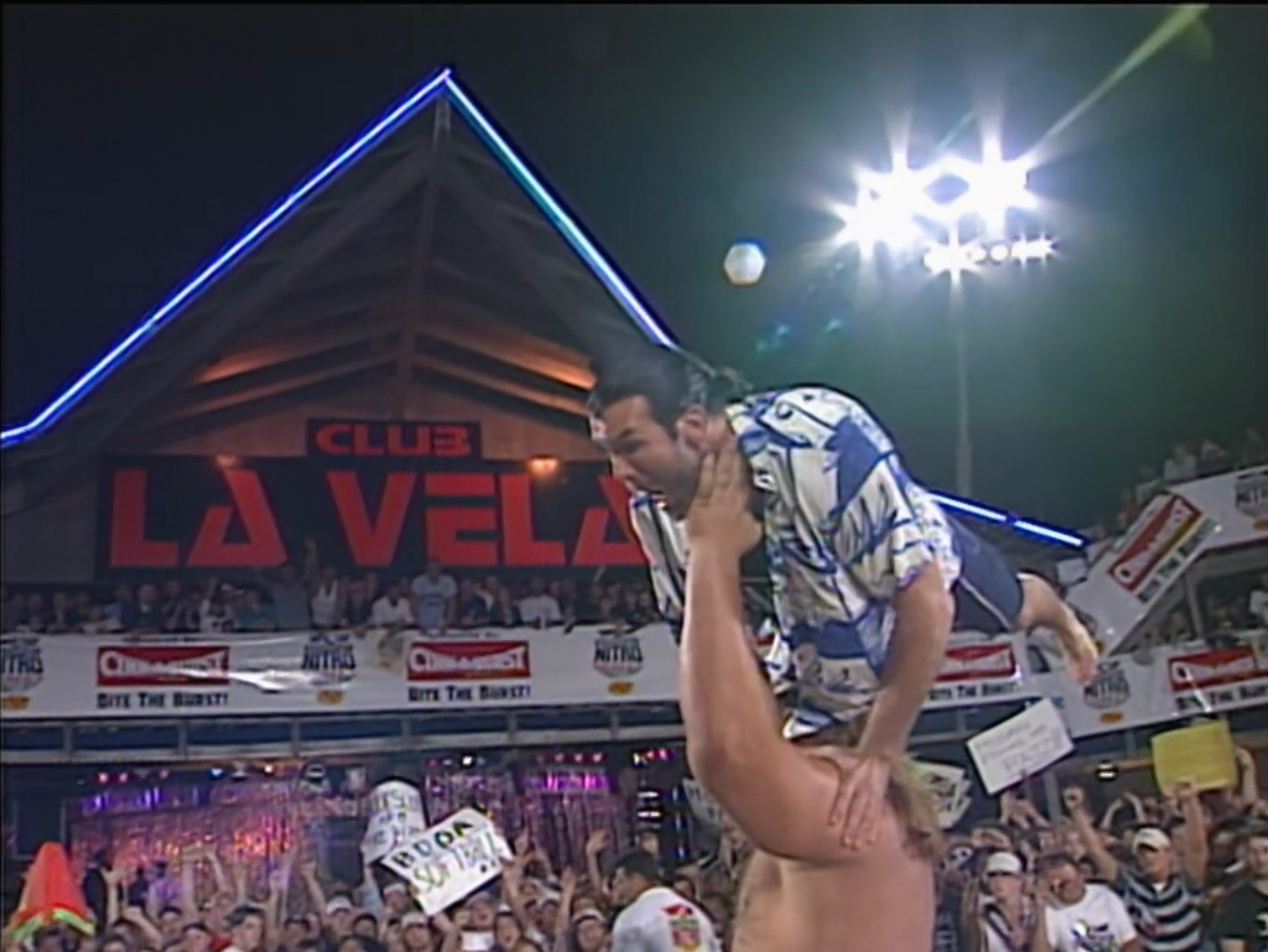 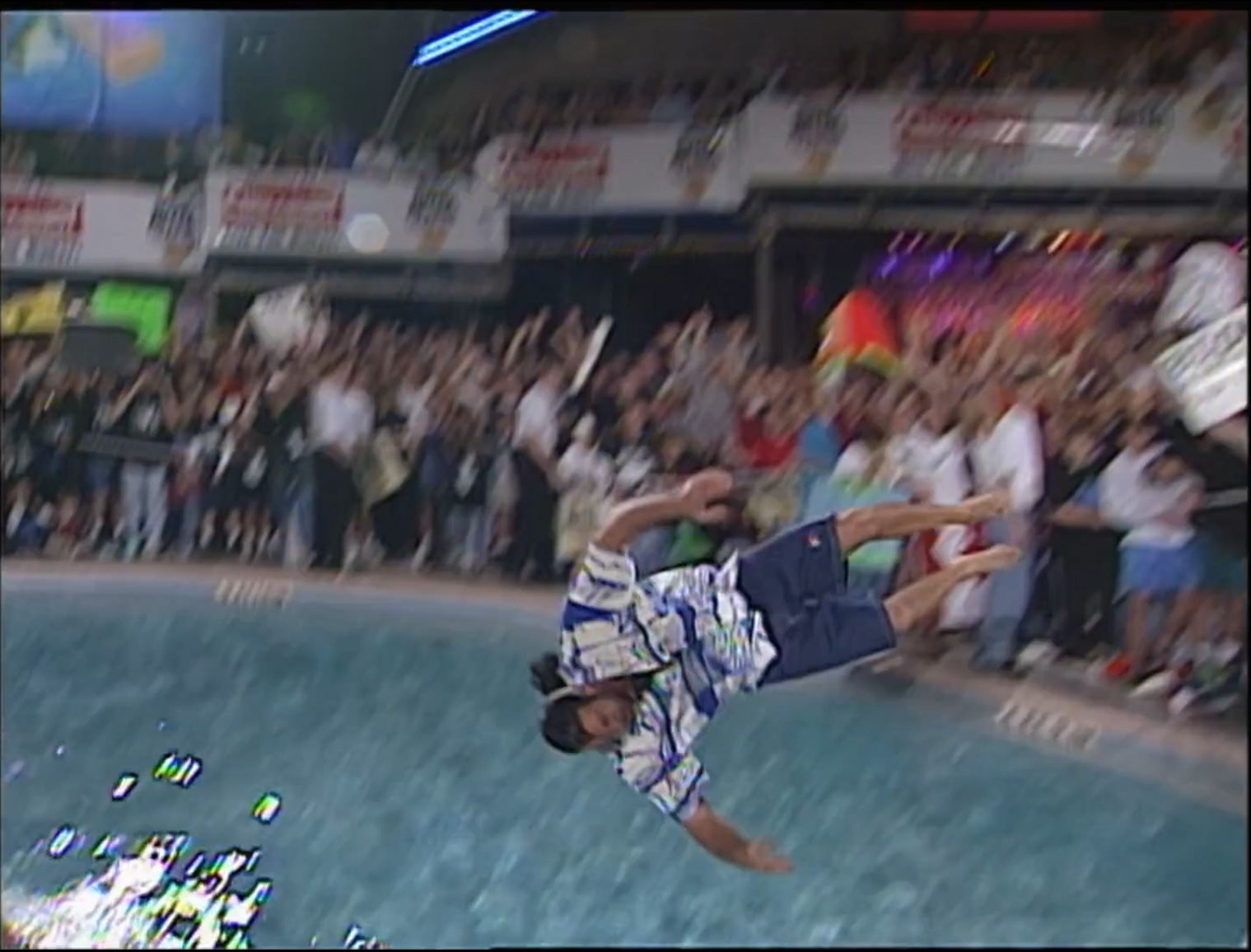 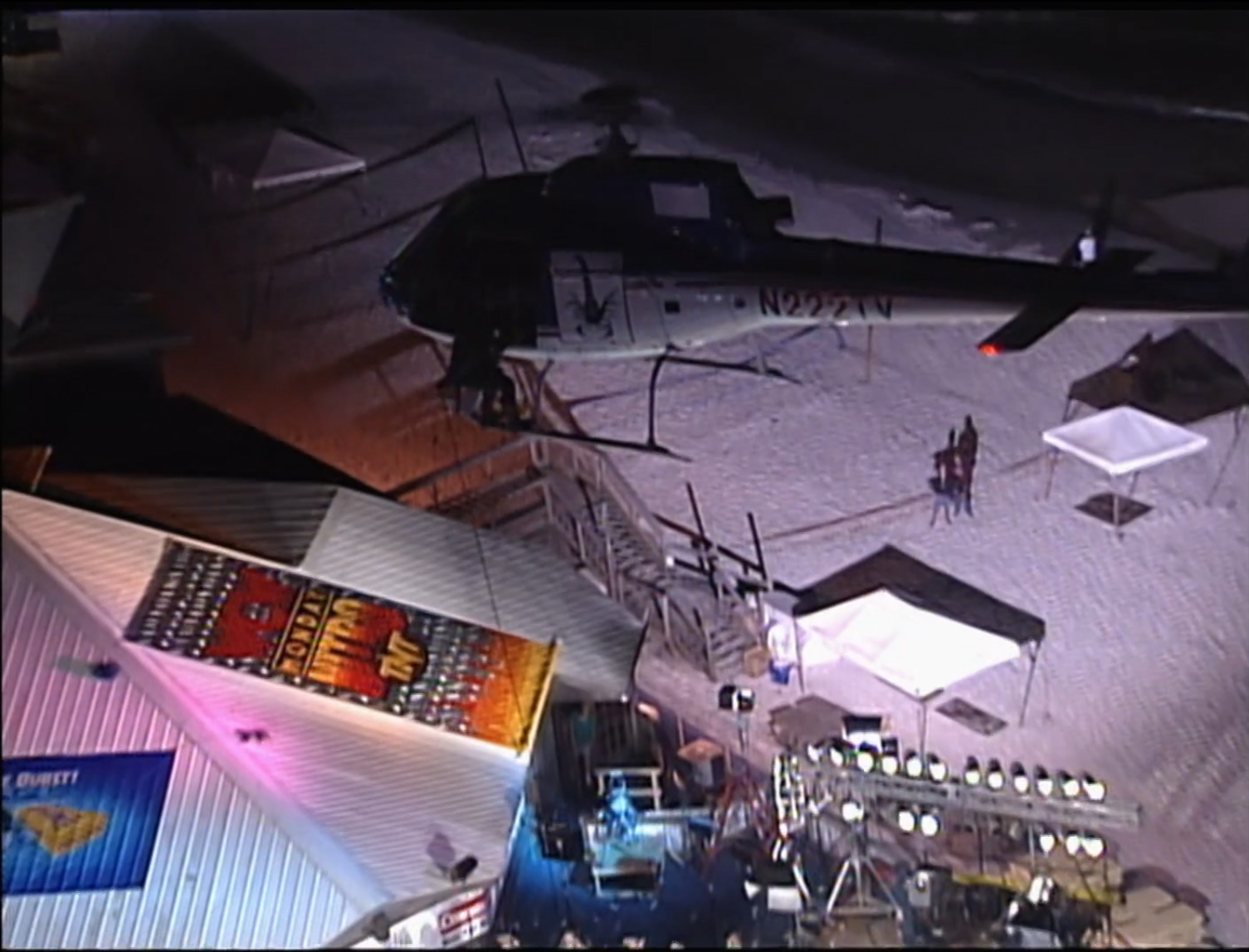 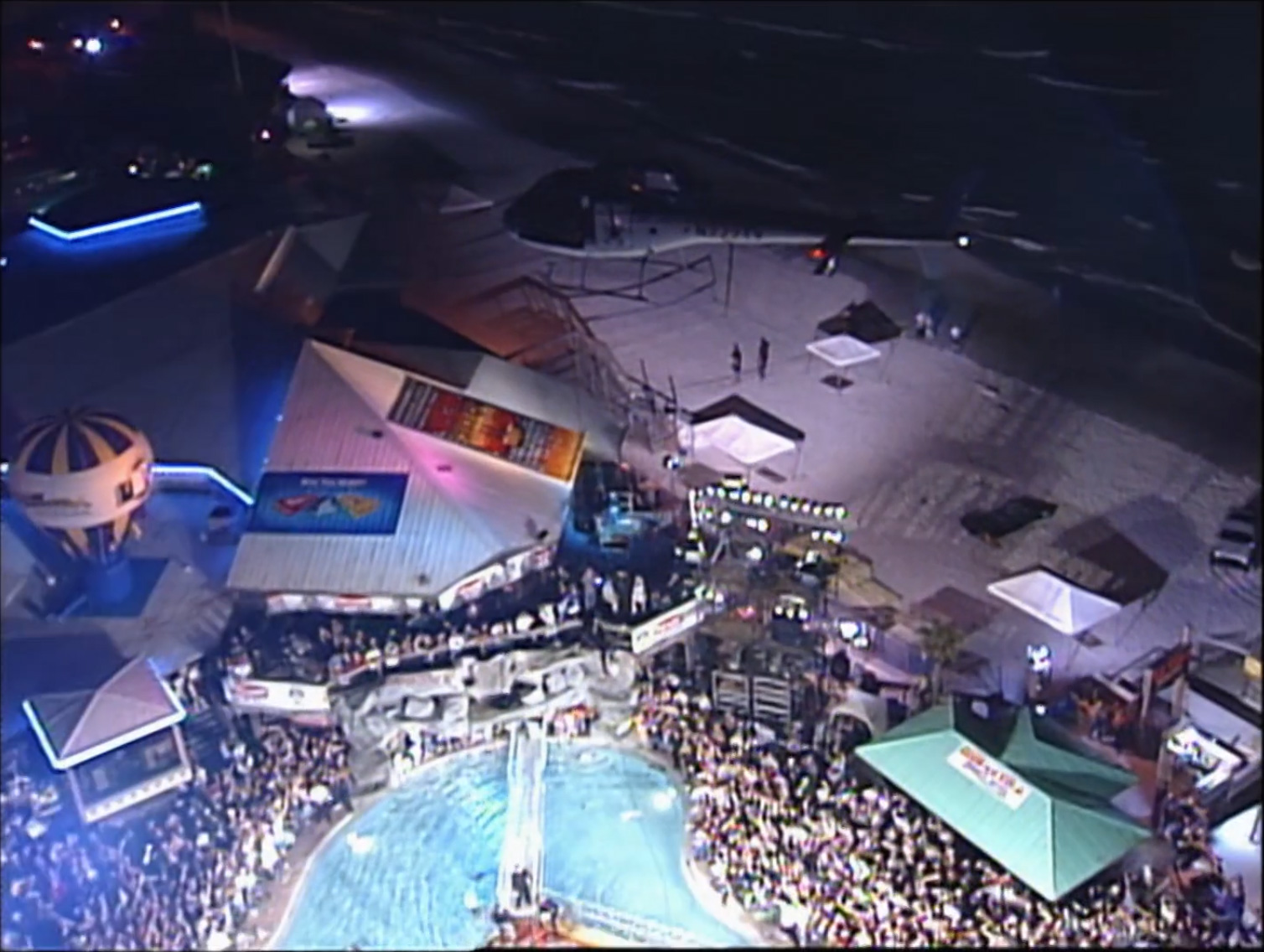 Summary: Spectacular entrance via helicopter by Sting aside, this was, without any equivocation, more storyline than match as the Hogan/Savage soap opera surrounded the main event.

After the match, the rest of the nWo heads to the ring, but Sting and Luger send them packing. In the meantime, Hogan rams Savage side-first into the steel railing to end the show.

Conclusion: If you thought rappelling from the top of the United Center was cool, check out the helicopter stunt by Sting. With the outdoor venue, the episode has a great atmosphere with some decent wrestling. Definitely queue it up ASAP.

IN OTHER NEWS THIS WEEK: On a podcast with Steve Austin, Nash details how and why he and Hall were so inebriated during this episode:

While driving a Chrysler Sebring convertible to the show, Nash and Hall made plenty of pit stops while stuck in traffic on US-98. Not only did they purchase their Spring Break outfits but also enough alcohol to bulldoze a few mules. While Nash remained “in trouble” for the incident, Hall wasn’t as fortunate but instead asked to return to rehab and not return until May.