What will happen when the dream match of Hogan/Savage versus Luger/Sting goes down? Will Booker T retain the TV title so close to the PPV? And what will WCW do with no wrestling on the other channel tonight? Let’s find out!

The show begins on a sad note as a still photo of Louie (Spicolli) Mucciolo is shown. On the day prior to this show, he was found dead at age 27 after overdosing on Soma and wine. Apparently, he was sober, but after hearing about his mother’s battle with cancer, he relapsed. RIP Louie Spicolli. The bell tolls for him.

The entire nWo minus Savage emerges and heads to the ring. While Hogan spews about “corporate gaga,” he’ll pay for Patrick’s legal counsel so that he will referee the PPV main event. He then refers to Savage as a “dummy” and cuts a promo on him. Meanwhile, the Tampa faithful LOUDLY chants “Hogan sucks.” In case you’re unaware, Hogan actually LIVES in the Tampa-St. Petersburg area.

Speaking of Savage, he stands next to the broadcast location alongside Elizabeth. He runs down Hogan, and they banter while the Tampa faithful chants “Mach-o.”

Prior to the opening match, George Steinbrenner is shown among the Tampa faithful.

Schiavone then asks Zbyszko about Spicolli putting him on the spot on LIVE TV. Uncomfortably, Zbyszko says “let it rest.” Obviously, the Zbyszko-Spicolli match at the PPV has been cancelled.

Afterward, the Outsiders invade the broadcast table. Nash claims shenanigans by WCW and wants their title shot tonight instead of at the PPV. Seeking someone in charge, Hall requests “the guy in the skirt (Piper).” Before leaving, Nash insults Zbyszko.

TIME-KILLING SEGMENT #3: We return to the waste of time that was Hogan’s segment from Thunder. 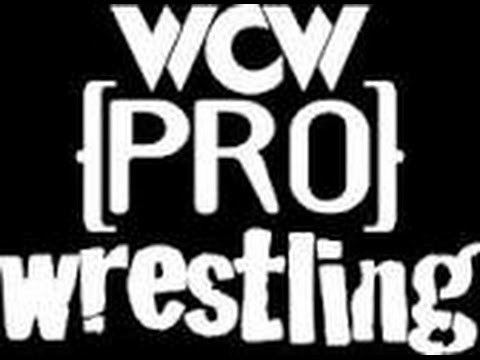 Prior to the next match, Hall conducts his survey. Tampa is certainly WCW country, but the frat boys still chant “n-W-o” like sheep. I wonder if Jagermeister was a pre-show ritual for them.

Summary: The Outsiders are over and beat Public Enemy at their own game despite the DQ finish.

Upon performing a Hannibal Lecter impersonation, Nash gets cuffed and escorted backstage while chanting “Attica” again.

This week’s Nitro party pack winner is Chris Irgo from Leesville, SC. His video is shown.

TIME-KILLING SEGMENT #4: At the entrance, “Mean” Gene Okerlund interviews referee Nick Patrick. While complaining about conspiracy, Patrick compares his situation to President Clinton and runs down the media.

Backstage, Steve “Mongo” McMichael confronts Davey Boy Smith who’s drinking a cup of coffee. He then declares “don’t stand there drinking coffee when a man’s talking to you” and slaps the cup away. They brawl until WCW Security breaks it up. 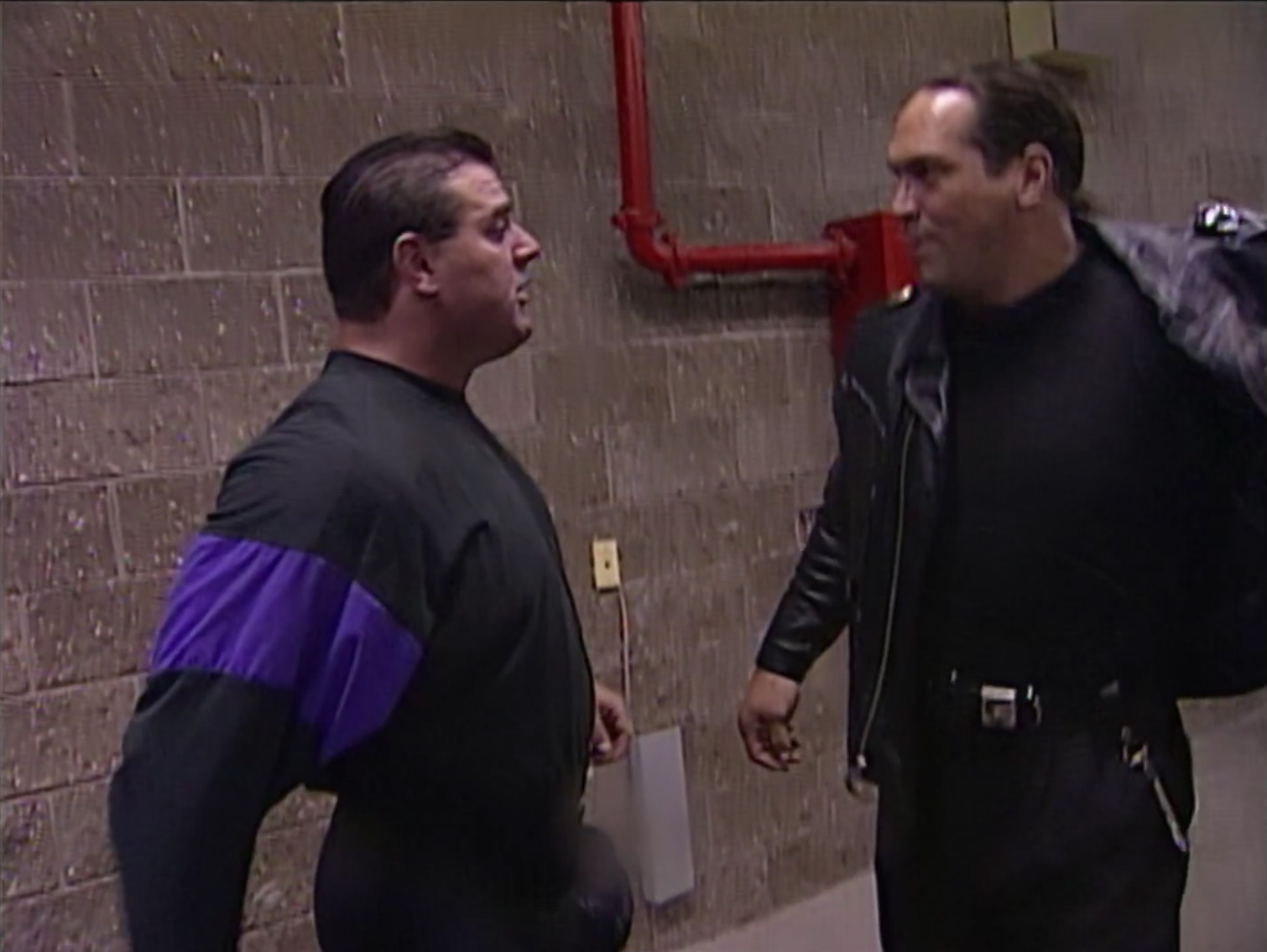 Summary: Storyline finish to a decent match with psychology and high-flying.

At the entrance, the Nitro Girls dance in silver and black while Schiavone shills the Nitro Party contest.

Summary: Solid match with plenty of psychology, high-flying, and storytelling.

In the ring, Okerlund interviews DDP who respects Benoit for standing on his own and wants Benoit “all jacked up” at the PPV. He and Benoit want to take out both Raven and Saturn on Thunder. When Raven stands up, DDP challenges him RIGHT NOW. Raven jumps the railing and enters the ring. While Saturn joins Raven, Benoit jumps into the ring to even the odds. That sends Raven and Saturn scurrying to the floor. Stay tuned for this match on Thunder.

Prior to the next match, we revisit Thunder when Meng LOST HIS DAMN MIND even putting the Tongan death grip on Barbarian. 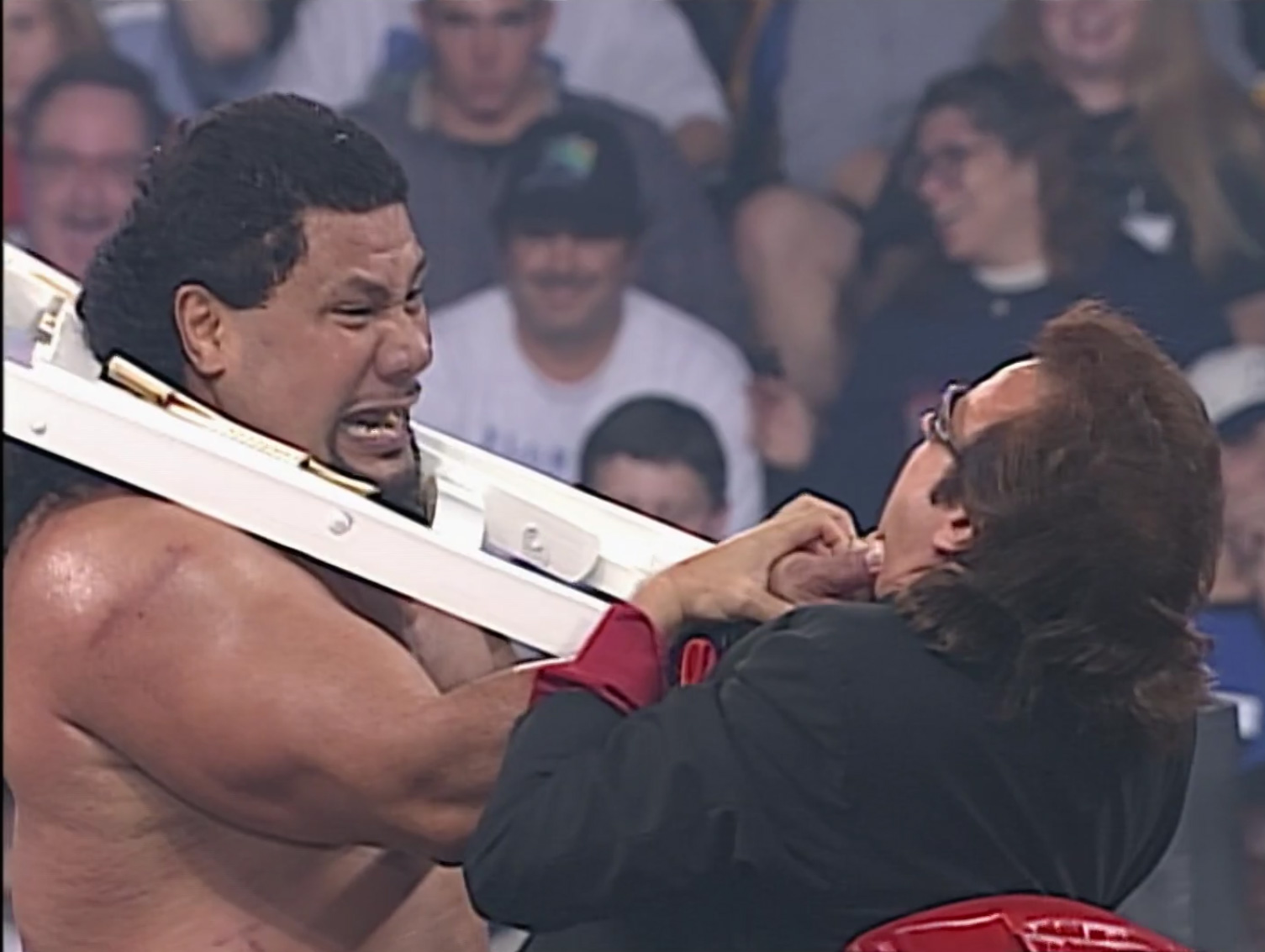 Nitro Girls dance at the entrance in the same black and silver outfits. Lazy!

Prior to the next match, Disco makes his entrance, but La Parka emerges and FLATTENS him with a series of chair shots to the back. To substitute for the now-seriously-injured Disco, Martel enters the ring despite getting a TV title shot later tonight.

Summary: Flock interference cost Martel a victory and perhaps his consciousness. How will he be ready for Booker T later in the show? 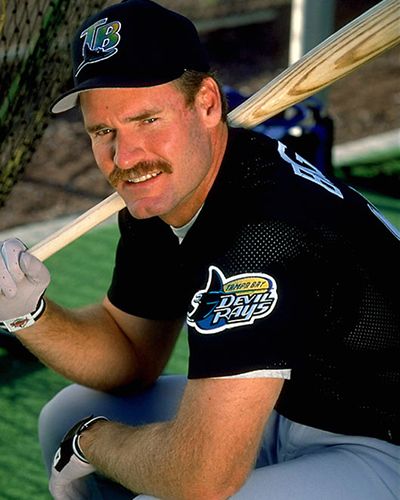 Summary: While a title change wasn’t going to happen, the interference prevented the champs from scoring a much-needed victory before the PPV. Also, notice that Scott didn’t participate much.

After the match, Vincent floors DiBiase, and the nWo ambushes Rick. Scott then chases them away with a chair, and the nWo celebrates at ringside. They didn’t touch Scott.

Prior to the next match, we revisit Thunder from 1/22 when Saturn tossed Martel through a glass door. 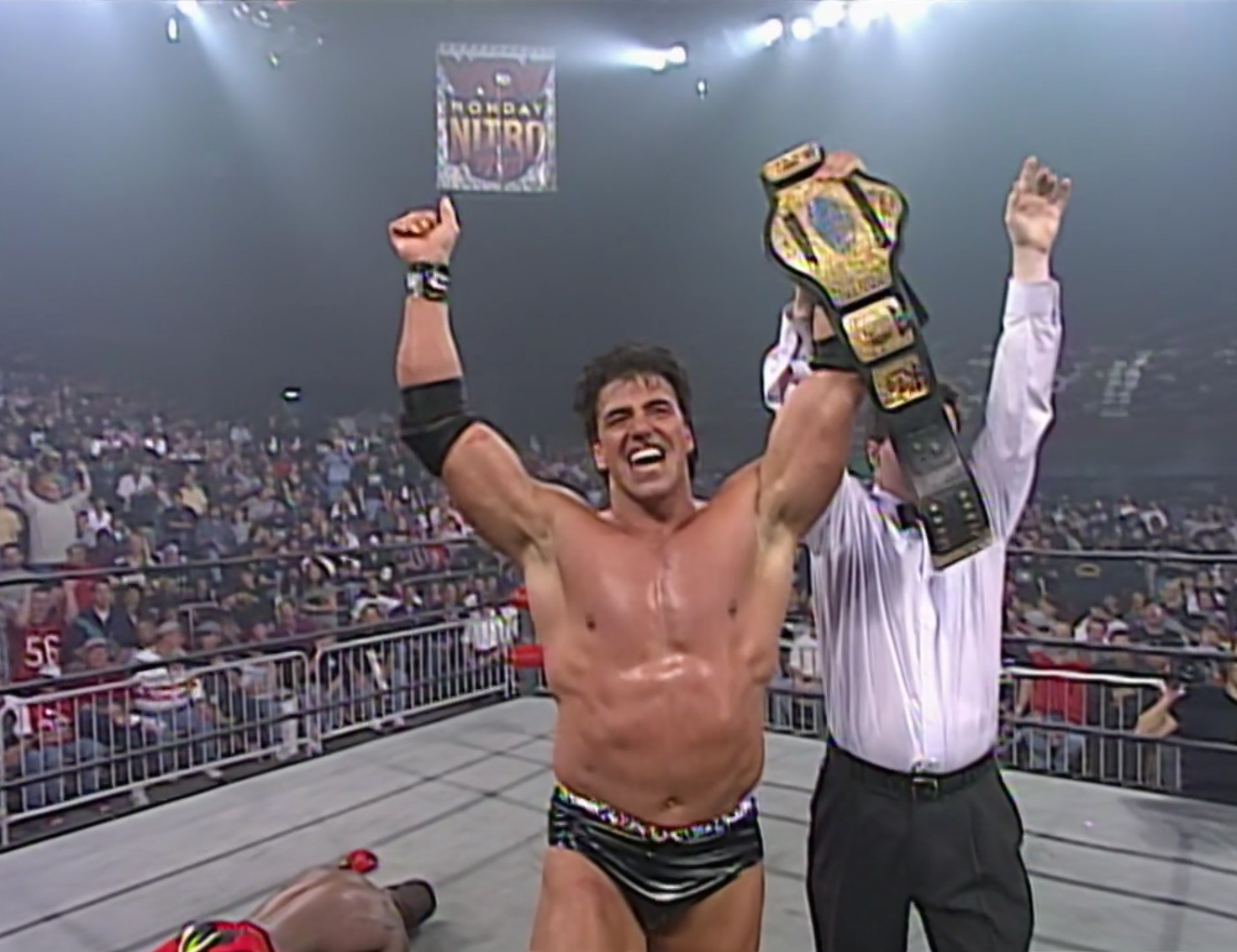 Summary: With the PPV six days away, this was a stunning turn of events. How will the TV title be defended?

Nitro Girls dance at the entrance in red and silver.

In the ring, Okerlund interviews Bret who responds to Hogan and calls him “scared.” Suddenly, Brian Adams, in a trench coat, steps into the ring to interrupt. As he claims to have Bret’s back, Adams calls out Hogan. He attempts to shake hands with Bret, but Okerlund spoils the ruse. 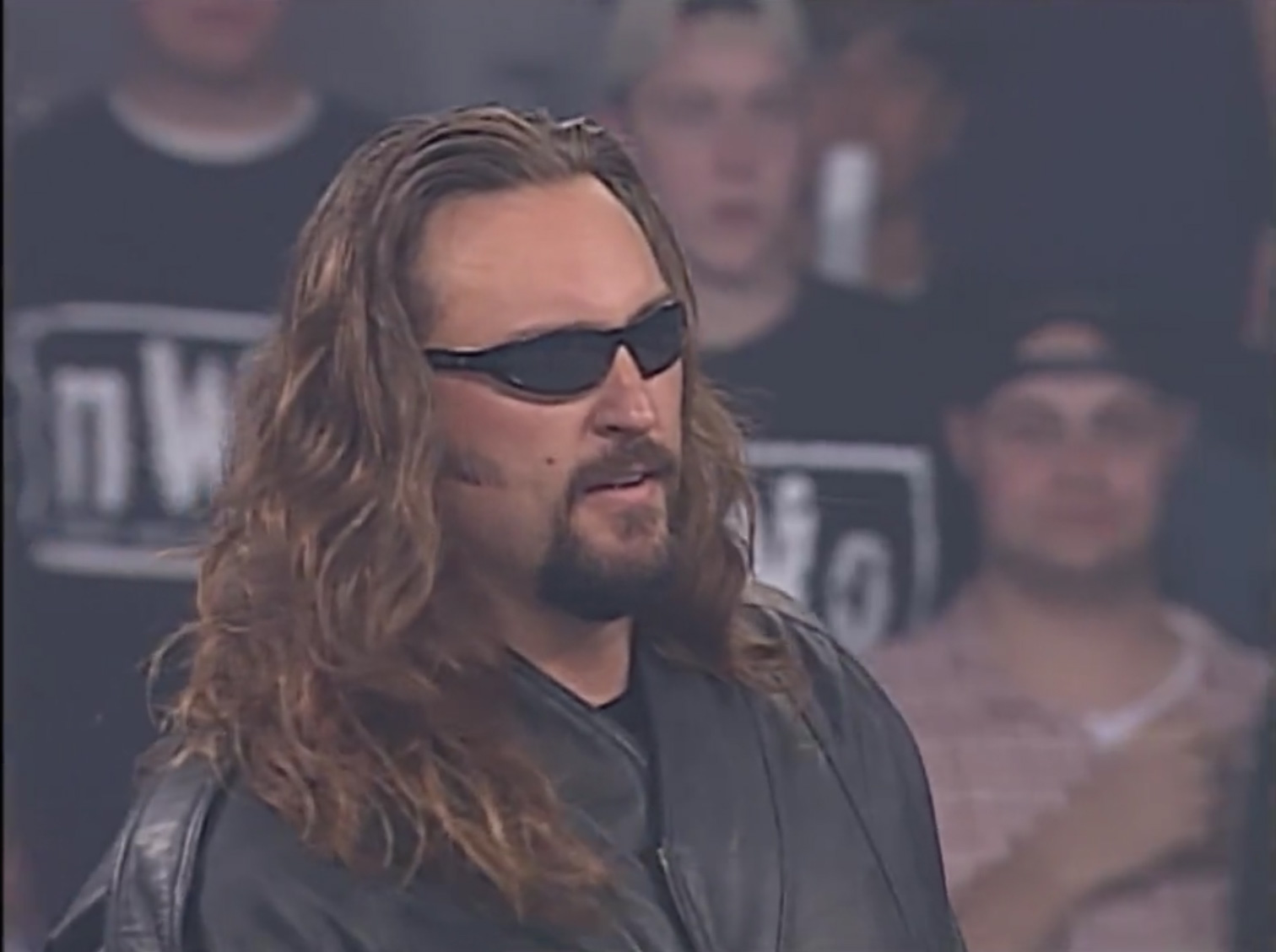 Hennig and the nWo attack Bret, and Adams unveils his nWo t-shirt. While Hogan approaches the ring, the Tampa faithful chants “we want Sting.” Hogan pummels Bret with some nWo assistance. Abruptly, “Nature Boy” Ric Flair arrives to save Bret’s bacon. He reminds each nWo member that they’re in SOUTH Florida if you catch my drift. Ultimately, he and Bret scatter the nWo from the ring and shake hands. 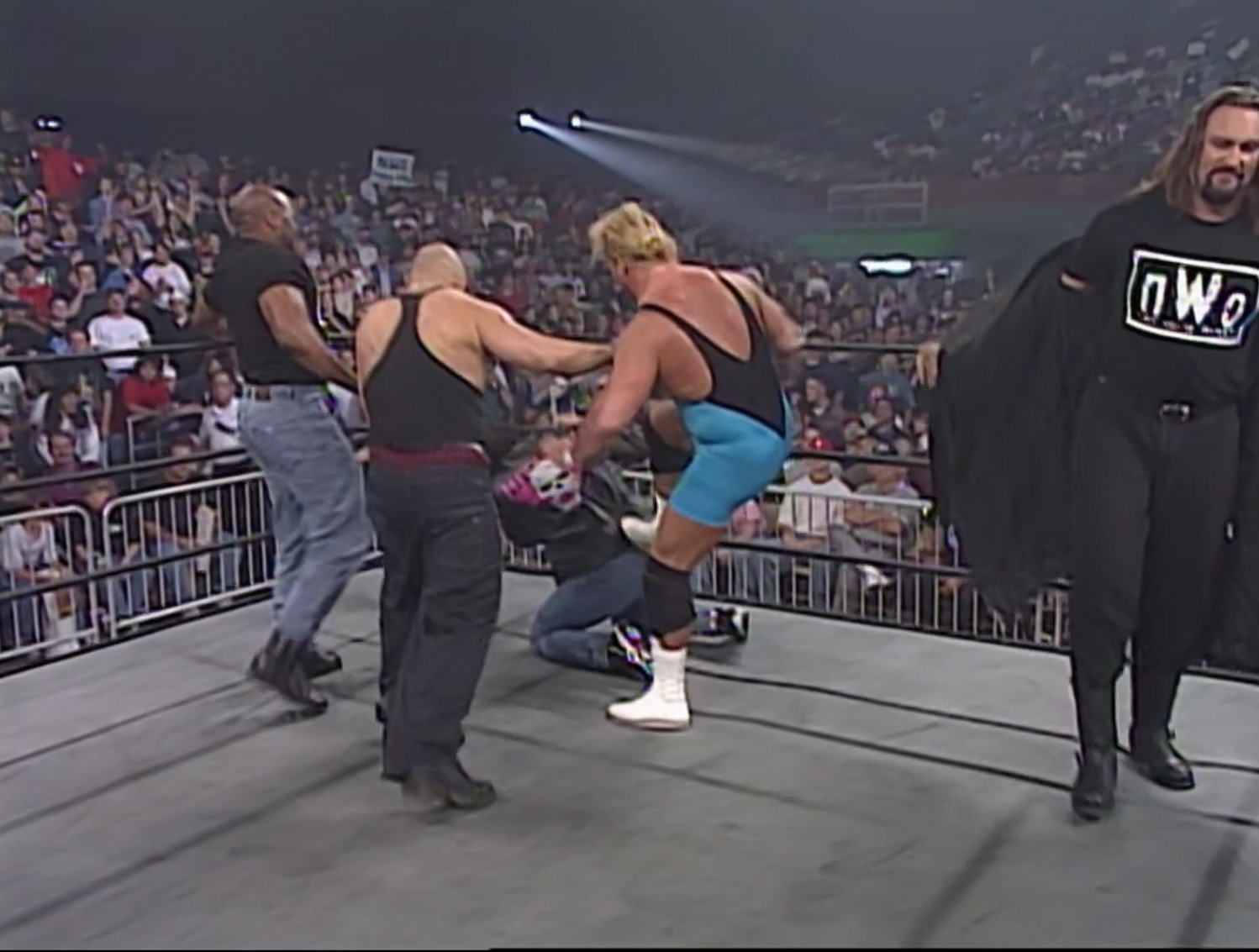 At the entrance, Okerlund interviews chairman of the WCW Executive Committee J.J. Dillon who requests Booker T, Saturn, and Rick Martel’s presences. According to Dillon, Martel will defend the TV title at the PPV against Booker T. Appropriately, Saturn complains that not only did he have a guaranteed title shot but also defeated Martel earlier tonight. Dillon clarifies that the winner of Booker T-Martel will defend against Saturn. Oh, that will replace the now-cancelled Zbyszko-Spicolli match. 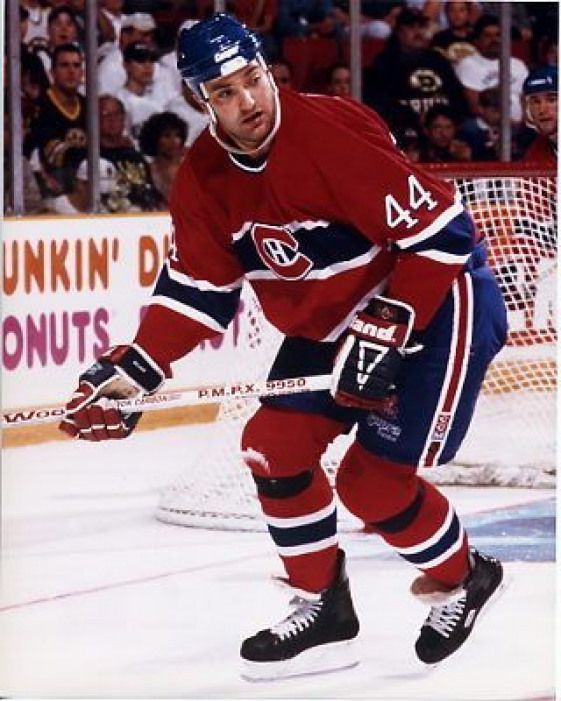 Summary: Another incredible match between these four showcasing how talented they are. Bravo, gentlemen!

TIME-KILLING SEGMENT #5: Prior to the main event, Bischoff comes to the ring and explains that Hogan’s running a little late due to writing a $50,000 check for Nash’s powerbomb fine.

Summary: MOLTEN main event with a shitty finish. With the PPV on the horizon, no one was going to job, but…

After the match, Savage and Hogan brawl until Sting, Luger, Bret, and Flair clear the ring of the nWo.

Conclusion: The third hour was the bees’ knees, but it took a while for them to get there. With the fantastic tag match between Jericho/Eddie and Malenko/Benoit, the introduction to the man formerly known as Crush, the TV title change and subsequent announcement, and the ever-so-subtle lack of action by Scott, the main event acted like the proverbial cherry on top to a great show.

On the other hand, the Sick Boy and Enos matches were pure filler. Also, there was a lot of repetition in an effort to maintain a strong audience, but I believe it wasn’t necessary. Thank goodness Kidman/Dragon, Meng/Barbarian, and Martel/Saturn ignited the pot to get it boiling. While this was a really good go-home show, I wonder what Thunder has in store for us.