Can Undertaker and Mankind defeat Michaels and Helmsley? Will either team co-exist? How will Pillman deal with yet another match while wearing a dress? Plus, an update on Stone Cold Steve Austin. Let's dig in!

To begin the show, Vince interviews "Ravishing" Rick Rude. Interestingly, the Atlantic City faithful did NOT chant "you sold out" at him unlike the Fort Lauderdale faithful last night. Nevertheless, Vince asks Rude who "paid the premium," but Rude dodges the question. While Rude drops some insurance advertising slogans, he promises a Rude Awakening to the nemesis of anyone who pays the premium.

After a commercial break, we see Michaels having a heated discussion with Commissioner Slaughter.

Prior to the opening match, we revisit last week's episode when Animal assisted Hawk in his victory in a "country whippin'" match.

Summary: Since these teams are very familiar with one another, a quick 5-minute TV match isn't terrible. At the very least, it served as an appetizer for the PPV. 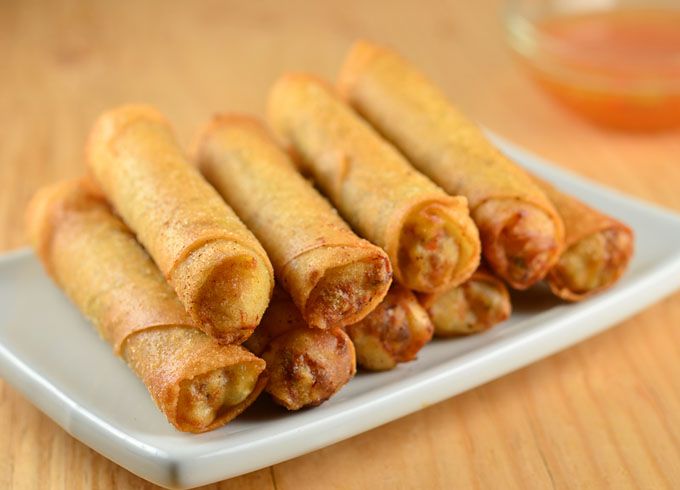 After the match, all three teams fought with each other until officials broke it up.

After a commercial break, Michaels is upset about being "thrown to the lions." Um, back in '97, you would have jumped into the middle of the Roman Coliseum for some soma, Shawn. Prior to the match, Christopher claims his last match on RAW is WAR was a fluke. Funk rebuts. 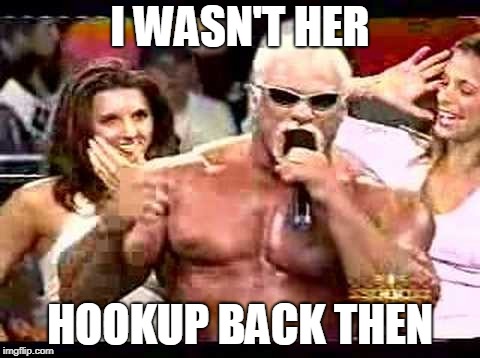 Summary: For the second week in a row, Funk won unexpectedly. 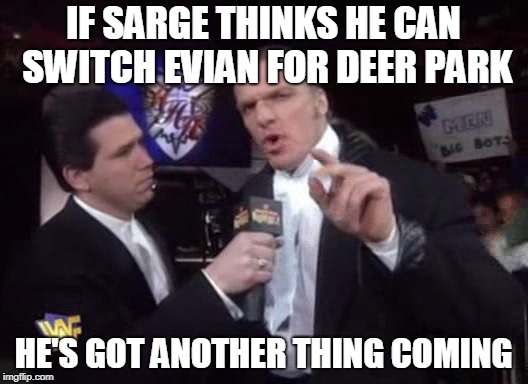 Match 3: Ken Shamrock versus the Sultan (w/ the Iron Sheik)

The Nation of Domination comes to the ring along with newest member the Rock. As Ross enters the ring to interview them, the Atlantic City faithful chants "Rocky sucks." Faarooq then derogatorily runs down Ahmed Johnson for wanting to be like Michaels and Austin. When he discusses Vega and Crush, Faarooq mentions their upcoming street fight at the PPV. He then introduces the Rock. Please allow me to transcribe:

"I got three words—die, Rocky, die. That's the gratitude I get from you pieces of crap. For all my blood, my sweat, and my tears...this isn't about the color of my skin. This is about respect. I became the youngest Intercontinental champion in WWF history, and what did it get me? In arenas across the country, I heard chants of 'Rocky sucks.' Well, Rocky Maivia's a lot of things, but 'sucks' isn't one of them.

"It's not a black thing. It's not a white thing. Let's talk about a racist faction...the DoA. The DoA epitomizes racism. To hell with the DoA. I wanna make a point to all you jackass fans out there. Rocky Maivia and the new Nation of Domination lives, breathes, and dies respect. And we will earn respect by any means necessary."

Suddenly, the DoA appears on the Titantron, and Crush refers to them as the "Nation of Constipation." HA! He then challenges the NoD "in the parking lot." The NoD then heads backstage.

HOT TAKE: What a difference a day makes. Since November, plucky rookie Rocky Maivia was a baby-kissing, happy-go-lucky babyface whom the WWF fans detested. Upon returning from injury, the heel version (a.k.a. The Rock) cuts a damn good promo right out of the box. Methinks this guy could amount to something. 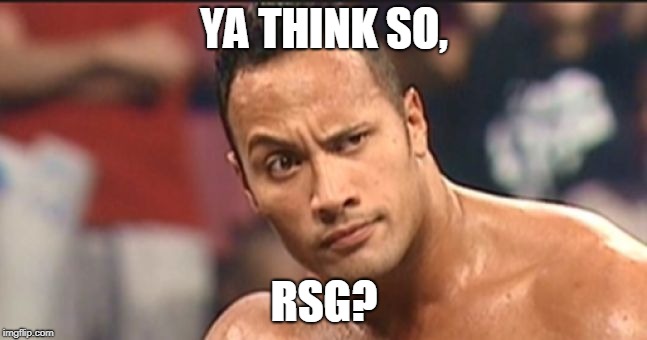 Helmsley along with Chyna subtly references the Curtain Call incident, but Vince interrupts him.

Back in the parking lot, the NoD and DoA brawl with one another. In the meantime, Los Boricuas steal DoA's motorcycles. SNEAKY!

Prior to the next match, we revisit RAW is WAR from two weeks ago as well as last week's show to showcase the dresses Pillman has worn. 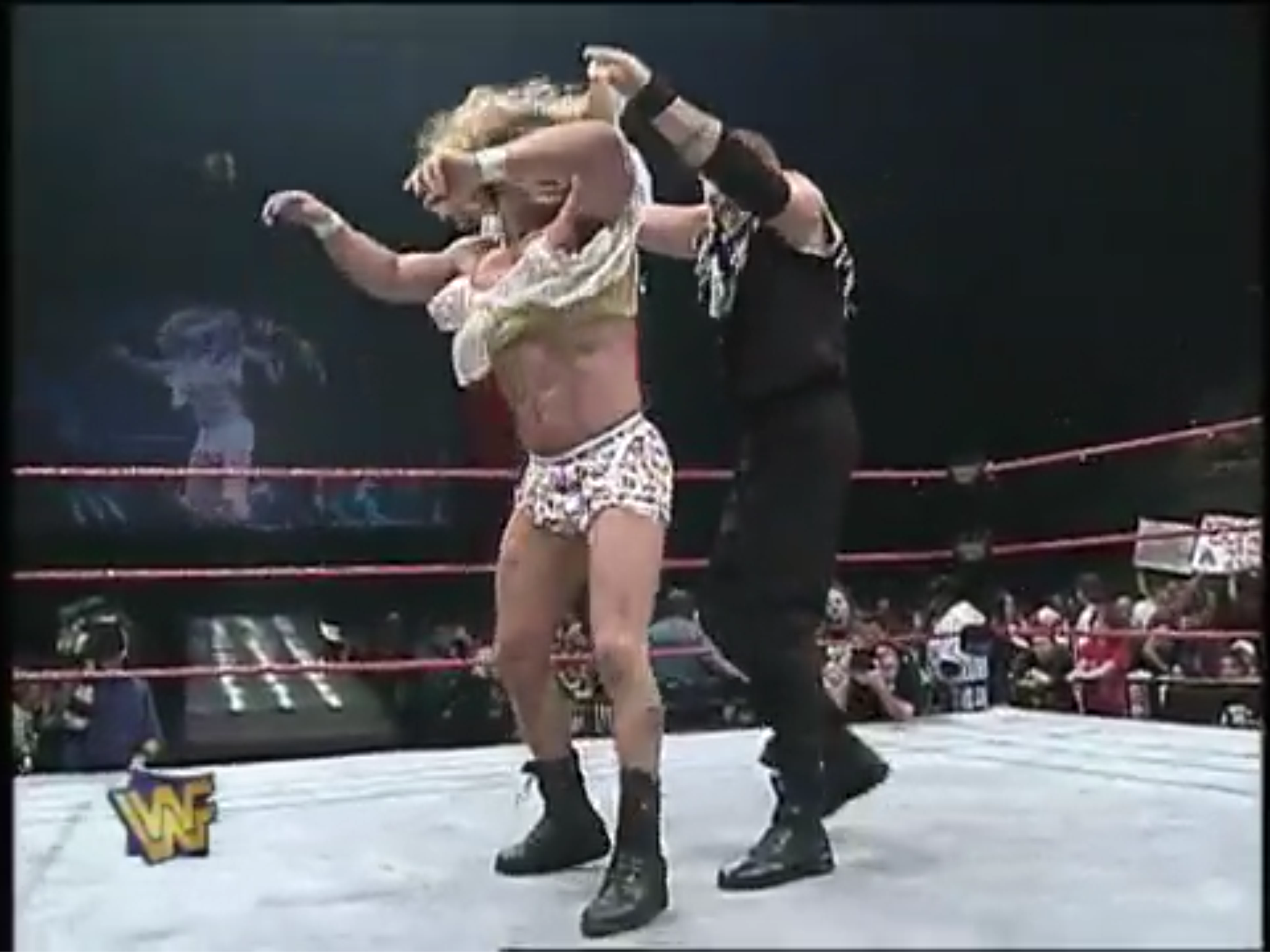 At the entrance, Michael Cole interviews Goldust who makes fun of Pillman. Speaking of whom, Pillman grabs the microphone and challenges him to a match at the PPV. What's the stipulation, you ask? If Pillman loses, he'll "leave the WWF forever." However, if Goldust loses, Marlena becomes Pillman's "personal assistant for 30 days." When Goldust refuses, Pillman claims that their daughter Dakota is his daughter and not Goldust's. Oh my!

Quicker than a hiccup, Goldust hits the ring to chase off Pillman, but Marlena accepts the challenge on her husband's behalf. Out of disbelief, Goldust questions Marlena about her acceptance.

Summary: Showcase match for the #1 contender for the WWF title. Unfortunately, except during patriotic moments, Patriot is NOT over.

After the match, Bret distracts Patriot, and Vader nails him. Upon tossing Patriot back into the ring, Vader clotheslines him. He then slams Patriot while Bret enters the ring. As Bret lays the Canadian flag across Patriot, Vader questions him and breaks the flag pole to a raucous ovation. Following that, Bret and Vader brawl until the Hart Foundation joins the fray. Officials then separate the Patriot and Bret to end the segment. Case in point, Vader got more heat than Patriot.

We then revisit Summerslam '97 when Owen dumped Stone Cold Steve Austin on his head. During analysis of the move, Vince stated it resulted in "spinal shock syndrome."

Next, in an interview taped earlier today in Philadelphia, Ross sits down with Austin. While Austin badmouths the WWF's fruit basket/get-well-soon present, he states that "shit happens" in regards to the receipt of the tombstone. He then vows to get revenge against Owen for it. According to one doctor, he recommended that Austin should be "doing something else." Austin refutes the recommendation and awaits an appointment with a specialist tomorrow.

With respect to his future, Austin "may take...a few weeks off," but he's coming back. Nothing's going to stop him, and he'll be at the PPV.

Speaking of which, the PPV is sponsored by Stri-dex. 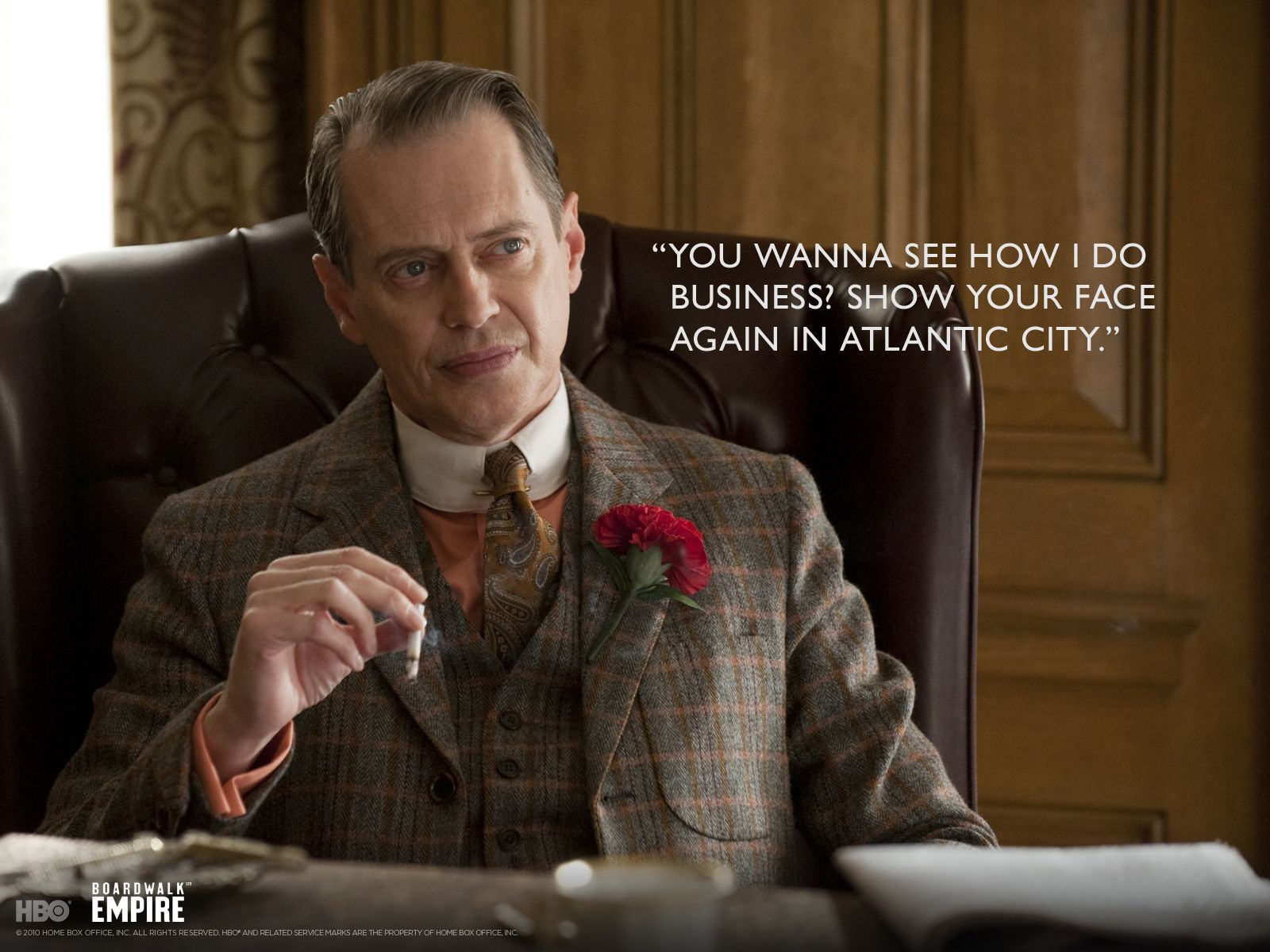 Summary: Good precursor to the Michaels-Undertaker match at the PPV.

After the match, Undertaker is BUSTED OPEN. Michaels WALLOPS him again with the chair, but he and Helmsley scatter when Undertaker rises to his feet. 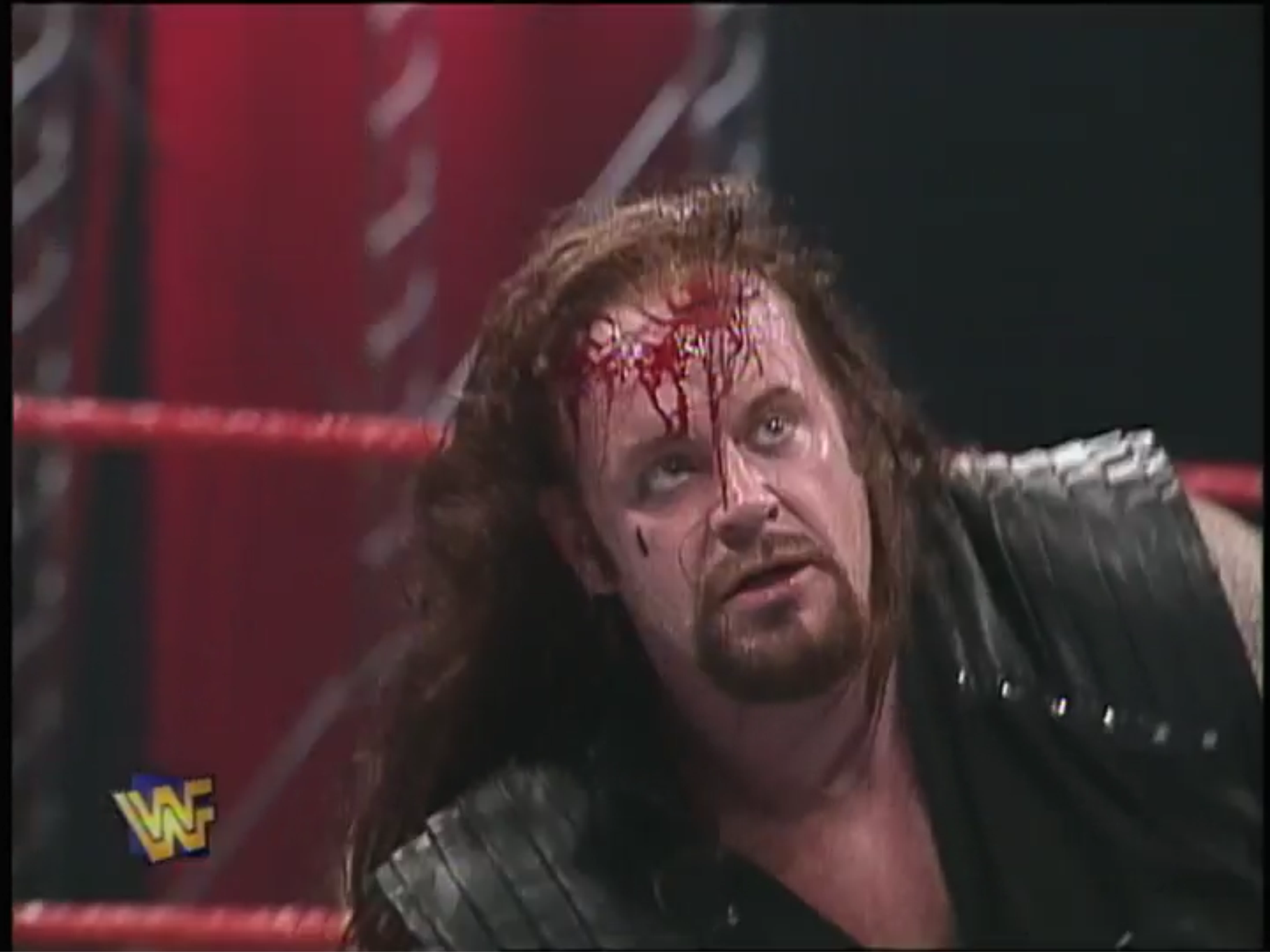 Conclusion: With the US Tennis Open pre-emption imminent, RAW is WAR tried its best to shill the upcoming PPV. The main event did a good job of selling the Michaels-Undertaker match, and the stipulations for the Goldust-Pillman match were set. In addition, the Austin interview brought some much-needed character to the show. Speaking of character, the Rock cut his first heel promo, and it's a doozy. Can all this chocolately goodness help RAW is WAR to defeat Nitro?

Who won? Nope, Nitro won by 0.8 despite rehashing its angles and shiling the upcoming Clash. With the pre-emption of RAW is WAR the next two weeks, Nitro will run unopposed. I wonder if anything worthwhile transpires.