What does Michaels have up his sleeve this week? Who makes an unexpected comeback and will it resonate with the WWF fans? What's next for Pillman? Let's find out!

To begin the show, Ross interviews Michaels who will face Mankind TONIGHT. According to Michaels, he discovered this fact while watching Superstars instead of getting a call from Vince. While the Biloxi faithful chants "Shawn is gay," Michaels retorts with "why don't you ask your sister and your mama how gay Shawn is." Wow! When he addresses Undertaker, he refers to Mankind as "the guy that beat (Undertaker) up."

He then runs down Commissioner Slaughter for stealing his spotlight. Speaking of Slaughter, he comes to the ring and informs Michaels that he doesn't "play games." Michaels then stands on his tip-toes while pantomiming being spat upon in a hilarious comedic bit. Next, Michaels mentions that he requires an "insurance policy," mocks Slaughter, and gives him a crotch chop.

We then see comments from the Biloxi faithful. Afterward, we see Hawk whipping a RAW is WAR steel drum with a leather strap. Bartender, I'll have what he's having.

Prior to his entrance, Henry cuts an angry promo on Hawk. Also, Vince shills the latest issue of WWF Magazine. 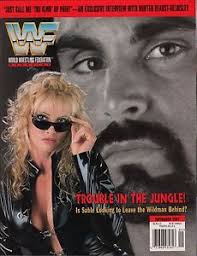 Summary: Convoluted mess that didn't adhere to the stipulation. Unfortunately for WWF fans, this feud MUST CONTINUE.

Get your WWF trading cards sponsored by Stri-Dex.

Slaughter then knocks on PIllman's door and supplies him a dress to wear tonight.

After the match, Slaughter comes to the ring and ejects Goldust and Marlena.

Ross then shills the latest issue of RAW Magazine. 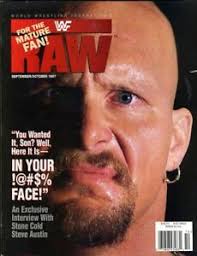 Prior to the next match, we revisit last week's episode when Holly upset PIllman thanks to Goldust and Marlena. 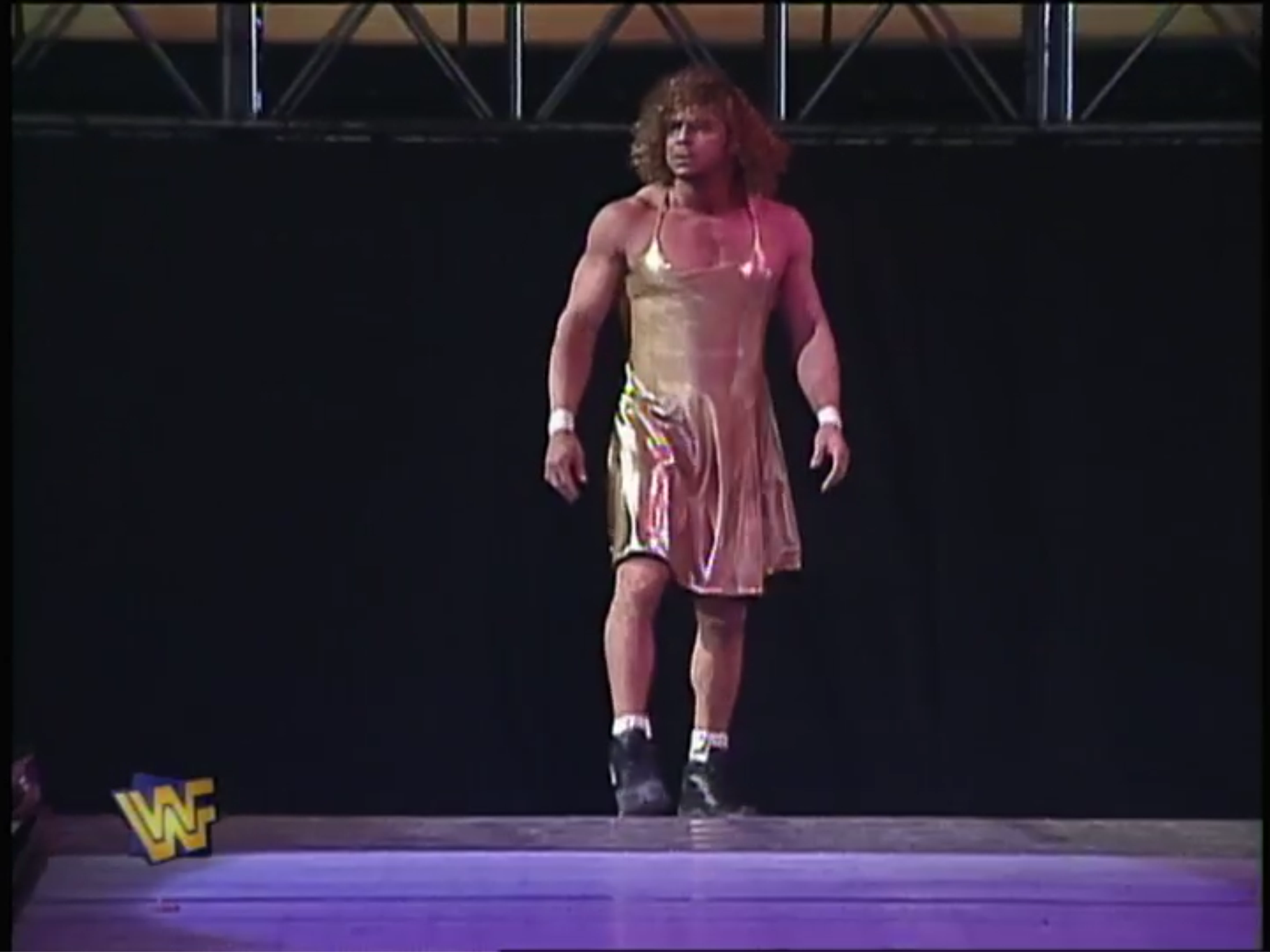 Video featuring the tombstone piledriver that almost paralyzed Austin followed by the roll-up that enabled him to win the IC title. Next, during last week's episode, Austin assisted Dude Love in his victory over Owen.

In the ring, Vince interviews Dude Love who states that Austin is "nursing his wounds" but will return soon. Dude Love then cuts a promo on the three other teams in the Fatal Four-Way at the PPV. As he refers to Michaels as a "would-be-hippie," Dude Love predicts that Mankind will defeat Michaels.

From the Titantron, Michaels threatens Dude Love with his 'insurance policy" and calls him an "idiot." Dude Love then quotes Beatles lyrics, and his groupies chase him from the ring. After putting down the tag team belt, Dude Love changes his mind and dances with them. 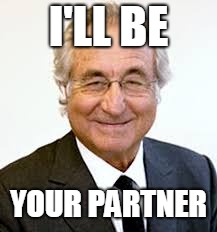 Summary: Good TV match where the Biloxi faithful were completely tuned into it.

Call the WWF hotline to get all the dirt on Ahmed Johnson. Do we really want to get THAT filthy?

Pre-recorded video airs featuring Bret in Canada including comments from the Toronto faithful.

Backstage, Michaels speaks to his "insurance policy" before shooing the cameraman away.

Meanwhile, Patriot cuts a promo backstage on Bret, but Bret attacks him from behind. How dastardly!

Prior to the next match, we revisit last week's episode when the NoD turned on Ahmed.

Match 5: Faarooq (w/o the Nation of Domination) versus Chainz (w/o the Disciples of Apocalypse) 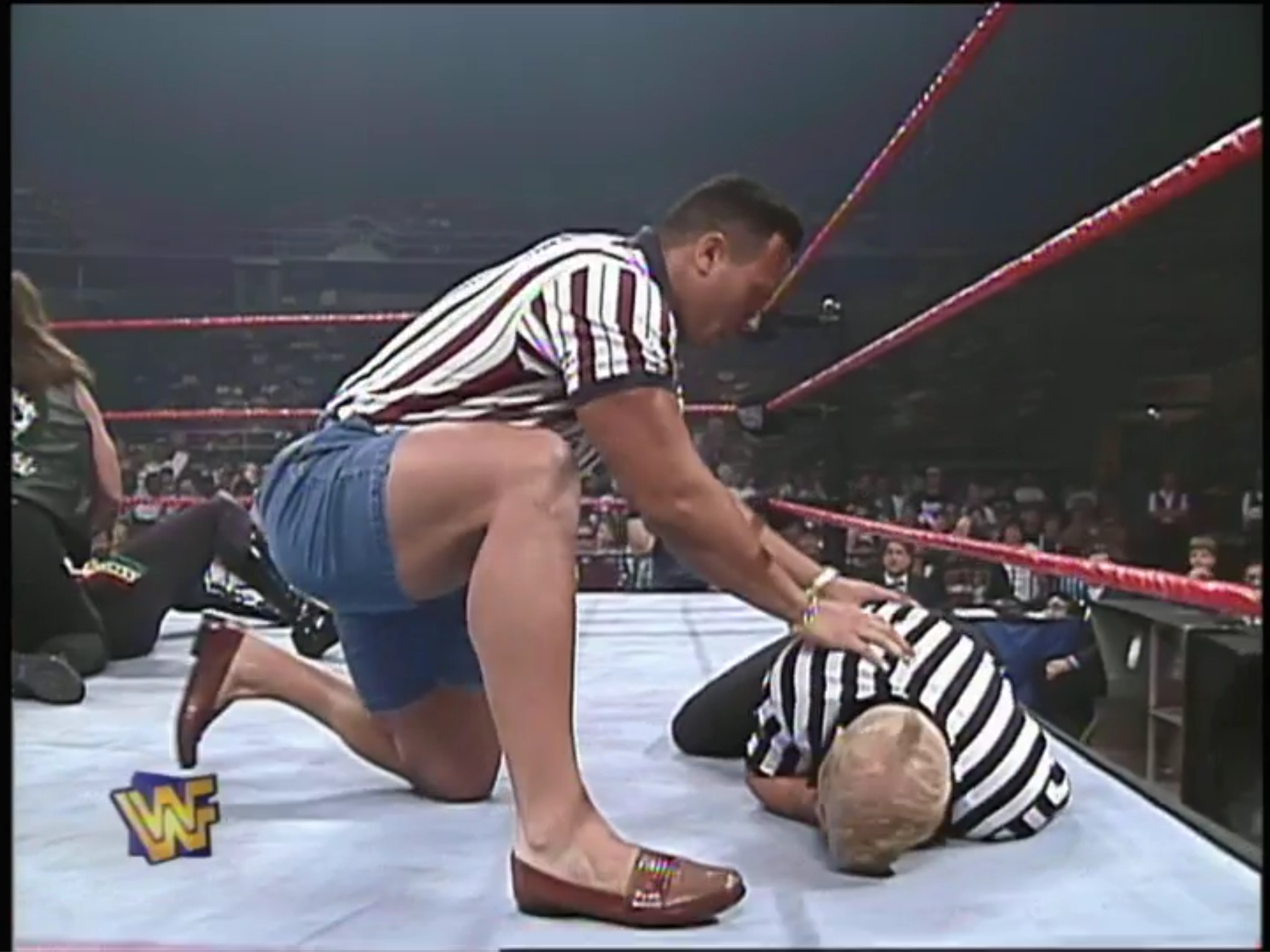 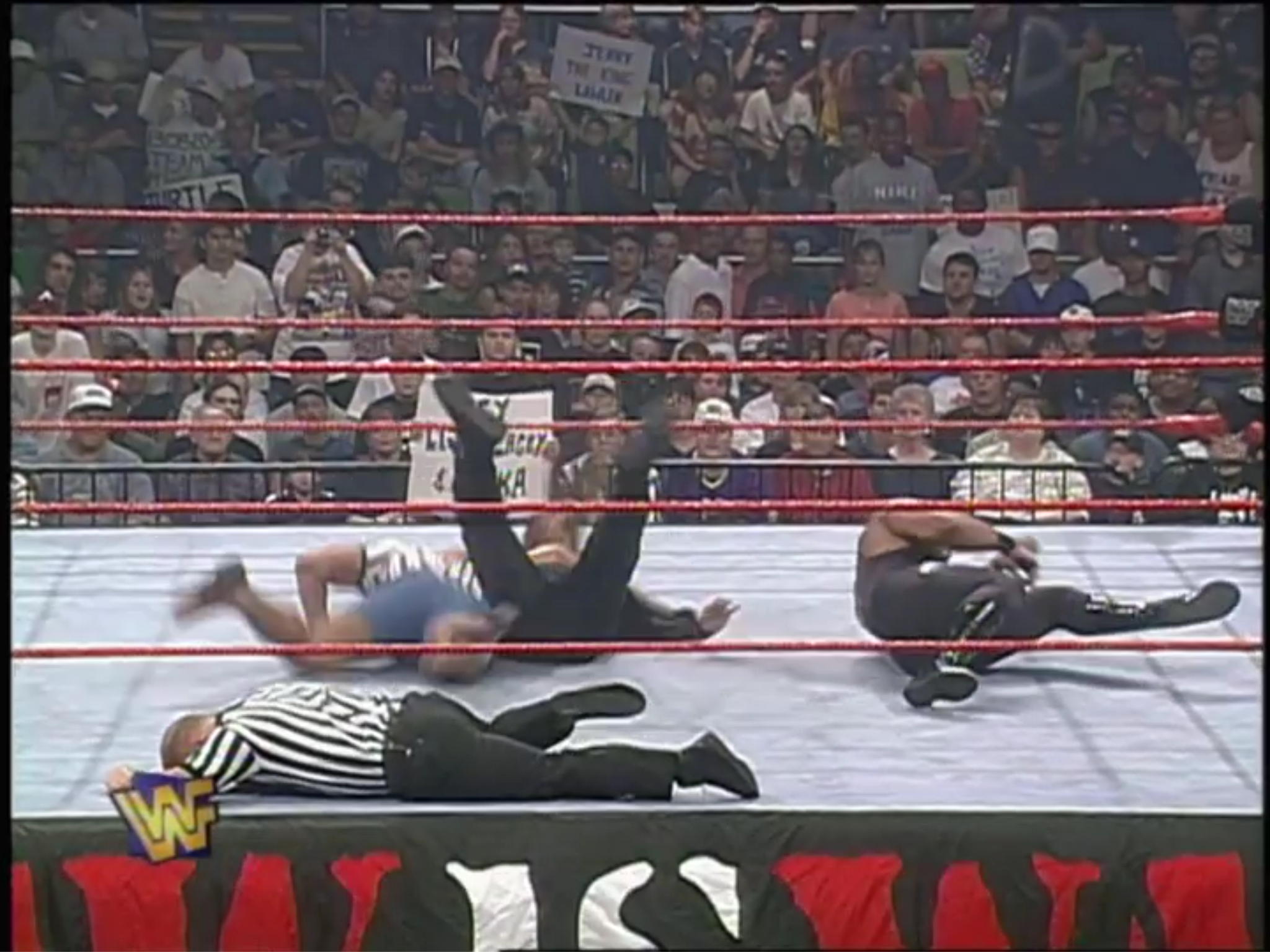 After the match, the Rock shared a salute to the NoD with Faarooq. 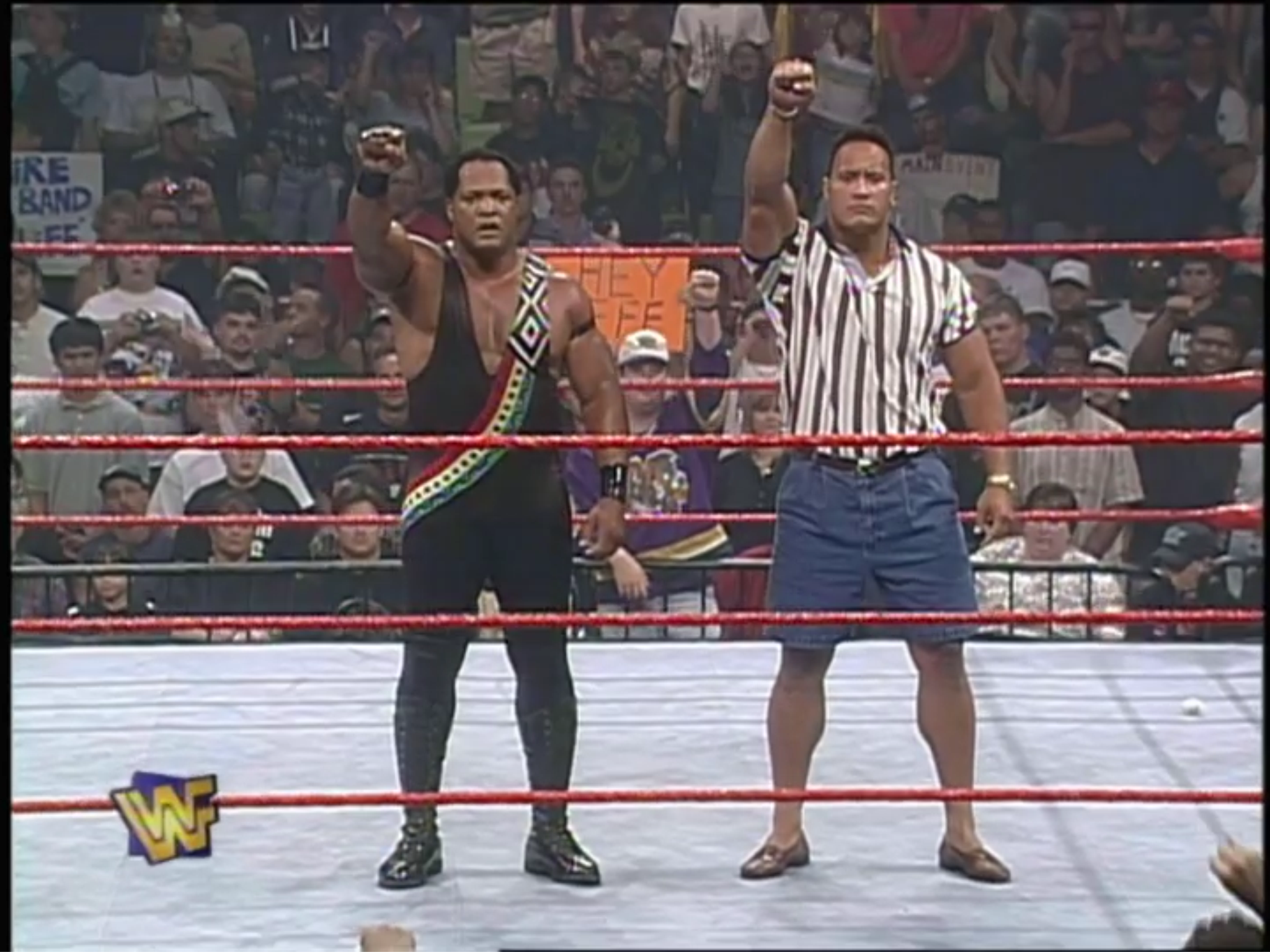 Back in the NoD locker room, the Rock is shown among the other members. Chainz along with the rest of the DoA angrily wield weapons in search of the Rock.

Prior to the next match, Patriot comes to the ring and wants to face Bret RIGHT NOW. Bret complies and emerges with the Canadian flag. As Patriot pummels Bret, the Hart Foundation hits the ring to quadruple-team him. They then lay the Canadian flag across him until officials separate them. While the Biloxi faithful chants "U-S-A," Patriot makes a valiant effort to return to his feet.

Sable made a special appearance for no reason whatsoever. 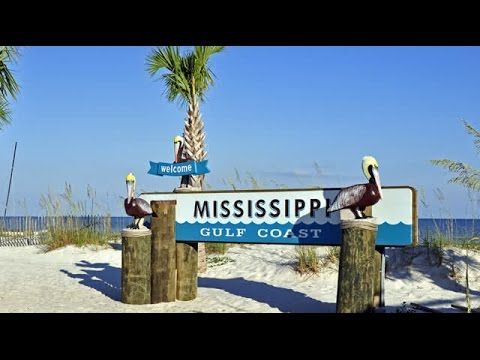 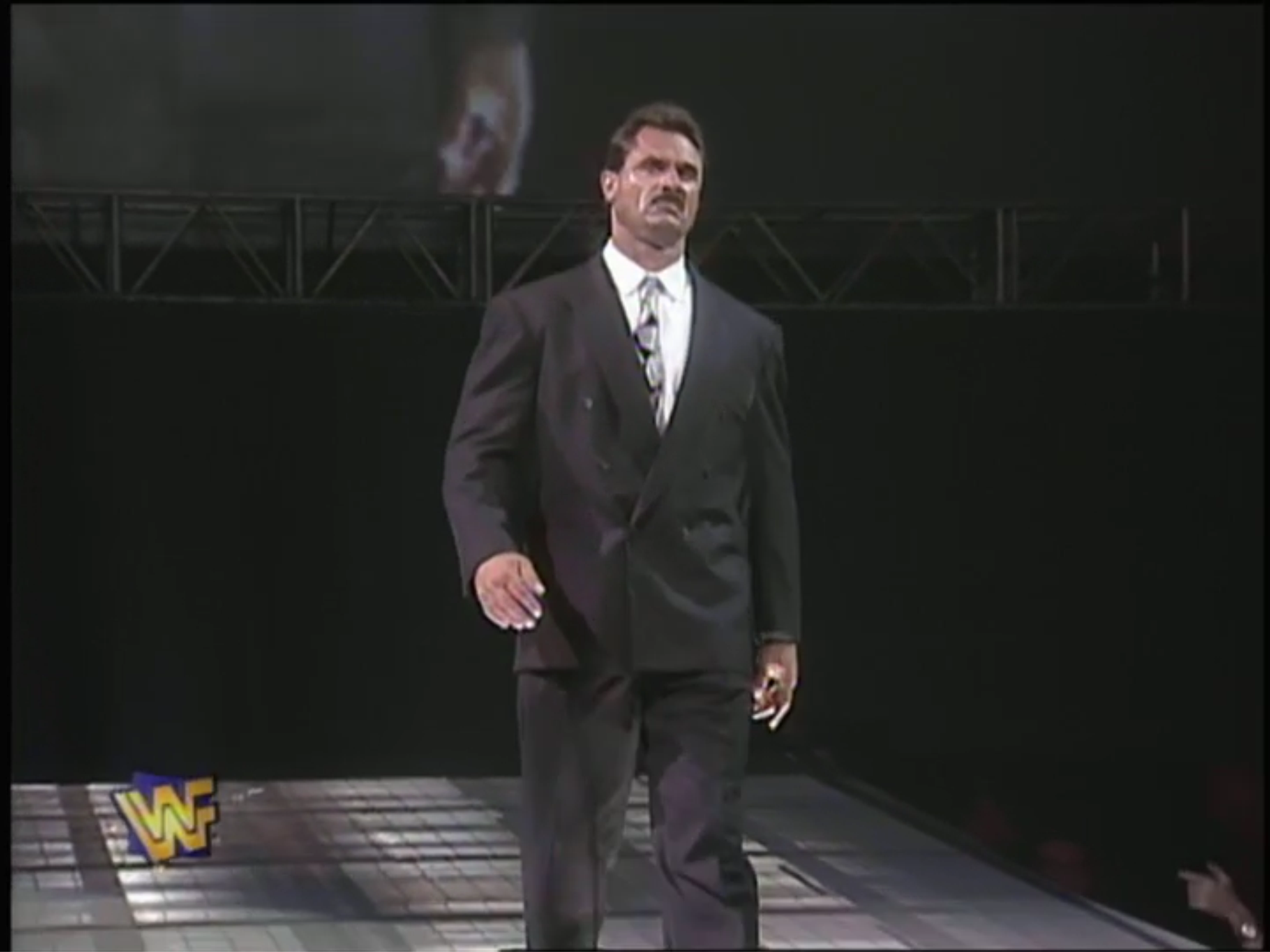 Summary: Not quite as awesome as their match at IYH X: Mind Games, but not far off either. I smell a coup between Michaels, Rude, and Helmsley. 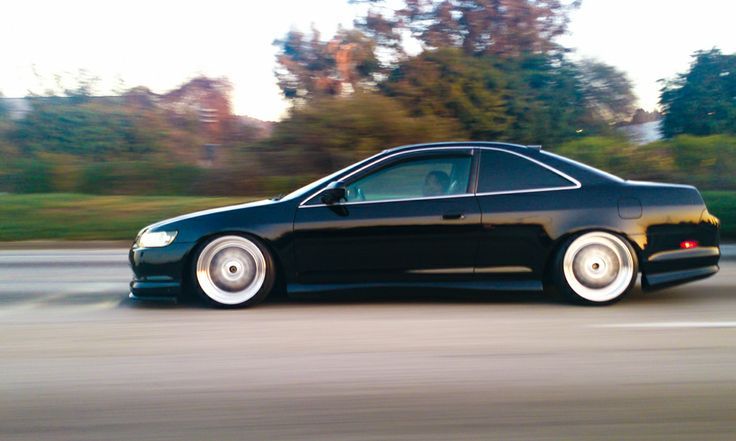 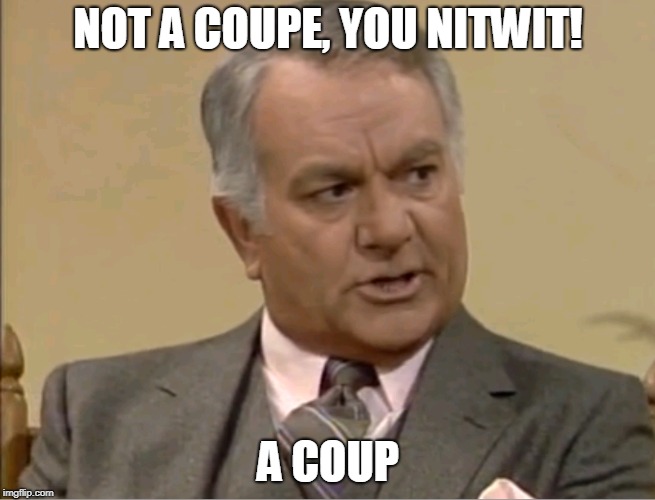 After the match, Undertaker's music hits as he saunters to the ring. Before Undertaker can reach the ring, Bearer shouts on the Titantron warning him of Kane's arrival. Flames then fill the screen to finish the show.

Conclusion: Exciting episode where Michael's "insurance policy" and possible alignment with Helmsley made a tremendous impact in the main event. In addition, the Rock's return may not reverberate much now, but wait until next week. On top of that, the tension between Bret and the Patriot couldn't be cut with a butter knife. While next week's show emanates from Atlantic City, no matches were promoted on this show. Can the episode's content and new time slot propel RAW is WAR to victory?

Who won? Nope, but since Nitro ran from 8-10ish, and RAW is WAR ran from 9-11ish, the wrestling fan was the true winner although Nitro defeated RAW is WAR by 0.9. Neither show has anything planned for next week, but who knows what'll happen.