Can Austin rebound from what happened at Summerslam '97? Who will be Bret's next challenger? Will Pillman actually wear a dress? What's up with Shawn Michaels? Let's find out!

To begin the show, Ross interviews the NEW WWF champion—Bret Hart. We then revisit stills from last night. Alongside the Hart Foundation, Bret infers that he beat the odds last night to become champion. As he accuses Michaels of favoritism, Bret wants him out of the WWF. Ross then informs Bret of his title defense at In Your House XVII: Ground Zero against the Patriot. In his rebuttal, Bret dismisses his challenger.

Next, he touts Smith's victory over Shamrock last night. He then states that Pillman won't wear a dress. Following that, he feels Owen got screwed. Owen then mentions that his mistake was showing compassion which cost him the title. Can't fault his logic. As we see stills of the infamous tombstone, Owen refers to Austin as a "crippled freak" and wants him to forfeit the title.

Ross then introduces the NEW Commissioner of the WWF—Sgt. Slaughter. When Slaughter refutes Bret's statement as the "new sheriff in town," he confirms the WWF title match at the PPV as well as a rematch between Smith and Shamrock sooner rather than later. He then informs Pillman that he will wear a dress or be suspended. Finally, he grants Owen a rematch against Austin pending doctor's approval.

Austin then emerges through the entrance and tosses down his neck brace. When he calls Owen "stupid" and a "loser," he's ready to face Owen TONIGHT. I smell bait-and-switch.

Post-Summerslam comments from the Jersey faithful are shown.

As Vince mentions a triple-threat match at the upcoming PPV, Faarooq cuts a promo on both Vega and Crush.

Prior to the opening match, we revisit the aftermath of the European title match when Shamrock went "berserk" according to Vince.

Summary: While keeping the Shamrock train barreling down the tracks, the feud between NoD and Los Boricuas continues.

After the match, Kama chases after Los Boricuas. 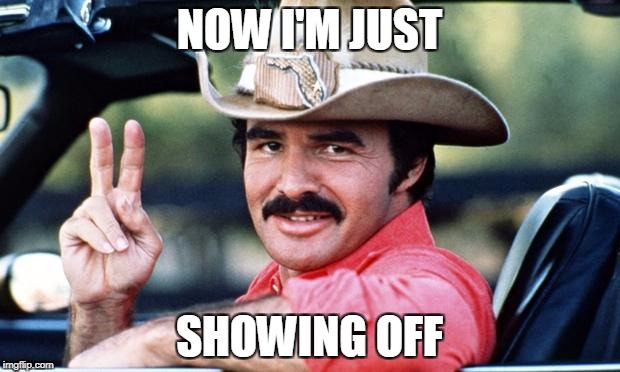 Summary: Good finish to a match where the Bethlehem faithful sought popcorn.

After the match, Lawler argues with referee Jack Doan while Christopher attacks Michinoku. Out of frustration, Christopher catapults him over the top rope to the floor.

Outside Pillman's dressing room, Slaughter delivers the dress to him. He then declares that Pillman will wear a dress on RAW is WAR every week until he wins or face suspension.

Vince then shills IYH XVII: Ground Zero sponsored by Stri-dex. It will be LIVE on PPV on 9/7. Order NOW!

Paul Bearer touts himself as a better manager than Chyna. Well, he's not wrong in that he managed Undertaker when he won the WWF title in 1991.

Summary: The rating is strictly for Chyna's dropkick while the rest of the match stunk up the Stabler Arena.

Patriot then cuts a pre-match promo on Bret and will prove that last week's win wasn't a fluke at the PPV.

Match 4: The Patriot versus the Sultan (w/ the Iron Sheik)

After the match, Bret and the Hart Foundation come to the ring, but Slaughter intercepts Owen and Smith. As Bret recognizes he's without backup, Patriot leaps from the apron to deliver a double axe handle. They then brawl until officials separate them.

In the ring, Vince interviews the "Heartbreak Kid" Shawn Michaels. Upon receiving a mixed reaction from the Bethlehem faithful, Michaels feels like everyone believes Bret's victory is his fault. When Vince asks about Michaels' affiliation with Bret, Michaels calls him the "dumbest son-of-a-bitch (he's) ever met..." Vince then drops the bombshell that is Michaels versus Undertaker at the PPV.

After Vince leaves, Michaels states that Bret "needs" him because he has beaten him already. He then swings his attention toward Undertaker, and the Bethlehem faithful turns on him. In a rather infamous bit, Michaels informs Undertaker that he "lays down for absolutely no one." Twenty-one years later, and I still can't believe he said that. When the jeers rain down upon him, Michaels angrily finishes his promo on Undertaker.

As the gong hits and the arena darkens, Undertaker emerges through the entrance. While Michaels is nowhere to be seen, Vince interviews Undertaker who informs Michaels that he'll "rest in peace."

Abruptly, Bearer interrupts from the Titantron and calls Undertaker a murderer again. He then vehemently promises that Kane's coming.

Match 5: Ahmed Johnson (w/ the Nation of Domination) versus Chainz (w/ the DoA)

After the match, the DoA returns to chase off los Boricuas. The NoD also returns but attacks Johnson. WE HAVE A FACE TURN! As they triple-team Johnson, Faarooq whips him, and D'Lo Brown mounts the top turnbuckle to frog-splash him. As I mentioned in my Summerslam '97 reflection, Johnson injured himself last night so this writes him off until he recovers.

Match 6: The Headbangers versus the Godwinns

Summary: Along with the Bethlehem faithful, I couldn't care less about this match. Next!

Goldust and Marlena emerge through the entrance to sit in the front row for Pillman's match. When Michael Cole interviews them, they're excited to see Pillman humiliated. 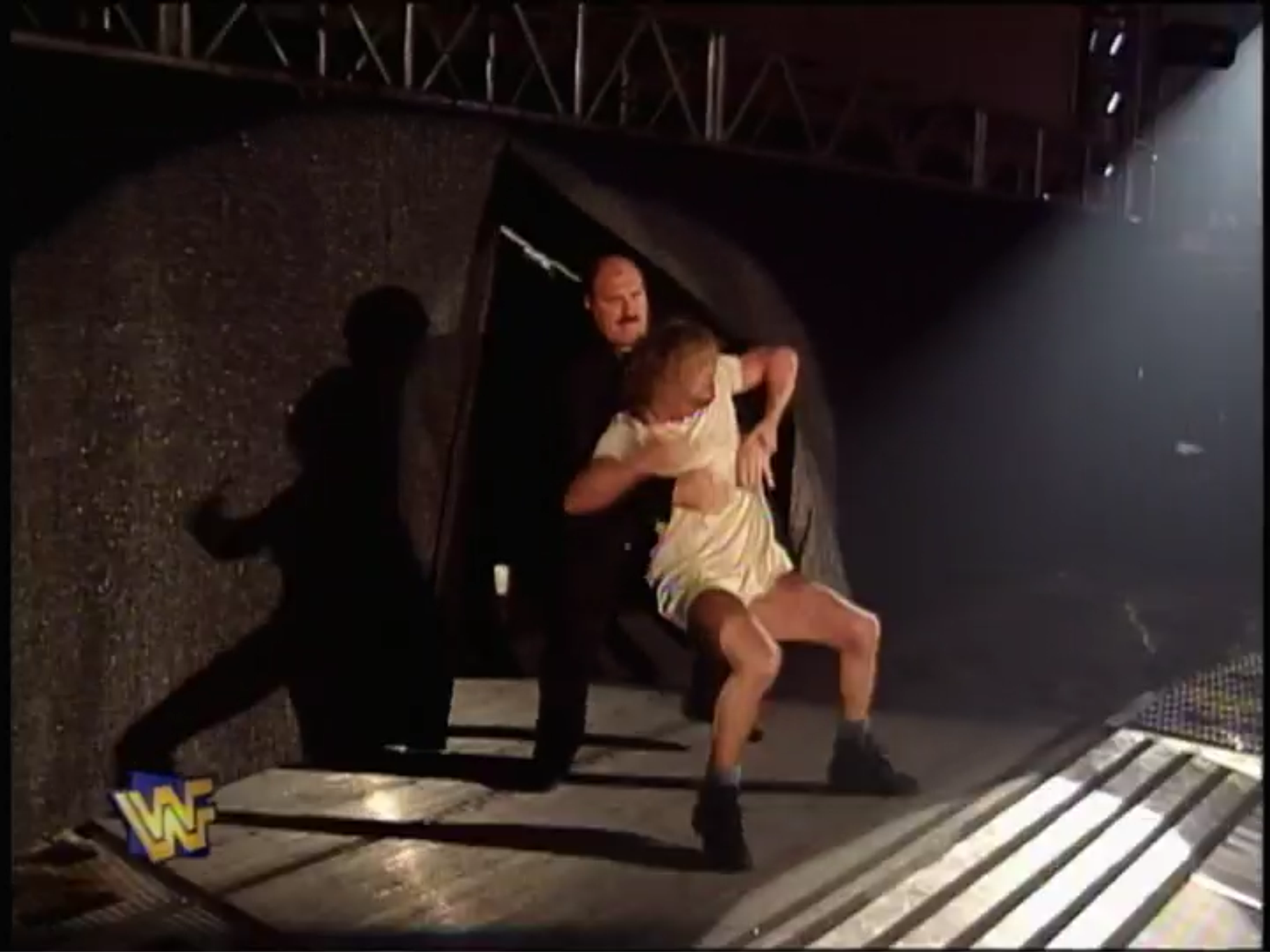 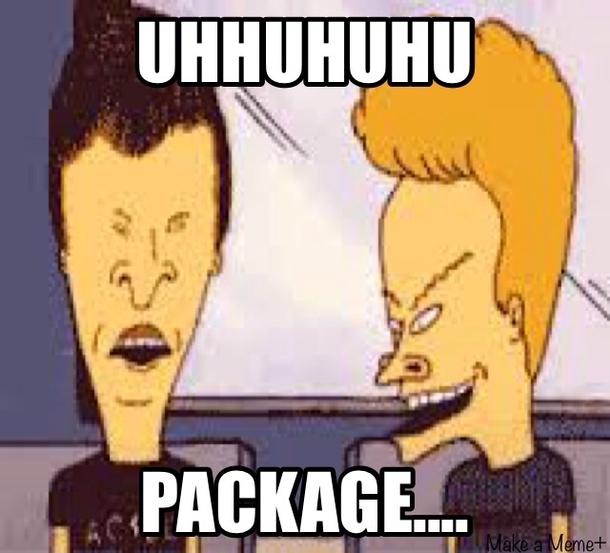 Summary: More shenanigans than anything worthwhile.

After the match, Dude Love and his groupies danced in celebration.

Conclusion: Without question, this was an extremely skippable episode. There was ZERO reason whatsoever to change the channel from Nitro to this. It would appear that the WWF just laid down this week knowing WCW would kick its ass.

Who won? 4.4 to 2.6 = butt whoopin' time! Nitro's streak continues as its first three-hour show DEMOLISHED RAW is WAR by 1.8. Next week, Nitro has the fallout from Road Wild '97 while RAW is WAR contains a couple of surprises.