Can Austin and Dude Love retain the WWF tag titles against the Godwinns? Who will face Bret in the main event? How does Shawn Michaels factor into it? Let's find out!

In case you missed last week's episode, a LONG video package recaps it.

To open the show, Ross interviews the Hart Foundation. He then describes the possibility of sanctions imposed against Bret due to his actions last week. As Ross mentions that a new commissioner will be named next week, Bret's case will be re-evaluated at that time.

While the Pittsburgh faithful chants "U-S-A," Bret name-drops O.J. Simpson with respect to the lack of justice in America. Also, Bret tries to retract his stipulation for the WWF title match at the PPV and discredits Michaels. He then notes that he will become WWF champion for the fifth time. Afterward, he informs Michaels that he needs to apologize for demeaning Canadians last week. 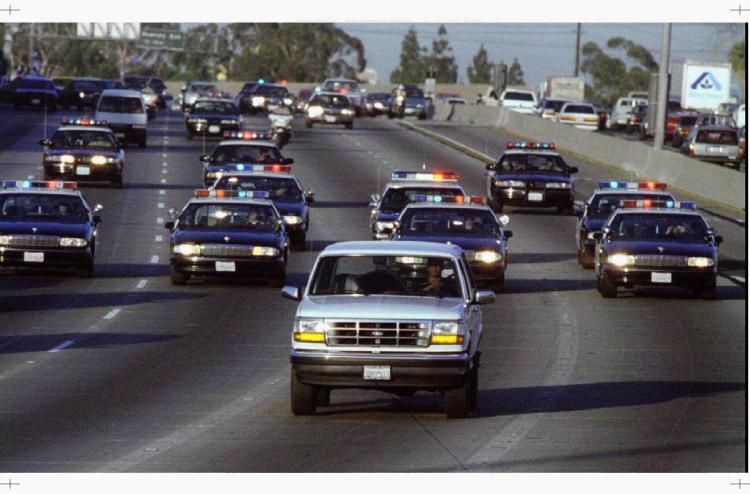 Next, Bret recalls his statement from last week about America being a "big, giant toilet bowl." He then adds that if America was given an enema, the hose would be placed in Pittsburgh. Wow! Finally, he cuts a promo on and challenges the Patriot while the Pittsburgh faithful show their hometown pride. 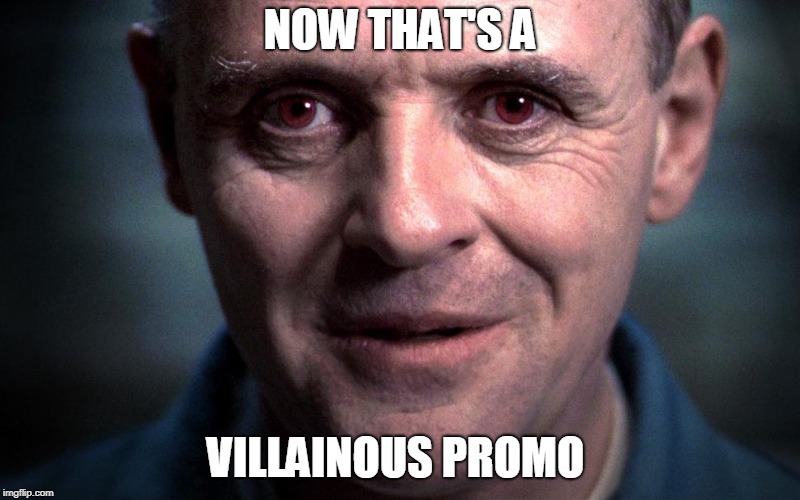 We then get pre-recorded comments from the Pittsburgh faithful about the PPV main event.

Prior to the opening match, Los Boricuas cut a promo from the locker room. We also get the ambush by the Godwinns on the Road Warriors from two weeks ago.

After the match, the Godwinns join the fray to make it 6-on-2 against the Road Warriors. Henry then delivers a Slop Drop to Hawk on the floor. How dastardly! Furthermore, he adds insult to injury by pouring slop on Hawk. YUCK! Vince then shills the upcoming Godwinns/Road Warriors match at the PPV.

Vince then shills RAW is WAR's NEW time slot next week at 8:57pm ET. I wonder how Nitro will counter-program against it.

We then revisit Shotgun Saturday Night from 5/10 when Chyna got involved in Helmsley's match against Mankind. Next, we revisit King of the Ring '97 when Helmsley used the Pedigree to Mankind on the broadcast table. Following that, we revisit IYH XVI: Canadian Stampede when Helmsley and Mankind fought their way outside of the Calgary Saddledome. Helmsley then cuts a promo on Mankind about their steel cage match at the PPV and infers that Vader is F-A-T with a "Jenny Craig" comment. 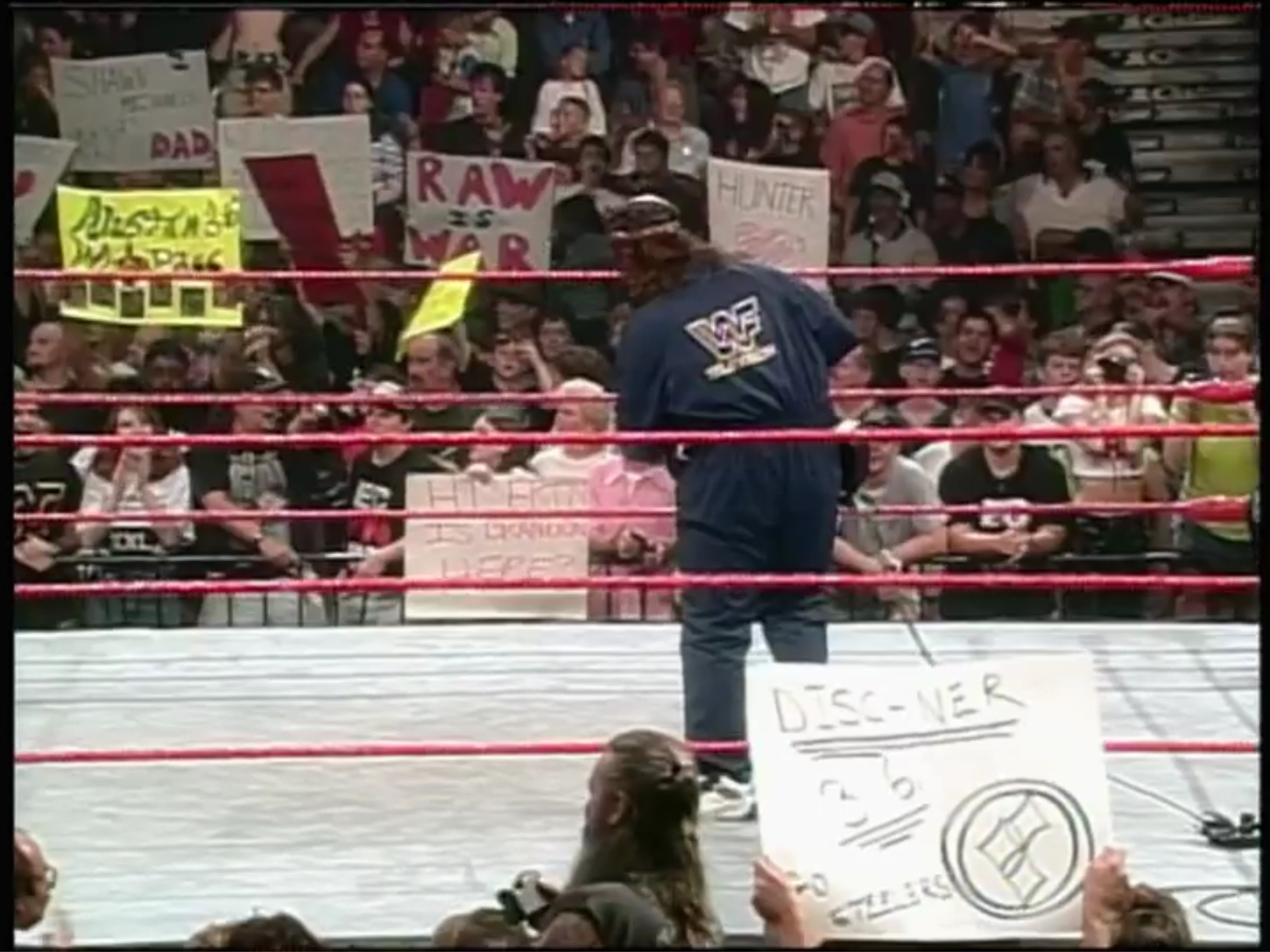 We then get a vignette for Brakkus. Pass the wienerschnitzel! 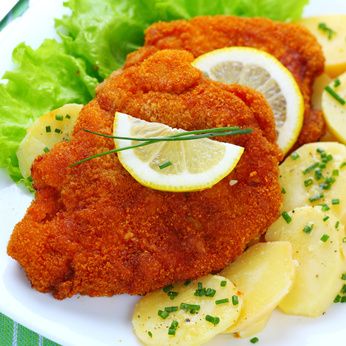 Summary: Terrible debut for a group of wrestlers that caused the Pittsburgh faithful to seek popcorn.

Vince then calls Ryan Shattuck from Liverpool, NY who accepts a trip to Summerslam '97. I hope he gets his parents' permission.

Match 4: Faarooq (w/ the Nation of Domination) versus Crush (w/ the Disciples of Apocalypse)

Summary: Mere fodder for the upcoming eight-man tag match at the PPV.

After the match, Los Boricuas hit the ring and quadruple-powerbomb Crush on the steel ramp. OUCH!

More comments from the Pittsburgh faithful regarding the PPV main event air.

Summary: The pop for Austin grows stronger by the week as his date with Owen at the PPV looms.

After the match, Austin grabs and throws Owen down to the floor. Pandemonium explodes as Smith, Dude Love, and the Godwinns join the fray. The Road Warriors also join the melee while the Godwinns escape up the ramp. To finish the segment, Austin commandeers Vince's headset and cuts a promo on Owen.

RAW is WAR is sponsored by the US Army and FootAction USA.

Prior to the next match, Shamrock brings a folding table to ringside.

Summary: 100% worthless match as neither competitor made a serious dent in the WWF.

Vince then tries to call another lucky winner, but a pre-recorded message about bad weather in the area prevents a successful connection. While Sunny runs her fingers through some serious cash, Vince calls another number, and Patrick Stevenson wins a trip to Summerslam '97. 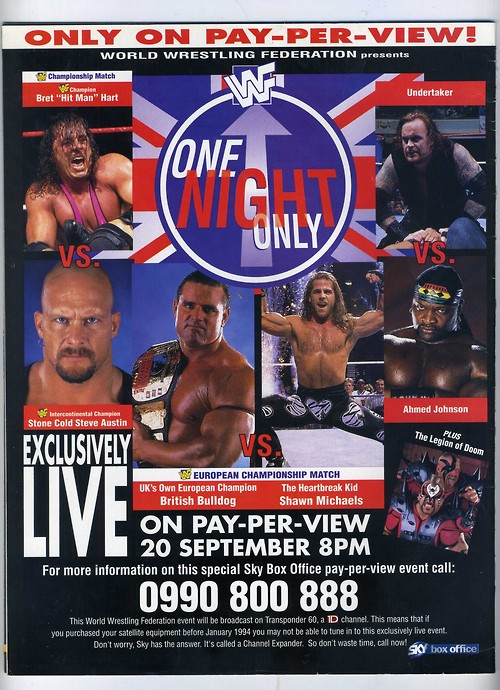 For the second time, Vince reminds us to tune in one hour later as RAW is WAR begins at 8:57pm ET next week.

Summary: Just an excuse to use Moorer for a one-shot deal.

After the match, PIllman hits the ring and gives Goldust a DDT. He then grabs the mannequin and shoves it in Goldust's face. Next, he takes the dress and tries to push it down Goldust's throat. Marlena then jumps on Pillman's back until officials separate them.

Vince then shills Summerslam '97 LIVE on PPV this Sunday on PPV. Order NOW!

In the ring, Vince interviews the "Heartbreak Kid" Shawn Michaels who doesn't apologize for anything whatsoever. He then promises to perform color commentary during the man event.

Summary: Best match of the night while the strife between Bret and Michaels continues.

Conclusion: Are you ready for Summerslam '97? The WWF hopes so, because they shilled both the PPV and its matchups throughout the program. The tension between Bret and Michaels has reached a boiling point. I wonder what'll happen at the PPV?

The camera operator impersonation by Mankind was genius, but it did feel somewhat copycat-like after the DDP swerve on Nitro. With the exception of the main event, the wrestling was either terrible or meaningless. Can the WWF squeak out a victory this week or does WCW's dominance continue?

Who won? As you can see, the numbers were close throughout the shows, but Nitro eked out a victory 3.4 to 2.9. While Nitro promises a hot show with Luger versus Hogan for the title, RAW is WAR will contain the aftermath from the PPV. Both shows have potential to be great. Let's see what happens.