Who will be Austin's tag team partner in the title match? Why is Shawn Michaels here? Who else makes an appearance? Let's find out!

To begin the show, the Hart Foundation hits the ring to a chorus of boos. What a difference a week makes! Vince then interviews Bret who claims San Antonio is "filled with rats." That'll help his chances after the show. Regardless, his "won't wrestle again in the US if he doesn't win the WWF title" clause is cemented. Bret then cuts a promo on Undertaker.

While Owen's ready to regain the WWF tag titles tonight, he tells Austin to "pucker up" for Summerslam '97. Smith then claims that if he loses the European title, he will eat a can of dog food. Next, Pillman calls out the "American Dream" Dusty Rhodes regarding his son and states that if he loses, he'll wear a dress on the following episode of RAW is WAR. Also, he makes a dirty remark toward Marlena. Finally, Neidhart states that if any of the Harts lose, he'll shave his goatee off.

When Bret declares a "Canadian summer," Austin emerges through the curtain. Alongside him, Ken Shamrock comes out. Afterward, the Patriot makes his WWF debut. Sycho Sid then emerges in street clothes. Finally, Shawn Michaels returns to RAW is WAR after a five-week hiatus. This was Sid's last WWF appearance for fifteen years. My sincerest condolences to the Sid fans out there.

Prior to the opening match, we revisit RAW is WAR from two weeks ago when Lawler helped his son defeat and humiliate Scott Putski.

Summary: If nothing else, this was Ivan Putski's final wrestling match.

We then revisit last week's episode when Helmsley WALLOPED Mankind with a chair to the head, but Mankind shared a hug with Austin. He then threatens Austin with a surprise this week.

The Stri-dex Triple-Action segment is a moonsault from Flash Funk to Owen on Shotgun Saturday Night. Next, Owen hit a spinning heel kick. Finally, Owen hooked the Sharpshooter for the win.

Bearer then informs Undertaker that Kane is alive and will prove it next week.

Prior to the next match, we see highlights of Michinoku against Sasuke. 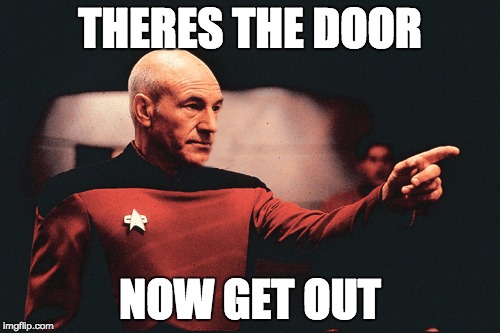 Summary: Showcase match for Michinoku, but this was an impressive debut for Tajiri.

Backstage, Shamrock states that he's not Austin's partner but will face Neidhart later.

Earlier today, Los Boricuas pulled up in a low-rider with two women.

Promo for the August issue of WWF Magazine airs featuring an article on Pillman. 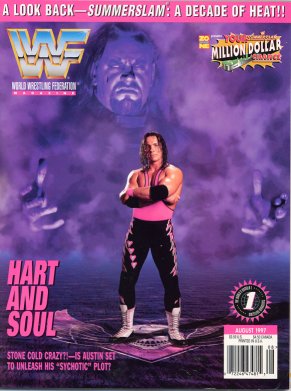 Prior to the next match, we revisit last week's show when 8-Ball and Skull almost decapitated José with a guillotine upon a motorcycle.

Summary: Waste of time because neither team is over, and the San Antonio faithful couldn't care less.

After the match, Los Boricuas quadruple-team the Headbangers until DOA rides to the ring on their motorcycles. An all-out brawl ensues as DOA clears the ring.

We then revisit Royal Rumble '97 when Michaels regained the WWF title.

In the ring, Vince interviews Michaels who also denies being Austin's partner. While he claims to be less than 100%, Michaels is "good enough to go right now." He then revels in Bret's possible opportunity to leave America and infers that Vince needs to decide to include Michaels at Summerslam '97. Next, he begs to participate in the PPV with practically any role possible. Before the segment ends, Michaels tries to remove his shorts, but Vince covers him up.

Savio Vega has a microphone, motions a cameraman to join him backstage, and claims there has been an accident. When the camera finally gets there, Jesús trashes one of the DOA's motorcycles. Suddenly, the DOA show up to brawl with Los Boricuas. While the most annoying car alarm in history sounds, officials break up the melee. Los Boricuas then drive away dragging the trashed motorcycle, so Skull and 8-Ball follow them.

After a commercial break, Crush assists Chainz and vows revenge.

After the match, Smith hits the ring, and he and Neidhart double-team Shamrock. As they double-guillotine Shamrock with the top rope, the heels deliver a spike piledriver. How dastardly! Suddenly, the Patriot hits the ring and gives each heel a full nelson slam.

For the second time, Mankind remains stoic in the boiler room.

We then revisit the chair shot from Helmsley to Mankind from last week again followed by Austin's character improvement work and Mankind's tease for this week.

Ross then shills the Summerslam $1 million-dollar chance. Since last week's clue was edited from the WWE Network, Vince reveals it this week to be 2-A. The third clue is LIFE provided by Wink Collins and the Headbangers. Stay tuned for next week's clue to submit your entry to win.

Match 5: The Road Warriors versus the New Blackjacks

The Discovery Zone Rewind is Michaels' pleading for a spot at Summerslam '97.

After the match, Vader mounts the second turnbuckle and gives Funk a Vader bomb.

Backstage, Austin doesn't care who his partner is and promises to regain the tag titles.

RAW is WAR is sponsored by the Baby Ruth.

Not THAT Baby Ruth! 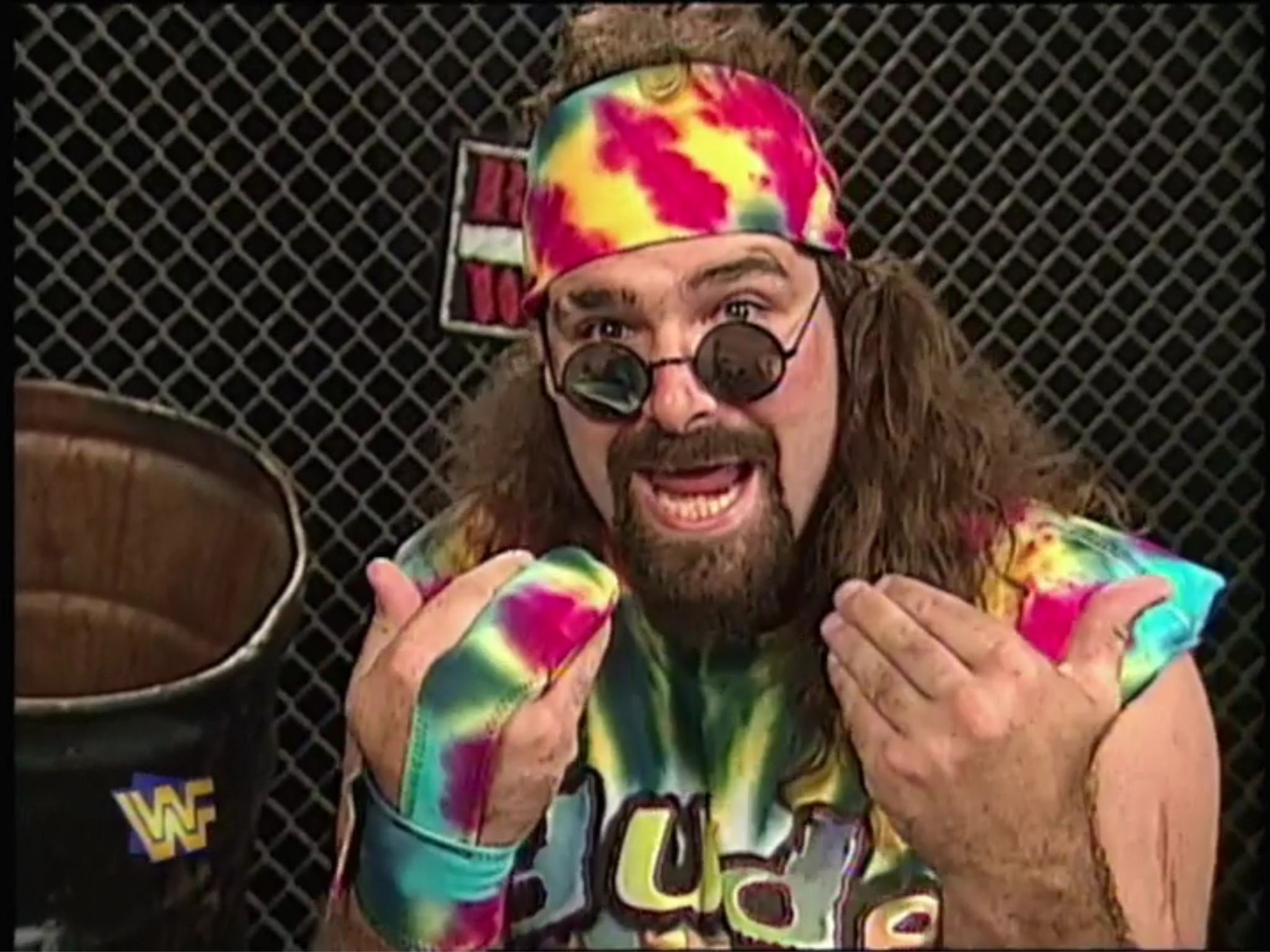 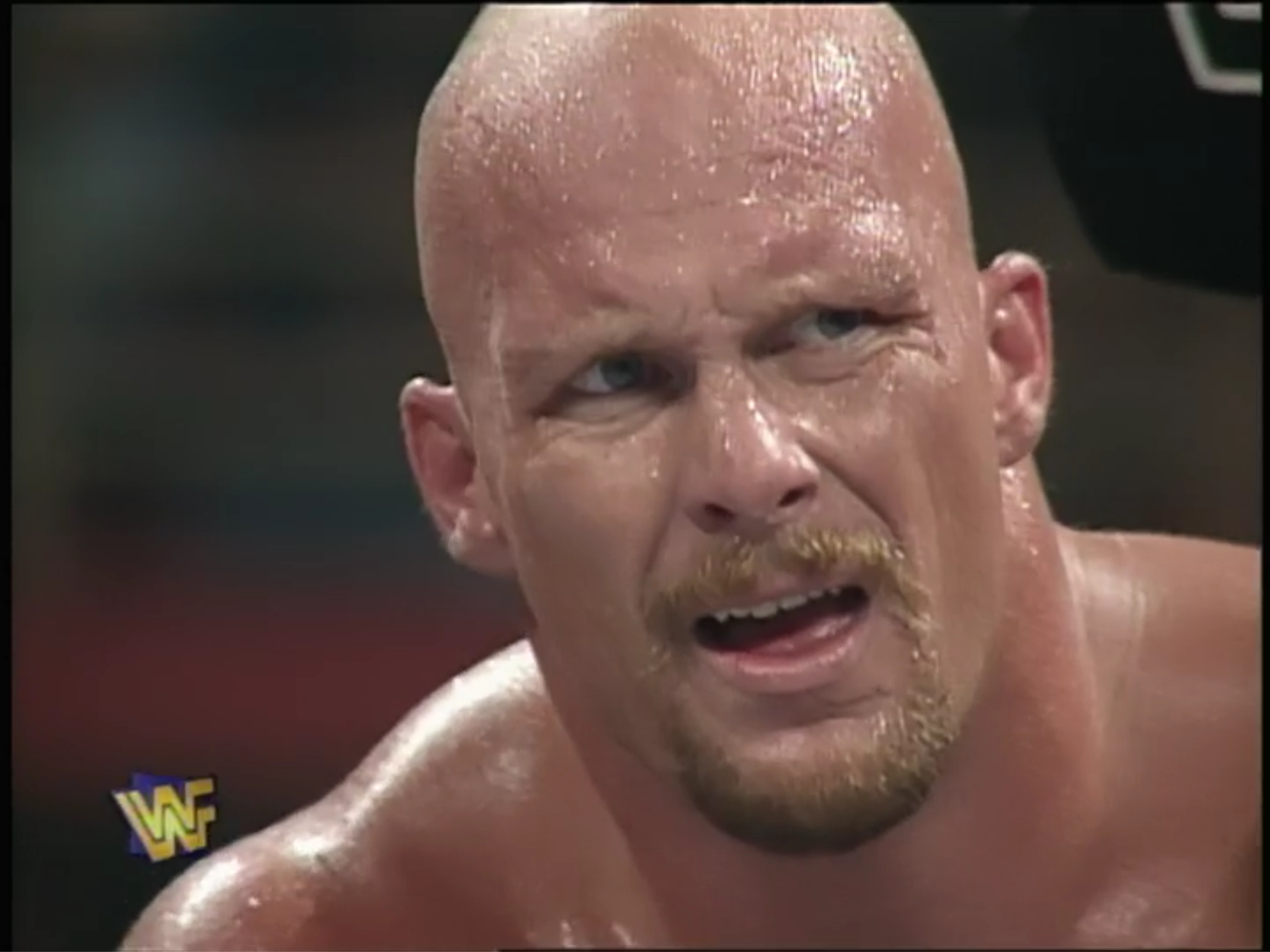 Summary: With Michaels still not 100%, Foley introduced Dude Love as an alternative to Mankind for Austin to regain the tag titles. Since Dude Love isn't a one-and-done character, this match has historical value and is the match of the night. 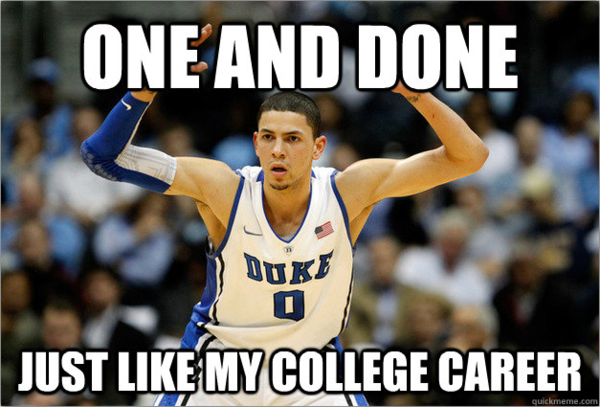 After the match, Dude Love gives Austin his championship belt while a pair of Dude Love groupies celebrate with the newly-formed character. As a sign of gratitude, Austin returns the belt to Dude Love and shakes his hand. The groupies and Dude Love then dance to finish the show.

Conclusion: It's the Dude Love episode, folks. If you watch nothing else from this episode, catch the main event. The bulk of the remainder of the show was meant to shill Summerslam '97. Did it help to beat Nitro?

Who won? Nope, Nitro won 3.5 to 2.6. I believe the fallout and mainstream attention from Bash at the Beach '97 earned Nitro the victory this week. Next week, both shows run unopposed. Get out the wheelbarrow for them.