Johnson makes his NoD debut while the winners of the quarterfinals of the tag team tournament are finalized. Also, the very first triple-threat match on RAW is WAR occurs. Read on!

To begin the show, Vince interviews the Nation of Domination in the ring. When Vince asks why he joined the NoD, Johnson calls him "white man." He also has lost respect for Undertaker due to Bearer's influence. When Faarooq gets his turn, he continues to stir the racism pot. Brown then touts the NoD as "dominant." Proudly, Kama proclaims his victory over Undertaker last week.

Suddenly, a group of bikers led by Crush hit the ring on Harley-Davidsons. He introduces the DoA—Disciples of Apocalypse. The groups then brawl with one another until officials separate them. During the melee, Johnson supposedly blows out his knee according to Meltzer. That will keep him from facing Undertaker at IYH XVI.

Backstage, the Road Warriors cut a quick promo on the Godwinns.

RAW is WAR is sponsored by Wrigley's Winterfresh gum and 1-800-COLLECT.

We then revisit last week's episode when Shamrock challenged Austin, and the Hart Foundation's challengers for the PPV were established.

The Army Slam of the Week is Johnson's heel turn during last week's episode as he delivered the Pearl River Plunge to Undertaker.

After the show in Anaheim this Saturday gets hyped, a revealing video featuring Sable airs. Try to keep your tongues in your mouth, gentlemen. We then see segments from the previous two weeks about Marc Mero's removing Sable from the spotlight while Ross plugs a Vince Russo article in WWF Magazine. 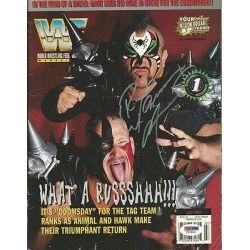 We then revisit Shotgun Saturday Night from two months ago when the Road Warriors inadvertently broke Henry's neck.

Next, we get the bracket for the tag team tournament. 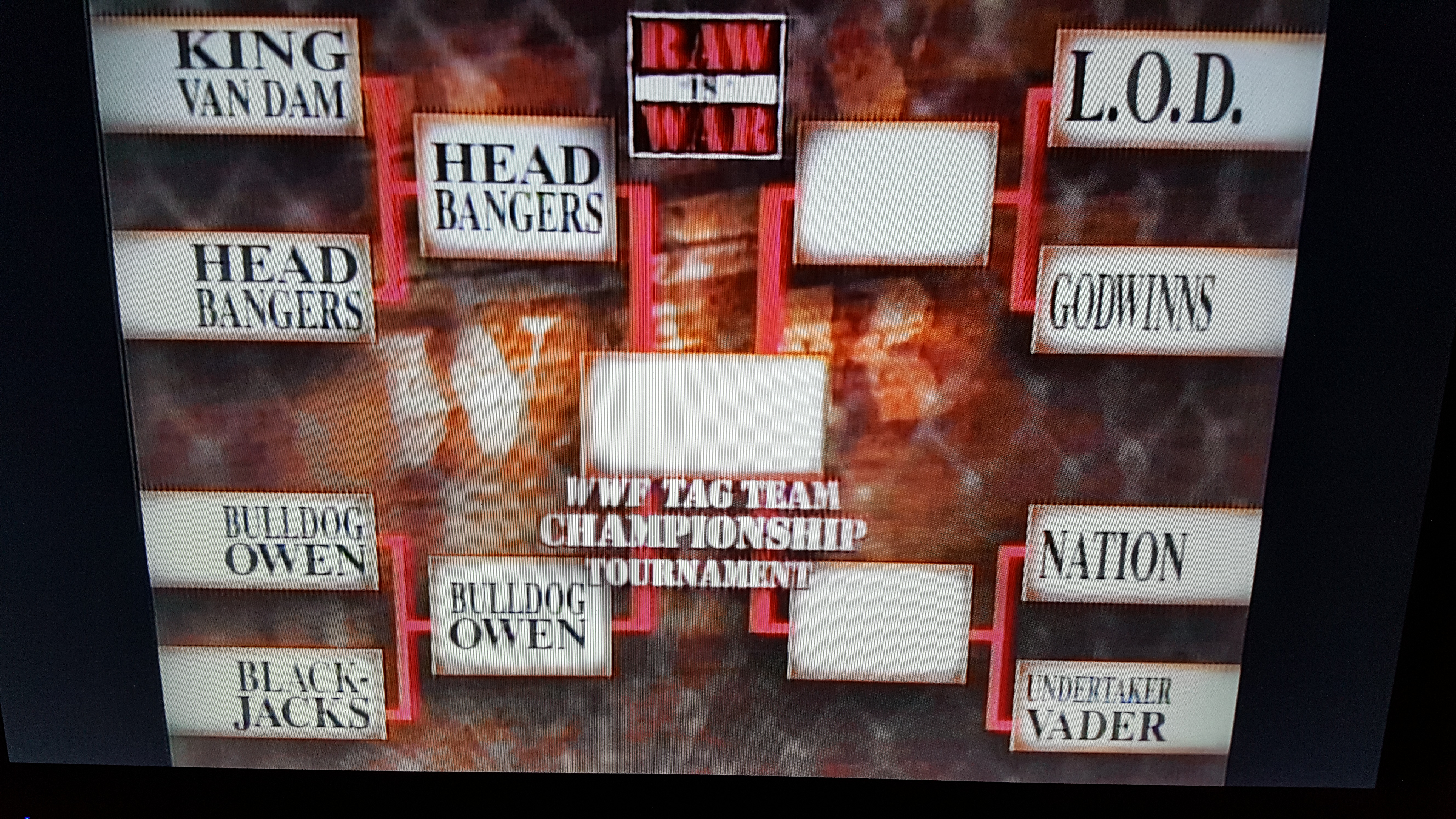 Match 2 for the WWF tag team titles (quarterfinal): The Road Warriors versus the Godwinns

After the match, Phineas nails Hawk with the slop bucket while Henry clotheslines Animal over the top rope to the floor. Henry then gives Hawk a Slop Drop before Animal returns with a chair to chase them off. Suddenly, the Hart Foundation hits the ring to attack the Road Warriors. In the meantime, Bret stands at the entrance observing the carnage.

Seated in the front row is boxer Thomas "Hitman" Hearns. More on this later. 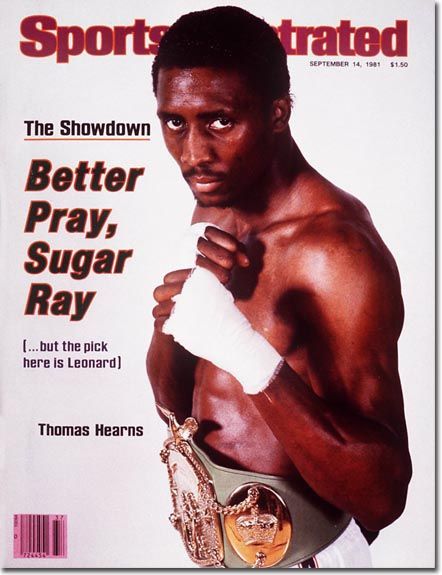 Back in the locker room, Bearer shouts at Undertaker, but Undertaker grabs both Bearer and Vader by the throat. Bearer then screams "the fire" causing Undertaker to walk away.

After a commercial break, Owen's disgusted about the upcoming triple threat match.

Promo for 'Cause Stone Cold Said So airs.

In a pre-taped segment, Funk cuts a promo on Sabu.

Courtesy of Uncle Paul, a highlight reel of Sabu airs during his entrance.

After the match, Sabu hits a leg drop on Funk causing the table to break.

We then revisit last week's episode when Mankind requested to be Austin's partner.

Promo #2 for 'Cause Stone Cold Said So airs.

Summary: What was the purpose of this? I see none whatsoever.

Um, Helmsley, aren't you on the booking committee?

Ross then shills the WWF calendar:

Backstage, Owen complains to WWF President Gorilla Monsoon about not having a second; thus, he requests Pillman to join him. The funny part about this segment was although Monsoon agreed, Owen continued to argue. HA!

Summary: Good experiment for the WWF as it was non-stop action.

After a commercial break, Vince interviews Bret with Neidhart in the ring. As Bret touts Neidhart and himself "the greatest tag team in the World Wrestling Federation" to spite the Road Warriors, he runs down Shamrock and Goldust. He then refers to Austin as the "scum of the earth."

Following that, he turns his attention to Hearns. When Bret informs him that "there's only room for one hitman" while referring to himself, he challenges Hearns. Bret then calls Hearns "the chicken man," so Hearns storms the ring to stand up for himself. Before he and Bret tangle, Hearns nails Neidhart. Hearns' bodyguard then steps in to prevent any further chaos. The Detroit faithful then chant "U-S-A" to provoke the Hart Foundation.

Back in the locker room, the new Nation of Domination begins a promo until Savio Vega interrupts. When Vega tries to nail Faarooq, Brown and Kama double-team him. Faarooq then joins the fray by whipping Vega repeatedly.

In a pre-recorded interview, Christopher touts himself as the "most exciting athlete on the face of the earth." He then coins his nickname "Too Sexy."

Summary: Showcase match for Christopher yet the Detroit faithful hit the concession stands for popcorn.

Promo #3 for 'Cause Stone Cold Said So airs.

Prior to the main event, Bearer swears that "everything is A-OK." 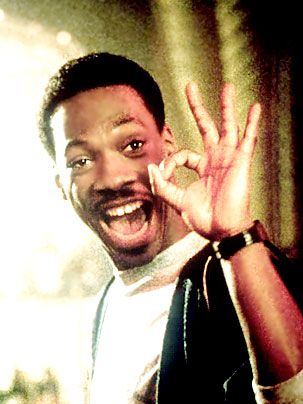 Summary: Dysfunctional tag teams, a Vince Russo staple, tend to combust. This time, it happened within one match.

After the match, Undertaker reverses an Irish whip and gives Vader the big boot. He then follows with the tombstone. Bearer then makes a hasty exit but returns when Undertaker heads up the ramp. As he grabs the microphone, he threatens Undertaker with an exposing announcement next week. Undertaker then gives the hand gesture that he'll destroy Bearer.

Conclusion: Other than Johnson's NoD debut becoming one of the worst heel turns ever, this show was extremely skippable.

Who won? Once again, Nitro beat RAW is WAR. This time by a margin of 0.8. Considering WCW's hype of their "impact player" next week, the WWF should be running scared of their next rating. Who knows what'll happen.