What does the Hart Foundation have up its sleeve for Austin this week? Read on!

To begin the show, we revisit the Bret-Austin street fight, Austin’s subsequent shenanigans, and Pillman’s revenge from last week.

Pillman comes to the ring and claims to be religious. As the Omaha faithful boos him, Pillman wants to lead everyone in prayer. He wishes Bret a speedy recovery and asks for forgiveness for those who enjoyed the violence from last week. In addition, he prays for those who follow Austin. Lastly, he wants Austin’s destruction. 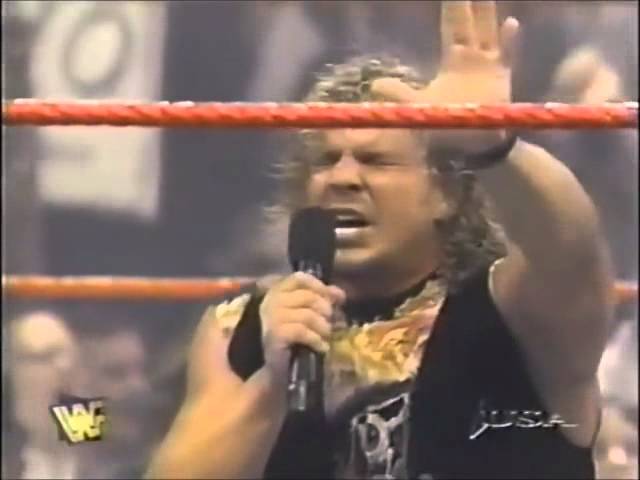 Austin interrupts from the Titantron and wants to kick Pillman’s ass. When PIllman goads him, Austin answers. He then enters the ring but quickly notices the Hart Foundation’s trap as Owen and Smith join Pillman in the ring. Swiftly, Austin leaves through the Omaha faithful. Pillman then requests to continue praying. Smith and Owen request that people pray for Bret’s recovery. This is so over the top.

Meanwhile, Austin procures an axe handle backstage, returns to the ring, and chases the Hart Foundation away.

After a commercial break, Pillman continues to pray backstage.

Summary: I’d call it an upset, but Rockabilly’s record isn’t climbing the charts at the beginning of his new gimmick.

After the match, Honkytonk Man distracts Funk so that Rockabilly could SMASH a guitar on Funk’s skull. They then double-team Funk until officials intercede.

Backstage, Owen and Smith wheel Bret in a wheelchair.

After a commercial break, Vince informs us that Bret underwent successful knee surgery last Wednesday. Footage of the surgery is shown as Bret cuts a promo at the entrance. He runs down Austin as the “scum of America.” Next, he besmirches the American wrestling fans and chastises us for being the “best.”

As the show prepares for a commercial break, we see footage from Shotgun Saturday Night when the Road Warriors broke Henry Godwinn’s neck. While I’m no fan of the Godwinns, that’s terribly unfortunate.

During the commercial break, a WWF “reality check” promo airs.

After the match, Ross interviews Furnas and LaFon in the ring. An angry LaFon wants a rematch.

We then see footage from Shotgun Saturday Night of Sunny Undercover. With Sunny on a bed with satin sheets, the Headbangers crash the party. Let’s just say the sounds she makes in the sheets don’t involve the Headbangers’ boom box.

Backstage, Ahmed Johnson apologizes for putting Sultan in the hospital. He then completely LOSES it. Either he’s completely bored with this storyline or Ed Ferrara told him to be more INTENSE.

In the locker room, Pillman prays with Owen’s Slammys.

Before the next match begins, Owen dedicates it to his “loving brother Bret.”

Summary: The rookie experiment with secondary titles in both promotions has finally ended. For the first time in Owen’s WWF career, he is a singles champion. Better things are on the horizon for this Maivia kid. Stay tuned.

After the match, Owen gives the IC belt to Bret who holds it up in celebration.

Meanwhile, Austin wheels himself and his axe handle in a wheelchair backstage.

Bret cuts a quick promo on Austin from the Titantron about the ambulance that brought Bret to the arena leaving with Austin.

Prior to the next match, we revisit the footage from Good Morning Kuwait. Following that, a video narrated by Todd Pettengill airs. Uh, I think I’ve found the secret cure to insomnia. After the match, Ross interviews Vader in the ring. Vader refuses to apologize for embarrassing himself and others in Kuwait. Next, he threatens Ross and calls the Omaha faithful “spoonheads.” Needless to say, it makes me want to play some Soundgarden. Nonetheless, when Vader puts his hands on Ross, Shamrock hits the ring and gives him a belly-to-belly suplex. He then grabs the microphone and tells Vader that their match at IYH XV will be “hard time” instead of Vader time.

Summary: The drama with the valets outperformed the action in the ring.

From the Titantron, Undertaker cuts a promo on Austin.

In the locker room, Pillman prays for Smith.

WWF Reality check ad with a kid acting like Austin—hilarious!

Backstage, Austin stews while contemplating his next move.

Before the main event begins, Smith dedicates the match to Bret.

Summary: Most of the match occurred during the commercial break.

After the match, the tag champs double-team Undertaker until Austin hits the ring to even the odds. When the heels flee, Austin grabs the WWF title and holds it overhead. He then gets in Undertaker’s face and delivers the Stone Cold Stunner. As Austin flips him off, Undertaker rises to chokeslam him. Austin then leaves the ring and notices that Bret is alone.

When Austin saunters after Bret, Jim “The Anvil” Neidhart surprisingly comes to Bret’s aid. Officials separate him from Austin, but Bret WHACKS Austin with the crutch sending him off the stage to the concrete floor. While EMTs place Austin on a board to stabilize him, Bret’s promise to send Austin to the hospital has been fulfilled. To close the show, Pillman gives a crazed smile to us knowing his prayers have been answered. 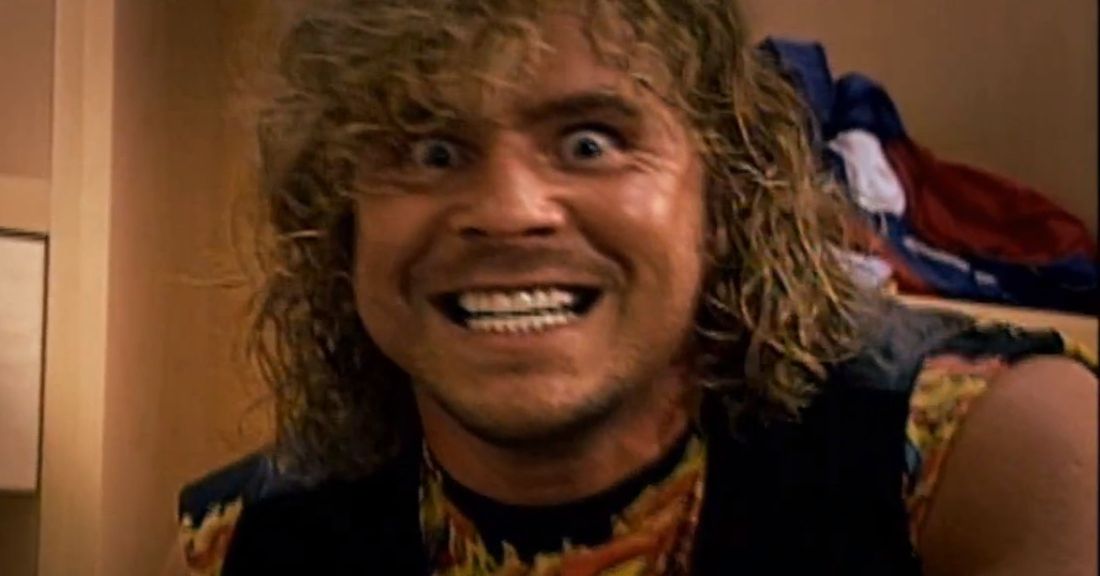 Conclusion: The drama between Austin and the Hart Foundation dominated the show with another member added to the Canadian group. In doing so, this was an extremely entertaining program. With Nitro rescheduled, RAW is WAR saw a big increase in the ratings. Can they continue a hot streak while the Bulls win the NBA title?