Taped from Muncie, IN

With most of the roster in South Africa, how will the WWF entertain us for two hours? Read on!

Remarkably, this episode is rated TV-MA. I wonder why.

Prior to the first match, Owen gets on the microphone and thanks Bret for reuniting the Hart family. He then addresses Michaels’ later appearance and tells him not to besmirch Bret.

The tag champs then cut a promo on the Road Warriors from backstage. When Smith requests to see the video “one more time,” Austin interrupts them but leaves for his match.

RAW is WAR is sponsored by Coliseum Home Video and America Online.

After the match, Honkytonk Man enters the ring, gets on the microphone, and embellishes Gunn. He then offers his services, but Gunn nails him instead.

Dok Hendrix then shills an Undertaker door banner for only $29.95.

A soldier then stands at the entrance who calls himself the Commandant—the commanding officer of the Truth Commission from South Africa. He then informs us that RAW is WAR will emanate from South Africa next week. After he besmirches America’s handling of democracy, he wants to teach the “liberal Americans” the meaning of democracy. Mind you, he said this in INDIANA. Know your audience, soldier. As the Muncie faithful chants “U-S-A,” the Commandant touts Bret for his anti-American political stance. A video featuring Bret from South Africa airs. While he runs down Austin, Bret then cuts a promo on Sid. We then see Bret coming to the ring waving the flag of South Africa.

Vince shills the upcoming edition of WWF Magazine with Bart Simpson and Bret on the cover. Unfortunately, we can’t see it. Thanks, Vince. Here it is for those curious: 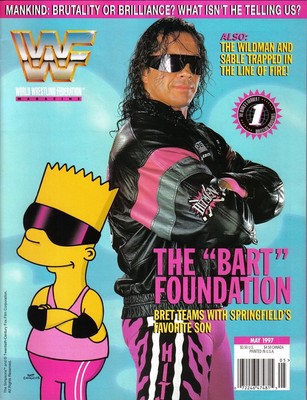 Michaels conveys to Bret that The Simpsons is “just a cartoon.” 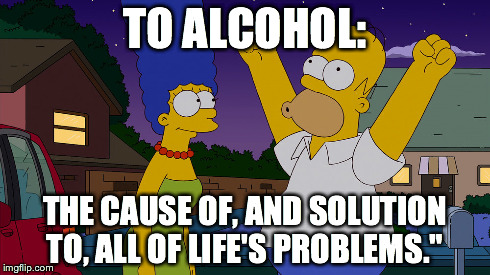 In the ring, Vince interviews the “Heartbreak Kid” Shawn Michaels. With Bret in South Africa, this ought to be interesting. In the meantime, we revisit RAW is WAR from two weeks ago when Bret attacked Michaels and Maivia. Michaels then mentions that Bret “has always been a bad guy.” Next, he states that “if Bret could make a buck, he’d sell his mother.” 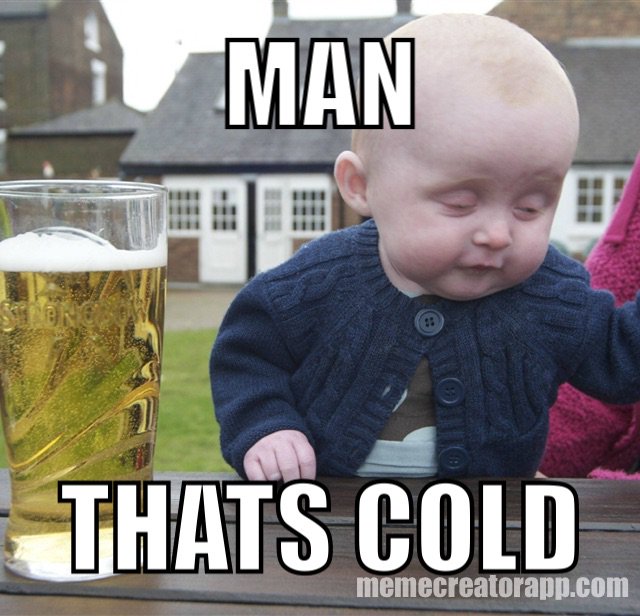 Michaels then notes Bret’s obsession with him and the WWF title. As he reflects back to 1992, Michaels was IC champ while Bret was WWF champ, but Michaels didn’t mind being second banana. When the shoe was on the other foot, Bret “did it kickin’ and screamin’ every inch of the way.” He then besmirches Bret for taking time off last year to see if Michaels fell flat on his face without him.

He then mentions Bret’s disdain for someone “who dances, and has long hair with a pierced navel.” As he talks about Bret’s returning for the sake of the WWF fans, Michaels calls it “horseshit.” Upon saying that Bret used “a rival organization against (Vince McMahon) and the (WWF).” He then calls himself “the hottest free agent in this business today.” After mentioning that Bret doesn’t leave his character at work, Michaels informs us that he’s “plain old Shawn” at home. He then tells the fans that they should not let other people tell them what to do and to do what they want. While not claiming to be a “role model,” he gives the paying customer his or her money’s worth in the ring.

Ultimately, Michaels states that Bret’s obsession with him and the WWF title “will be (his) destruction.” He then begins a strip tease until Owen and Smith hit the ring. Michaels then grabs a chair to keep them at bay.

HOT TAKE: While Michaels got some of his facts wrong (time when he was IC champ, monetary figures during his title reign of ’96), this was a great interview that enhanced Michaels’ status as a top babyface. Unfortunately, the tease of dissension among the nWo opposed this segment so it got SLAUGHTERED. Summary: Showcase match for the Headbangers.

Vince then mentions that Sid is still not here although he’s scheduled for the main event.

After the match, White was BUSTED OPEN. With two pools of blood on the mat, I can see why this was taped and rated TV-MA.

At ringside, Ross interviews Shamrock until Vader and Bearer interrupt him. Vader gets in Shamrock’s face, but officials stand between them.

As Ross shills the WWF Superstar Line, WWF President Gorilla Monsoon states that Sid isn’t backstage and inserts Austin into the main event in case Sid doesn’t appear. Austin then negotiates that if he can face Bret at IYH XIV, then he’ll wrestle in tonight’s main event. Monsoon agrees.

In the ring, Ross interviews Mankind with Bearer who cuts a Cactus Jack-like promo. We then revisit the fireball spot from last week. He then offers Undertaker a mask just like the one he wears. Suddenly, Undertaker’s bell tolls, and Undertaker cuts a promo on the Titantron.

Summary: Although this was a somewhat disjointed brawl, this match-up could have possibilities down the road.

After the match, Mankind and Vader brawl as Austin chases Owen and Smith backstage. Bearer then makes peace as the feed ends.

Conclusion: Certain wrestlers, due to the South Africa tour, were overexposed on the show--Austin, Smith, and Owen. On the other hand, where’s Sid? According to Meltzer, Sid supposedly injured his back while training and had a herniated disc. The Michaels interview was worthwhile, but the rest of the show made Nitro look award-worthy. Can RAW is WAR beat Nitro this week?

Who won? Nope, Nitro won by more than 0.8. The star power on Nitro defeated the storyline segments on RAW is WAR this week. Next week, Nitro is in Philly with Public Enemy in a street fight while RAW is WAR is taped from Johannesburg, South Africa with the Godwinns versus the Road Warriors.