**WARNING** This reflection is rated TV-MA due to foul language. Please put the kiddies to bed prior to reading. Thank you for your discretion.

Match 1: The Road Warriors versus Savio Vega & Crush (w/ the Nation of Domination) Summary: Just an appetizer for the Chicago street fight at WrestleMania XIII on Sunday.

After the match, Faarooq continues his onslaught with the nightstick until Johnson clears the ring with a 2x4. He then gives a member of PG-13 a Pearl River Plunge as the Road Warriors deliver the Doomsday Device to D’Lo Brown. That caused a 360° sell by Brown. Woohoo!

Todd Pettengill then shills the 1997 Slammy Awards this Friday at 11pm ET on USA.

According to Vince, there are rumors that the steel cage match later tonight may not be for the WWF title. Another rumor that the “Heartbreak Kid” may appear tonight is also floating around.

Prior to the next match, we revisit IYH XIII when Chyna attacked Marlena. We then revisit RAW the following night when she did it again. Following that, on RAW two weeks ago, she entered the ring to stop Bret from attacking Helmsley. Finally, we see Worcester Centrum security remove her from her ringside seat on last week’s show.

RAW is WAR is sponsored by Selsun Blue and Sega. Summary: Much better than I expected as Funk brought the workrate and Helmsley kept up with him.

After the match, Helmsley and Chyna double-team Funk until officials break it up.

In a press conference earlier today in East Rutherford, NJ, Undertaker presented a paper tombstone to honor and thank NJ Governor Christine Todd Whitman for deregulating pro wrestling as a sport. Of course, that’s NOT what Vince told us.

Summary: Nothing to see here. Move along.

After the match, Mini-Vader misses a clothesline so Sagrada, Jr. dropkicks him to the floor. Sagrada then pushes Mini-Vader off the platform to the floor and hits a cross body block. Methinks this guy wants to be a WWF mainstay.

During a commercial break, an ad for WWF: Full Metal airs.

In the ring, Kevin Kelly interviews Bret. After Bret notes his accolades, he believes that he deserves respect. He then mentions that the new motto for the WWF is “you scratch my back, and I’ll stab yours.” HA! Upon vowing to win the WWF title tonight and change the face of WrestleMania XIII, he’s going after Stone Cold Steve Austin.

After the match, Sultan gets in Maivia’s face, but Tony Atlas restrains Maivia.

Ross shills WrestleMania XIII this Sunday LIVE on PPV with Sid supposedly defending the WWF title against Undertaker. Will he retain tonight?

In the ring, Vince McMahon interviews Michaels who walks down the ramp. Surprisingly, he doesn’t favor his knee whatsoever. Michaels states that he has found his smile and calls himself the “World’s Most Emotional Wrestler.” Upon thanking the WWF fans, he states that his knee is improving, and his return is imminent. He then “has a bone to pick” with Vince. With regards to WrestleMania XIII, he wants to be a part of it and invites himself. In fact, he’ll be the guest commentator for the WWF title match on Sunday. 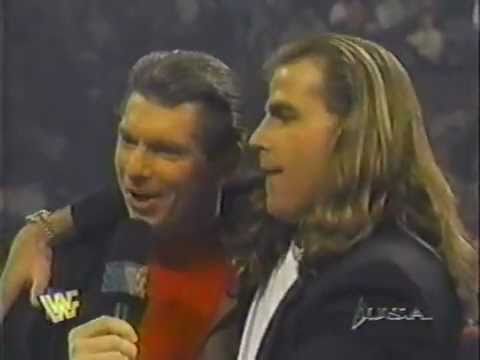 In a laughable moment, he says that he has “a lot of face to spill” rather than “a lot of space to fill.” HA! He’ll also be at the 1997 Slammy Awards this Friday.

After the match, Gunn gets in Shamrock’s face and challenges him. Upon accepting Gunn’s challenge, Shamrock takes down Gunn with an arm bar causing Gunn to tap out. When Gunn requests a second chance, Shamrock hooks the ankle lock. Gunn taps out again. When Gunn threatens to bring a steel chair into the ring, Silverman stops him. Gunn then leaves telling Shamrock they’re not finished.

Backstage, Austin calls Shamrock “overrated” and hopes he calls the submission match down the middle. He then claims while Bret will win the title tonight, he will be champion after WrestleMania XIII.

While the big blue cage gets set up, Sid is aware of Austin’s shenanigans but will have none of it.

Vince then shills the 1997 Slammy Awards this Friday.

Summary: More appetizer for both the submission and main event matches at WrestleMania XIII.

The WWF Rewind is Austin’s chair shot to Undertaker during the main event.

After the match, Vince interviews Bret who is PISSED OFF. Before uttering a word, Bret shoves down Vince and informs him that frustrated “isn’t the God-damned word for it. This is bullshit!” As Bret whines about being screwed, he claims there is a lot of “God-damned injustice” in the WWF. Next, he exclaims “everyone in that God-damned dressing room knows that (he’s) the best there is, the best there was, and the best there ever will be.” He then yells at the Syracuse faithful: “If you don’t like it, TOUGH SHIT!” 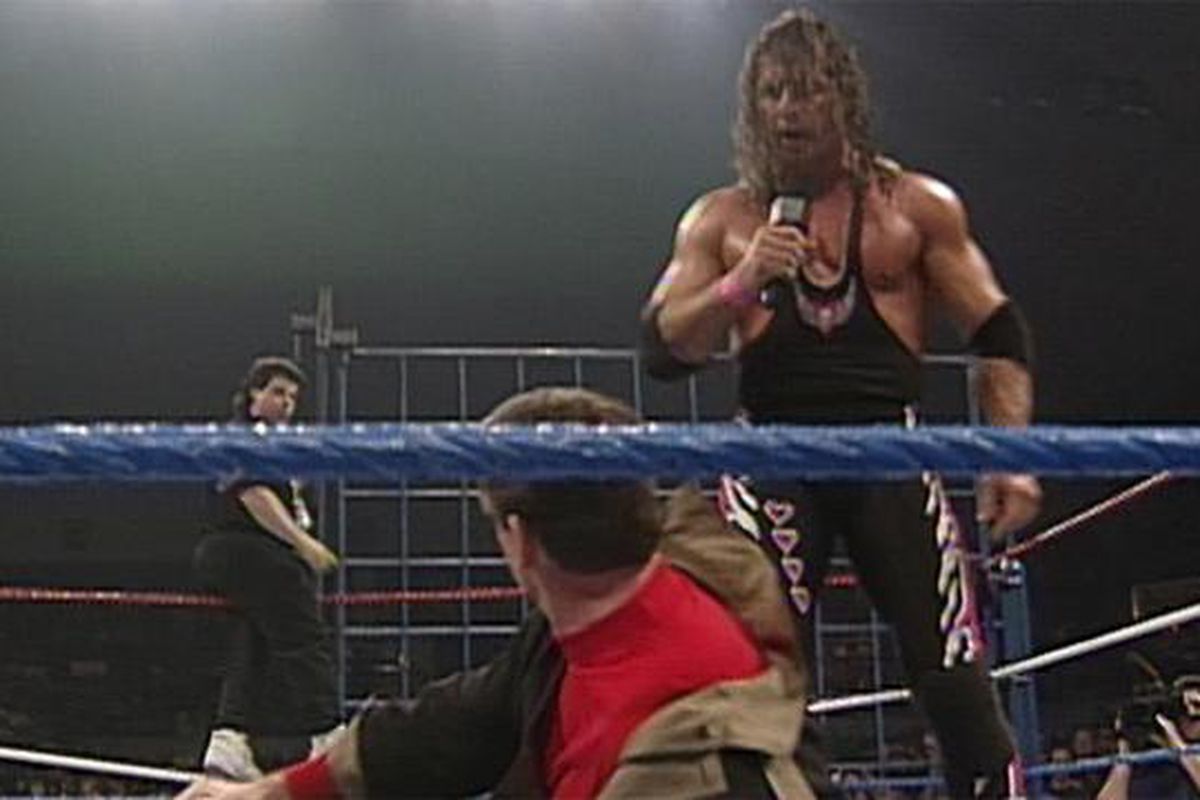 From the Titantron, Austin rebuts by calling Bret a loser and a crybaby. As Vince returns to the broadcast table to apologize for Bret’s language, Sid comes to the ring stating “I don’t know shit…” HA! Undertaker then comes to the ring, but Bret hits a tope suicida on him. Woohoo! As he and Undertaker brawl, Austin joins the fray. Undertaker then enters the ring to fight Sid as Bret and Austin brawl at ringside.

As Michaels comes down the ramp much to Vince’s dismay, Bret counters a piledriver on the ramp with a back drop to Austin. Michaels then gets into the ring as Undertaker makes Sid taste the steel railing. It must have tasted like the Bangkok Pig at the Blue Tusk Pub. When Michaels grabs a chair to protect himself, RAW is WAR goes off the air.

Conclusion: Wow! What a controversial and exciting ending as well as preview for WrestleMania XIII. Also, the segments that built the rest of the card were solid despite the quality of wrestling. I think it’s one of the better go-home shows for a PPV in a long time.

Here’s the card for WrestleMania XIII:

Now let me address the Bret situation: First, if I were Bret, I’d be PISSED OFF with Shawn Michaels’ return. I knew it back in ’97 as well as I do now. Michaels, knowing that Bret’s tied up with Austin, couldn’t face him at WrestleMania. That would put a burn in anybody’s side. Second, his tirade was played beautifully. If he wanted the WWF fans to dislike him, swearing in front of their children and whining like a crybaby worked wonders.

Bret’s job at WrestleMania XIII is to help sway the fans in Austin’s favor as well as cement his heel turn.

Can this rather historical RAW is WAR beat Nitro this week?

Who won? Nope, the Monday night wrestling audience still leans heavily toward Nitro as it beats RAW is WAR by more than a ratings point. While Nitro has maintained its course with realistic storylines and some quality wrestling, RAW is WAR has improved dramatically in terms of viewability. I can only wonder what each program does next week to compete with one another.