What’s next for Sting after battling the nWo last night? How will the nWo react? Read on!

The program begins with the aftermath from Uncensored as the nWo laid out Luger thanks to the “Real Hot Rod” Dennis Rodman.

Summary: Showcase match for Mysterio with an awfully botched finisher. I hope Psicosis had the Excedrin handy when he got backstage. “Mean” Gene Okerlund interviews Arn Anderson by the entrance. While praising Sting for his actions last night, Arn informs us that the fifth, sixth, and seventh vertebrae in his neck need to be fused. He then relates a story of his grandmother to the Horsemen. Next, he shoots on Kevin Sullivan’s family and wishes to bury the hatchet with him. Finally, he states that he will return at some point.

We then revisit stills of the Savage-DDP confrontation from last night.

At the entrance, Okerlund interviews DDP who acknowledges that Kimberly is his wife and refers to Elizabeth as “that bimbo Liz.” He then informs Savage that he’ll become a “chalk outline.” Yikes! Suddenly, Savage and Elizabeth cut a promo from the rafters stating he’s an icon, but DDP’s a wrestler with no name. He then challenges DDP who’s ready “RIGHT NOW.” In a hurry, DDP climbs into the stands after Savage. Great segment!

Before the next match begins, Bischoff and the World tag team champions Outsiders come out to the broadcast table to make an announcement. Bischoff notifies us that the Outsiders will wrestle tonight.

Summary: Showcase match for the Dungeon of Doom with some idiocy by Renegade.

Match 4 for the WCW US title: Dean Malenko (champion) versus Scotty Riggs

Summary: Showcase match for Luger and Giant. While this was Nelson’s only WCW appearance, Rantula would appear on WCW Saturday Night a few times in 1997.

At the entrance, Okerlund interviews Luger and Giant. While Giant was “ecstatic” about Sting’s actions from last night, Luger was euphoric. He even mentioned one of Buddy Lee Parker’s former gimmicks—the Leprechaun. We then revisit stills of Sting’s destruction of the nWo last night.

After a commercial break, stills from the Glacier-Mortis match were shown.

The nWo then hits the ring to relish their victory from last night.

Not THAT kind of relish although it is St. Patrick’s Day. While Savage wants a piece of DDP at Spring Stampede, the Outsiders challenge the Steiners. As Hall finishes with “too sweet,” he gets DRENCHED by an incoming soda but plays it off beautifully.

We then revisit moments from earlier. After the match, Public Enemy attacks the Horsemen until Debra WAFFLES Grunge in the back with the Haliburton. When Grunge confronts her, Jarrett nails him with it. The teams then brawl toward the broadcast table until Public Enemy exits backstage.

At the entrance, Okerlund interviews the Horsemen who will face Public Enemy at Spring Stampede. Jarrett then cuts a promo on them while Mongo takes exception to Savannah’s disdain for Debra. Afterward, he also cuts a promo on Public Enemy. To finish the segment, Debra mocks Grunge’s girlfriend. 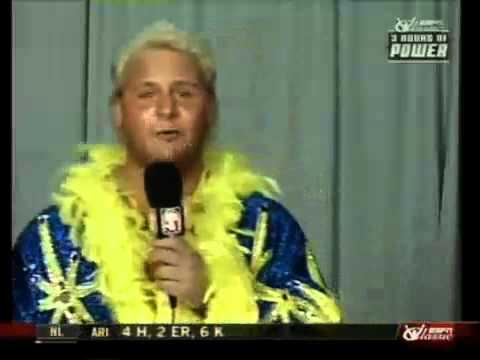 Next, a pre-recorded black-and-white promo involving Hogan and Rodman airs.

Summary: Showcase match for the champs. This was Bunkhouse Buck’s final Nitro appearance.

We then revisit Piper’s interview from last night as he ran down the Horsemen.

After the match, Okerlund interviews Benoit in the ring. Suddenly, “Nature Boy” Ric Flair comes to the ring to a HUGE pop. Benoit then gives kudos to Arn for his upcoming surgery and cuts a promo on Sullivan. Afterward, Flair tells Piper that instead of being in Charleston, he was in Savannah last night “with all the girls.” He then informs Piper that the “Rowdy” one “dropped the ball” and belittles him for wanting to go home weeks ago. In contrast, rather than having Flair take care of Arn’s family, Arn would say “bring me a Miller Lite.”

Afterward, the nWo destroys the Steiners and Harlem Heat until Luger and Giant hit the ring. WCW clears the ring, and Sting rappels from the ceiling to join them. He then points the bat as a fearful Hogan exclaims “he’s pointing at me!”

Conclusion: Hot finish to a show filled with angles but not great competitive wrestling. While matches were promoted for Spring Stampede, Sting’s appearance cemented his re-pairing with WCW. What’s on RAW is WAR?