It’s Spring Break time on the Redneck Riviera! Grab your beer bongs and Fireball, but don’t forget your SPF 100!

Hollywood Hogan and DENNIS F’N RODMAN open the show shilling Rodman’s new movie—Double Team. While Rodman had been negotiating with the WWF for WrestleMania XIII, I guess WCW’s price was right.

We’re LIVE from Club La Vela at the beach! Remarkably, the ring floats in the middle of the pool. Suddenly, a WHITE limousine arrives as “Rowdy” Roddy Piper and his Family emerges.

After the match, “Mean” Gene Okerlund interviews Piper with his Family. First, Piper addresses his critics as he attacks Howard Stern. Second, he mentions Rodman albeit briefly. Third, he discusses the WWF. Be careful, Piper, Jerry McDevitt’s watching. He dismisses their subtle jab at him by subtly discrediting their roster. Fourth, he states that he beat Goldust with only one good hip.

As Piper touts his Family, the Four Horsemen come to the ring. Arn then offers the services of the Horsemen as Piper’s partners for Uncensored. When Piper tries to rebut, Flair interrupts and implores him to accept the Horsemen’s offer. Piper accepts. So much for Piper’s Family. Arrivederci!

Summary: Showcase match for Iaukea with the nWo drama intertwined.

After the match, Okerlund interviews Guerrero in the ring. Guerrero’s ready for Malenko on Sunday.

Summary: Showcase match for DDP. While Pittman continued working on WCW Saturday Night, this was his final Nitro appearance.

After the match, Okerlund interviews DDP in the ring. While DDP cuts a promo on Savage, Club La Vela loses power. D’oh!

Once power is restored, Okerlund continues his interview with DDP who calls Savage “monkey boy.”

Tony then shills Hall and Nash’s upcoming appearance on MTV’s Fame Or Shame. Needless to say, but Nash had to throw his weight around.

In the ring, Okerlund introduces MTV’s John Sencio who showcases Miss WCW Monday Nitro Pamela Rogers. Where have I heard that name before? Oh yeah, she’s a teacher who had an illegal relationship with one of her students. To put it mildly, becoming Miss Nitro may have been her crowning achievement in life. After the match, Okerlund interviews Team WCW in the ring.

Summary: While the execution was there, the Panama City Beach faithful sat on their hands.

After the match, Bagwell continues to whip Riggs until Jericho hits him with a reverse thrust kick.

At the entrance, Okerlund interviews Madusa who cuts a promo on Luna Vachon and then butchers Akira Hokuto’s name BADLY. 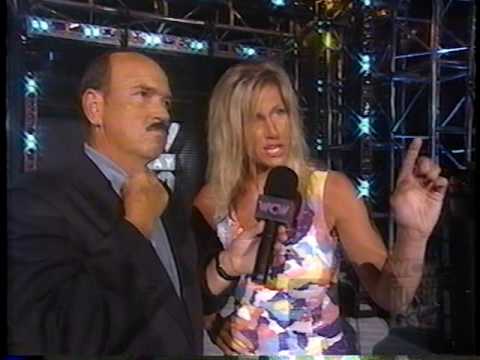 Summary: More carnage from the bookerman.

After the match, Sullivan nails Harrison with a wooden tray and whips him into a Jacqueline clothesline. Upon tossing him down the steps toward the beach, he slams Harrison on the deck while Jacqueline gives him the business. Finally, Sullivan and Jacqueline toss Harrison into the pool. If Harrison didn’t become such a ferocious sex offender, I’d feel sorry for him. Knowing that, I don’t.

In the ring, Okerlund interviews Sullivan, Jacqueline, and Hart. Sullivan then tells Piper “no excuses” regarding the main event at Uncensored.

The nWo then hits the ring along with Sting. As Hogan confirms that Dennis Rodman has joined the now, we see a pre-recorded video where Rodman gets the shirt. Hogan then bestows the nWo t-shirt upon a sullen Sting. Nash then cuts a promo on the Steiners. After Hall tells Luger and Giant to “bring it,” Savage cuts a promo on DDP, but they don’t acknowledge him by name. Hogan then closes the segment by calling the nWo “tits.” If Hogan was so hard up, I’m sure a flock of spring break girls could show him some.

During a commercial break, a promo for WCW Uncensored airs. It will be LIVE on PPV on 3/16.

At the entrance, Okerlund interviews Public Enemy as Grunge is PISSED OFF with the Horsemen. As Rocco raps, Harlem Heat emerges and ambushes them.

Conclusion: While an important storyline was added for the PPV on Sunday, the highlight of the Spring Break episode of Nitro was the convicted felon being dumped in the pool. I can only hope the PPV is worth the hype. What’s on RAW?