This was a special show for me as it was the second Nitro I attended live.

Quick story before I begin my reflection:

Back in December ’96, I met Ric Flair in Matthews, NC following a special family event. Despite his elongated recovery from injury, Flair was incredibly gracious and polite. When I asked him when WCW was making its return to Atlanta, he must have mentioned something to the front office because this show was scheduled soon thereafter.

Prior to the opening match, the nWo exits a Hummer limousine. Behind the limousine, Dr. Harvey Schiller, President of Turner Sports, appears. What’s he doing here? Summary: More angle than match as the Horsemen drama continues. Due to the legitimate shot with the Haliburton, Mongo doesn’t move for a few moments afterward.

After the match, Flair and Arn join their comrades in the ring. “Mean” Gene Okerlund interviews them as Arn berates Jarrett for his actions. When Jarrett talks to Flair, the “Nature Boy” retorts by saying that Jarrett’s “making him look bad.” Mongo wakes up and questions Jarrett’s intentions. When Debra speaks, the entire Atlanta faithful boos her. Regardless, she wants unity within the Horsemen since they will supposedly face Public Enemy at Uncensored.

Summary: Showcase match for DDP whom the Atlanta faithful adores.

After the match, Okerlund interviews DDP in the ring. We then revisit last week’s show when Savage blindsided DDP. I smell an upcoming feud.

At the broadcast table, Jimmy Hart, Kevin Sullivan, and Jacqueline interrupt Schiavone. Jacqueline touts Sullivan’s wrestling skills as he cuts a promo on Benoit. They’re still in MC Hammer mode because they’re “too legit to quit.” Hart even had that airbrushed on the back of his jacket.

After a commercial break, “Hammering” Hank Aaron was shown standing in the front row.

After the match, Malenko grabs the microphone and cuts a promo on Guerrero.

On WCW Saturday Night, a whole lot of squash gets served. Bring a fork! At the entrance, Okerlund interviews Eric Bischoff. While Bischoff gloats his influence, Schiller emerges from the entrance to address him. As Okerlund mentions that Schiller is Bischoff’s supervisor, Schiller questions Bischoff’s continued abuse of power. Due to the abuse, Schiller suspends him. Woohoo! 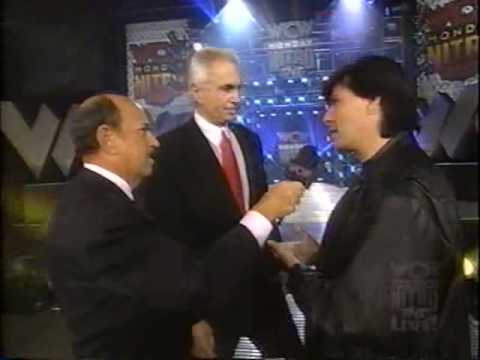 Summary: Too quick to be worth much. While I understand Guerrero had to retain, the method by which he did so seemed suspicious.

In the ring, Okerlund interviews Guerrero. Suddenly, Malenko hits the ring to argue with him.

Summary: More angle than match as Bagwell and Riggs will have a rematch at Uncensored.

After the match, Bagwell and Wallstreet try a double-team, but Riggs wisely exits the ring, grabs a metal chair, and almost ANNIHILATES Bagwell.

Lee Marshall then delivers the 1-800-COLLECT road report from “Panama City Beach, FL.” Since he loves Heenan so much, I wonder if he got a tattoo of a weasel while down at the beach. Piper then comes to the ring and teases Hogan about succumbing to his sleeper. While he mentions his immediate family in Oregon and his second yet extended family—the fans, he wants to create a third family for Uncensored. To do so, he’ll face six challengers to build his team. Uh oh.

The first challenger is a built guy with a ponytail, but Piper applies a hammerlock to make the guy tap out. Accordingly, the Atlanta faithful give the guy thumbs down.

The second challenger is the future Luther Reigns who wasn’t much more than a Power Plant trainee in 1997. When Reigns tries to slam him, Piper applies the sleeper to a huge ovation. Reigns also gets thumbs down. The third challenger gets demolished by the fourth challenger.

The fourth challenger is a boxer. Prior to fighting Piper, Schiavone uncorks “this is going to be a Nitro that’s remembered for years.” How prophetic. According to IMDB, the boxer is Craig Mally. While Mally gets the early offense, Piper unleashes his own and knocks him down. After Piper gets knocked down, he WALLOPS Mally and knocks him down a second time. As the Atlanta faithful begins to boo, Mally overwhelms Piper. Next, Piper shakes his hand and welcomes him aboard although he wants another “round” without gloves. Nevertheless, we have one member, so let’s move on.

The fifth challenger is a kickboxer—Layton Morrison--who picks Piper up, places him atop the top turnbuckle, and punts him. He then decks Piper with a kick to the head. As Piper comes back, the Atlanta faithful is SILENT. Reluctantly, we have family member #2. 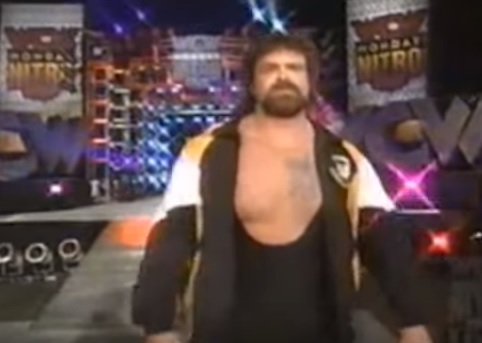 The sixth challenger is John Tenta who hasn’t seen a WCW ring since October. Since the Atlanta faithful recognize him, we cheer him. When Tenta chokes Piper, the other two family members attack him. As they fight among each other, Piper enjoys it and welcomes Tenta to the team. BOOOOOOOOOOOOOO!

While I understand that Piper wants to be a strong third-party in the WCW-nWo political feud, this idea is harebrained from the onset. Trotting out nobodies on LIVE TV in front of a hot crowd equals not only bored fans but also ratings death. If I hadn’t been in the Omni that night, I’d be watching RAW during this elongated segment.

At the entrance, Okerlund interviews Madusa who believes Bischoff should have been fired yet is also ready for Akira Hokuto. She then mentions Luna Vachon who bolts through the entrance to attack her. Luna then makes Madusa taste the steel railing. It must have tasted like the El Santo at Stats. 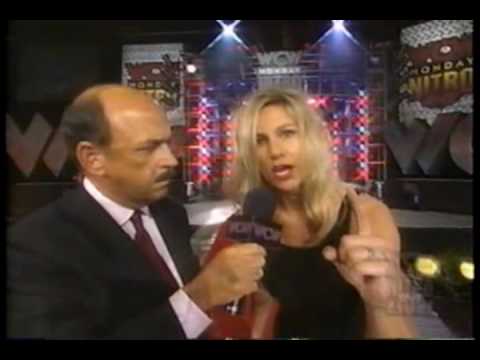 Prior to the main event, the nWo comes to the ring including the suspended Bischoff. Interestingly, Sting stands among them. While Hogan mentions Bischoff’s “personal” relationship with Ted Turner, he condemns Schiller for being “out of his league.” He then calls Piper’s Family “wrestling fans.” Savage then runs down Piper as the nWo lovefest completes the segment. 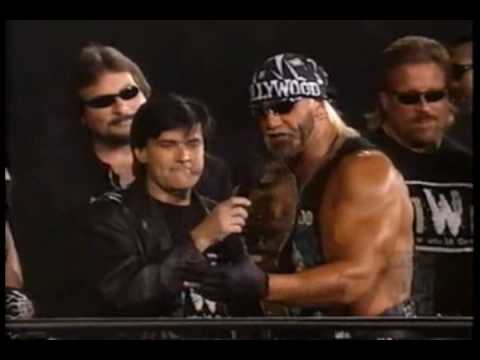 During the commercial break, a promo for WCW Uncensored airs. It will be LIVE on PPV on 3/16.

If you miss that WCW PPV, Spring Stampede will be LIVE on PPV on 4/6.

While Sting comes to the ring with his bat, Piper and his family hit the ring. Meanwhile, the Atlanta faithful chant “We Want Sting,” Schiavone signs off, and a melee breaks out.

Conclusion: What did this show accomplish? First, it showcased the main event for Uncensored. Second, it mentioned the World TV and US title matches. Third, it promised us Bagwell-Riggs Part Deux. But fourth, and most importantly, it gave us the WORST segment in Nitro’s history thus far.

As a fan in the Omni, I loved every minute that I was there except for the Piper’s Family segment. What’s on RAW?