Since the WWF’s product has improved, what can Nitro do to maintain its ratings streak?

As the program begins, the nWo exits its limousines as Rogers goes down on the concrete. Who is responsible for these shenanigans?

Summary: Showcase match for Mysterio with some great workrate and high-flying. The Tampa faithful ate this up with a spoon.

After the match, Mysterio calls out Regal as Schiavone notes they will face one another at SuperBrawl VII without a time limit. Hmmm…

Summary: Showcase match for Mongo who may have injured his knee. Will he make it intact to SuperBrawl VII?

We then revisit Nitro from two weeks ago when Piper gets railroaded into facing Hogan at SuperBrawl VII.

Prior to the next match, Malenko cuts a promo on Syxx.

Summary: Showcase match for Malenko. Someone haul this Brookside kid back to the WCW Power Plant.

After the match, Syxx comes through the entrance and completely disrespects Malenko.

Upon completion of a commercial break, Hall, Nash, and Syxx come out to acknowledge a car accident involving the Steiners. Nash then supplies a videotape of the incident to Schiavone as Zbyszko wants to stretch Hall RIGHT NOW. Allegedly, Zbyszko’s ADD flared up causing him to concentrate on shilling vitamins instead.

Summary: Less comedy than I expected but still neither good nor interesting.

At the entrance, “Mean” Gene Okerlund interviews DDP who denies any wrongdoing against the nWo.

On WCW Saturday Night, Jeff Jarrett faces Konnan and a whole lot of nothing else happens.

Prior to the next match, Okerlund interviews Regal who refers to Mysterio as “Dopey” from the movie Snow White and the Seven Dwarfs. Summary: Hmmm…that looks familiar, no? Didn’t a Polynesian wrestler with limited experience just beat a blue blood on RAW last week? In my opinion, this is reactive booking by WCW and not very smart. WCW should take lessons from fellow Atlanta resident Coca-Cola by not acknowledging the competition in order to maintain status at the top of the food chain.

After the match, a horrified Regal questions and shoves referee Mark Curtis. In the aisle, Teddy Long and Public Enemy celebrate with Iaukea. Welcome to the midcard, kid!

We then revisit Rogers’ demise at the beginning of the show.

Summary: Tally one in the column for WCW.

On the other hand, Bischoff powerwalked to the ring to berate Anderson. He then fired both Anderson and Jett. Afterward, he raises Patrick’s arm while Patrick’s OUT COLD.

We then see the videotape that the nWo gave to Schiavone earlier. With Syxx holding the camera, Nash drove them around as they intercept the Steiners. While they tail them down the street, they intentionally bump the Steiner’s car from behind. When they pull up next to them, Rick gives them a earful. Unfortunately, he then flips the car on the side of the road. The nWo then deserts the scene as the tape ends. Suffice it to say, the Steiners will NOT be competing at SuperBrawl VII. Cool stunt with good trick camera action. Check it out:

At the entrance, Okerlund interviews Sullivan with Hart and Jacqueline. Hart then refers to Sullivan and Jacqueline as “too legit to quit.” As Sullivan runs down “Chris and Nancy,” Jacqueline chides Woman about the size of her ass.

After the match, Jacqueline comes into the ring and gives Dean a series of elbow drops.

Match 9 for the WCW US title: Eddie Guerrero (champion) versus Konnan

Summary: With more time and better preparation, this could be a much better match.

After the match, Meng enters the ring to gang up on Eddie. Suddenly, Jericho runs in, dropkicks Barbarian, and gives Meng a spinning heel kick. He and Eddie then clear the ring.

At the entrance, Okerlund interviews the Four Horsemen. As Flair reels off another “Meeeeeeeeeeeeeeeeeeeeeeeeean (wooooo) Geeeeeeeeeeeeeeeeeeene,” he calls Benoit “love machine.” Arn then deems the Horsemen the “core of WCW.” While Mongo cuts a promo on Jarrett, Debra refers to Jarrett as a “winner” and Jacqueline as “bowlegged.” OUCH! When Okerlund directs the interview to “Nancy,” Benoit’s ready to “kick the door down and make a statement” against Sullivan.

After the match, Giant procures a can of black spray paint and wrote Hall on Top Gun and Nash on Swinger. Okerlund then interviews him along with Lex Luger who has medical clearance for Sunday. Meanwhile, Bischoff interrupts from the entrance and informs Luger that he’s a week too late. Despite that, Luger states that he will be in San Francisco. Giant and Luger then chase Bischoff backstage to end the segment. 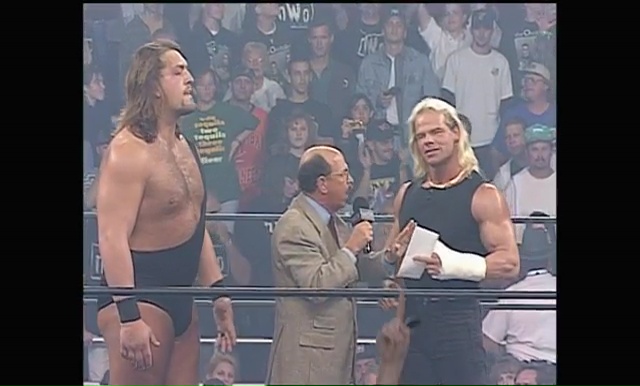 Promo for SuperBrawl VII LIVE on PPV this Sunday.

Via satellite, “Rowdy” Roddy Piper cuts a crazed promo from inside a cell at Alcatraz. After he tosses his own cell, Piper states he’ll stay in Alcatraz all week to prepare for his title match against Hogan. As he quotes Lou Reed lyrics, he does some push-ups to finish a once-in-a-lifetime promo. That was surreal. 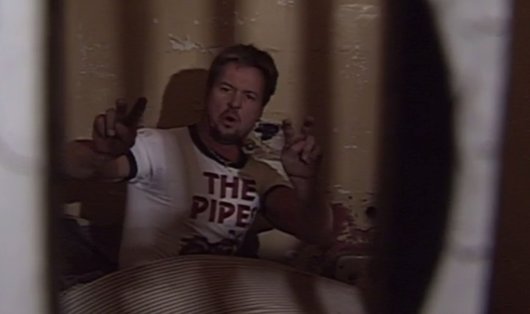 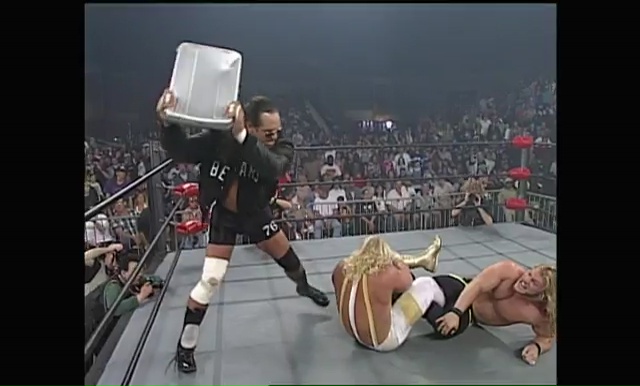 Summary: More angle than match as Mongo lets Jarrett know who he’ll be facing on Sunday.

As the nWo enters the ring, Hogan rips his t-shirt and poses for his hometown faithful. He then cuts a promo on Piper as Sting and “Macho Man” Randy Savage emerge through the entrance. When they approach the ring, Savage tells Sting to save it for Sunday.

Conclusion: Seriously, the only two worthwhile parts of the show was Iaukea’s upset and Piper’s promo. What’s on RAW?