Can Booker T even the best-of-seven series at three, or will Benoit earn his title shot at the PPV? Who is tonight’s special guest? Who’s Goldberg’s next opponent victim? Get comfortable and let’s enjoy WCW!

To start the show, the Nitro Girls’ Chae, AC Jazz, and Whisper dance at the entrance in black leather. Yowza! It’s not wonder why Whisper became Mrs. Hickenbottom.

Earlier today, Tenay interviewed some young fans who are ready for DDP to join the nWo Wolfpack. Tenay was smart enough not to interview any smart marks.

Speaking of the Wolfpack, they emerge through the entrance to a great pop. Like last week, Curt Hennig hobbles to the ring on crutches. Sting’s sporting the red face paint like he wore on Thunder. Wearing a beret and nWo hockey jersey, Nash gives a huge shoutout to DDP for his support of Nash’s career. 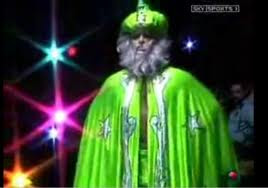 Although the vote is “almost unanimous (Savage being the obvious objection),” Nash believes that DDP belongs with the Wolfpack. Next, he cuts a promo on “Hollywood” Hogan until Hogan sliences his microphone. From the luxury box, Hogan cuts his own promo on Nash. Meanwhile, Dennis Rodman of the Chicago Bulls sits next to him and shoots fireworks from the turnbuckles. HERE COMES KANE! Oops, wrong show.

Regardless, Hogan turns the lights off the ring o bully the Wolfpack. Upon restoring the ring lights, Hogan segues to commercial.

(Missing from the beginning of the show is a Hogan promo with Rodman who went AWOL on the Bulls during their quest for a sixth championship in the 90s in order to have fun with WCW.) They don’t call him a bad boy for nothing.

Summary: Showcase match for the not-popular-whatsoever Nagata. This was quite the free fall from the star power of the nWo.

Since “Mean” Gene Okerlund is with some of the Nitro Girls in Roseland, NJ, Schiavone performs interviews tonight. For you Sopranos fans, Roseland is not too far from Tony’s last residence of West Caldwell. Regardless, Schiavone interviews “Lionheart” Chris Jericho who has an Airborne Express envelope with him. Wearing a Monday Night Jericho t-shirt (psst…I want one), Jericho explains that he has a “registered letter…from Ted Turner.” He reads the letter and states that “(Jane) sends her regards.” HA!

He continues with “Dean Malenko should not be the champion” and celebrates. As he persists, the letter turns away from his favor with “tough luck…the decision stands.” To say that Jericho is despondent would be pinpoint accurate.

We revisit the end of the main event from Thunder when Luger and DDP “won” the World tag team titles. Of course, the decision was reversed before the show ended.

Summary: Intriguing mid-card match that provided a preview of the Reese-Guerrera match at the PPV. I do NOT like Guerrera’s chances.

In the nWo Hollywood luxury box, Hogan, Rodman, Bischoff, Bret, Giant, Disciple, and some women are hanging out. Hogan cuts a promo on Nash and also has a big surprise.

At the entrance, Schiavone interviews JJ Dillon who describes the upcoming Sting-Giant match at the PPV on Sunday.

Summary: I knew WCW wasn’t just having a showcase match for Eddie at the top of the second hour, so what’s Chavo up to now?

After the match, Putski takes exception with Chavo. When Putski lets down his guard, Chavo nails him. Eddie scampers away from Chavo.

Backstage, Nash and Konnan cut a promo on Hogan and tease Rodman.

In the luxury box, Bischoff and Giant discuss the match against Sting at the PPV. Giant equates Sting to an insect and a chicken. The champagne is flowing possibly to Nitro’s detriment.

At the entrance, Schiavone interviews Curt Hennig, “Ravishing” Rick Rude, and Konnan. Rude cuts a promo on Goldberg which prompts the Detroit faithful to chant “Gold-berg.” As Hennig continues the promo against Goldberg, Konnan tries to rally the Detroit faithful with his catchphrases.

Summary: It took good storytelling and solid wrestling to will the Detroit faithful into the match, and these guys succeeded. What can they do for a seventh match?

After the match, Benoit kicks Booker T’s leg out from under him out of spite. Nice sportsmanship, dickhead. Benoit continues to pummel Booker T until Stevie Ray jumps into the ring and pulls him off.

At the entrance, the Nitro Girls dance in black and silver while Schiavone announces Justin Castillo of Tulsa, OK as this week’s Nitro party pack winner. His video isn’t shown, however.

We revisit the nWo Hollywood luxury box where Hogan mimics Savage’s gravellike voice. Next , he cuts a promo on Savage, and Elizabeth joins him alongside Bret. This is BAD TV.

Prior to the next match, we revisit Booker T’s victory that knotted up the series at three wins apiece. The seventh (and deciding?) match will occur on Thunder.

Summary: I don’t give a shit that Finlay defends his title. Give him some fair competition because, in 1998, Smiley ain’t it. The Detroit faithful knew it and shat all over it.

At this point, WCW has mentioned Goldberg versus Chavo but not a main event. Hmm…

In the ring, Schiavone interviews Sting who cuts a promo on Giant. Afterward, he sends a crotch chop up toward the luxury box.

Following a commercial break, Schiavone interviews “Rowdy” Roddy Piper who panders to the Red Wings fans. While the Detroit faithful could give two shits, Piper rambles while running down Rodman. In fact, he subtly teases Rodman about his Carl’s Jr. commercials. When Piper mentions him, Savage powerwalks to the ring.

Savage and Piper discuss their tag team match, and Savage says he’s not a “mark.” Afterward, Piper tells Savage that “(his) ass is mine.” Savage wants Piper TONIGHT, but Hogan interrupts with derogatory insults. Afterward, Hogan bestows Elizabeth upon Bischoff who plants one on her. In the meantime, Hogan alludes to Savage’s alleged use of Viagra.

Savage tells Elizabeth that he “got over (her) a long time ago” but will “never get over (Hogan).” Following that, he blasts Piper. While Hogan and company cackle, Piper retaliates against Savage to close out the segment.

Did I just hear something about DDP’s decision? Is THAT what the “main event” is?

We revisit last week when Jericho toured DC to seek his precedent followed by his confrontation with Malenko. Hopefully, he stopped for some Bert’s chili.

Summary: Once again, the Detroit faithful sat through another match they didn’t want to see.

After the match, Malenko yells at the camera: “Jericho, right here!”

At the entrance, the Nitro Girls dance in red and silver.

THE FOLLOWING ANNOUCEMENT HAS BEEN PAID FOR BY THE NEW WORLD ORDER:

Big Poppa Pump meets Carl Weathers thanks to Hogan who’s made up for his role in Assault on Death Mountain. Shannon Tweed makes a cameo.

THE PRECEDING ANNOUCEMENT HAS BEEN PAID FOR BY THE NEW WORLD ORDER.

When we return to the luxury suite, Hogan welcomes BPP to the party/nWo Hollywood.

When we return from commercial break, the Detroit faithful chant “Gold-berg.”

Match 7 for the WCW US title: Goldberg (champion) versus Chavo Guerrero, Jr.

Summary: The sole match that meant anything to this crowd, and Goldberg was allegedly 99-0.

nWo Wolfpack returns to the ring, and Nash calls out DDP. When DDP emerges, he requests that Schiavone interview him at the entrance. Will he join the Wolfpack?

DDP refers to Hogan as “scum,” and is just about to join, yet Hogan and Rodman jump him from behind. Rodman WHACKS DDP SO HARD that an audible pop from the chair is overheard. OUCH! After Hogan and Rodman decimate DDP with chairs, Sting and Konnan come to DDP’s aid. DDP writhes in pain as the Detroit faithful chants “Hogan sucks” to end the show.

Conclusion: Too. Much. “Hollywood” Hogan. Too. Much. Talking. Not. Enough. Wrestling. Where’s. The. Main. Event? While WCW got tons of publicity for having Rodman skip practice to attend its show, they did diddly-squat in the ring minus the obligatory Benoit-Booker T match.

While I have zero foundation of proof, I firmly believe that Hogan tore up tonight’s format and hosted his own version of Nitro thanks to his creative control card. Bischoff, having ZERO power to overrule him, granted him this turd. Seek out Benoit-Booker T and avoid the rest like the plague.