Who will be Nash’s partner in the co-main event? What will be the blockbuster main event? Also, what does Jericho have in store for us? Let’s find out!

Nitro Girls dance in silver and black with Fyre doing her best impression of Ultimo Dragon.

We revisit last week’s Thunder when Nash and Hogan argued about hitting Savage.

Summary: Four minutes of workrate and high-flying before the abrupt halt.

After the match, Giant chokeslams Bloom, Rage, and Kaos in succession. He grabs the microphone and informs Piper that he’s “mean.” Let’s just hope he doesn’t say he’s green; otherwise, he’d be a frozen vegetable.

In the ring, “Mean” Gene Okerlund interviews “Rowdy” Roddy Piper. The Chicago faithful is ELECTRIC! As Piper wears a Cubs hat, he and Giant approach the ring. Practically, the first words out of Piper’s mouth are “God bless Harry Caray.” Piper is nowhere near my favorite wrestler, but I love him just for that. Regardless, Piper talks nonsense while shilling the bat match at the PPV. He then compares Nash to the Titanic. Big with lackluster stamina? Yes, I can see the comparison.

Next, he teases Nash and Hogan about their relationship and announces a match featuring Sting and Luger versus Nash and a partner not named Hogan. He exposes Disciple as “E. Harrison Leslie,” and challenges Hogan for a match TONIGHT. Kayfabe, what’s that? WCW refuses to insult your intelligence. At least this time.

Since WCW believes that its fans don’t watch Thunder, they replay the full Nash-Hogan conversation. Give us recappers a break!

After the match, Saturn calls out Goldberg.

STARBURST ROAD REPORT: Scott Hudson revives the segment formerly orchestrated by Lee Marshall and identifies Tampa, FL as a hotspot for WCW this Thursday despite the lack of TV trucks.

Eric Bischoff leads Hogan and the nWo to the ring. As Hogan challenges Piper, he calls Leslie his “Disciple.” He then mentions Nash and states “I don’t trust you.”

Suddenly, Nash emerges and heads to the ring. Hogan refuses to allow Nash to have an nWo member as a partner, but Nash doesn’t mince words. He has a partner but won’t reveal who it is.

Want a PP-listen? WCW has Malice at the (Ice) Palace on Thursday. 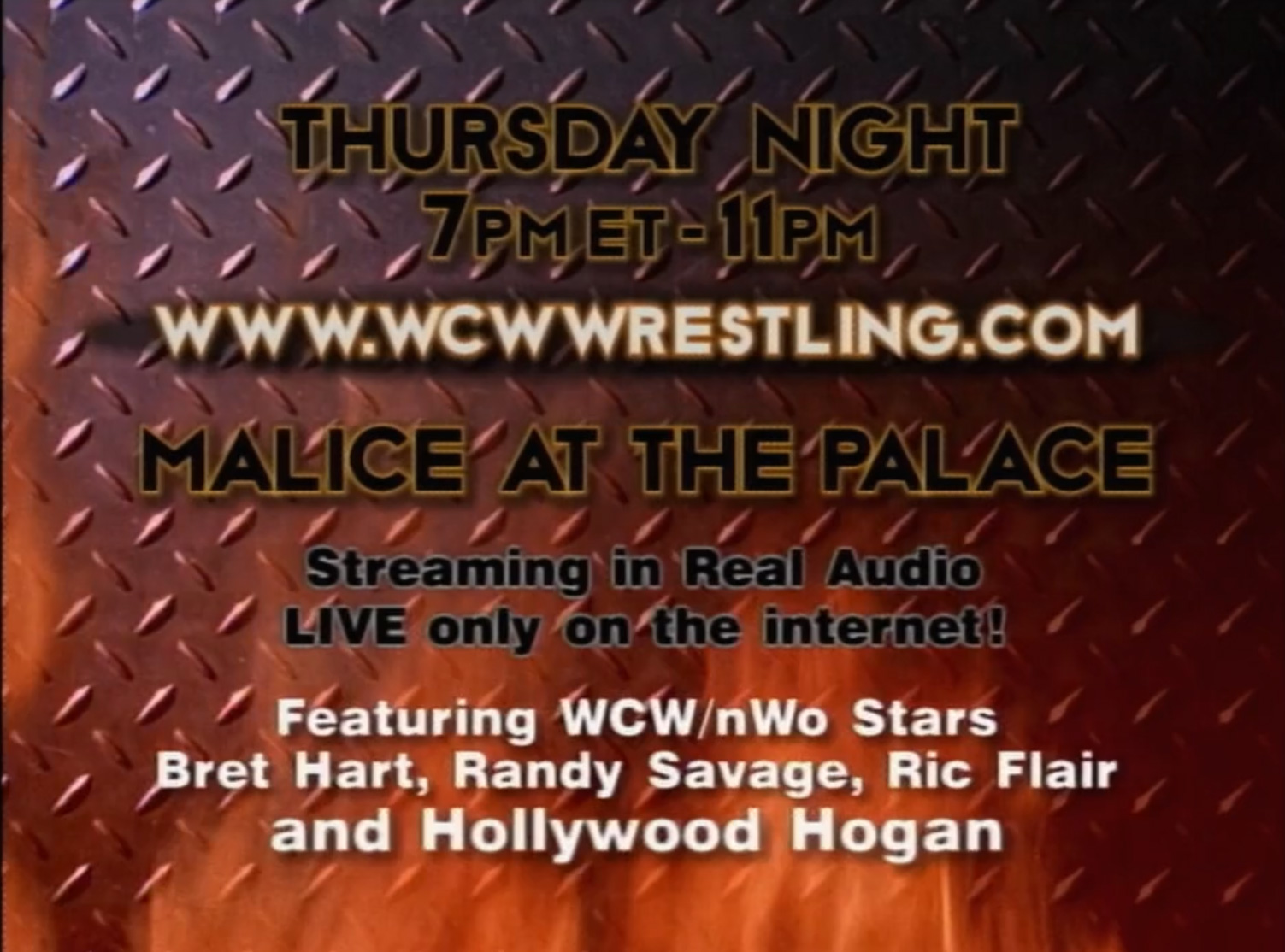 At the entrance, Nitro Girls dance in neon while Schiavone shills the Nitro Party contest.

Prior to the next match, Jericho dedicates it to the “memory of Dean Malenko” before running him down. He’s home playing daddy, not dead.

Summary: Showcase match for Jericho who played defense until the end.

After the match, Jericho brings some paperwork and a beverage into the ring. Upon finishing his refreshment, Jericho has a LIST of 1,004 wrestling holds from a dot-matrix printer. Even in 1998, that was old school. 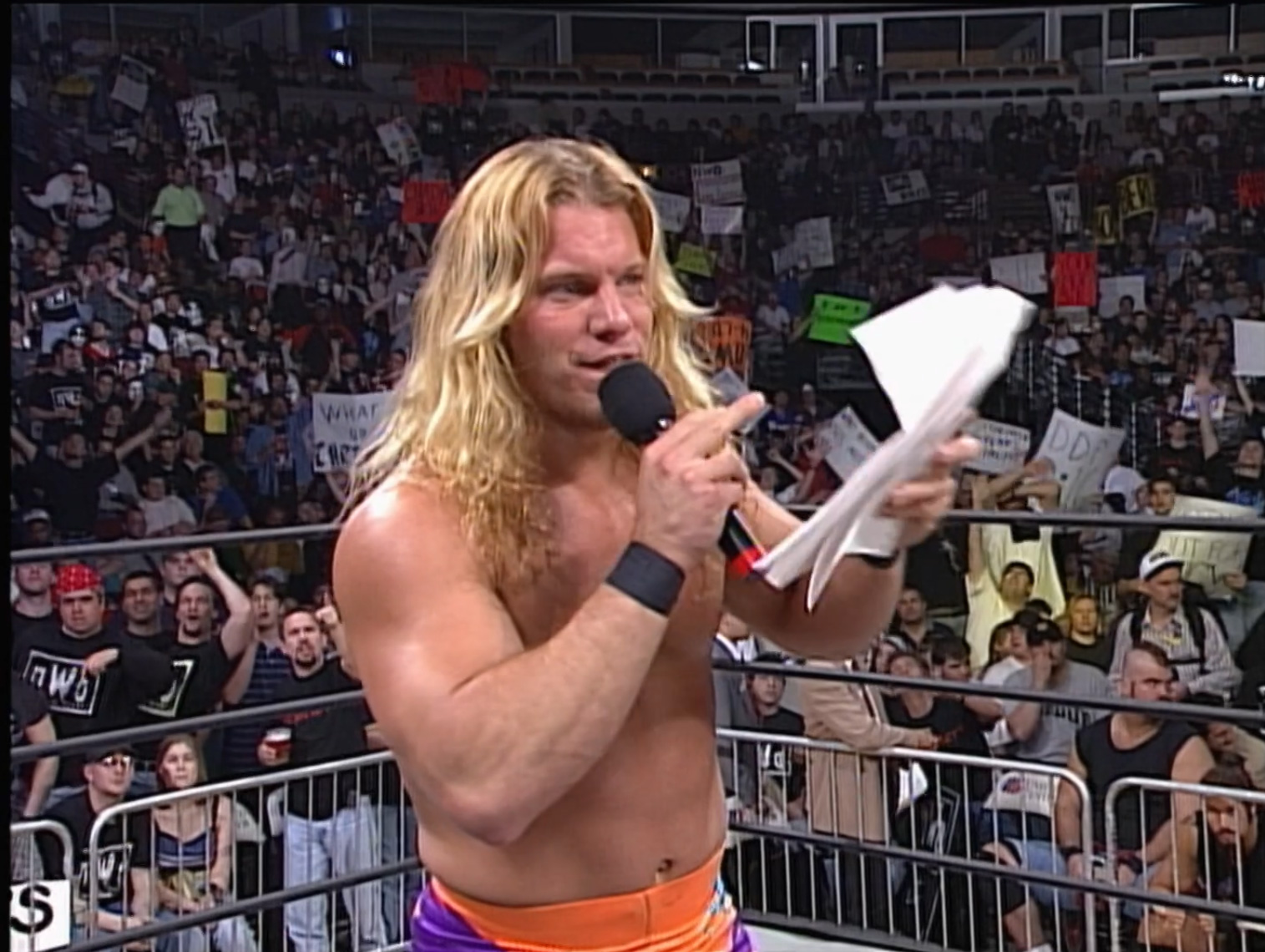 As the second hour begins, Jericho continues his list much to the chagrin of the Chicago faithful.

Summary: Showcase match for Iaukea who has ONE move.

Among the Chicago faithful, the Nitro Girls dance in silver. 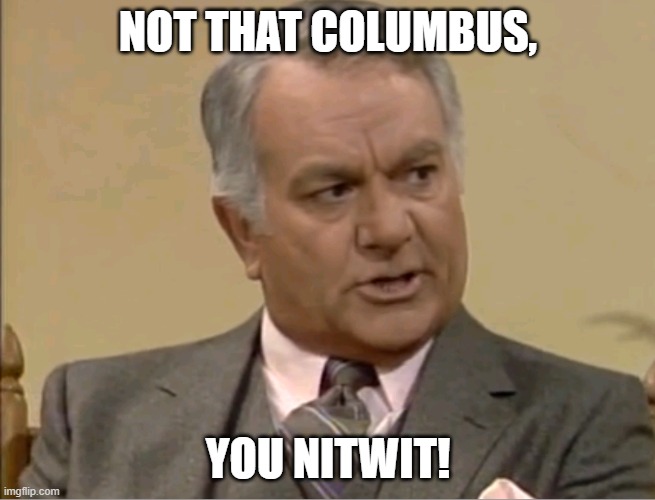 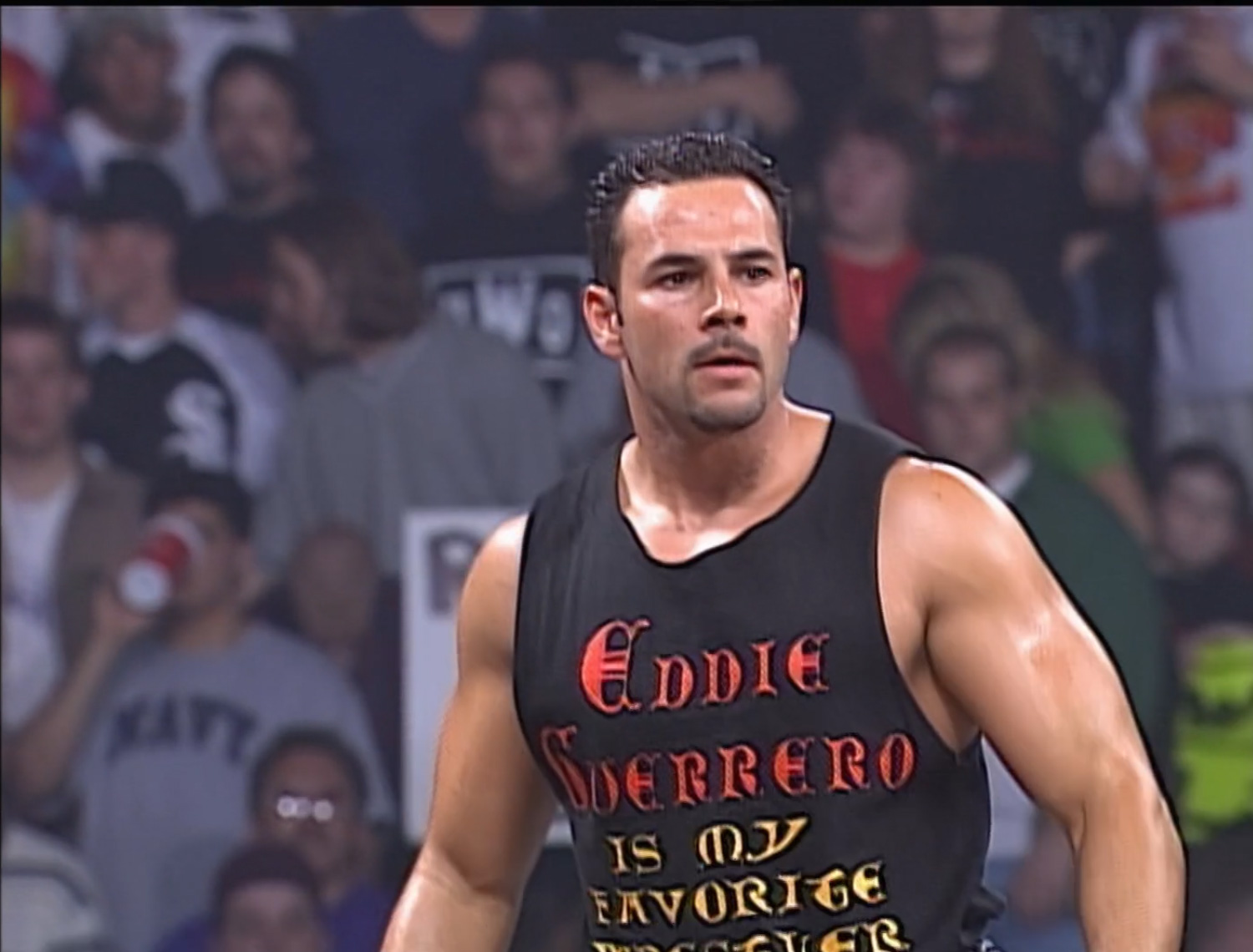 Summary: The botch didn’t hurt the match, but the Chicago faithful hit the concession stands for Italian beef.

Prior to the next match, Raven holds the US title belt overhead, slumps in the corner, and cuts a promo on DDP. He extorts his colorful resume and his prior benevolence to DDP. As he continues about his days in “barbed-wire city,” he informs DDP that a ticket to WCW would have been welcomed, but none came forth. He mentions “the Snake” in reference to Jake Roberts. For those unaware, Roberts sued WCW in 1992 for backpay and could not be rehired.

Summary: More storyline than match for the Raven/DDP feud.

After the match, DDP joins the broadcast table to cut a promo on Raven. First, he acknowledges that he and Raven “helped each other.” Second, he calls Raven “Scotty” and reveals that Raven had a privileged childhood. Third, he discusses his childhood which wasn’t pretty. Fourth, he describes hardship as “working a 9-5 job that he hates (and) go(ing) to the next job that he hates more just to make it all work.” Also, hardship is “the mom whose old man ran out on her and her 2-3 kids.” Vivid promo with a touch of breaking kayfabe. 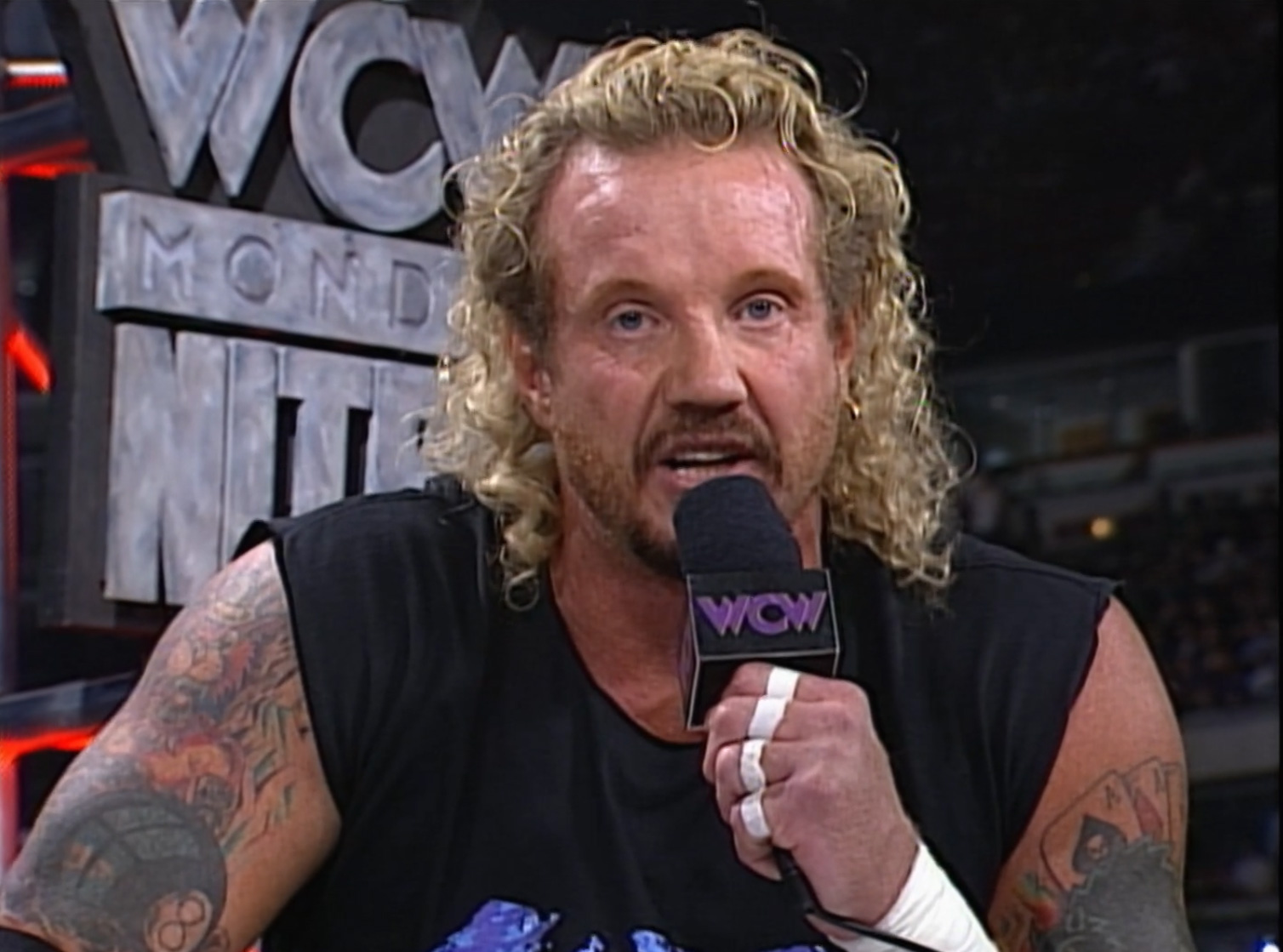 Summary: Showcase match for Disco, but Kidman’s coming along.

Summary: More shenanigans between Rude/Hennig and the (WCW can’t call them) the Hart Foundation.

Following that, Adams clocks Dickinson, but Bret hits the ring to clear out the nWo. He grabs the microphone and crows about getting screwed. Again? He needs to leave Julie alone sometimes, ‘cuz he’s just bragging. Anyway, he vows to tear down the nWo “brick by brick” and warns Hogan. A Hogan-Bret match certainly would be PPV-worthy.

Summary: The pieces are coming together for these two as they fight to another draw. Unfortunately, due to the lack of a finish, the Chicago faithful were NOT pleased and voiced it quite frankly.

Nitro Girls dance at the entrance in neon tops and jeans.

Summary: Fun while it lasted, but the Psicosis-Flock feud continues.

After the match, Dragon assists Psicosis with fending off the Flock, and they double-dropkick Riggs.

Summary: Showcase match for Goldberg. For those unaware, this was Traylor’s last match in WCW except for a squash against Bret Hamner.

After the match, Saturn staggered over the steel railing to challenge Goldberg, but the Flock restrained him.

Summary: Entertaining match with great star power albeit lacking in any scientific wrestling. According to Meltzer, Sting suffered a “legit hip injury.”

After the match, Piper emerges and attacks Hogan. Disciple helps Hogan, and they all fight to the backstage area.

Summary: It wasn’t a match but merely a brawl.

Afterward, Disciple delivers an Apocalypse to Piper, and Hogan sends Patrick flying over the top rope to the floor. Nash jogs to ringside and garbage flies into the ring. 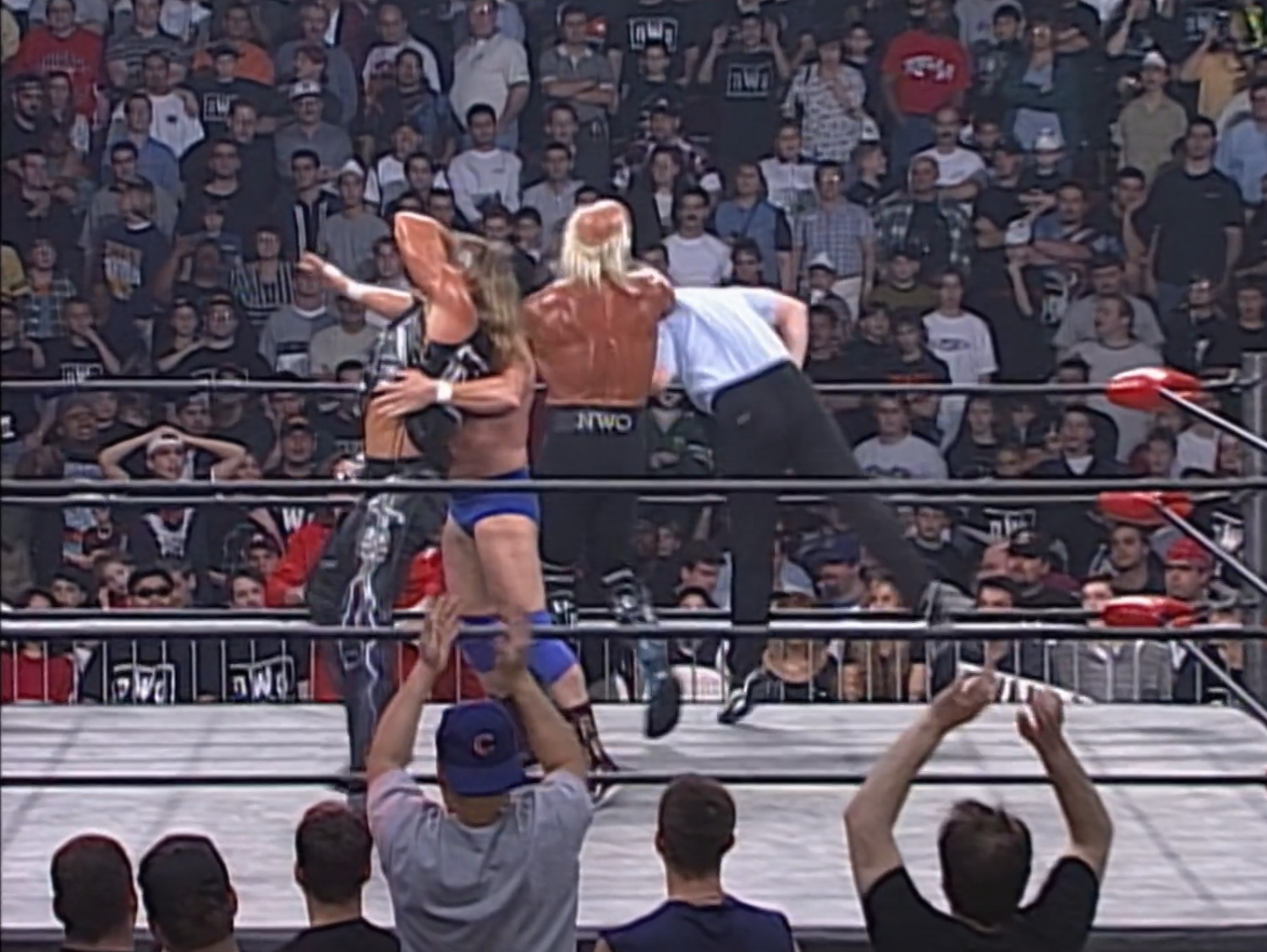 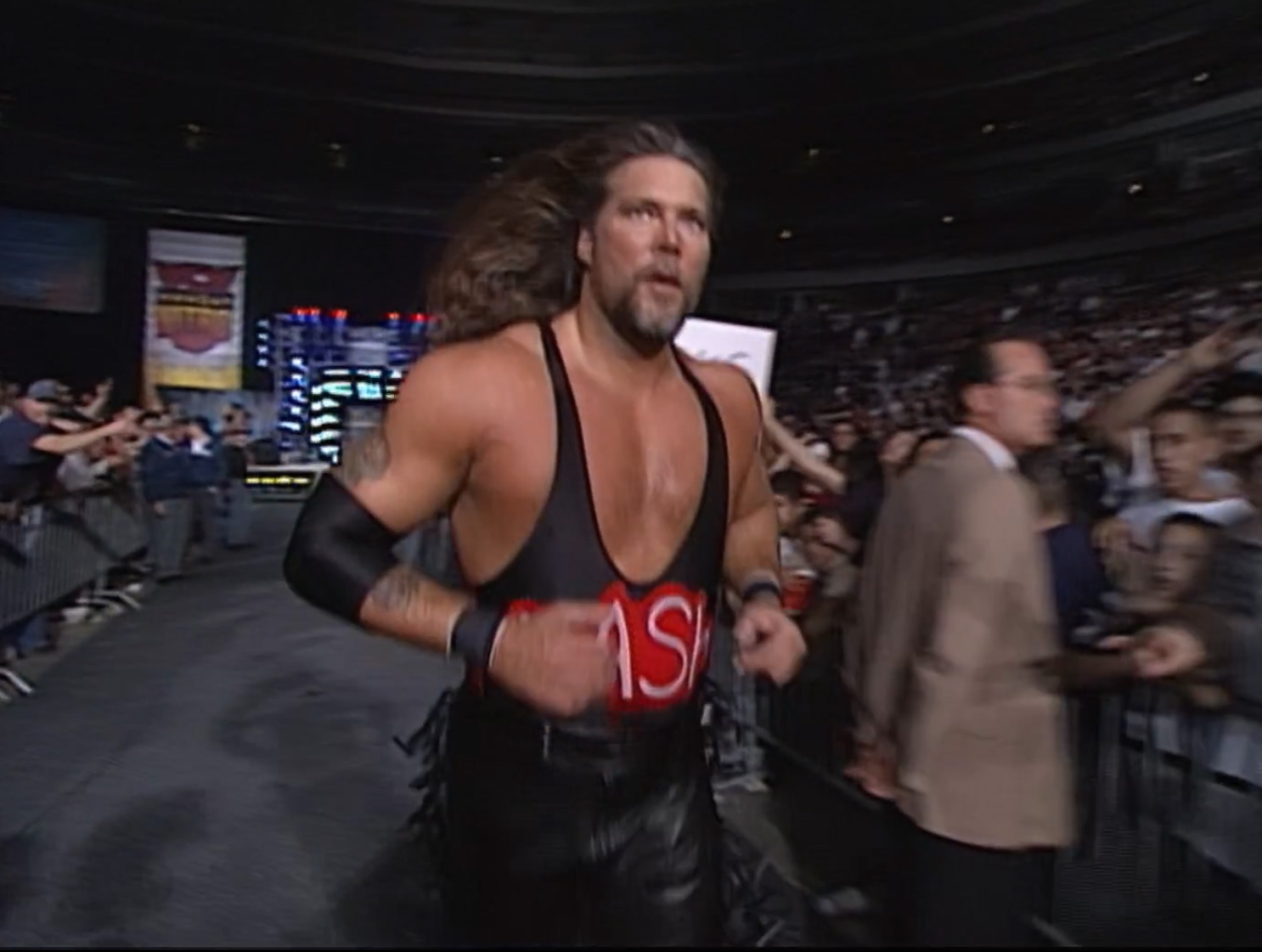 As Nash stands Piper up, Hogan aims for Piper but nails Nash instead. Nash shoves Hogan, but Giant approaches ringside. As Giant enters the ring, Nash, Hogan, and Disciple scatter like flies. Giant and Piper stand in the ring while Nash and Hogan jaw at one another to end the show. 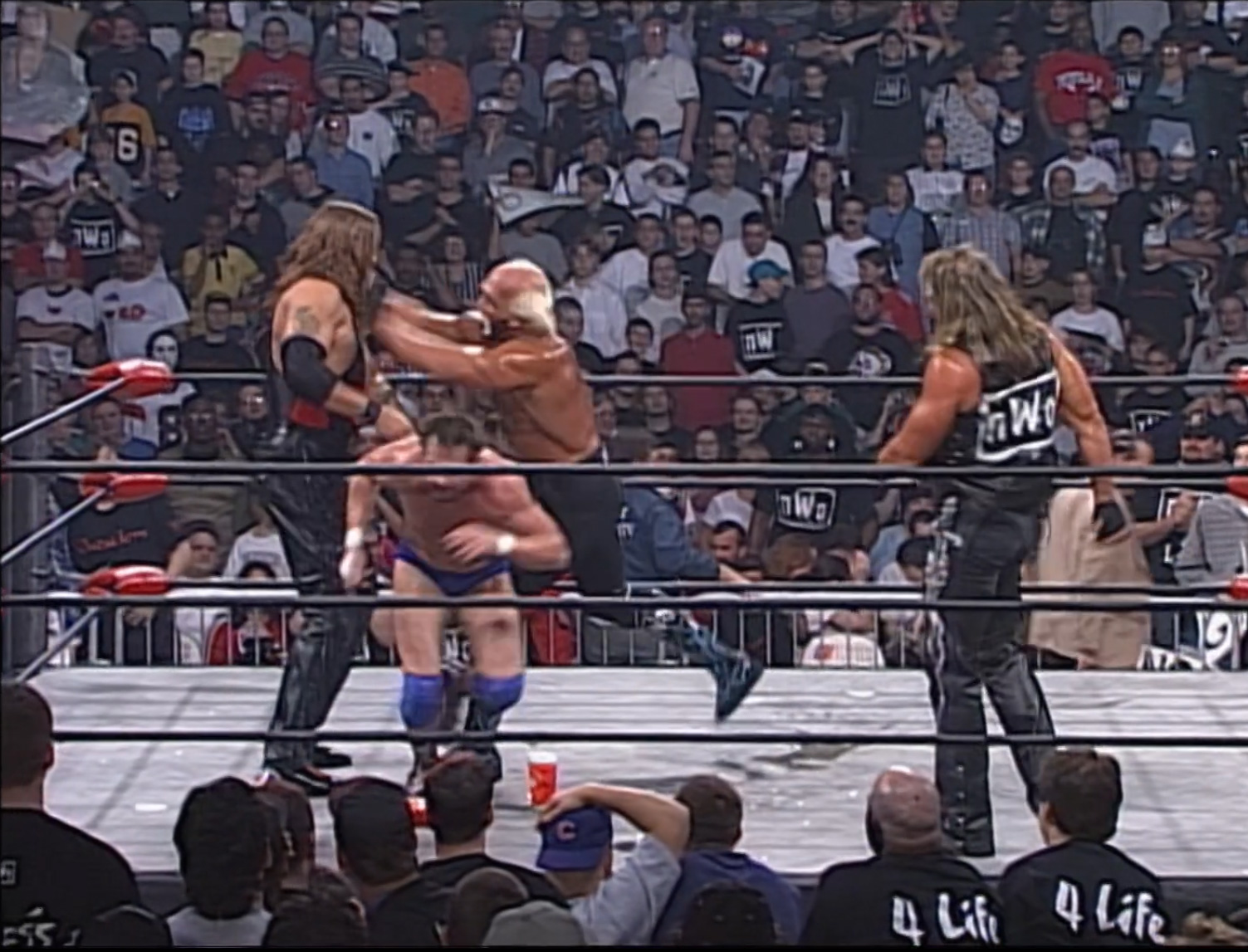 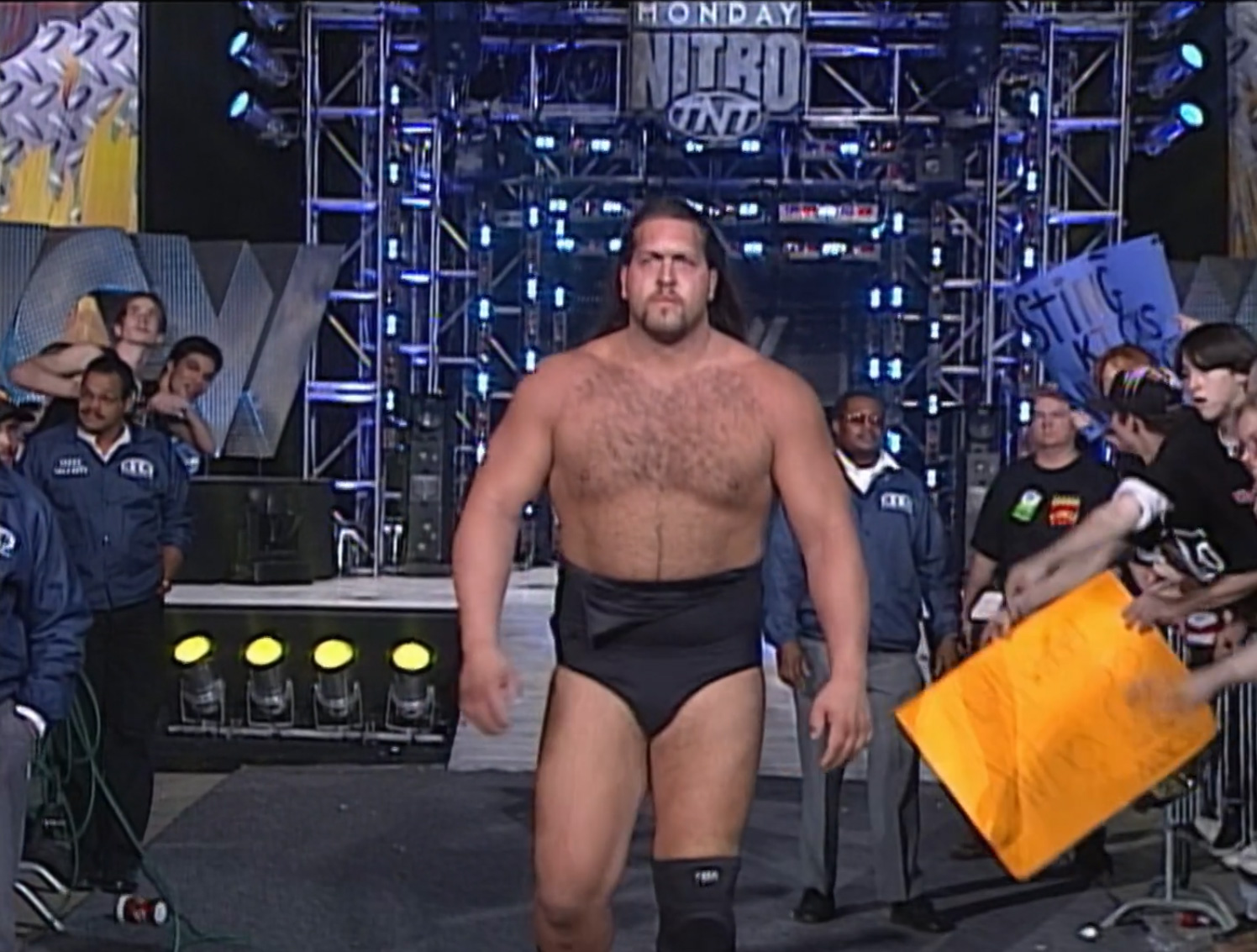 Conclusion: Absolutely STACKED show as WCW felt the pressure from a successful WrestleMania. I’m genuinely surprised that they didn’t have a title change of some sort to put it over the top. Nonetheless, the co-main events, Jericho’s character work, and DDP’s promo make this a must-see.