Who will Rock face in the main event? What are DX and Mike Tyson up to? What level of destruction will Kane inflict upon us this week? Let’s find out!

Austin approaches the ring, and Kevin Kelly interviews him. While Austin informs Vince McMahon that he “can’t be molded,” he wants to beat Michaels’ “ass” at the PPV this Sunday. He then wonders if Kelly is insulting him and asks the Tucson faithful to give him a “hell yeah.” As you’d expect, they comply. Austin mentions “having the night off” and “drinking Steveweisers,” but Commissioner Slaughter enters the ring to advise him that Austin will wrestle the Rock TONIGHT.

When Austin calls Vince a “chicken,” Slaughter threatens to change his match with Michaels at the PPV into a non-title contest. Austin feels threatened and supplies Slaughter with a Stone Cold Stunner to a big ovation.

Prior to the opening match, we revisit last week’s episode when Charlie and Cactus ensured that Road Dog was well-hung.

Summary: More storyline than match as the tag title match at the PPV receives some attention.

After the match, Road Dog joins the fray and BRAINS Charlie with a champagne bucket. He launches the card table into the ring and hits Charlie. Billy then mounts the second turnbuckle and breaks the table over Charlie’s head. OUCH! Next, Road Dog tosses a steel chair into the ring, and the NAO spike-piledrives Cactus onto it. Heinous!

BOP-IT SLAM OF THE WEEK: Michaels hits the ring and provides Austin with Sweet Chin Music.

Summary: Jarrett’s been on a roll since obtaining Lee as a manager, but Blackman’s undefeated streak has been broken. Also, Lee prevents Blackman from kicking out to add more old school heel psychology to the match.

After the match, referee Jack Doan enters the ring to advise Korderas about the shenanigans. Lee shoves Jarrett into Doan knocking him OUT COLD. Blackman then snap-suplexes Jarrett and lands a bicycle kick. Lee gets out of dodge before Blackman could turn out his lights.

For those in the Boston market (mmm…chicken), a DeGeneration-X public workout will occur on Thursday at noon at Faneuil Hall Marketplace. I hope there’s green beans and stuffing to go with the chicken. 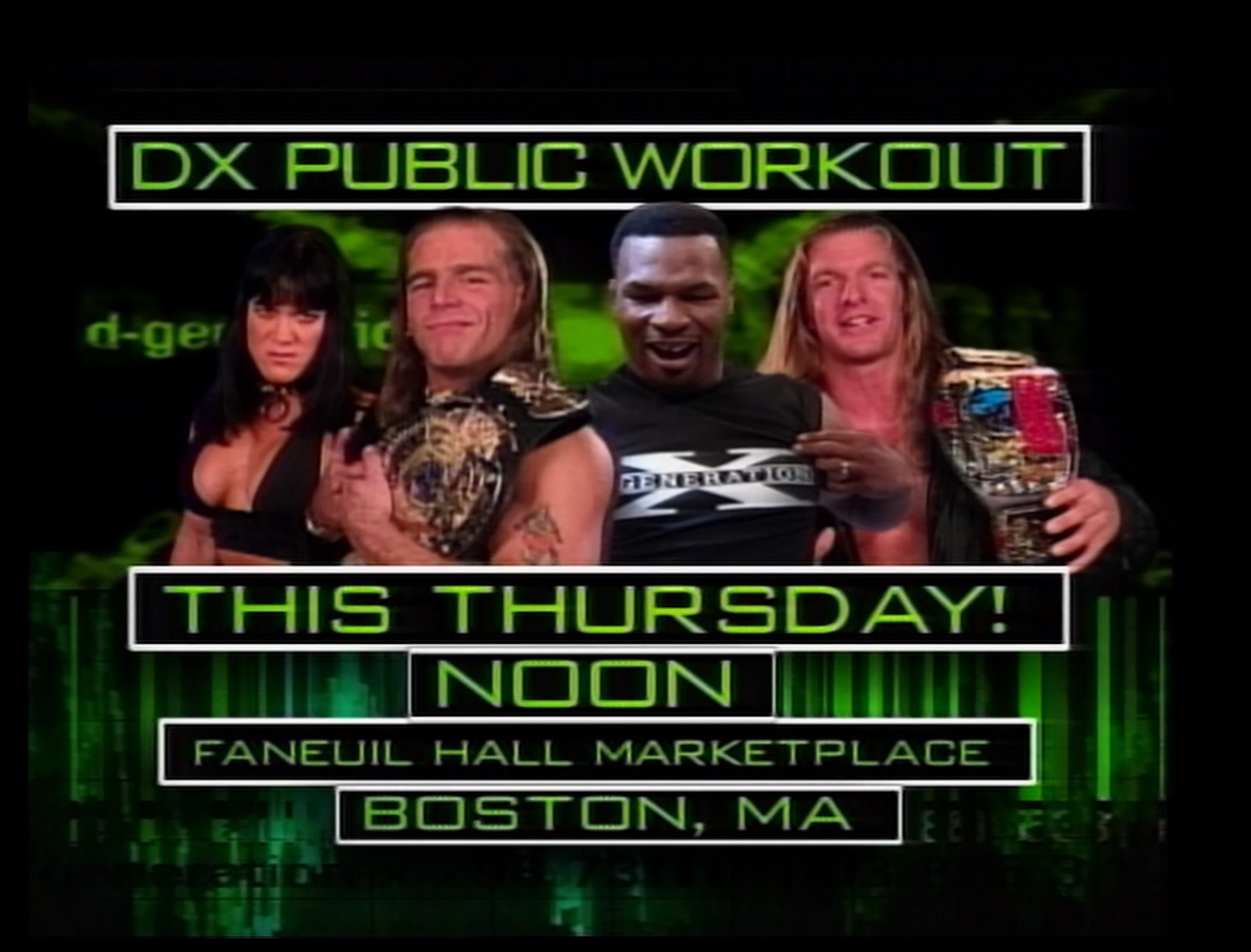 A white limousine approaches the arena, and DX including “Iron” Mike Tyson exits.

We then revisit last week’s episode when Kane DECIMATED the Phoenix Suns’ gorilla mascot. Afterward, he sauntered after an injured Sable until Undertaker cuts a promo on him from atop the Titantron.

At the “graveyard,” Undertaker speaks to his parents about facing his “brother” Kane at the PPV.

RAW is sponsored by 1-800-COLLECT, WWF: The Music: Volume 2, and Jakks action figures.

In the arena, Kane and Paul Bearer walk to the ring, and Bearer cuts a promo on Undertaker. Kane sets off fireworks, but the Tucson faithful isn’t impressed. He then increases the voltage at the broadcast table causing a mini-explosion and destroys a spotlight. Finally, he sets crew member Hunter Brown on fire. Evil! 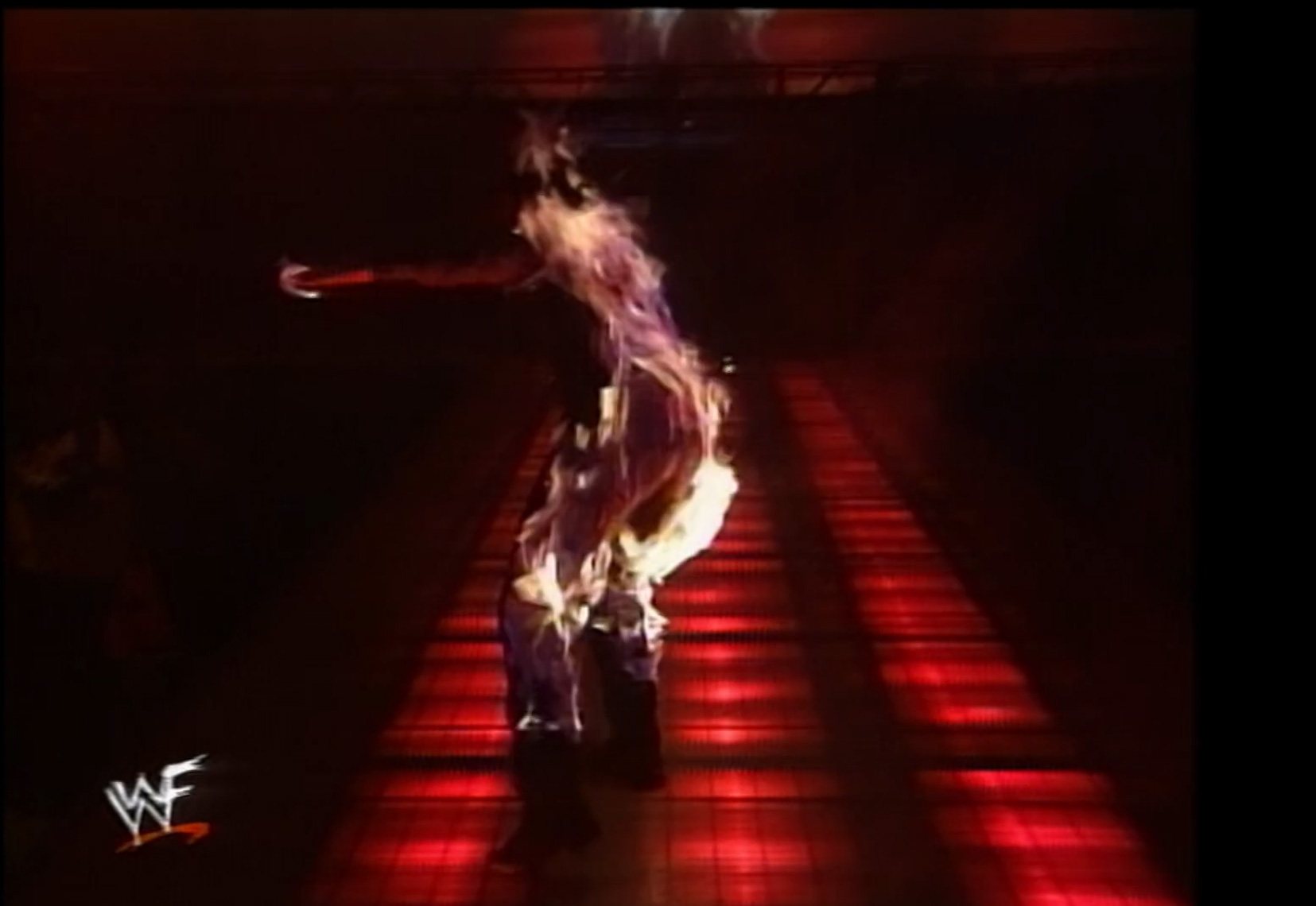 We then revisit last week’s episode when the NEW Midnight Express destroyed the Rock’n’Roll Express.

Match 3: The NEW Midnight Express (w/ Jim Cornette) versus the Disciples of Apocalypse

Summary: Mere backdrop for the 15-team battle royal on Sunday. Where are the Road Warriors?

Tyson and DX are in the ring, and we revisit last week’s episode when HHH stole the European title from Owen. HHH cuts a promo on Owen and informs us that Chyna will be handcuffed to Slaughter (a.k.a. “the chin”). Michaels picks out a woman wearing DX on her top but calls her a “skank.” As he cuts a lengthy promo on Austin, Michaels doesn’t appreciate McMahon’s “support.” Tyson will “knock (Austin)…out” if he gets in his way. 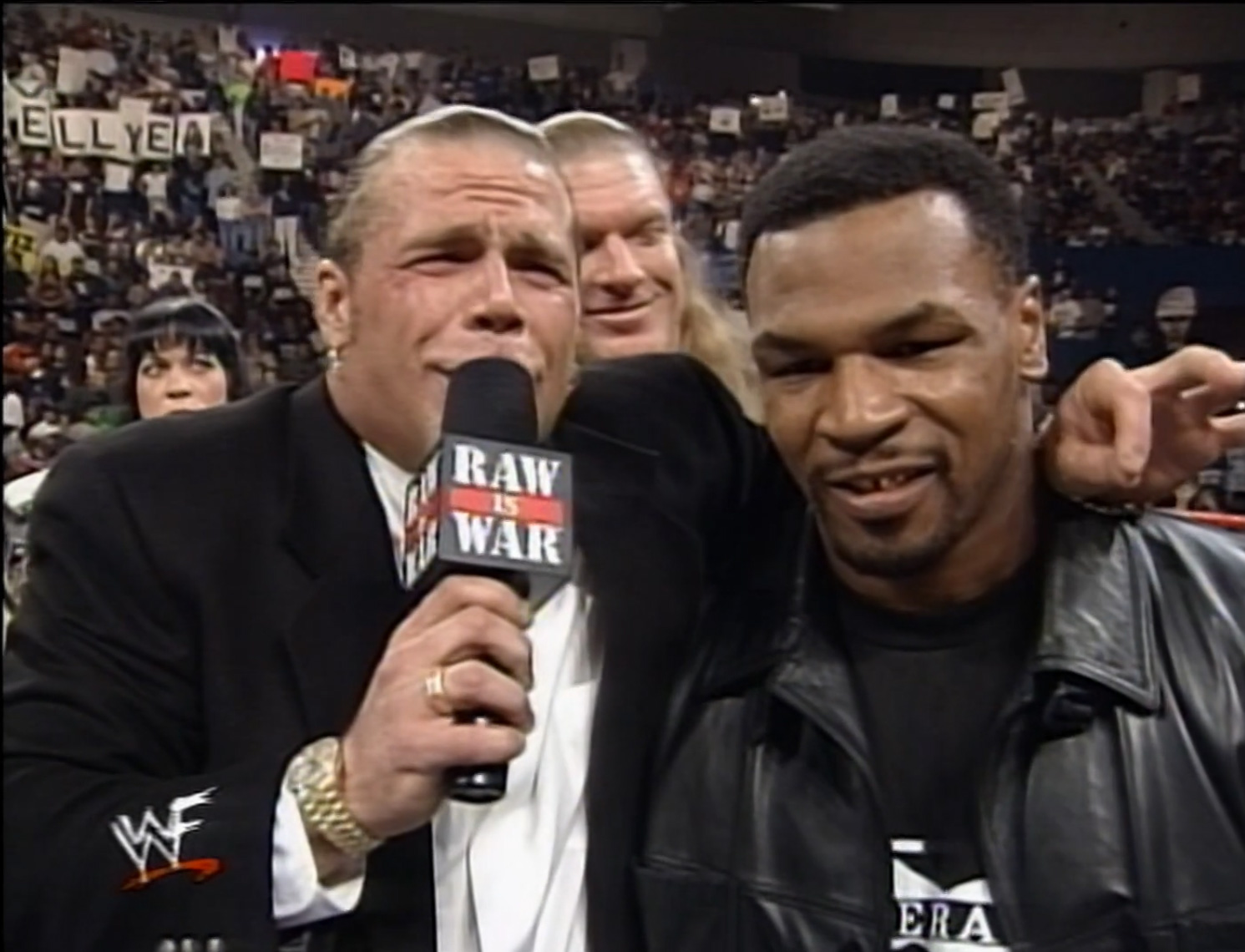 Gennifer Flowers encourages all of us to be proud WWF fans. After all, wrestling is incredibly popular.

We then revisit last week’s episode when the Rock knocked Shamrock into the middle of 1999 with a SICK chair shot. JR then mentions that the DQ rule has been waived for the IC title match at the PPV.

Match 4: Faarooq (w/o the Nation of Domination) versus Chainz (w/o the DoA)

Summary: Storyline match to progress the Rock and Faarooq story. Was the chair shot inadvertent? You decide!

After the match, Faarooq is OUT COLD, and the NoD approaches the ring to assist him. They carry him backstage while the Rock has a smug look on his face.

Summary: While I understand that Bradshaw is a hoss, he needs more than clotheslines and lariats to get over.

After the match, the Rock’n’Roll Express slither between the Tucson faithful, and the Midnight Express help Windham to triple-team Bradshaw.

WRESTLEMANIA MILLENIUM MOMENT: Muhammed Ali was the outside enforcer for the main event at the inaugural WrestleMania in 1985.

Marc Mero accompanies Sable to the ring for her special moment. As Vince Russo joins them in the ring, Kelly mentions that Sunny cannot be here tonight due to being “under the weather.”

Nonetheless, Russo awards Sable a plaque for making the January 1998 edition “special.” Sable offers her acceptance speech, but Goldust and Luna spoil the party. Luna grabs the plaque,WALLOPS Sable with it, and rips her evening gown. Nefarious! Like a gentleman, Russo removes his jacket to cover up Sable as Mero returns to protect his wife. 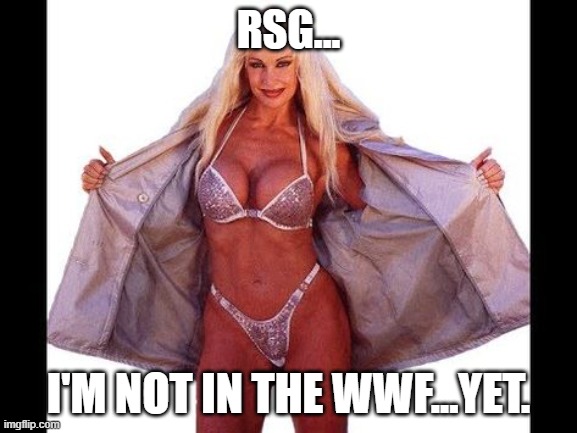 Summary: With the crowd firmly with Austin and against Rock, the match told a great story.

Afterward, D’Lo Brown tries to crown Austin with a chair but eats a Stunner instead.

Suddenly, DX’s music hits, and they emerge through the entrance. Michaels promises to turn Austin’s lights out “for the last time.” He then walks down to the ring, but HHH restrains him.

Conclusion: With a blockbuster main event and the episode showcasing all matches for WrestleMania XIV, you MUST see this. Although the Jarrett/Bradshaw/Midnight Express stuff isn’t must-see-TV, the rest has some flavor for everyone. Enjoy!

Who won? Nope, Nitro, with its own blockbuster main event, destroyed RAW by a whole point. Since the WWF can’t have Tyson on TV each week, they’ll have to find something else to put eyeballs on their product to beat Nitro. Perhaps WrestleMania XIV will have a moment to remember and shift the wrestling audience. What do you think?