What special announcement does Piper have for us? Can DDP defeat Sting to become World champion? How will Benoit fare against Booker T? And what does Jericho have in store for us? Let’s find out!

In the cold open, “Mean” Gene Okerlund interviews “Rowdy” Roddy Piper who proclaims “God bless Harry Caray.” For those unaware, Caray died in February 1998, so Piper namedrops him to be “hip.” He then declares “no more bats in…WCW…at all…until (the PPV)” when he and Giant have a “bat match” against Nash and Hogan. Next, he books Giant versus Nash TONIGHT. When he turns his attention to Savage, he refers to his relationship with Hogan as “ex-lovers.” HA! Finally, he books himself against Savage. Wow! 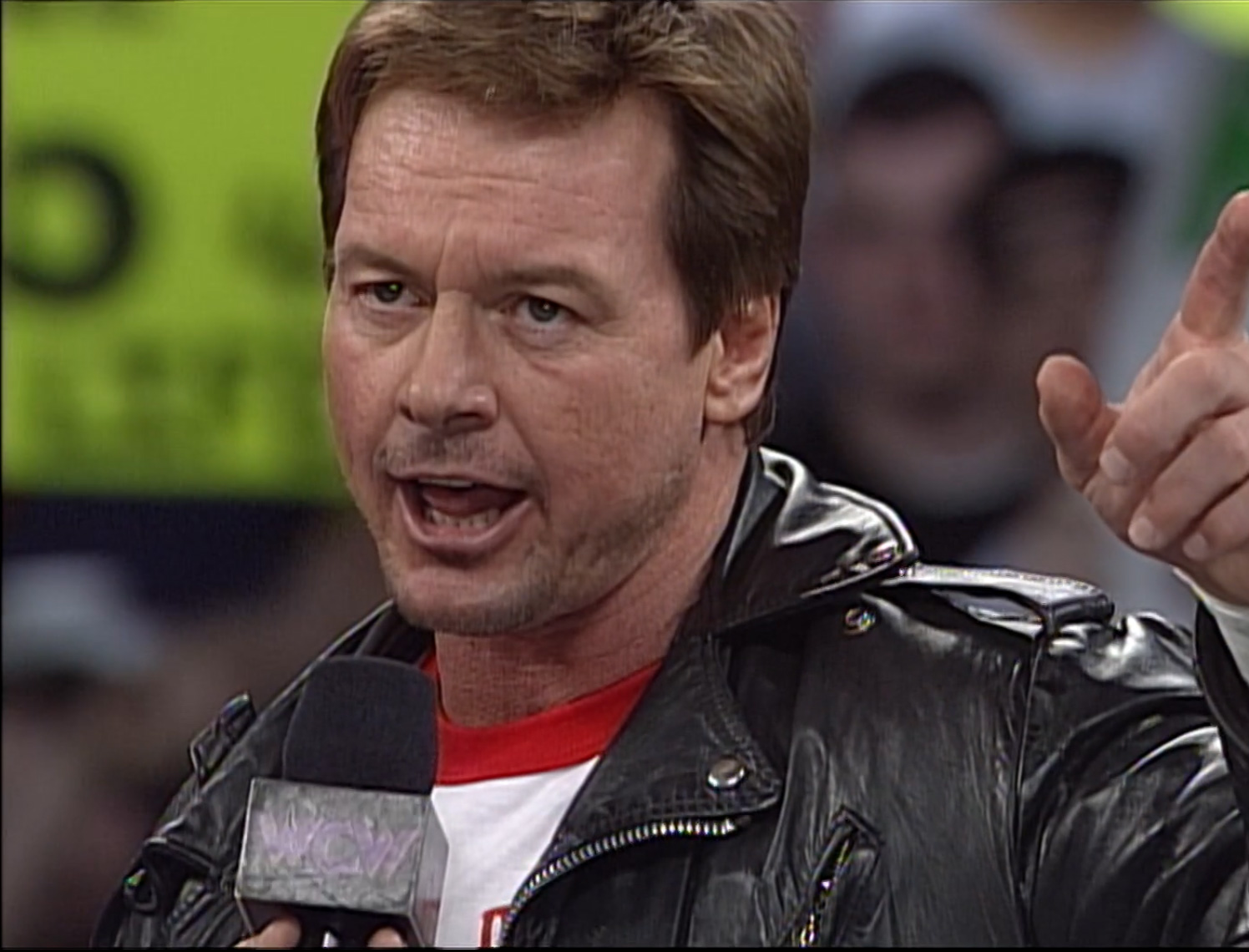 At the entrance, the Nitro Girls dance in silver and black.

While Schiavone details the goings-on within WCW, Zbyszko stands up to appreciate his kudos. 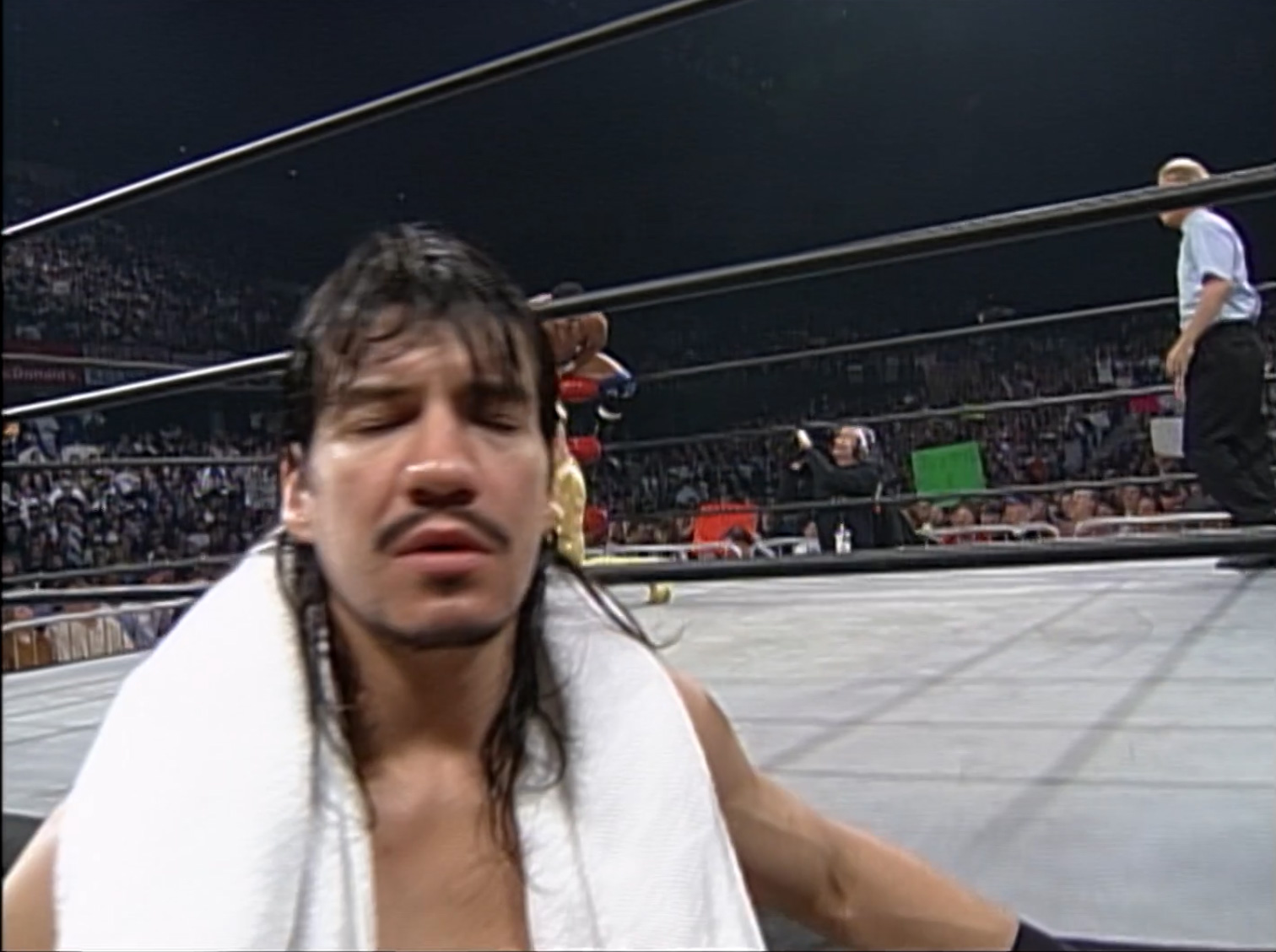 Summary: Showcase match for Dragon. According to Meltzer, Dragon hadn’t been thrilled about his status within WCW, so they threw him a bone.

After the match, Okerlund interviews Eddie and Chavo. Eddie is “embarrassed” about Chavo and apologizes for him. As he instructs Chavo to “apologize to Grandma,” Chavo reluctantly complies.

Bischoff leads Hogan to the ring, and Hogan cuts a promo on Giant and Piper while adding himself to the Giant/Nash match.

Summary: Showcase match for Psicosis. According to Meltzer, Lodi legitimately broke his ankle during the moonsault. OUCH!

Summary: Fantastic match with plenty of psychology, and the Louisville faithful ate it up with a spoon.

After the match, Sting picks DDP up off the mat, props him up in the corner, and offers the Louisville faithful the Diamond Cutter sign. He and DDP then embrace to punctuate a heckuva title match.

Nitro Girls danced at the entrance in white, and Michael Swiggler from Broken Arrow, OK is this week’s Nitro Party pack winner.

Summary: Hayashi may have some dazzling high-flying moves, but Eddie’s got the whole package.

After the match, Eddie makes Chavo raise Eddie’s arm. Dragon checks on Hayashi and shakes his head about the family drama.

Prior to the next match, a vignette highlighting Konnan airs. Meanwhile, I get some popcorn.

Prior to the next match, Jericho, wearing a WCW Monday Jericho t-shirt, wishes Stanford success against the Kentucky Wildcats to generate heel heat. Lane enters the ring and distracts Jericho. While Lane informs him that Jericho owes him $1000 for the stunt against Malenko on Thunder back on 3/12, Jericho accuses him of stealing some of his gear along with his Loverboy tape. HA! He then advises Lane about owing him $1000 because he “can’t get the smell out.” HA! Lane slaps Jericho to begin the match.

Summary: Showcase match for Jericho whose charisma is off the charts.

Summary: Mere appetizer for the bat match at the PPV.

After the match, Disciple attempts an Apocalypse, but Giant blocks it. Bischoff unleashes some kicks, but they don’t faze Giant. When Disciple hightails it, Giant chokeslams Bischoff to a HUGE ovation.

At the entrance, Nitro Girls dance in white.

Summary: Bogus finish aside, this match told a great story with workrate and psychology.

After the match, Hennig and Rude double-team Smith until Bret hits the ring to save his brother-in-law. Upon providing Rude with an inverted atomic drop, Bret locks Hennig in a Sharpshooter. Brian Adams sprints to the ring along with Konnan, Norton, and Vincent. While Bret fights them off, WCW Security Director Doug Dillinger unlocks the handcuffs. Bret then grabs the microphone, rebuts the “Bret screwed Bret” argument, and seeks justice for everyone.

We revisit Thunder when Goldberg came to Rick Steiner’s aid. 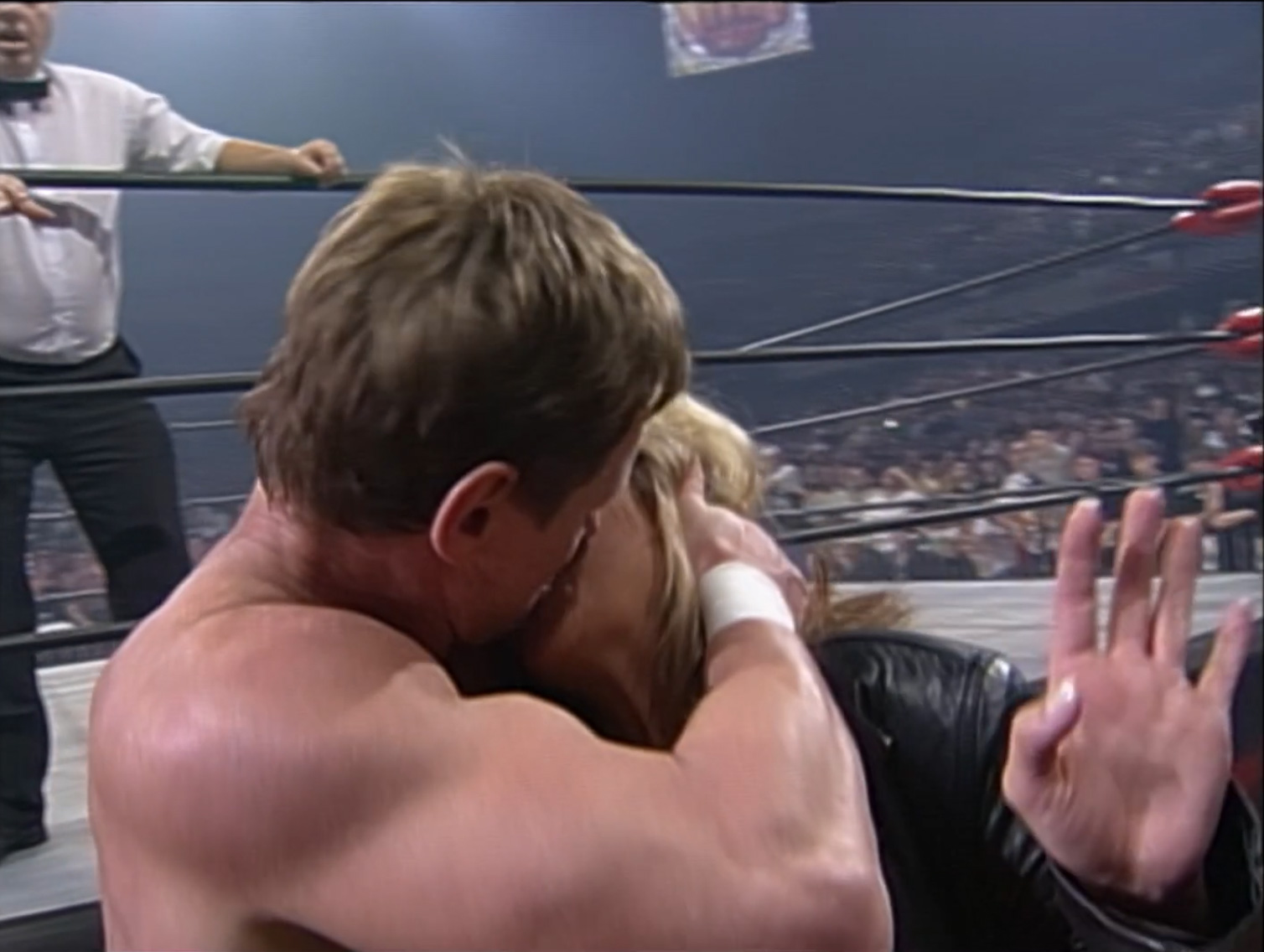 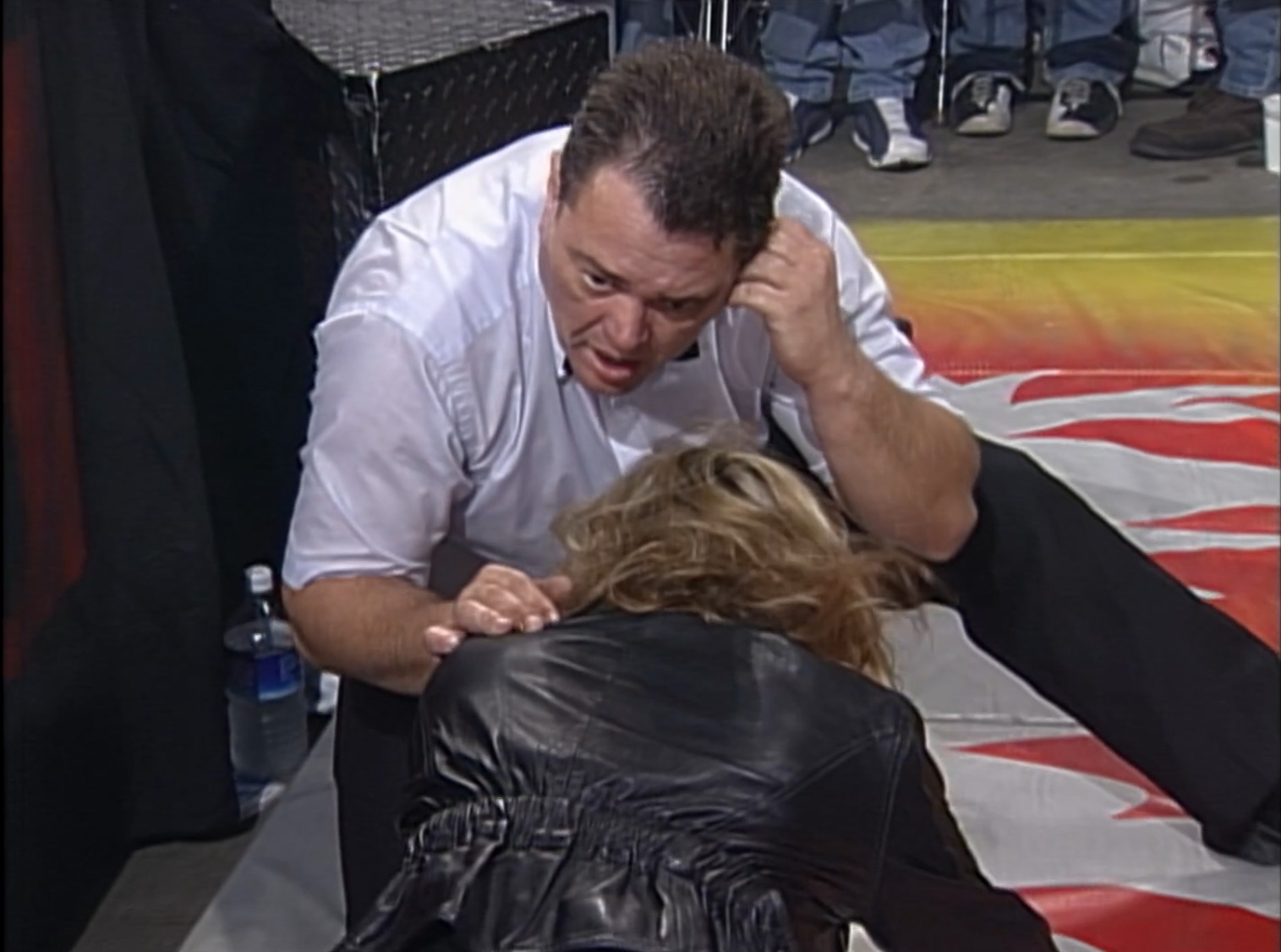 Summary: More storyline than match as the Hogan/Savage feud continues.

After the match, Nash joins Hogan with a bat and tries to clobber Piper. Hogan stops him, and a shoving match ensues. While Sting joins the fray with his own bat, the nWo cowers in the corner. 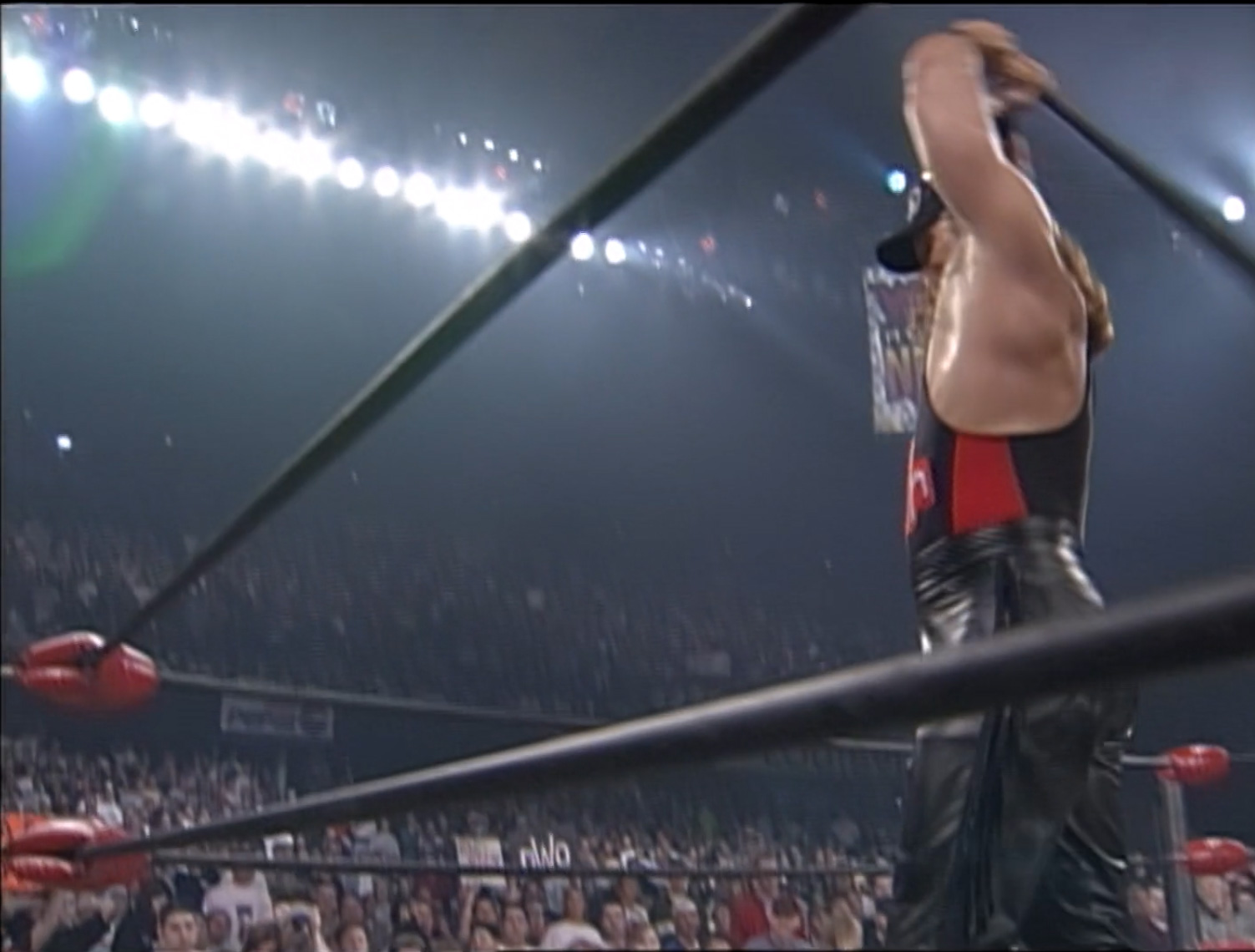 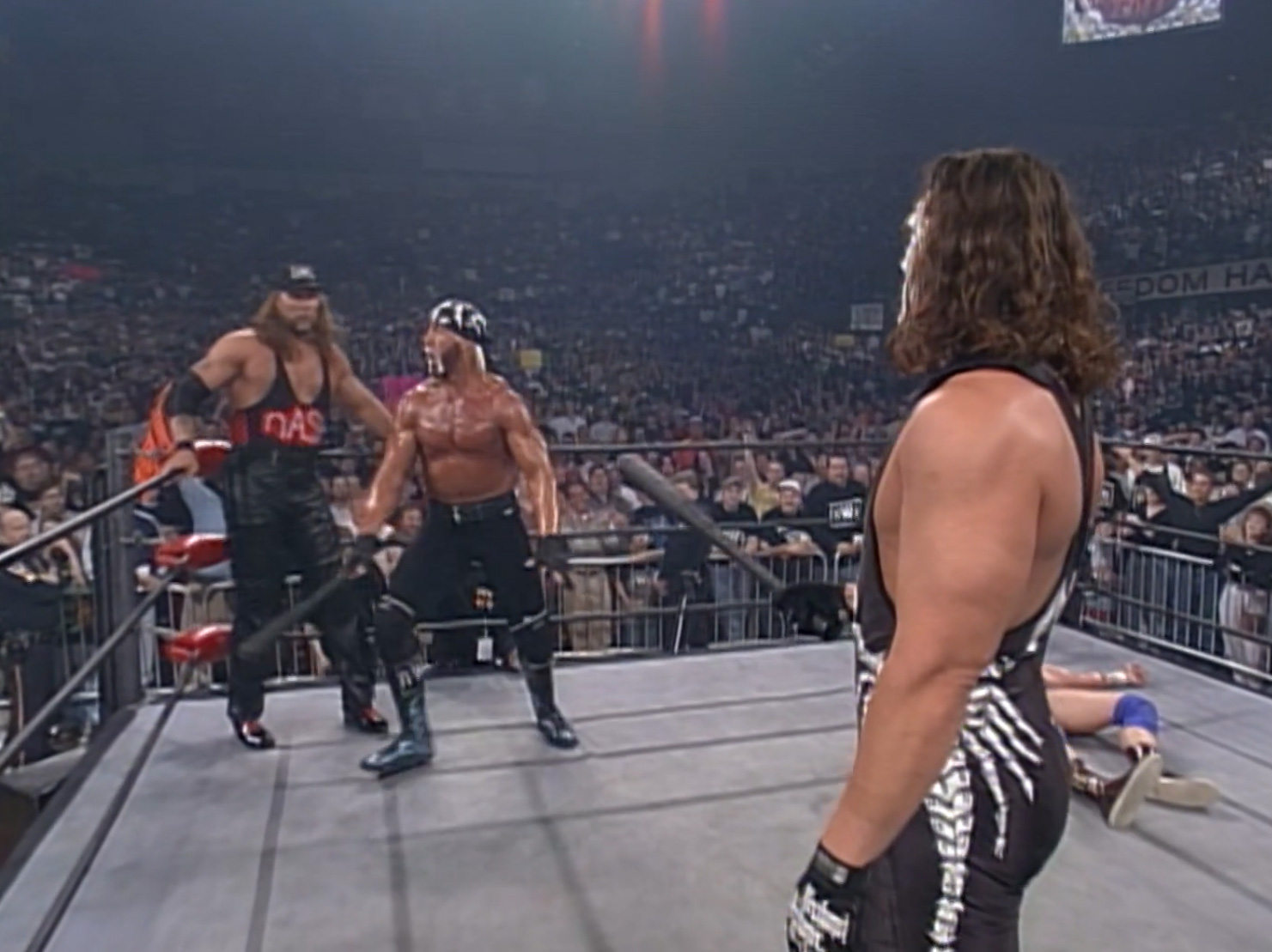 Suddenly, Savage attacks Sting from behind, and they fight on the floor. Hogan and Nash double-team Piper in the ring until Giant arrives to even the odds. Giant rips the bat away from Hogan and Savage, so the nWo scurries away to end the show. 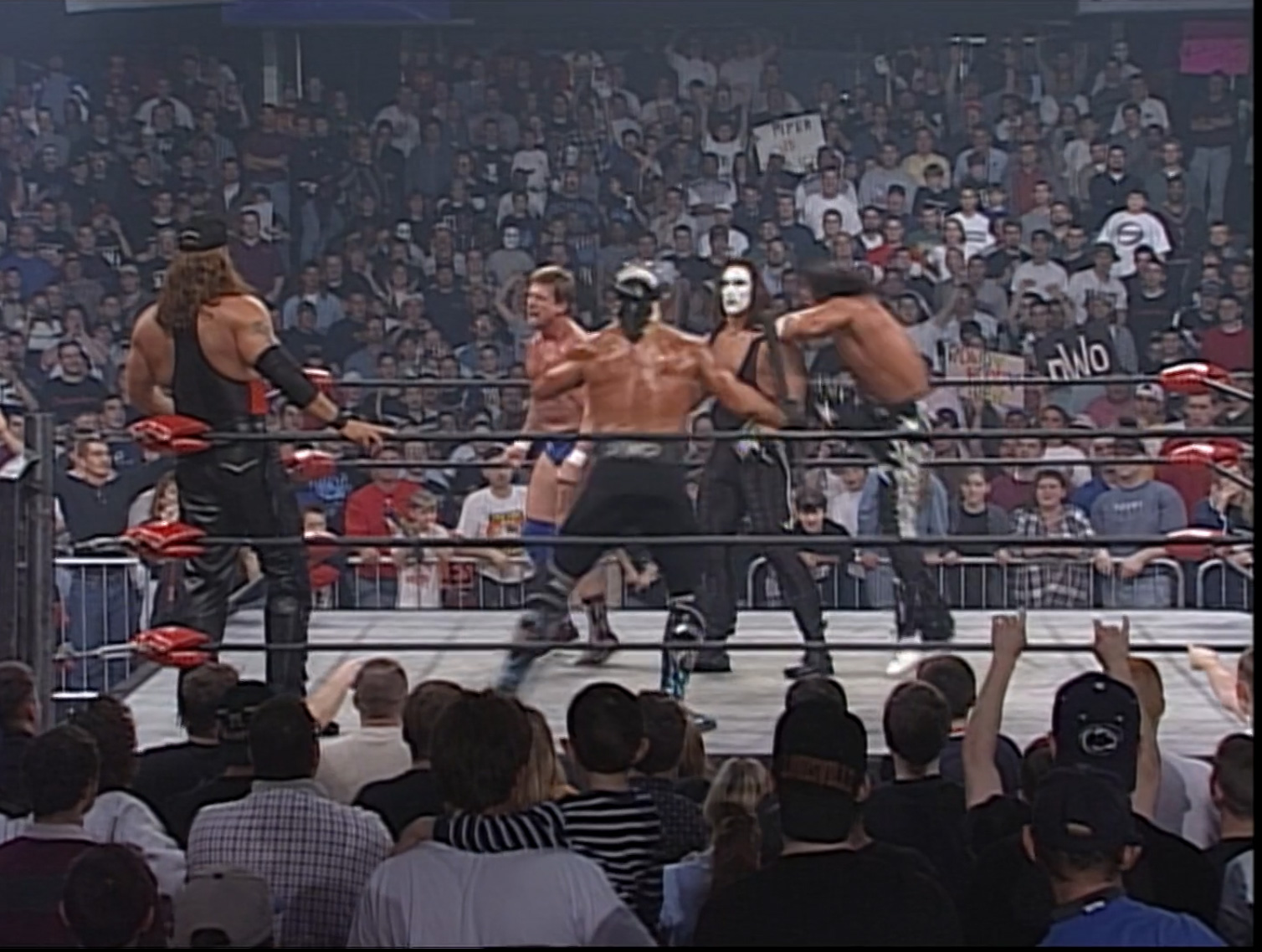 Conclusion: Batter up! And I don’t mean fried chicken. To celebrate the beginning of baseball season, WCW is having a bat match at the April PPV. Say what you want about Piper, but he brings eyeballs to the program with his unparalleled charisma.

In the meantime, the Sting-DDP match is must-see. Also, the Eddie-Chavo storyline along with the Benoit/Booker T match offer great entertainment this week. What more could you ask for?