Mike Tyson is here! What does he have in store for us? Also, can Austin conquer Kane on his way to WrestleMania? What is DeGeneration-X up to this week? Let’s find out!

Speaking of Austin, he wastes no time in getting to the ring and gets in Michaels’ face. Suddenly, the arena goes dark, and Kane appears with Bearer at the entrance. Bearer promises that Kane will cause Austin to miss WrestleMania XIV.

Austin steals Cole’s headset, joins the broadcast team, and knocks JR’s cowboy hat off. HA! He then promises to become the next WWF champion to the extreme delight of the Cleveland faithful. 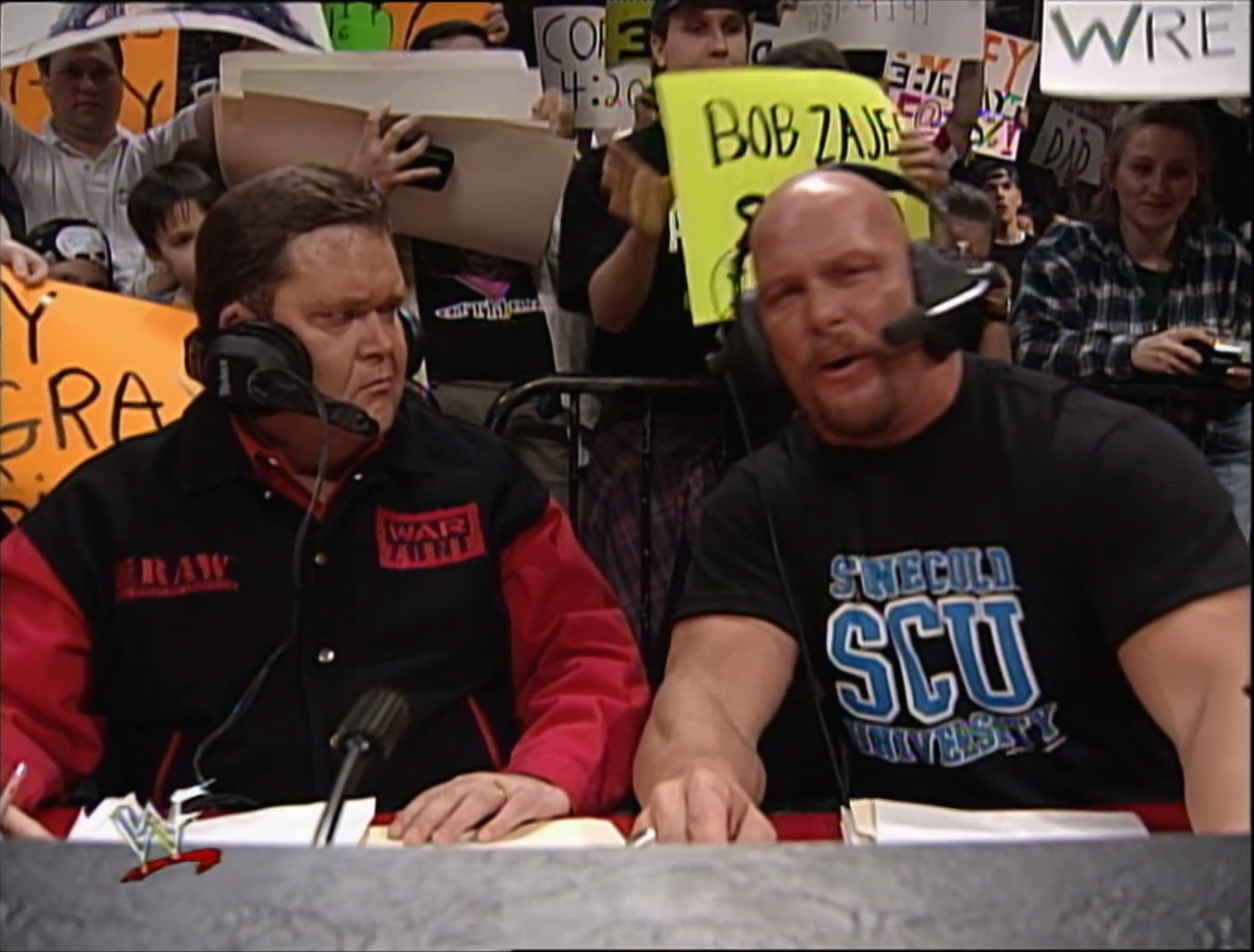 Prior to the opening match, we revisit last week’s episode when Chainsaw Charlie and Cactus Jack scared the bejeezus out of the NAO.

The NAO make their entrance wearing neck braces. Also, a dumpster is sitting at ringside. To get cheap heat, the NAO also wore anti-Cleveland Indians t-shirts. In truly fascinating fashion, we get New Age Outlaw cam showing their version of the attack.

Shaken, Road Dog states he has a note from “Mrs. Horshack” giving the NAO the night off. On the other hand, Commissioner Slaughter appears on the Titantron to dispute that claim.

Match 1 for the WWF tag team titles: The New Age Outlaws (champions) versus the Disciples of Apocalypse

Summary: All storyline as this was a continuation of the NAO-Charlie/Cactus feud.

Video airs of the Mero-Sable saga.

Summary: Brandi got in some offense, but Mero dismissed him like a first grade pupil.

After the match, Luna congratulates Mero on his victory and kisses him. That sends a swift Goldust to the ring to attack Mero. While Luna and Goldust double-team Mero, Sable jiggles to the ring to save her husband. She pulls Luna off Mero and gives her a hair mare. Next, when Mero questions her, Sable shoves him down. Woohoo! 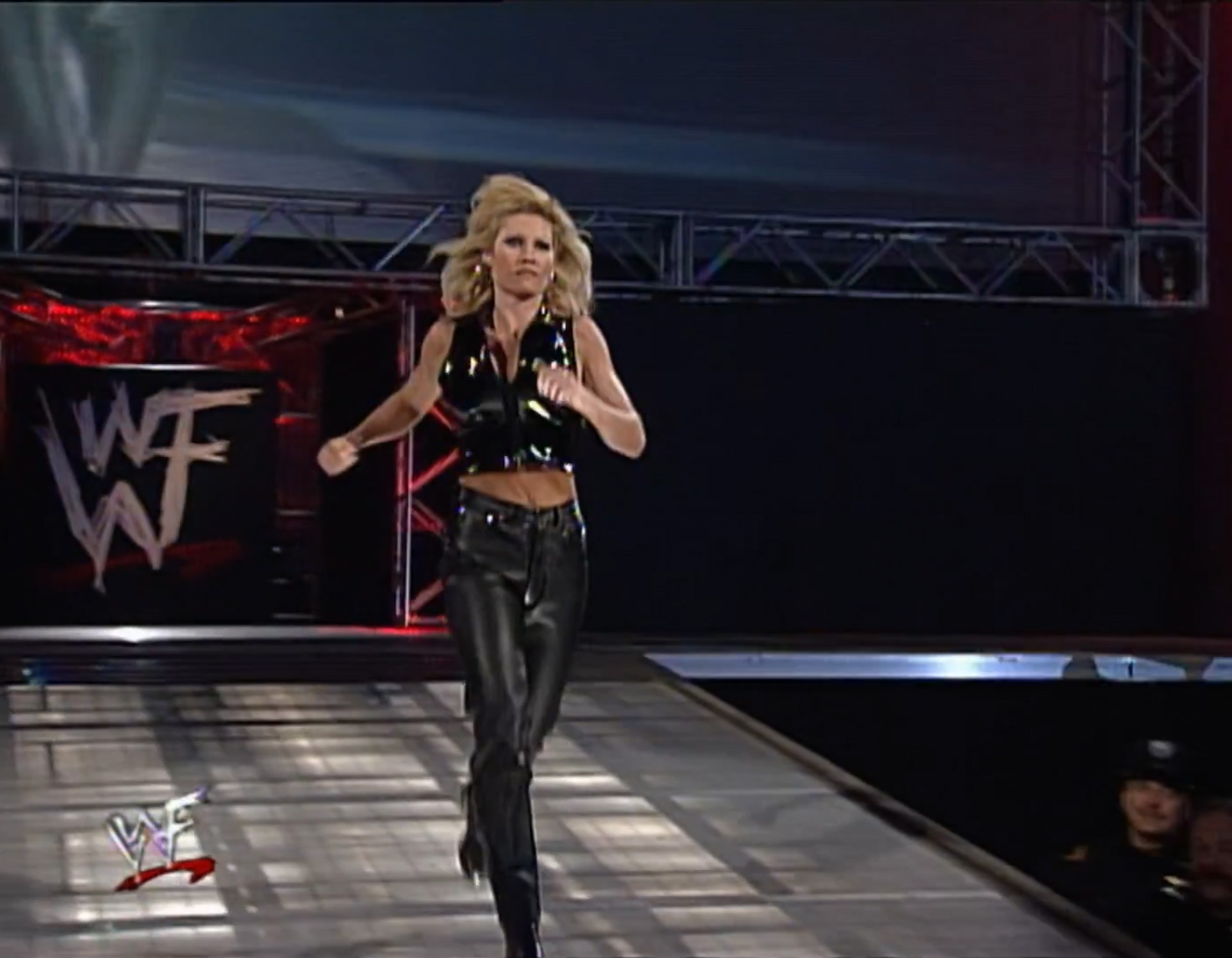 Summary: If you want Henry to have a viable match, put him in the ring with Owen. Case closed. Of course, DeGeneration-X wants Owen to retain the title; therefore, Chyna interferes on his behalf.

At ringside, Cole interviews Chyna who garbles her answer horribly.

Prior to the next match, we revisit last week’s episode when the Headbangers won the NWA World tag team titles. The Headbangers cut a promo on the Rock’n’Roll Express, and Michinoku chimes in by calling Cornette a “jackass.” HA!

Summary: Not a dull moment in an extremely short time span. If they only had more time…

After the match, Cornette begs the Headbangers to put the titles on the line next week.

To a chorus of boos, Vince McMahon introduces “Iron” Mike Tyson. When Vince asks who will win the main event, DeGeneration-X interrupts before Tyson can answer. Michaels “respects” Tyson unlike Austin.

Despite said “respect,” Michaels challenges Tyson who doesn’t back down at all. He and Tyson stand eye-to-eye, and the trash-talking and shoving begins. As Michaels grabs Tyson by the shirt, he threatens a punch, but rips the t-shirt instead. 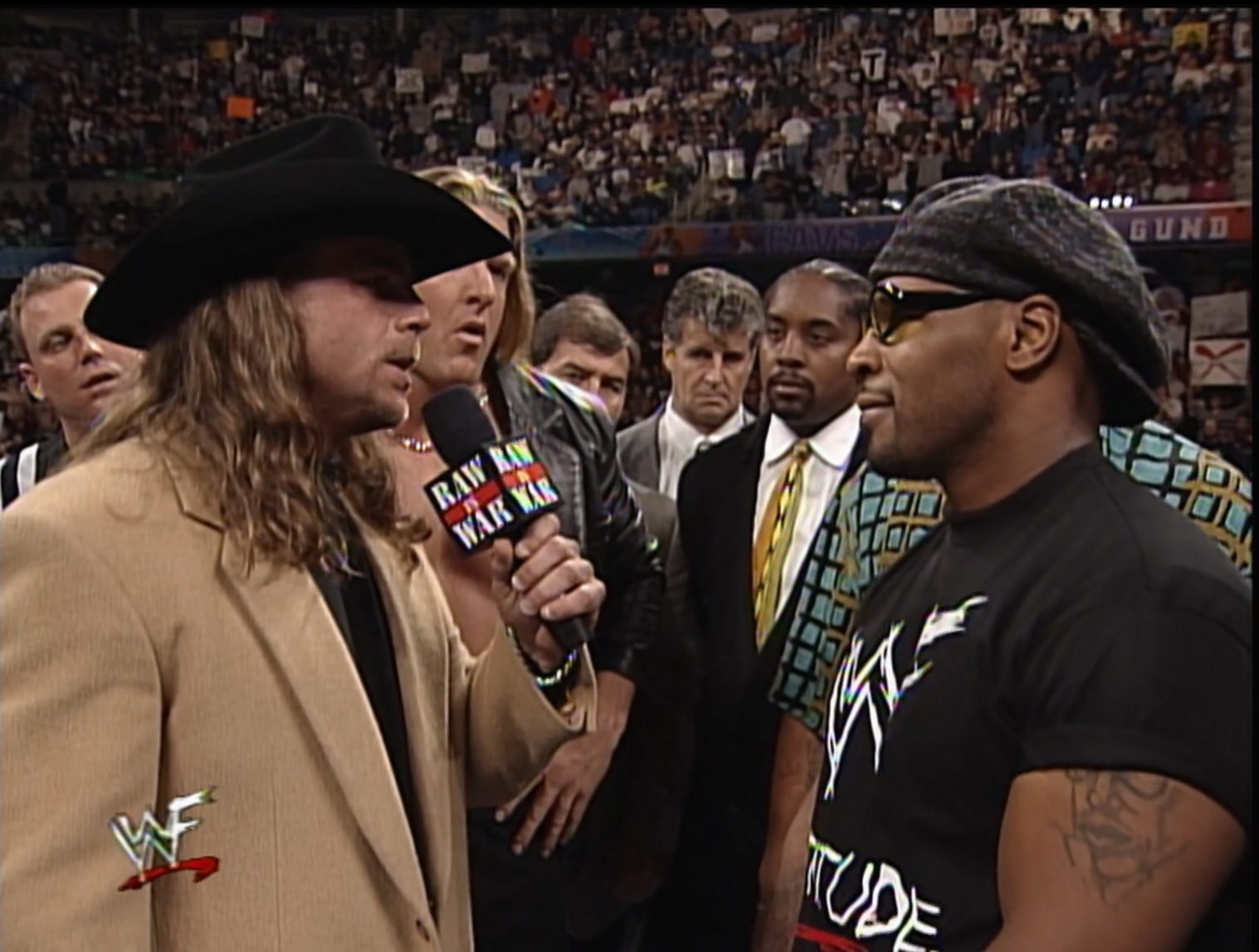 In a giant swerve, Tyson has “joined” DeGeneration-X. The group celebrates while mocking Vince. If you like crotch chops, then this is YOUR segment. 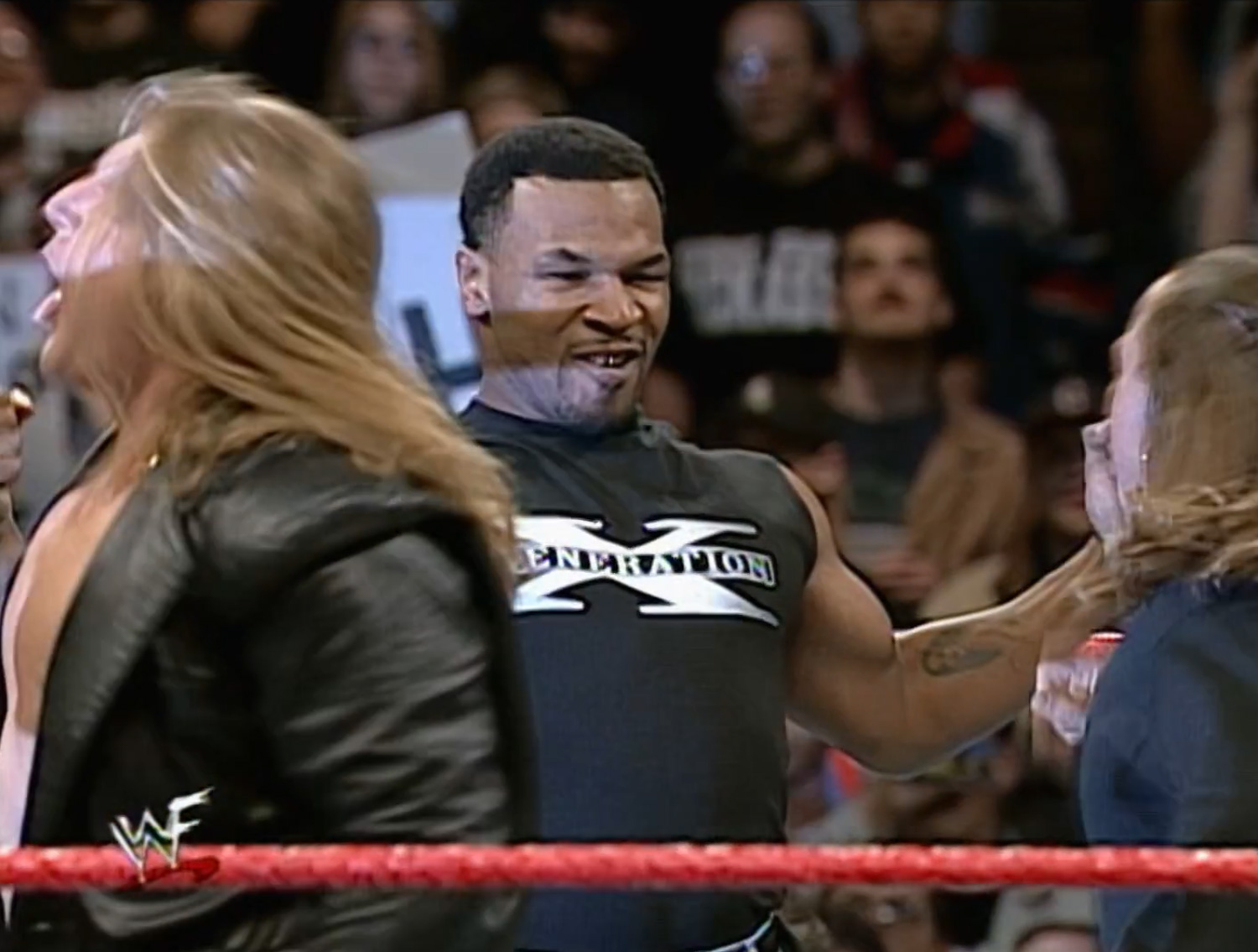 Following a commercial break, Tyson and DeGeneration-X celebrate in the locker room.

Prior to the next match, we revisit the 2/21 episode when the Rock saved his poster but sacrificed Faarooq against Blackman. We then revisit last week’s episode when Brown cost the Rock a match due to a foreign object.

Match 5: Steve Blackman versus Kama (w/ the Nation of Domination)

After the match, Faarooq DEMOLISHES Blackman with a Dominator. The Rock then provides Blackman with a Rock Bottom, and I believe that’s the move’s first reference as such. As Shamrock hits the ring to save Blackman’s bacon, he belly-to-belly-suplexes Kama.

Holy southern gentlemen, Batman! It’s Colonel Robert Parker! Of course, the WWF renames him Tennessee Lee to confuse folks. Nevertheless, he introduces his newest charge—“Double J” Jeff Jarrett. To ZERO reaction, Jarrett reprises his previous gimmick. He bodes the NWA goodbye and welcomes Lee as his manager. This segment went over as well as a fart in church. 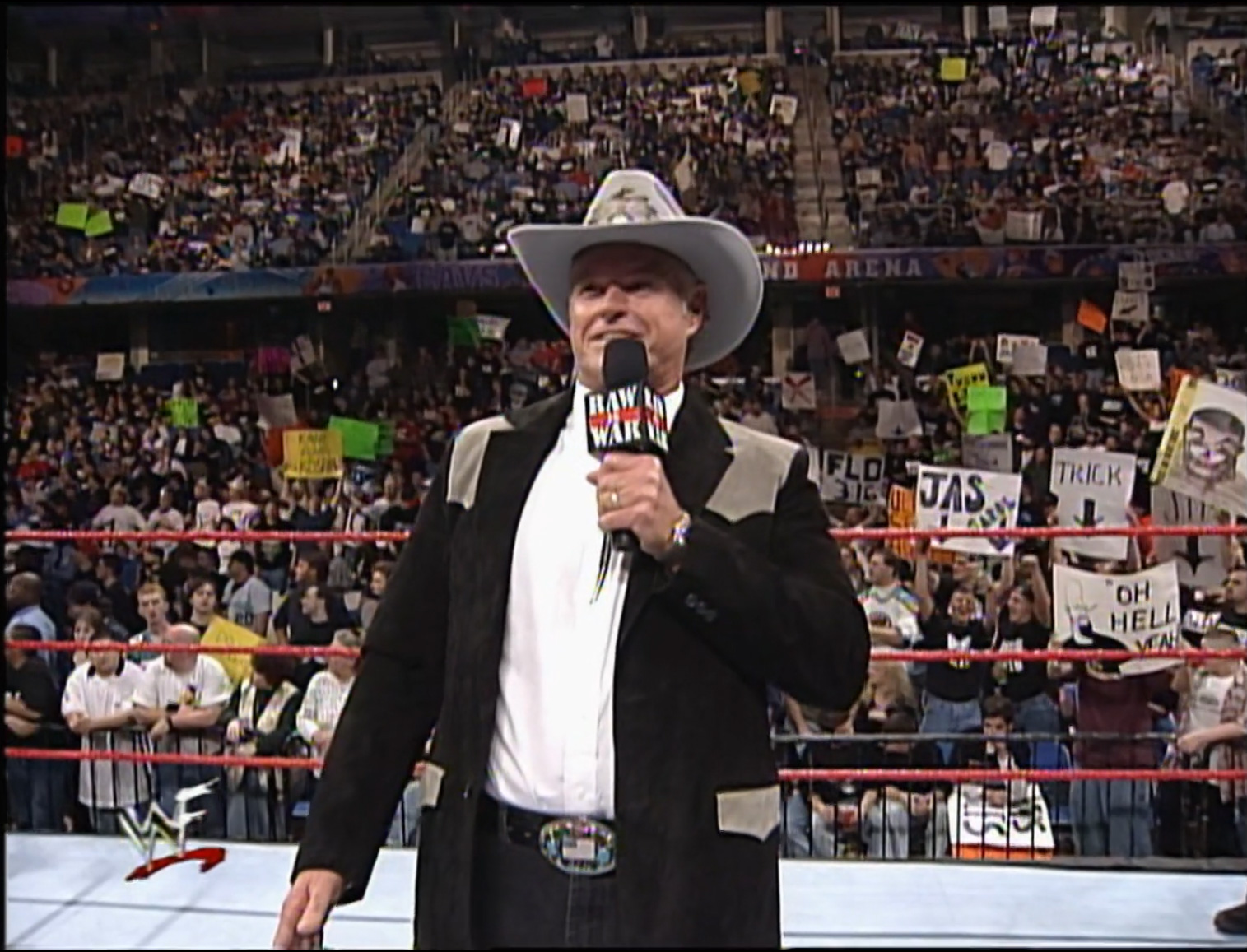 At WrestleMania XIV, Gennifer Flowers will making an appearance. For those unaware, Flowers is known for having an extramarital affair with President Bill Clinton prior to his presidency.

Following a commercial break, Cole stands outside the limousine to interview Tyson with DeGeneration-X. Only offering a few words, they basically blow Cole off.

WrestleMania XIV will be LIVE on PPV on 3/29. Order NOW!

Video airs about the Road Warriors. What’s next for them? 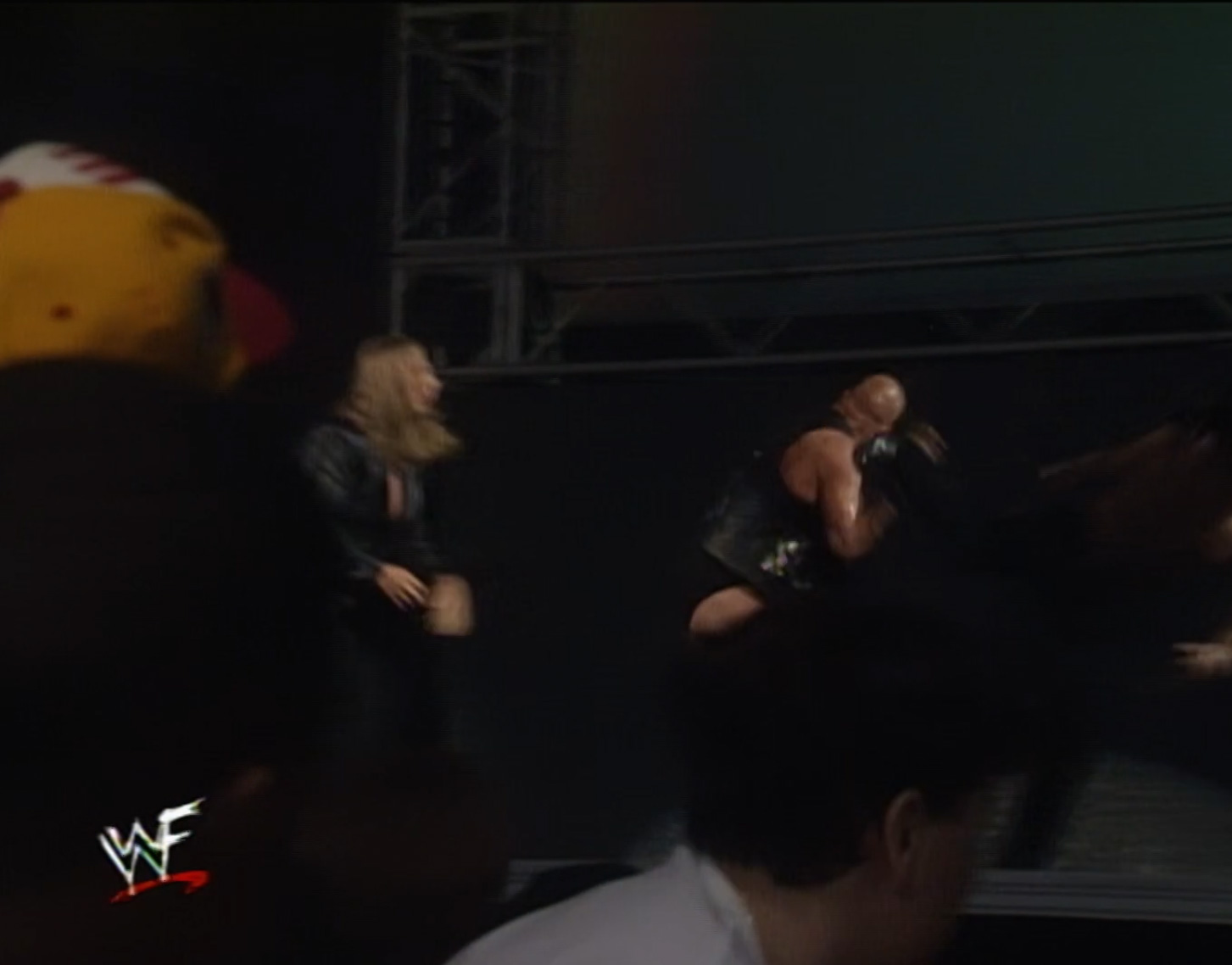 Summary: You’re telling me that Nitro pulls off their main event, but RAW baits and switches theirs?

Following a commercial break, Bearer and Kane remain in the ring. Bearer requests that Kane obtain the ring bell. Prior to doing so, Kane pulls a fan out of the front row and shoves him down to the floor. Heinous! He then grabs both the bell and timekeeper Mark Yeaton and tosses them into the ring.

Bearer requests that Yeaton ring the bell in the memory of Undertaker. Afterward, he summons Kane to ring Yeaton’s bell. Following a chokeslam, Kane tombstones Yeaton. Bearer then states that Kane has one tombstone left in the chamber and is seeking a victim.

All of a sudden, the gong of the Undertaker rings and the lights go down. Instead of the ring having a red hue for Kane, it has changed to purple. Undertaker’s music starts, and a lightning bolt strikes a casket on the ramp. 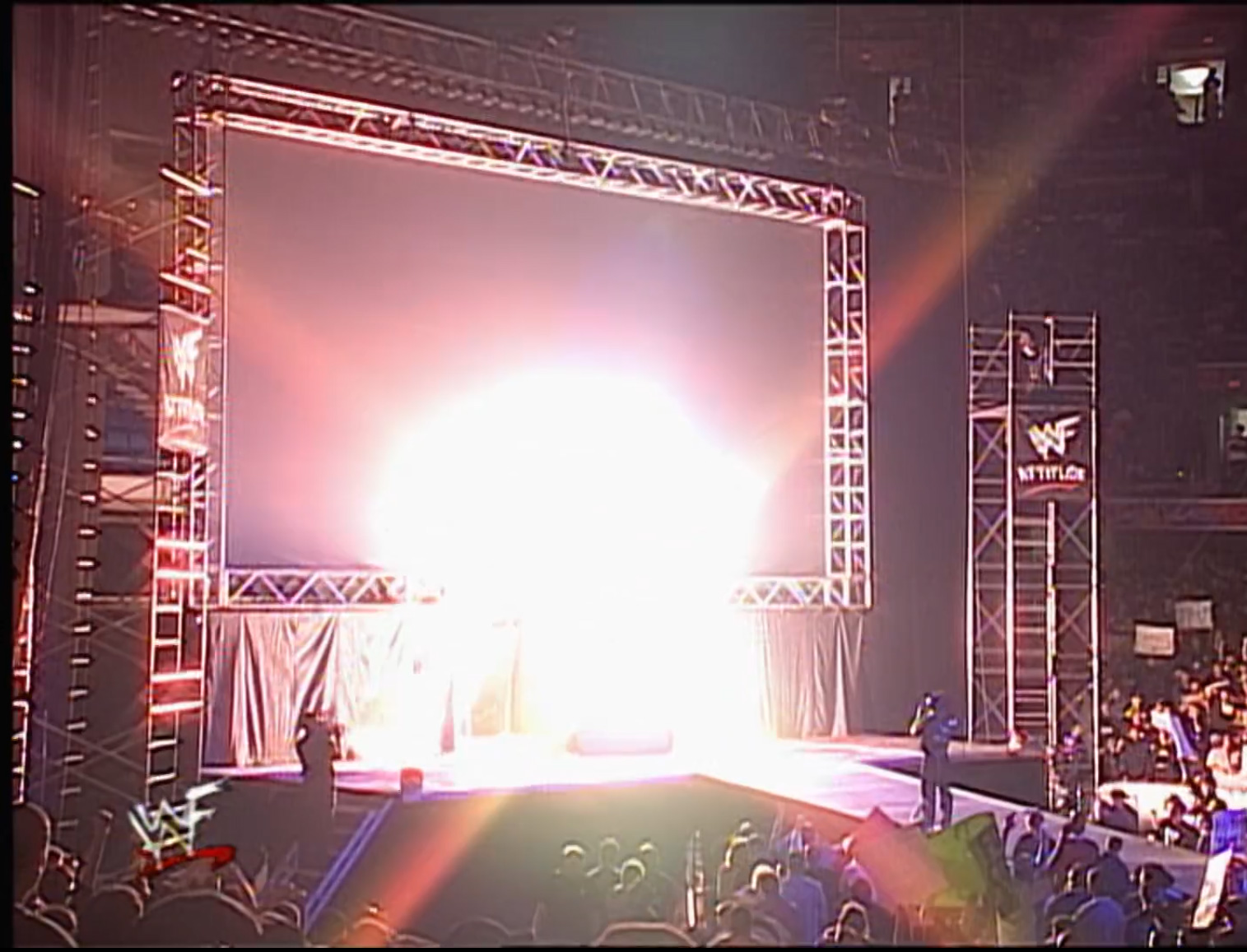 Atop the casket, the Undertaker rises from the dead. He then cuts a haunting promo on Kane who unleashes the fire upon the ring posts. While Undertaker mentions that he is the “Lord of Darkness,” he vows to destroy him at WrestleMania XIV. Excellent promo! 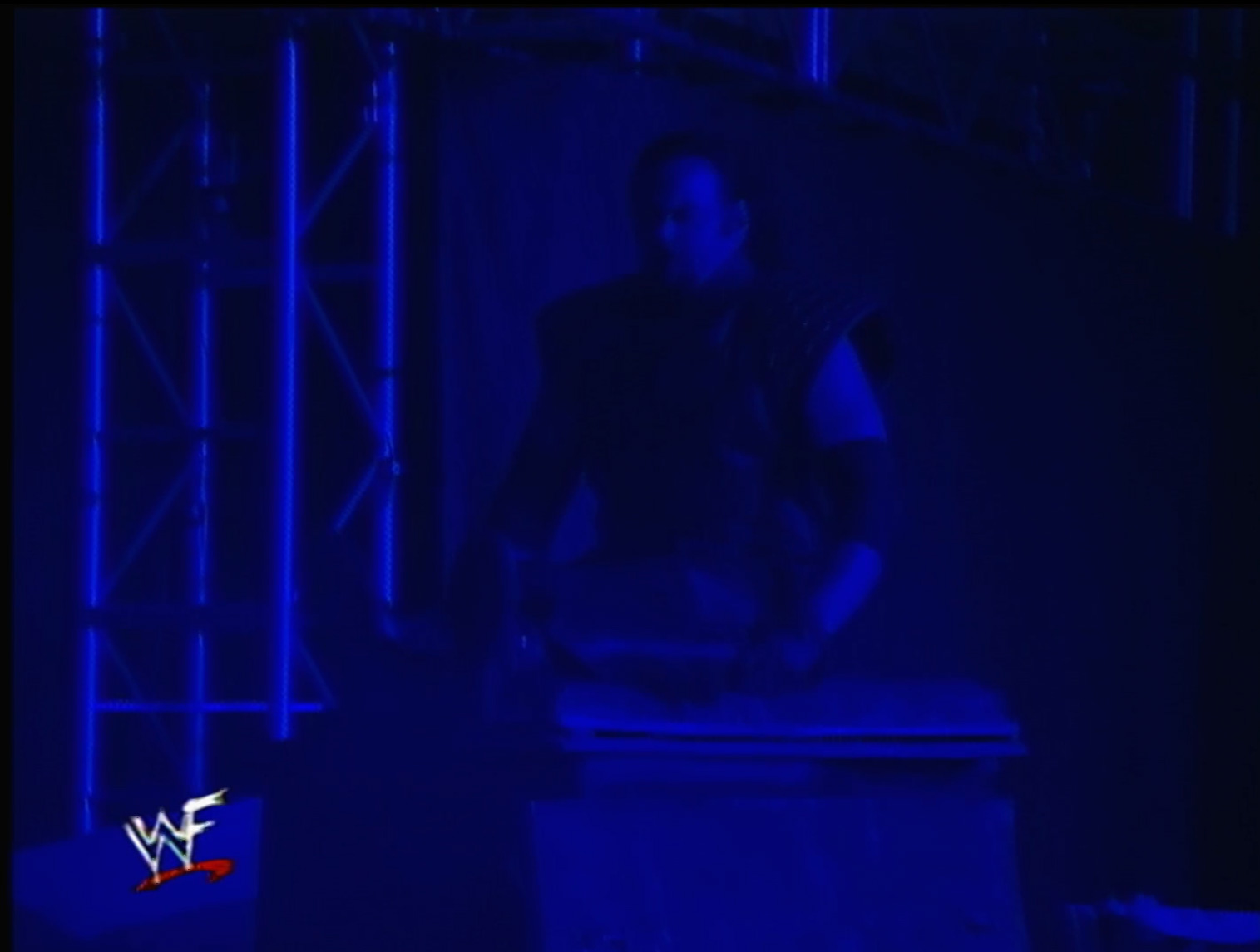 Conclusion: Despite the bait-and-switch, the Undertaker promo was gold. The Tyson angle was a nice touch because it didn’t contain the obvious celebrity “great to be here” vibe. The rest of the show may have been entertaining, but I don’t believe it was change-the-channel-from-Nitro worthy.

Who won? Nope, once again Nitro defeated RAW by a single ratings point. The star power of their main event was a better catch than a Mike Tyson appearance. If RAW would knock off the Shotgun Saturday Night level of matches after they pull a rabbit out of their hat, then they might maintain/increase their viewership.