Can Sting and Savage take down Hogan and Hall? Or is the better question can they coexist? Who will be joining the nWo tonight? Let’s find out!

As the program begins, a black limousine pulls into the arena, and the nWo has arrived.

Match 1: The “Crippler” Chris Benoit versus Riggs (w/ the Flock)

According to Schiavone, The Harvard Lampoon named Savage their “Real Man of the Year.” In case you’re curious, Tenay plugs Savage’s appearance on Later this week. Video of the award presentation follows. 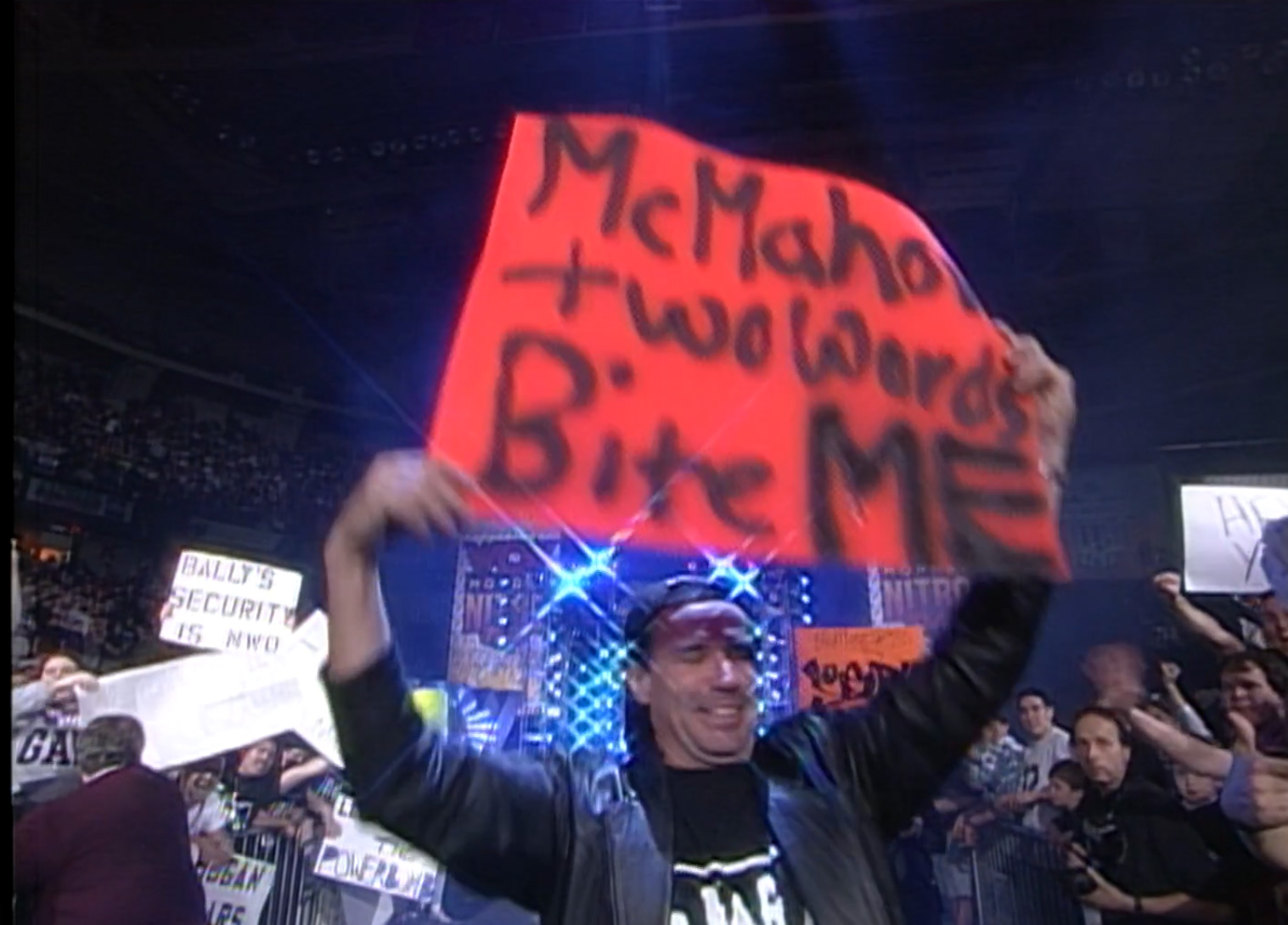 Nonetheless, Hogan spews some nonsense while mocking Savage. He then goes truly LOW by riding Savage about his marriage to Elizabeth. He then gets ICE COLD by mocking Savage’s hair plugs. Methinks Hogan hasn’t looked into a mirror in 20 years.

Back at the pleasure palace, a.k.a. St. Joe’s, Okerlund plugs the WCW Hotline.

Summary: Good TV match, but why Iaukea? When he debuted a year ago, he was a mockery of the Rocky Maivia character. Since Maivia has transformed into the Rock, Iaukea’s continued presence is futile.

Meanwhile, back at the house of ill repute, the Public Enemy made an appearance earlier today. Okerlund interviews Officer Charles Bentley who wants to party with him. Next, he interviews Mike Carome who won a trip to Spring Break at Club La Vela in two weeks. Send your tape in to have a chance to send the Nitro Girls to your home. Methinks my wife would be none-too-pleased.

Summary: The match gets two stars for the superplex through the table spot, and the rest gets zilch.

Savage and Elizabeth emerge from the entrance and head to the ring. As Savage rebuts Hogan’s bologna while hyping the main event, he states that Sting will do business “my way.” Appropriately, Sting joins him in the ring. If you can believe it, Sting actually speaks and sends a “hey yo” in Hall’s general direction. He then directs his attention to Savage and mentions that he only does business “my way.” Who’s going to budge? 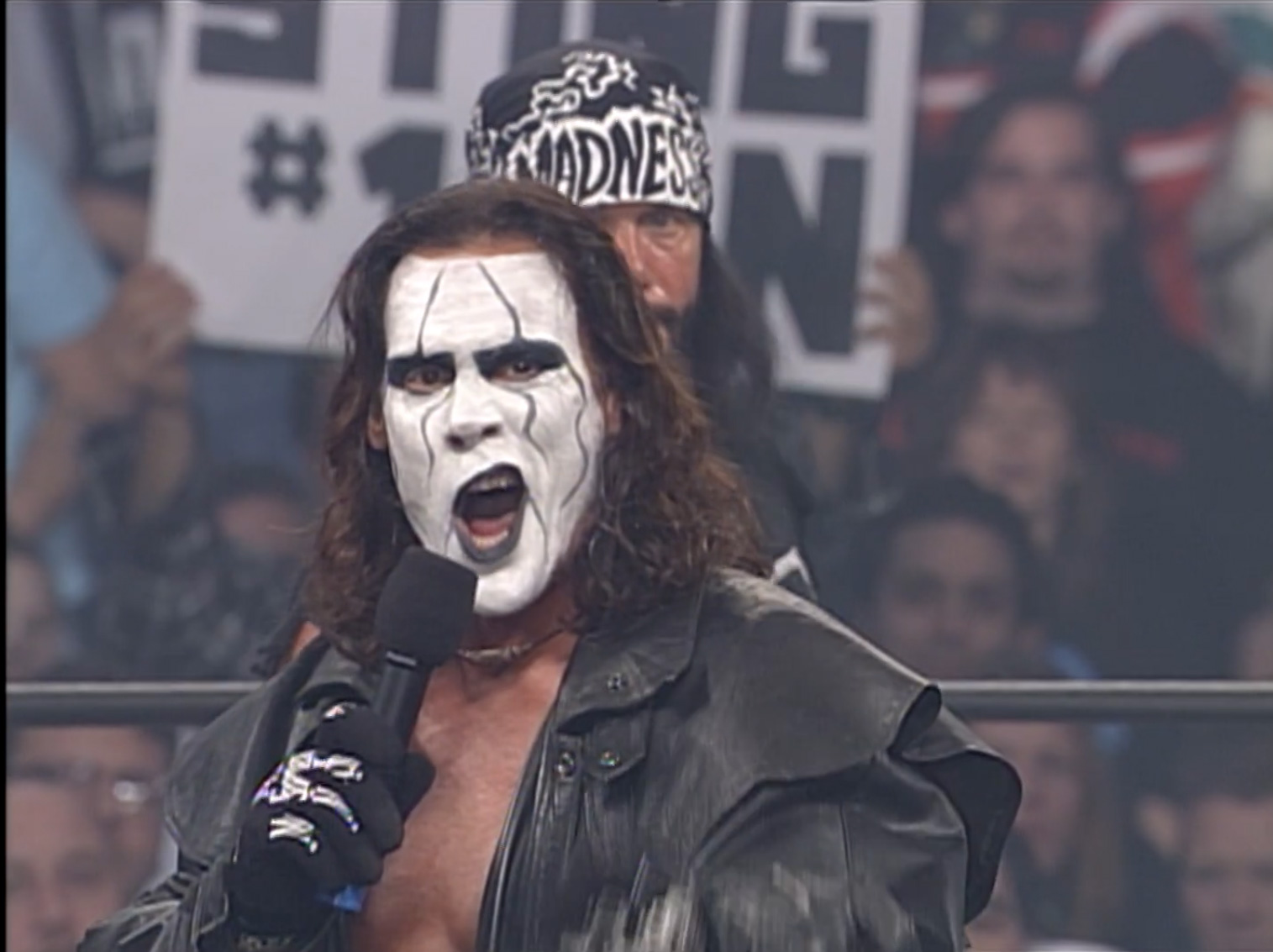 Afterward, a Stuck Mojo video featuring DDP airs. The Flock gets involved, but DDP dispatches them better than a 911 operator. I apologize to those of you who are fans of Stuck Mojo, but this song SUCKS. For those who care, Reese makes his Flock debut in the video. Let’s hope he doesn’t fall to pieces.

In the ring, Tenay interviews DDP who cuts a promo on Raven in anticipation of their match this Thursday on Thunder.

Following a commercial break, Hammer jumps the railing, procures the microphone from ring announcer David Penzer, and calls out DDP.

Match 7 for the WCW US title: Diamond Dallas Page (champion) versus Hammer (w/ the Flock)

After the match, DDP reverses a cross corner whip but eats boot on his follow-through. Astonishingly, Raven dropkicks him, but Benoit arrives to supply him with a pair of German suplexes. He then holds Raven for DDP, and you can see it coming before it happens. Yes, DDP inadvertently nails Benoit. They brawl for a bit then decide to pummel Raven together.

In the meantime, the debauchery continues as Okerlund interviews Fyre and Kimberly while the frat boys drool.

At the entrance, Tenay interviews Bret who cuts a promo on Hennig and Adams.

Summary: Not much to rate, but methinks Norton has replaced Mongo as Smith’s designated punching bag.

Prior to the next match, Konnan drops his catchphrases before running down Guerrera.

After the match, Konnan tries to unmask Calo, but Guerrera sprints to the ring to confront him in English and en español.

We then revisit the Adams heel turn on Bret followed by Flair’s run-in.

In the ring, Tenay interviews “Nature Boy” Ric Flair, but Curt Hennig and “Ravishing” Rick Rude interrupt him. Flair requests that Rude remain on the floor so that he can handle Hennig. The “match” goes back and forth while Flair does a Flair flip in the corner.

Flair outwits Hennig before nailing him all the way downstairs. Before Flair can hook a figure-four leg lock, Rude interjects himself for the 2-on-1 beatdown. Hennig applies a Hennigplex, and Rude counts to 3. The ambush continues until Bret ultimately arrives to save Flair’s bacon.

We return to the house of horrors as Okerlund shills live events brought to you by Cinnaburst gum. He then interviews the St. Joe’s Hawk, and I’m surprised it didn’t flip Okerlund the bird.

Prior to the next match, we revisit last week’s episode when Scott Steiner became Scott Shiner. 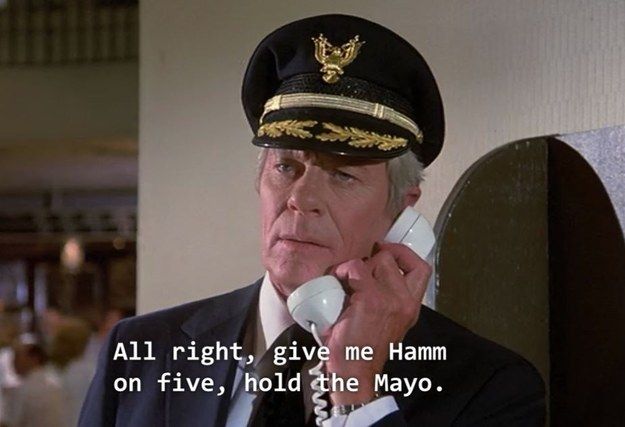 Summary: Showcase match for Scott, but that Recliner is a lazy finishing maneuver.

Prior to the next match, Jericho tries to get the Philly fans to boo him.

Summary: Much like their match on Thunder, they brought the goods but had limited time to tell their story.

The nWo en masse heads to the ring, and Scott announces that his brother Rick will join the nWo tonight. As Rick and Ted DiBiase approach the ring, Rick supplies the nWo with their signature hand gesture. Kevin Nash inducts Rick into the group, but Rick has duped them. He then fights them off until the numbers catch up to him. 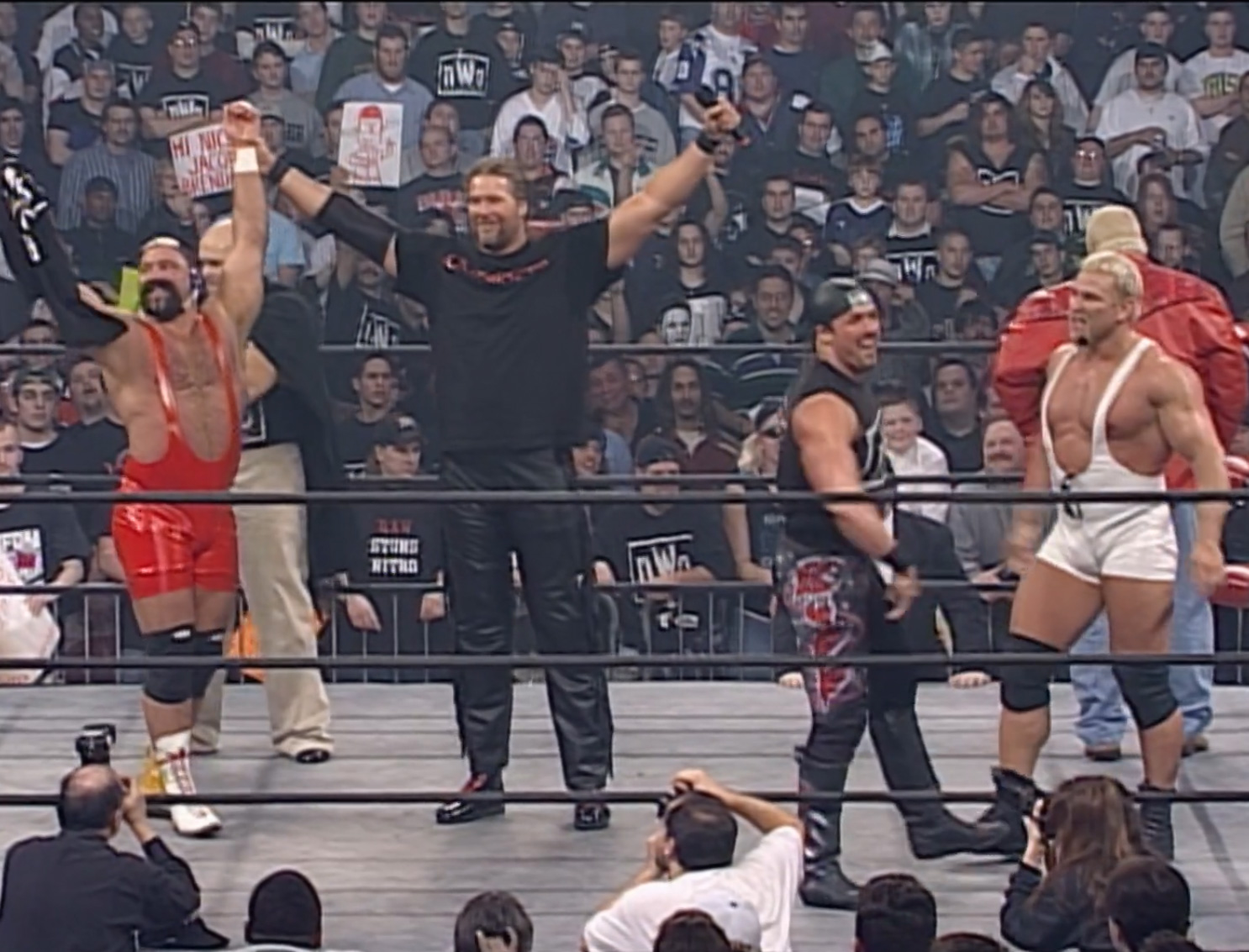 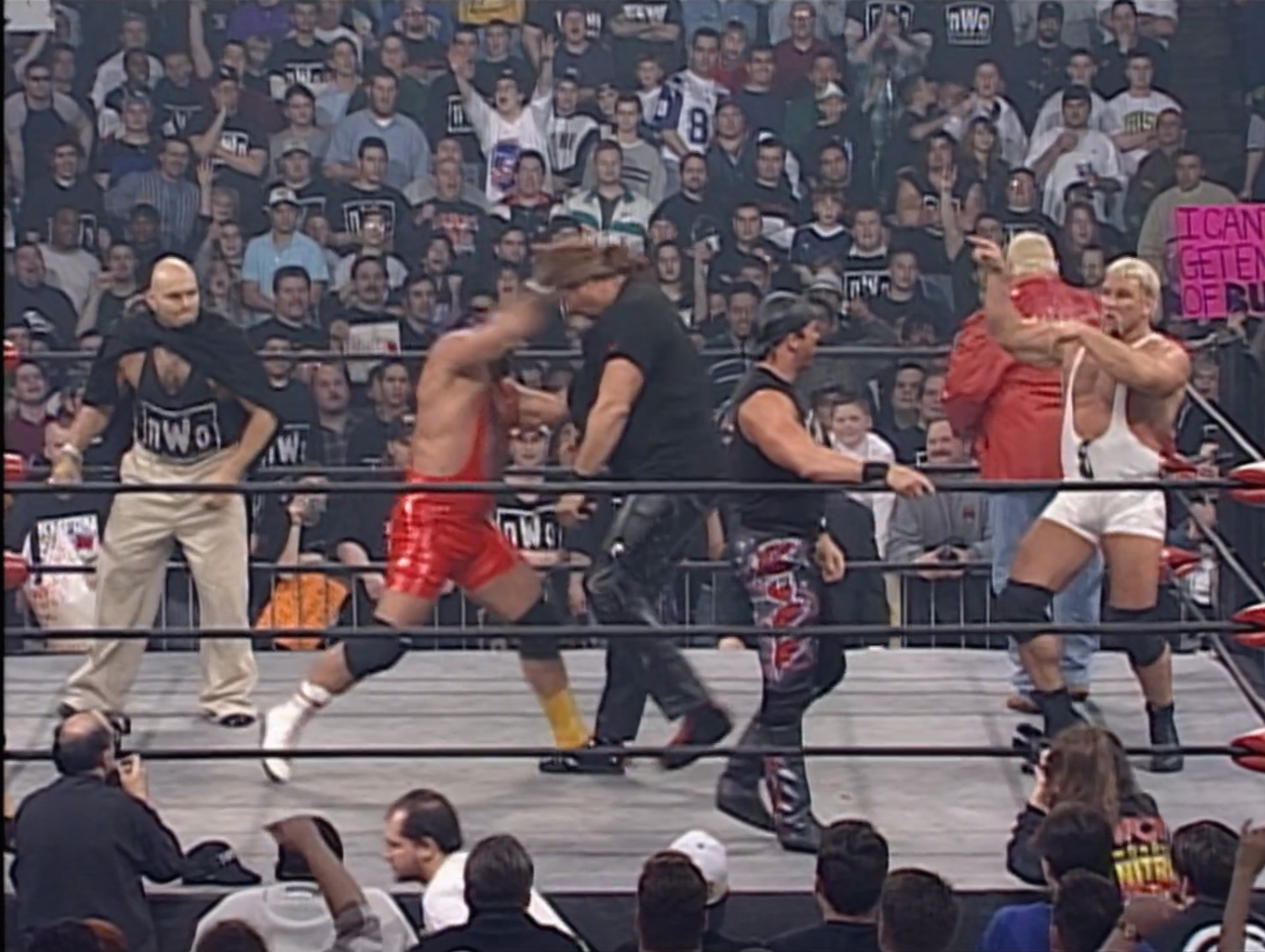 Nash threatens to jackknife powerbomb Rick, but WCW Security director Doug Dillinger warns him about a fine and police escort. While Nash makes a second attempt, Rick backdrops him. Suddenly, Giant storms the ring and stands face-to-face with Nash. He then headbutts Nash and executes a perfect jackknife powerbomb. GET OUT THE SPATULA! With Nash OUT COLD, Rick tears the nWo t-shirt to shreds. 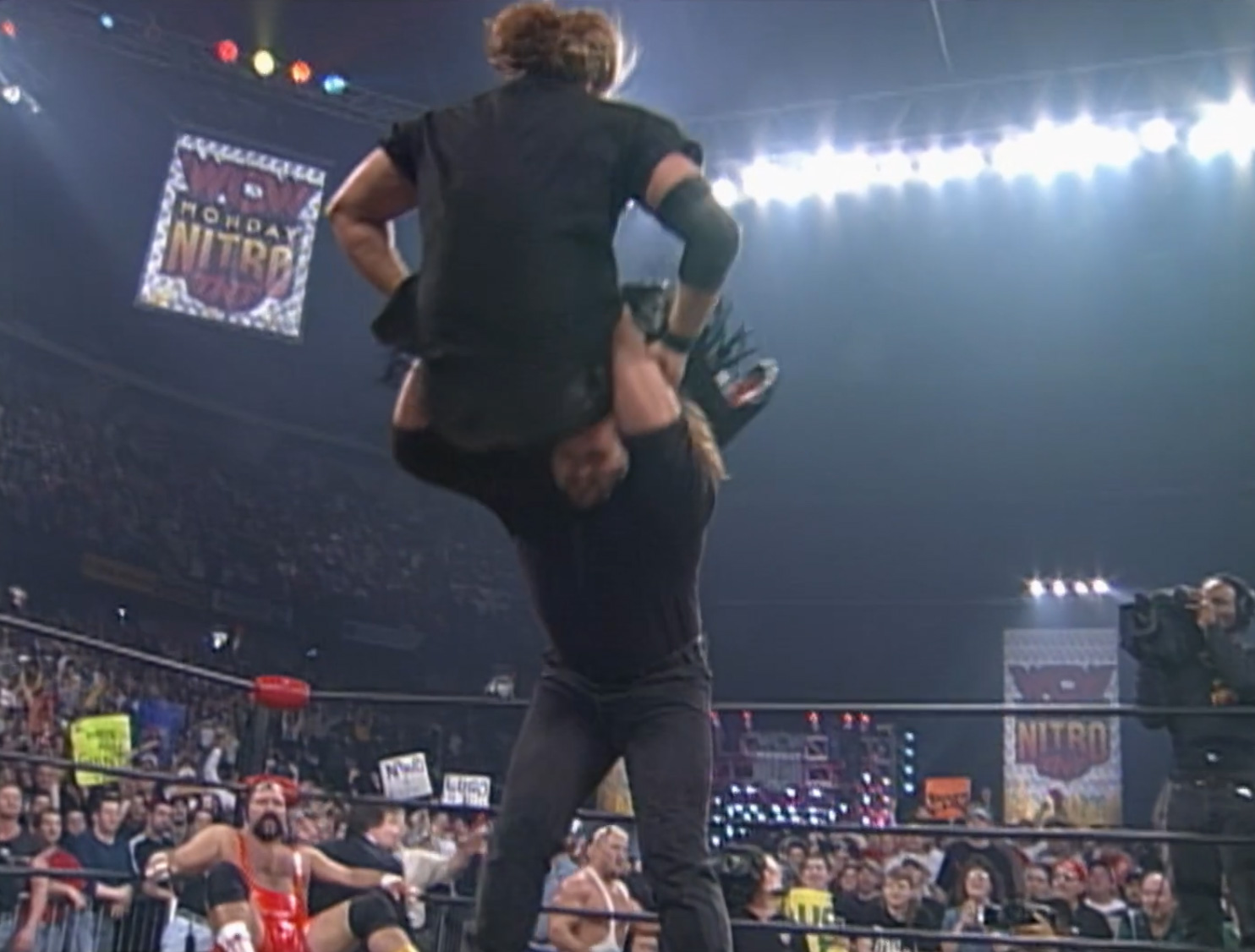 During the commercial break, Dillinger attempts to cuff Giant, but Giant’s wrists are too big for them. HA!

Summary: I was about to flip my lid because WCW just hired Adams. I do not believe they hired him as enhancement talent, but Adams almost did the job. As it was, the match was set up for the Bret-Hennig saga.

Speaking of which, Bret and Hennig brawl to the floor, and Hennig almost DECAPITATES him with a steel chair. The fight continues to the aisle, and Adams recovers to throw Bret down on the concrete floor. OUCH! 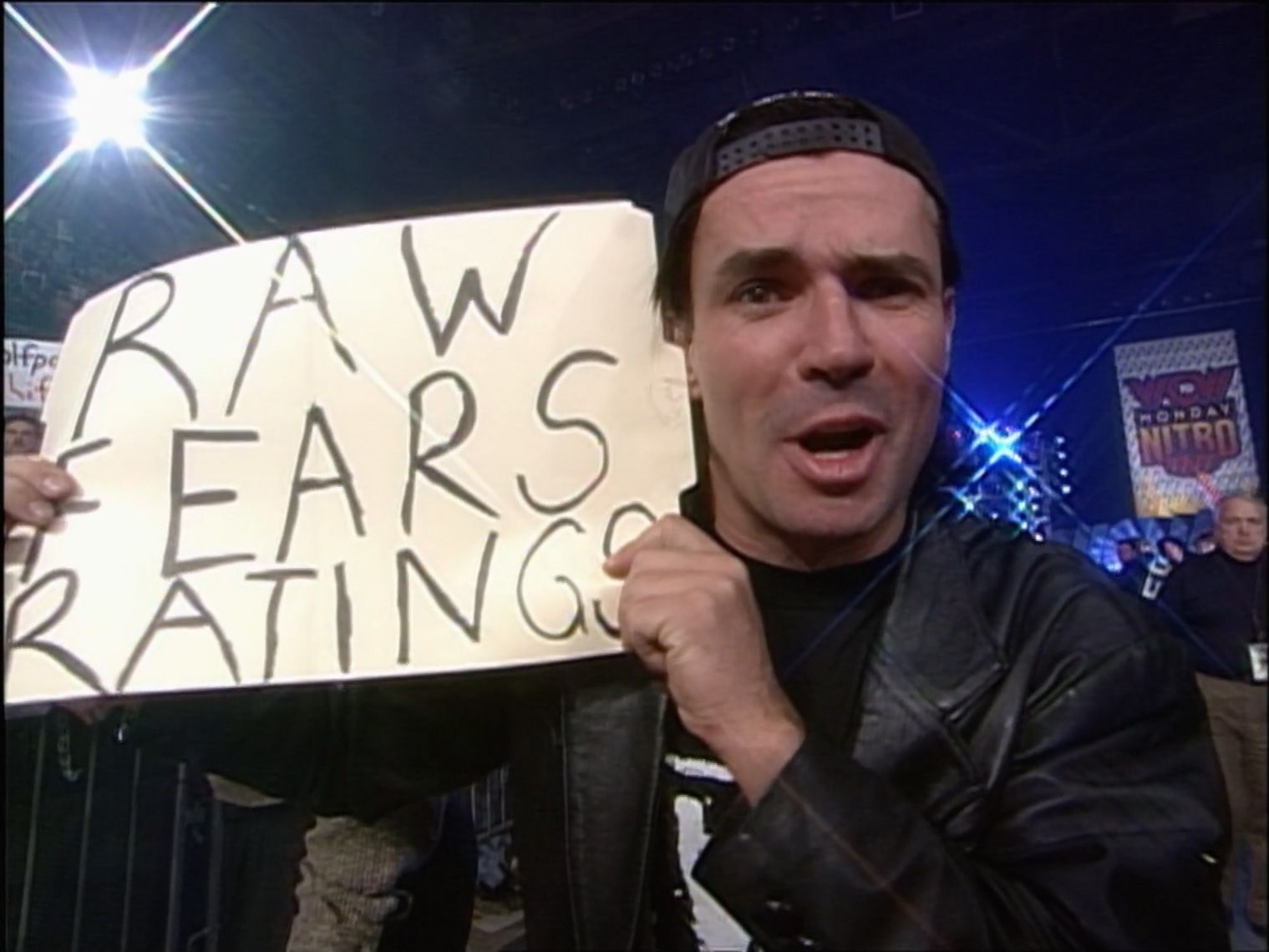 Summary: Without question, this was a PPV main event with a Nitro twist care of the schmozz at the end. Of course, it was intended as a PPV teaser with all four wrestlers involved in the double main event. I’d say it delivered pretty well.

After the match, DDP joins the fray and pulls Bagwell down to the floor. Suddenly, the unique individual who appeared last week dumps Savage with an Ace Crusher. He then escorts Hogan back to the locker room while Sting continues to dispatch the nWo from the ring. As Giant emerges to assist Sting, Hogan refers to the unique individual as “Disciple.” 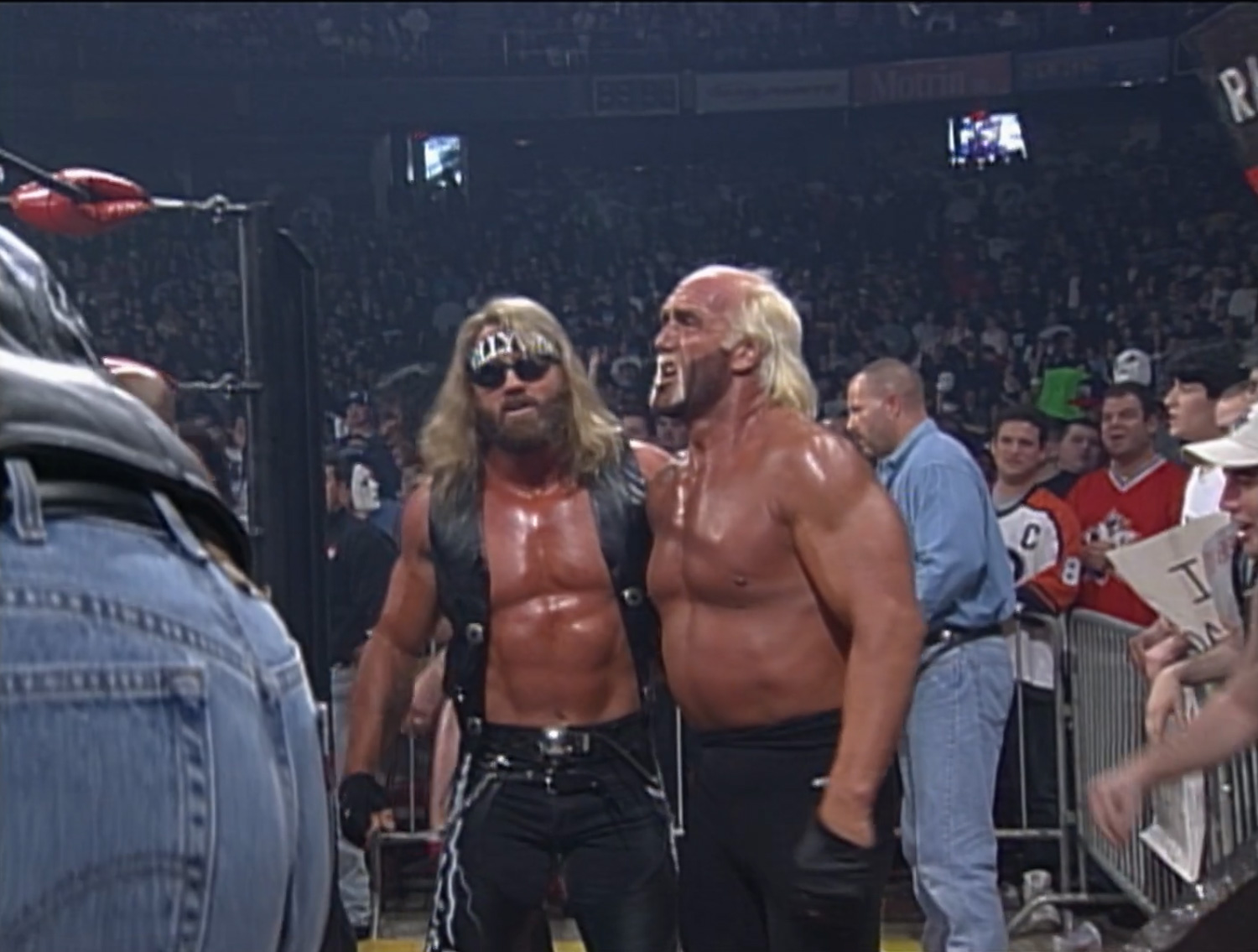 Conclusion: Blockbuster episode with a must-see main event. The nWo-Rick swerve with the Giant powerbomb was also a sight to behold. The rest of the show served up angles and teasers for the upcoming PPV along with a side of Goldberg squash. Despite Mike Tyson’s involvement, I don’t see RAW overtaking this week.