Will Mero upend Owen and take the European title? With a second chance, can the Headbangers defeat their heroes? And what’s up with the Road Warriors? Let’s find out!

Prior to the opening match, Road Dog refers to the Road Warriors as “O.L.D.”

Match 1 for the WWF tag team titles: The New Age Outlaws (champions) versus the Road Warriors

Summary: Solid tag match albeit short which allowed the Road Warriors to put over the champs without looking bad.

After the match, the Road Warriors have a spat that becomes a brawl in a New York minute. Officials try to separate them but with little success. Are we seeing the end of the Road Warriors? Animal leaves yet returns to fight with Hawk until officials finally turn down the heat. 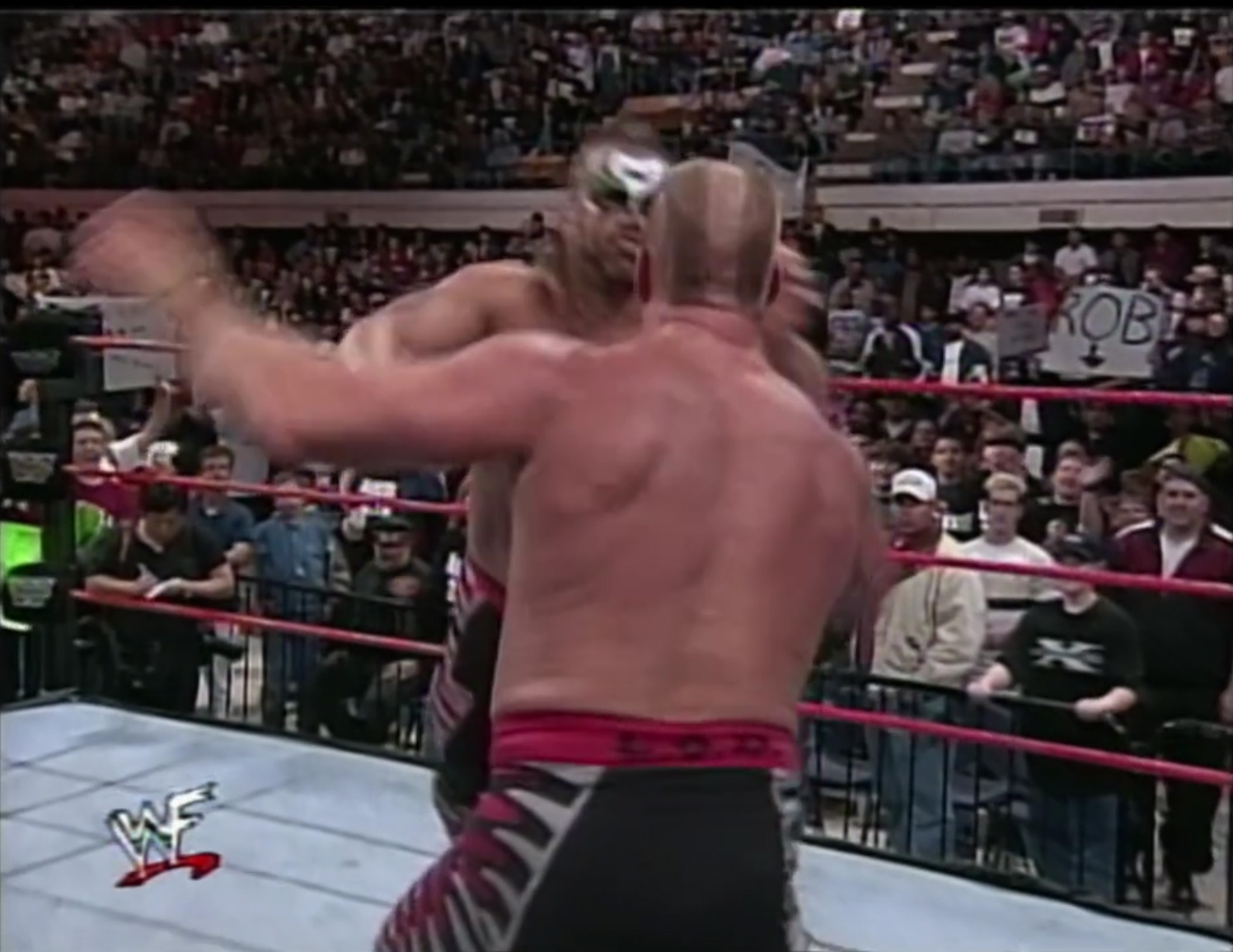 Summary: With Shamrock in a high-profile matchup against the Rock at the PPV, Jarrett had no chance to win. Cornette must have booked this match, and the story being told was believable and didn’t hurt Shamrock’s momentum.

After the match, Michael Cole interviews Jarrett who mentions that he and Cornette “should go…separate ways.”

Back in the locker room, Lawler tries to interview Animal who is hotter than a firecracker. Suddenly, Hawk enters and continues to trade fists with Animal. Methinks neither wants Rocco in the divorce settlement.

Summary: Another unsatisfactory attempt to get Kurrgan over.

After the match, Sniper shoves Jackyl, so Jackyl slaps him. Sniper threatens to part Jackyl hair in a different style, but Kurrgan intervenes with a Paralyzer. Recon asks Jackyl to stop Kurrgan and gets slapped. While leaving the ring, Kurrgan drags Sniper backstage maintaining the Paralyzer.

Allegedly, comedian Carrot Top shills Chairman of the Board while putting over the Headbangers. This was removed from the WWE Network version. I don’t bleme them as I have never heard of this film.

From San Antonio, DeGeneration-X is ready to jump-start the ratings. Speaking of ratings, HHH declares that the PPV will be X-rated. 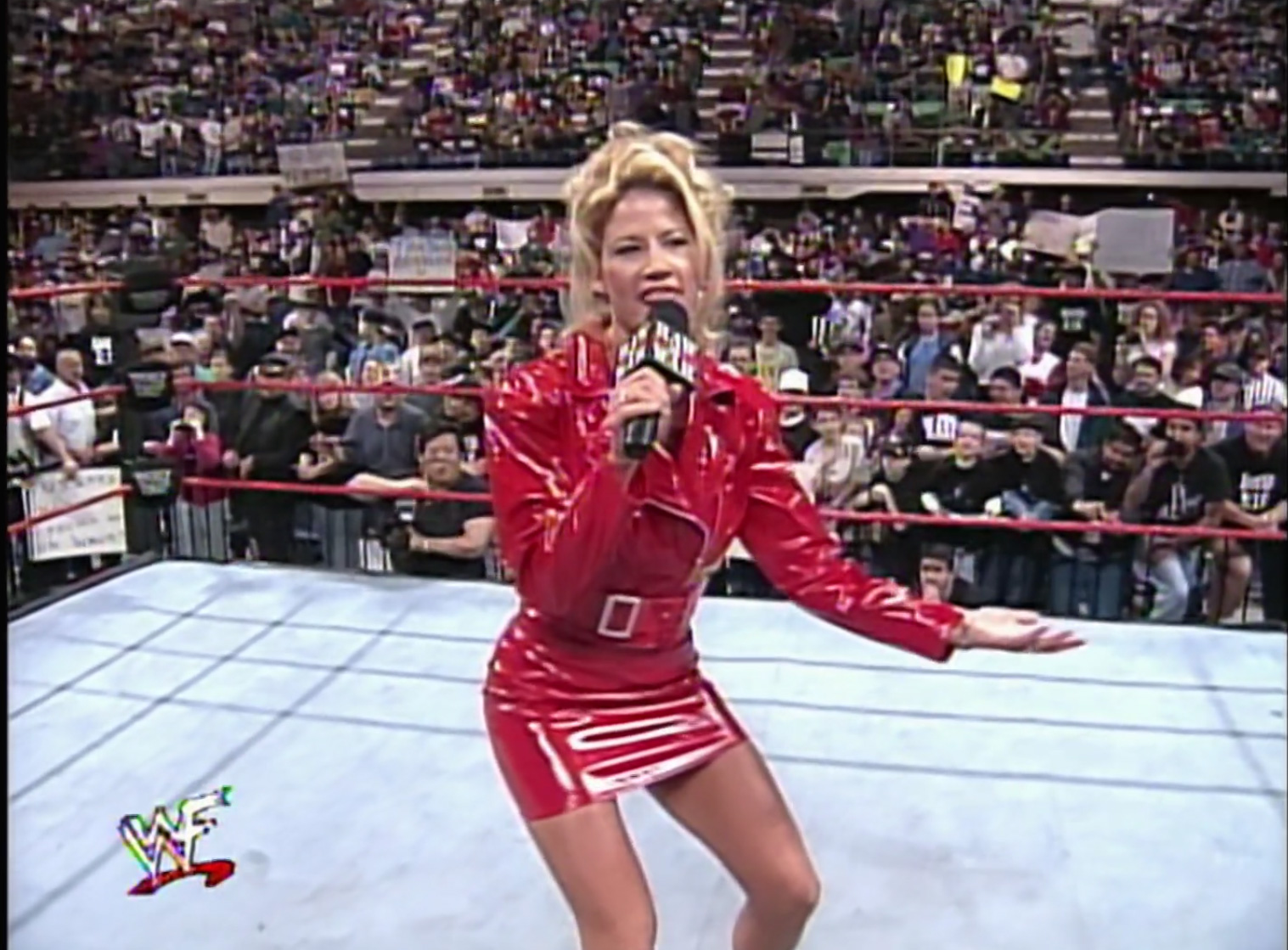 Summary: Waste of time until the Kane interruption.

With Michinoku lying prone in the ring, Kane picked him up and chokeslammed him. He then tombstoned Michinoku. Interestingly, Bearer namedrops Austin while officials scrape Michinoku off the mat. Bearer challenges Austin on behalf of Kane for next week.

Cole interviews the NAO before they leave the arena. As Road Dog speaks, he not only has a camcorder but also wears a DeGeneration-X t-shirt. What’s that about? The NAO gets into their rental car, but Chainsaw Charlie attacks with his chainsaw. Cactus Jack shatters the windshield with a baseball bat, and the NAO hightails it hitting a dumpster during their getaway.

Prior to the next match, Goldust impersonates his father in grandiose fashion while mentioning both Ric Flair and Terry Funk. 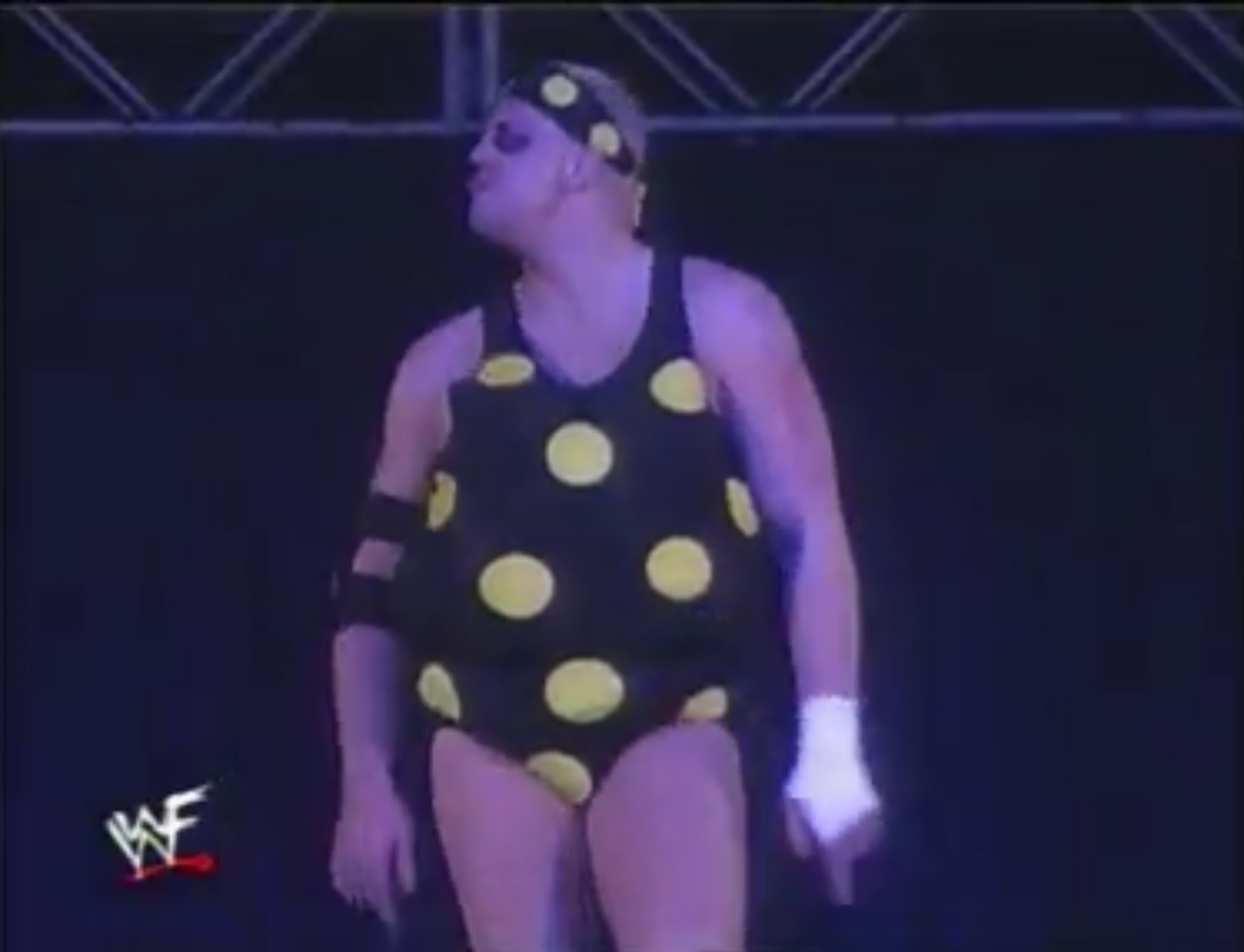 Match 5: Dustydust (w/o Luna) versus Bradshaw

After the match, Cole interviews Dustydust who wants to “hang these tights up.”

Prior to the next match, we revisit last week’s episode when the Rock bestowed gifts upon the NoD at Faarooq’s expense.

Summary: As dissension rises within the NoD, a simple and predictable story plays out in the ring.

After the match, Brown blames Faarooq for screwing up the finish. Faarooq climbs into the ring, dismisses Rock, and summons the NoD minus Rock to exit with him.

Backstage, Kelly interviews a crazed and obsessed Luna who wants to disfigure Sable.

We then revisit the previous PPV when Kane not only defeated Vader but also knocked him out of action with a wrench.

Prior to the next match, Commissioner Slaughter approaches the ring with referee Earl Hebner. He advises referee Tommy Young that he will not officiate this match. Really? A referee storyline on this show too? 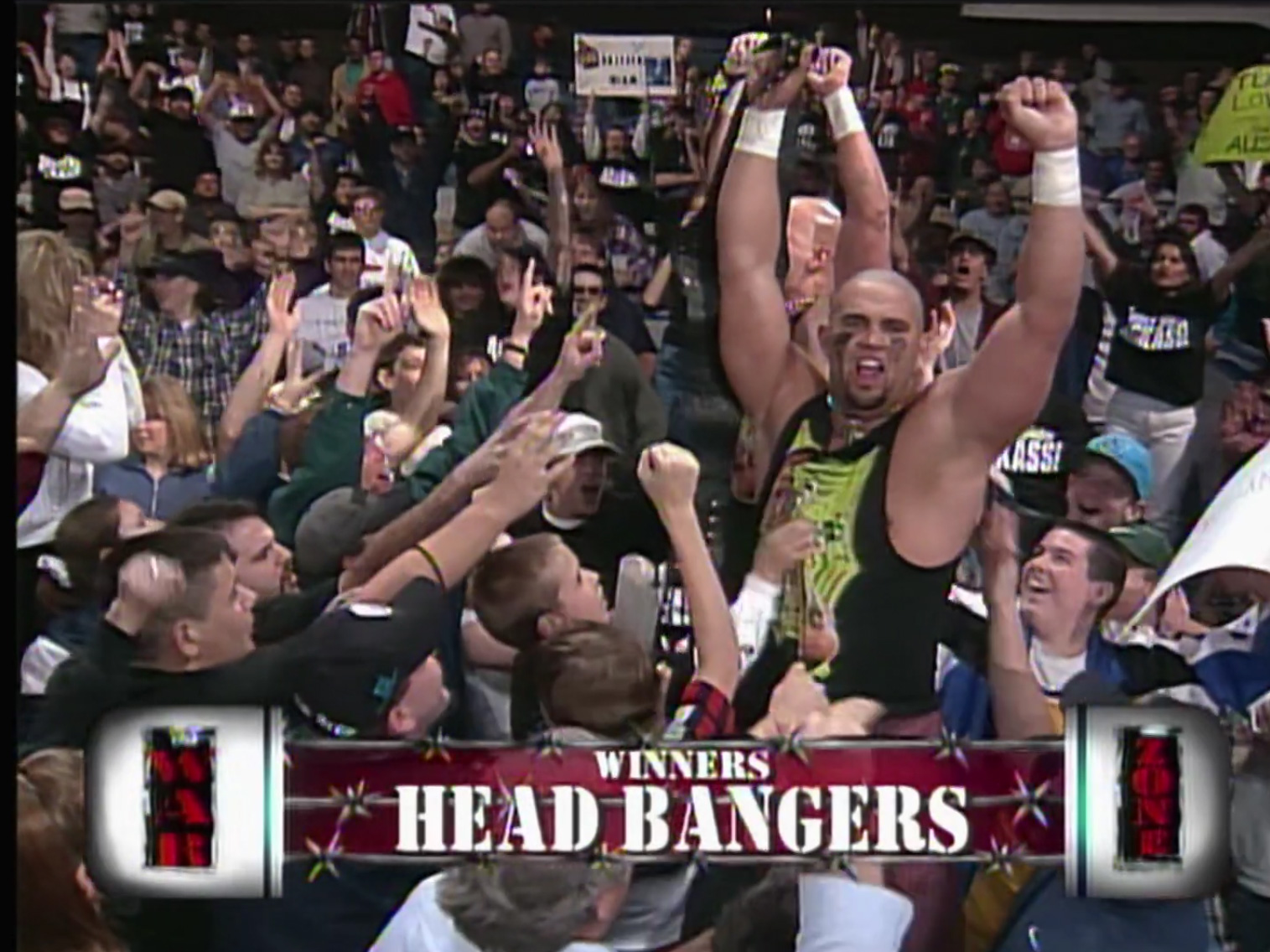 Summary: While the formula worked in telling a story, the Waco faithful used their 2-drink minimum cards to show their complete lack of interest.

Allegedly, Pete Rose, who will appear at the PPV, compares his lifetime batting average to Austin’s 3:16. This was also removed from the WWE Network version. C’mon, guys, Pete’s been banned from baseball longer than most of you have been alive. Cut him a bigger check already!

Prior to the next match, we revisit last week’s episode when Sable and Luna brawled.

Summary: Owen looked sensational while Mero played his character to a tee but lost due to his own aggression.

After the match, Sable joins Mero in the ring, but Luna tries to get to her. Goldust tries to restrain Luna while Mero does the same to Sable. As she shoved Mero down, Sable got restrained by Goldust. Mero takes exception and pounds Goldust into diced brisket. Officials continue to keep Sable and Luna at bay. 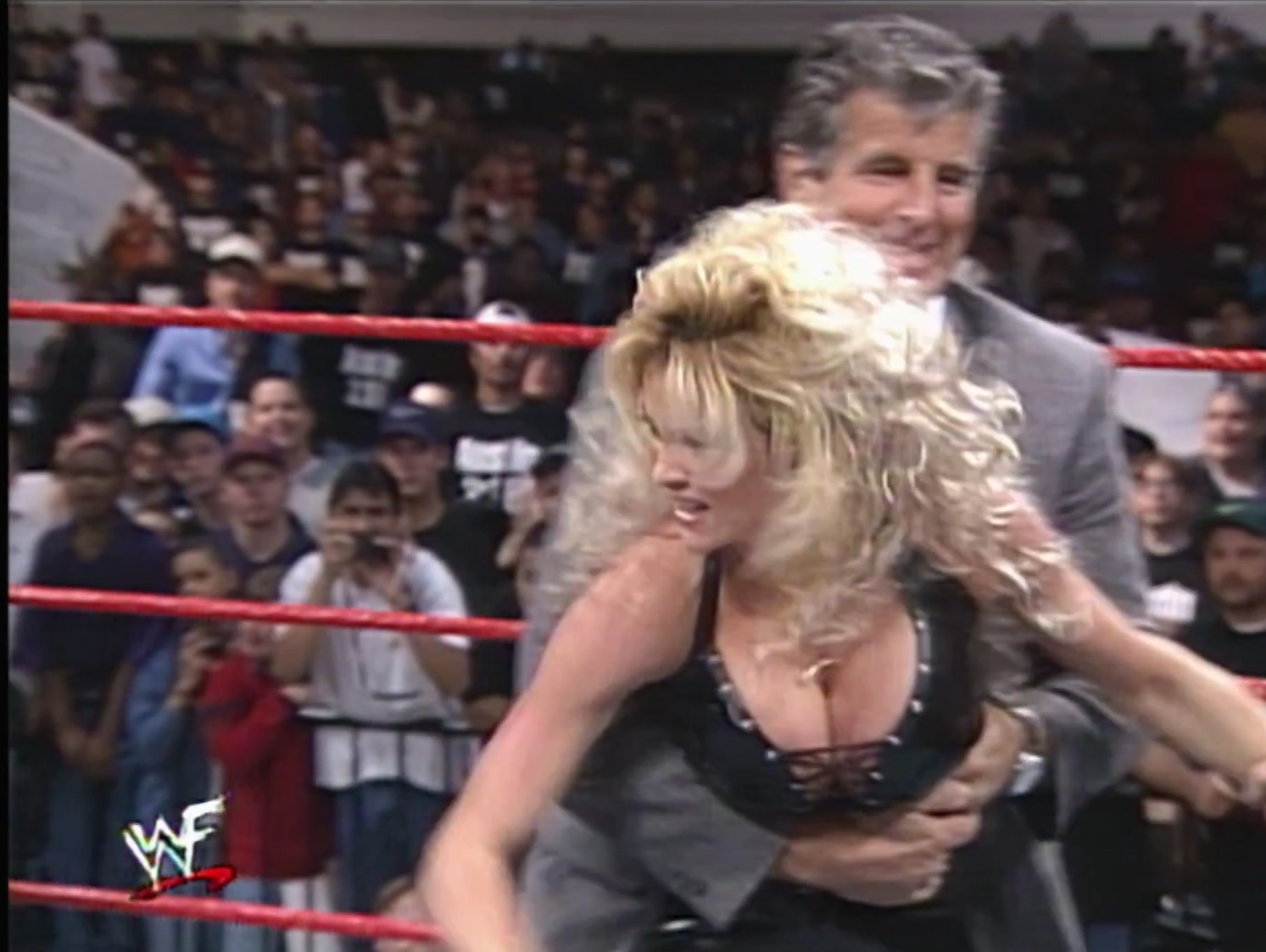 While Goldust and Luna exit the ring, Sable grabs the microphone and instructs Luna: “…get your ass back here, you little bitch.” I smell an upcoming mixed tag match at the PPV. 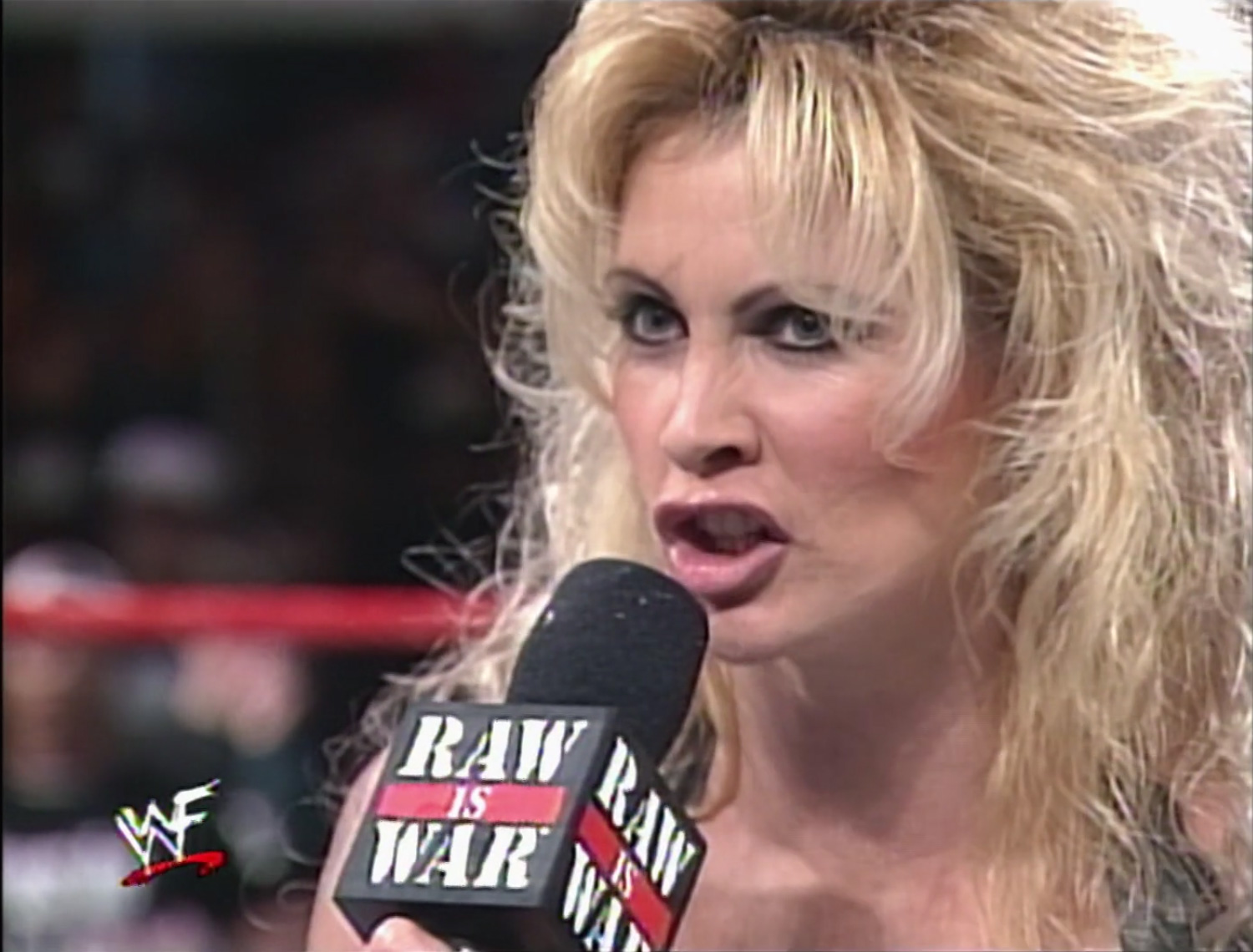 Conclusion: If table-setting was an art, the WWF would be on display at a first-class gallery. This obviously taped show was well-constructed but lacked the sizzle RAW needs to overtake Nitro.

Could RAW finally overcome Nitro in the ratings?

Who won? Nope, once again, RAW was trounced by Nitro by over a whole ratings point. This taped crap needs a serious breather, and some real eye-popping moments need to happen or RAW is going bye-bye. Nitro’s star power alone is carrying them over RAW each and every week and I don’t see that changing in March.