Taped from Evansville, IN

What’s up with Austin and DeGeneration-X? How does Chyna play into this? How will Tyson be involved at WrestleMania XIV? Let’s find out!

Sunny, while portraying Marilyn Monroe, sings “Happy Birthday” to “Classy” Freddie Blassie. That’ll get the show on an upward swing. 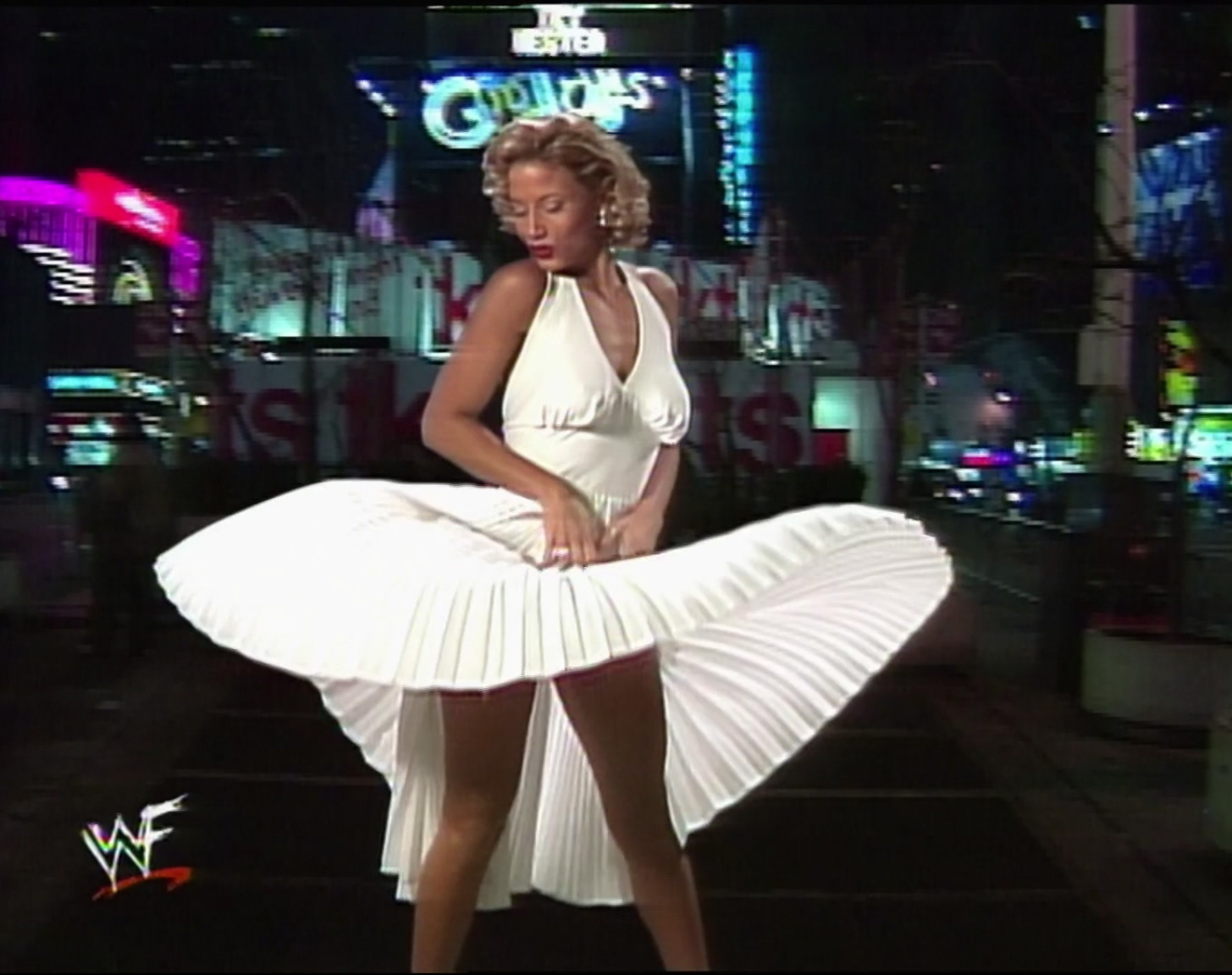 To open the show, Stone Cold Steve Austin enters the ring carrying a bag. With the Evansville faithful chanting his name, Austin admonishes Michaels for his behavior last week. He then beckons Michaels to the ring.

Instead, DeGeneration-X appears on the Titantron, and Michaels asks for a single reason to join him. Austin provides the reason--he has the WWF belt with him. When Michaels questions him, he grabs a velvet bag and pulls out a toy replica. HA! Austin produces the WWF belt out of his bag which infuriates Michaels.

RAW is WAR is sponsored by FootAction USA and Skittles.

Prior to the opening match, we turn back the clock two weeks when Windham HAMMERED Animal with Cornette’s tennis racquet.

Summary: The rating is solely for Pierre’s high-flying while the Evansville faithful took a collective nap during the match.

Backstage, Chyna gets Los Boricuas’ attention and recruits them to locate Austin while speaking Spanish.

WWF REWIND: DX beats and ties up Austin so that Michaels can lay in the smack talk.

Prior to the next match, we revisit Shotgun Saturday Night when Pantera inadvertently cost his team a win by moonsaulting Michinoku.

Summary: Nothing but high-flying junk. Are they TRYING to lose to Nitro with this shit?

After the match, Michinoku remains OUT COLD.

Kelly shills No Way Out this Sunday LIVE on PPV this Sunday. Order NOW!

Kane and Bearer come to the ring while a replay of Kane’s tombstone of Vader from two weeks ago is shown. As we see Vader extinguish Kane during last week’s episode, Kane sets fire to a Vader analog clock. In the meantime, Bearer cuts a promo on Vader and mentions the lack of Undertaker thanks to Kane.

FOOTACTION SLAM OF THE WEEK: From Shotgun Saturday Night, the Rock provided the not-yet-named Rock Bottom to Tom Brandi. Cornette can be overheard correctly calling it a uranage.

Prior to the next match, the Rock uses human cloning to insult the Evansville faithful.

Match 4: The Rock & Faarooq (w/ the Nation of Domination) versus Ken Shamrock & Chainz (w/ the Disciples of Apocalypse)

Summary: As you’d expect, Shamrock and the Rock were the workhorses in the match, but the Rock failed to capitalize on his heat with the Evansville faithful.

After the match, Shamrock attacks each member of NoD, and the faces clear the ring. A crazed (loopy?) Shamrock hooks a belly-to-belly suplex on referee Mike Chioda. Upon doing the same to Chainz, the babyface team restrains Shamrock whose marbles must no longer be connected upstairs.

WrestleMania XIV is only seven weeks away!

This past Thursday, the WWF held a press conference at the All-Star Café in midtown Manhattan to hype WrestleMania XIV. Vince McMahon announces that “Iron” Mike Tyson will be a special guest enforcer outside the ring for the main event. Next, Austin introduces himself and is very “serious” about his opportunity. He then runs down Michaels who offers a LaTrell Sprewell-PJ Carlesimo comparison between Austin and Vince. For those unaware, Sprewell attacked head coach Carlesimo on December 1, 1997.

Tyson offers his love for the WWF and Bruno Sammartino, but Michaels will “try him any day of the week.” Austin believes he also can beat Tyson in a boxer-versus-wrestler match. While Michaels and Austin jaw jack with one another, Tyson must separate them. Afterward, extensive media coverage of the event is shown.

Following a commercial break, Chyna leads Los Boricuas into the men’s locker room and manhandles an unknown wrestler. Of course, her search comes up fruitless.

Summary: One of the WORST segments in RAW’s history, as no one gave a shit about either the wrestlers or the babbling idiot from the makeshift platform. If I wanted to hear Jackyl onstage, I’d listen to this.

After the match, Jackyl gets in Recon’s face and trash-talks him. When Jackyl slaps him, he turns his back on his minions. Recon, as if mesmerized by his cult leader, refuses to hit Jackyl from behind.

Following a VERY necessary commercial break, the New Age Outlaws emerge while wearing University of Kentucky t-shirts. They then tease about the dumpster stunt from last week and wheel out “a new Cactus Jack condominium”—a dumpster. Next, a replay of the dumpster ride from last week is shown on the Titantron as this episode continues to waste airtime.

While we revisit scenes from last week’s aftermath, the NAO perform with the most god-awful acting this side of Ben Affleck. They then push the dumpster from the stage onto a crash pad on the floor. As they open the dumpster, the NAO pull out two crash test dummies.

On second thought, the “victims” look like blow-up dolls which sinks this episode into depths I’ve not seen before. JR has the gall to shill their upcoming tag title match at the PPV against the hardcore legends. Uh…there’s being professional, and then there’s calling shit brown. Finally, NAO cuts a promo on them. To top off this dreck, we have dumpster-cam footage!

Following another much-needed commercial break, Chyna huddles with Los Boricuas who search for Austin. Speaking of Austin, he chains and locks the door behind Los Boricuas restricting their re-entry into the arena. HA! When Chyna discovers that Austin outsmarted her, she yells “Dammit” and tosses furniture. 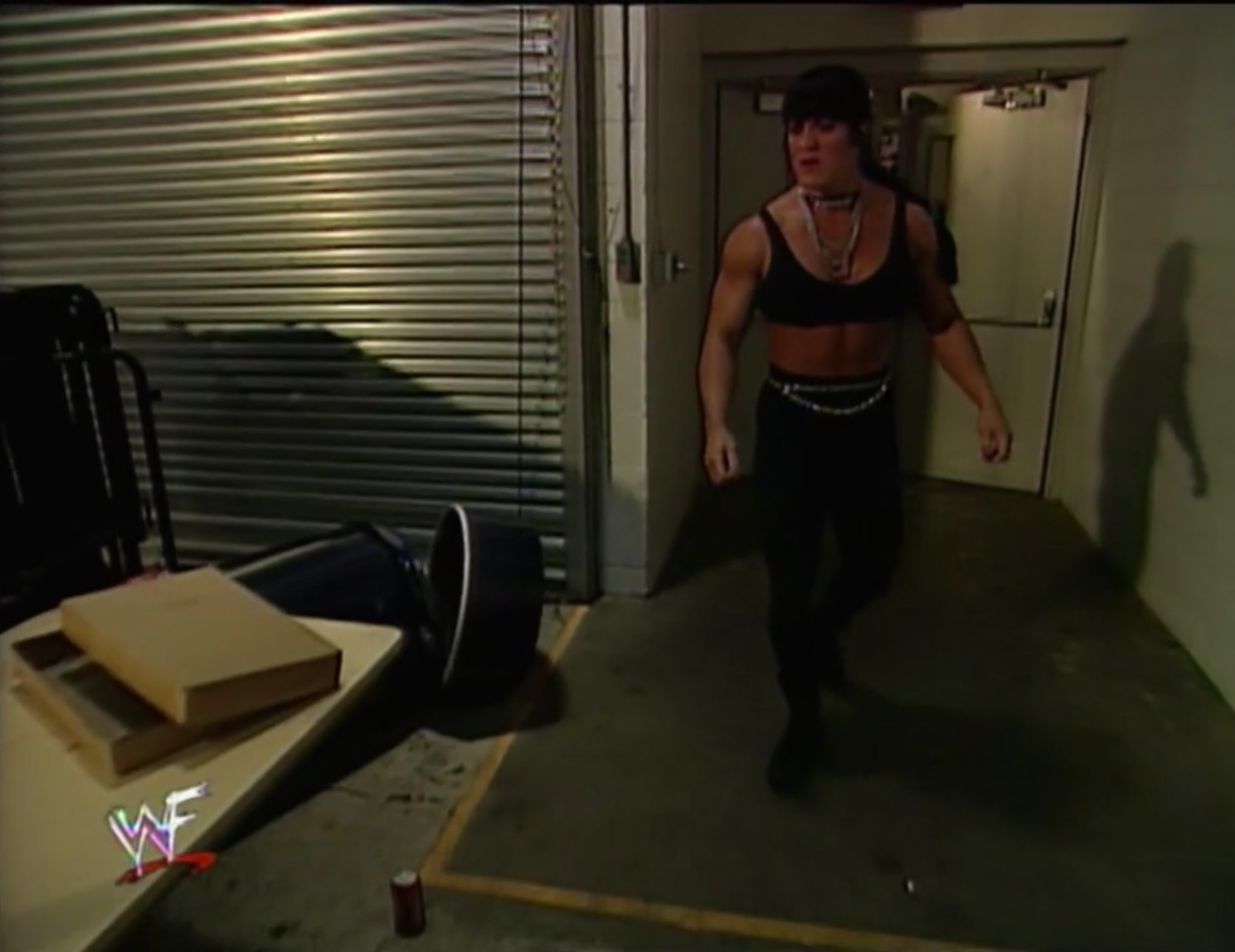 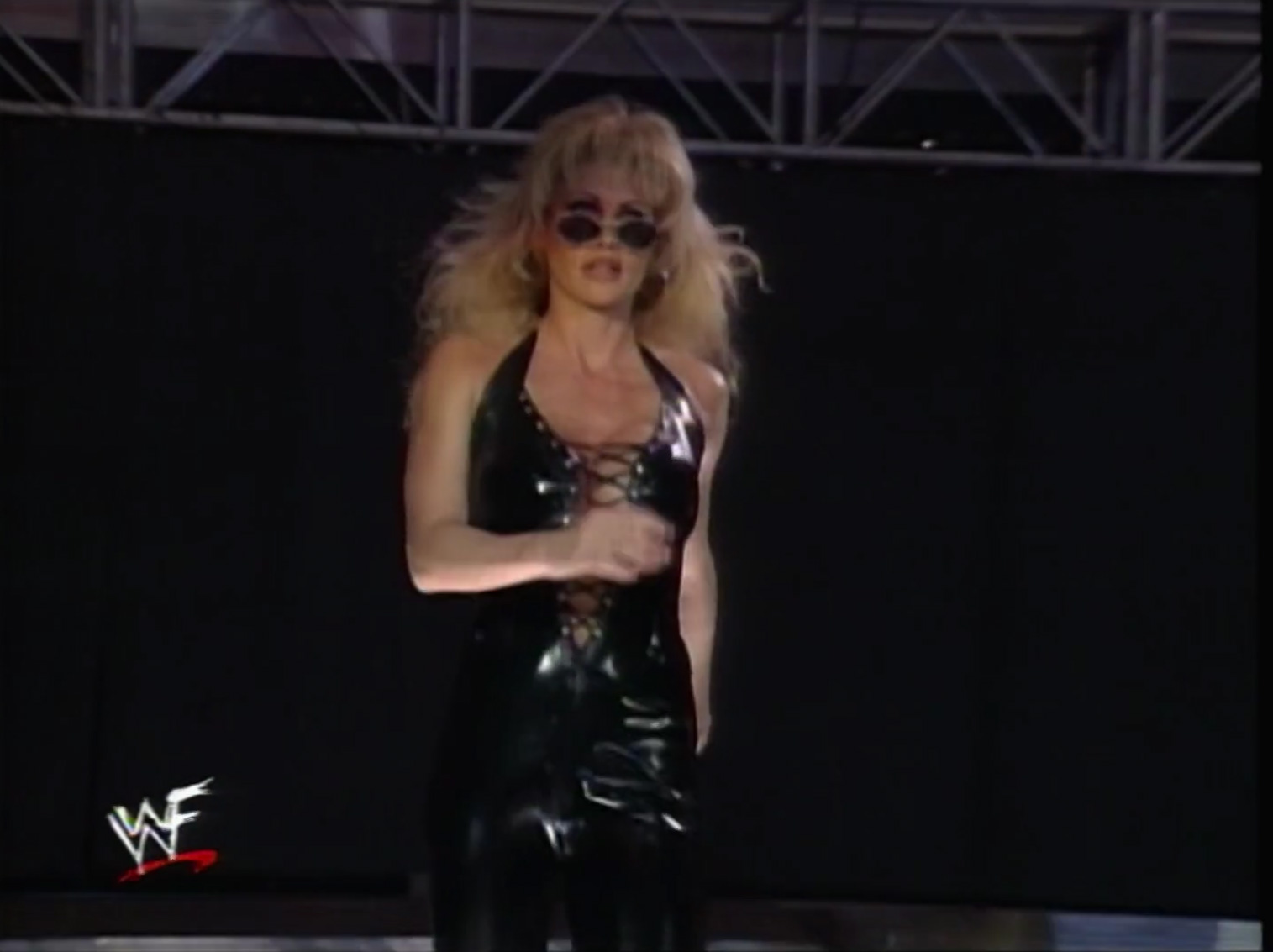 Summary: The * rating was solely for Sable’s involvement. The rest was meaningless.

After the match, Luna gets in Sable’s face but gets slapped too. Reminder to self, don’t piss Sable off! 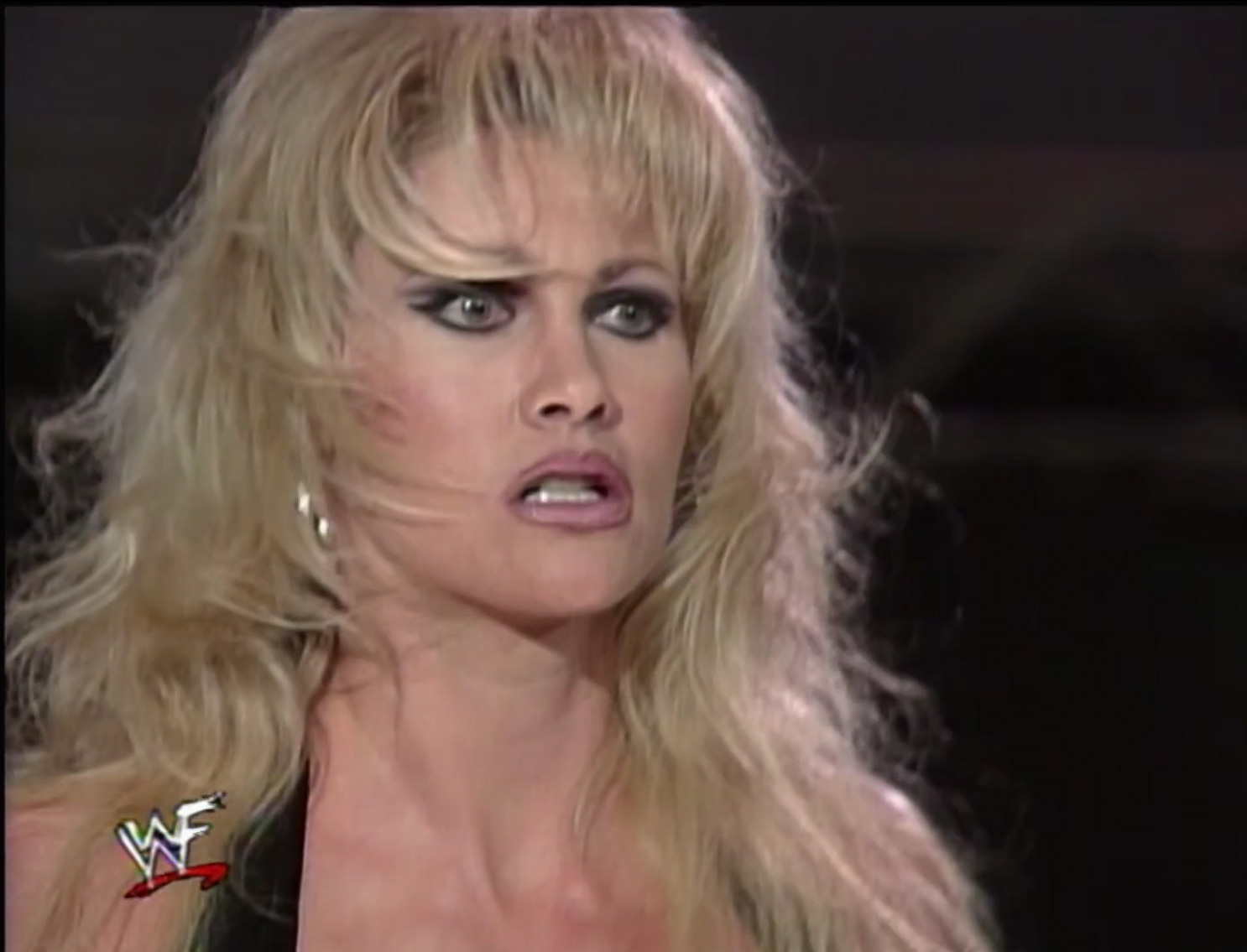 Suddenly, as things look bleak for Austin 4-on-1 again, Cactus Jack and Chainsaw Charlie emerge through a hole in the ring. Seemingly through the crowd, Owen Hart joins the babyfaces in the ring to even the odds. They then send the heels scattering backstage to end this putrid episode. 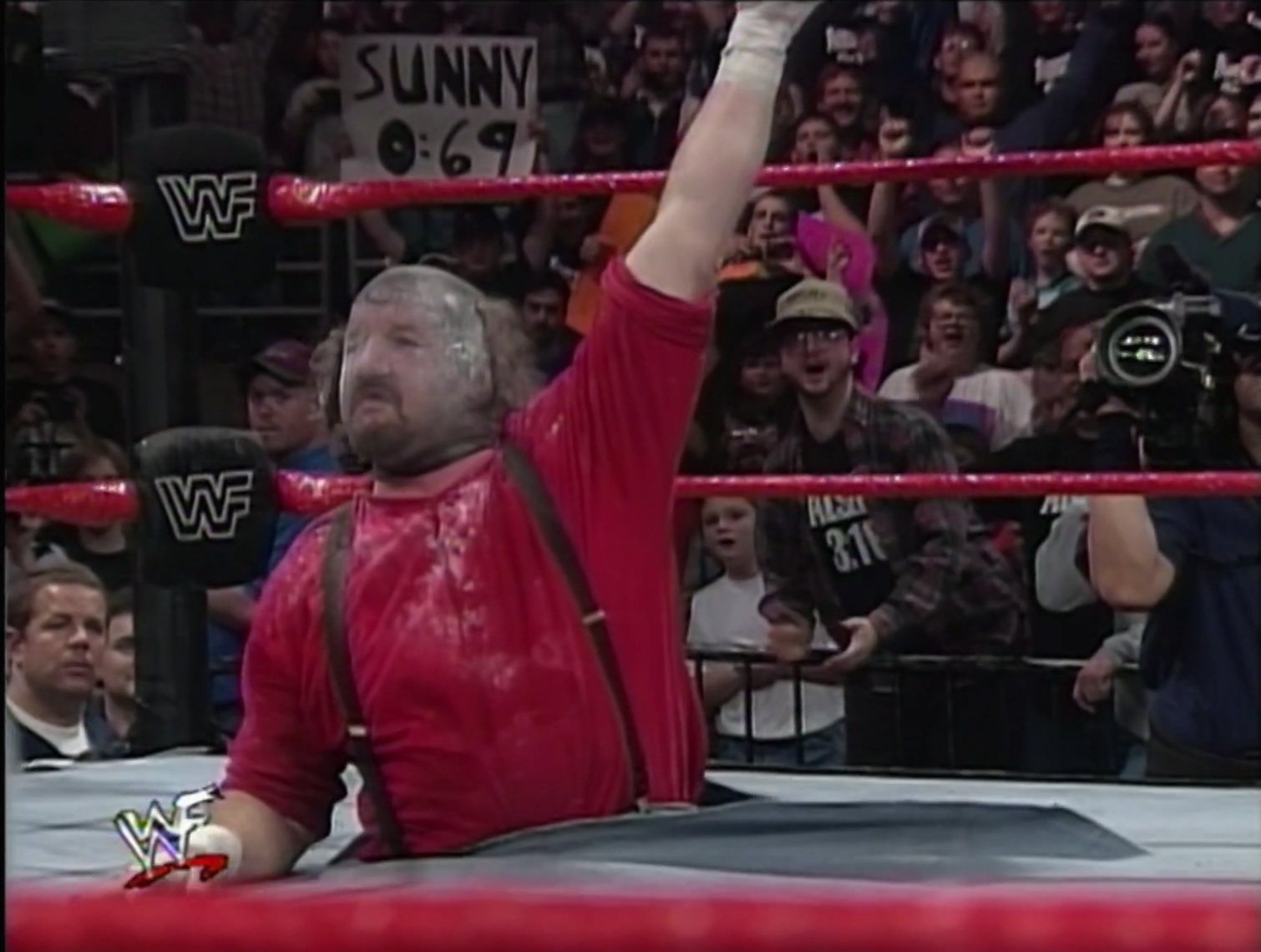 Conclusion: WORST. GO-HOME. SHOW. EVER. Where do I start?

Could it even come close to matching Nitro in the ratings?

Who won? Absolutely NOT.

Nitro trounced RAW once again while demonstrating how to program wrestling that makes people want to watch. Next week, RAW is scheduled to air on 2/21 due to the Westminster Dog Show, so Nitro will be unopposed. Pray for me while watching them, please.