Can the Steiners achieve tag team gold once again? Or will the nWo have something to say about it? How will Hogan and Savage settle their differences? Will Goldberg remain undefeated against Regal? Let’s find out!

To open the show, Hogan and Bischoff emerge through the entrance as the WWE Network can barely contain “Voodoo Chile.” Not that I’m complaining. While the El Paso faithful chants “We Want Sting,” Hogan’s “sick of the gaga.” He then cuts a promo on Savage and challenges him to a match TONIGHT.

Amongst the El Paso faithful, Savage accepts Hogan’s challenge by stating he’s “gonna beat you from El Paso…to Juarez.” He then promises to replace Hogan at the PPV to face Sting. Nevertheless, Hogan’s PISSED. 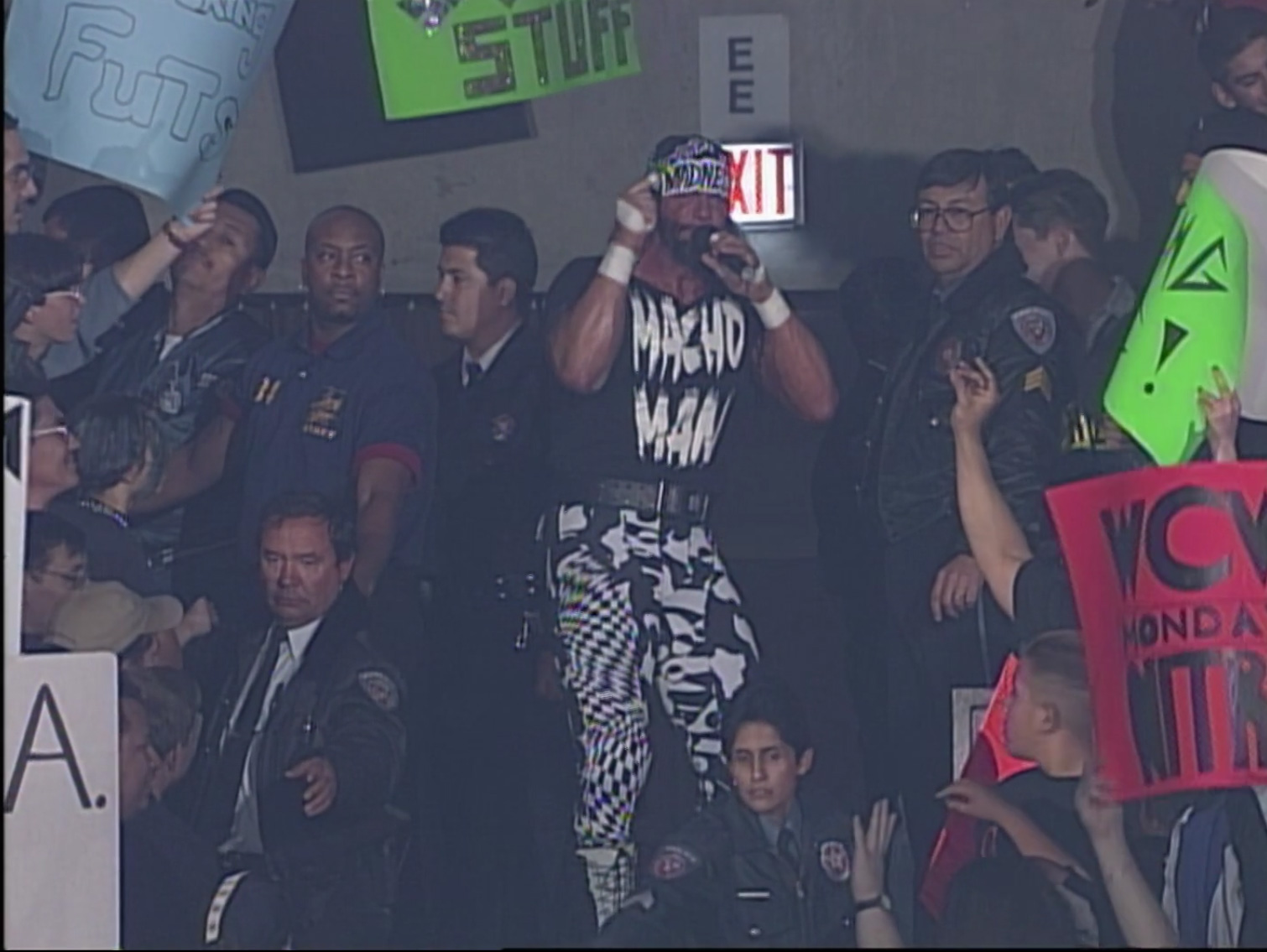 The Nitro Girls dance in the ring wearing black and purple. Hopefully, they wear these colors again in Sactown in two weeks.

Shockingly, the “Living Legend” Larry Zbyszko did not appear for tonight’s show.

We then revisit Nitro from two weeks ago when Mongo struggled yet lost to the “British Bulldog” Davey Boy Smith. The following week, Mongo and Smith brawl to a double countout.

Immediately following the match, Mortis storms the ring to attack Mongo. He supplies Mongo with a side-Russian leg sweep while James Vandenberg cackles in glee. As Mongo returns to his feet, he grabs Vandenberg and CLOBBERS him. He then tombstones Mortis much to the delight of the El Paso faithful. Upon taking the microphone, Mongo cuts a quick promo on Smith.

While Spicolli holds Zbyszko’s bags including a Haliburton, he’s “unsure” of Zbyszko’s whereabouts. 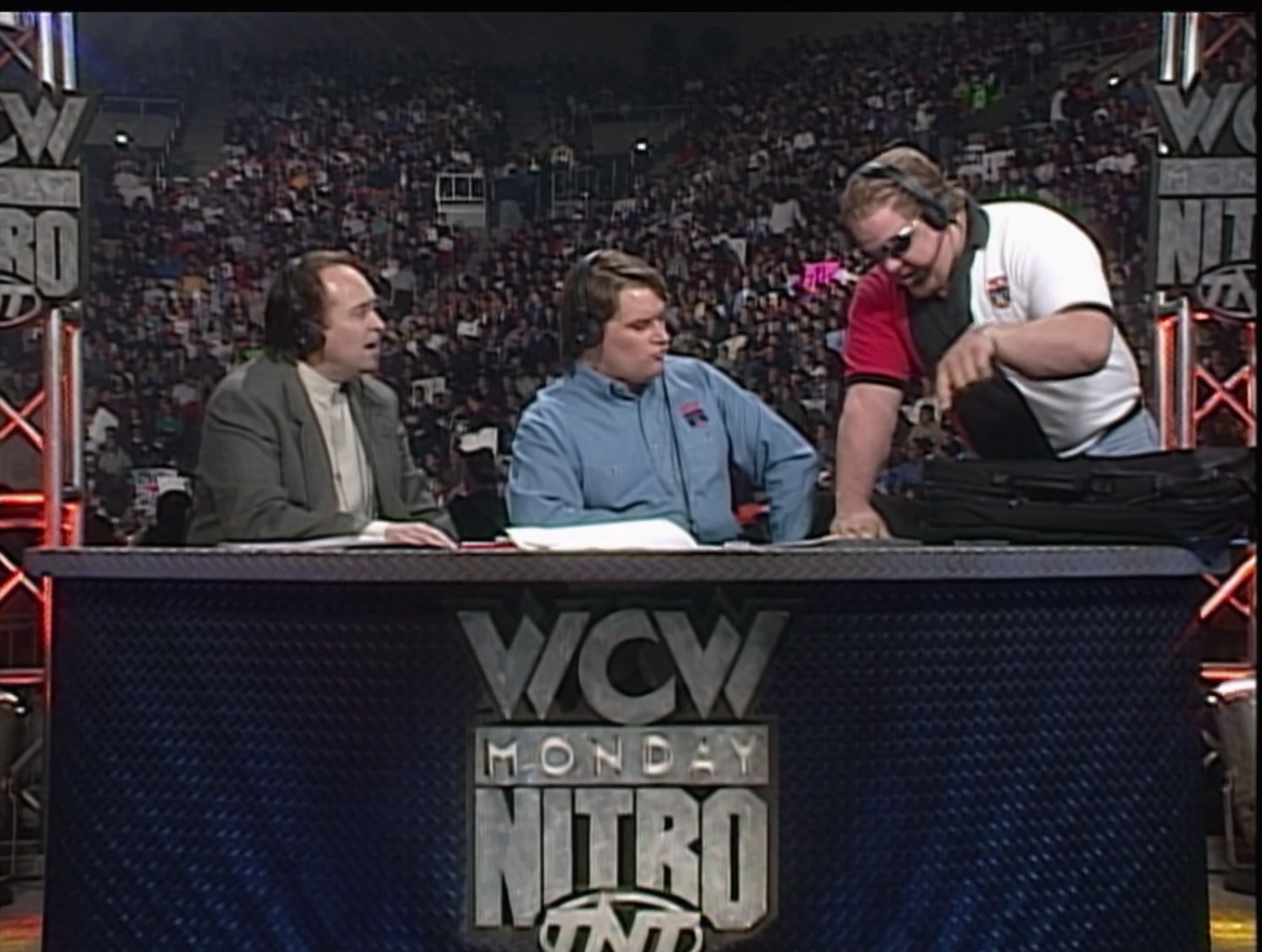 At the entrance, Tenay interviews Brad Dillon of General Motors Motorsports. Brad announces that Lance Hooper will drive the #23 Pontiac Grand Prix in the Busch Grand Nationals for WCW. Back in ’98, this gets a 90-second spot on Nitro. If it were today, this announcement would lie solely on their web site.

Nitro Girls emerge through the entrance, and three of them dance in red and white. Go Wolfpack! Meanwhile, Schiavone shills the Nitro Party contest.

Prior to the next match, referee Nick Patrick stands in the ring. However, Chairman of the WCW Executive Committee JJ Dillon informs Patrick of his current suspension and asks him to leave. As Patrick proclaims innocence, he illustrates his loyalty to WCW but also subtly bemoans Dillon’s WWF days. He then warns Dillon of a lawsuit, but Dillon ejects him from the ring.

Summary: While Nagata brought the workrate, Disco’s on a winning streak, and the El Paso faithful LOVE it. Of course, copying Stone Cold Steve Austin’s finishing move has NOTHING to do with it.

After the match, La Parka hits the ring with a chair and WHACKS Disco in the back with it. In true La Parka-style, he struts and dances with the chair. A confused Nagata asks Onoo what the deal is, and La Parka SMASHES the chair into his back. 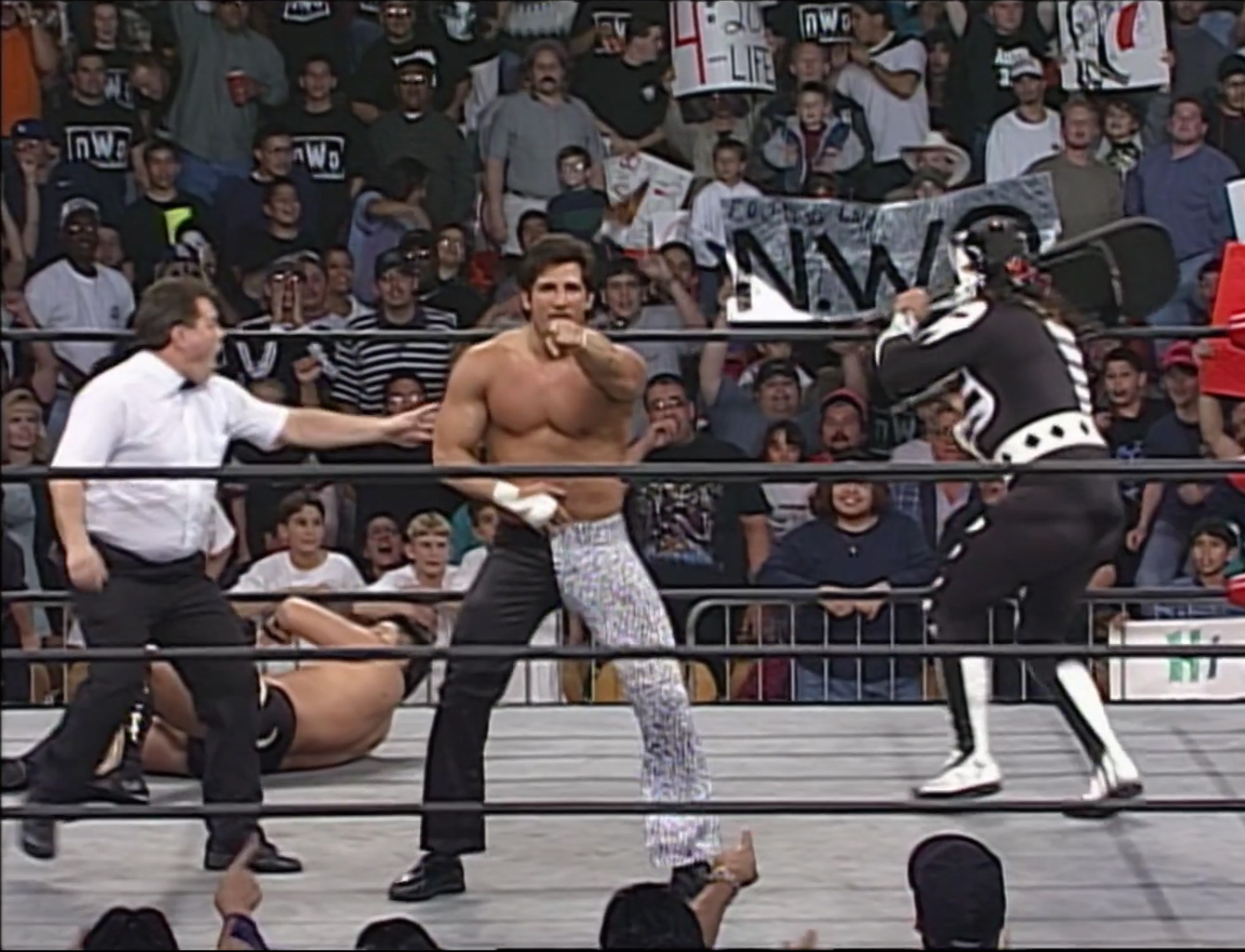 Behind a missing promo for the Savage/Luger matchup at the PPV, Tenay interviews the “Total Package” Lex Luger at the entrance. Luger is “sick and tired” of Hogan and Savage and shills the PPV main event. Although he’d love for them to “beat each other into a bloody pulp,” he’s got his gear on to clean up the remains.

Summary: Superb match with Eddie basking in the glow of his hometown fans. Great work, gentlemen!

Summary: The lucha portion of the El Paso faithful loved this match, and Guerrera’s high-flying was well-received.

After the match, Jericho sprints to the ring to ambush Guerrera. He whips Guerrera into the ropes but eats a dropkick. Upon grabbing the microphone, Jericho tells lies like there’s no tomorrow. Guerrera also grabs a microphone and speaks Spanish to his Latino brethren among the El Paso faithful. As Jericho tries to “translate,” he rightfully states that Guerrera wants a shot at the Cruiserweight title. Wrongfully, he refers to Guerrera as a “flash in the pan” and “one-hit wonder” like Dexy’s Midnight Runners. Come on, Eileen, er, I mean Jericho!

Nonetheless, Jericho asks him for collateral (“besides a ’68 rusted-out El Camino”). Guerrera states that he has a lot of heart yet offers his mask. Jericho accepts the title versus mask stipulation for their match at the PPV.

Summary: This match has historical significance for all the wrong reasons. If you’ve been following my reflections, Goldberg’s matches don’t last five minutes. Some don’t last sixty seconds. Regal tries to outwrestle Goldberg who has NO CLUE how to wrestle a catch-as-catch-can style. Some folks would say that Regal exposed Goldberg. Simply put, Goldberg is a rookie who understands power wrestling instead of chain wrestling.

According to Regal’s book, he weighs about 280 lbs. and looks “like a badly-made bed” for this match. He relates that Goldberg “apologized” by saying “I’m sorry. I just didn’t know what to do out there.” On a podcast with Steve Austin, Regal mentions that he wasn’t fired for this or on this day. Instead it was “months later” due to being a “mess.”

On a podcast with Ross, Goldberg “trusted” the veterans but felt that Regal “took liberties.”

HOT TAKE: Internet folklore refers to this match as a “shoot.” Regal tries to get Goldberg to fight back, but Goldberg freezes. When you’re inexperienced, sometimes you just don’t know what to do. Before being terminated, Regal wrestles one more match on WCW Saturday Night with Dave Taylor against the Steiners. As you’d expect, they lose.

Nitro Girls dance in the aisle wearing black and white. Have THEY joined the nWo?

Summary: More on this story next week, but this was the final match in WCW involving Spicolli.

After the match, Spicolli continues to beat down Adams with the Haliburton. Suddenly, Zbyszko FINALLY shows up for work. Why wasn’t he fired? Notwithstanding, he chases after Spicolli until Spicolli hightails it backstage. Zbyszko cuts a promo on Spicolli to end the segment.

Video featuring Booker T airs. This is what Booker T has needed to get over in WCW.

Summary: Solid match where Saturn knew how to counter most of Dragon’s holds.

THUNDER RECAP: DDP retains the US title thanks to Raven and the Flock.

According to Schiavone, Benoit and DDP will have a rematch at the PPV.

Raven enters the ring followed by Booker T. Upon grabbing the microphone, Raven cuts a promo on Benoit. He then turns his attention to Booker T who, according to Raven, has “property belonging to Saturn.” After Raven summons the Flock, Sick Boy hits Booker T with a springboard dropkick. He then clotheslines Booker T who sells with a 360°.

Next, Riggs tries to double-team Booker T with Sick Boy, but heel miscommunication ensues. Booker T unleashes a scissors kick to Riggs and flattens Lodi with a forearm. While Kidman takes a turn, he suffers a spinebuster from Booker T. Raven attacks Booker T as the El Paso faithful LOUDLY chants “Raven sucks.” Upon taking a back drop from Raven, Booker T displays a Spinaroonie. Woohoo!

Hammer distracts Booker T just enough so that Raven can DDT him. While Raven yells “feel our pain” at Booker T, Saturn hooks the Rings of Saturn upon Booker T. 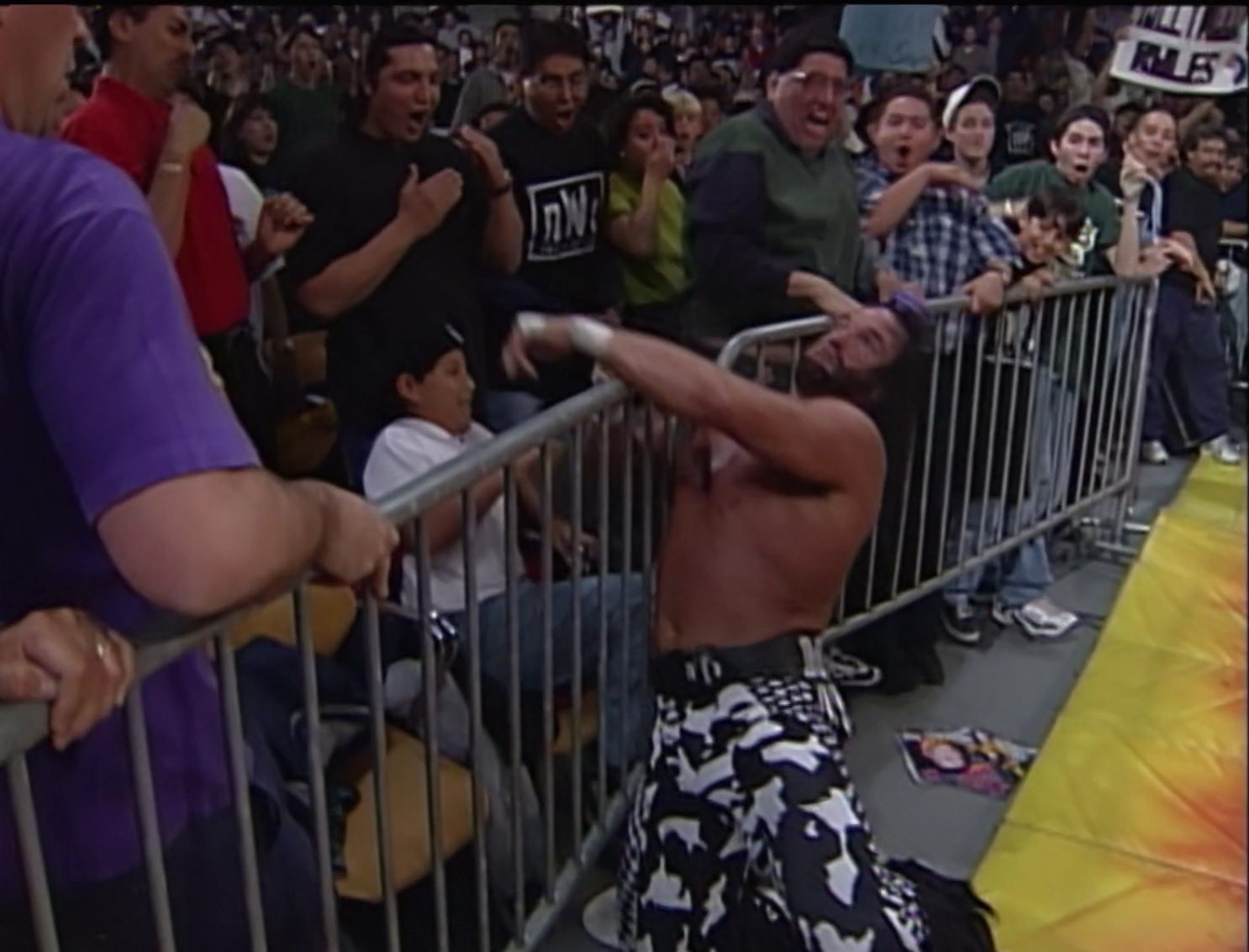 Summary: If not for fame and Savage’s high-flying and the admiration from the El Paso faithful, this match wouldn’t rate worth a nickel.

After the match, the nWo gangs up on Savage, and Hogan CAVES IN Savage’s skull with a chair shot. Hogan then chastises Savage, and the nWo leaves the ring. Right before the commercial break, Savage revives and ambushes Hogan from behind.

Luger approaches the ring, grabs the microphone, and wonders where Savage is. While Elizabeth distracts Luger, Savage slides into the ring and attacks Luger. He guillotines Luger with the top rope, slams him, and mounts the top turnbuckle. Before Savage can deliver a big elbow, Sting emerges and knocks Savage down to the mat.

He then grabs Savage and makes him taste the steel railing. It must have tasted like the Lockjaw at Wind Daddy’s. Afterward, he rams Savage back-first into the steel railing. He then sets Savage up for the Scorpion Death drop, and the nWo re-emerges. Sting PLANTS Savage with it, and Hogan slowly makes his way into the ring.

Unfathomably, a large net falls from the ceiling trapping both Luger and Sting. That allows the nWo to attack full force upon our trapped heroes. How dastardly! 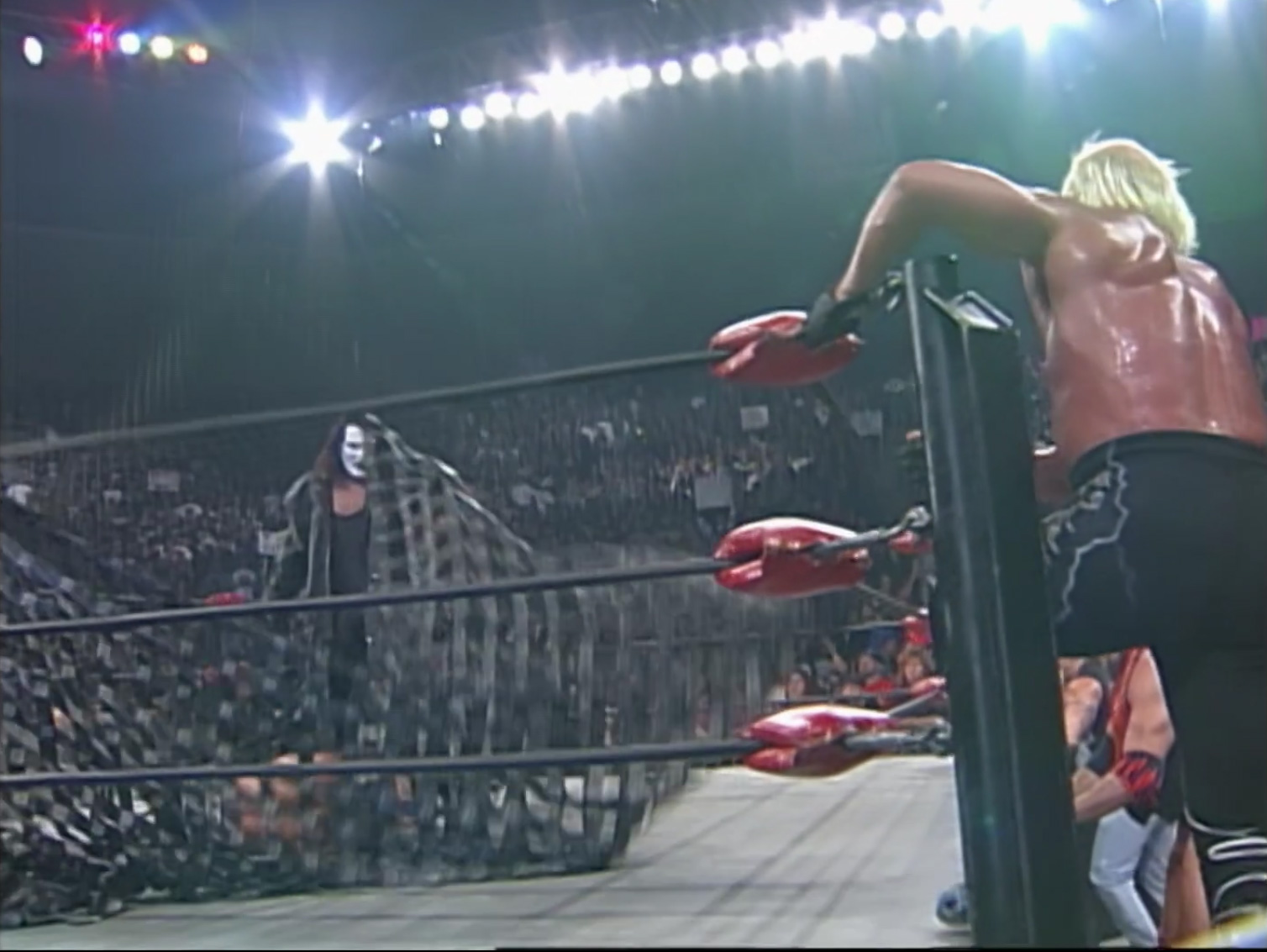 Nitro is sponsored by the movie Dark City. Never heard of it. After careful research, Rufus Sewell plays the main character, yet I believe I’ve only seen him in The Man in the High Castle. Out of respect for those who may be offended, I will not post a picture of Sewell in costume for the aforementioned TV show.

At the entrance, the Nitro Girls dance in black and white. Get some new costumes!

Prior to the main event, we revisit last week’s episode when Scott didn’t tag in Rick yet won the match. Next, we revisit Thunder while DiBiase tries to keep the peace between the Steiners.

Of course, Hall performs his survey, and El Paso is undoubtedly nWo country. Nash throws a shout-out to his “boy-at-home” Syxx and wishes him a speedy recovery.

Summary: Despite all of the differences and arguments between them, the Steiners are once again World tag team champions.

After the match, Rick celebrates with the belts, and Scott ultimately hugs him. Aw. 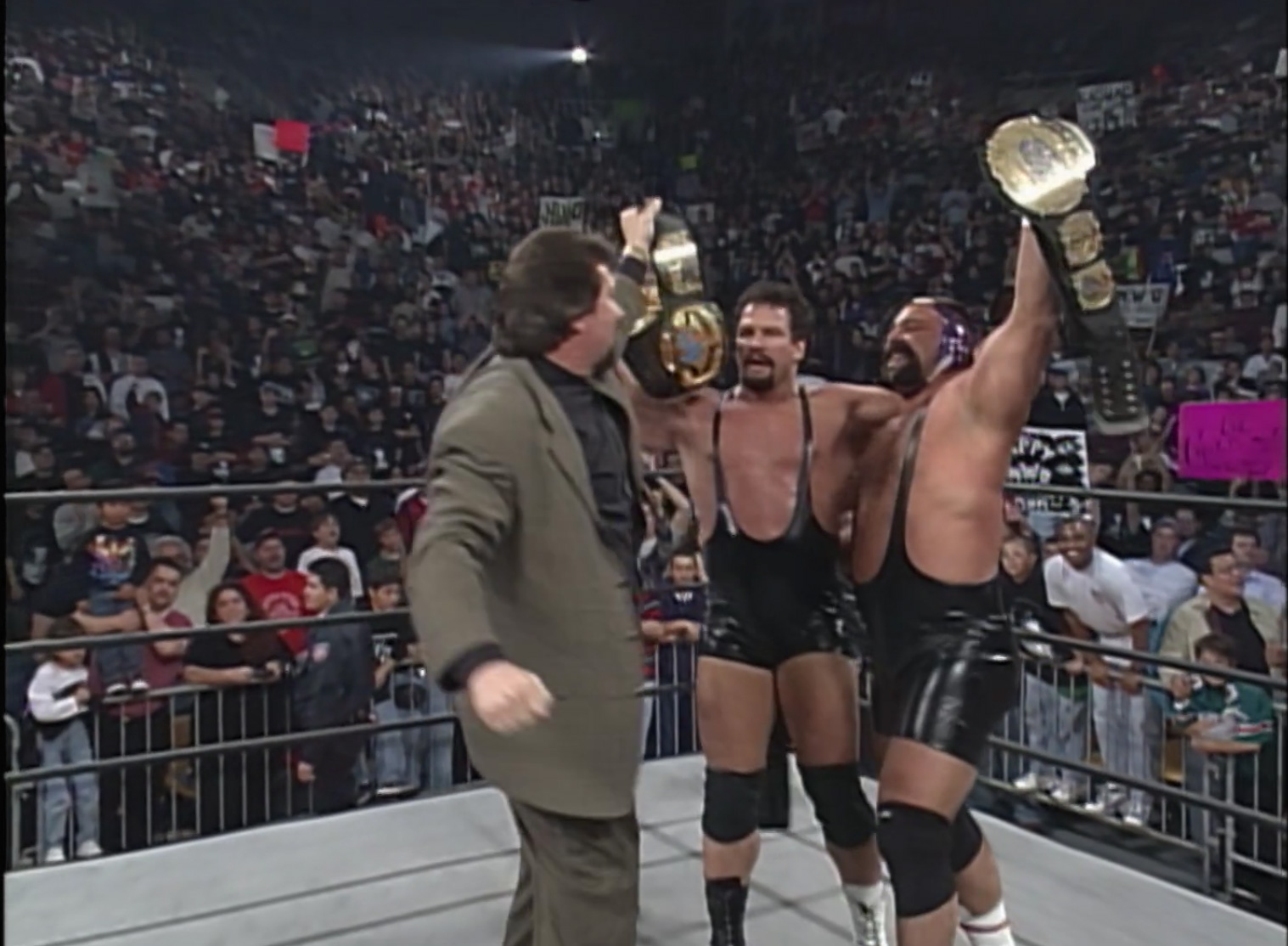 Conclusion: First, in case you didn’t already know, February is sweeps month for TV networks. That means that they’re going to pull out all of the stops to garner ratings for the sake of advertising dollars. In Nitro’s case, they spared no expense to capture and maintain a high TV rating for all segments.

Second, top to bottom this is a stacked Nitro episode that didn’t give the wrestling audience an opportunity to tune into RAW. While some of the matches lacked pure wrestling enticement, they contained excitement either through star power or storyline. What’s on RAW is WAR?