Can Owen dethrone HHH for the European title? How will the WWF capitalize on the Austin-Tyson hoopla? What’s new with Goldust and Luna? Let’s find out!

To toot its own horn, snippets from several TV and print media of the Tyson-Austin confrontation from last week are shown. Will Tyson be a special guest referee or fight Austin at WrestleMania XIV?

Prior to the next match, we get pre-recorded comments from Windham and Jarrett. Windham refers to Bradshaw as “Yosemite Sam.”

Summary: Southern-fried 80s-style tag wrestling match which, while entertaining, was outdated and unnecessary in 1998.

RAW is sponsored by Twix.

Replay airs of the Austin-Tyson confrontation from last week.

Back in the locker room, HHH, while only wearing a towel, channels KISS while cutting a promo on Owen. Michaels then chastises Austin for besmirching Tyson’s moment and subtly offers to be the guest referee for a match between Austin and Tyson.

Prior to the next match, we revisit Vader-Goldust from Royal Rumble ’98 when Luna took a ride during a Vader bomb. 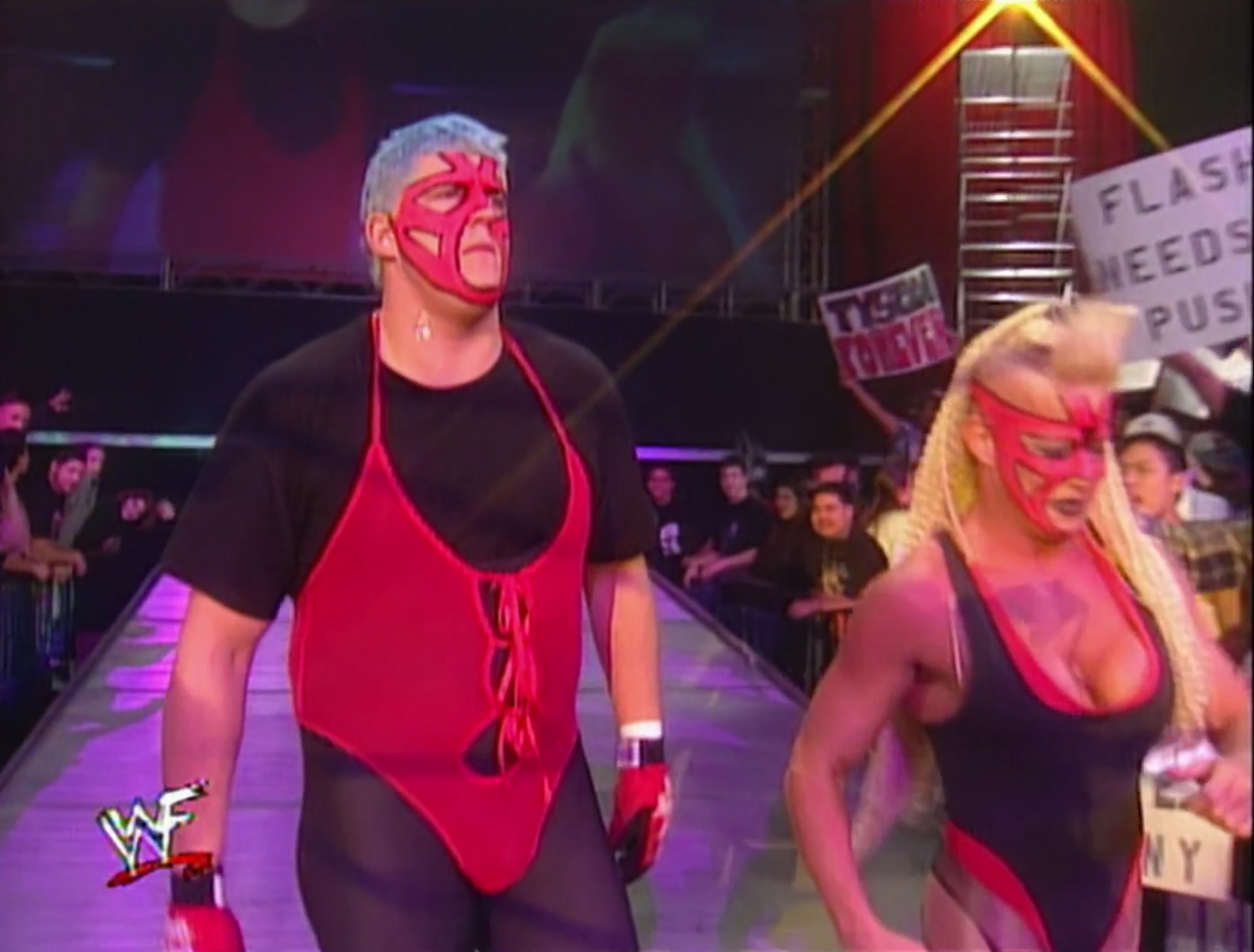 Summary: Waste of time until the storyline kicks in.

As expected, Kane emerges and heads to the ring. Vader meets and brawls with him. Amazingly, he piledrives Kane! After Vader nails Paul Bearer, Kane sits up, legitimately struggles to lift the over 400-pound Vader, and tombstones him.

To tear down the fourth wall, a conversation prior to the show between Mick Foley and Terry Funk occurs. While I wouldn’t mind sitting down and having some beers with them, QUIT WASTING MY TV TIME!

Summary: Both teams were just going through the motions, and neither one cared.

After the match, Road Dog charges at Cactus with a chair but eats it himself. Cactus then removes Road Dog’s cup and kicks a 50-yard field goal. HA! While Cactus crowns Road Dog with a chair, Charlie provides Gunn with the same treatment. From the apron, Cactus launches a Cactus elbow with a chair to Gunn.

To prove his viciousness, Cactus applies a Mandible claw to referee Jim Korderas. With reckless abandon, Charlie pumps a ton of steel into Road Dog in the form of a chair. They then stack chairs atop Road Dog, and Charlie launches a moonsault onto him. To say the least, the champs have been FLATTENED. The post-match shenanigans were infinitely better than the match itself.

Summary: Good workrate and an exciting tope suicida, but if I had to choose, I’d rather walk. Pantera will meet Michinoku for the Light Heavyweight title at the PPV.

After the match, Lawler, who said he would shake the winner’s hand, enters the ring, shakes hands with Pantera, and knocks him into the middle of 1999.

Backstage, DX interrupts Cactus and Charlie’s interview, and the NAO attack the “hardcore legends” from behind. With the help of Shawn Michaels, the heels leave the legends laying.

Match 6: The Quebecers versus the Headbangers

Summary: They followed the formula, but the Davis faithful wasn’t buying it.

After the match, the Quebecers attack the Headbangers and deliver their finisher. 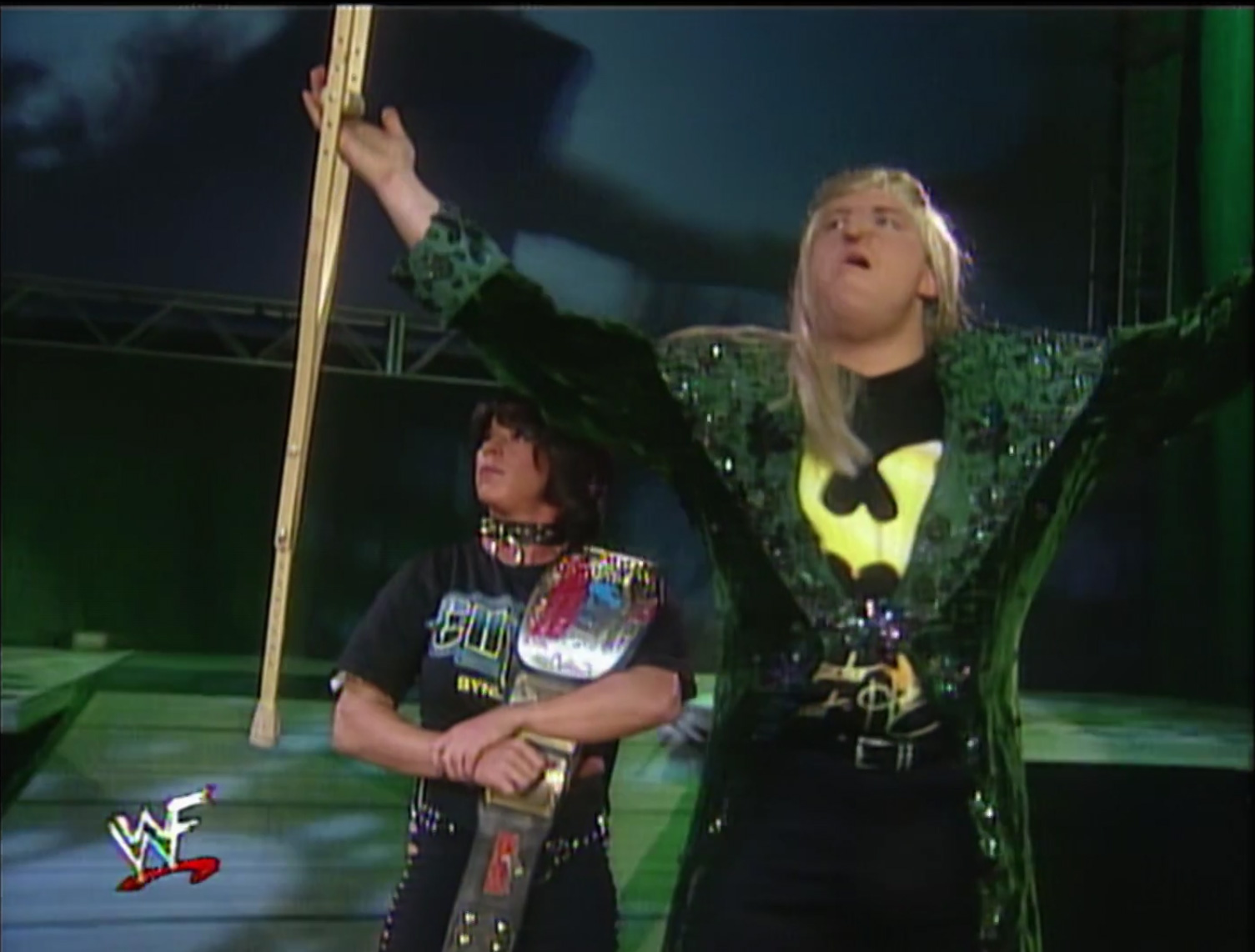 Summary: Goldust’s impersonation of HHH was quite accurate, yet Owen knew how to beat him. Does he win the title?

After the match, HHH appears on the Titantron, and DX laughs at the bait-and-switch. Abruptly, Commissioner Slaughter comes to the ring and makes a “judgment call.” He then informs HHH that the title has changed hands! WE HAVE A NEW CHAMPION! While Owen celebrates, HHH pitches an ABSOLUTE FIT in the locker room. The joke is actually on HHH. 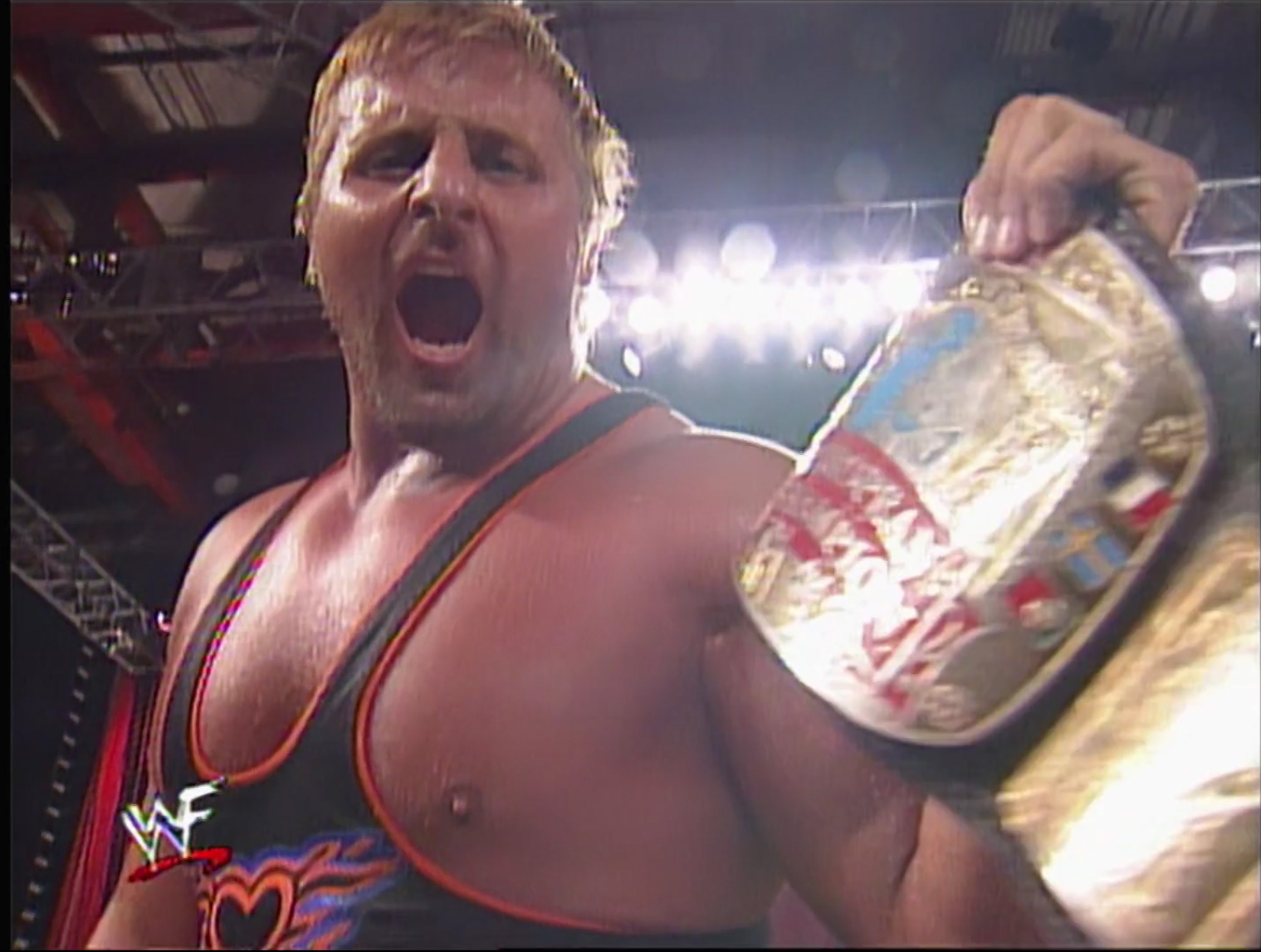 From Fort Lauderdale, FL, boxing promoter Don King is selling “Austin versus Tyson.” He then mentions the Nevada State Athletic Commission’s suspension of Tyson. For those unaware, during a boxing match in 1996 between Tyson and Evander Holyfield, Tyson bit off part of Holyfield’s ear in retaliation for Holyfield’s head-butting. His career was never the same. Nonetheless, Tyson will have a role on March 29 “without violating the rules” according to King.

Back in the arena, Austin comes to the ring, and he’s “pissed off.” He cuts a promo on Tyson and challenges him to show up at the next PPV.

Conclusion: While Nitro was selling an actual match between its two main-eventers, RAW was trying to bait its viewers into buying a PPV just for the sake of a possible Tyson-Austin encounter. While there were a few matches on this show, I’d classify this episode as a “clip show.” Despite all the hype, the WWF didn’t have a proper follow-up for the Austin-Tyson fiasco last week.

Could it possibly overcome Nitro in the ratings?

Nitro wins by more than a full ratings point as RAW mailed it in this week. I’m happy about the Owen title victory but expected more out of RAW than what was there. To be fair, Nitro needs to up the ante on its end too.