Live from Fort Wayne, IN

How will Dillon deal with Nash and the powerbomb that incapacitated Giant? And how will Savage interact with the rest of the nWo? There’s a wrestler returning to WCW? Who is it and who will he face? Let’s find out! 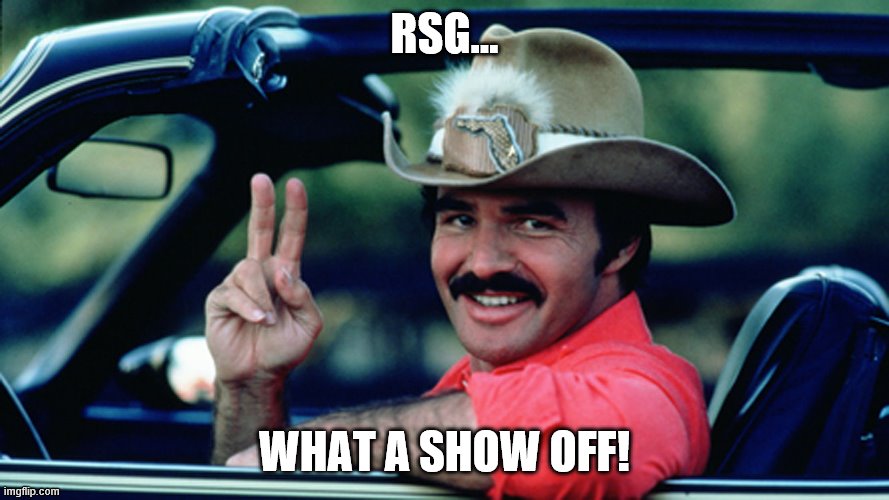 From Chattanooga, TN, “Mean” Gene Okerlund and the Nitro Girls are hanging out at the Lambda Chi Alpha Fraternity house. Okerlund enters the house but fails at picking up a co-ed. D’oh!

At the entrance, “Iron” Mike Tenay reveals footage of the botched powerbomb by Nash at the PPV. Chairman of the Executive Committee J.J. Dillon joins Tenay and declares that the powerbomb is BARRED. Any wrestler using it will be disqualified and fined. Passionately, he warns Nash that he will be ejected and possibly prosecuted criminally. 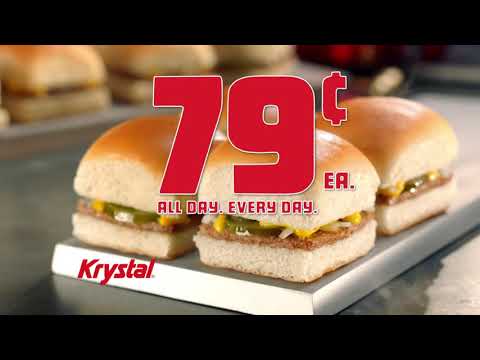 At the entrance, Tenay interviews Mongo who dismisses “all those guys up north.” Subtle, Steve. Suddenly Davey Boy Smith joins the interview to challenge Mongo. The challenge is accepted with plenty of bravado.

Summary: The Scott storyline continues while Rick and Bagwell had a decent match going. Oh well.

After the match, Scott tosses Vincent over the top rope to the floor and Jay down to the mat. That’ll cost ‘im! He then leaves yelling that he hates referees. Good to know, but he didn’t mention Mondays.

Nash and Bischoff stand at the entrance, and Nash has a beverage. While Bischoff believes Nash has been “singled out,” Nash offers his unique version of last night. He then equates Giant to “Old Yeller” and states “I stuck him on his skull!” To finish the interview, he asks to be called “Big Sexy, the Giant Killer.”

Summary: Is this how Neidhart’s supposed to debut his wrestling skills in WCW? As a lucky power guy? I fear for his resume in WCW. Bloom carried the match while the Ft. Wayne faithful sought popcorn.

Following a commercial break, Tenay interviews Ray Traylor who calls out Nash for a match tonight. I fear for Traylor’s “skull.”

Summary: There must have been a long line for refreshments ‘cuz the Ft. Wayne faithful wasn’t buying this one either.

Prior to the next match, Hall performs his survey. As per usual, the Ft. Wayne faithful favor WCW yet still chant “nWo.” He then announces Dusty Rhodes as the newest member and rallies behind Spicolli. Where is Dusty?

Afterward, Savage piledrives Guerrera, exits the ring, and grabs the microphone. He then calls out Luger while Elizabeth comes to the ring. Meanwhile, Spicolli provides Guerrera with a death valley driver. Savage angrily requests his withdrawal from the nWo and CREAMS Spicolli.

Meanwhile, the nWo saunters to the ring while Savage raves about Luger. As Savage informs “Hollywood” Hogan that he makes him sick, Hogan dresses him down. Savage rebuts that his match with Luger wasn’t finished when the nWo came to ringside. Also, he describes their efforts last night as “uncoordinated.” Lastly, he makes fun of Hogan for not being World champion.

Menacingly, Hogan promises to regain the World title at the PPV and tries to intimidate Savage. Instead, Savage exits the ring to grab a chair as the egomaniacs go their separate ways.

Back in Chattanooga, the Lambda Chi Alpha brothers perform the limbo with help from the Nitro Girls. Okerlund emcees a “pin the tail on the Nitro Girl poster” with Daniel Hunt, and Kimberly judges a Sting look-a-like with a “2.”

Summary: Mortis used a lot of offense, but Raven survived and won.

After the match, Mortis helps Wrath to his feet but suffers a Death Penalty for his troubles. Vandenberg reads him the riot act, but Wrath chases him away. I smell a breakup.

In the ring, Tenay interviews Bret who gives Flair his accolades. In addition, he wants to be World champion no matter who wins the title at the PPV.

Back in Chattanooga, Okerlund takes a survey and WCW wins by a landslide. The Nitro Girls finally dance while Okerlund shills Spring Breakout ’98 in Panama City Beach, FL.

Summary: Seriously, Booker T needs interview time on either Nitro, Thunder, or both because WCW is cultivating him based solely on his wrestling skill. His interviews would enhance the live crowd’s involvement with him.

After the match, the Flock storms the ring to decimate Booker T. Nevertheless, Rick Martel hits the ring to clear it. With the odds against him, Saturn chooses to save his own skin.

At the entrance, Tenay interviews the NEW Cruiserweight champion—Chris Jericho. Still wearing a Mysterio t-shirt, Jericho feigns crying and concern for him.

Summary: Showcase match for Smith but a terrible return to WCW after five years.

Summary: Just an angle so that Nash can break the new no-powerbomb rule.

After the match, Nash laughs while officials and DiBiase check on Traylor. WCW Security Director Doug Dillinger arrives to handcuff Nash, and Nash offers up an “Attica” while being taken into “custody.” 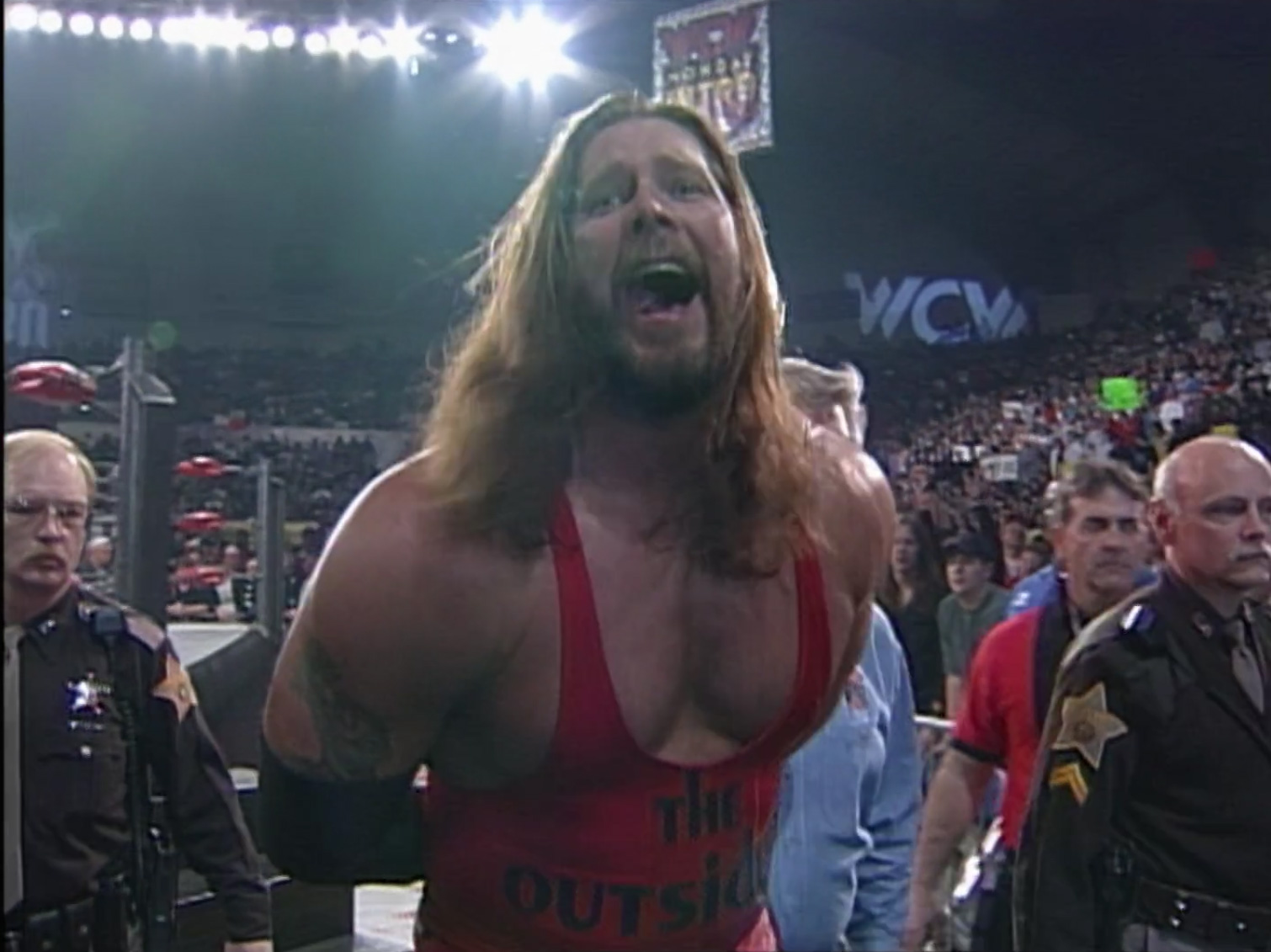 Nitro is sponsored by Twix.

Prior to the main event, Hall grabs the microphone and runs down Zbyszko. Not to be besmirched, Zbyszko leaves the broadcast table, but WCW Security stops him and escorts him backstage.

Summary: Waste of time in order to get to the main event storyline.

After the match, Savage WALLOPS Luger with a chair before referee Randy Anderson swipes it away and heads for safer ground. Savage then tosses Hall down to the floor, slams Luger, and mounts the top turnbuckle. Next, he hits a big elbow.

When Savage attempts a second big elbow, Sting repels from the ceiling knocking Savage down from the top turnbuckle. How convenient! Sting then enters the ring and unleashes a pair of Stinger splashes to Savage. While Hogan joins Hall at ringside, they cavalierly watch Sting wrap Savage in a Scorpion death lock. Hall then restrains Hogan while Sting stands proudly in the ring. 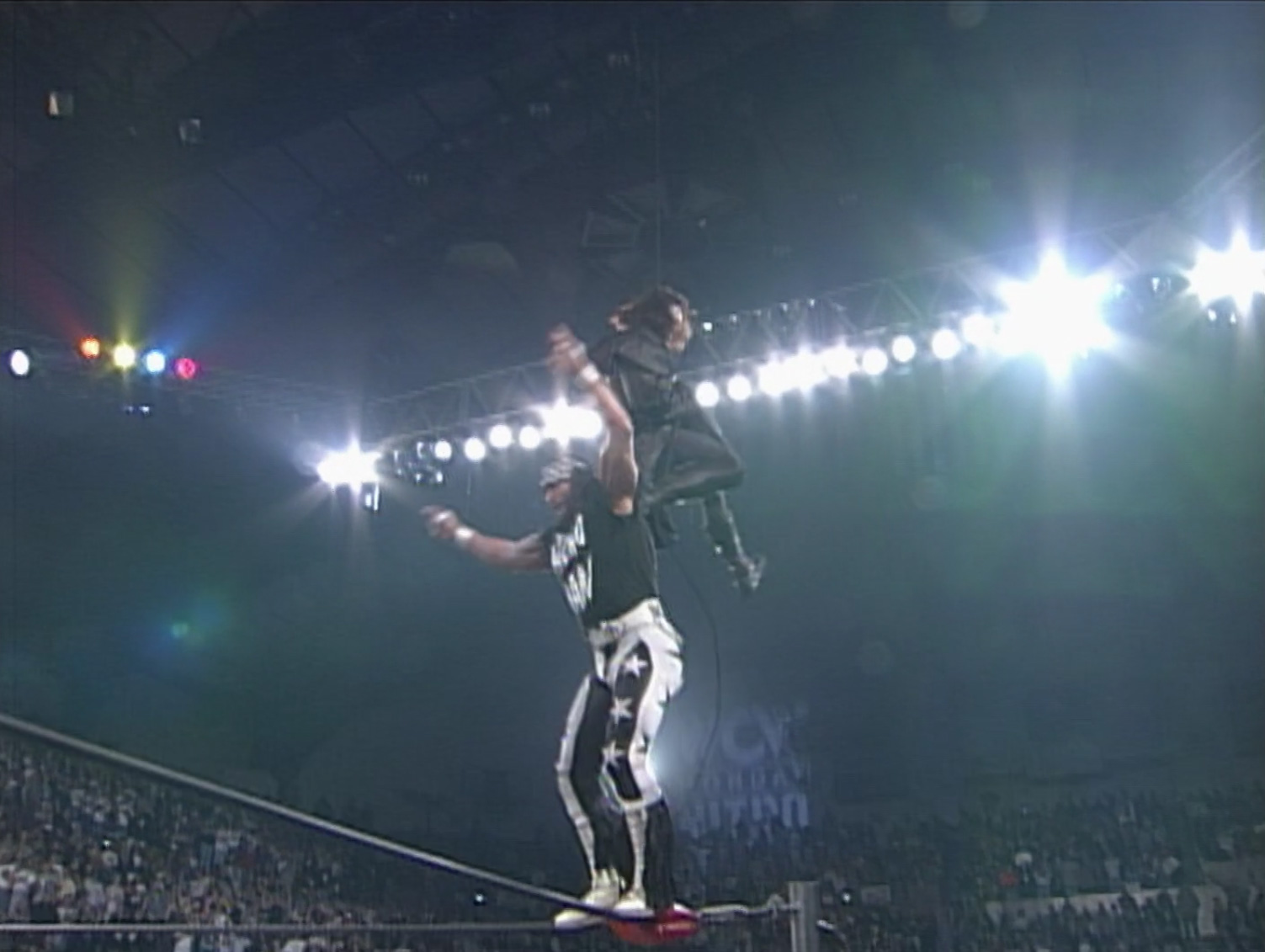 Conclusion: WCW makes it perfectly clear that Hogan-Sting III will be happening at the PPV. In addition, Savage is none-too-thrilled with any of them. Nash becomes the quintessential antagonist by purposely breaking the new no-powerbomb rule.

Now let me reflect…if you’ve not read my RAW is WAR reflection, please do so now…

OK…now that you’ve seen what amounted to a clip show by the WWF, WCW knew what was in the can and didn’t do much beyond what they needed to do to advance a few storylines. Let’s hope that Thunder is better than this show. What’s on RAW is WAR?