What will happen when Tyson invades RAW is WAR? Will Undertaker reemerge after last night’s fiery fiasco? How will DX behave this week? Let’s find out!

To begin the program, Undertaker’s music hits, but Paul Bearer emerges. Upon entering the ring and grabbing the microphone, Bearer laughs about the ruse he pulled on the WWF fans and the Undertaker. While the Fresno faithful chants “you suck” at him, Bearer details the destruction of Undertaker from last night.

When Undertaker’s music starts again, the tattered casket gets wheeled to the ring. Although Bearer would have you believe that Undertaker was charred beyond recognition, JR reveals that Undertaker has “disappeared.” Nevertheless, Kane rises from the casket to join Bearer.

Promo for the replay of Royal Rumble ’98 airs. It will begin at 8pm tomorrow night. Reorder NOW!

From the locker room, HHH cuts a promo on Owen. Afterward, Shawn Michaels feigns emotion about the fall of the Undertaker, yet DX will begin its hunt for Undertaker TONIGHT.

Match 1 (six-man): The Nation of Domination versus the Disciples of Apocalypse

Summary: Shitty finish aside, this was a well-oiled six-man match that followed the formula well.

After the match, the Rock and Mark Henry storm the ring, and the DoA are outnumbered 5-3. Suddenly, Ken Shamrock and Ahmed Johnson join the fray to even the sides. With their help, the DoA clears the ring.

Vic Venom shills both the WWF Magazine and RAW Magazine. For those in the know, Venom is otherwise known as Vince Russo—a member of the booking committee.

Backstage, a hearse pulls into the arena, yet no one has emerged from it.

Summary: Brandi may be an up-and-comer, but all the Fresno faithful wanted was more and more Sable.

Backstage, DX investigates the hearse and discovers DX groupies inside. Much to their delight, HHH and Michaels join them in the back of the hearse while Chyna scowls.

SONY PLAYSTATION SLAM OF THE WEEK: ICYMI, Luna took a ride on Vader’s back during a Vader bomb of Goldust last night.

Outside the arena, Shane McMahon and “Iron” Mike Tyson exit a limousine.

Summary: Inauspicious return by the Quebecers. I wonder if they get another invite.

After the match, Cactus offers the Quebecers a double noggin knocker followed by a double Cactus clothesline. Charlie then hits a Vader bomb onto the Quebecers. When Cactus celebrates in the ring, Rougeau puts a knee into his back sending him outside the ring again. Next, Rougeau intentionally backdrops Pierre over the top rope atop Cactus; however, Cactus grabs his trusty barbed-wire baseball bat to chase them away. Wouldn’t you run away from a toothless Christmas-loving hardcore freak?

Backstage, DX encounters los luchadoritos. When Michaels wants to question Max Mini, Chyna lifts him up to be eye-to-eye with Michaels. HA!

Summary: This was definitely booked with a Southern old-school flair, but Fresno in 1998 was neither Southern nor old-school.

After the match, Jarrett shoves Bradshaw so he could strut. Bradshaw takes no prisoners and nails both Jarrett and the Rock’n’Roll Express. While Jarrett and the Rock’n’Roll Express restrain Bradshaw, Cornette CLOBBERS him with his tennis racquet. Windham re-enters the ring and waves them off. All of a sudden, he unravels a lariat to Bradshaw. WE HAVE A HEEL TURN! He then puts the boots to Bradshaw and joins the NWA group smiling all the way back to Texas.

Cole and Kelly run down the WWF tour:

Undertaker’s music hits again, and he descends from the ceiling. When the lights illuminate, Michaels unveils himself from Undertaker’s attire. What a ruse! HHH and Chyna join him in the ring with a barbecue grill. In true degenerate fashion, HHH wears a unique apron. 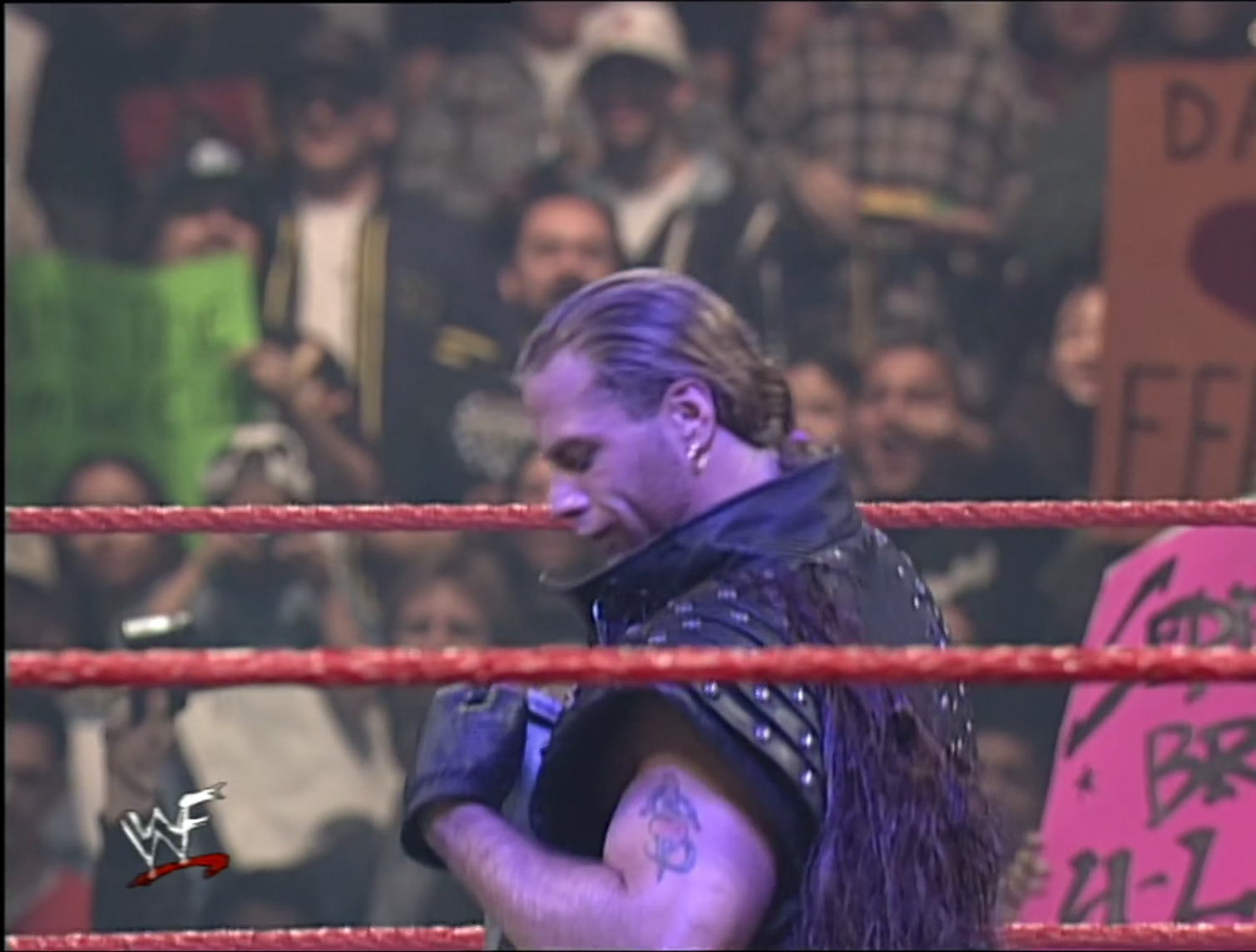 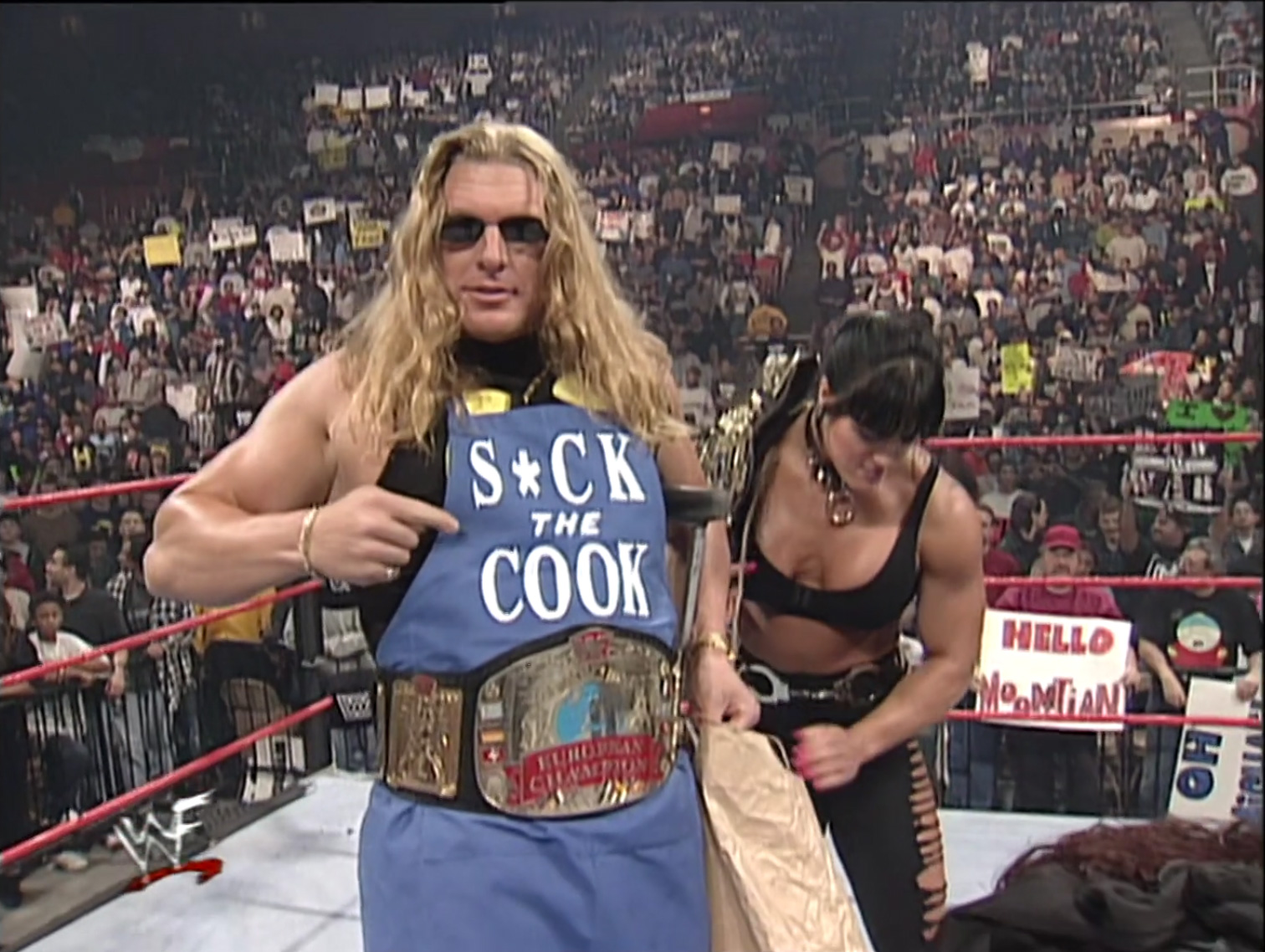 HHH starts off with a “jumbo weenies” reference, yet Chyna grabs a HUGE salami. I guess we know where the seeds of her second career were sown. Regardless, Michaels relates a barbecue reference to Undertaker. HHH then refers to Owen as the “Mr. Hanky of the WWF” and cuts a promo on him. In fact, he offers a shot at the European title next week. 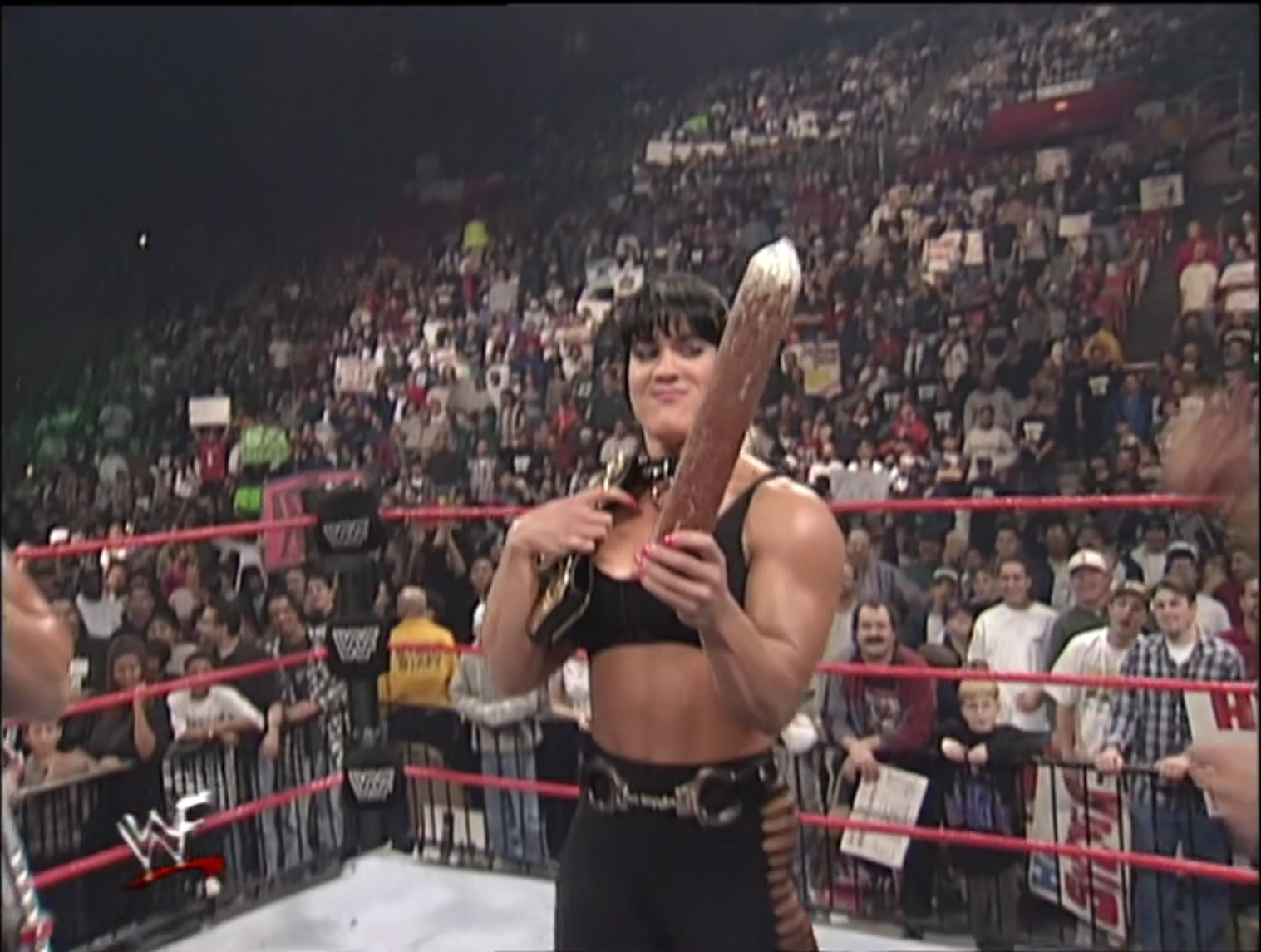 While Michaels shoves the big sausage down his pants, HHH takes a subtle potshot at Flair. Michaels then sings his own praises in a delusional manner. When he brings up Austin, Michaels informs him that he “lays down for absolutely nobody.” DX then tosses marshmallows into the Fresno faithful.

JR shills No Way Out LIVE on PPV on 2/15 from Houston, TX sponsored by Western Union.

Backstage, while Tyson chit-chats with the Road Warriors, Sunny hits on him.

Summary: The Fresno faithful only had eyes for Owen in this match. The rest was F-I-L-L-E-R.

Summary: If there wasn’t a “Rocky sucks” chant going around, this match would get zilch.

After the match, Shamrock ensures that Johnson doesn’t get double-teamed in his desire to harm Rock.

WWF REWIND: Highlights from the Undertaker-Michaels match from last night are shown including Undertaker’s crotch grab.

Meanwhile, DX attempts to recruit Tyson. Might be nothing…

Match 7 for the WWF tag titles: The New Age Outlaws (champions) versus the Godwinns

After the match, Henry clobbers Road Dog with his slop bucket, rips open the stuffed pig, and a brick falls out. Heinous! He then bitches at JR and Lawler about it.

JR then shills the WWF Superstar Line teasing a possible WWF-Savage deal. I wonder if WCW executives will cut Savage a bigger check with that story simmering on the stove.

And now what you’ve been waiting for…

Vince McMahon is in the ring and introduces “Iron” Mike Tyson. Along with his entourage, Tyson enters the ring to a flurry of flashbulbs. During his interview, Tyson rattles off Bruno Sammartino as one of his favorites. I guess McMahon didn’t prep him beforehand. Nevertheless, Vince announces that Tyson will be the special guest referee for the main event at WrestleMania XIV. 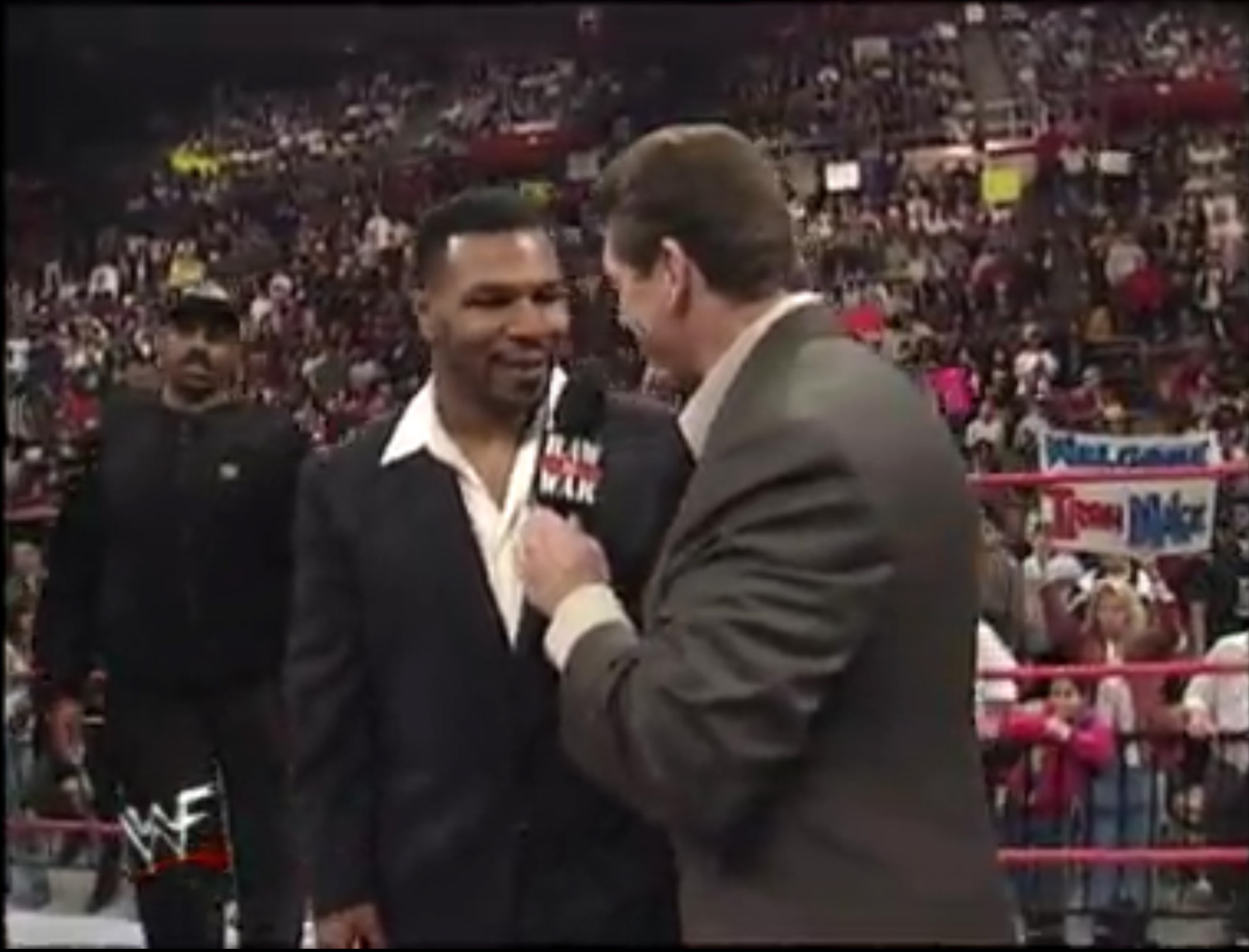 But before Vince can complete his announcement, the glass crashes, and Stone Cold Steve Austin emerges. WWF officials storm the ring to prevent chaos. As Vince questions his appearance, Austin complains about Tyson. While Austin respects Tyson’s boxing resume, he warns Tyson about being in his neighborhood. In fact, he “wants a piece of Mike Tyson’s ass.” That’s not homoerotic in the slightest. 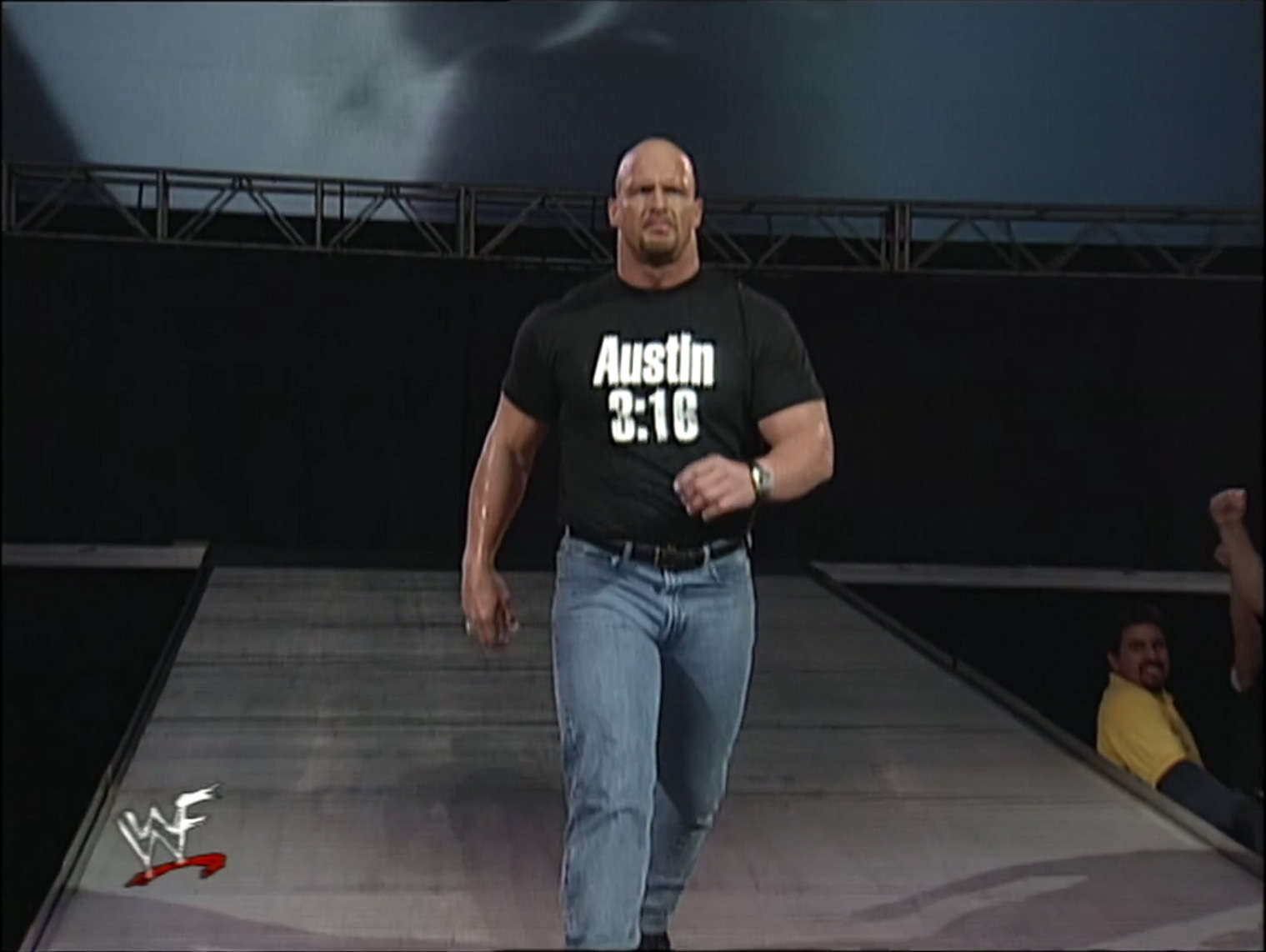 Regardless, Austin warns Vince not to say anything under the threat of “knock(ing) (his) damn lights out.” Austin puts himself over and informs Tyson that he can beat him “any day of the week (and) twice on Sunday.” He then summons a “hell yeah” from the Fresno faithful when he proposes the idea of beating Tyson. 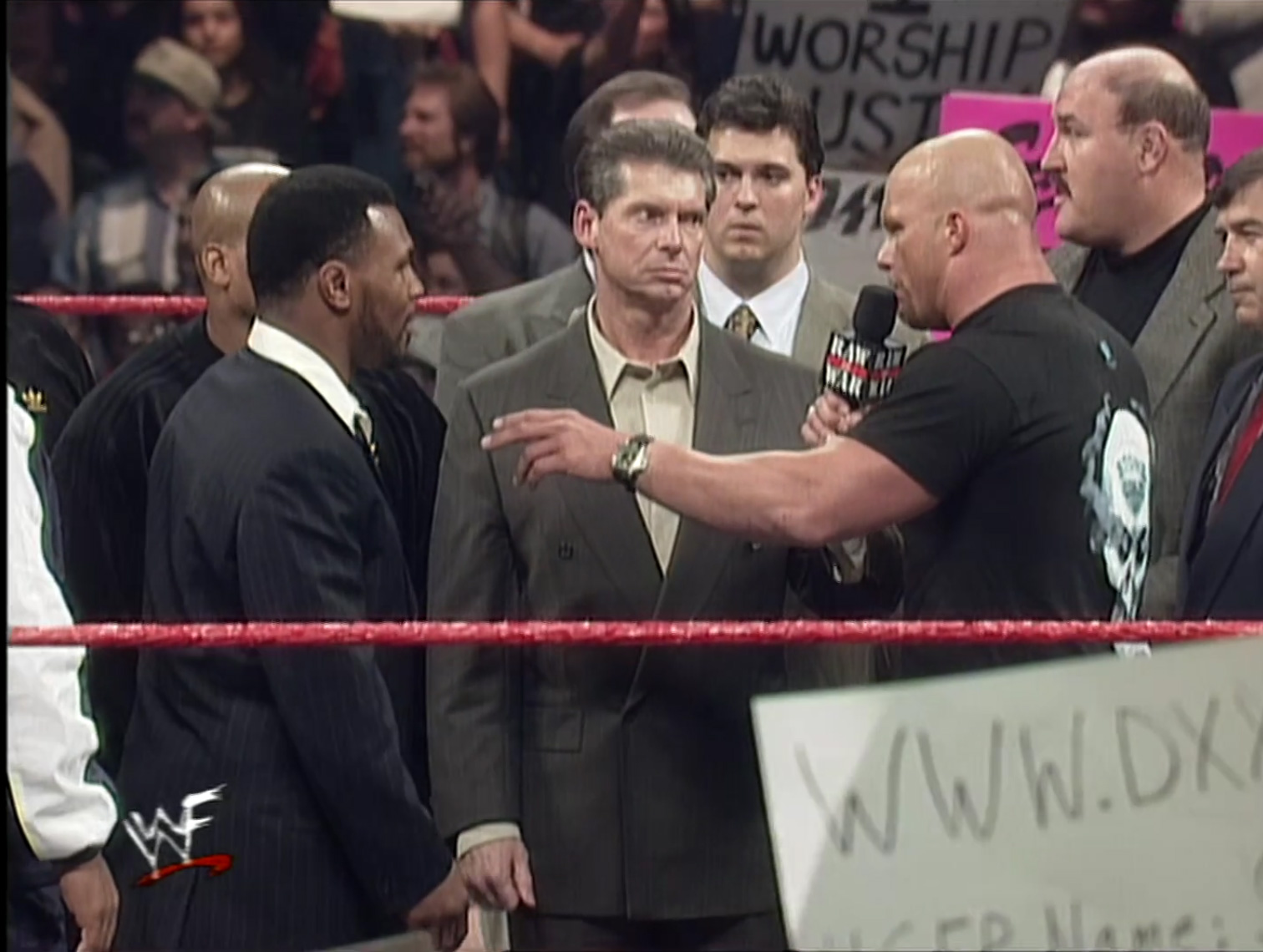 When Austin offers Tyson a two-finger salute, Tyson shoves him. Both Tyson’s entourage and WWF officials attempt to separate them, and WWF officials successfully restrain Austin. The Fresno faithful showers their hero with “Au-stin” chants. As Austin gets dragged from the ring, Vince scolds him by saying “You’ve ruined it!” Vince is genuinely pissed while Austin provides him with a single-finger salute. Will a Tyson-Austin match occur at WrestleMania XIV instead? 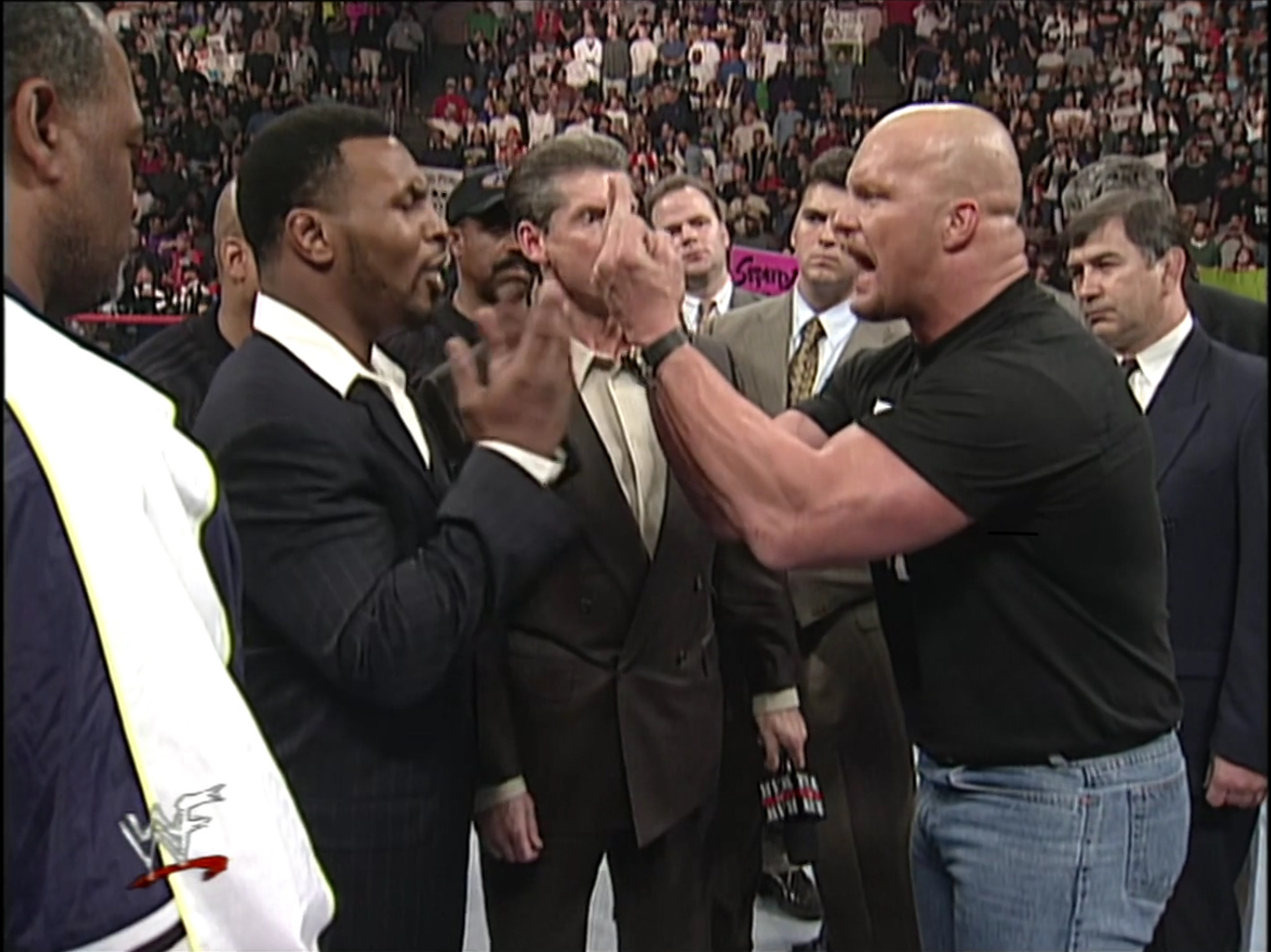 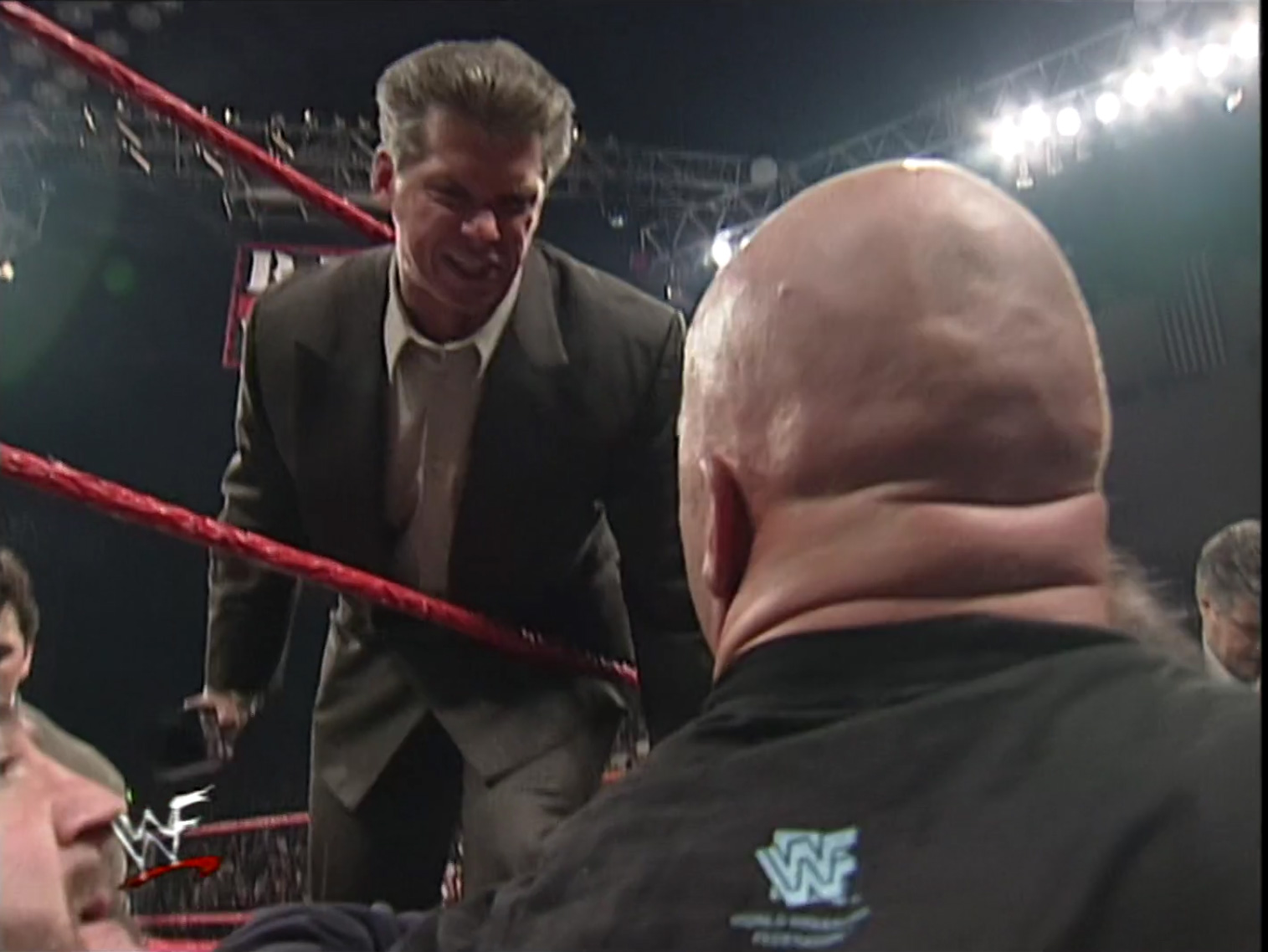 HOT TAKE: This was a genuine ESPN Sportscenter moment during a time when the WWF got ZERO attention from the sports world. Also, this was a truly historical moment as Tyson provided the WWF with mainstream attention and helped to make WrestleMania XIV a can’t-miss spectacle.

Promo airs for the encore of Royal Rumble ’98. It will air tomorrow night at 8pm ET. Order NOW!

A replay of the Tyson-Austin confrontation airs, and Tyson yells at Vince about Austin to close the show.

Conclusion: At this time during the Monday Night War, there were very few can’t-miss episodes. This was certainly one of them. If you’ve never seen the Austin-Tyson encounter, pull up a chair and watch this show. If you’ve not seen it in a while, you owe it to yourself to watch it again. Could it finally overcome Nitro in the ratings?

Who won? Nope, the Tyson teasing during the entire show kept some wrestling viewers glued, but Nitro put Hogan in the main event to crush the WWF’s dreams on Martin Luther King Day. Tyson-Austin could provide a big jolt in the coming weeks, and Vince’s involvement adds some spice. Perhaps next week?