What does DX have in store for Undertaker this week? How is Owen involved? What is next on Goldust’s agenda? Can Shamrock contnue to steamroll the NoD? Or do they have something up their sleeves? What’s the latest on the Mike Tyson developments? And what happens during the Rumble match drawing?

From within a limousine, DX is excited about being at Penn State because of “college chicks.” They then cut a promo on Undertaker, and Shawn Michaels sticks his ass out of the sunroof. Well, he truly was an ass back then.

While the NAO makes its entrance, they are wearing Florida Gators t-shirts and caps. Why? Because on 1/1, Penn State lost to Florida 21-6 in the Citrus Bowl. Evil!

Summary: The sole star for the match was the reaction by the State College faithful to the heat given by the NAO. The rest was C-R-A-P.

During the commercial break, Stone Cold Steve Austin pulls up in his pickup truck and decimates the Godwinns with Stunners.

Afterward, Cole interviews Austin in the ring. Austin claims he won last year’s Rumble “fair and square.” HA! Regardless, he draws a bullseye on his chest and promises to win the Rumble.

Missing from the WWE Network feed is footage from MSG where Austin allegedly cut a promo for MTV’s “Celebrity Deathmatch.” Methinks he makes more than just a single appearance. 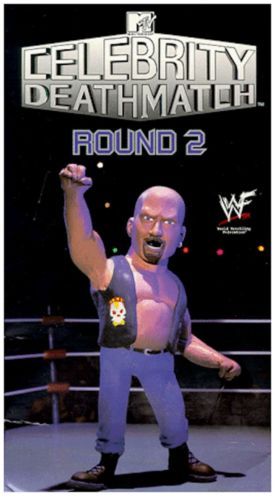 RAW is sponsored by Snickers. It’s funny. WCW’s PPV is also sponsored by them. It seems that sponsors know where the action (and ratings) is.

After the match, Jackal brings Kurrgan to the broadcast table and hands him a Penn State football helmet. Menacingly, Kurrgan rips it apart.

With Chyna and Michaels trying to get the WWF truck out of their way, Owen Hart climbs through the sunroof to ambush HHH. After Chyna and Michaels climb in, the driver pulls the limousine away from the arena. I don’t like Owen’s odds.

Prior to the next match, Mero enters the ring and grabs the microphone. When he begins to speak, Mero’s microphone doesn’t work. When Sable’s music hits, TAFKA Goldust impersonates her. 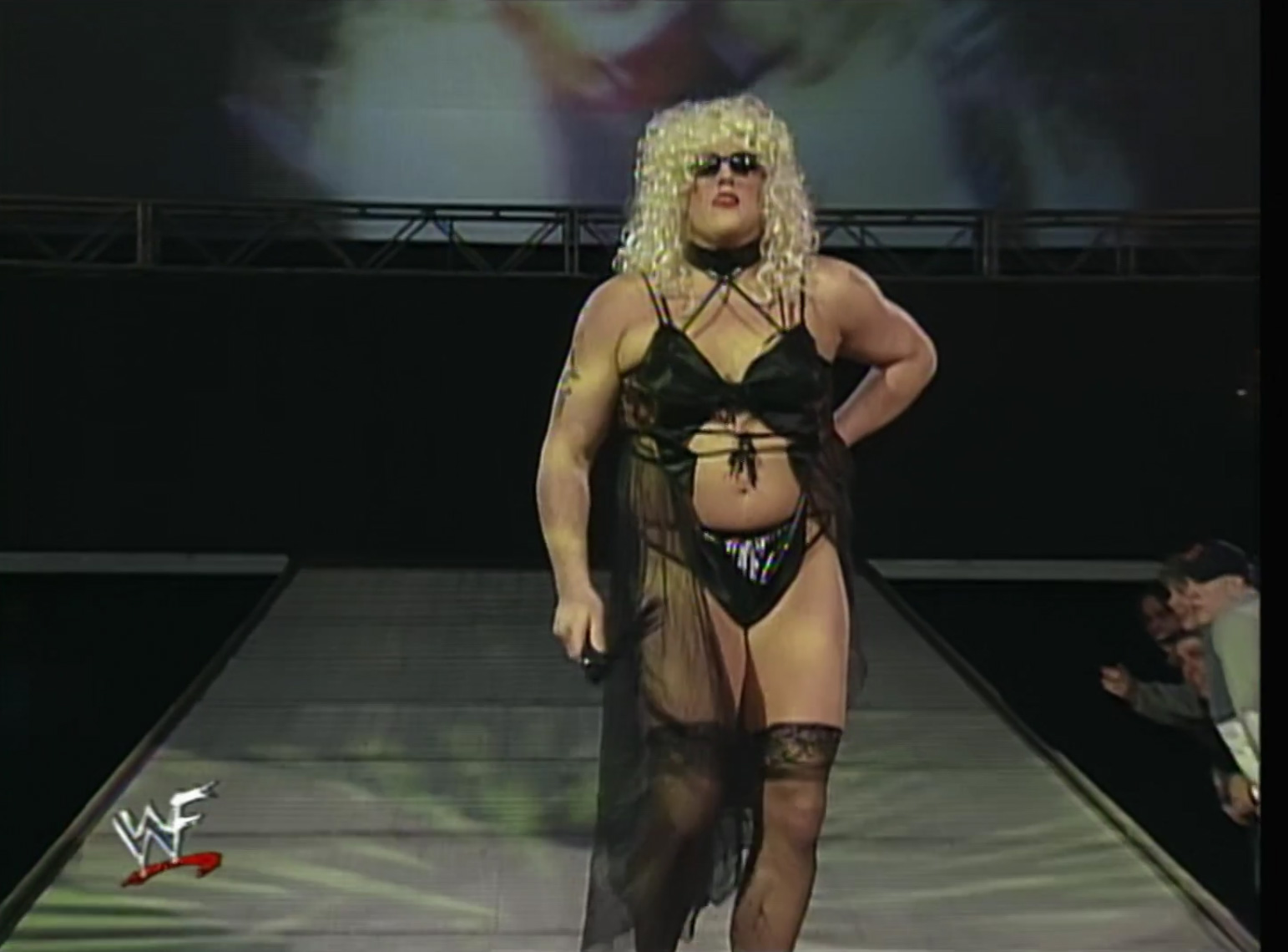 Summary: More storyline than match as the Goldust-Vader feud prepares for this Sunday.

Outside the arena, the limousine returns, and DX exits. Where’s Owen?

Back in the locker room, Austin has another victim—Vader.

We then revisit Shotgun Saturday Night from two weeks ago when the NoD pummeled Henry until Shamrock made the save.

Prior to the next match, the Rock grabs the microphone and insults the State College faithful.

Summary: All angle as the Henry heel turn evolves.

Afterward, Rock hits a Rock Bottom on Shamrock, and Henry counts the bogus pin. Rock then rips off Henry’s shirt to reveal an NoD shirt. They get to the top of the ramp, and Faarooq’s none-too-pleased with Rock’s acquisition. 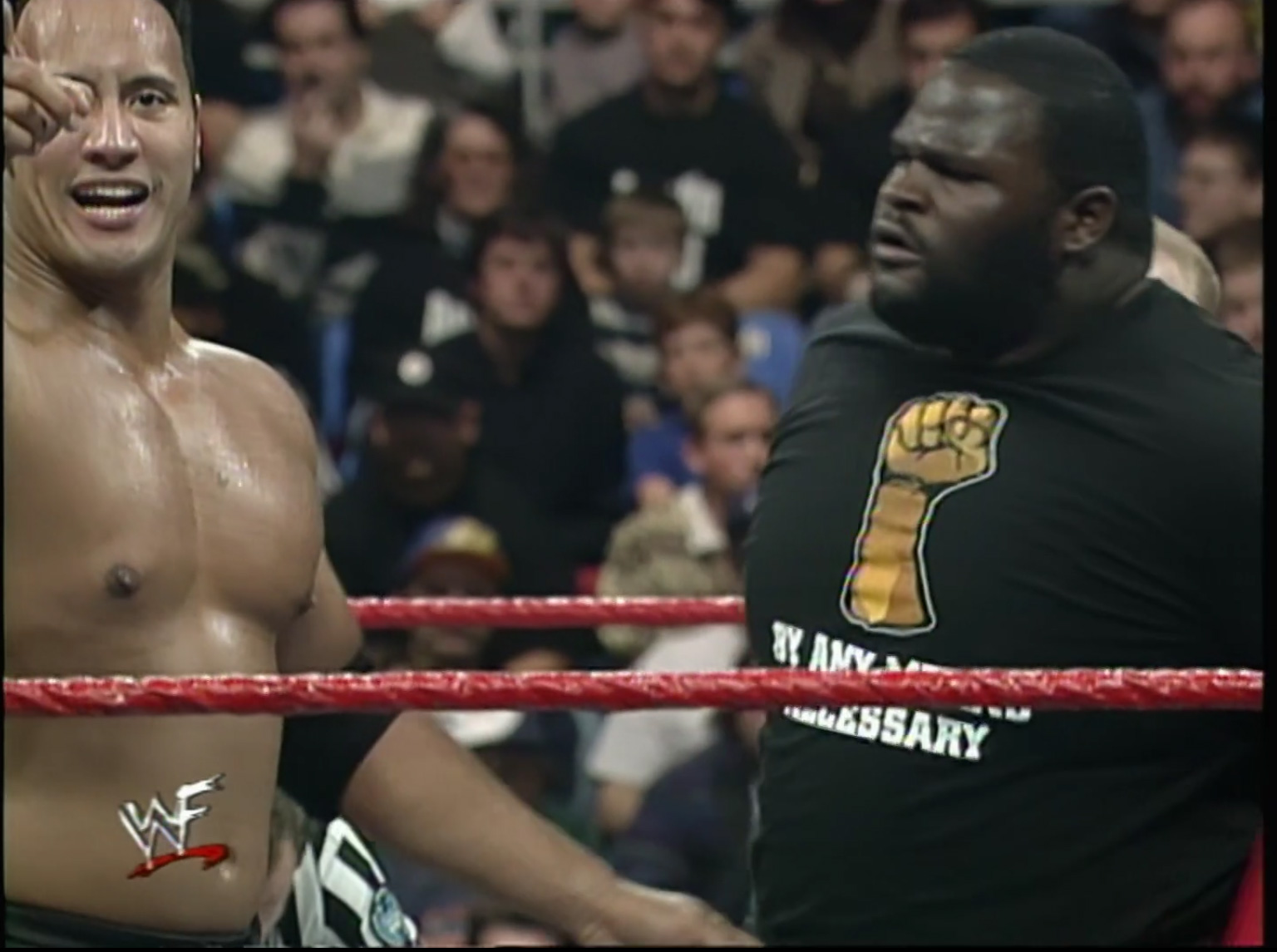 Back in the locker room, the NoD basks in their glow.

DX heads to the ring while HHH walks with a single crutch. While HHH claims that Owen’s been flushed, he finishes with some dick jokes. Michaels hypes Mike Tyson as HHH mimics him. After he cuts a promo on Tyson, Michaels mentions Kane. Abruptly, Owen appears on the Titantron the worse for wear. He then comes to the top of the ramp, threatens to break HHH’s other leg, and calls him a “gutless bastard.” Officials separate them to end the segment. 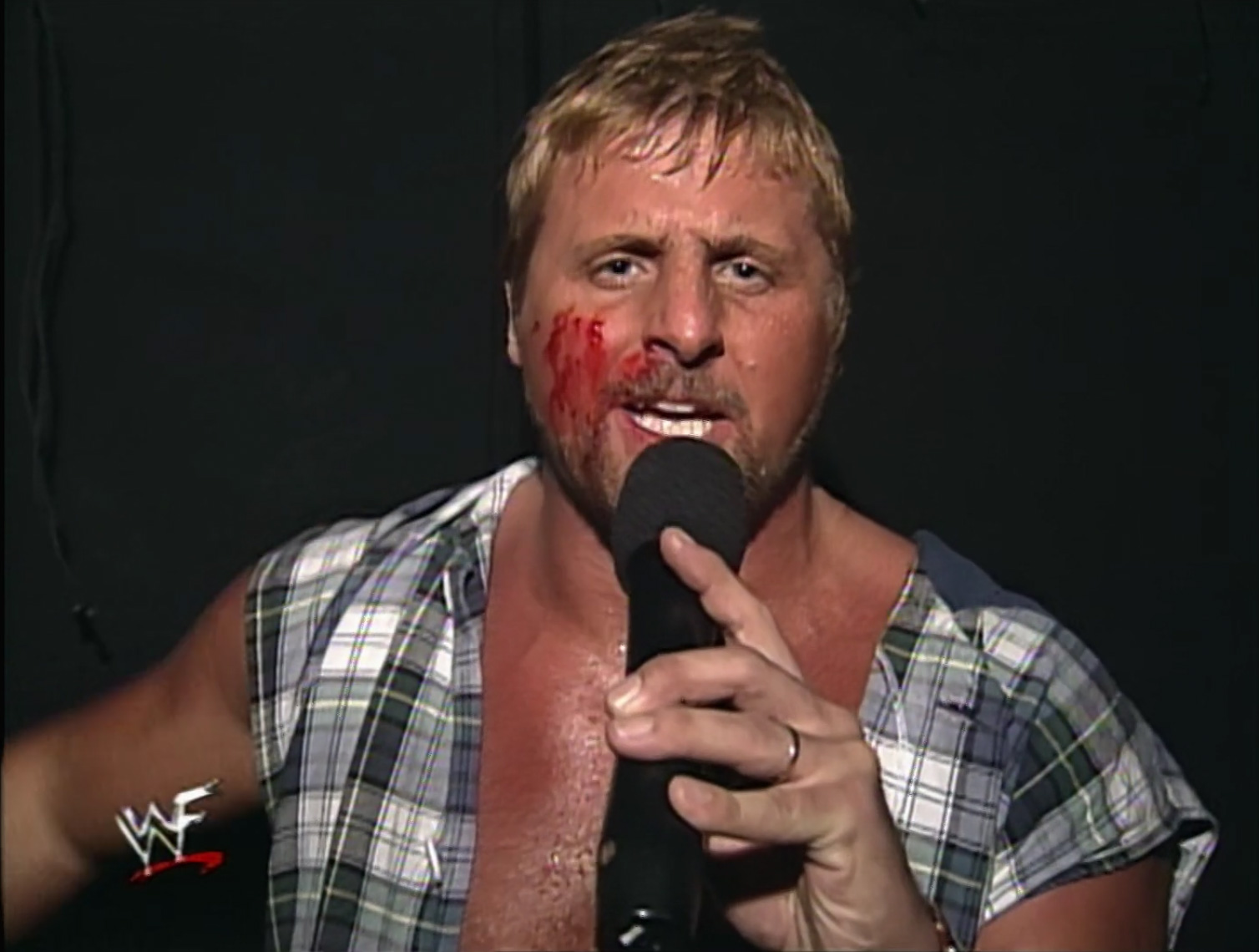 We then revisit last week’s episode when Jarrett became the NWA North American champion thanks to Cornette.

After the match, 8-Ball catches Cornette in the ring and hammers him. Morton then grabs the racquet and CREAMS 8-Ball with it to save Cornette. Skull comes to his partner’s aid but eats a double dropkick from the Rock’n’Roll Express. Chainz arrives to shoo them away.

Earlier today, Cactus Jack stands barefoot in Beaver Stadium, brings up Terry Funk, and cuts a promo on the NAO. 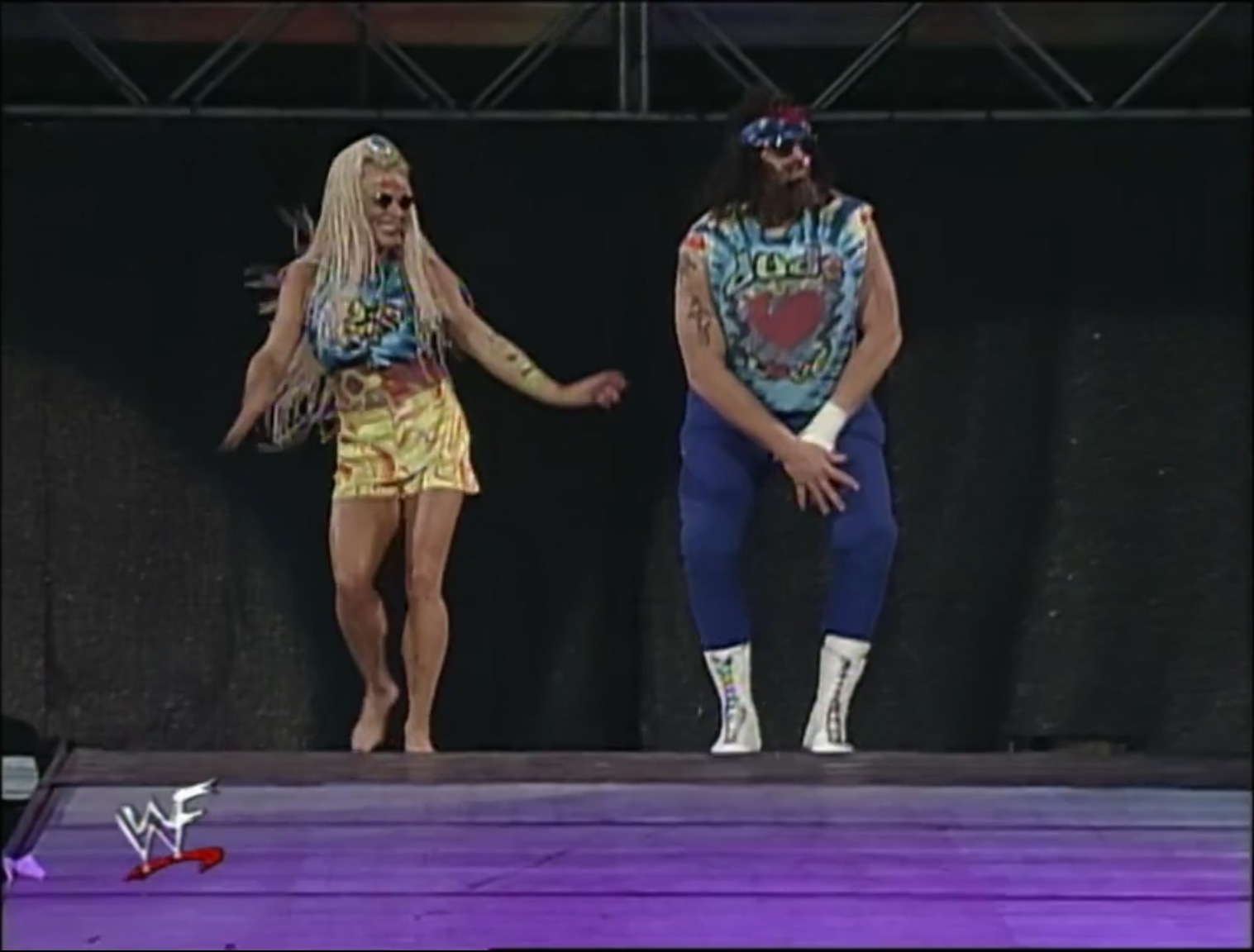 Backstage, Vince McMahon informs us that Tyson is an “invited guest” to Royal Rumble ‘98 this Sunday. While receiving boos, he promises that Tyson will appear on next week’s episode. 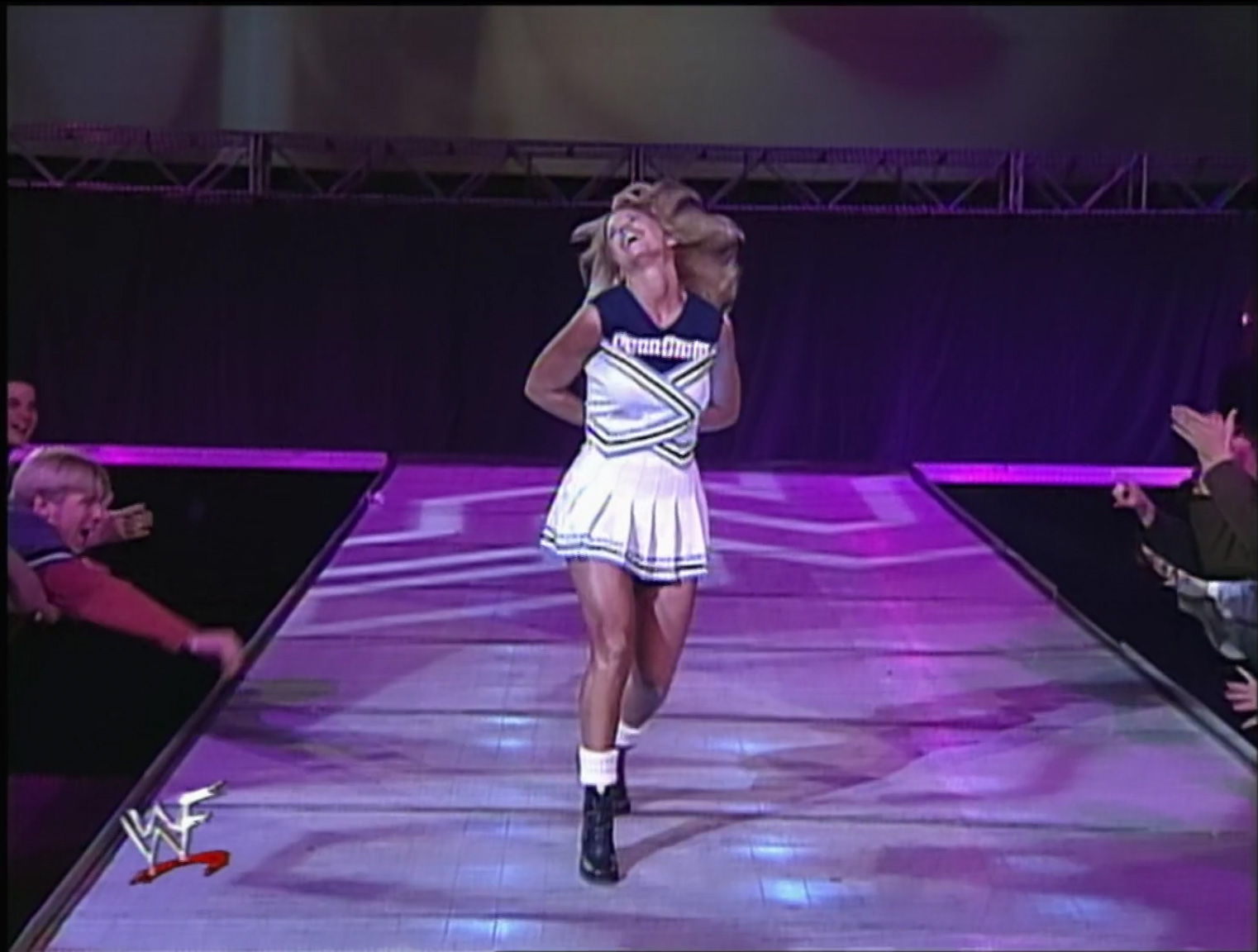 Summary: All high-flying and NOTHING else.

After the match, Los Boricuas outnumber and destroy Michinoku and Taylor. Immediately, Owen hits the ring with a crutch and BATTERS Los Boricuas away.

Again, we revisit Royal Rumble ‘95 when Bigelow shoved Taylor. The broadcast team believes something like this might happen next week.

DX returns to the ring, and Cole reluctantly interviews them. While Michaels welcomes the newest member of DX—Kane. In lieu of Kane’s music, Undertaker’s music plays. Undertaker comes to the ring to confront Michaels. When he throttles Michaels, Undertaker senses Chyna with the European belt approaching him. He then lifts her up WITH ONE ARM, but HHH whacks him with his crutch.

Since that didn’t faze Undertaker, he saunters after HHH. That allows Michaels to unleash Sweet Chin Music upon Undertaker. With the help of HHH’s crutch, Michaels assaults Undertaker. The State College faithful chants “we want Kane,” and the lights go out. Kane appears, comes to the ring, and pulls Michaels off Undertaker. Scared out of their skulls, DX scampers away. From the top of the ramp, Kane symbolically offers his hand, and Undertaker accepts. What a segment! 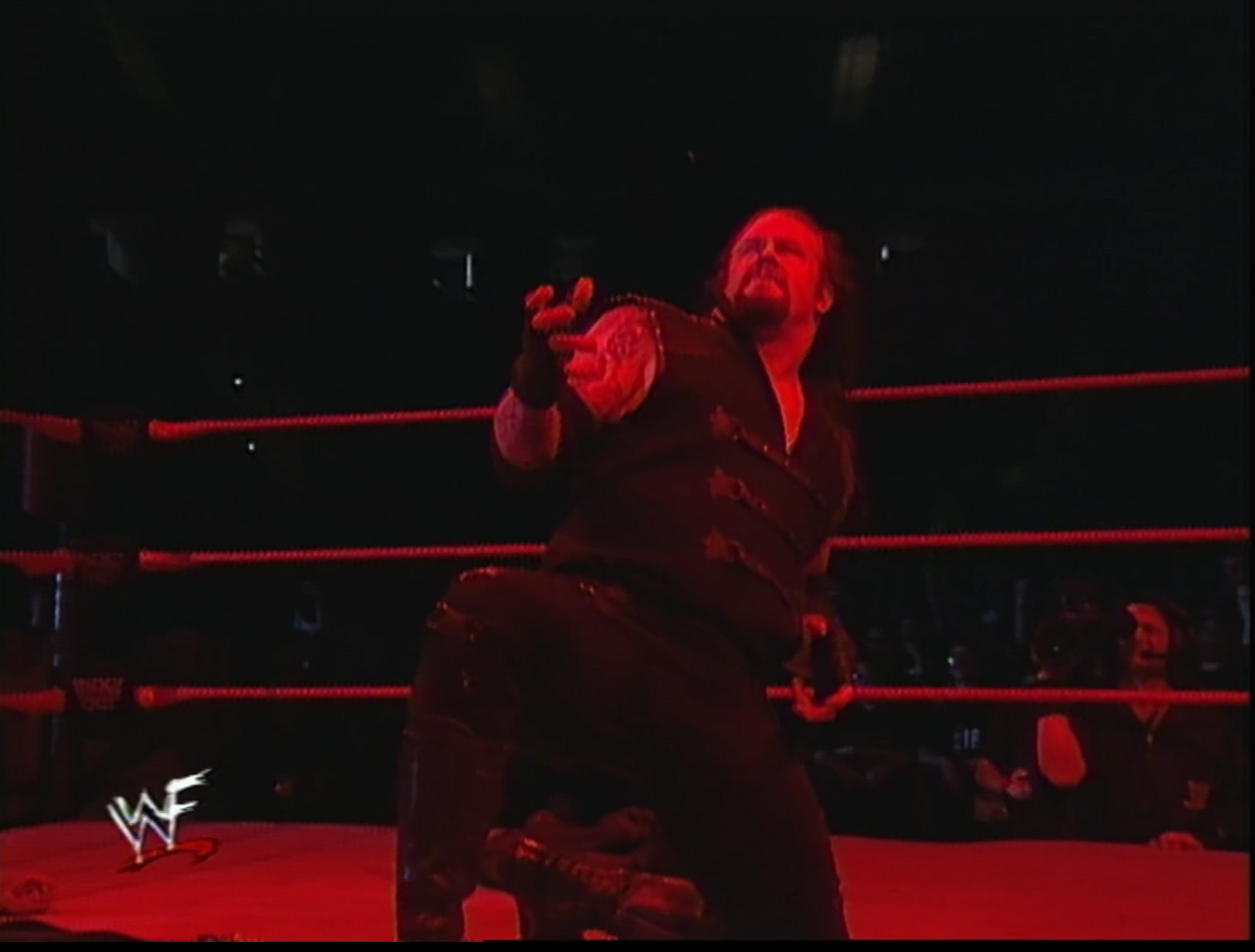 ROYAL RUMBLE DRAWING: A host of WWF superstars are in the ring with the tumbler. As Shamrock enters the ring, a brawl erupts. Believe it or not, the Honkytonk Man heads to the ring as brawl ends. Cactus Jack follows, and Austin arrives. Wait a minute! While the WWF superstars await his entrance from the ramp, Austin enters the ring through the State College faithful and hammers anyone he can get his mitts on.

Austin supplies Phineas with another Stunner and gets out of Dodge unscathed. To end the show, chaos reignites in the ring while the NoD and Los Boricuas attack Austin on the ramp.

Conclusion: Is Royal Rumble ‘98 this Sunday? Are you sure?

Absolutely huge sell-job by the WWF to buy the PPV with all feuds being announced or furthered on the show. Will it cause a shift in the ratings?

Who won? Nope, RAW is WAR lost by an entire rating point again. I said it last week, but perhaps the lack of having Mike Tyson on the show cost them the battle. Next week’s show should tell us something.