Will the Outsiders regain the World tag team titles, or will the Steiners find a way to retain? What’s happening with. Nash and Savage? Who’s the latest newcomer to WCW? And how will WCW guarantee Nash appears at the next PPV? Let’s find out!

Outside the arena, “Mean” Gene Okerlund interviews the nWo about the ‘family business” last week. Nash ends the interview with “Savage don’t want no part of me.” Where’s Savage?

Summary: Showcase match for Goldberg. Methinks this guy might be getting over.

Nitro Girls dance in silver and black among the Jacksonville faithful. Schiavone, ever the gentleman, introduces new Nitro Girl Whisper. She is better known today as Mrs. Shawn Michaels. 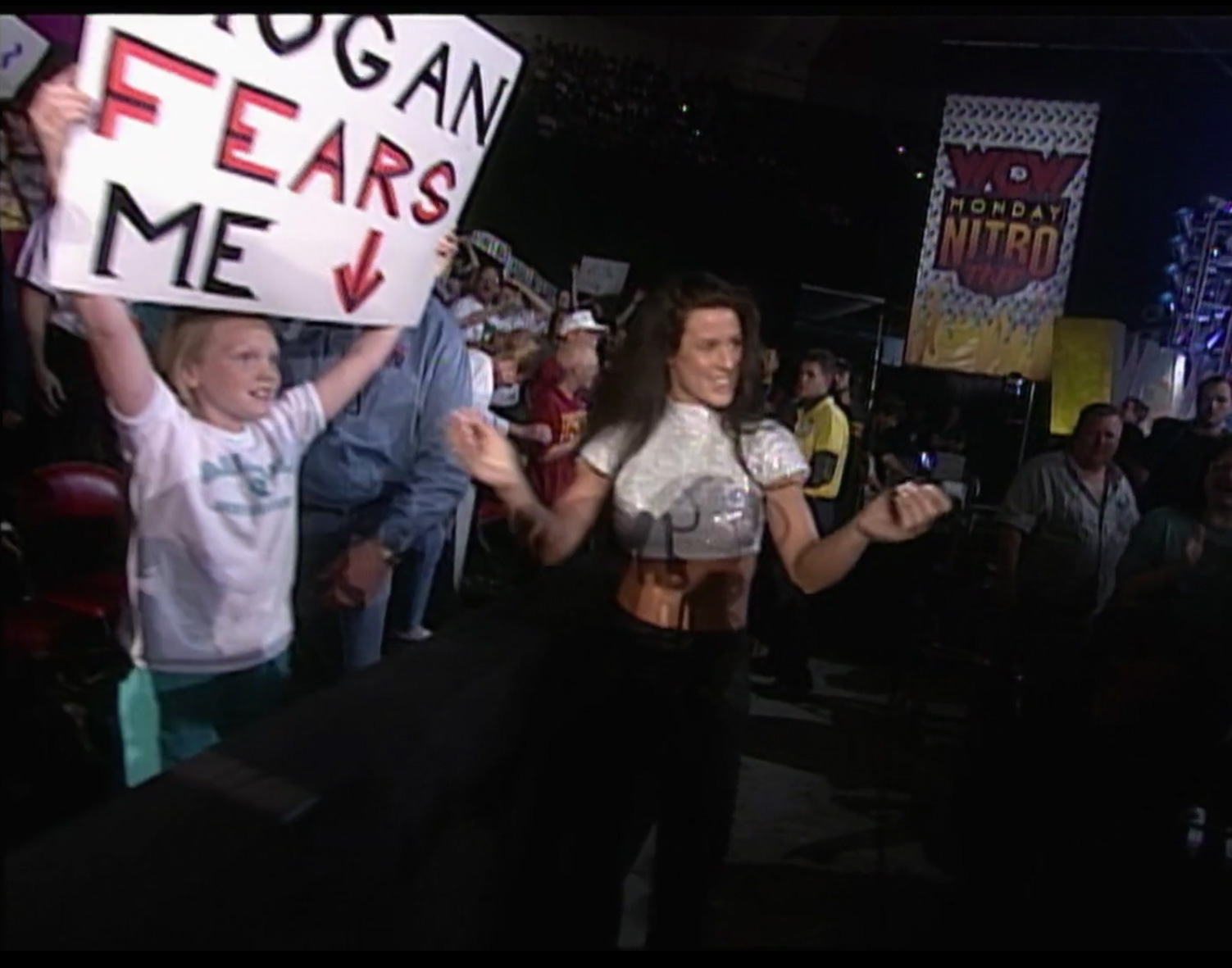 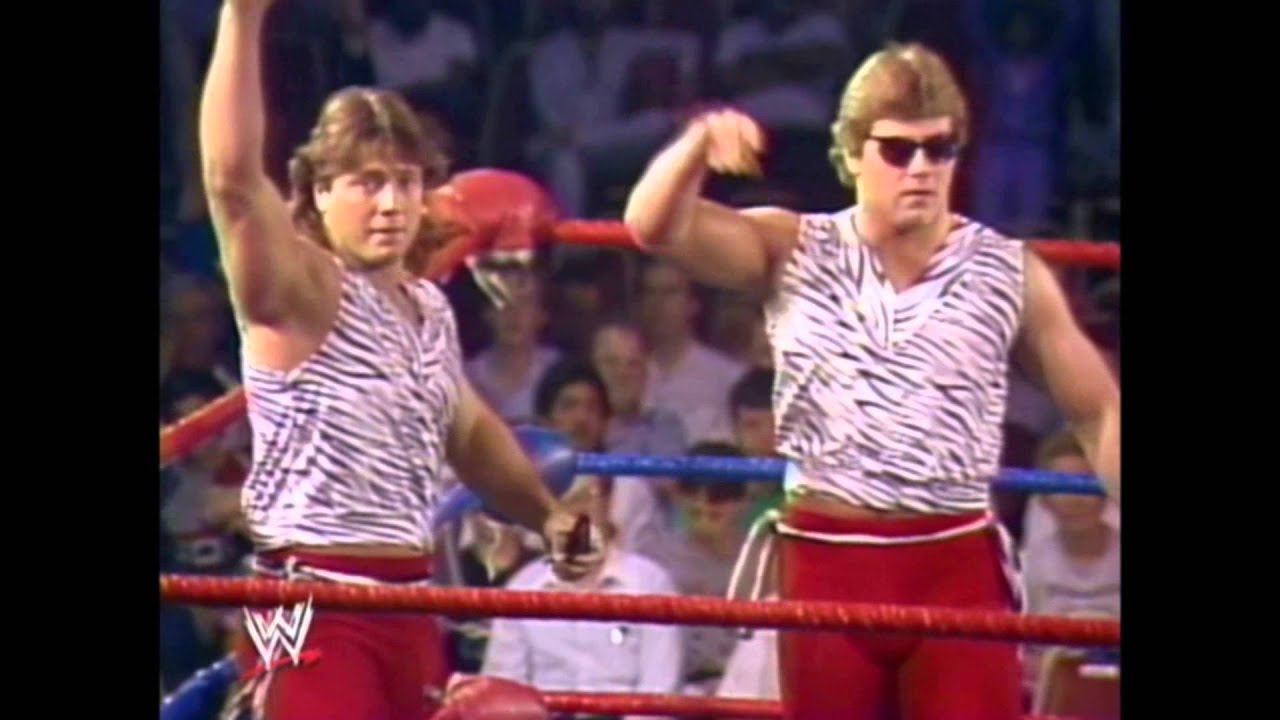 Summary: Showcase match for Jannetty as he tamed the black cat.

Following a commercial break, Okerlund, still out in the parking lot, interviews Savage who desperately wants to know what Nash said about him.

Summary: As you expect from these two, they provide a solid match with excellent wrestling. Since Benoit has the upcoming PPV match with Raven, he gets the victory.

Speaking of Raven, after the match, he storms the ring and attacks Benoit. He then PLANTS Benoit with a DDT and stands face-to-face with Malenko. That is until Saturn CLOBBERS Malenko from behind. How dastardly! Saturn then hooks a Rings of Saturn on Malenko while Zbyszko complains about Raven’s piercings. Methinks he’s old-fashioned.

At the entrance, Okerlund interviews Chairman of the WCW Executive Committee JJ Dillon. We then revisit Thunder and last week’s Nitro with the chair exchanges between Luger and Savage. Dillon, due to Savage’s striking executive Vice-President Eric Bischoff, fines him $5000. Like a bat out of hell, Savage sprints toward Dillon to confront him. Immediately, Bischoff pulls Savage away and offers to pay the fine. Savage was LIVID.

In the ring, Okerlund interviews US champion DDP who plugs a tag match on this week’s Thunder between he and Luger versus Savage and Nash. That ought to be interesting. After he takes a potshot at the Savage/Elizabeth relationship, DDP cuts a promo on Savage and Nash.

Summary: The Dusty finish was employed merely to include Rick Martel in the World TV title picture.

After the match, Martel asks Booker T for a title shot. Booker T replies that he has an “open contract” and offers it to him.

In the ring, Okerlund interviews Nick Lambros with Giant. Lambros explains that the nWo has failed to explain Nash’s absence at Starrcade ‘97 and requires Nash or the nWo to pay a $1.5 million performance bond for the upcoming PPV. Wow! Should the performance bond not be paid, Nash would be suspended for a year. Holy cow! Lastly, Lambros declares that Bischoff has been spending Time-Warner's money “like water” and is “cut off.” Blockbuster announcements!

Giant gets his turn and wants Nash to “show up.” I bet he regrets saying that. Suddenly, Bischoff, Nash, “Hollywood” Hogan, and Henry Holmes-a sports and entertainment lawyer—come to the ring. Holmes accepts the performance bond care of Hogan. But he has a catch! He requires that WCW and Giant match the $1.5 million to prevent Giant from touching or coming near Nash prior to the PPV. Patiently, Giant accepts the counteroffer. Nash then harasses Giant who stands firmly before leaving.

Promo airs for Savage-Luger at the PPV.

Summary: Showcase match for Luger who is tremendously over with the Jacksonville faithful.

After the match, Elizabeth comes to ringside for a booty call to plead for Luger’s help. Of course, it’s a ruse as Savage LEVELS Luger from behind. SNEAKY! Savage then makes Luger taste the steel railing. It must have tasted like the Randy at Wicked Barley.

He then holds Luger so that Elizabeth could slap Luger silly. When DDP arrives to aid Luger, Savage and Elizabeth scamper away. 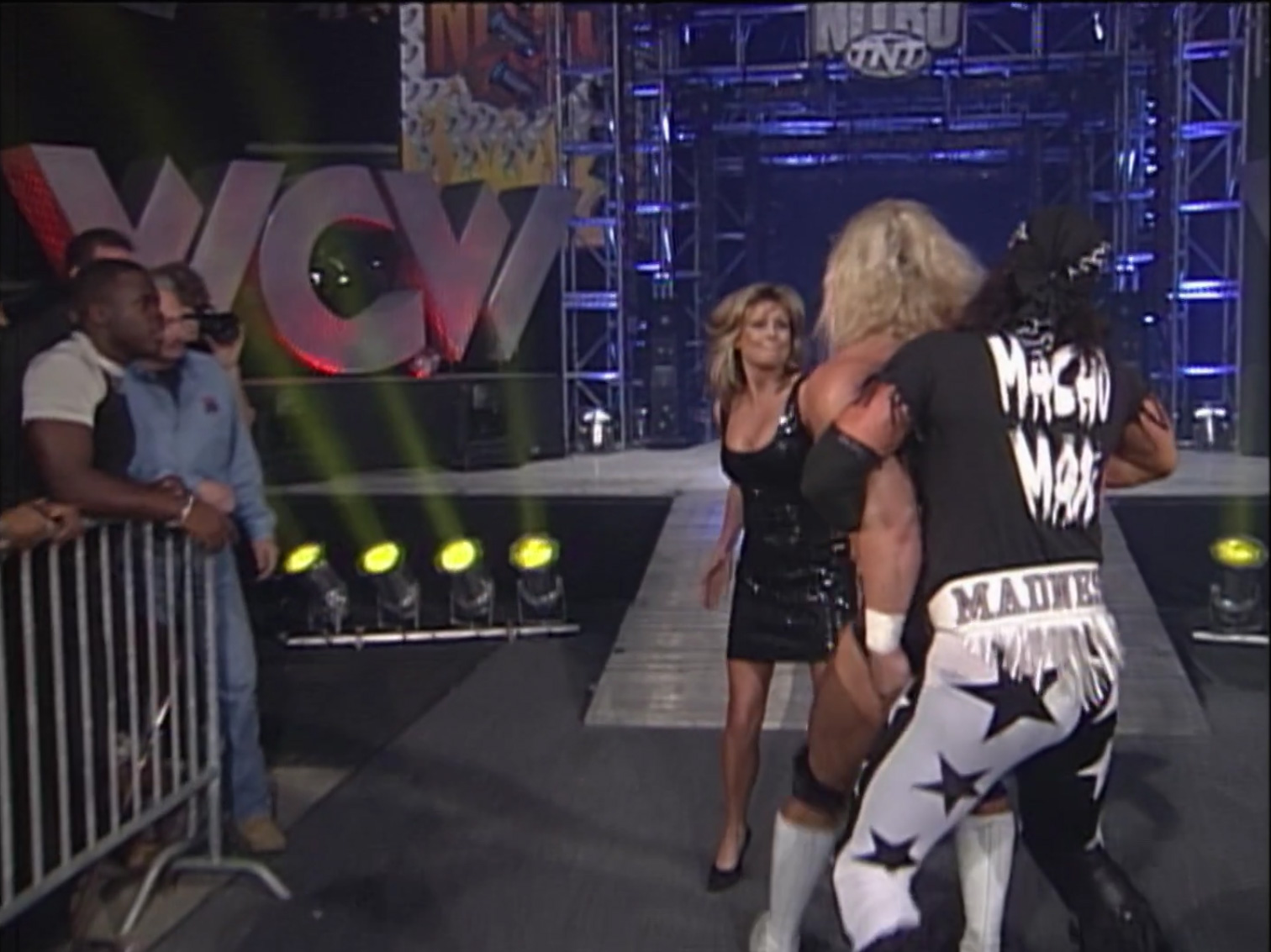 We then revisit Thunder when the Steiners retained their titles, but Scott was selfish with the victory.

Following a commercial break, Jericho berates the Jacksonville faithful. When he notices that Nitro has returned to air, he changes his tune. As Mysterio makes his entrance, Jericho interrupts and attacks him. WE HAVE A HEEL TURN! Jericho then presses Mysterio overhead and delivers a backbreaker. As he follows with a double underhook backbreaker, Jericho applies a LionTamer. Guerrera makes his entrance yet trips over the top rope.

Summary: Barely a contest due to the pre-match attack by Jericho.

We then revisit Thunder when Dillon held up the World title much to Sting’s chagrin.

Hogan and Bischoff return to the ring, and Hogan will have Holmes get an injunction in federal court regarding the World title.

At the entrance, Okerlund interviews WWF defector WCW newcomer Jim “The Anvil” Neidhart who takes exception with Flair’s comments last week. Also, Neidhart believes Bret is the best, not Flair. Speaking of Flair, he joins the interview and asks Neidhart to repeat himself. A challenge between them ensues, and Neidhart enters the ring. After Flair joins him in street clothes, he removes his jacket, takes brass knux out of his pocket, and CLOCKS Neidhart.

With Neidhart OUT COLD, Flair knocks out referee Billy Silverman. He then hooks Neidhart in a ring-post figure-four leg lock. That’s Bret’s move! Speaking of Bret, he storms to the ring to brawl with Flair and aid his brother-in-law. The fight continues at ringside until Flair runs away. 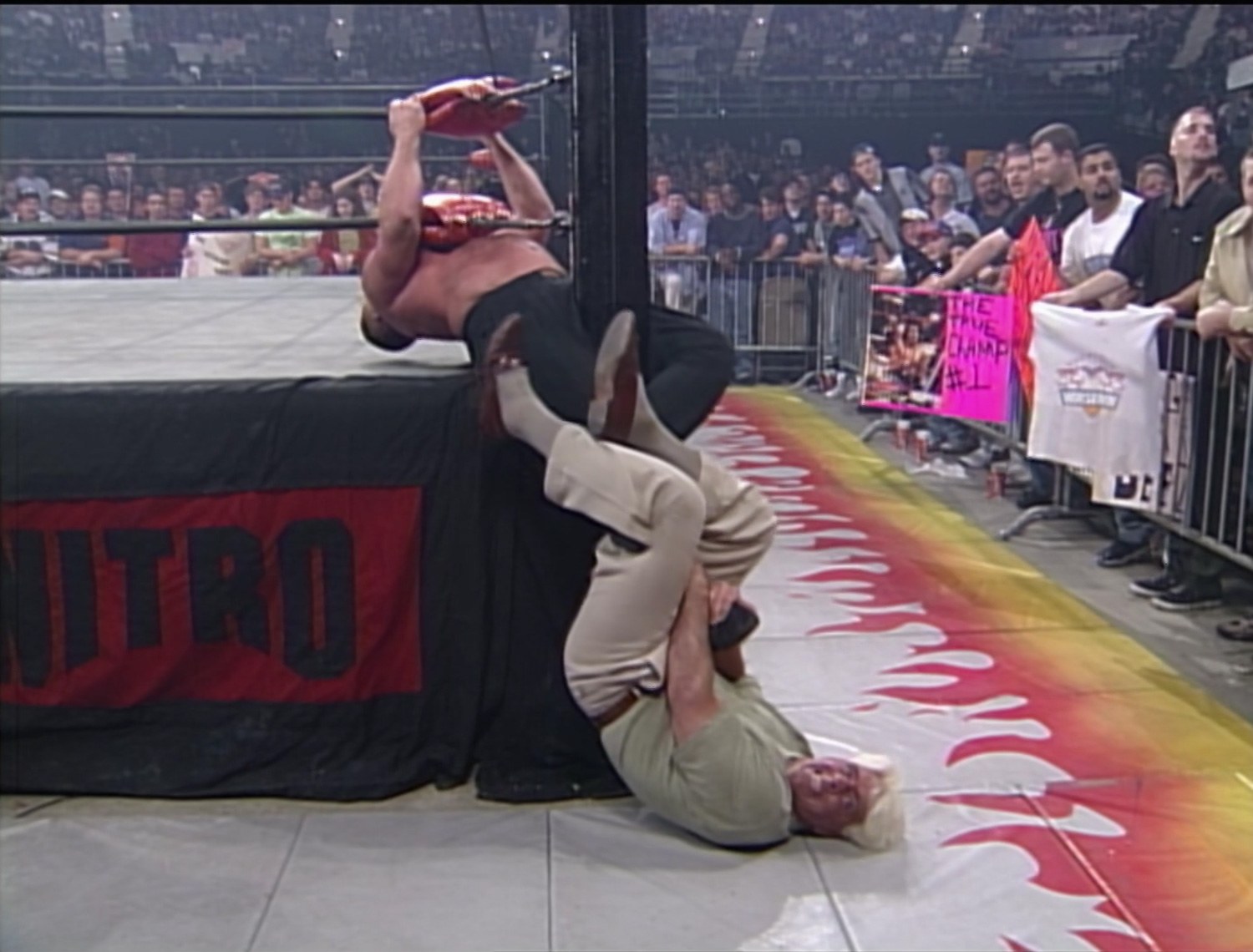 Summary: With questions revolving around the Steiners, the Outsiders’ regaining the titles made sense. Also, when the Steiners originally won the World tag titles, Nash was out with a knee injury, so the Outsiders reclaimed what they technically didn’t lose in the first place.

After the match, Hogan questions Savage about his motives. Nash then saunters after Savage while Hogan tries to play peacemaker. How will they coexist on Thunder?

Conclusion: The obvious question is: can Savage and Nash get along? In addition, the Outsiders dethroned the Steiners with Savage’s inadvertent assistance. The Hart-Flair feud is heating up with Neidhart’s arrival being spoiled by Flair. The Nash-Giant feud was accelerated with the performance bond stipulation while Jericho finally turned heel by making Mysterio into mush. Lastly, the Savage-Luger feud continues with Elizabeth getting involved.

This was an action-packed episode to combat the live RAW is WAR. I believe WCW did more than enough to maintain its audience, and it was oodles of fun.