It’s the fallout from Starrcade ’97! What surprises does WCW have in store for us? How will Hogan respond to his loss last night? Let’s find out!

To begin the show, purple and gold balloons fall from the ceiling to celebrate WCW.

Schiavone then introduces the victorious Zbyszko to a raucous ovation and informs nWo fans 18-25 with no job and living at home to turn on “Space Ghost Coast to Coast” on the Cartoon Network. HA!

Summary: Showcase match for Goldberg. Fact: Glacier’s entrance was longer than the match.

On WCW Saturday Night, DDP defends the US title against Hennig in a rematch from the PPV.

In the ring, “Mean” Gene Okerlund interviews Bret “Hitman” Hart. While Bret mentions “justice being served” and runs down the nWo, he cuts a babyface promo in support of WCW. To top it off, he name-drops Hogan, states “(Hogan) ran away from me a long time ago,” and wants to face him in a WCW ring. I smell a challenge!

From his ringside seat, Raven runs down Benoit.

Summary: The pummeling of Benoit has become routine for the Flock. Will someone PLEASE save Benoit?

Before I could finish typing that last sentence, Mongo sprints to the ring and heaves members of the Flock over the top rope to the floor.

At the entrance, Okerlund interviews “Nature Boy” Ric Flair who uncorks a “Mean Wooooooo Gene” for us. Upon singing WCW’s praises, Flair pulls out a clipping from the Baltimore Sun as well as some reading glasses. Flair then quotes Meltzer’s praise of him. 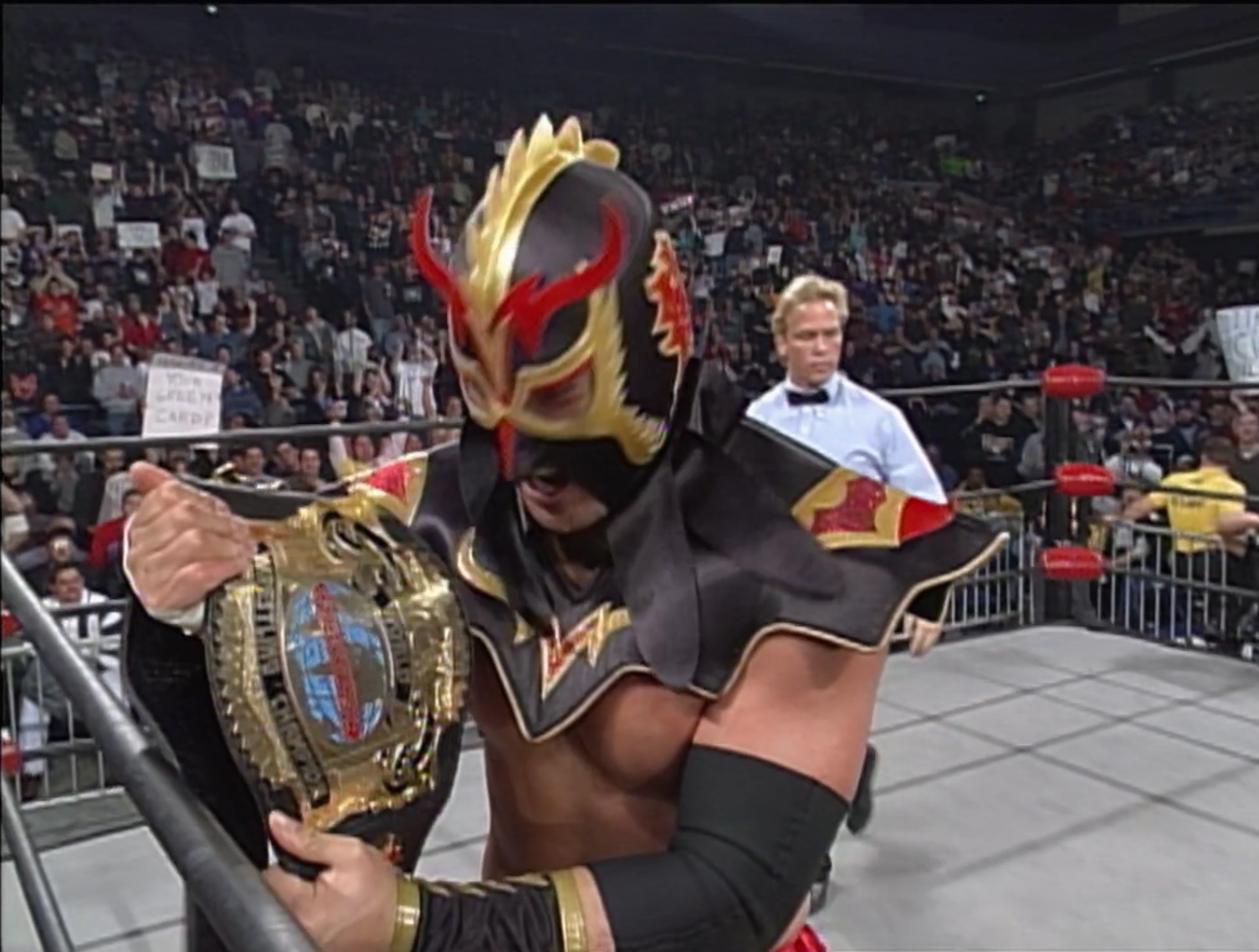 Summary: Short but solid victory for Dragon. The tidbit by Tenay gave away the outcome because I’m certain that WCW wanted to send its Cruiserweight champion to challenge Otani.

After the match, Eddie hammers Dragon to regain his heat.

Following a commercial break, the FORMER World champion “Hollywood” Hogan emerges and heads to the ring with Eric Bischoff. Hogan mentions referee Nick Patrick, and the replay of JJ Dillon’s announcement from last night is shown. Stills from the main event and Bret’s annihilation of Patrick follow. While Hogan strokes his own ego, he and Bischoff request Dillon fix the mess from last night.

Afterward, Heenan tries to join the broadcast team, but Schiavone dismisses him. Heenan pleads his case and er, weasels his way back on TV. To celebrate, the Nitro Girls dance at the broadcast table in halter tops and jeans. Schiavone shills the Nitro Party contest and rags on Heenan.

Summary: Solid workrate from Mortis before he put the NEW US champion over.

After the match, Vandenberg gets up on the apron, but DDP clobbers him.

At the entrance, Okerlund interviews Dillon. While he’s ecstatic about WCW and its loyal fans, Dillon upholds Sting’s victory from last night. He then mentions Sting’s inclination to “put the title on the line tonight.” Whoa! Someone from the nWo will get a title shot. 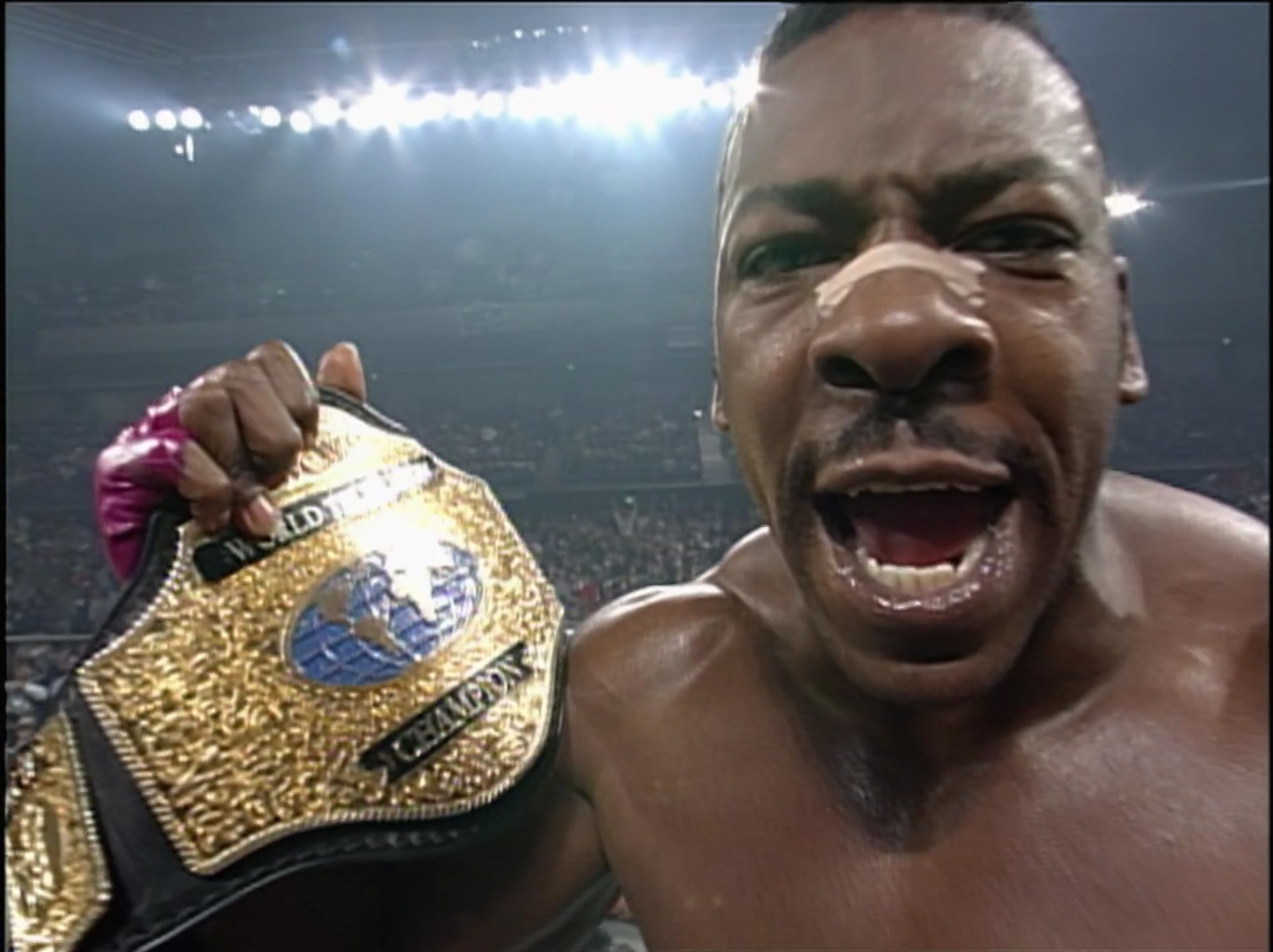 Summary: Considering WCW had been flaunting Disco with his Chartbuster, the Baltimore faithful was STUNNED by the upset victory by Booker T. Great job, Booker!

After the match, Stevie Ray comes to the ring to congratulate his brother.

At the entrance, Okerlund re-interviews Dillon. To offer his reply to Dillon, Bischoff re-emerges and offers Hogan as the nWo challenger for the World title match tonight. Methinks Bischoff figured out that the WWF would pit Owen versus Michaels and wanted to beat them to the punch.

After the match, an irate Jericho tosses ring announcer David Penzer from his chair. He then grabs the chair and WALLOPS the ring post with it. To punctuate his tantrum, Jericho yells “I’m sick of this. I’ve had enough.” Character development on the horizon, perhaps? 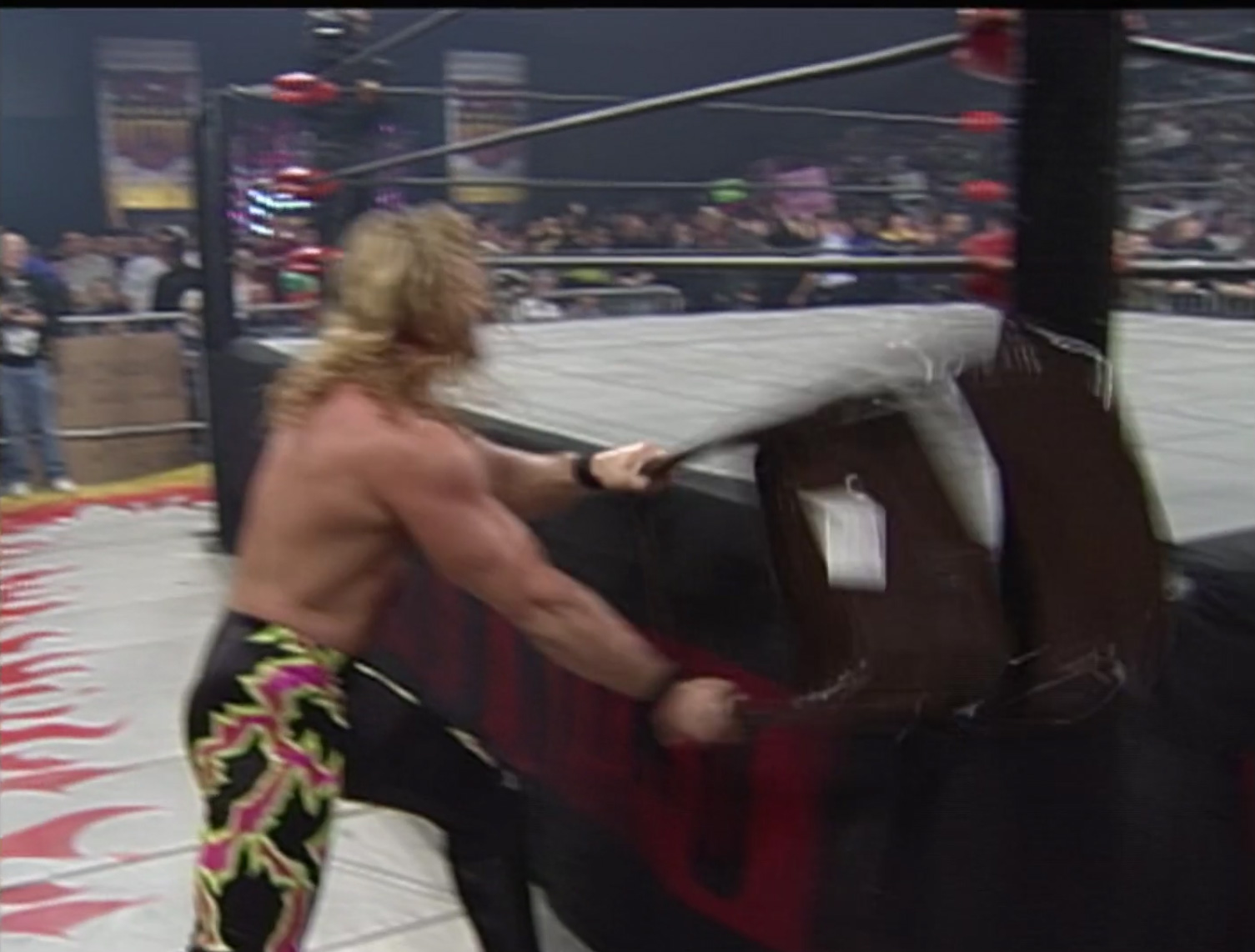 Nitro Girls dance at the entrance wearing pink and silver.

Next, Scott Hall emerges wearing an nWo Monday Nitro t-shirt and touk. When he conducts his survey, the Baltimore faithful give a decent reaction to WCW but sing “nWo” like sheep for him.

Following a commercial break, Billy Ripken, brother of Hall of Fame shortstop Cal Ripken, was shown on camera. Billy debuted in 1987 and played until 1998. 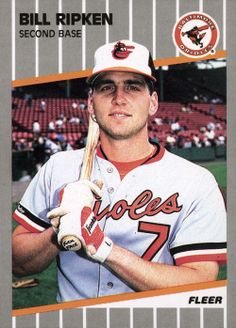 Prior to the next match, Bagwell enters the ring and cuts a promo on Luger.

Summary: Hopefully this feud is finally over. Bagwell needs a different opponent to get himself over. 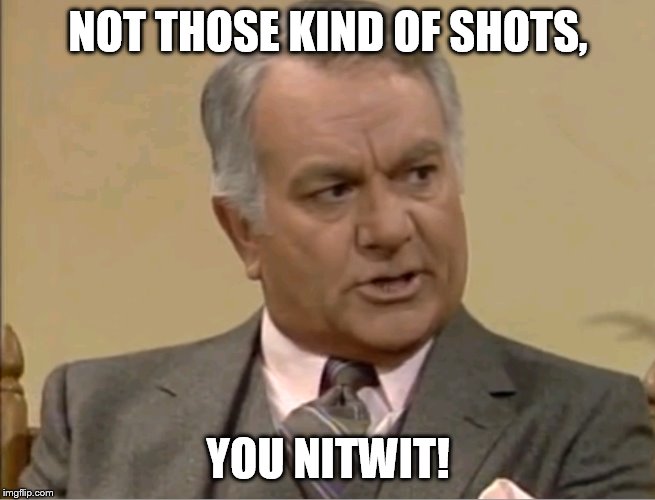 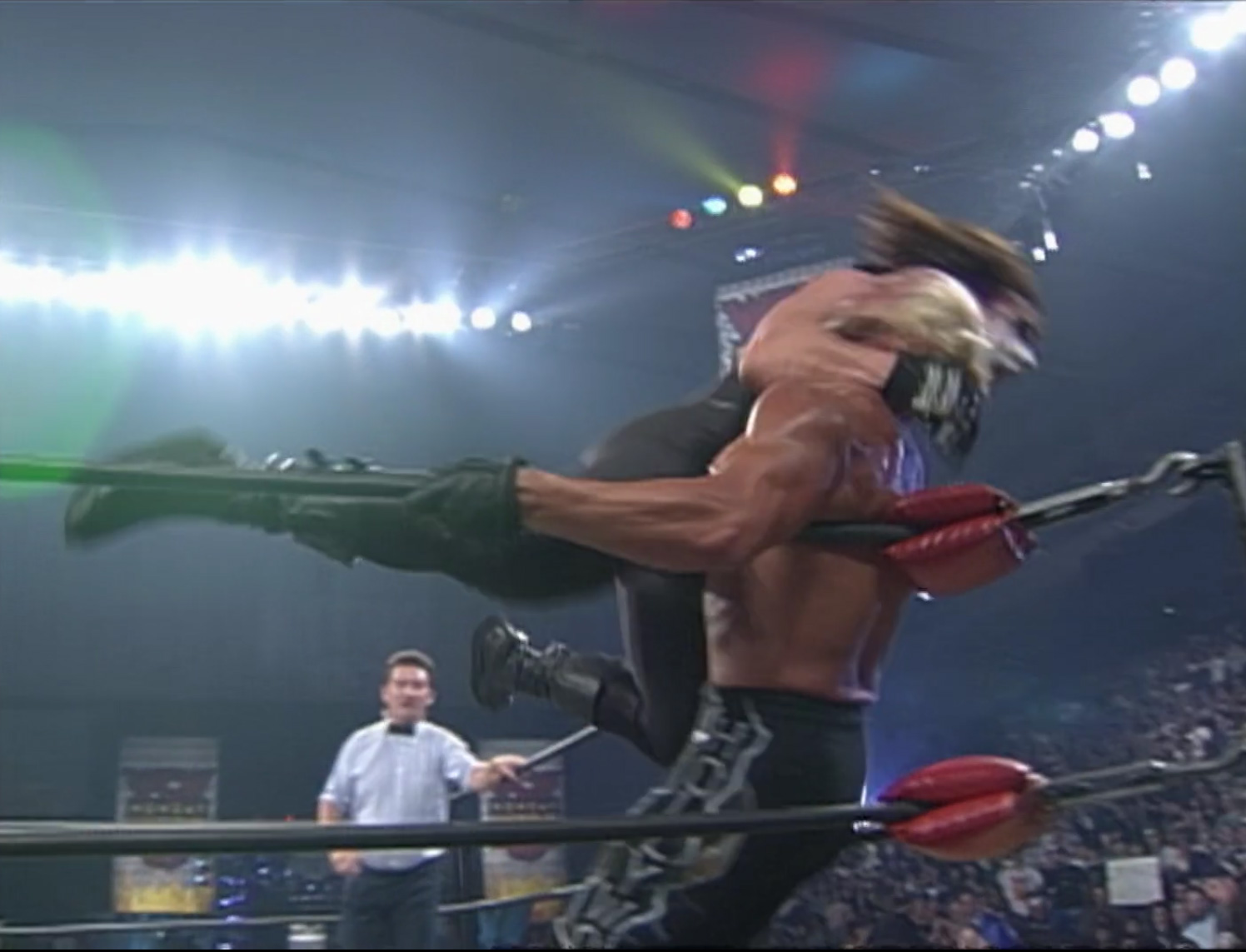 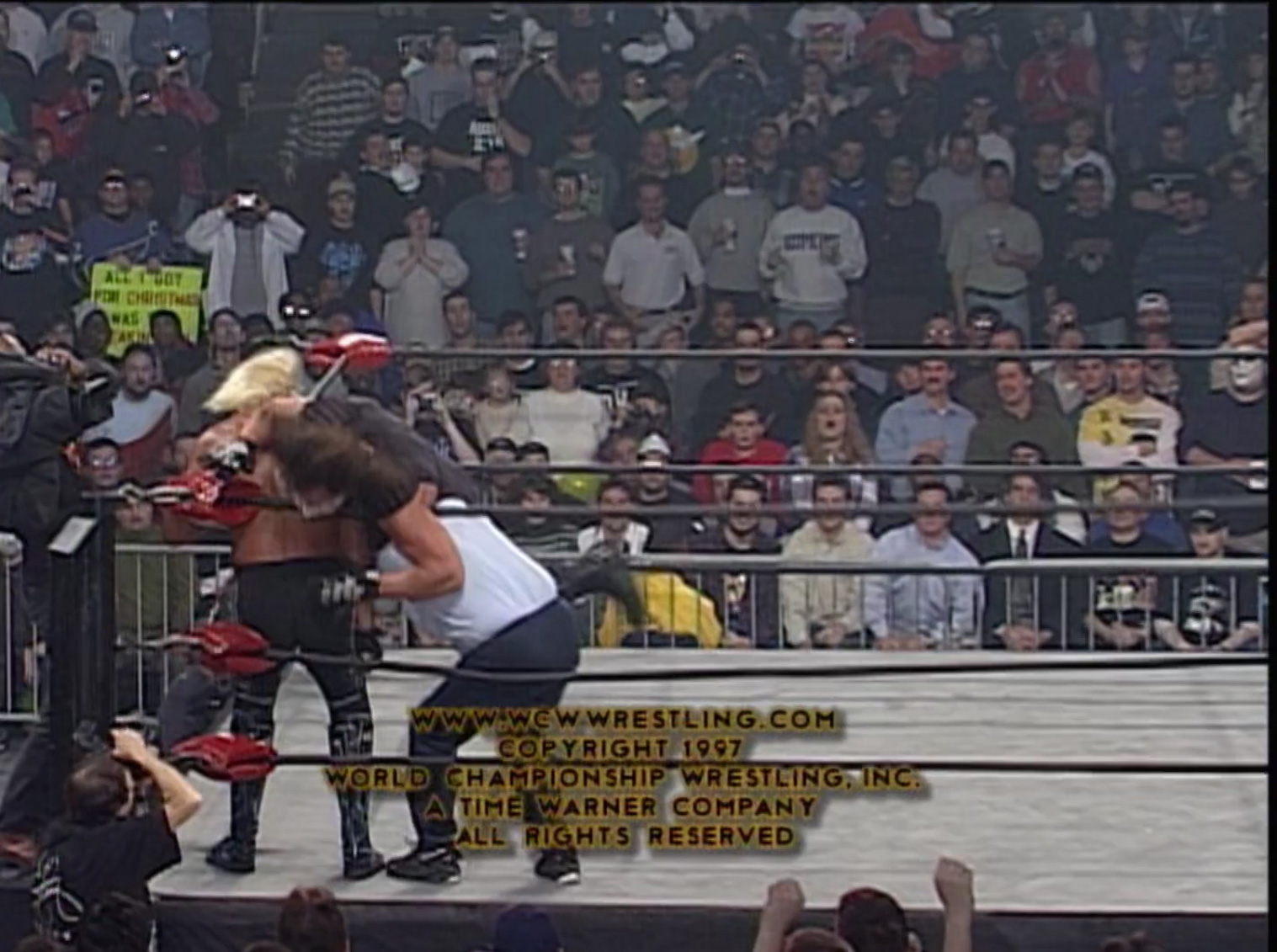 Summary: If ripping off the customer was WCW’s motive, they’ve accomplished it. Between the PPV and the end of this show, WCW would rather have controversy instead of satisfied viewers.

Conclusion: Up until the finish of the main event, this show was GANGBUSTERS good. Two title changes combined with a Sting-Hogan rematch cause me to: