It’s the go-home show for Starrcade ‘97! There’s no possible way that WCW could screw this up, right? Let’s find out!

Nitro Girls dance in the ring to holiday-themed music while dressed like “Santa’s little helpers.”

Bischoff cuts a promo on Zbyszko and promises a “treat” for nWo fans.

Summary: Decent match with Eddie using psychology until he bailed to escape Finlay’s finisher. Also, I agree with the Macon faithful that “Eddie sucks.”

We then see highlights of ‘Sack Master” Kevin Greene beating up Mongo earlier this year.

Video featuring Giant versus Kevin Nash airs. Does that whet your appetite for the PPV?

Summary: While Meng’s strategy backfired, Mongo’s strategy worked as the Macon faithful ate it up with a spoon.

We then see highlights of Reggie White tearing apart Mongo earlier this year.

In the ring, “Mean” Gene Okerlund interviews DDP who will substitute for Flair at Starrcade ‘97 against Hennig. While he enjoys the holidays, DDP will enjoy his Christmas present of giving Hennig the “bang.”

Tenay voices over a tale of the tape for the battle of the giants at Starrcade ‘97. Order NOW!

Summary: Although not as great as last week’s match, los luchadores showed why they belong on Nitro. Fantastic work, gentlemen!

Prior to the next match, we revisit last week’s episode when Benoit dove onto the Flock only for Hammer to toss him back to ringside.

Summary: The entirety of the rating goes in Benoit’s favor as Hammer is U-S-E-L-E-S-S.

After the match, Saturn tosses Benoit into the ring and applies a Rings of Saturn. Methinks Saturn will replace Raven this Sunday.

We then see highlights of Jim Kelly getting involved on Nitro a couple of weeks ago.

Upon returning from commercial, the nWo shoos Schiavone, Tenay, and Zbyszko away from the broadcast table. By my clock, the show is at 45 minutes. Bagwell then bullies cameraman Jackie Crockett into giving him the camera and wearing an nWo Monday Nitro t-shirt. I want one! 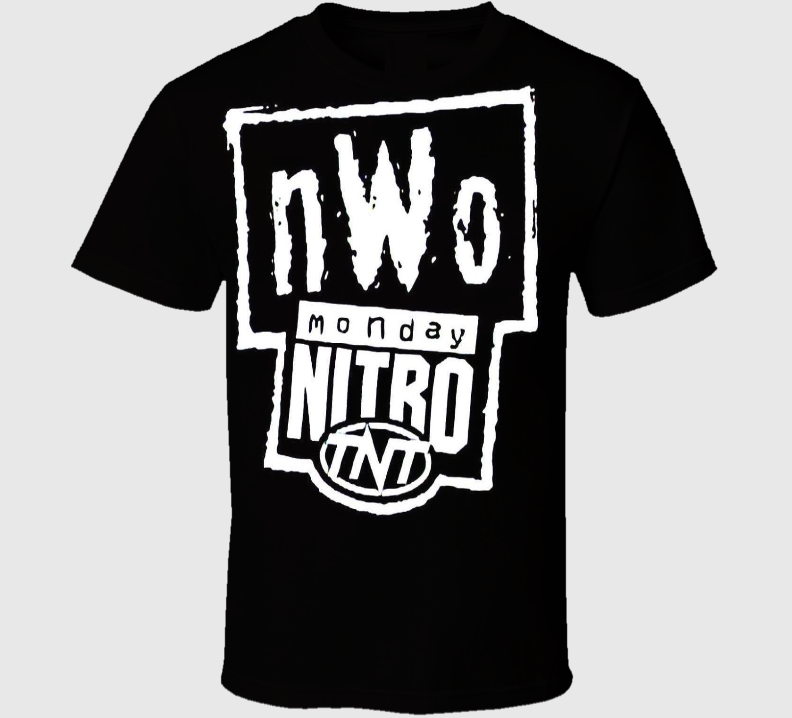 Furthermore, Rude bullies more production staff into wearing nWo t-shirts. While the staff removes WCW Monday Nitro placards, the nWo forces them to replace them with nWo ones. Konnan then storms the production truck and bullies director Craig Leathers. Next, Norton uses his brute strength to dismantle the huge steel WCW letters by the entrance, and Konnan showcases an nWo Monday Nitro banner on the production truck. As the destruction of the set continues, boos can be heard among the Macon faithful. We then see the nWo Monday Nitro logo on the broadcast table as well as banners replacing the WCW ones. After Bagwell heads to the ring, he antagonizes ring announcer David Penzer. When Penzer denounces the nWo, Bagwell tosses him down to send him packing. nWo Monday Nitro banners nWo hang above the ring as we head to commercial after nine minutes. When we return, Bagwell has spray-painted “nWo” on the mat. Rude signals for pyro, and sparks fly. Next, a heavy sign is lowered to the entrance sporting the nWo Monday Nitro logo. To top it off, an opening montage for the new show airs. 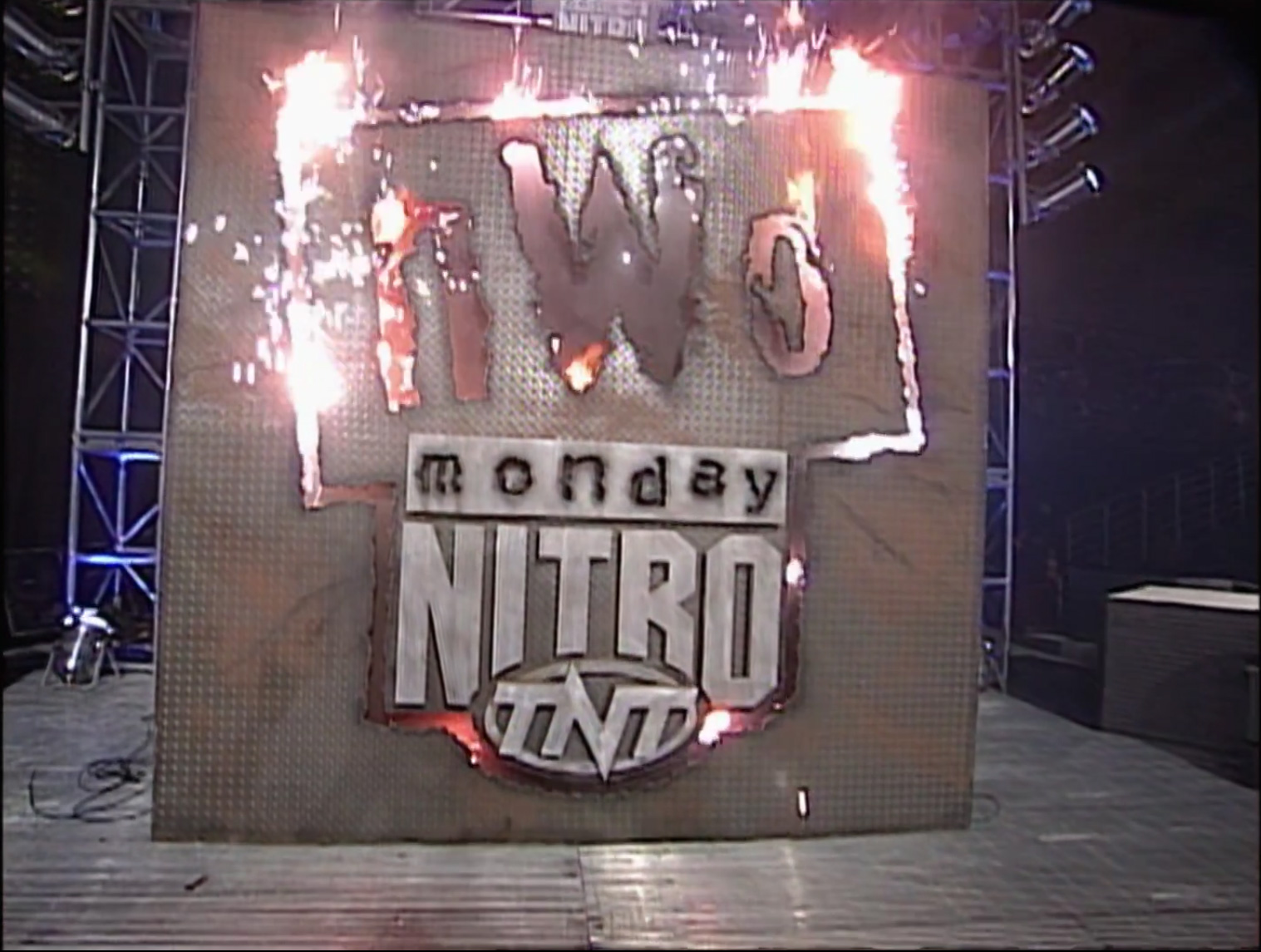 With thirteen minutes of actual show wasted with the transformation minus commercials, Eric Bischoff rides a Harley to the ring. He then introduces the entire nWo including “Hollywood” Hogan. To celebrate Christmas, Bischoff dedicates the inaugural episode of nWo Monday Nitro to Hogan. Meanwhile, nWo propaganda falls from the ceiling.

Next, Bischoff summons the production crew to bring out another Christmas present—a Harley-Davidson motorcycle. Obviously, they brought out the wrong one because another production crew member rides out the “Hollywood” Hogan motorcycle for Hogan. But we’re not done! To top it all off, Bischoff bestows the “Saturday night wheels” for Hogan. An extremely long Mercedes stretch limousine complete with a hot tub drives into the arena. Upon completion of a commercial break, JJ Dillon greets Rick Steiner and Ted DiBiase backstage. He informs them that they don’t have to participate in this nonsense. Despite Dillon’s insistence, they decide to go to the ring anyway. At this point, more than 25 minutes have elapsed with ZERO matches.

Prior to the next match, we revisit the horrific highlight of Norton dumping Rick on his head much to the delight of the nWo.

Bischoff, “Ravishing” Rick Rude, and Kevin Nash sat at the broadcast table for YOUR enjoyment.

Summary: I realize the storyline progression of putting these guys one-on-one this week after what transpired last week; however, the Macon faithful needed a wake-up call after sitting idle for 30 minutes waiting for another match.

After the match, Konnan and Norton double-team Rick until Scott heads to the ring to rescue his brother. When Vincent makes it 3-on-2 for the nWo, Ray Traylor evens it up for WCW by joining the melee. Thanks to Traylor’s charisma and enthusiasm, the Macon faithful AWAKEN! To top off the segment, DiBiase kicks Vincent at ringside. HA!

We the see highlights of Dennis Rodman battling Luger earlier this year. 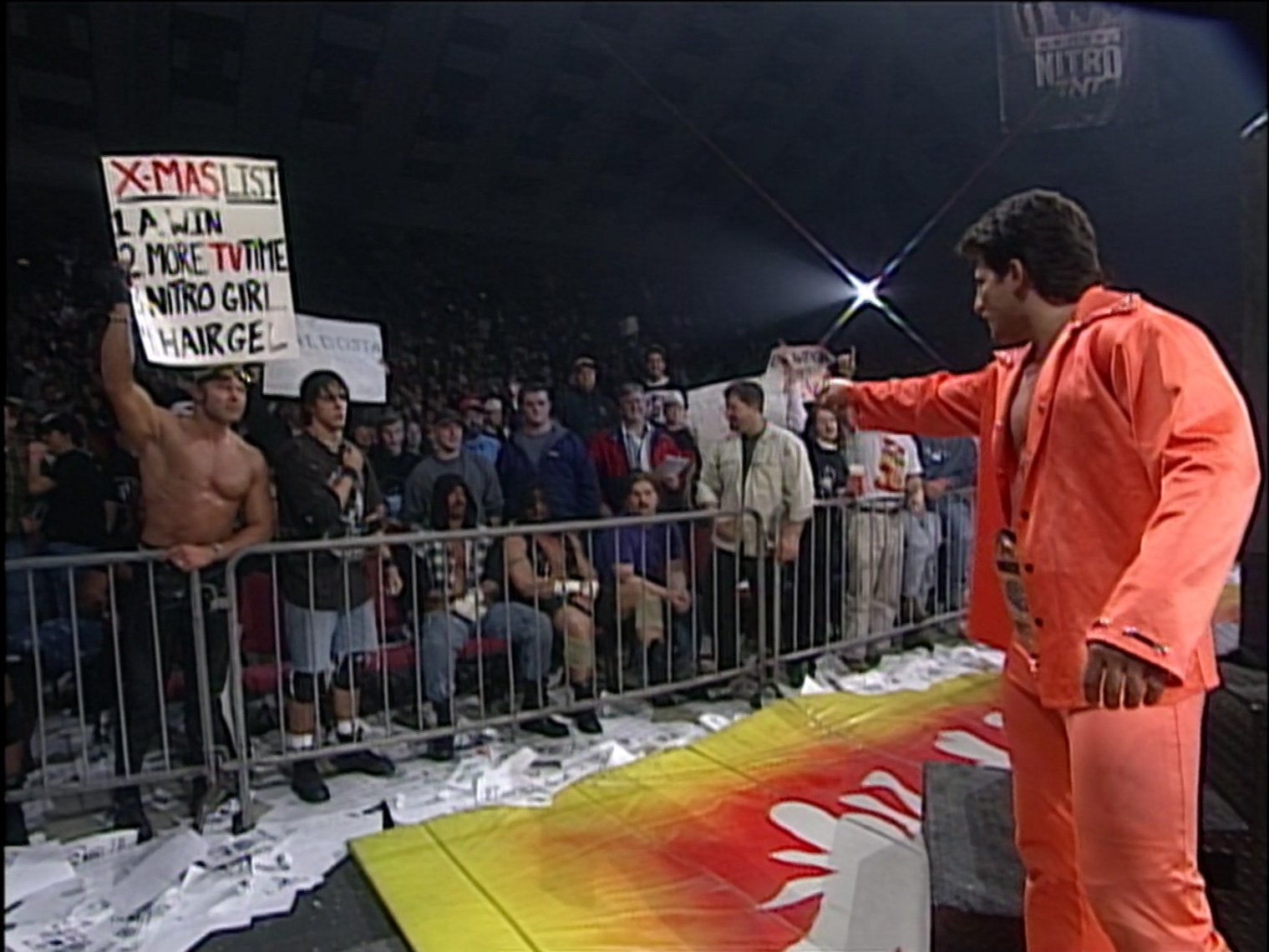 Summary: Showcase match for Hennig as he wasn’t going to lose or look bad prior to defending his title against DDP at Starrcade ‘97. Unfortunately, it diminishes the importance of the WCW World TV title with Disco looking like a jabronie.

The replay, shown in black and white, was shown twice.

Heenan headed to the broadcast table to “talk business.” Upon name-dropping the World Wrestling Federation, Heenan butters Bischoff up by calling him the “Donald Trump of wrestling.” Yikes! Nonetheless, he wants to broadcast Nitro. Upon showing some fake emotion, Bischoff replaces Nash with Heenan.

Summary: Showcase match for Harlem Heat as Raven’s Flock continues to appear lost without its leader.

Summary: Since Bagwell has the match against Luger at the PPV, he went over.

After the match, Bagwell argues with Jay and CLOBBERS him from behind. What a role model.

Following a commercial break, the nWo returns to the ring, and Bischoff presents Hogan with a solid gold replica of the WCW World title ring. Bischoff then displays an enlarged black and white photo of the April 29, 1985 issue of Sports Illustrated when Hogan graced the cover. Not to be outdone, an enlarged photo from Rocky III when Thunderlips choked Rocky is unveiled. 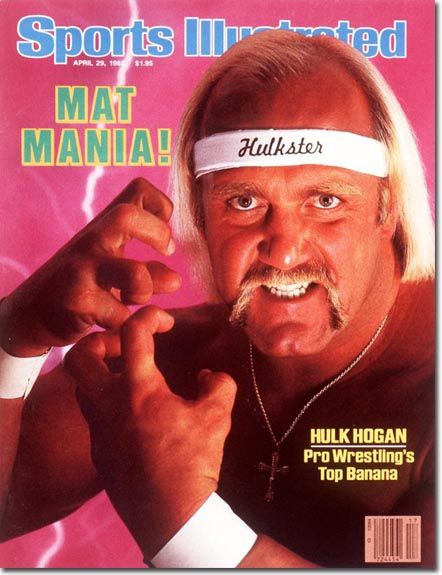 Before Savage heads to the ring, he joins the broadcast table to dedicate the match to Rude. Following a commercial break, Tenay flubs by calling the show “WCW Monday Nitro.” Rude and Heenan take him to task for it.

Summary: If you like your main event nWo-flavored, this match is for you.

Hogan and Bischoff make yet another appearance in the ring. When Hogan cuts a promo on Sting, a production crew member brings yet another present for Hogan. Bischoff seems surprised by the wrapped gift despite Hogan’s profuse gratitude. As the limo, which had backed up earlier in the show, returns, Bret Hart sits in the back with the lovely ladies.

Bret then heads to the ring while Hogan unwraps his gift. Inside is a “Hollywood” Hogan head, and Hogan is aghast. While the present would appear to come from Sting, it also has Bret’s blessing. Like last week, Sting appears atop the entrance. 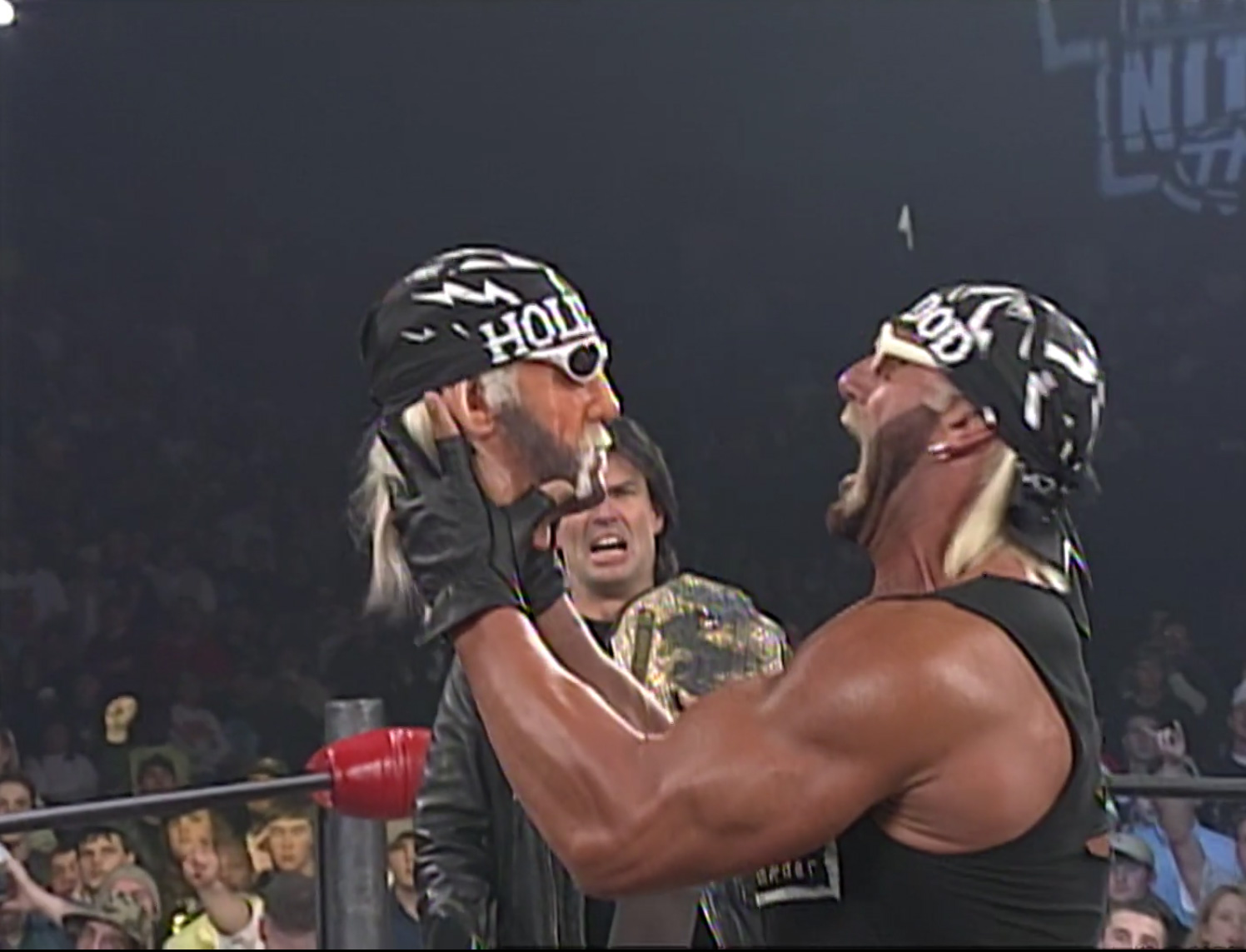 While Hogan cowers in fear, Sting zip-lines to the ring as the show ends. Conclusion: Truly, if you like your Nitro nWo-flavored or are the biggest Hogan fan, this is the show for you. Otherwise, this show is the epitome of ego and stupidity. As I mentioned during the show, there’s at least a 30-minute break where ZERO wrestling occurred. I wonder if the Monday night wrestling audience stays tuned or switches to RAW is WAR.

Despite the relative short drive between Atlanta and Macon, WCW transported extra banners, signs, etc. to reflect the “new” program. Attached to that exuberant cost were the motorcycles, the extra-long limousine, the nWo montage, and the zip-line for Sting which should have been reserved for the PPV. I truly wonder if this episode comes back to bite WCW in the ass.