Can the Road Warriors stop the freight train that is DeGeneration-X? What does Austin have in store for the Rock this week? Who will challenge Michaels for the WWF title at the next PPV? Let’s find out!

Check out that scratch logo!

Suddenly, the lights go out, and Kane and Paul Bearer make their entrance. Kane comes into the ring and stares face-to-face with Undertaker. Bearer grabs the microphone and again accuses Undertaker of murder. When Bearer instructs Undertaker that he must face his brother, Kane slaps Undertaker. Kane tries another strike, but Undertaker blocks it but doesn’t retaliate. Instead, he leaves without incident. 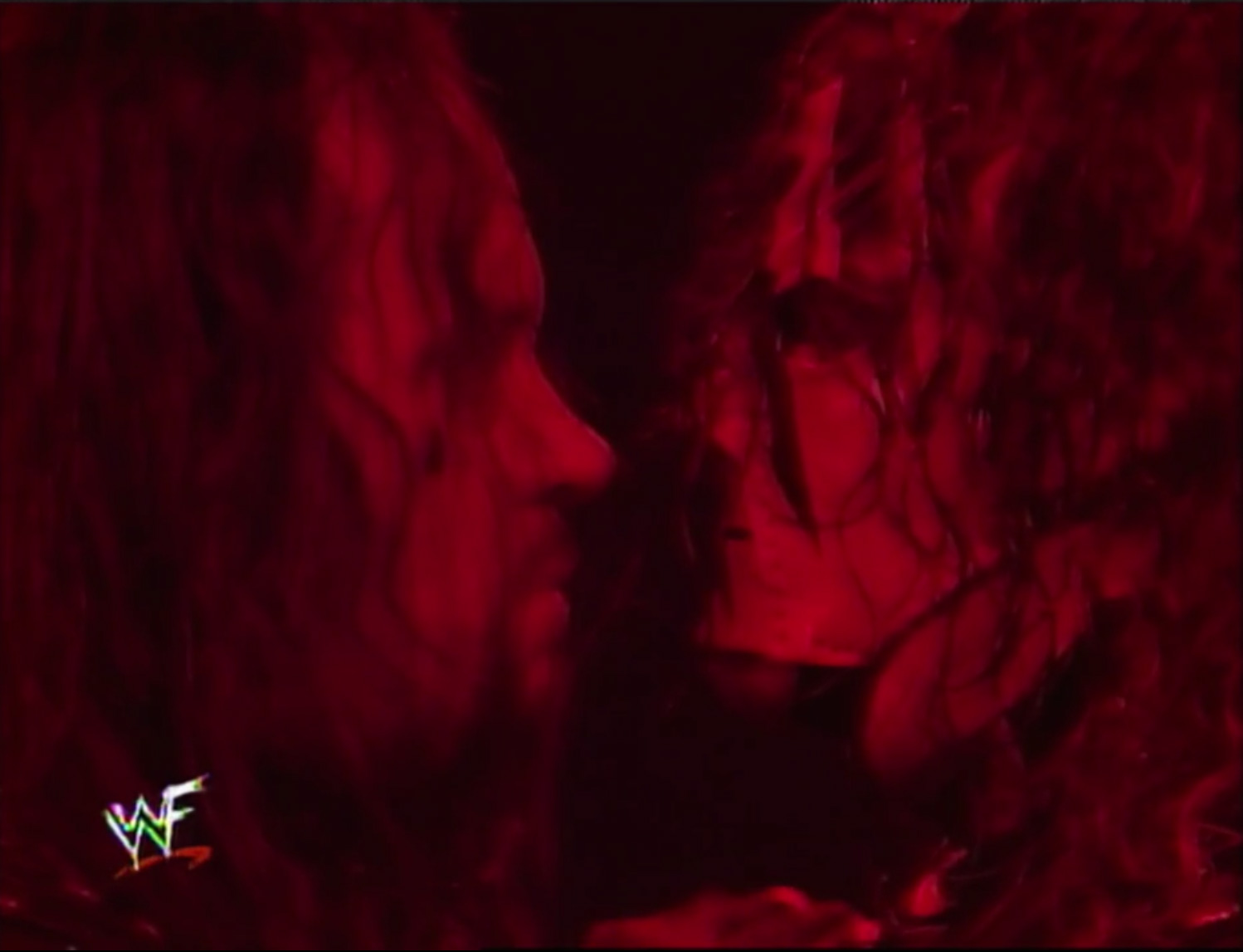 Promo for WWF: The Music Volume 2 airs. Get yours today!

1-800-COLLECT REWIND: We revisit last week’s show when Brian Christopher swerved all of us by attacking Michinoku while disguised as an apparent ally.

Prior to the opening match, we revisit the PPV when Michinoku was presented the title belt.

Summary: More chicanery by the Lawlers to Michinoku was the result of this clash of styles.

Afterward, Christopher continues his assault and checks on his father. Michinoku recovers and hits a spinning heel kick to Christopher. Following a huracanrana, Michinoku escapes a double-team by the Lawlers and heads for safer ground.

JR shills the WWF Superstar Line and mentions a “near-riot.” More on this later.

In a quick promo for the main event, the Road Warriors cut a promo where Hawk refers to DeGeneration-X as “Michael Bolton (before the haircut), Fabio, and RuPaul.” HA!

Following a commercial break, the Nation of Domination comes to the ring. We then revisit last week’s episode when Austin forfeited the IC title to the Rock rather than lose to him at the PPV. The Rock, with fanny pack, refers to himself as the “People’s Champion” to ZERO reaction. When Faarooq wants to interject, Rock cuts him off with “the champ is talking.” 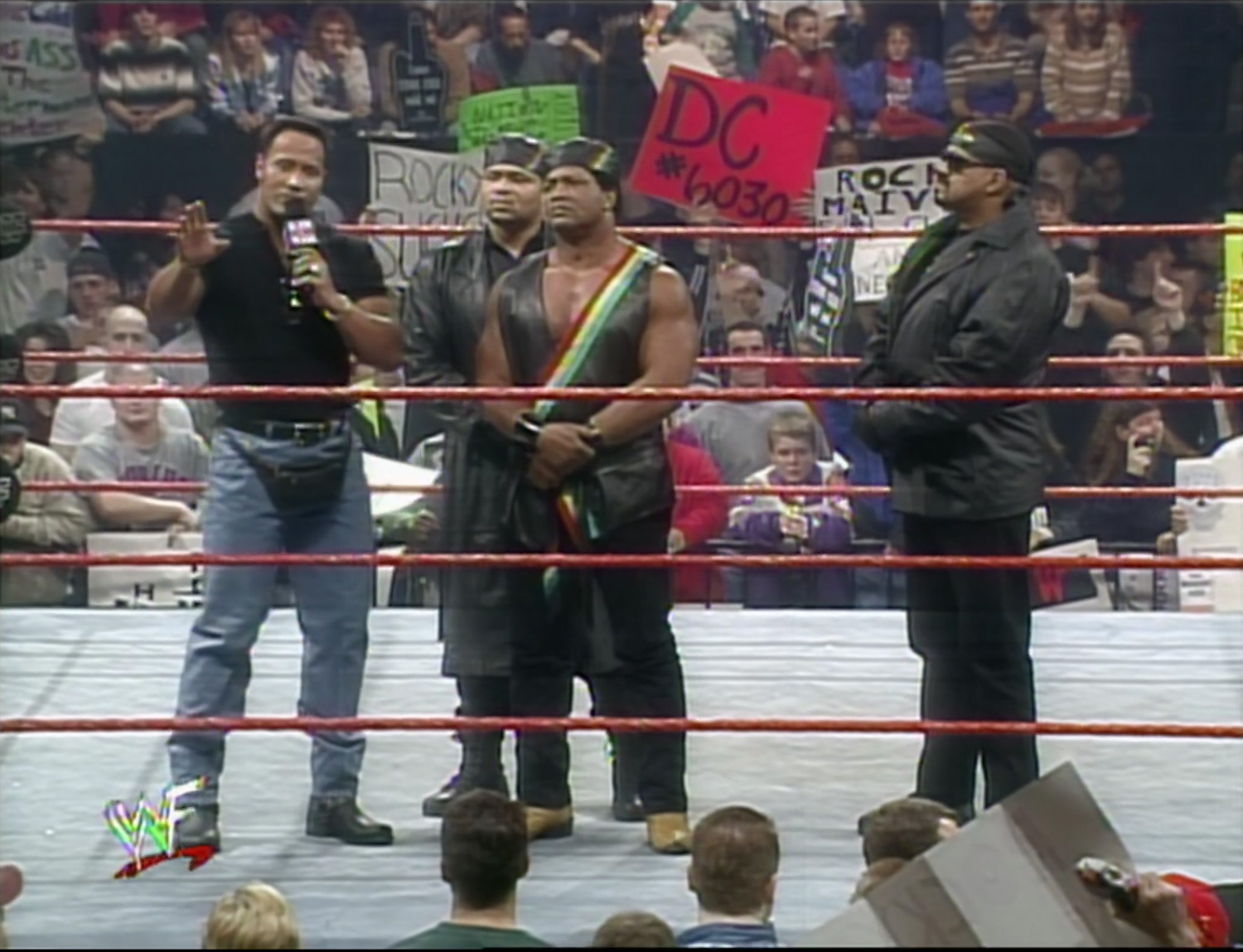 Prior to the next match, we revisit last week’s episode when Dude made Gunn his bitch and relegated him back to the tag team ranks. Of course, the tag champs took exception sending Dude reeling into the 21st century.

Summary: More storyline than match as you shall see.

After the match, Gunn brings a steel chair into the ring, but Dude intercepts him. Dude then delivers a Cactus clothesline and follows Gunn up the ramp. While Road Dog hammers Dude from behind, the New Age Outlaws suplex Dude on the steel entranceway. OUCH! Next, they try to send Dude eight feet down to the concrete floor, but Dude retaliates. Gunn attempts to hip-toss him down to the concrete, but Dude blocks it and clotheslines him.

As he also caught Road Dog with a clothesline, Dude succumbs to a DDT on the steel entranceway. When Dude returns to his feet, the New Age Outlaws use referee Mike Chioda as a battering ram to send Dude flying onto a table followed by the concrete floor. Double OUCH! Although they seem concerned about Dude’s safety, the New Age Outlaws put the boots to him. Evil! According to Meltzer, Dude suffered a fractured rib. 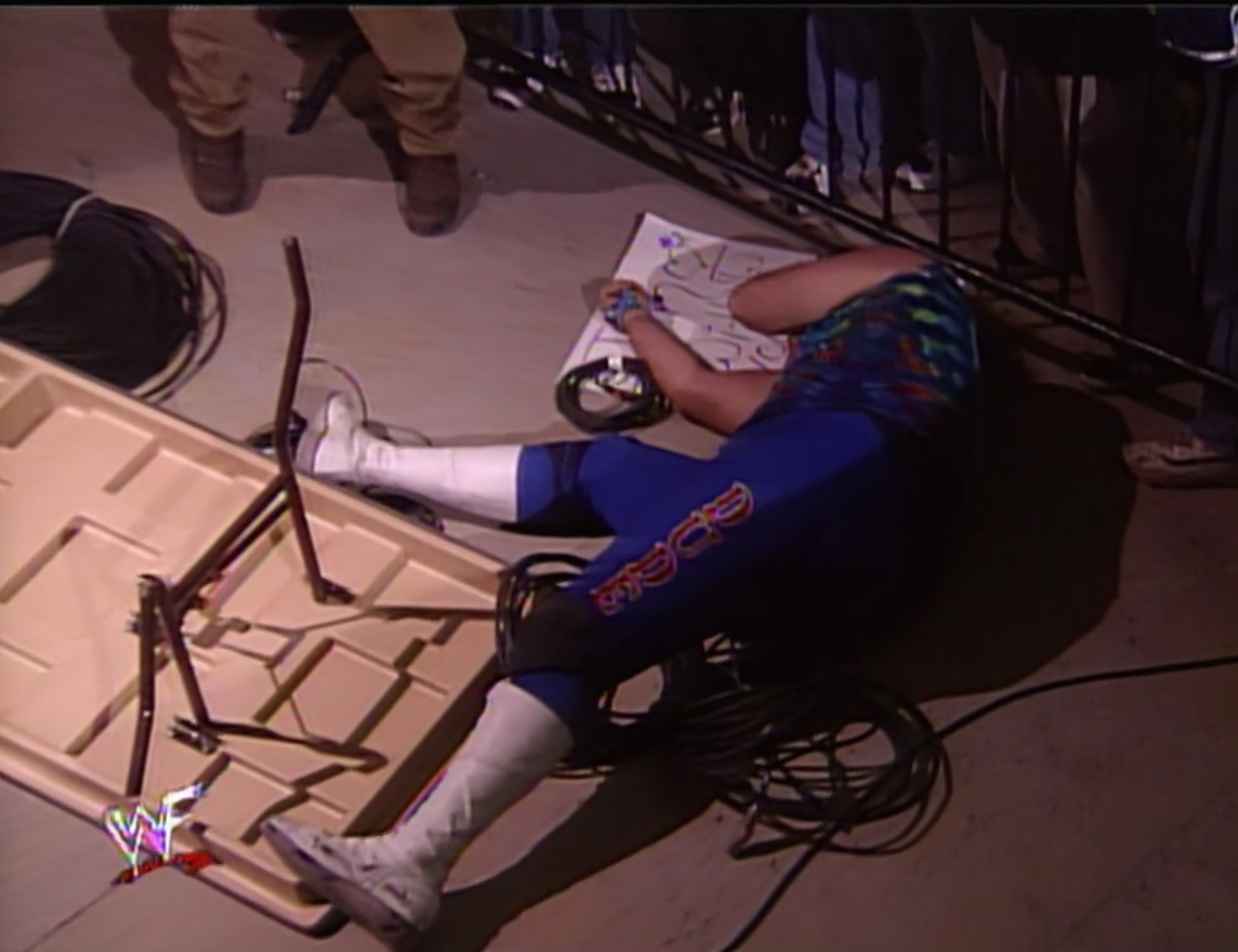 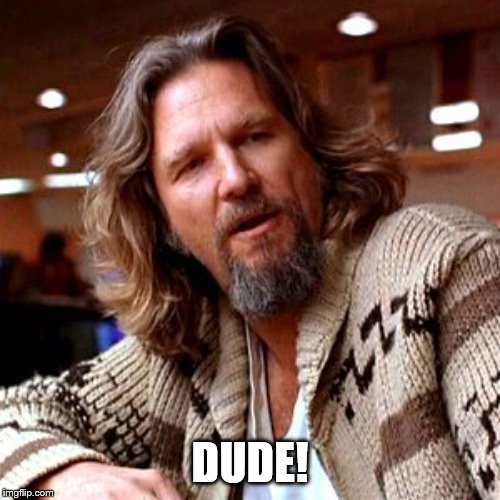 RAW is WAR is sponsored by the US Army, Lazer Tag, and Burger King.

We then revisit the PPV when Owen shockingly returned and shoved Michaels through the Spanish broadcast table. Following that, we see Michaels’ response along with Owen’s second ambush of Michaels.

Vince McMahon comes to the ring and requests Owen join him. Owen walks among the Durham faithful and receives an “O-wen” chant from them. Upon joining Vince, Owen adamantly uses a series of expletives in frustration but elects to remain in the WWF. While Vince tries to steer the interview in the direction of the WWF title, Owen shoots it down immediately.

Instead, he informs us that he wants to make Michaels’ life “a living hell.” After using another expletive, Owen cuts a promo on Michaels. Vince requests security to accompany him in the ring, and Owen stares him down. As he grabs Vince by the lapels, Owen offers Vince something not picked up by the microphone. He leaves with security escorting him through the Durham faithful who adorn him with “O-wen” chants again. 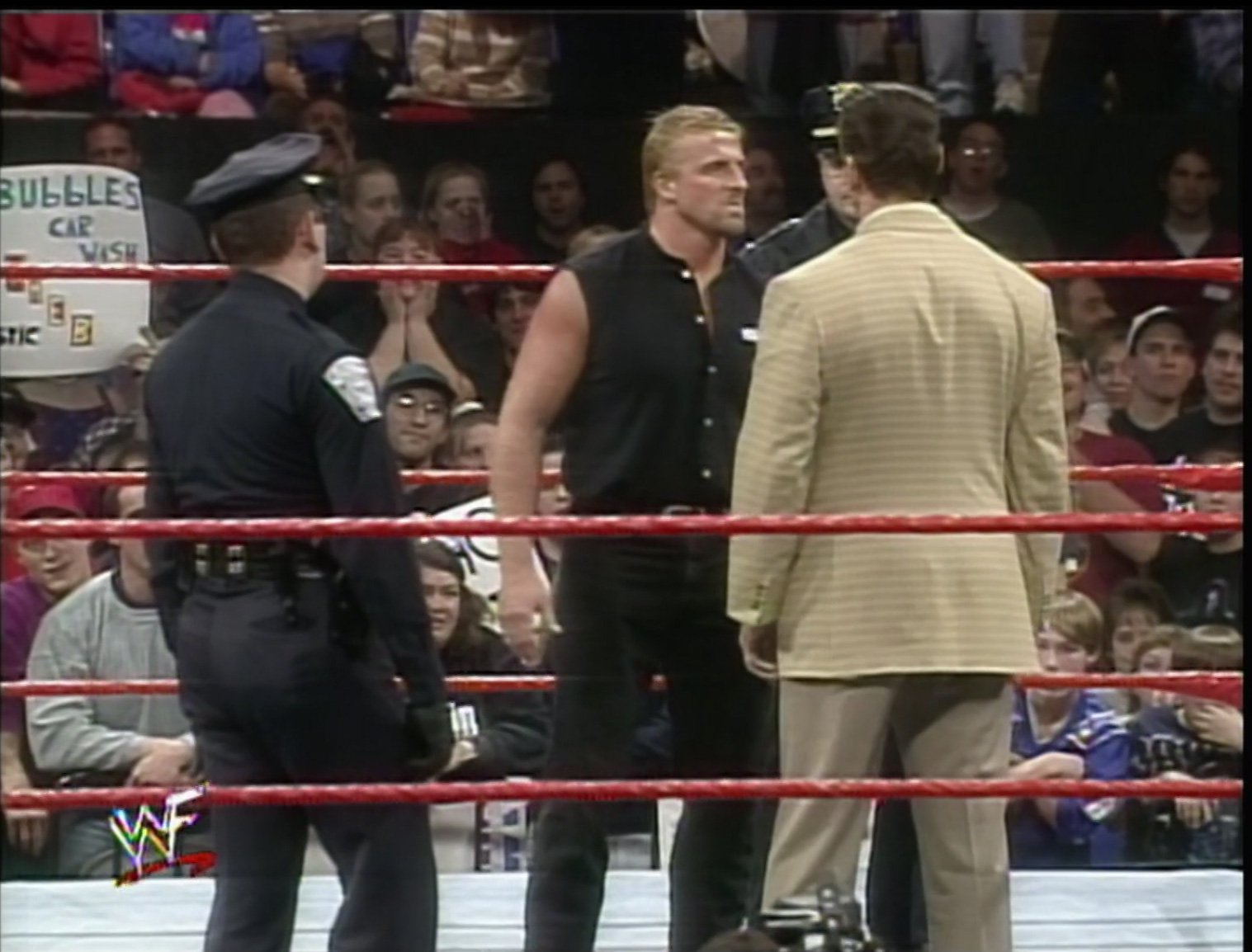 We then revisit last week when Sable unwrapped a potato sack to reveal a bikini that left nothing to the imagination.

Match 4: Tom Brandi versus the Sultan (w/ the Iron Sheik)

Summary: Showcase match for Brandi. More on this later.

After the match, Brandi celebrates in the ring, but Marc Mero hits the ring to spoil the party. In fact, he walloped Brandi so far south that Brandi believed he was already in Worcester. Mero continues to attack Brandi while the Durham faithful chants “Sa-ble.”

As the NoD returns to the ring, we revisit Austin’s mayhem upon Slaughter, JR, and Vince. Footage from the PPV includes Austin’s decimation of the NoD thanks to an Austin 3:16 Chevy pick-up truck. Austin’s forfeiture is shown again as well as his attack on Rock.

When we return to the arena, Rock informs Austin that his time is up. Upon calling him a coward, Rock’s “pissed off.” Abruptly, Austin appears on the Titantron standing on a bridge with the IC belt. He then tosses a scuba mask, snorkel, and regulator over the edge. Continuing his promo, he tosses an apparently empty oxygen tank over too. He then includes swimming fins, a cell phone, and a pager to further insult Rock. To cement the promo, Austin tosses the belt into MerryMeeting Lake. 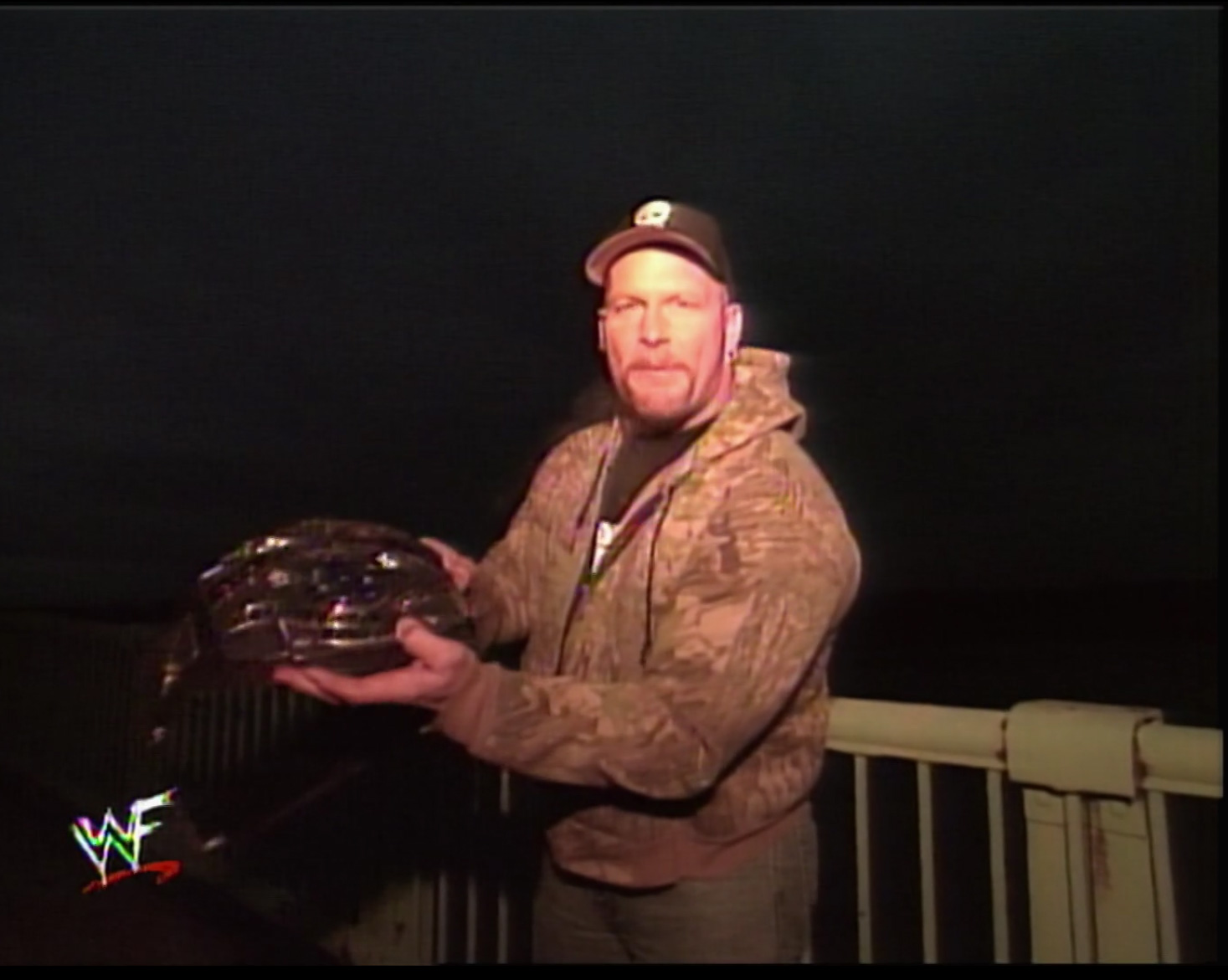 THE CURE FOR THE COMMON SHOW: In a pre-taped segment, Vince is ready to “open the creative envelope” to entertain the WWF audience “in a more contemporary manner.” He continues by stating WWF programming contains elements from soap operas like Days of Our Lives or MTV music videos. Also included are shows like Jerry Springer, King of the Hill, and Seinfeld.

Vince notes that the WWF acknowledges that the audience is “tired of having (its) intelligence insulted.” Furthermore, he explains that the audience is also tired of “good guys versus bad guys.” He then infers that the Hulkamania doctrines (e.g. prayers, vitamins) are “passé.” While asking for parental discretion for RAW is WAR going forward, Vince advises that other WWF programs on USA need no discretion. In other words, the Attitude Era has begun!

DeGeneration-X plays a game of roshambo to decide who will rid the WWF of Owen Hart. When HHH wins, Michaels doesn’t like Owen’s chances and follows with a quick promo on the Road Warriors. I’m certain the booking meetings were more intense.

Summary: With help from the tag formula, the match had a good pace until the storyline finish. 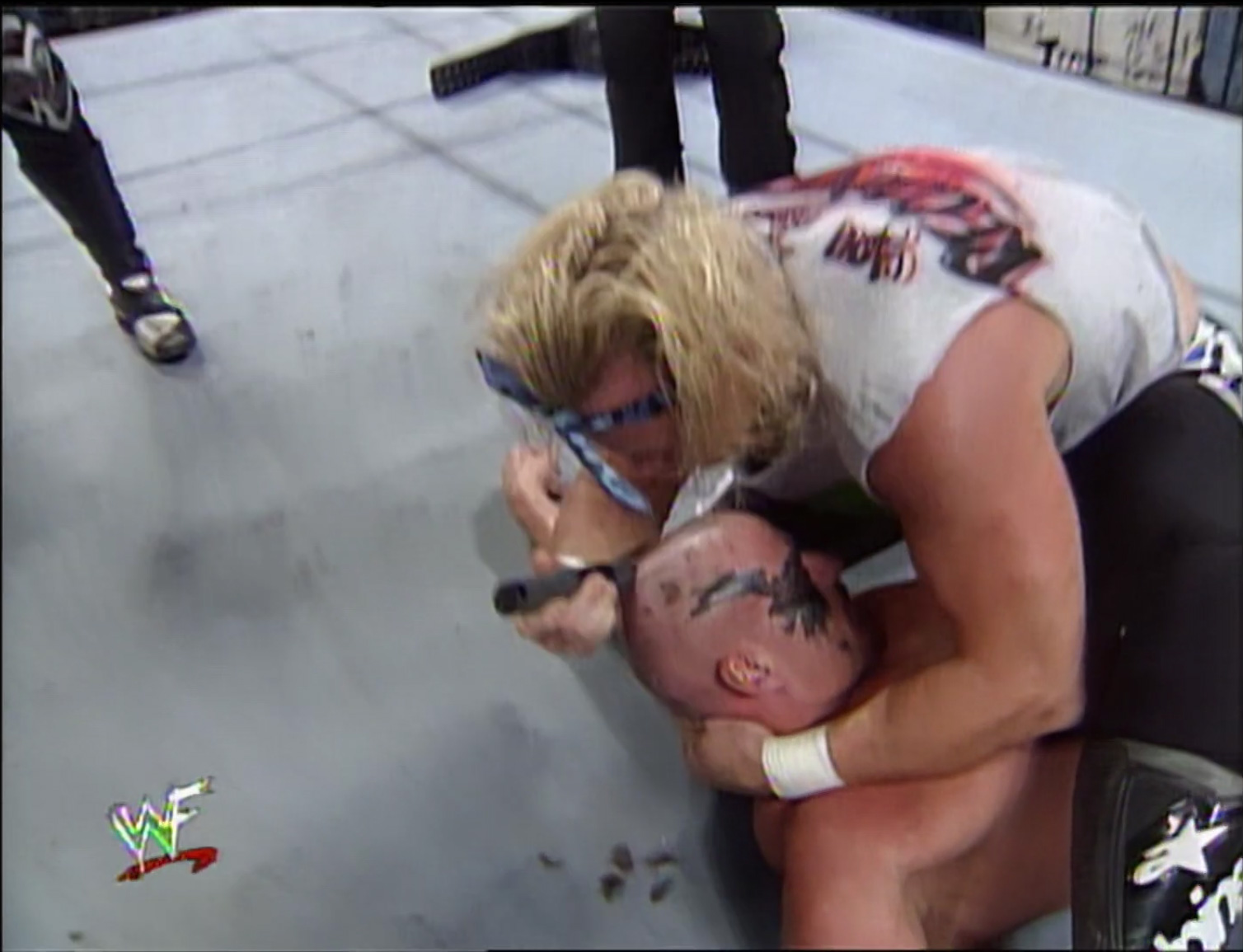 Conclusion: It’s the end of an era, folks. While this wasn’t the Road Warriors’ last match, it was a sign that things are about to change. Vince’s announcement solidifies that. Both DeGeneration-X and the New Age Outlaws are running wild in the WWF. Much like Bret’s announcement on Nitro, Owen’s statements about remaining in the WWF were tepid at best. Despite his issues with Kane, Undertaker will face Michaels at Royal Rumble ‘98 in a casket match. What could possibly happen?

Allow me to answer why those ATROCIOUS matches were on RAW is WAR. Simply put, the WWF had NO IDEA that Nitro would run three hours. Meanwhile, WCW knew what to expect and counterprogrammed successfully.

Could RAW is WAR finally overcome Nitro in the ratings?

Who won? Nope, like last week, RAW is WAR was completely obliterated by a 1.4 margin. The Sting-Hogan business has the wrestling audience firmly in WCW’s favor. To top it off, this week, RAW is WAR featured three enhancement matches. With competitive wrestling on TNT, who wants to watch enhancement matches on USA? Unless something drastic occurs, next week’s ratings battle should remain the same.

IN OTHER NEWS THIS WEEK: In both Memphis, TN and Little Rock, AR, DeGeneration-X was scheduled to main event house shows; however, due to fans’ behavior, they refused to wrestle. While a riot was teased in Memphis, one actually occurred in Little Rock. With chairs and whiskey bottles flying, police used tear gas to empty the building. Fans pounded on cars outside the building containing Flash Funk and Kama while police needed to escort DeGeneration-X from the area. According to Meltzer, thirteen arrests were made.

HOT TAKE: You’re not part of the show, guys. Whether you rush the ring or throw stuff, it’s dangerous and unnecessary. If you don’t like the heel in the ring, booing/jeering/chanting is customary while rushing/tossing objects isn’t. This isn’t just a WWF problem as both WCW and ECW also suffer from it.