What happens when Bret makes his WCW debut? Will Sting get the upper hand again on Hogan? Can Flair excite his hometown faithful in anticipation of his Starrcade ‘97 appearance? Let’s find out!

To open the show, we revisit the ending to last week’s show when Sting finally reappeared. Schiavone then announces that Bret Hart will be here.

Eric Bischoff leads the nWo through the entrance to the ring. They all search for Sting before Hennig cuts a promo on Flair. Afterward, Hogan calls Sting a “coward.”

The Outsiders call out Ray Traylor and the Steiners.

Next, we revisit Flair’s interview from last week about Bret.

Promo for the battle of the giants at Starrcade ’97 airs.

Similar to last week, the Nitro Girls dance at the broadcast table while Schiavone shills the Nitro Party contest. 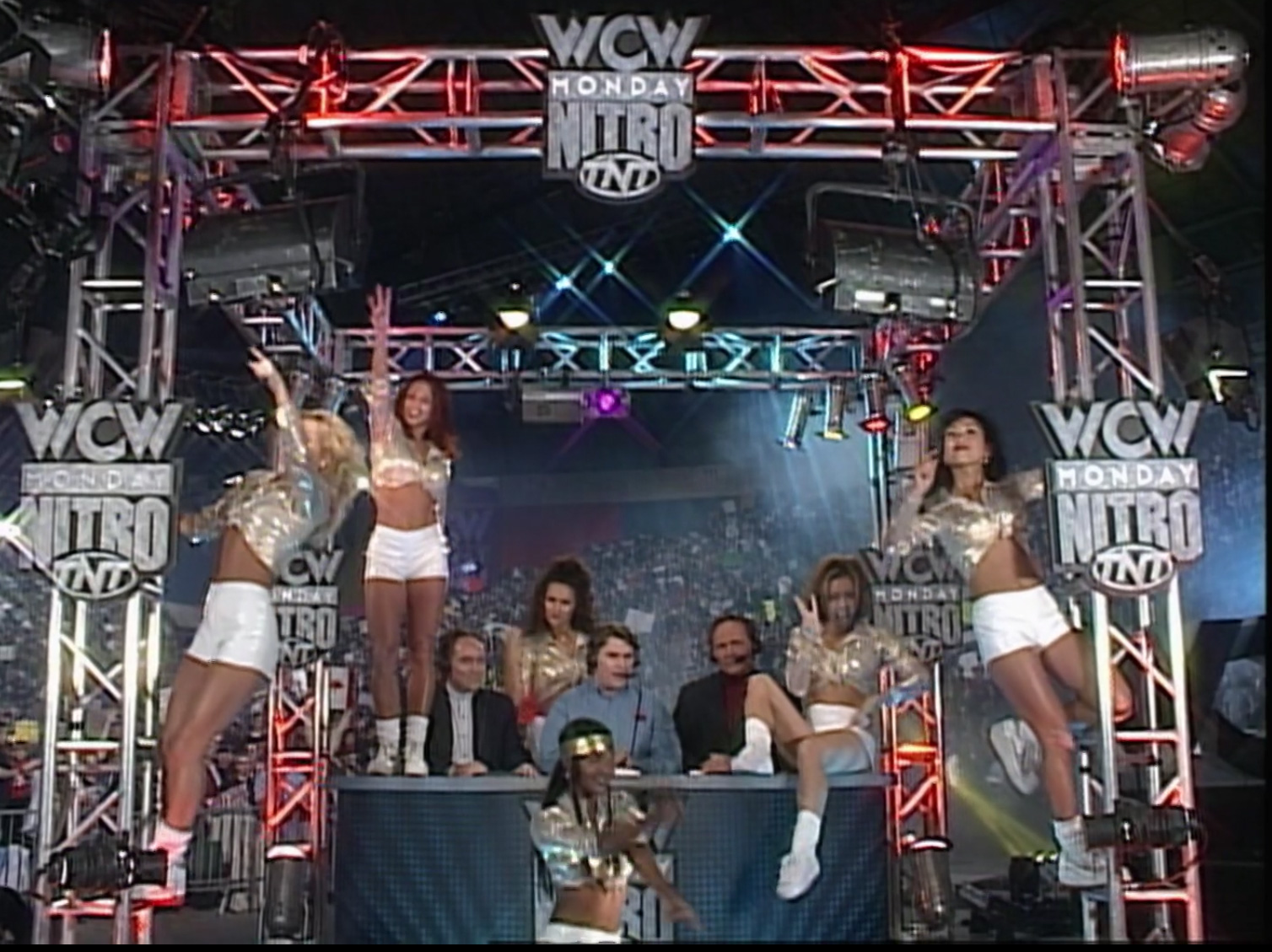 Prior to the next match, we revisit last week’s episode when Disco regained the TV title.

Summary: Solid workrate from both wrestlers, but the Charlotte faithful neither felt love nor hate for Nagata.

On WCW Saturday Night, Saturn faces Jericho. Also, Steiners square off against Faces of Fear. And last, and certainly least, Bagwell and Luger hook it up again. Do they really need that much practice for the PPV? Can’t it be at house shows? 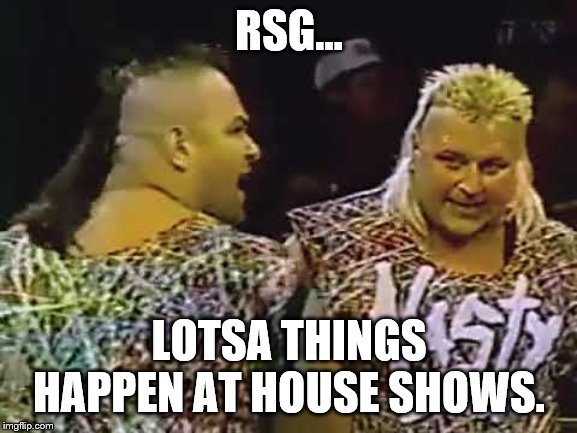 Summary: Good psychology by both wrestlers, but the distraction finish rears its ugly head again.

Repeat of the P-p-p-p-p-p-piper promo from last week airs.

Summary: Superb lucha libre match that told a great story, excited the Charlotte faithful, and had spectacular high-flying by los technicos. That should have been the main event! Bravo, gentlemen!

In the ring, “Mean” Gene Okerlund introduces Chief Snyder, Major Barnes, and Doug Dellinger. While the first two are members of the Charlotte police department, Dellinger is a retired member. Okerlund then introduces ARN ANDERSON! Much like me, the Charlotte faithful EXPLODED!

Arn provides us with the following:

“Well, Gene, I just bought a new house down the road a little ways from here, and that’s where I live. But this arena, and, moreso, between these four posts, this is my home. (Charlotte faithful cheers.) It’s the only place since I’ve been an adult that I actually felt comfortable. So, it’s good to be here if just for a little while.

“But the fact of the matter is about 90 days ago, the people of Charlotte, NC were supposed to see Ric Flair wrestle in this building. And they were robbed by Curt Hennig and the rest of the nWo. Curt Hennig, your daddy should have taught you a long time ago that when you start a fight, you should’ve finished it because this one is a long way from over...my best friend, the “Nature Boy”, is right back there. C’mon out, Naitch!”

Flair comes to the ring styling and profiling while the Charlotte faithful adorn him with praise. As Okerlund provides an opening pitch, Flair informs us that Arn might make him cry again with words such as those. He then honors the Charlotte police department on the memorial for fallen Charlotte police officers and offers them a check for $15,000 from WCW. 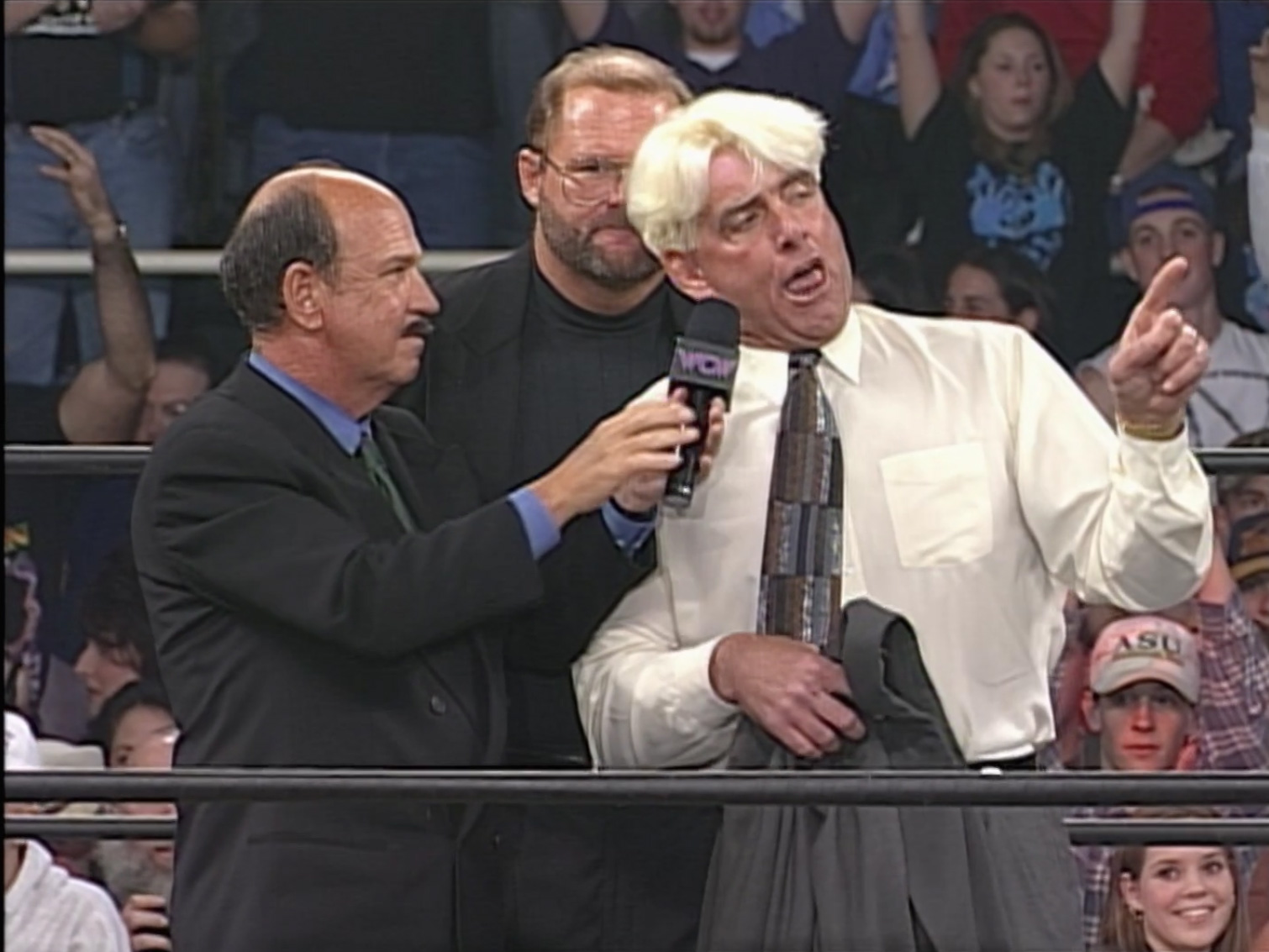 Chief Barnes mentions that 22 officers in Mecklenburg County have lost their lives and thanks WCW for its generous donation. When Okerlund turns his attention back to wrestling, Flair removes his suit jacket and cuts a promo on Hennig. He wants a rematch TONIGHT! As the show goes to break, the memorial is shown. What an awesome fifteen minutes of pro wrestling!

At the entrance, Okerlund interviews chairman of the WCW Executive Committee JJ Dillon. Before Dillon can utter a complete sentence, Bischoff reemerges to confront him. Upon insulting Dillon, Bischoff succumbs to the extremely strong “Lar-ry” chant from the Charlotte faithful. While they bellow “Bischoff sucks” at him, Bischoff wants a special stipulation added to his match against Zbyszko—punches, kicks, and knockouts being legal. Dillon agrees to the stipulation but also adds submissions to the mix. Despite being frustrated, Bischoff agrees to the new stipulations. I never knew submissions didn’t count.

Prior to the next match, Hall conducts his customary survey to a round of boos. When he asks about WCW, the Charlotte faithful EXPLODE again and jeer the nWo out of the arena. Hall tries again but fails.

Summary: Hall allowed Jericho to get some offense in, but inevitably he won.

Schiavone then introduces a Nitro Party video by Kevin Parkman and Eric Burco from Central Michigan University. With Nitro on the big screen, a theater full of Chippewas become enthralled.

We then revisit last week’s episode when Mongo defeated Barbarian but fell victim to Meng. 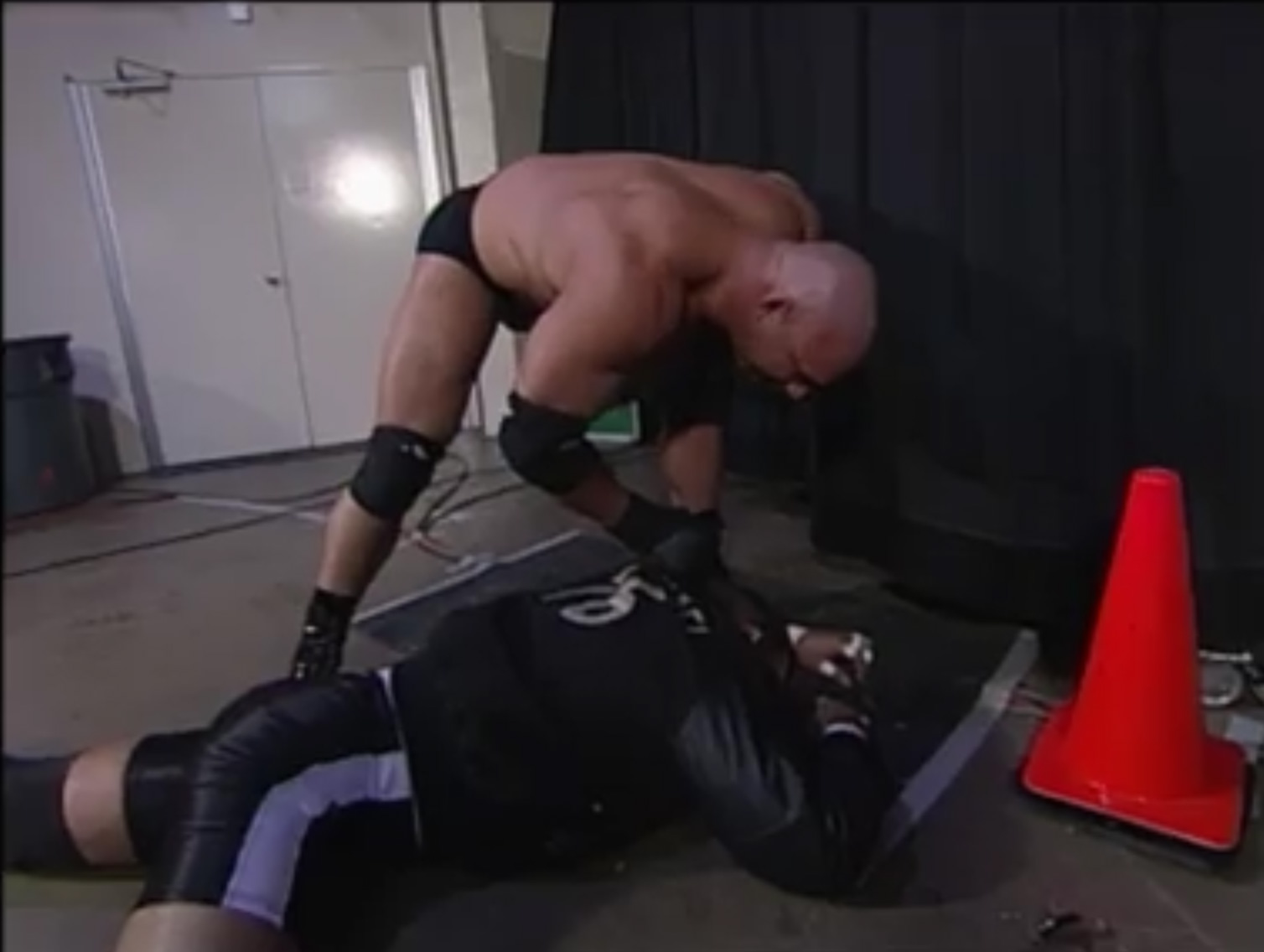 In the ring, Kimberly performs a solo before the rest of the Nitro Girls join her.

Summary: That botch by Norton sticks out like a sore thumb in this match as he mistakenly caused Rick to land on his head.

After the match, Traylor comes to the Steiners’ aid and chases the nWo away.

Summary: Booker T not only got his offense in but also took a good licking from Savage. Thanks to Elizabeth, Savage won again. 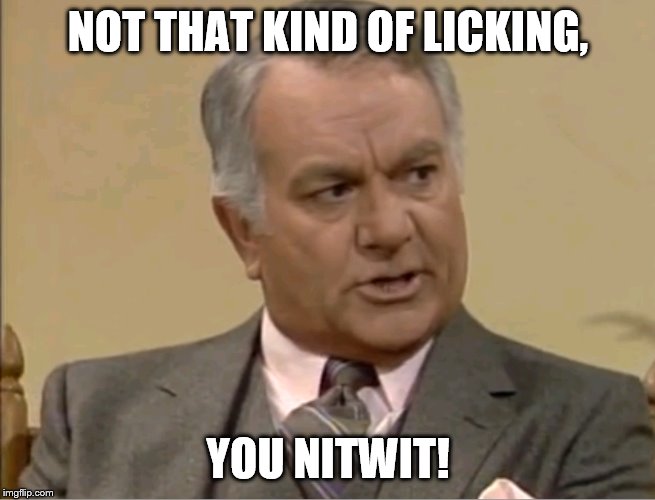 Nitro Girls dance in hats at the entrance.

Summary: Showcase match for Benoit with some token offense for Riggs.

After the match, Benoit grabs the microphone and states “Quote the Crippler nevermore.” He then cuts a promo on Raven before yelling at the Flock. Irate, Benoit leaps over the steel railing and dives onto the Flock. Initially, Benoit gets the advantage, but the numbers catch up to him. The Flock then tosses Benoit into the ring, and Saturn applies the Rings of Saturn.

In the ring, Okerlund interviews Dillon again. They discuss Bischoff, and he appears. While the Charlotte faithful chants “Lar-ry” at him again, Bischoff questions who will be the referee. Dillon mentions Randy Anderson, but Bischoff dismisses him as “fat.” OUCH! To counter, Bischoff offers Kevin Nash, but Dillon counteroffers with Scott Dickinson. Bischoff again dismisses the offer referring to Dickinson as “fatter than (Dillon).” When Dillon requests another name, Bischoff offers Syxx whom Dillon completely rejects.

Dillon then offers “one of (Bischoff’s) guys” but has to pick which one. Without question, Bischoff accepts. Dillon then introduces the man who will be the referee—Bret “Hitman” Hart! After Okerlund welcomes him, Bret’s “honored” to be a referee while Bischoff crows about “$7.5 million of Ted’s money.” Despite Bischoff’s excitement, Bret states “nobody knows better than I do to know what it’s like to get screwed over by a referee. You’re on your own, Jack.” Bischoff is beside himself to say the least. 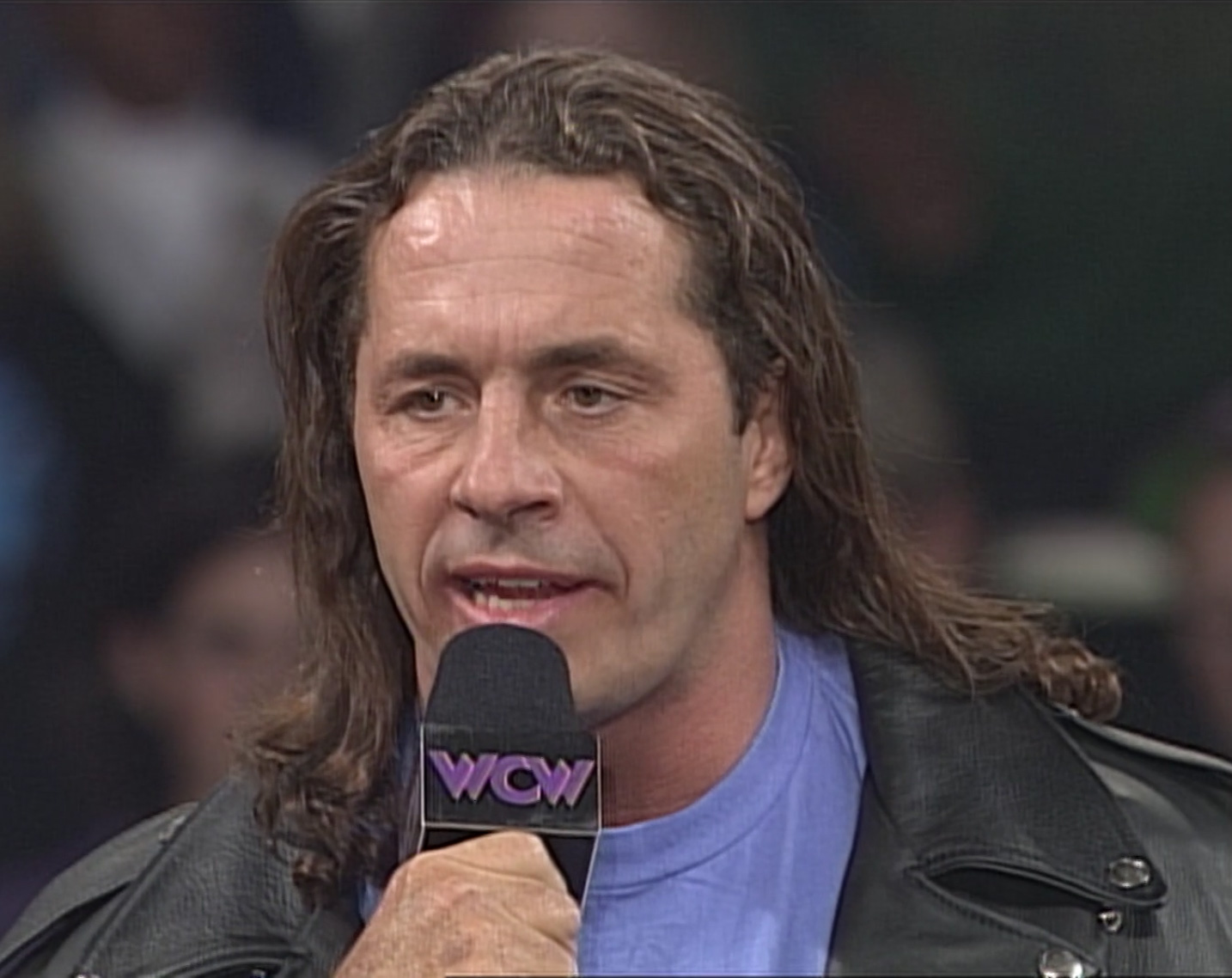 HOT TAKE: WCW has the hottest wrestler on the planet with a live microphone, and THIS is what they do with him? Considering what happens later in the show, Bret could certainly do more at the PPV.

In the ring, Okerlund interviews Luger, but Bagwell emerges. Bagwell cuts a promo on Luger, and Luger heads to the ring. When Bagwell uses his catchphrase, Luger challenges him again. Bagwell then mentions that he’s not “warmed up yet,” so Luger slaps the taste out of his mouth and the sunglasses off his head.

Summary: More storyline than match as the Bagwell-Luger story continues to run in nonsensical fashion.

Prior to the main event, Hennig challenges “anybody in the building” and runs down Flair. He then touts his title before heading to commercial.

After the bell rang, Flair uses his trick knee to foil Hall. Savage and Bagwell join the fray but also receive trips down SOUTH. The nWo then pummels Flair while Henning BRAINS him with the US title belt. As Hennig uses an ankle crusher on Flair, he hooks a figure-four leg lock.

Abruptly, DDP hits the ring to save Flair’s bacon. The Steiners and Luger also arrive to dig into some nWo meat as DDP beats up Hennig. Flair appears to be seriously injured.

While the Steiners and Luger carry Flair backstage, DDP grabs the microphone and challenges Hennig. Astonishingly, more fans storm the ring, but referee Randy Anderson exercises his authority and hammers a guy out of the ring. In addition, ring announcer David Penzer pulls another fan from the ring.

Hogan leads the nWo to the ring as Bischoff carries the WCW World title belt. In the meantime, DDP exits through the crowd to save himself. While Hogan runs down Sting, the lights go out just like last week.

Via spotlight, Sting appears in the rafters. When the lights reillumine, WCW Security fiercely removes another fan from ringside. Hogan again calls Sting a “coward,” and the lights go out again. 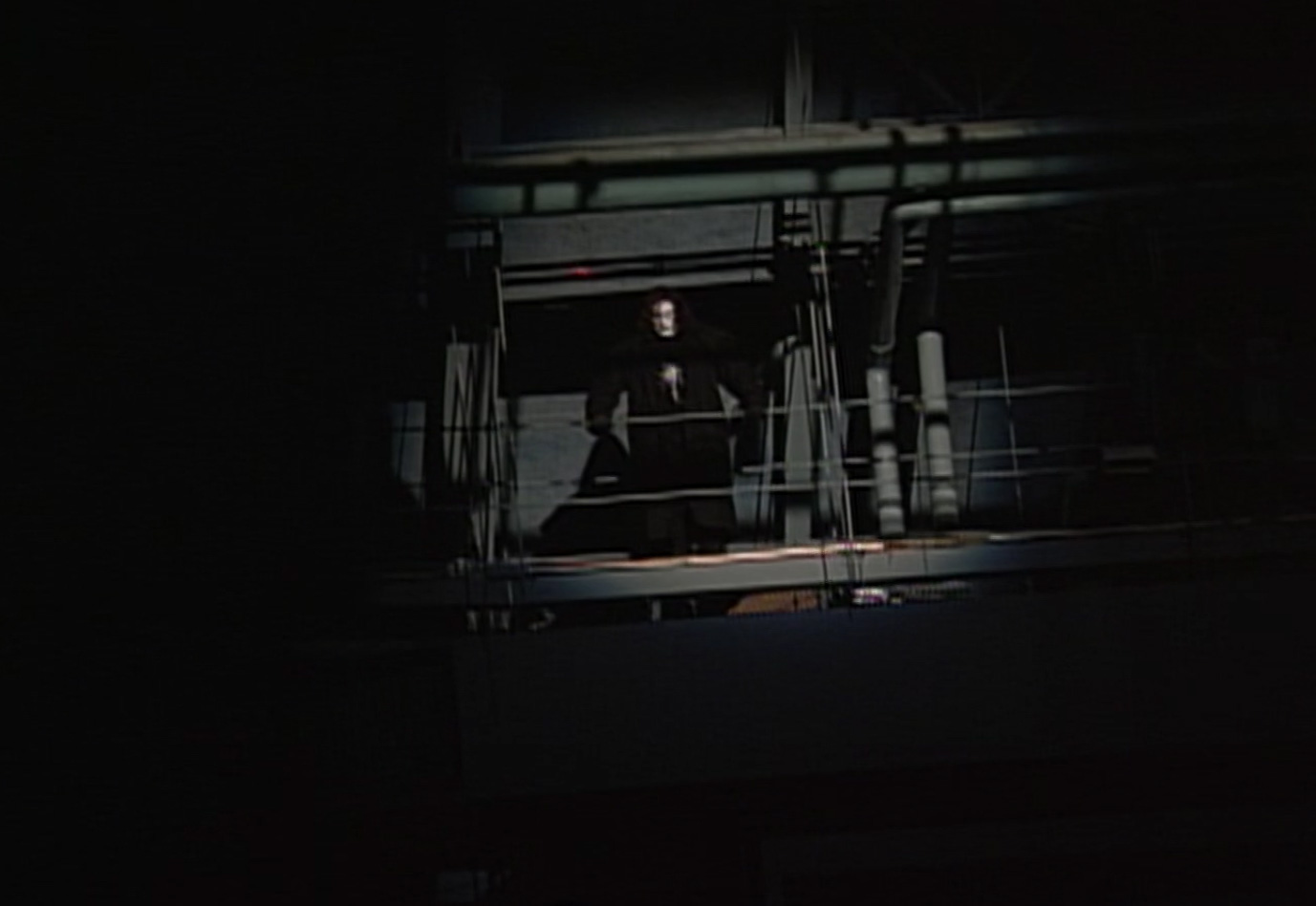 The lights return, and Sting stands atop the entrance like he’s stalking prey. A terrified Hogan cries in fear while Sting climbs down to make his way to the ring. As you’d expect, the show ends. 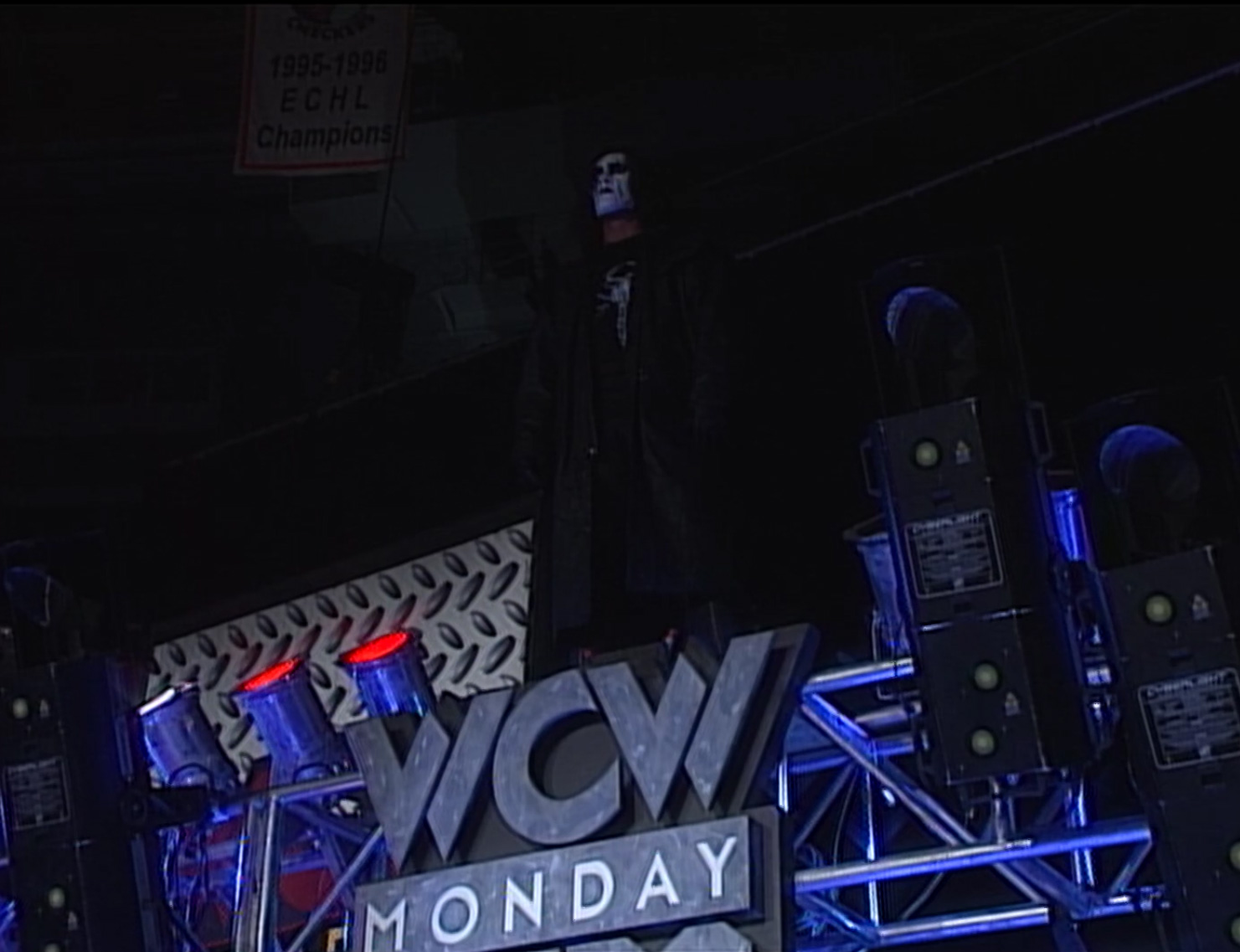 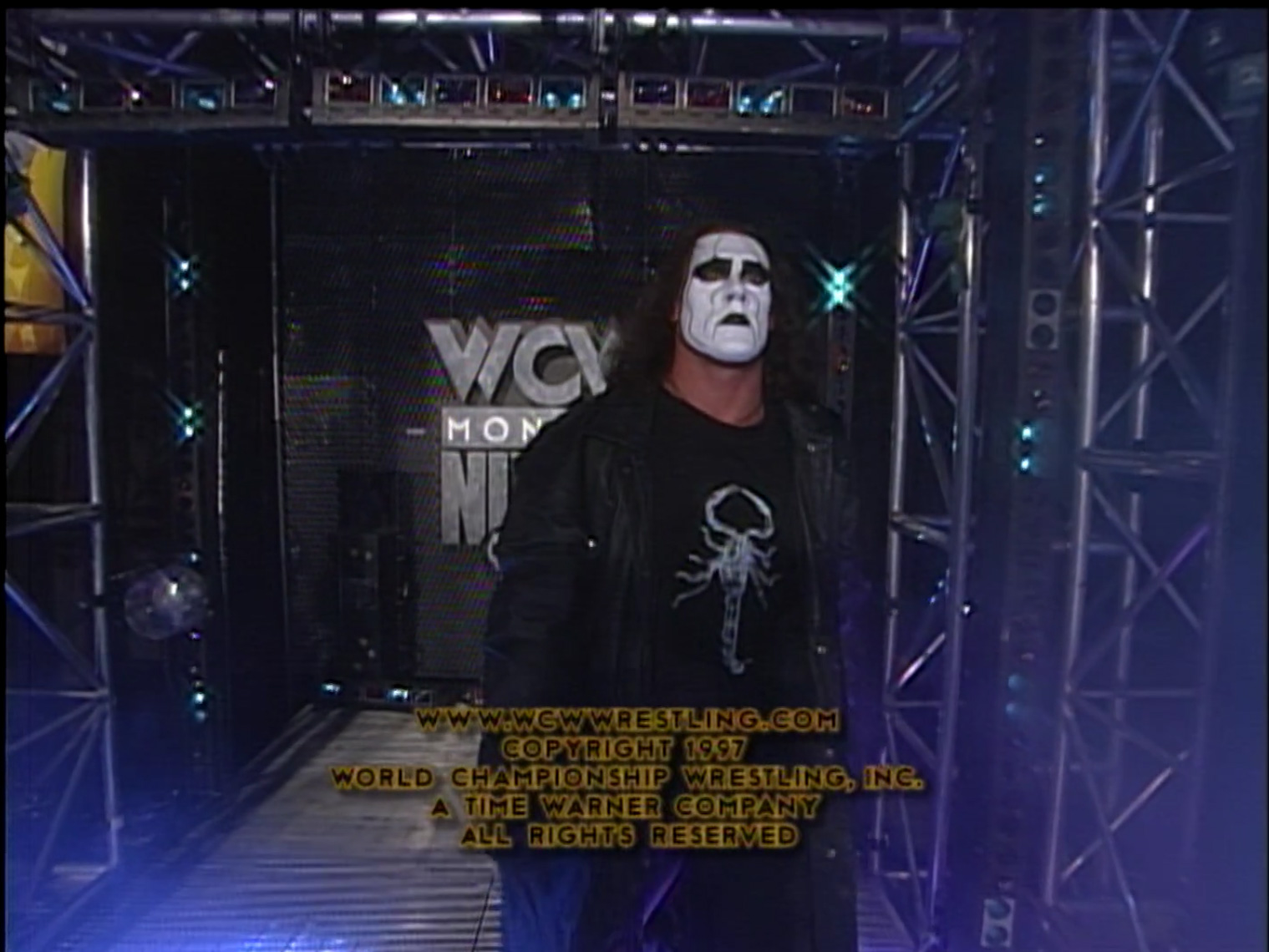 Conclusion: An incredible show that continues to build up Starrcade ‘97. Unfortunately, Flair’s ankle isn’t ready for primetime, so I believe DDP will take his place. As the Bagwell-Luger nonsense will continue into the PPV, Bret becomes the special guest referee for the rights to Nitro match. He should have been able to lace up his boots for the biggest show of the year.

On the other hand, the two highlights of the show happened consecutively. The lucha libre tag match was phenomenal, and the Anderson-Flair interview made this show glorious. To top it off, Charlotte truly hated the nWo, and their disapproval during Hall’s survey cemented it.