Can DDP defeat Hennig and win the US title? What is Bischoff belligerent about? Let's find out!

In the ring, “Mean” Gene Okerlund interviews Eric Bischoff. While Bischoff makes his entrance, a fan held up a ‘Hogan fears my granny” sign. I wonder if that could be foreshadowing. Regardless, the Knoxville faithful LOUDLY chants “Lar-ry” at Bischoff as he backtracks on the match scheduled for the PPV. Instead, he will face Zbyszko only if he offers WCW Monday Nitro to the nWo should Zbyszko lose. Since Zbyszko doesn’t have the authority to do it, Bischoff believes there will be no match.

Summary: Good chemistry between these two cruiserweights, yet Mysterio survived the onslaught to achieve victory.

Summary: Heel miscommunication cost Wrath dearly. Some would consider this an upset.

"Hollywood” Hogan and Bischoff come to the ring while the WWE Network overdubs Jimi Hendrix’s “Voodoo Child.” As you’d expect, Hogan cuts a promo on Sting exhibiting his disdain for Sting masks. Upon exiting the ring, Hogan mistakenly gets in the face of “Bouncing” Beulah Boshers—a former wrestling promoter from the 1950s and rabid fan. To say Hogan got the worst of the exchange would be putting it mildly. 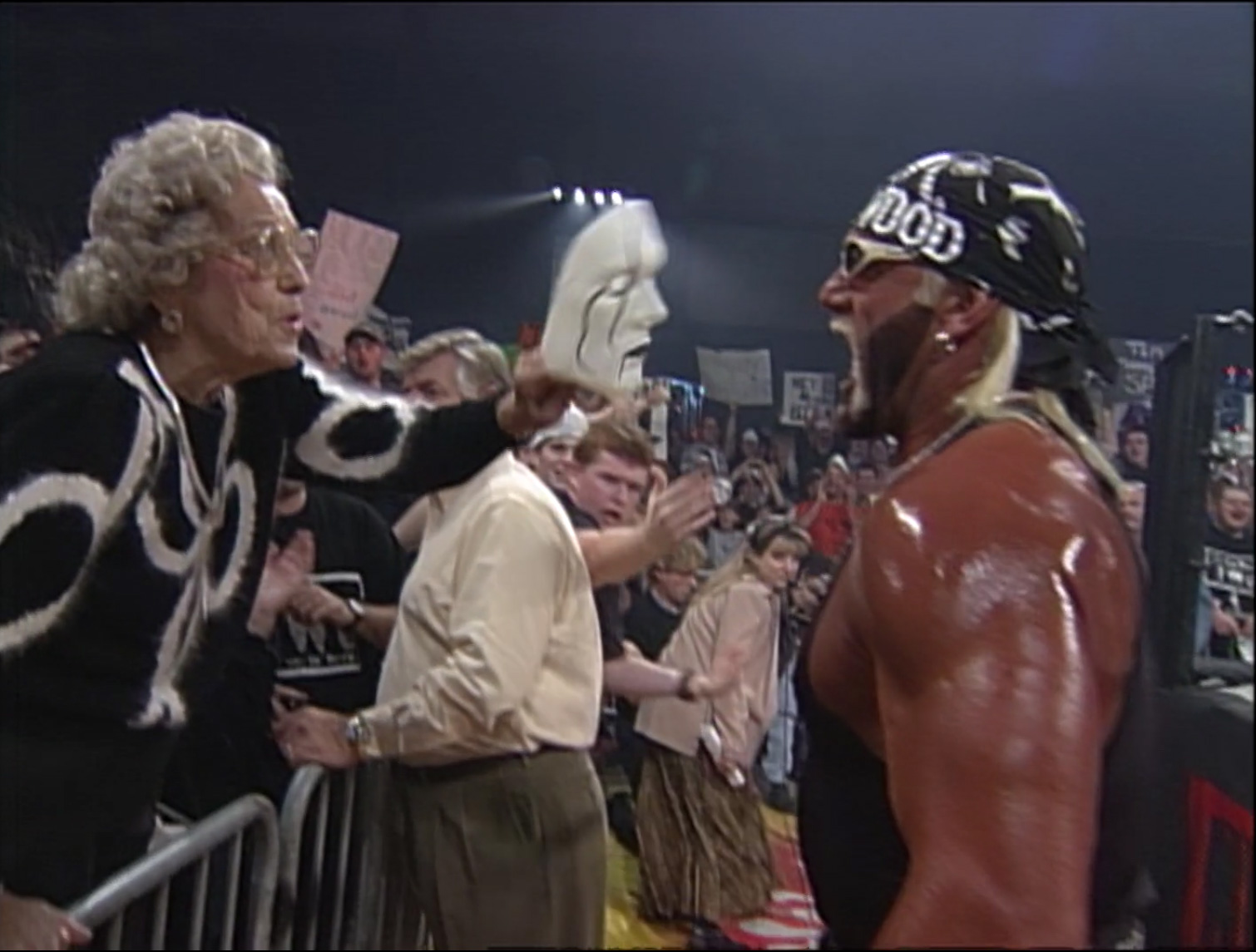 Summary: Another upset as Iaukea earned his second victory in consecutive weeks on Nitro.

Following a commercial break, the Nitro Girls dance at the entrance in silver. Schiavone then shills the Nitro Party contest.

Prior to the next match, Hall and Nash come to the ring, and Hall performs his survey. In case you didn’t know, Knoxville is WCW country. Nash then cuts a promo on Giant and dismisses WCW with a Lee Harvey Oswald reference. To finish the promo, he refers to Disco Inferno as “the dude that lost to the chick.”

Summary: Without question, this was a showcase match for Hall. Heaven knows why this match was booked other than the continued humiliation of Disco.

After the match, Hall and Nash celebrate like they just won the Super Bowl. What a pair of goofballs.

Following a commercial break, the Nitro Girls dance at the entrance in black and silver.

At the entrance, Okerlund interviews Chairman of the Executive Committee--James J. Dillon. Upon deriding Bischoff, Dillon affirms that Zbyszko cannot offer Nitro as collateral for a match. Instead, Dillon decrees that HE has the authority to offer Nitro. Immediately, an angry Bischoff emerges and dismisses Dillon’s authority. Dillon then refers to him as a “little toad” causing Bischoff to become speechless.

Summary: Dragon demonstrated his ability to work lucha libra-style here and got the victory. Meanwhile, the broadcast team gloated about Bischoff’s pending loss at Starrcade ‘97.

Following a commercial break, Schiavone announces Paulson Webber from Greenfield, WI as the winner of a Nitro party pack. Paulson’s video then airs, and hijinks ensue.

Prior to the next match, Raven refuses to wrestle and substitutes Kidman.

Summary: Well, Kidman’s spleen is intact, but I’m certain he still feels the pain from Benoit’s chops to this day.

After the match, the Flock tries to ambush Benoit to no avail. In fact, Benoit hits a German suplex on Saturn knocking the World TV title belt off him. Hammer then distracts Benoit enough so that Raven can DDT Benoit. While Hammer distracts referee Mickey Jay, Saturn applies the Rings of Saturn upon Benoit. So...Benoit stays strong, and the Flock gets heat.

Following a commercial break, the Nitro Girls dance in the aisle in black and white outfits.

Summary: Another DQ finish in an nWo match to “protect” Bagwell.

After the match, Luger sends Vincent into Bagwell knocking him to the floor. He then hooks Vincent in a Torture Rack, drops him, and applies it to Bagwell much to the delight of the Knoxville faithful.

THE FOLLOWING ANNOUCEMENT HAS BEEN PAID FOR BY THE NEW WORLD ORDER:

DDP destruction care of the nWo at its finest.

THE PRECEDING ANNOUNCEMENT HAS BEEN PAID FOR BY THE NEW ORDER.

Nitro is sponsored by Nintendo 64.

Match 9 for the WCW US title: Curt Hennig (champion) versus Diamond Dallas Page

Summary: Another “almost” for DDP. Hopefully in the near future, he can dethrone Hennig to become US champion.

After the match, Hogan approaches the ring with Bischoff. While the Knoxville faithful chant “we want Sting,” Hogan delivers a Diamond Cutter to DDP. The nWo then puts a Sting mask on DDP, and Hogan hits a second Diamond Cutter this time on the WCW World title belt. He then exits the ring to confront Bowers, but Bagwell and Vincent restrain him. HA! 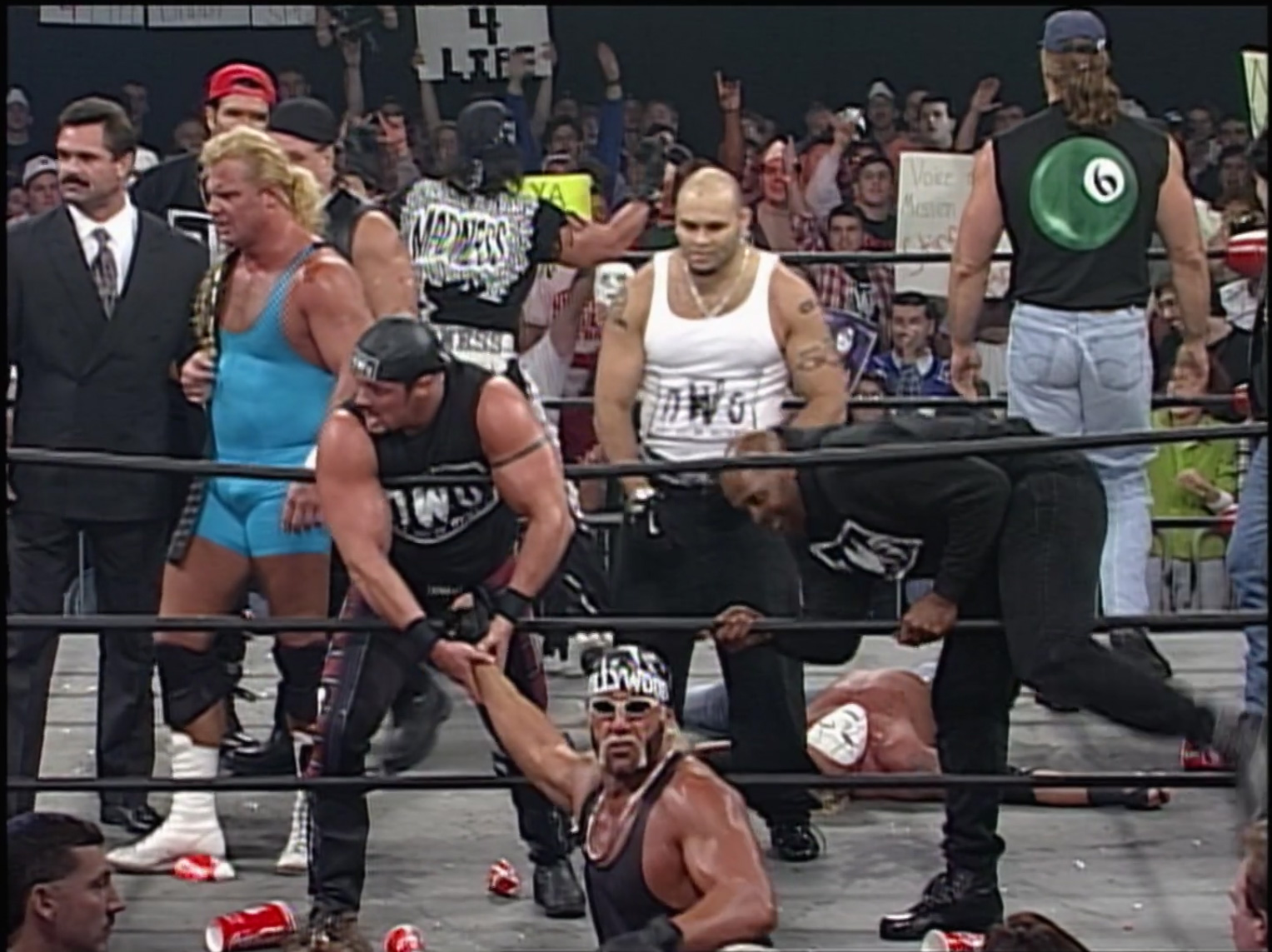 Conclusion: Plenty of wrestling and some of it actually good. However, I’ve got a major beef.

While WCW can boast the higher-profile talent and showcase them on Nitro, they completely ignore the competition and wager the bragging rights of a TV show on a match? I understand it was intended to help usher in the beginning of Thunder, but its alleged importance is weighted too heavily by WCW to the casual fan in this case. And Zbyszko versus Bischoff? Now that’s just insulting.

Otherwise, besides the hype for the Zbyszko/Bischoff match, the Benoit-Kidman match stood out on a rather lackluster episode. Don’t mess with Granny at a wrestling show! What’s on RAW is WAR?