With Bret gone, how will the WWF recover? What’s next for **cough**WWF champion**cough** Michaels? Who’s Austin’s next target? Let’s find out!

To begin the show, the DeGeneration-X theme hits, and “Ravishing” Rick Rude heads to the ring. The Ottawa faithful boos him out of the building. As he introduces Michaels, a LOUD “bull-shit” chant emanates from the Ottawa faithful. The **cough**WWF champion**cough** emerges with HHH and Chyna.

Next, a LOUD “We Want Bret” chant begins while Rude congratulates Michaels. Shunning political correctness, Michaels states that he “beat Bret...in his home country in his own finishing hold.” Following that, he mentions that the WWF wasn’t big enough for the both of them, and “ran (Bret) down south with the rest of those dinosaurs.”

Upon threatening Bret with violence from his “friends” in WCW, he chastises Bret, Hulk Hogan, and Randy Savage for not having “God-given, pure, natural talent.” What an ego on this sumbitch. As the chant from the Ottawa faithful changes to reflect Michaels’ alleged bedroom habits, Michaels “would never beat up a 52-year-old man.” By the way, Bret, despite Michaels’ saying to the contrary, believed from this moment forward that Michaels was involved in the screwjob, and he would be proven correct.

Suddenly, Ken Shamrock emerges and heads to the ring. Michaels insults his intelligence, and Shamrock calls DeGeneration-X a “disgrace.” He then questions Chyna’s gender in a very derogatory manner. Afterward, he challenges Michaels “right now” and calls Rude “an old man.” When Michaels steals the microphone, he defends Chyna and Rude. He then defends HHH while Commissioner Slaughter walks to the ring.

Slaughter then declares a WWF title match between Michaels and Shamrock. When Michaels claims he’s worn down from his match last night, Slaughter points out that he won’t face Shamrock tonight. In fact, HHH will, and Slaughter will be at ringside. DeGeneration-X is banned from ringside. 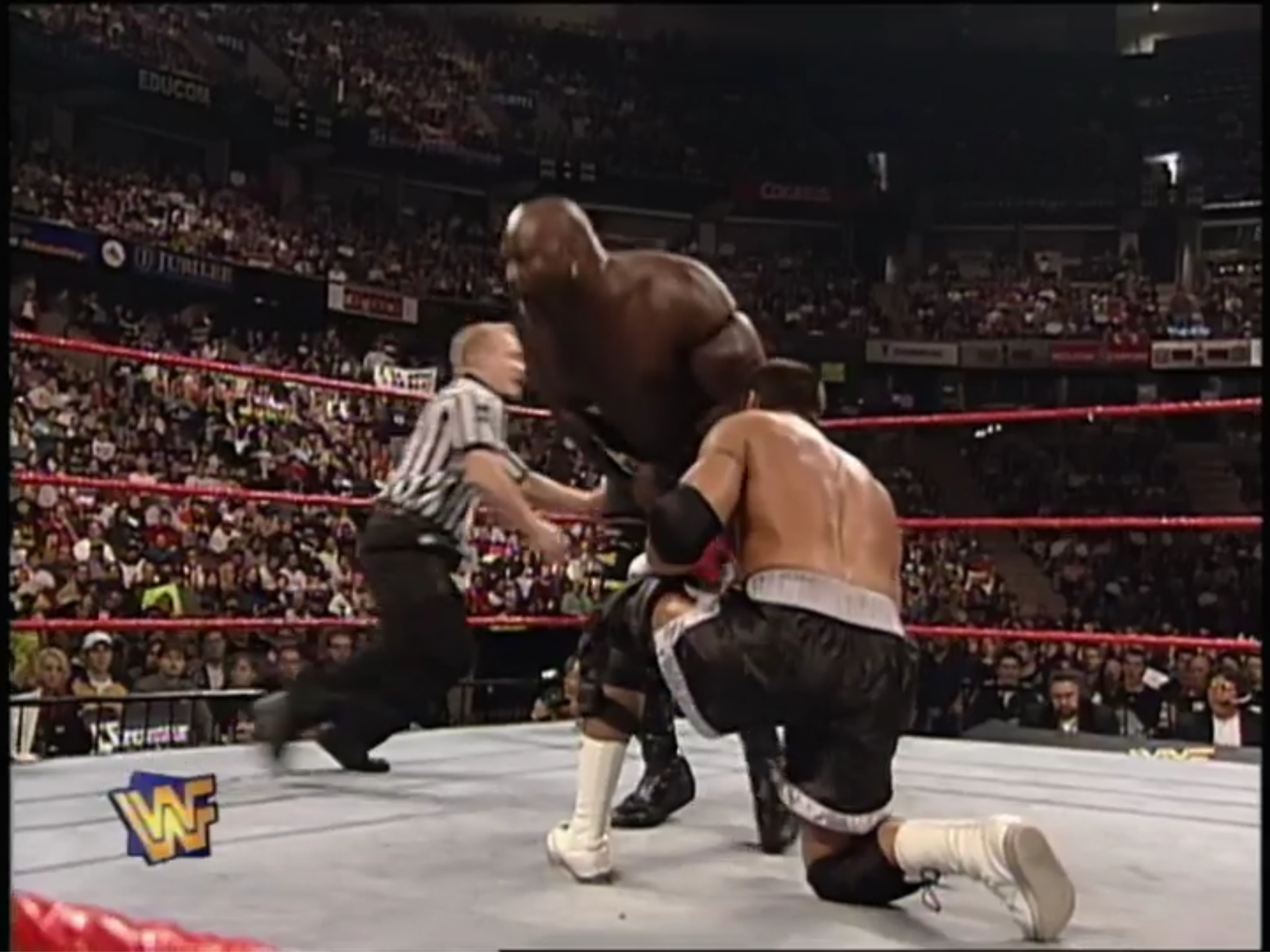 Summary: G-A-R-B-A-G-E. The only thing the Ottawa faithful were interested in was Sable with her “38EE” or so the sign read.

After the match, Mero hoists Johnson up and delivers the TKO albeit barely.

Butterbean was shown at ringside.

RAW is WAR is sponsored by FootAction USA and Castrol.

Summary: Solid high-flying and workrate by both guys, but the Ottawa faithful couldn’t care less. Storm has a future in the business.

After the match, Michinoku mounts the top turnbuckle and hits his patented tope onto Christopher on the ramp. They then brawl until Christopher hightails it.

We then revisit last week’s episode when Goldust dumped Terri.

In the ring, JR interviews...oh my dear God...Goldust. First, Goldust disses his “fat ass old man.” Next, he describes the “hell” his marriage was. We then revisit stills from the PPV until Vader interrupts. As he yells “nobody walks out on Vader,” Vader summarizes their elongated history and wants to know why he stuffed him at the PPV. Goldust offers a crappy excuse, but Vader doesn’t buy it. Frustrated, Vader powerbombs him. 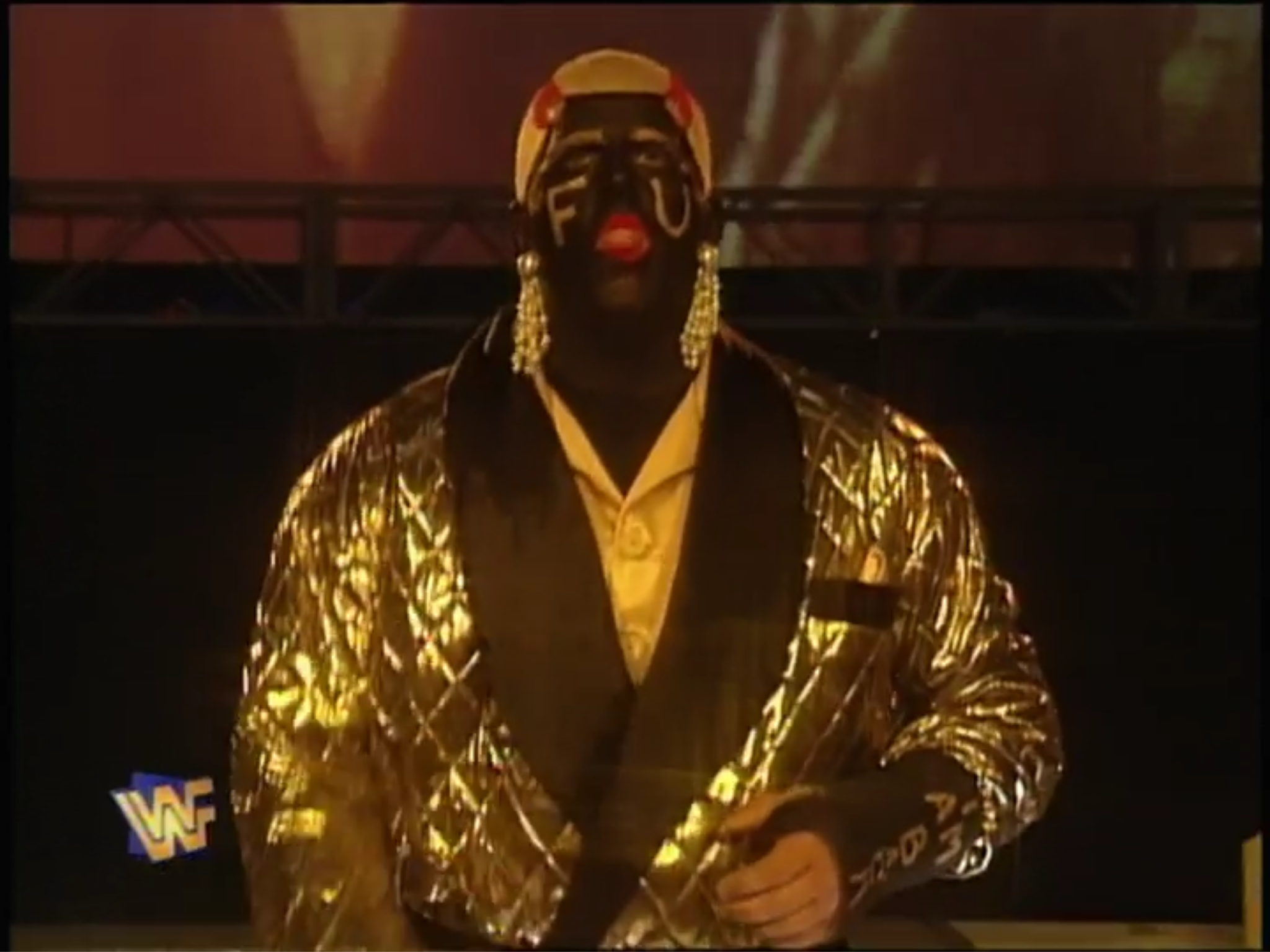 Back in the locker room, Michael Cole tries to explain the chaos, but Blackjack Bradshaw manhandles him. Apparently, Blackjack Windham was attacked. In actuality, Windham was among the group that walked out on this show in protest to the screwjob.

Summary: Meaningless tag match. Move along. Nothing to see here.

Stills from the Intercontinental title match from last night are shown.

Austin emerges while carrying the Intercontinental title belt, and Cole interviews him in the ring. While Austin emphatically states he’s “back,” Rocky Maivia interrupts him. Maivia crows about his previous days as Intercontinental champion and challenges Austin. In the meantime, the Ottawa faithful chants “Rock-y sucks.”

Austin, in his own unique style, challenges Maivia to two things.

He then accepts the challenge and informs Maivia that he sucks because Stone Cold said so. In a first-of-many, Maivia’s facial expression is priceless. 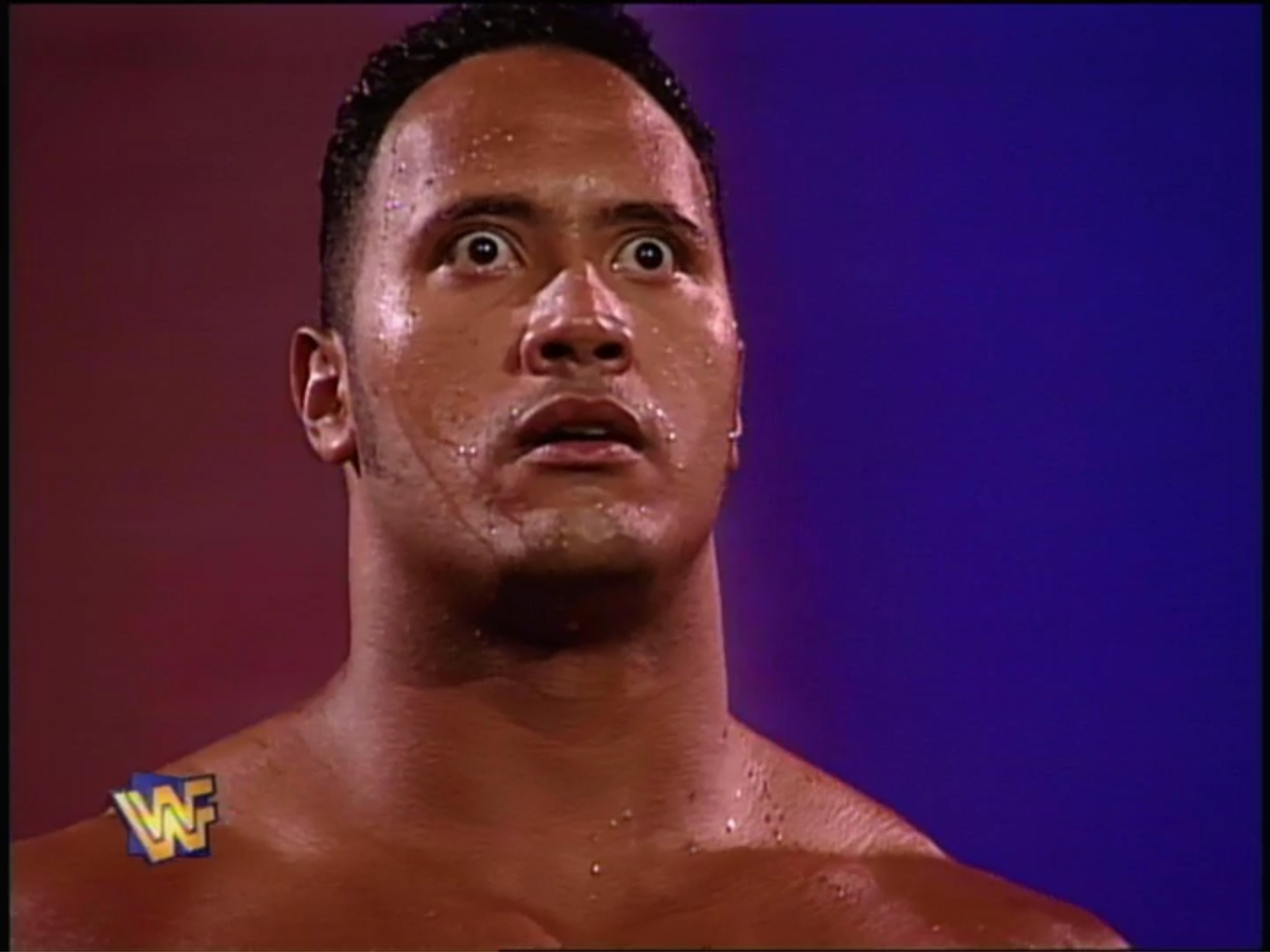 At ringside, JR interviews Steve Blackman, but Miguel Perez interrupts him. Los Boricuas then triple-team Blackman, but the tide turns when it continues into the ring.

Summary: Bradshaw may know how to kick ass, but his opposition is making a name for itself.

DeGeneration-X will be LIVE on PPV on 12/7. Order NOW!

In part two of a pre-recorded interview, Jeff Jarrett believes the WWF got him “at a bargain.” We then see vintage footage of Jarrett from the USWA. Afterward, Jarrett wants to become WWF champion. When JR mentions Bret, Jarrett states he’s never beaten Bret but feels he’s superior. JR then asks for a prediction for the PPV main event, and Jarrett answers “I’ll be surprised if Shawn doesn’t win.” Obviously, this was recorded prior to the PPV.

At ringside, Cole interviews Butterbean. Suddenly, Mero and Sable interrupt him, and Mero questions his opponents (e.g. truck drivers, unemployed steel workers). He then threatens Butterbean if he does anything to Sable and calls Butterbean a “nobody.” When Mero leaves, Butterbean calls him an “idiot.” Name-calling, really?

Match 5: Undertaker versus Kama (w/o the Nation of Domination)

Under a red light, Kane and Bearer appear at the entrance, and Bearer threatens Undertaker with “suffering.” Who is he, Pinhead? Regardless, Bearer challenges him one-on-one, but Undertaker “will never fight” Kane.

Prior to the main event, we revisit last week’s episode when Shamrock made Michaels tap out, but Chyna’s distraction coupled with Rude’s interference led to a Pedigree by HHH. 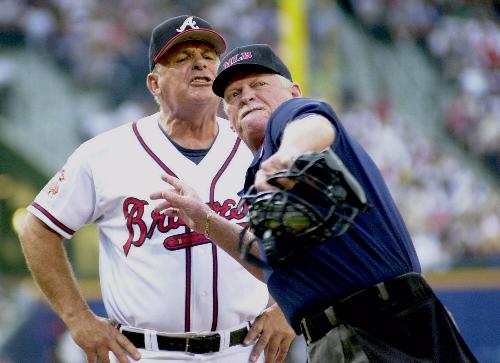 Summary: Fodder to fuel the upcoming Michaels-Shamrock and Slaughter-HHH matches at the next PPV.

Conclusion: As expected, Bret, Owen, Davey Boy Smith, and Jim Neidhart boycotted RAW. Unexpectedly, both Mick Foley and Barry Windham also boycotted this episode. Bret notified Foley not to ruin his wrestling career and to rejoin the WWF. What will happen with the rest of the wrestling brethren?

Can RAW is WAR finally overcome Nitro in the ratings?

Who won? Nope, despite all of the controversy from the PPV, RAW is WAR lost by a full ratings point. I truly believe that the WWF will have to create a character and angle that will capture the wrestling audience’s attention to steal viewers from Nitro. Until they do, WCW will maintain the #1 wrestling program on Monday nights.