Is there a new addition to WCW? Can Eddie regain the Cruiserweight title? Why is Flair facing Luger? Let’s find out!

To open the show, Hogan and Bischoff emerge through the entrance waving Canadian flags. The entire nWo comes to the ring, and Bischoff has two surprises for us. To start, he re-introduces Kevin Nash. Syxx wheels him to the ring, yet Nash leaps to his feet to celebrate with his homies. After mimicking Lou Gehrig, Nash cuts a promo on Giant.

Suddenly, a LOUD “We Want Sting” chant emanates from the Memphis faithful while Nash challenges Giant for a match at the PPV. Next, Bischoff introduces the newest member of the nWo including the post-PPV fight with Vince McMahon—Bret “Hitman” Hart. Hogan jokes that Bret “passed the initiation.” Since Bret’s contract doesn’t expire until 12/1, he doesn’t appear. However, Bischoff distributes lyrics while the nWo butchers “O Canada.”

Prior to the opening match, we revisit last week’s episode when Luger and Flair went face-to-face.

At the entrance, “Mean” Gene Okerlund shills the hotline with plenty of Montreal rumors.

Summary: Zero chemistry between these teams, and the match along with the finish felt rushed.

Nitro Girls dance in white and denim at the entrance.

We then revisit last week’s episode when Saturn won the World TV title.

After the match, Kidman tossed his beverage at Disco. Subsequently, Disco yanks him out of the front row and applies the Chartbuster. Sick Boy then CREAMS Disco, and Saturn threatens to end Disco’s career. Suddenly, Scotty Riggs comes to Disco’s defense and stares down Raven. Riggs backs away from him instead of fighting. I smell something cult-like.

On WCW Saturday Night, we have a battle of Brits as Regal faces “Gentleman” Chris Adams. Also, Public Enemy squares off against the Faces of Fear. Get all this!

Summary: Interesting dynamic as bringing Hart out for Barbarian caused the Memphis faithful to boo Glacier. Decent finish to a rather mediocre match.

After the match, Meng enters the ring and applies the Tongan death grip to Glacier.

After a commercial break, Raven enters the ring and grabs the microphone. Upon sitting in the corner, Raven apologizes to Riggs and tells the fans to “blame yourselves.” If you can believe it, Van Hammer stands next to Raven looking like he’s on fifteen different varieties of Quaaludes. 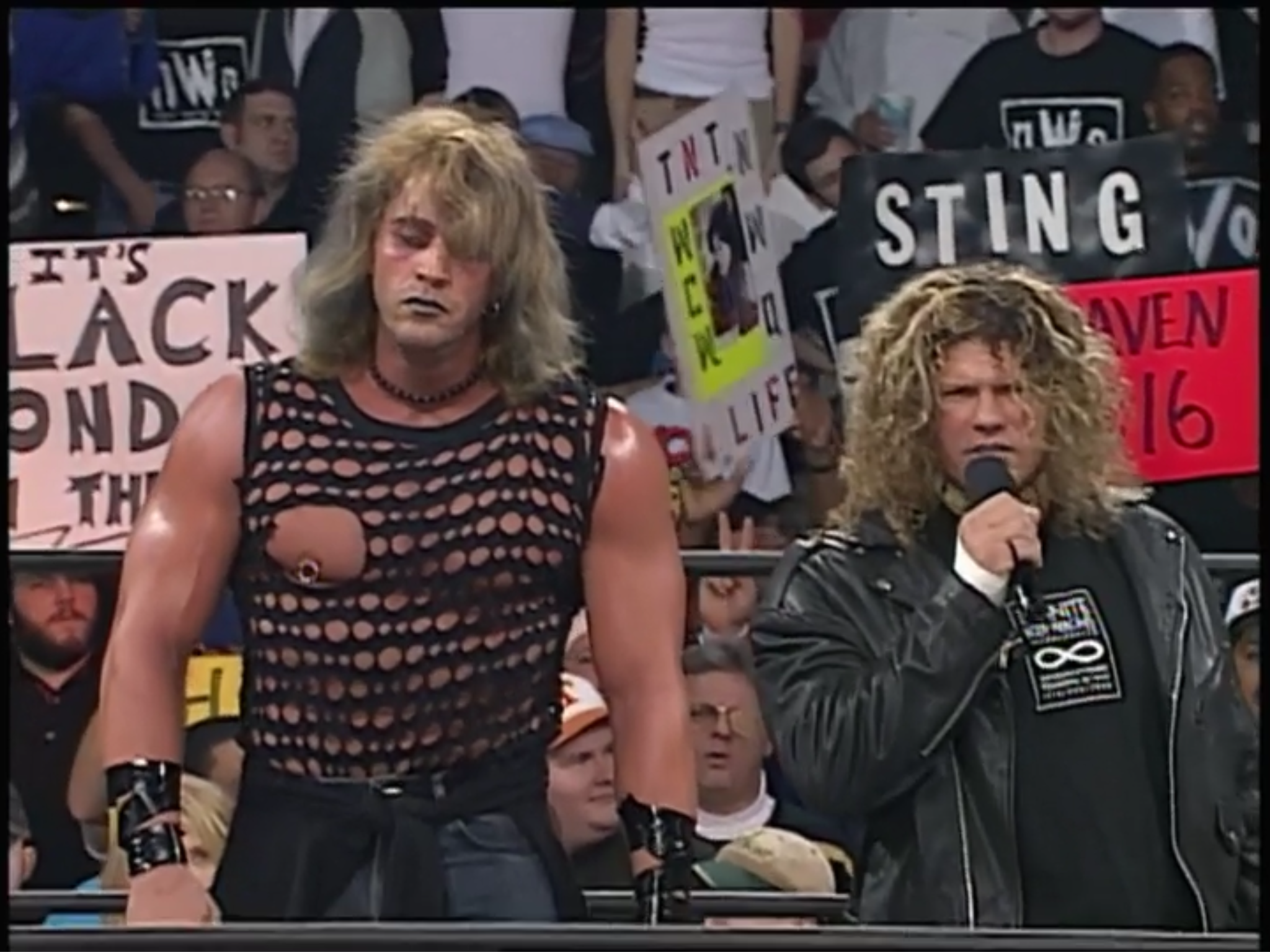 Summary: Nagata must be hanging out in Glacier’s freezer, ‘cuz he’s got NO heat. Great workrate from these guys though.

To begin the second hour, Bischoff and Hogan head to the ring, and Bischoff is PISSED about Sting’s movie The Real Reason (Men Commit Crimes). Hogan then refers to Sting as a “Hollywood wannabe,” crumples up the movie poster, and challenges Sting for TONIGHT. Will it happen?

Summary: More time! I want these guys to have more time to showcase how great a match between them really could be.

After the match, Kidman charges in only to get chopped down by Benoit. Sick Boy suffers the same fate, and Benoit suplexes Kidman over the top rope to the floor. That did NOT look safe. Next, he launches Sick Boy over the top rope to the floor. In the process, Sick Boy tastes the steel railing. It must taste like the Madison Avenue burger at Huey’s. He then hooks the Crippler Crossface on Saturn until Hammer gets up on the apron. Suddenly, Fit Finlay hits the ring and clotheslines the bejeezus out of Benoit. He then tombstones Benoit, and the Flock ambushes the downed Benoit.

Nitro Girls dance in the ring with top hats while Schiavone shills the Nitro Party contest.

At the entrance, Okerlund interviews Flair who uncorks a “Meeeeeeeeeeeeeeeean Wooooooooooo Gene.” He’s ready for Hennig, the nWo, and the PPV. 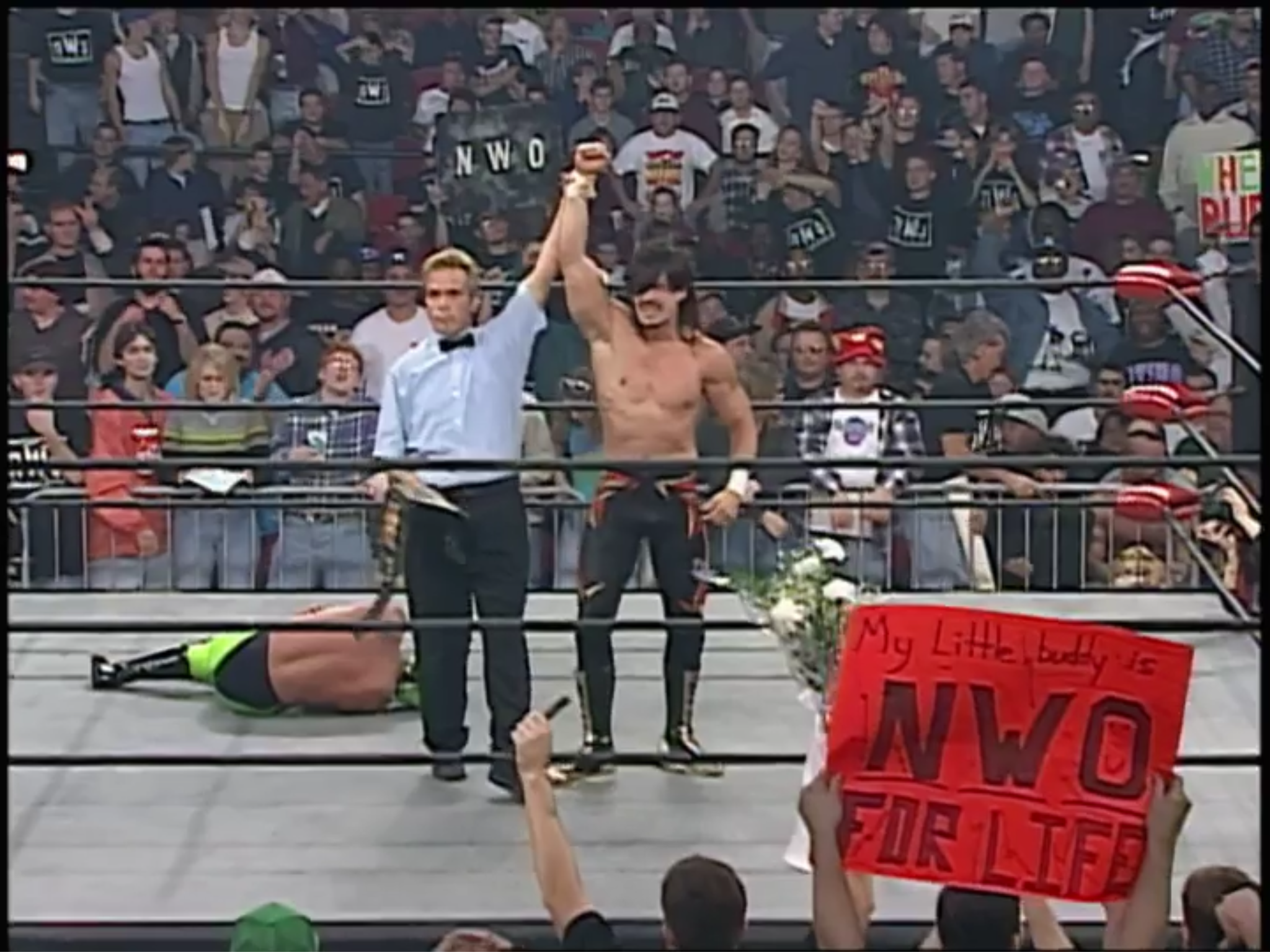 Summary: Nowhere near as good as their match at the PPV, but these guys shine no matter how few minutes you give them.

After the match, Dean Malenko comes to the ring and stands face-to-face with Eddie. I guess Malenko wants a shot at the Cruiserweight title.

Brandon Lowry from the University of Tennessee-Chattanooga won a Nitro Party pack, and a video of his party is shown.

Summary: Formulaic Savage match where he takes a shit-kicking until the tide is turned.

After the match, Savage mounts the top turnbuckle again and hits another big elbow. He then did it a third time and BELTS Silverman for trying to stop him. To add insult to injury, Elizabeth spray-paints Traylor while Savage delivers big elbow #4. Schiavone then states that Silverman reverses the decision, and Traylor wins by DQ.

Nitro Girls dance in silver at the entrance.

Match 8 for the WCW US title: Curt Hennig (champion) versus Diamond Dallas Page

Summary: Memphis was ready for a fight between these two, but Hennig’s inner heel cost him the W.

Summary: The match had glimpses of former encounters, but did you really expect a clean finish?

After the match, Luger presses Flair overhead and tosses him at an incoming Hennig. Flair and Hennig then brawl, and Flair makes Hennig taste the steel railing. It must taste like the Lowrider at the Slider Inn.

Following a commercial break, Hogan and Bischoff reemerge through the entrance and head to the ring. Hogan then calls Sting a “coward” yet still wants to face him. While the Memphis faithful chant “We Want Sting,” their hero repels from the ceiling and meets Hogan in the ring. Before anything transpires, Savage enters the ring to distract Sting. Hogan then nails Sting from behind. The nWo then pummels Sting, and Hogan leg-drops him to end the show. 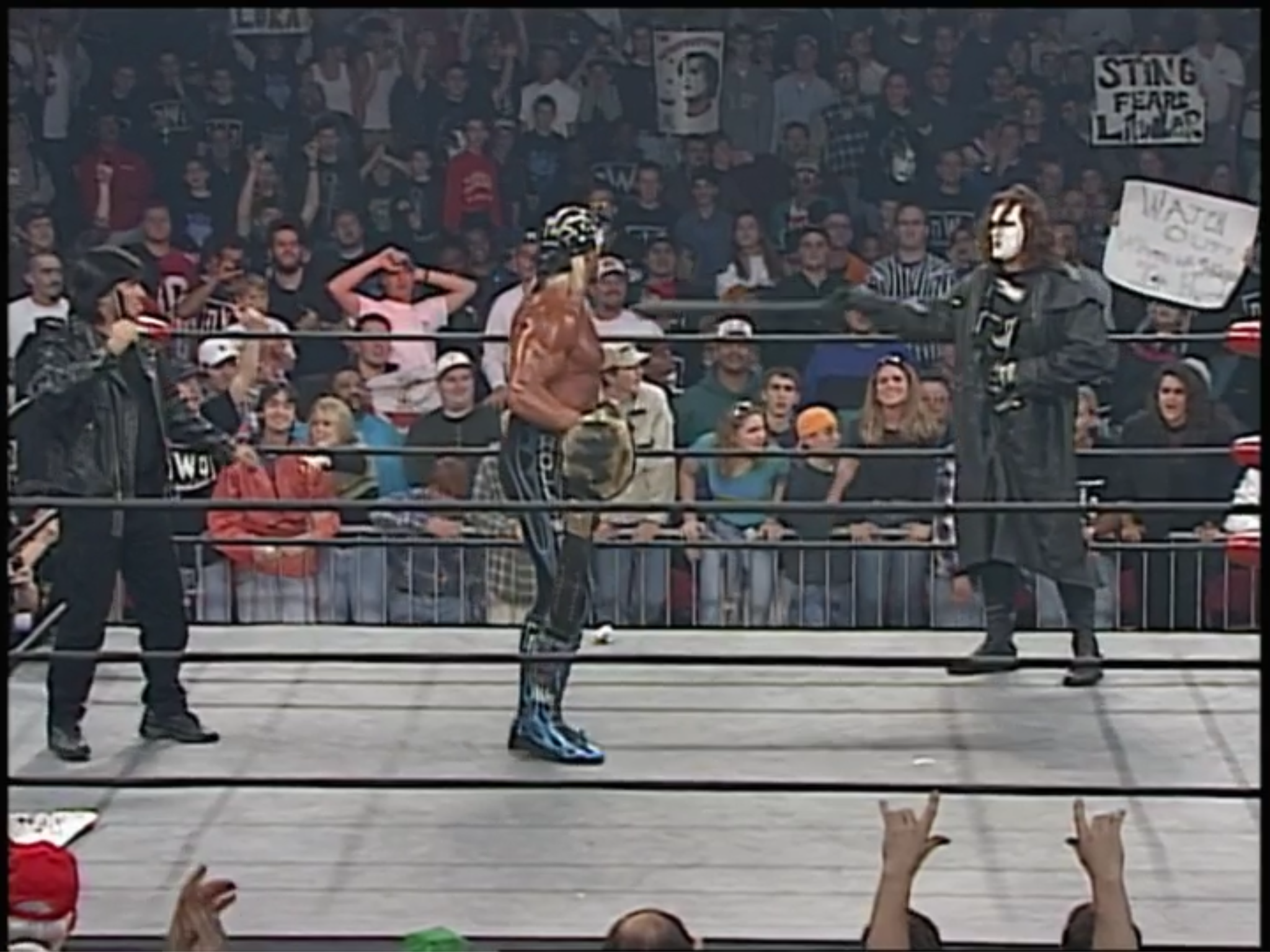 Conclusion: Although merely an afterthought, Eddie became the new Cruiserweight champion. That trumped any and all wrestling on RAW is WAR. Next, as expected, Bischoff announced Bret as the newest addition to the WCW roster albeit through creative means. WCW is rolling, and any opposition is swirling in the toilet at this point in wrestling history.